I thought I’d pop on and share a little update I’ve been working on over the last few weeks as I’ve managed to give the deck a bit of a new look for this summer in our back garden. 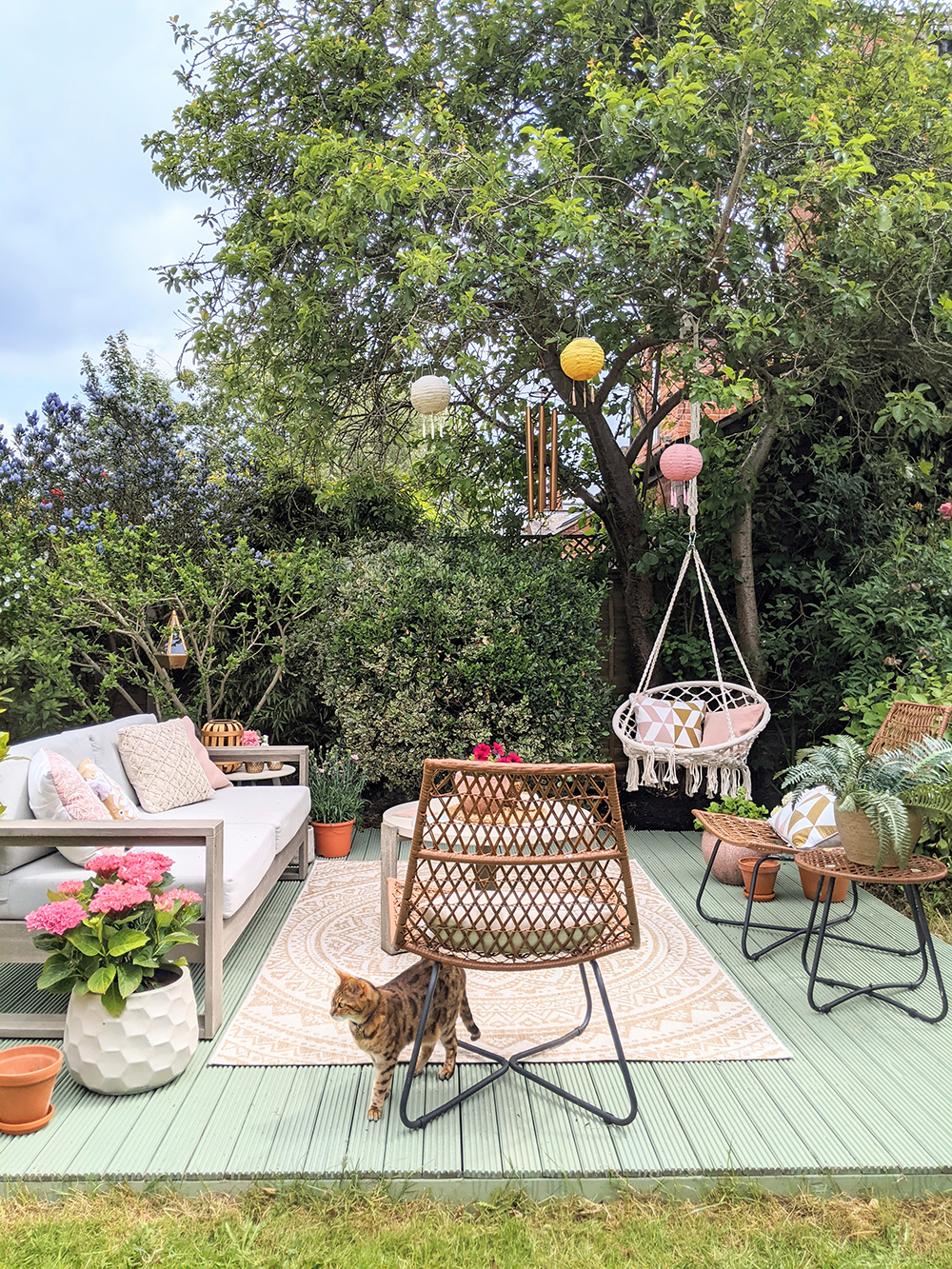 This little area has changed a few times since we’ve lived here but when we first moved in, the area was covered in concrete slabs. 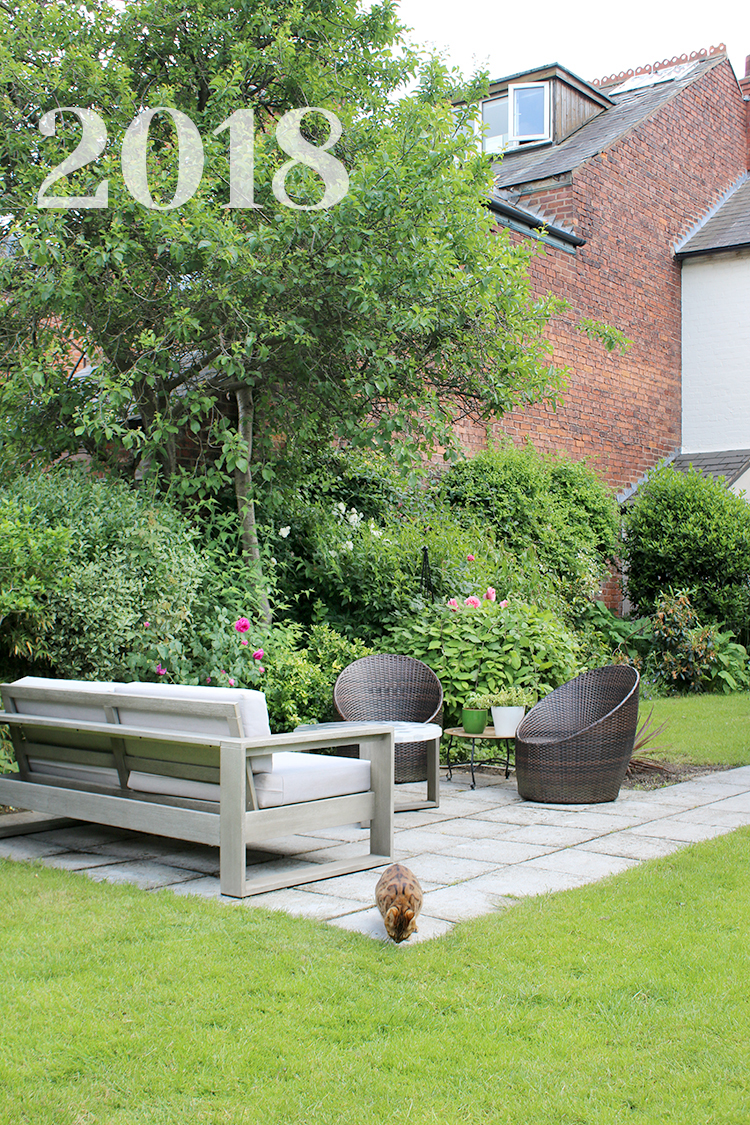 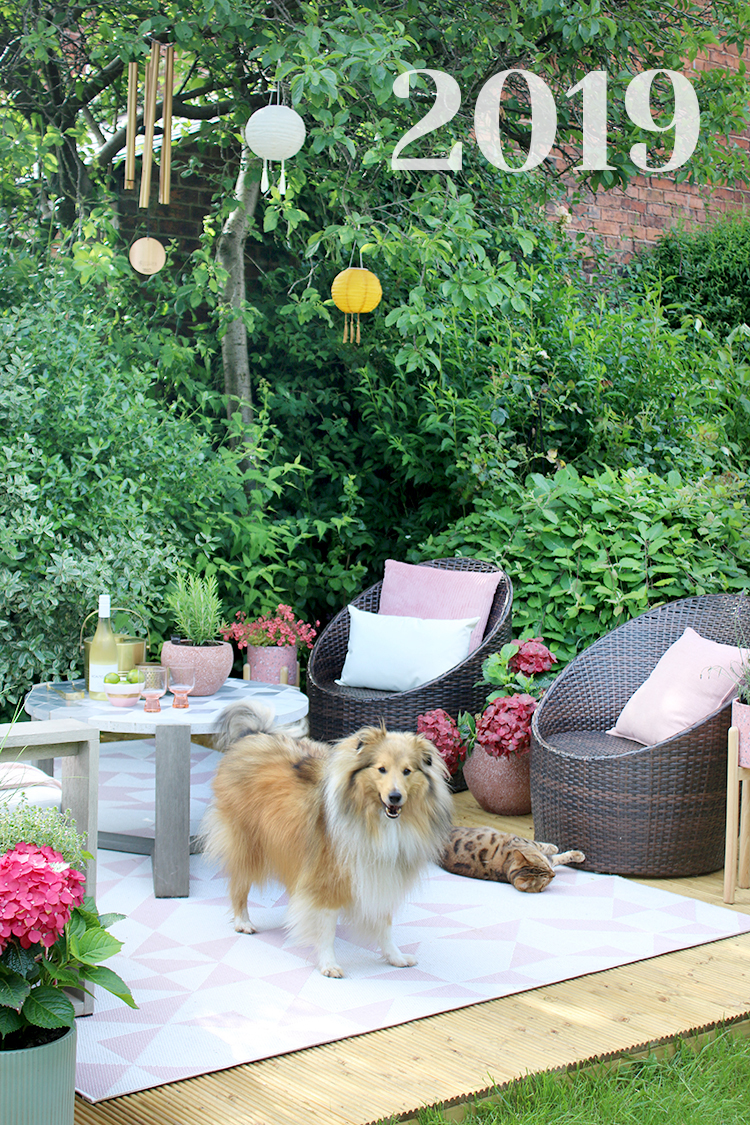 We then purchased a small deck to replace the slabs – you can see the first time I styled this area back in 2019. I decided to leave the deck in its natural state at the time with just decking oil. 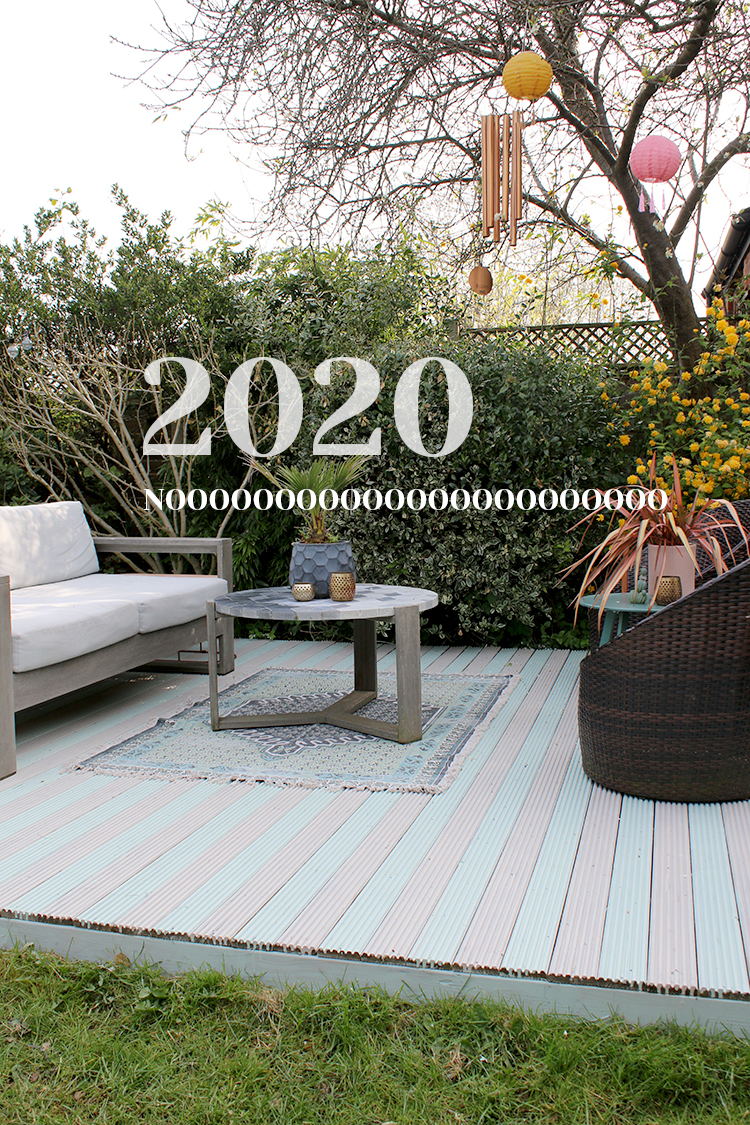 Then, the following year in 2020, the decking was looking a bit worse for wear after a long winter and I decided I’d paint it with stripes. Well, that actually went terribly – combine the fact that it was so hard to get any kind of paint online (we were in hardcore lockdown at the time and everywhere was out of stock!) with me just wanting to be able to use and enjoy our deck again so making rushed decisions and it all ended up a hilarious disaster. For context, those colours were meant to be green and cream but it came out turquoise and pink… Yeah, it was bad. You can read all about that in this post!

Full disclosure: It didn’t stay like this… I did repaint the stripes not long after this in green and cream and it was fine but honestly, I didn’t love it which was why I never ended up sharing it! However, by that point, I was in no mood to paint it for a third time in one year! ;)

This post may contain some affiliate links. You will never pay more for clicking on these links but I may earn a small commission from the brand for the referral. I have not been asked to use these links by the brands. 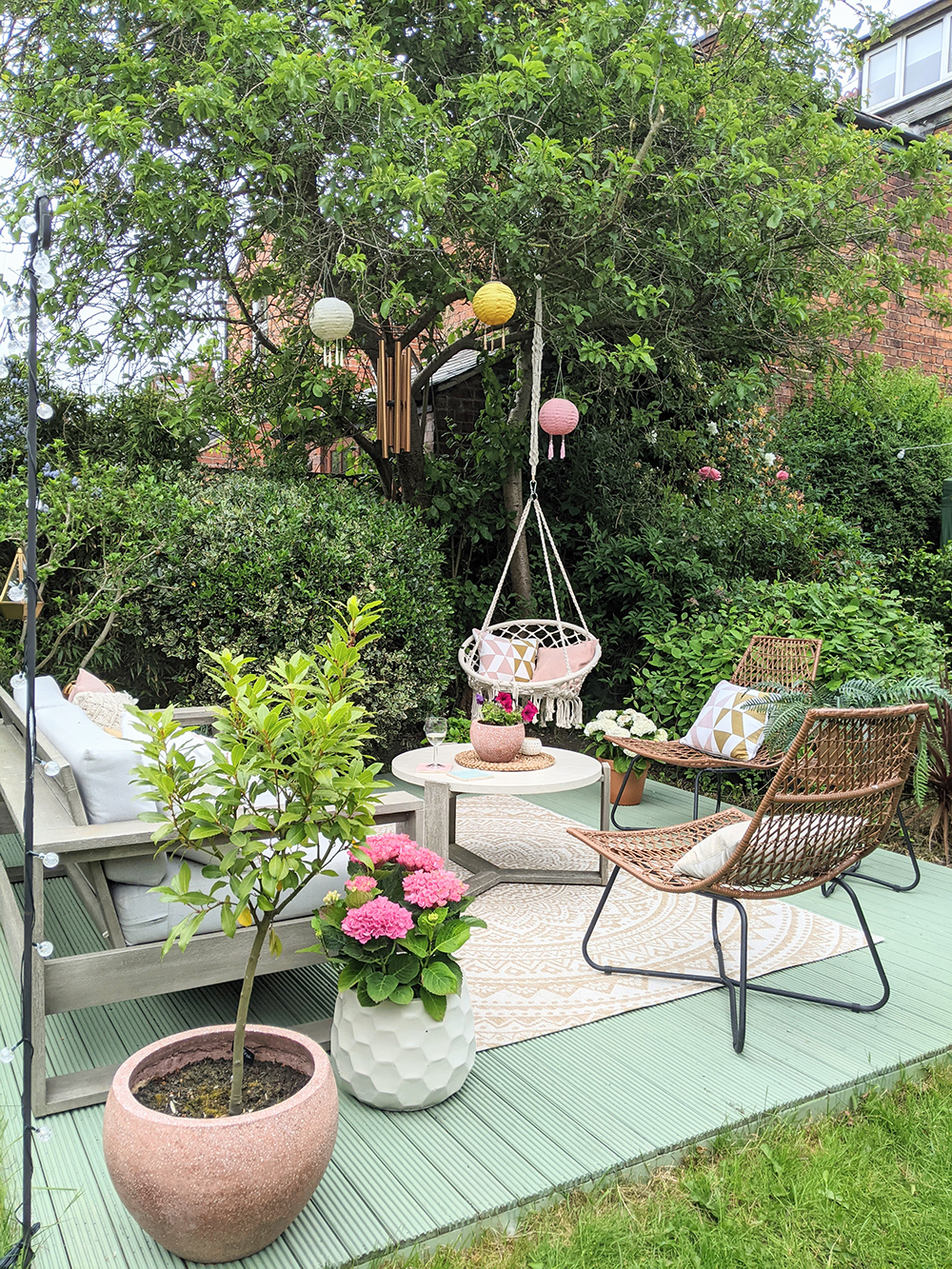 So this year I decided to just use a solid colour across the whole deck using Cuprinol’s Garden Shades in Willow, the same paint I’d used on our raised standing planters last year. It’s a nice warm sage green although it has come up a bit lighter on a horizontal surface than it did on the vertical surface of the planter. Just goes to show how much colours will change based on the way the light hits it! I do like it however and of course, I wish I had just done this last year but well, we live and learn! 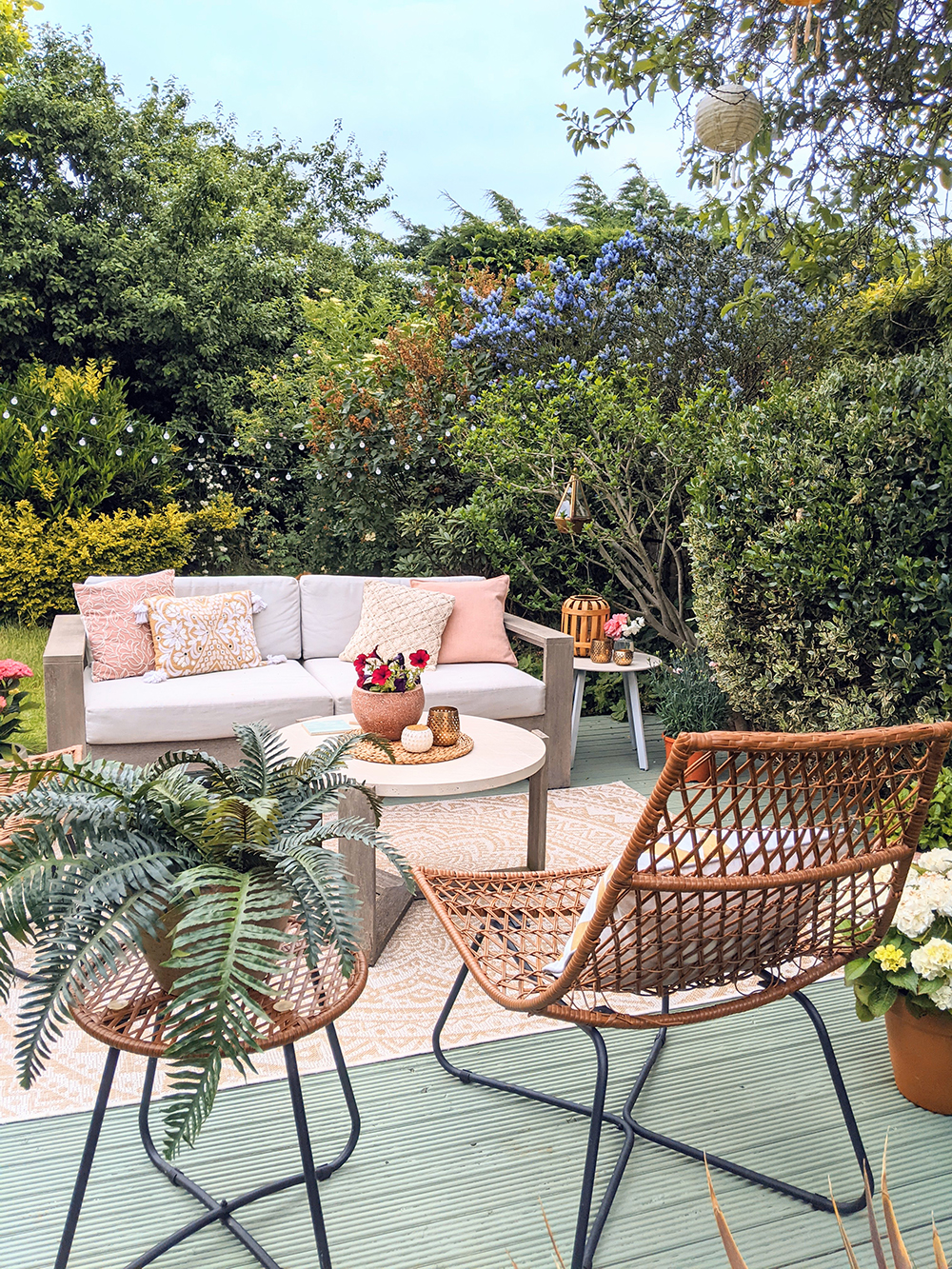 I also gave my concrete coffee table an update too. I have had this table (originally from West Elm) for four years now and the concrete pattern was starting to discolour, there were stains and marks on the surface and I had fallen out of love with it. I had considered selling it at one point but I thought I’d work with what I had. After all, the shape and style were fine, it just needed a refresh and I wasn’t feeling the greys anymore! I wanted a warmer look for this whole area so once again, I decided to reach for the paint.

I used 2 coats of Little Green Paint Company’s Down (leftover from when I painted the back of the house last year) just as a base and then once that was fully dry, I used Cuprinol’s Garden Shades in Natural Stone right over the top to give it a warmer beige colour. It seems to have held up really well over the last couple of weeks and I’ve fallen in love with it all over again!

I’m so much happier with it now as you can still see the lovely hex pattern but it’s so much more subtle now and works with the colours I’ve used in the rest of the space. 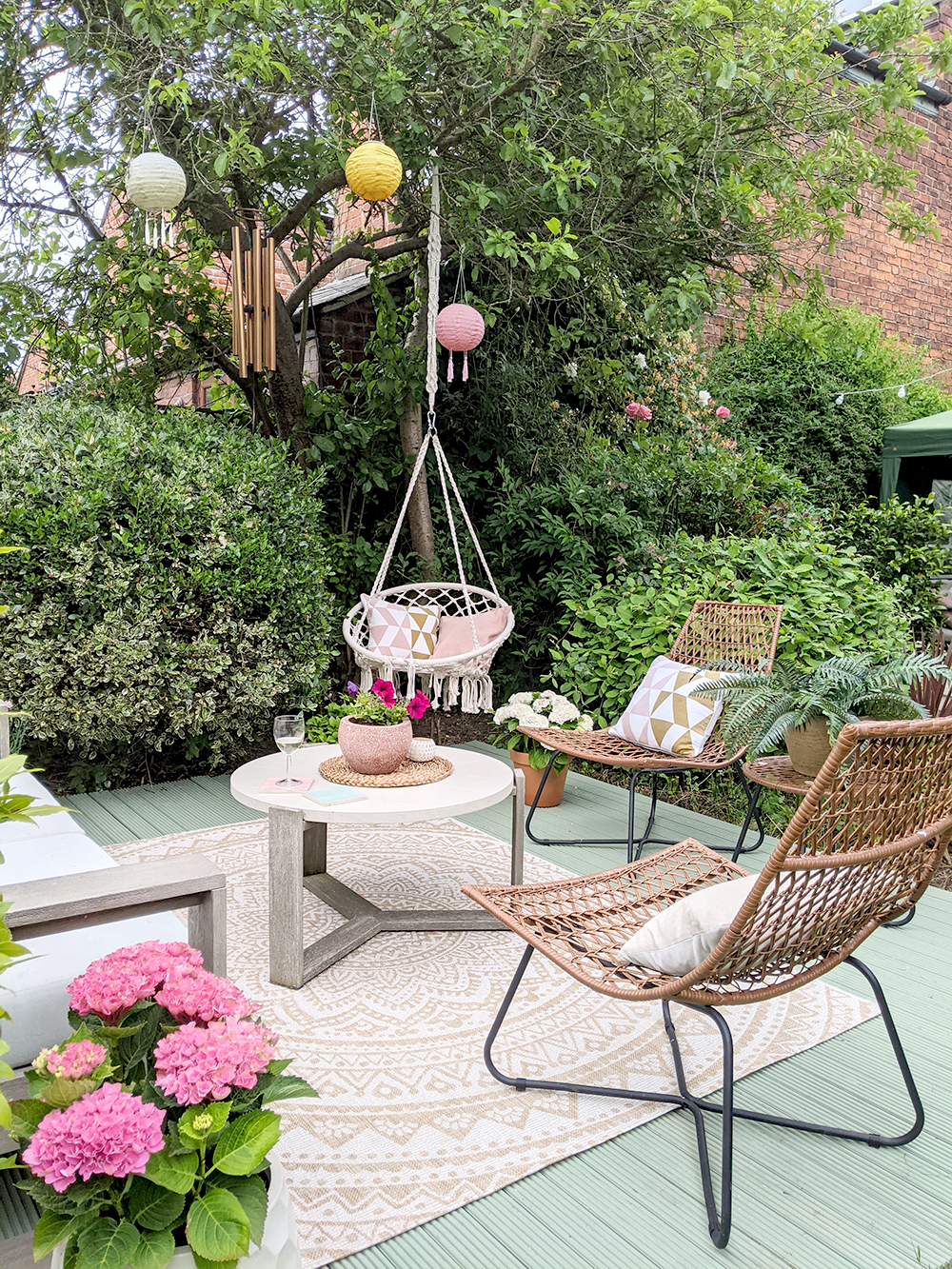 I also pulled the rug from my recent utility room makeover and moved it to the deck just to see how I felt about it! It’s an indoor-outdoor rug so it’s been perfectly fine out here (we’ve had a few rain showers, it dries really quickly as it’s made with polypropylene) but I have just recently replaced it with a much larger one also from Benuta (it came in just a few days after I took these pictures!).

I couldn’t be more pleased with the quality of Benuta’s outdoors rugs for the prices and they seem to stand up quite well outdoors so far – just a quick sweep is all that’s needed and they wash really easily too. (and nope, not an ad, I bought them myself!) I might actually have to purchase a third one now for the kitchen! ;) 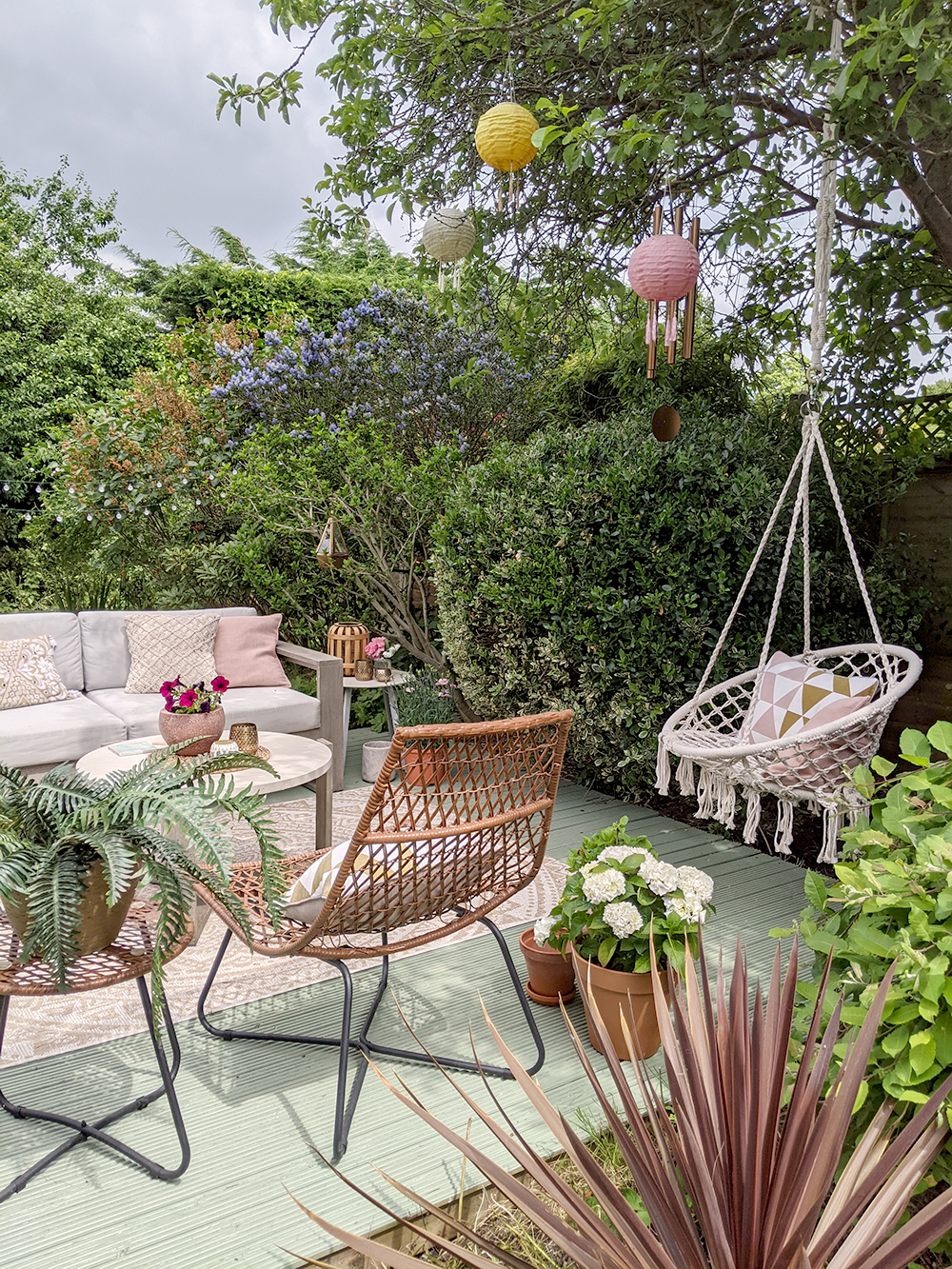 The last thing I purchased for this space is that little macrame hanging chair. I adore the look of these hanging chairs and this one was an absolute bargain from Aldi for just £40! Of course, I’ll take it inside when it rains (it literally is just a little hook that comes undone and it collapses on itself for easy storage).

However, I will say that the branch we hung it on is actually not strong enough to sit in so it’s just for show for now (#keepingitreal)! Ha! I am going to need to purchase a frame for it to go on, I just haven’t gotten around to purchasing one yet!

I rearranged some of the seating too, using my rattan style chairs to create a little conversation area. I’ve had these for a couple of years now too but I love that they add that bit of warmth and a little of that boho vibe I was after out here. And I also had to replace the solar lights as they’d given up the ghost and I got these ones instead which I actually prefer!

Everything was finished off with a few new flowers although I’ll probably purchase a few more as I still have empty pots to fill! So it’s all a bit of a work in progress as you can see but I’m pretty happy with the overall look and feel here so far. 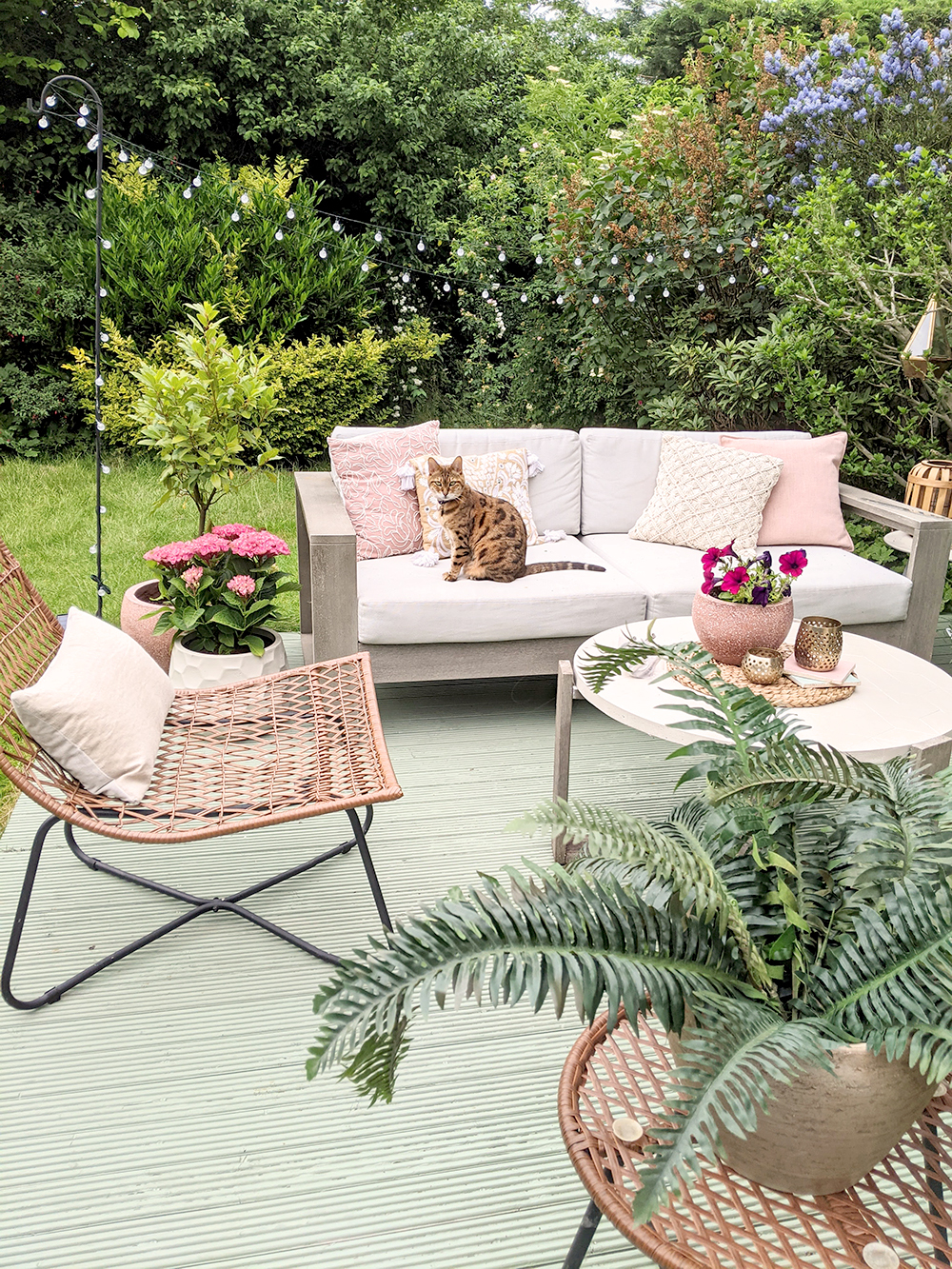 As an aside, we’ve been working hard to tame this very mature garden we inherited! It had grown into practically a wilderness over the last few months and we’ve removed a few larger plants and bushes. I cleared the entire area around the bottom of the pear tree (where the hanging chair is hung) and we’re currently making our way along that entire side of the garden, trying to make some sense of the planting! We removed an old apple tree (it was literally growing sideways!) and a pear tree that was growing through our Acer. Note to anyone planting trees in their garden: At some point they are going to be full size so make sure you leave plenty of room between your trees, not 3 or 4 feet like previous owners of our home have done!

I think it’s taken us a full three years to finally feel comfortable enough to know what to edit out of this space and what to leave! The planting has been so haphazard over the many years this home has been here (it was built in 1889) so whilst our last home, we were basically starting from scratch, on this one, it’s entirely the other end of the spectrum! The last thing I want to do is rip everything out as there are some really lovely plants here, they are just getting suffocated, so we’re trying to be really considered about how we approach it all. At some point, I’ll update you how we managed to tackle it but until then, wish us luck! It’s a long-term kind of project but getting this little deck in order and the area just to the side of it has been a good first step!

I’d love to know what you think of this little area now and if you have any plans for your own updates in your garden this year? Do let me know in the comments!