How I’ve Styled My Blush Pink Master Bedroom (for now)

As you are probably aware by now, we moved into our home just over 3 weeks ago. It doesn’t seem that long, really, seeing as I have only just cleared the last of the boxes (well, mostly – we still have lighting to go but I’m not unpacking that just yet for reasons which I’ll explain soon). Basically, I just wanted to unpack, settle in and see where the various pieces and accessories I already own will go before I start making sweeping changes. And sweeping changes are in order, of course, but there are a few rooms that are kind of low on the priority list so I just want to make them as liveable as possible until we can get around to ticking them off the list. 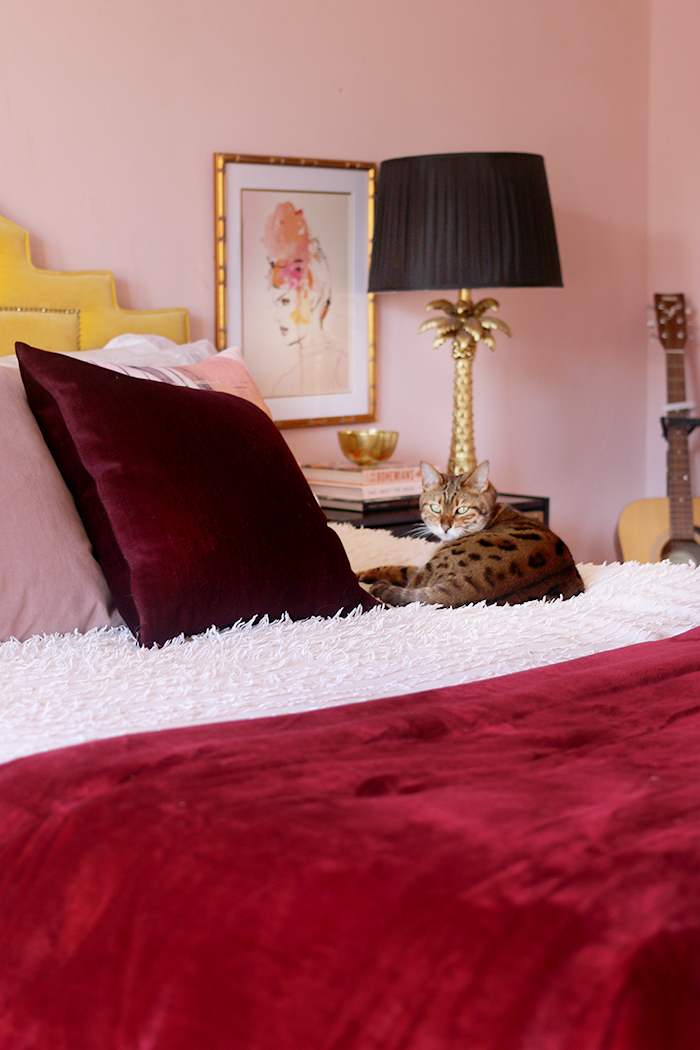 One of the rooms I’m actually pretty damn happy about in terms of the existing decor is our master bedroom. I’m nearly positive the room was painted in Farrow & Ball’s Calamine by the previous owners, a soft warm peachy pink that envelopes the room in its glow. Now, Wayne is not a huge fan of the colour pink and I know that he’d have never in a million years let me use this colour on the walls so the fact that it’s already here is kind of a happy accident (for me – not for Wayne of course). And essentially, seeing as I am the one who does 90% of the painting around here, it’s pretty low on my priority list to repaint and decorate. So for now, I’m working with it and well, I’m not even mad. 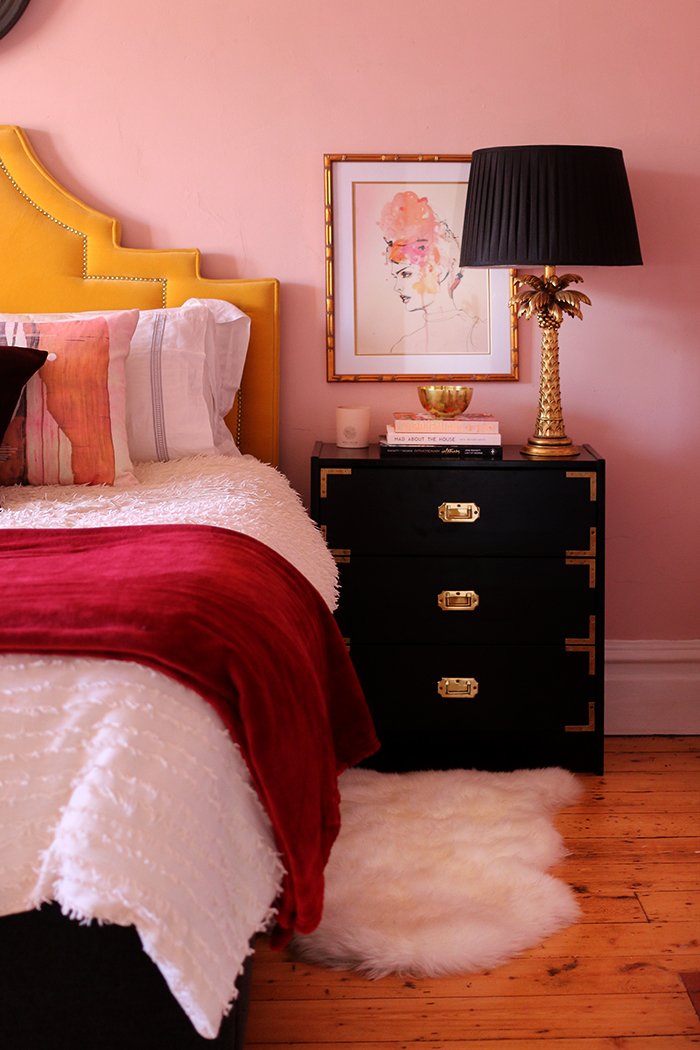 I talked earlier about how much I am still loving blush (you can catch up on my thoughts here) and while I realise it’s a big trend, I’m just not ready to let it go easily. I have recently become pretty enamoured with the combination of pinks, peaches and burgundy alongside gold accents and so I saw this room as my opportunity to have a little fun with this palette. 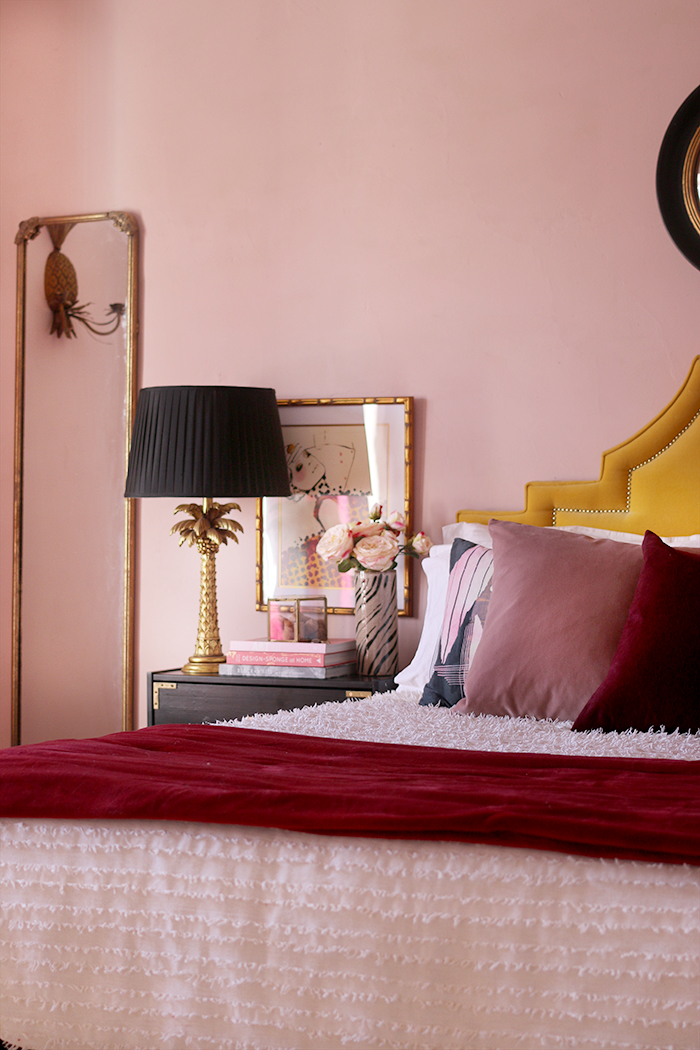 Once again, there’s really not much in terms of new items in this room. If you’ve followed my blog for a while or are familiar with our old house, you’ll likely recognise pretty much everything in here. Packing up a whole house made me realise just how much stuff I actually own so it was always my intention to use what I already had as much as possible – at least to start off with. This house is bigger than our last so I was always going to need a few things anyway but I wanted to take my time and only bring in new things that I really need. 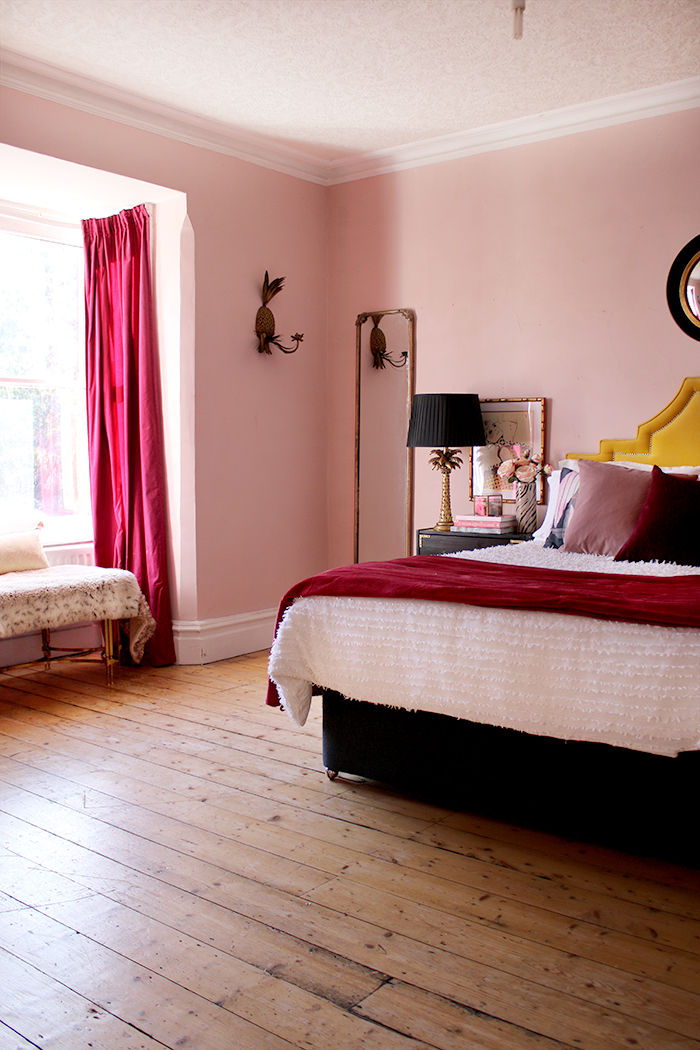 The curtains you might recognise from my old living room and the mirror in the corner was in my dressing room in our last house. However, this is quite a good size space – bigger than what I’m used to – and strangely, I’ve found it nearly as challenging as any small space. I feel like I might need a bit more in here although I’m resisting the urge to simply fill it up with stuff for the sake of it. The vintage coffee-table-turned-posh-cat-bed has been moved into the bay window but I’m thinking my small yellow sofa in the living room would actually look rather nice there instead. 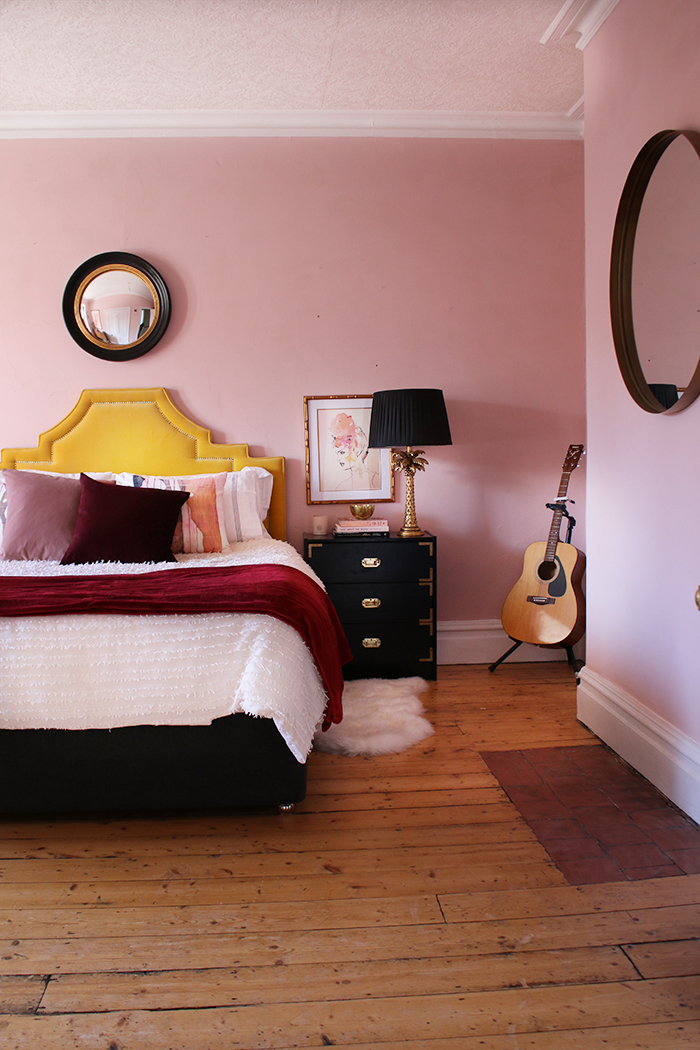 I would also have the space for a bench at the end of the bed and a rug would probably be nice as well but I am holding back just a bit for the time being while we sort out the rest of the house! 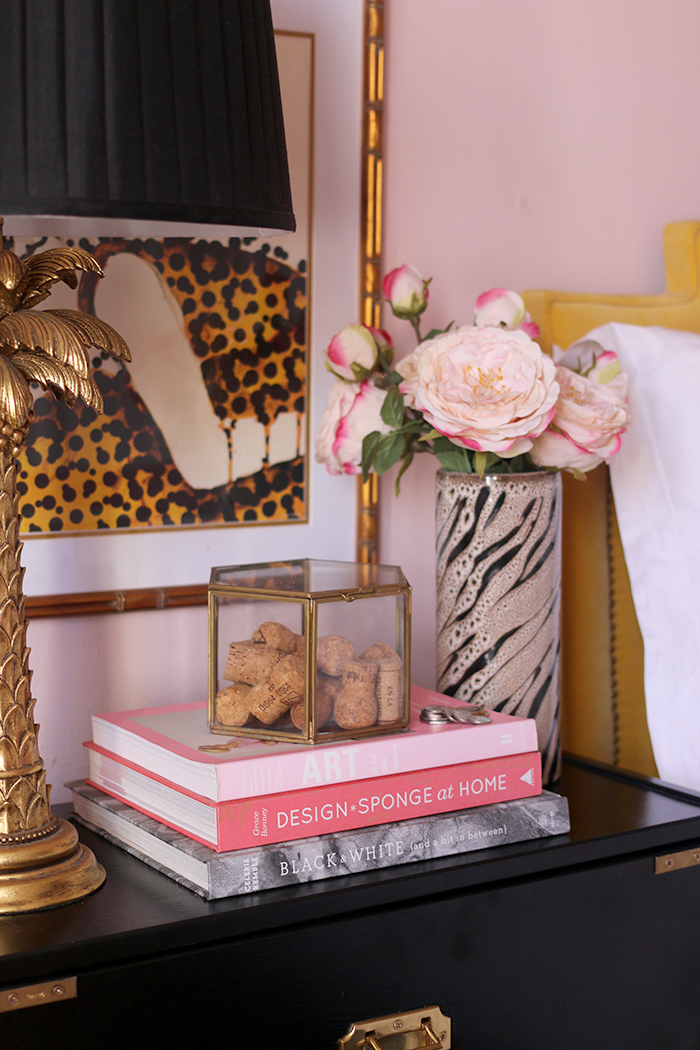 Of course, some of my favourite prints have landed in this room – the Leigh Viner prints are currently gracing each of the bedside tables. And as seen below, my beloved Maria by Gina Julian is now watching over us from above the vintage chest of drawers. 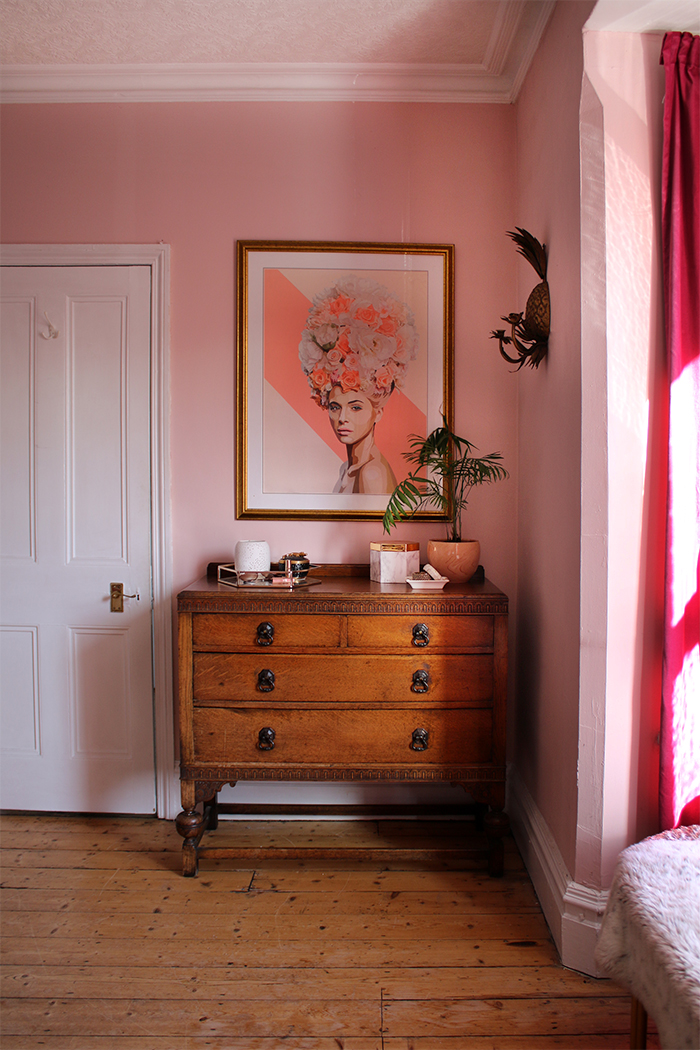 Of course, I imagine things will continually change around here. The only thing I picked up for the room was a deep red coverlet for the bed but I’m not entirely convinced it will be permanent in here as I’d love a thick velvet one instead of just a throw and one that reads more burgundy than red. 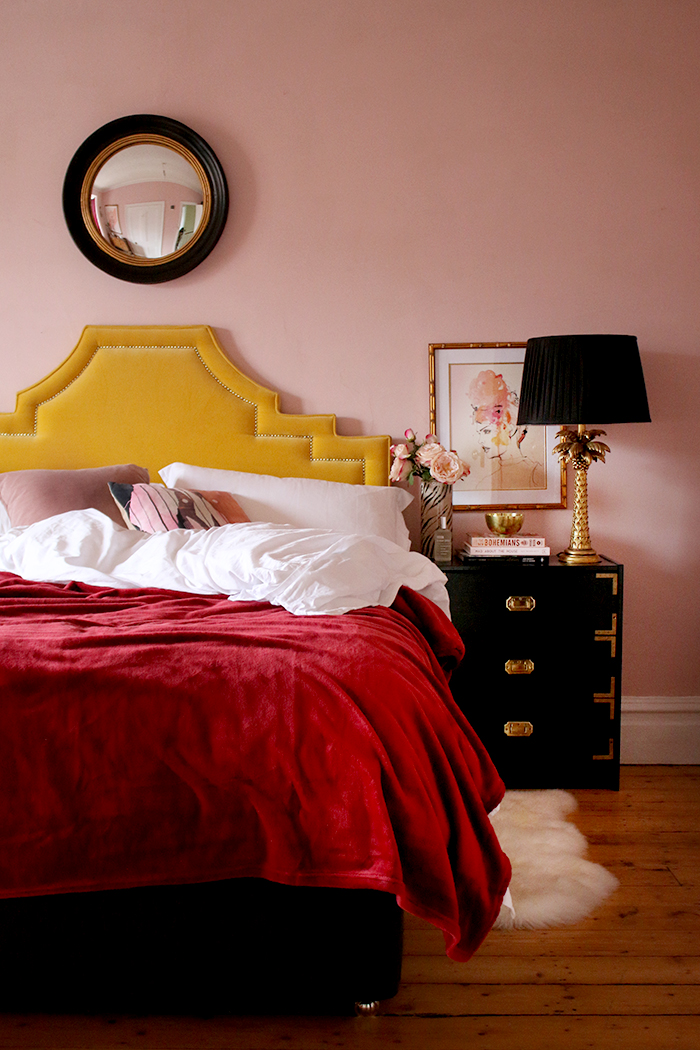 It’s still rather cosy. Above, it was paired with white bedding. I just snapped that picture a few days after the ones above were taken because it just looked so damn cosy with the bed not quite made yet but it’s nice that I can be a little more versatile with the linens in here. 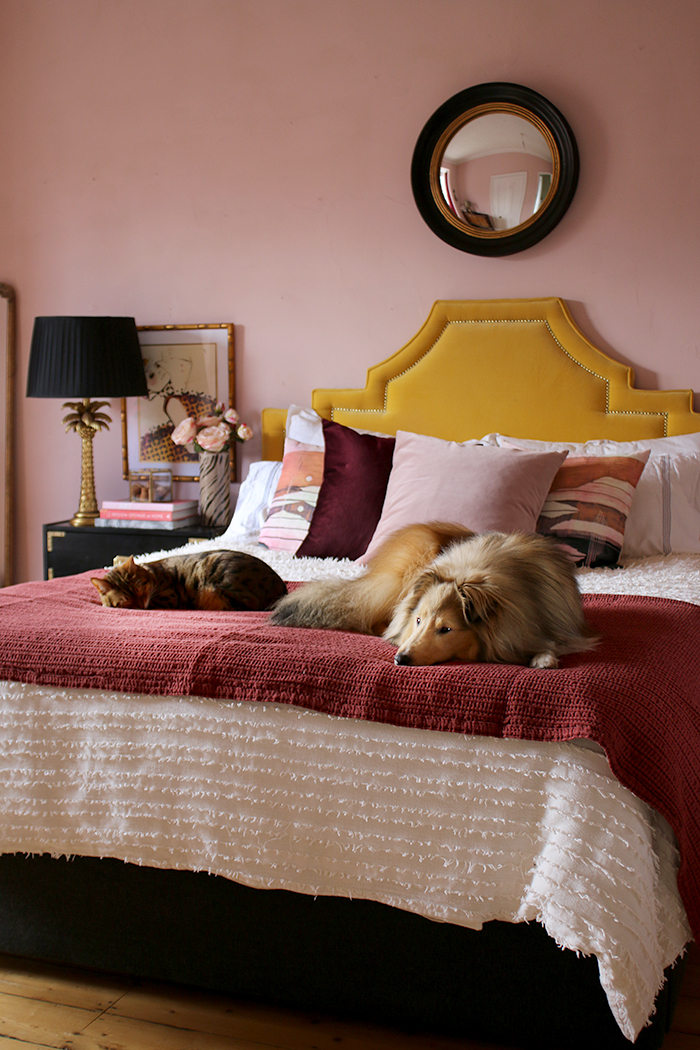 And that’s the throw I originally tried on the bed – I liked the colour but didn’t like the knitted texture with everything else so it got swapped out. But Meisha and Quito looked so cute that I wanted to share anyway! #proudfurbabymum 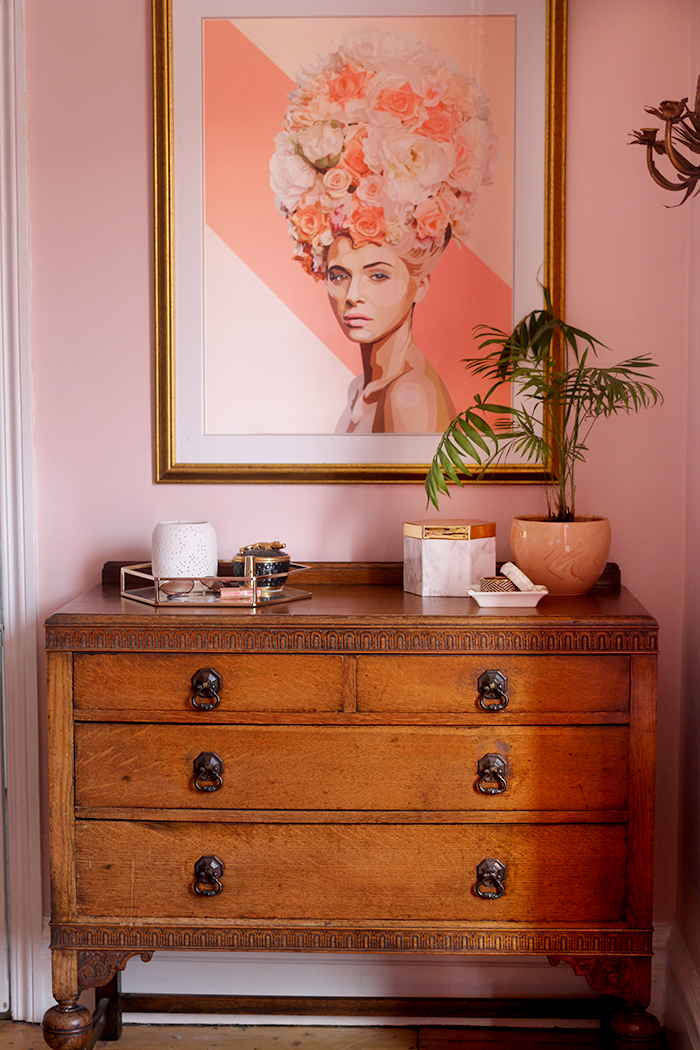 So that’s the bedroom for the time being! Let me know what you think about the styling! Of course, I have some plans on what I’d like in here eventually (including a new bed and a wall mural) but I’ll be sharing those plans with you in time so lots more to come, I promise! In the meantime, is this a colour palette you would have in your home? How have you decorated a larger bedroom? I’d love to hear your own tips!