The 6 Best Renovation Decisions We’ve Made So Far

As of the end of March, we had lived in our home in Shrewsbury for 2 years and while we haven’t actually done as much work to our home as I’d have liked this year due to world events, I wanted to chat about the things we have managed to complete that have had the biggest impact on how we use our home up to this point. 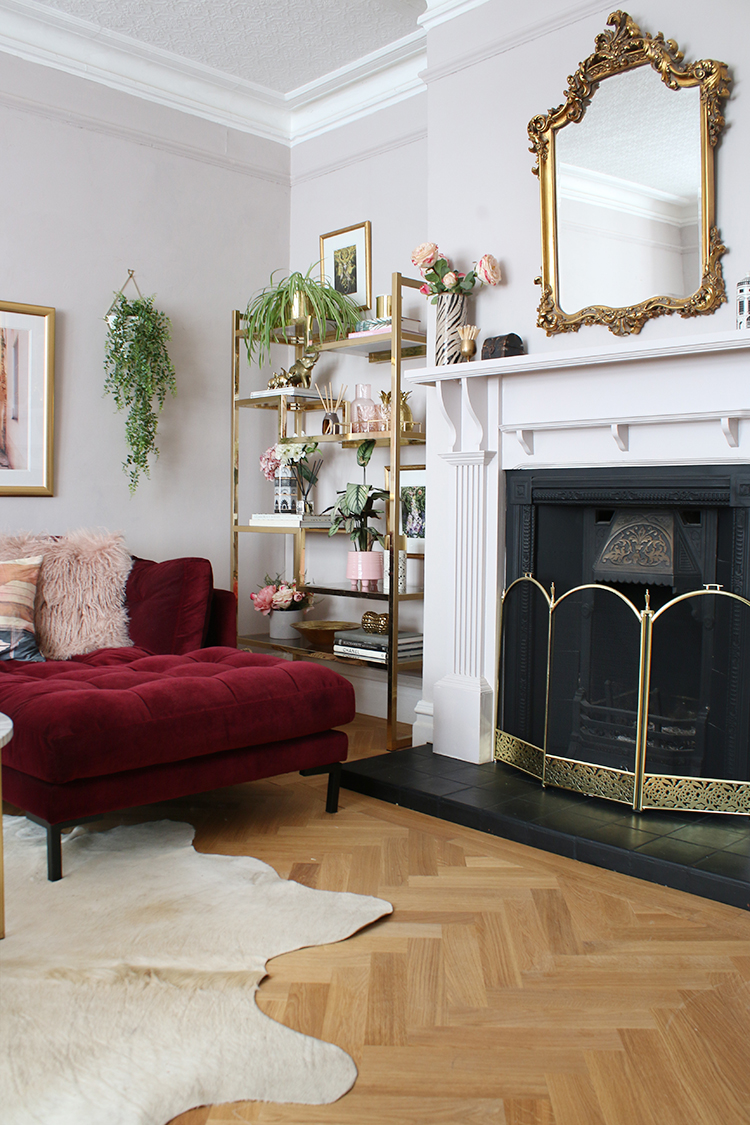 It’s tough trying to decide your priorities when you first start a renovation project. Our home is on two floors, we have four bedrooms (two of which are used as offices/dressing rooms), a family bathroom and a tiny ‘jack n’ jill’ room upstairs (used as my vanity area), a living room, dining room, kitchen, utility (what was the old kitchen) and mudroom downstairs, a rather large unfinished cellar and a decent sized unfinished loft and of course hallways and a stairwell. Then there are the front and back of the house and a decent sized back garden.

When we moved in, there wasn’t an inch of this house that didn’t need attention. And well, we don’t have endless budgets or time on our hands so we’re just trying to get done what we can as we go. This was always going to be a long-term project for us and as nice as it might be to fantasise about moving out for 6 months, getting all the work done and moving into a totally renovated property, that’s just not an option for us.

And to be honest, I’m not sure that’s what I’d want anyway. I do enjoy the process and taking time making decisions. I will get excited by one project and then get distracted and start planning the next. I change my mind almost daily as to what we should work on and what needs doing. 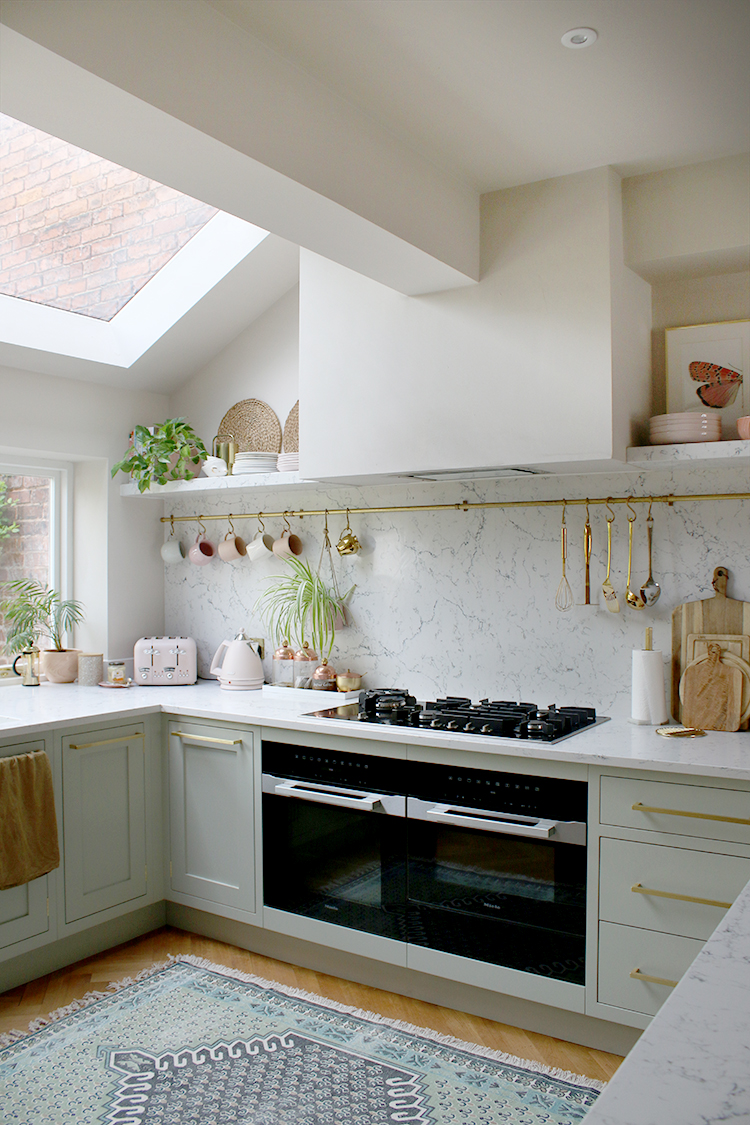 So despite what you may see on my blog or over on my Instagram feed, there are still a LOT of areas that need attention with varying degrees of work involved. On my current hitlist is the mudroom, the hallway, my office and Wayne’s office and of course, the plans for converting our old kitchen into a utility room and a bathroom. There’s no way we’ll get all that done over the next few months but one can plan and dream!!

Anyway, I wanted to explain all that because clearly we aren’t done yet so talking about my favourite renovations at this early stage implies we are nearing the end and we certainly aren’t even close to that. But there are a few things that we’ve done so far that I am SO happy we have tackled over the last couple of years we’ve lived here so I figured it might be helpful to chat about those in case you are staring down a really long renovation project yourself. 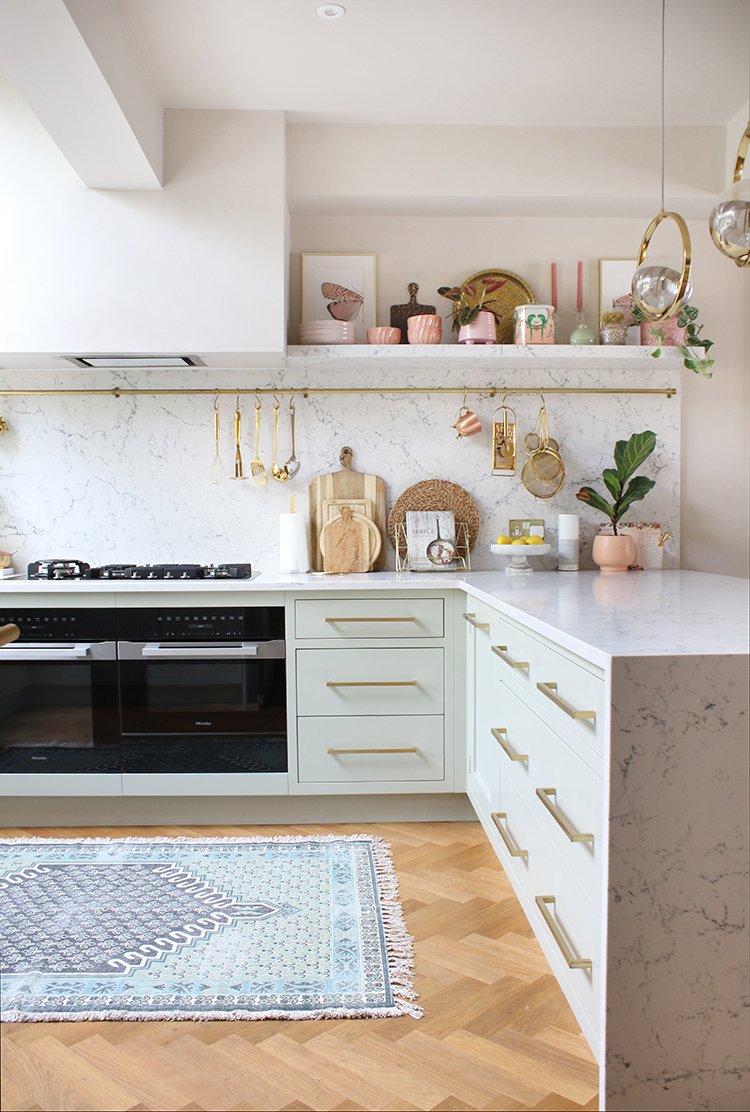 Of course, this is going to be number one on the list. Borrowing just a tiny bit of space from outside and moving the kitchen from one side of the house to the other was absolutely the best thing for us to start off with. Previously on this side of the house was the utility room and a tiny horrible bathroom and we realised rather early on that bizarrely, the utility room had the best views of the garden and the existing kitchen had the worst. 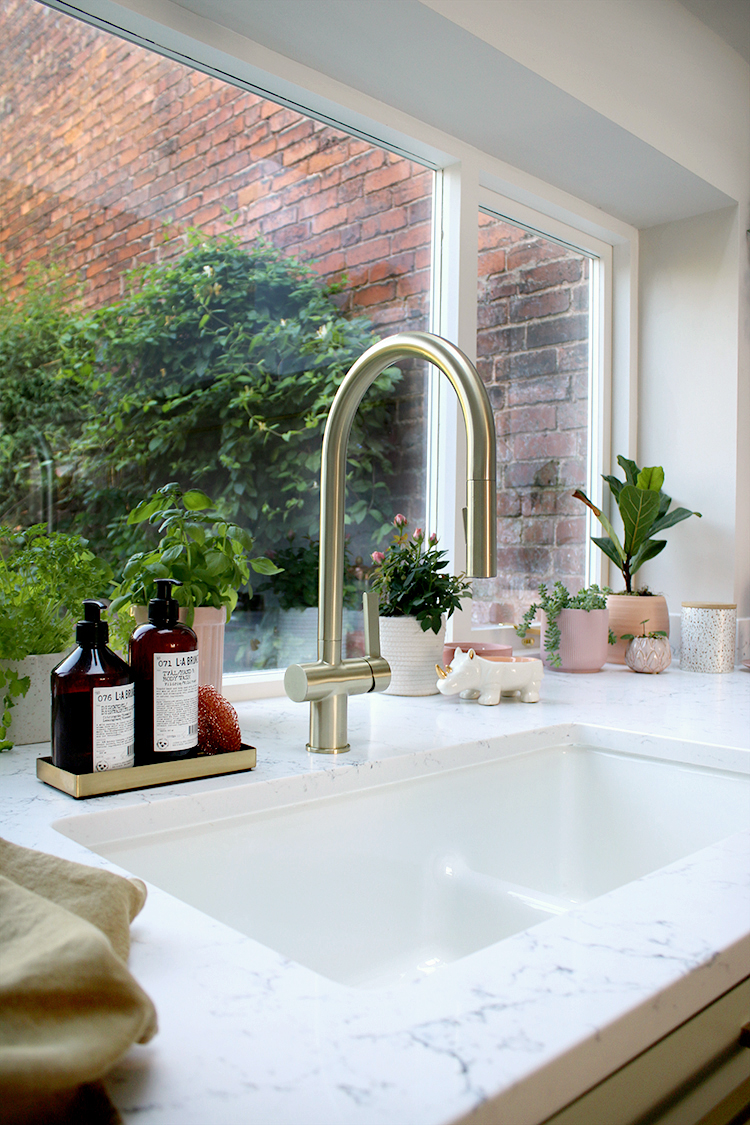 It was a huge project lasting many months last year (we started in March 2019, finished in September 2019) but being able to look out onto the garden from this new vantage point made us wonder why it’d never been done before. 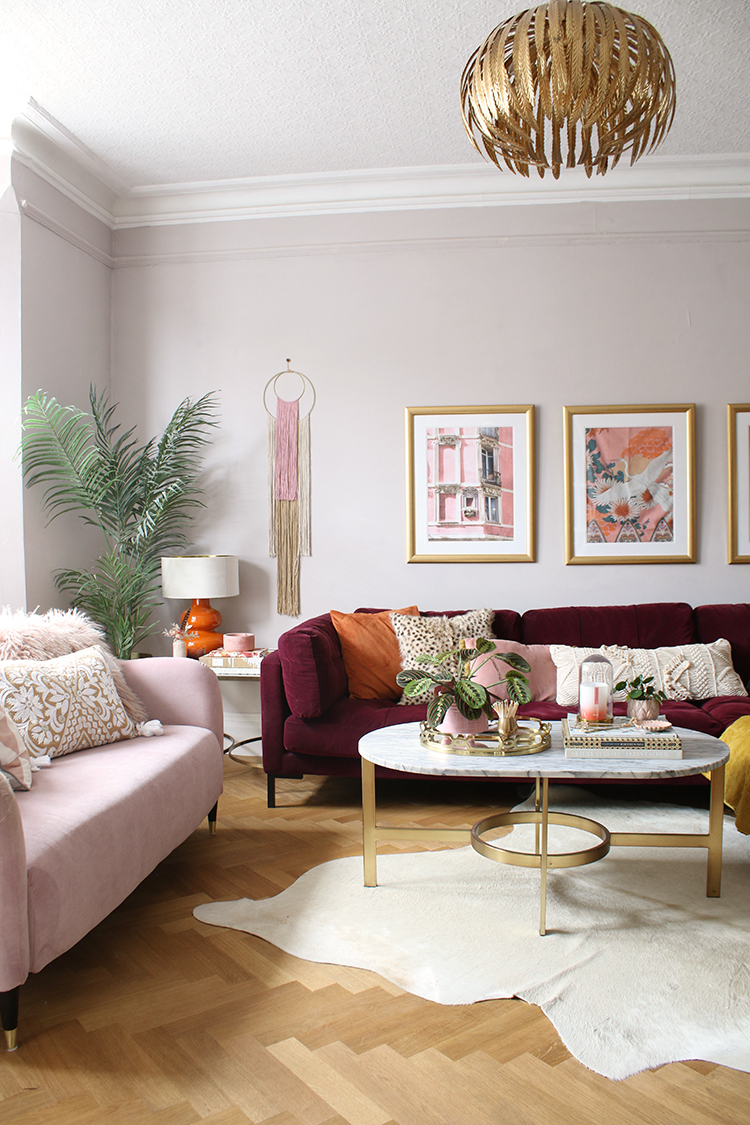 Changing the flooring throughout these rooms which were a mixture of carpet and vinyl gave the whole house a fresh clean look and unified it with the beautiful original parquet that was in the hallway. While the parquet in the hallway still needs attention (we need to sand it down, patch some areas and re-seal it), I love how much warmth it adds to the house. 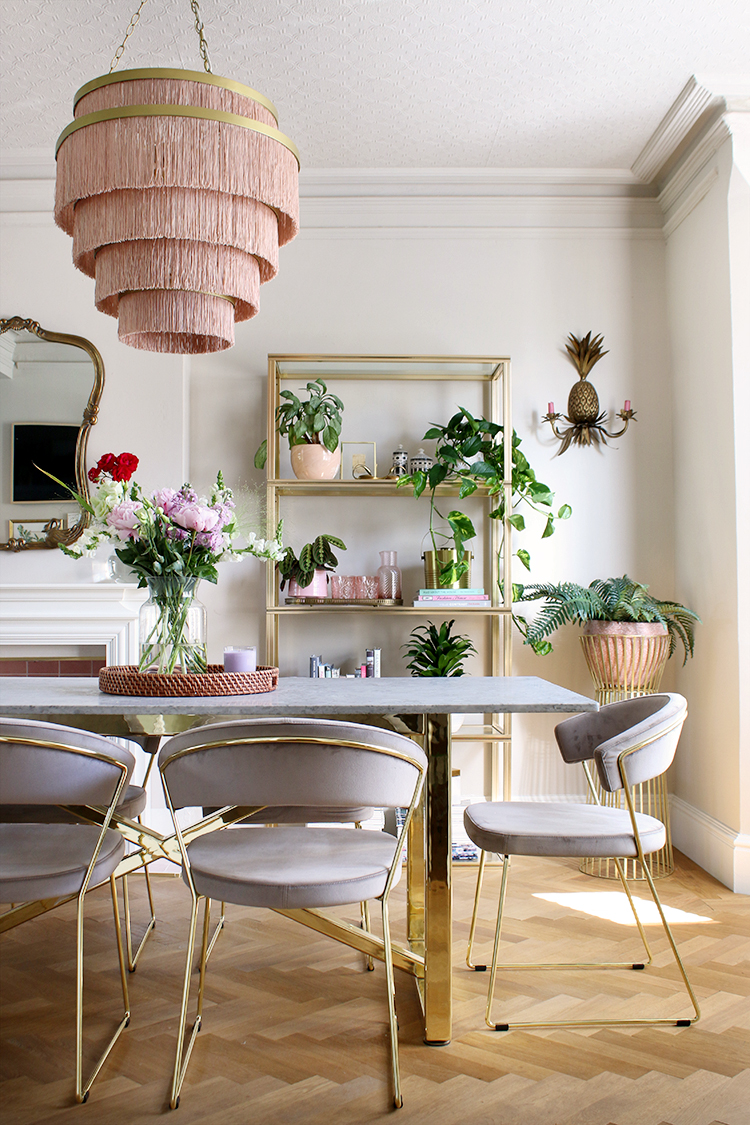 I think flooring is such an important step and it’s always best to do it early on in your renovation as it’s not the kind of thing that’s easy to do after the fact. While the kitchen was still waiting to be installed, we tackled the living room flooring and I don’t regret striking while the iron was hot even though it meant the entire downstairs at the time was in upheaval. Totally worth it.

Getting Window Shutters for the Two Bay Windows 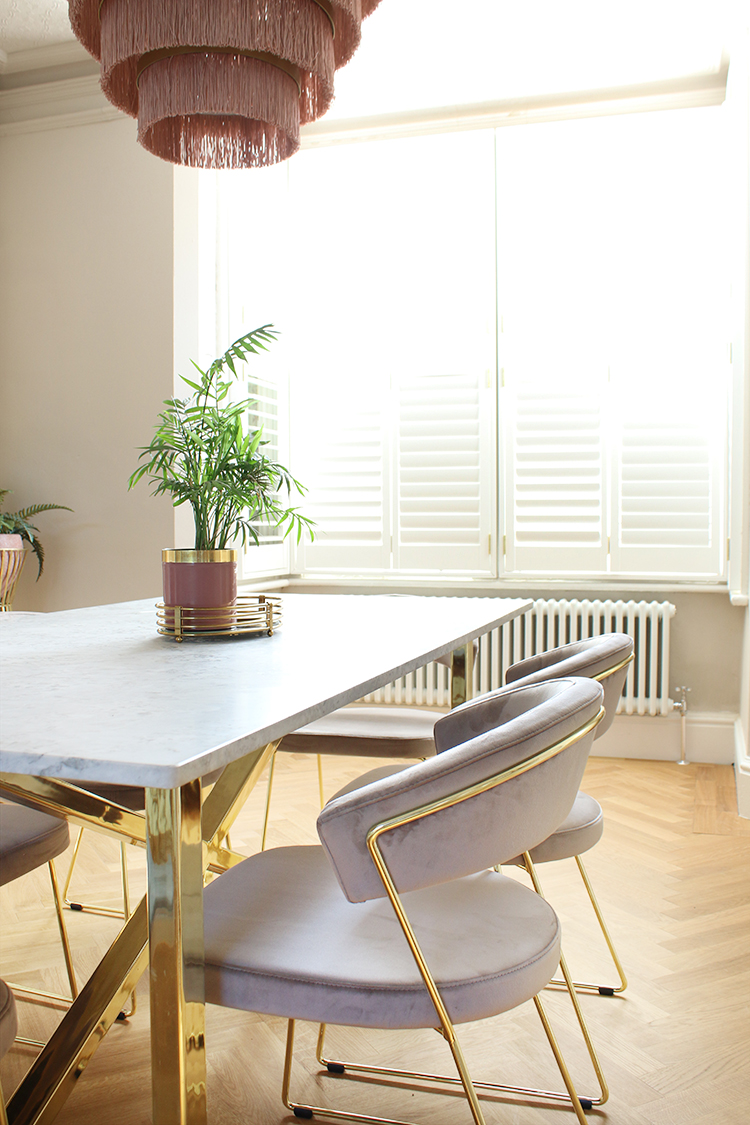 I’ve always been a little in love with bay windows and moving into this house with three of them (living room, dining room and the master bedroom) was a dream come true. But figuring out how to dress bay windows is always a little tricky – do you go with tracks, three-piece curtain poles, roman blinds, normal blinds, full-length curtains, window film, something else? Choosing to go for window shutters in both of these spaces took all that decision making away. 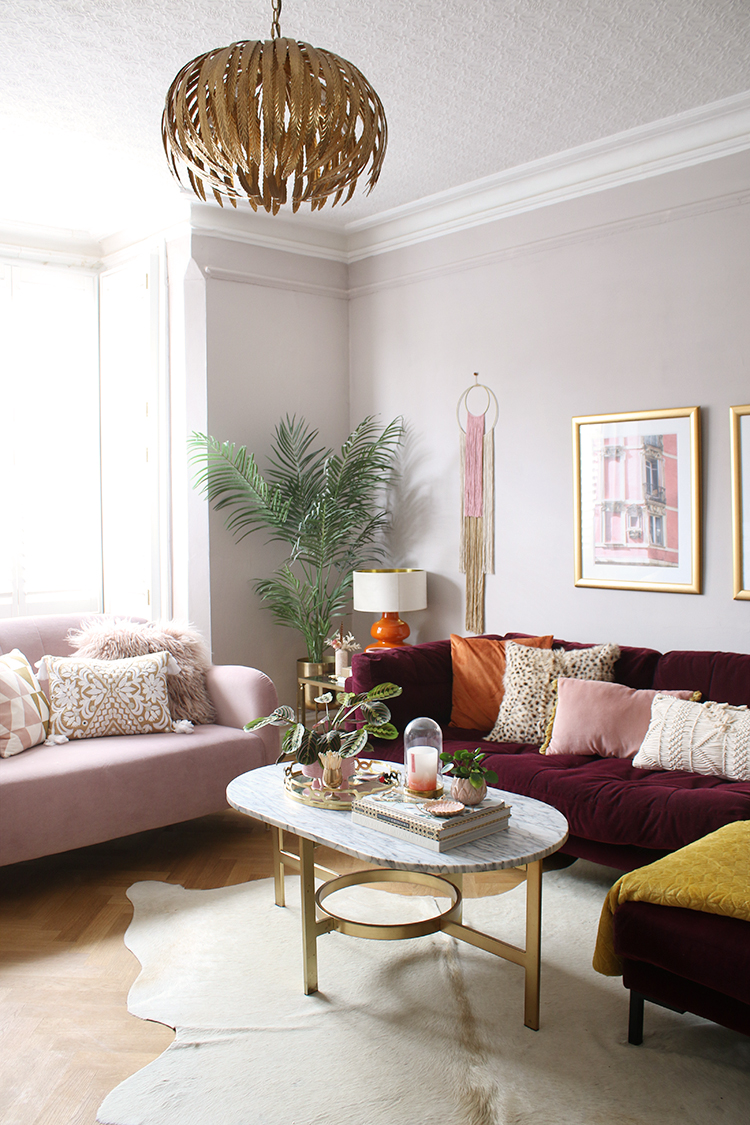 I love the clean look of them, I love how easy it is to adjust them to let in more light or to close the blinds on the bottom to allow for more privacy. I love how well they work with the age of the property. I want to get another one for the bay in our bedroom upstairs now! (The only thing I don’t love is how difficult I find it to take decent pictures of them! ;)) 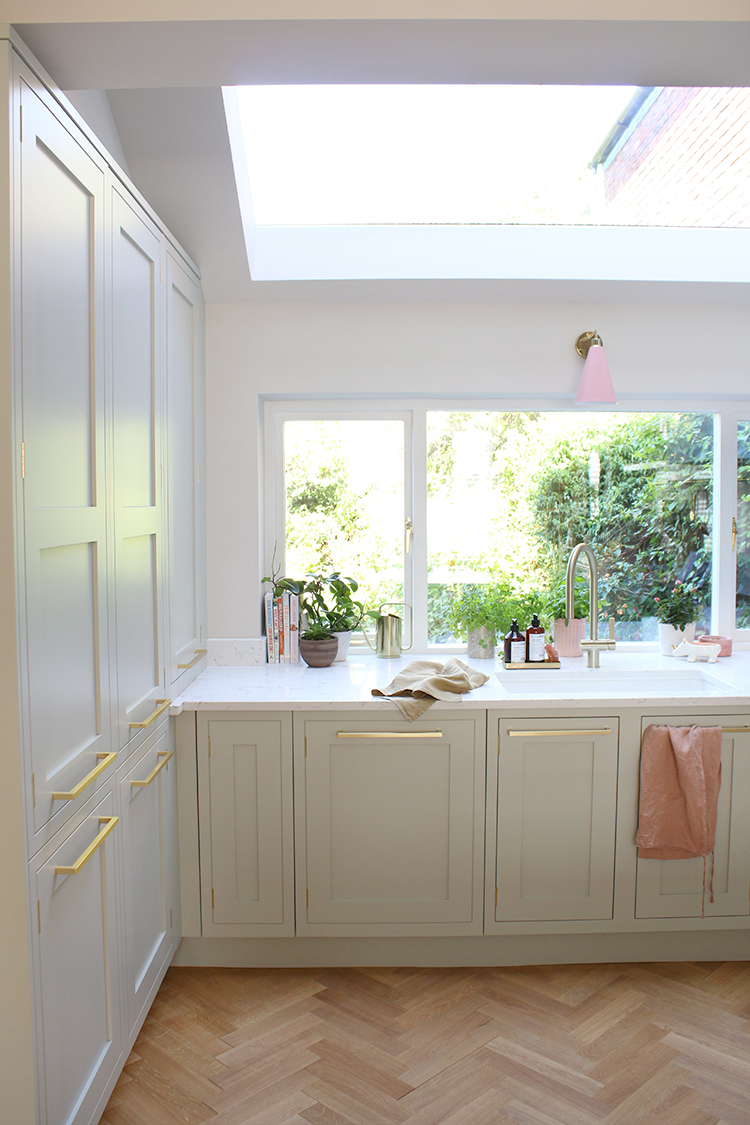 I’m back to the kitchen again and considering the kitchen faces north, putting a huge roof light in the ceiling during the building work is right up there with the best decisions we’ve made so far. It means that the kitchen is always a bright lovely space, even on the rainiest dullest days. In fact, it probably gets the best light in the whole house. 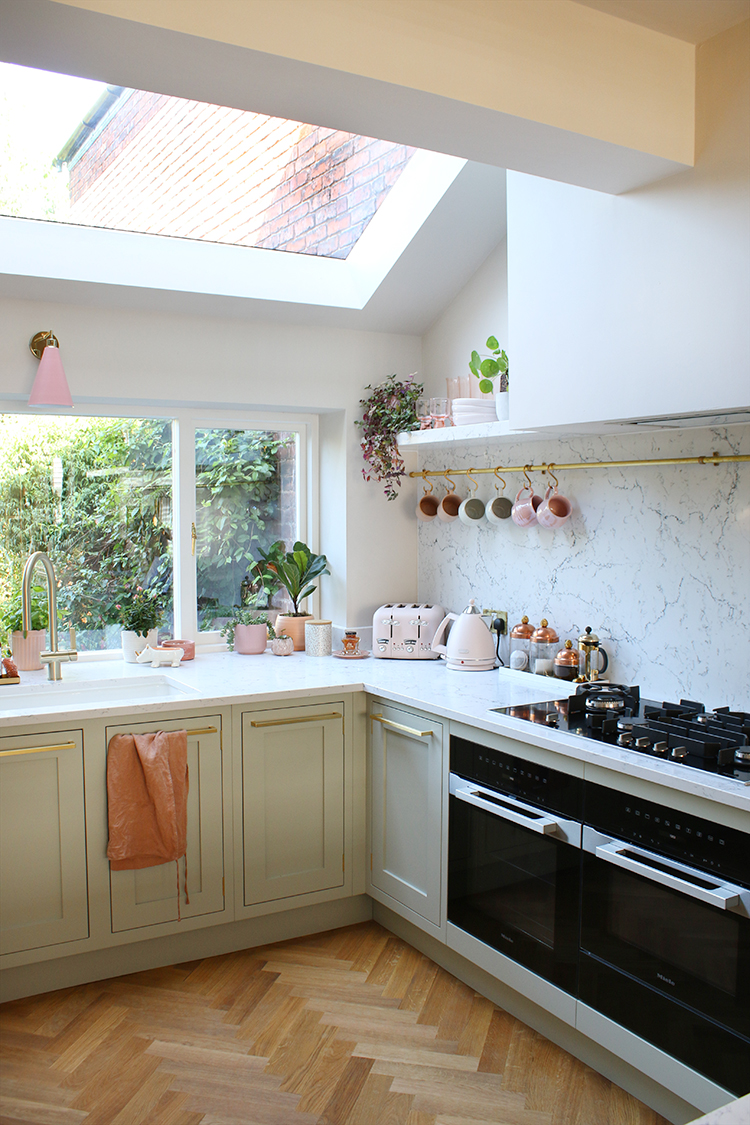 I initially wanted the entire wall and ceiling to be glass and sadly, our building regulations wouldn’t allow it (and looking back, we probably wouldn’t have been able to afford it!) so we opted for the biggest window and biggest roof light we could get away with. It’s a decision that I will never regret because it opens up the whole space and makes it feel bright and airy.

Reinstating the Plaster Cornicing in the Dining Room 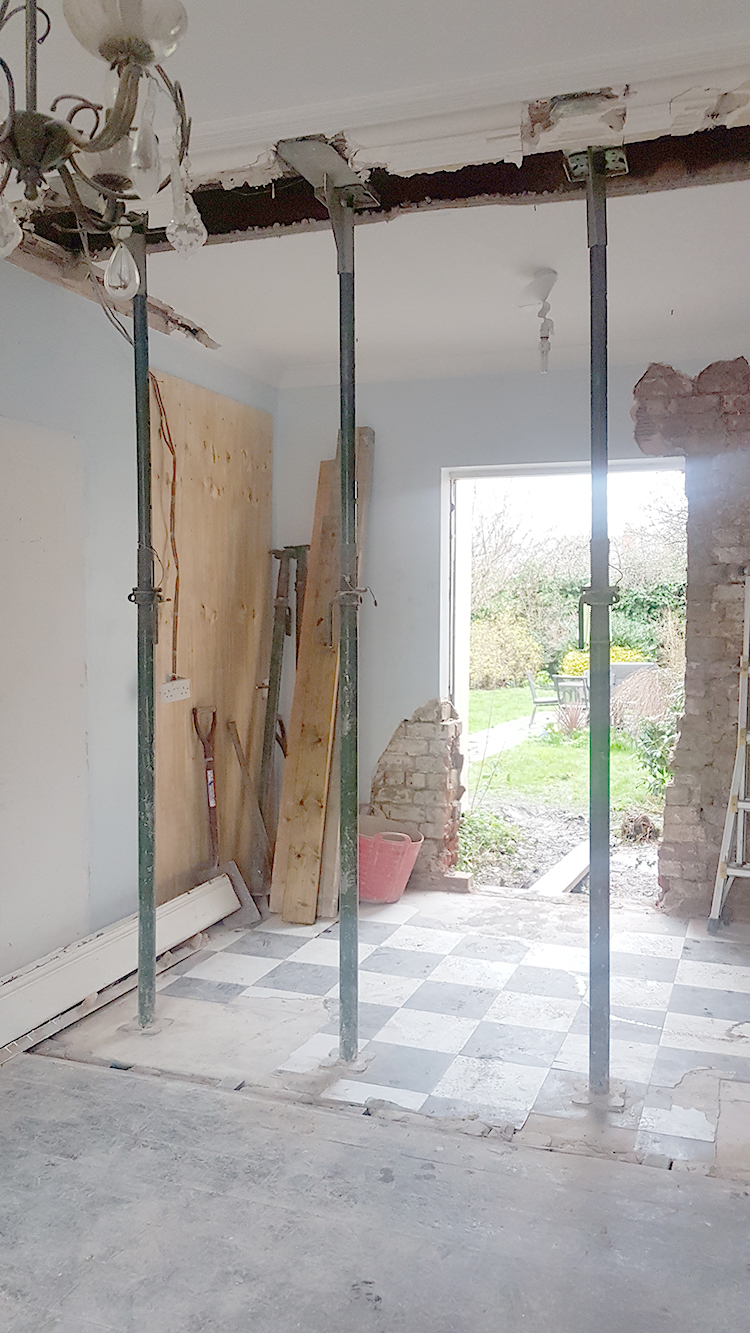 Despite my builder saying he thought they wouldn’t need to touch it, when they removed the wall between the kitchen and dining room, the cornice in the dining room on that wall was sadly destroyed with Acrow props having to be run straight through. The plasterwork on the ceiling crumbled and we debated whether to save money by not having it reinstated. 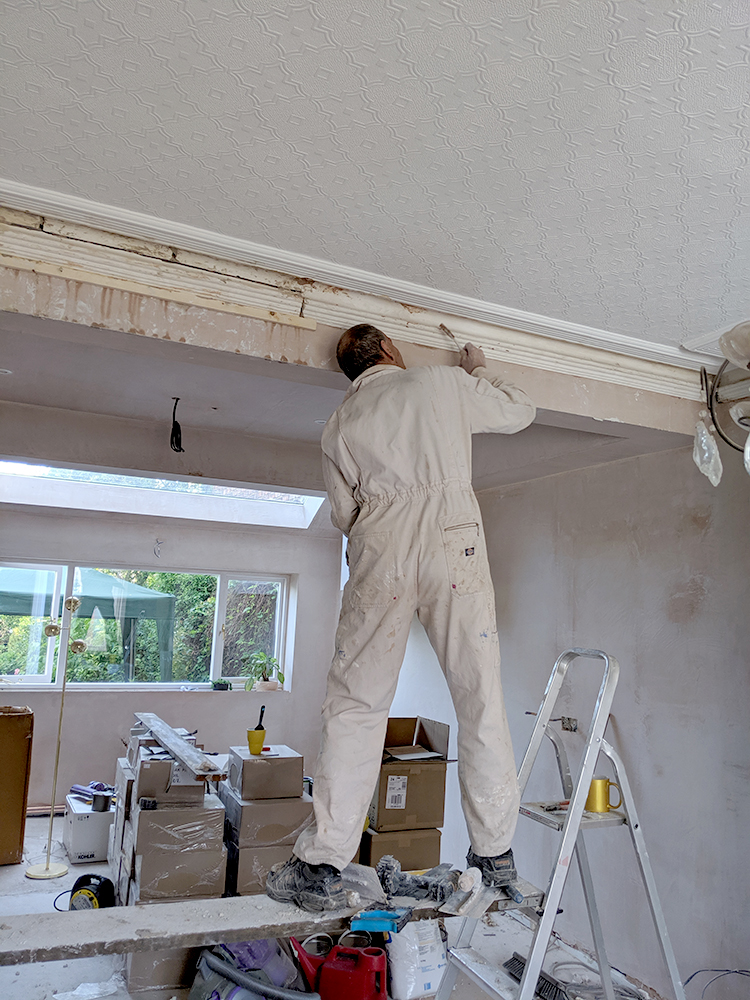 The debate didn’t last long. I desperately wanted to hang on to the history of this house and the original plaster cornicing was a part of that. We were put in touch with a retired plaster cast expert who painstakingly recreated the original cornice using the same methods they would have used 130 years ago. 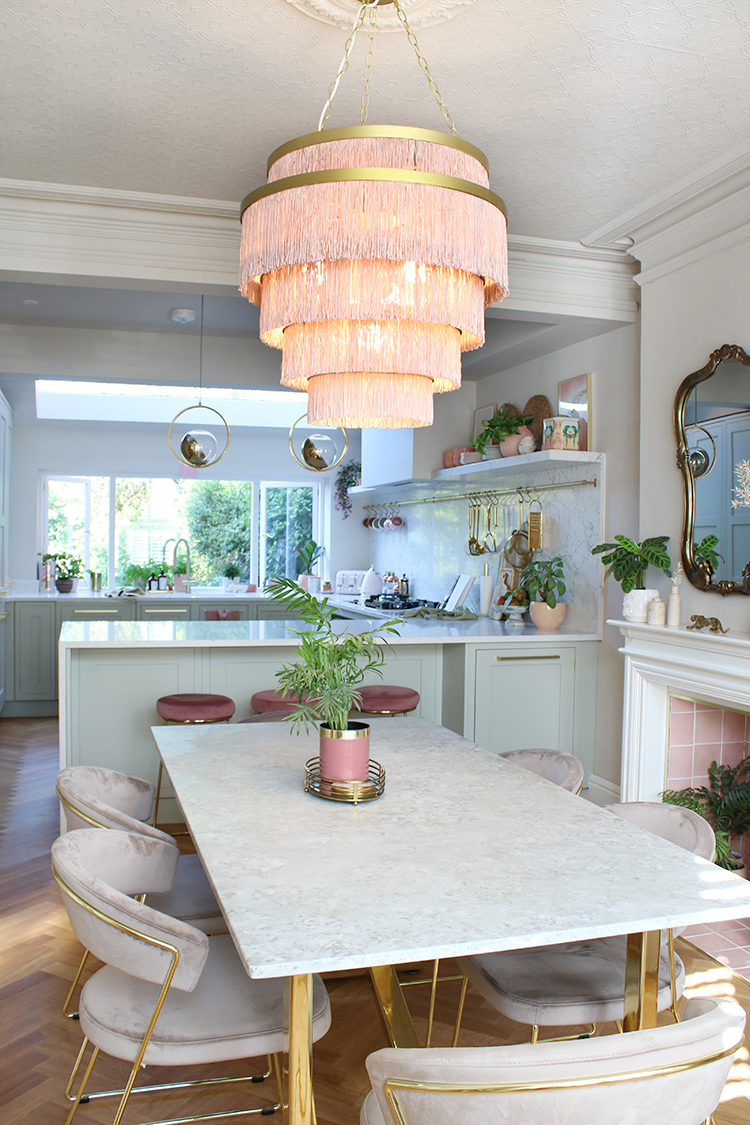 He did such a beautiful job and we’re now hoping we can get him back to do another small portion near the window that’s was badly affected by water damage.

And last but not least, when we first moved in, I was absolutely sure we would be ripping the entire existing fireplace out to replace it. I hated the orangey tiled hearth, the fireplace tiles that had long been painted over with a greeny-gold paint and I didn’t particularly like the surround either. As a stopgap, I figured I’d throw some paint at it and see if it made it a bit easier to live with until we had the funds for a full replacement. 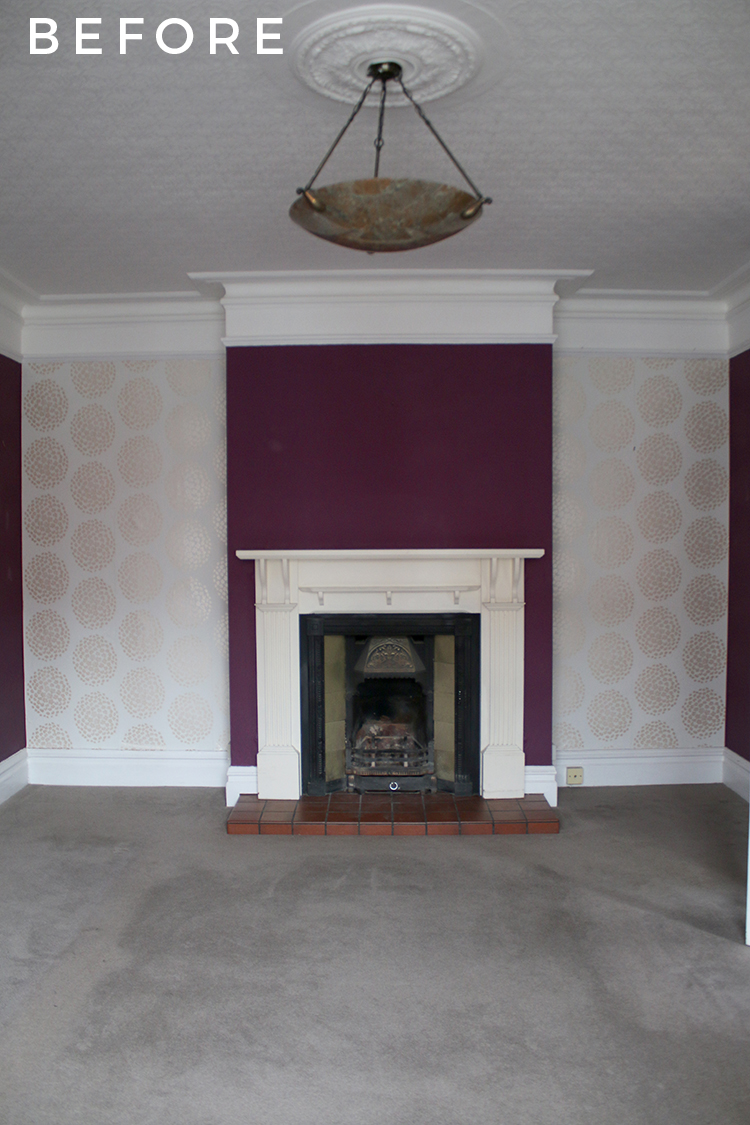 While you may not consider this a renovation in the strictest sense, choosing to paint our fireplace because we didn’t have the means at the time to completely replace it turned out to be a blessing in disguise. 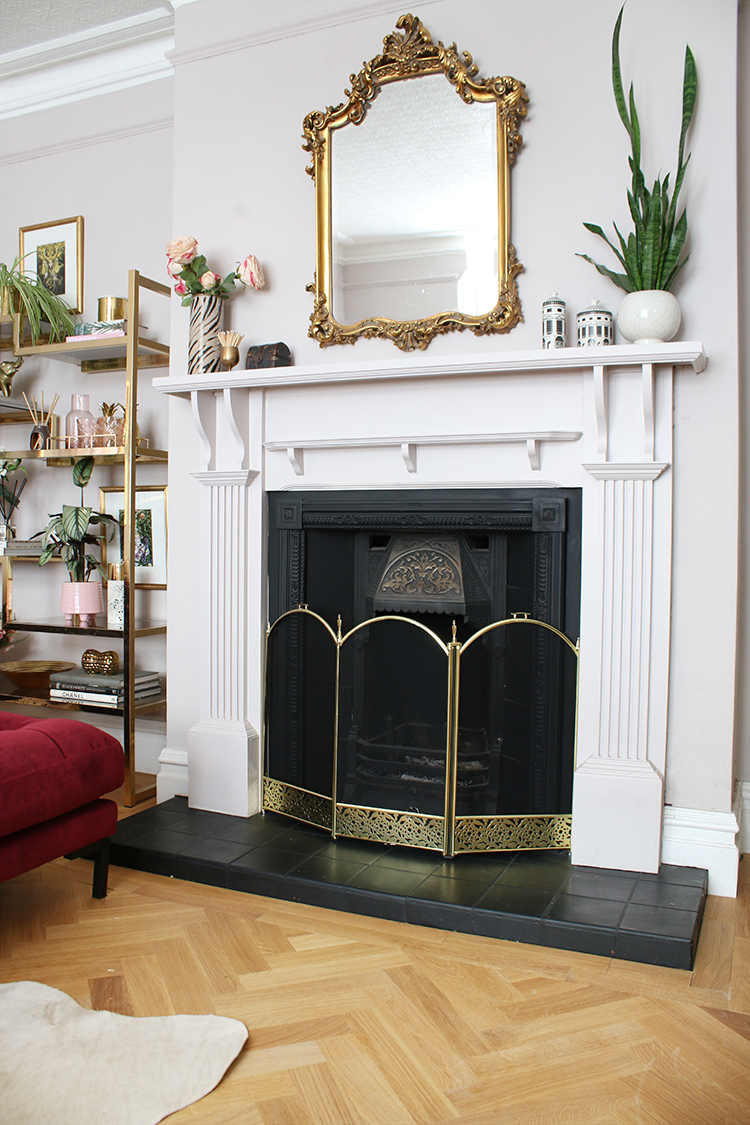 I detailed the products I used to bring our old fireplace back to life in this post but I couldn’t have been happier with the result. It’s amazing how much a bit of elbow grease and a lick of paint really transformed the whole look and feel of the room. I have no intention of replacing it any time soon (if ever). I just can’t help but think of the money we’ve saved and I’m so glad I decided to try painting it before we did anything further. I love it now!

So while we haven’t gotten as far as we may have liked to on this house, those are six of the things I’m so so pleased we’ve already managed to accomplish and decisions I have never regretted making. I’d love to know what renovation decisions you’ve tackled in your own home you love? Do let me know in the comments below!