My Minerva Worktops (And The Story So Far…)

So I promised an update on the kitchen this week and whilst it’s not as far along as I wanted it to be, I did want to let you know what’s been happening on it. 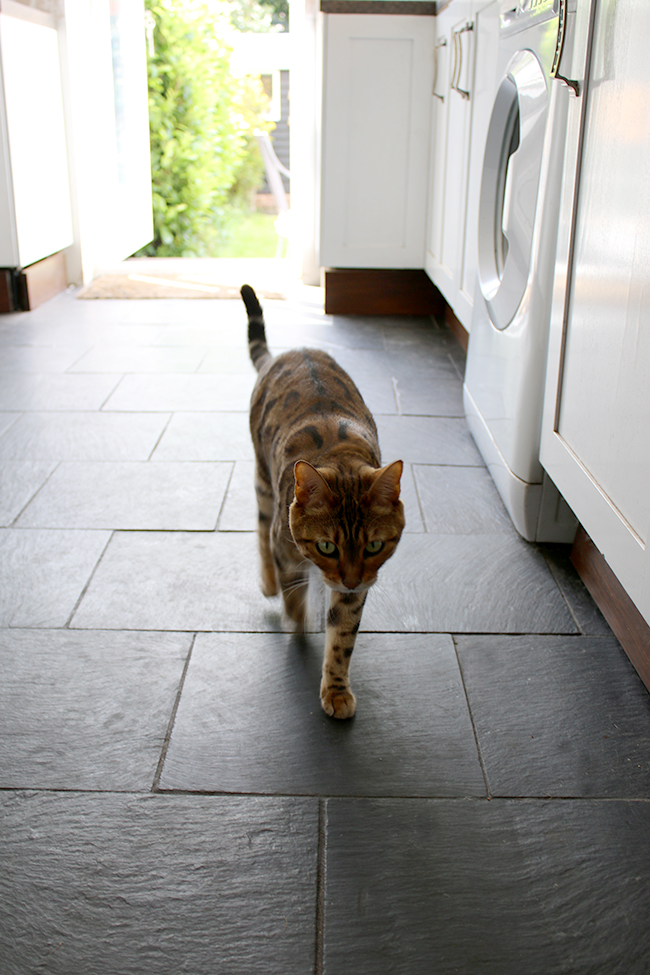 As I mentioned in my post on Friday, things went a little pear shaped in terms of the worktops – or at least in terms of their installation. I wanted to share a little bit about my experience in case anyone else was considering them for their kitchen design as well as get you up to speed in terms of where we are in our little kitchen upgrade/mini-remodel. I broke it into sections because it’s a wordy post! Yeah, sorry, I know some of you like pretty pictures (because come on, we all do) but well, I’m a talker and I needed to get it all out of my system! ;) What my worktops will look like eventually if they ever get installed. Except of course with gold sinks and taps! Oh and marble effect subway tiles… and I’m just having drainage grooves and not the surround… but you get the idea!

They are similar in some ways to Corian and looked very similar to actual marble without all the hassle of upkeep. Similar to Corian, they are made with acrylic but unlike Corian, they are solid all the way through (Corian is a layer of acrylic over a timber core so there are risks of warping there that Minerva worktops don’t have). Similar to laminate, they are pretty impervious to staining or etching and unlike laminate, if you do get a scratch, they can easily be buffed out as the pattern goes all the way through the surface. They are super hard-wearing as well (which I really liked) and have a beautiful soft finish similar to the real thing. I was sold very quickly on them as soon as I got the sample. 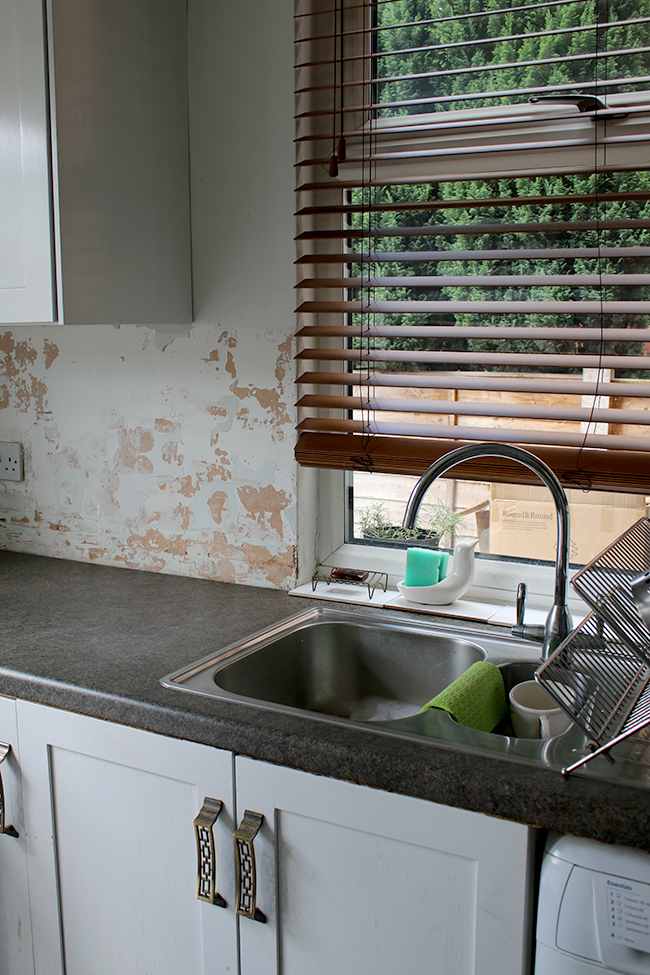 The current situation with the sink and windowsill – notice I have tiles that simply sit on top now because underneath it’s just a crappy piece of ugly plastic.

They weren’t as cheap as laminate or wood, of course. For 2 lengths of 3 metres plus another small section for installing into a windowsill and the joining glue, I paid around £1800. I sent a detailed drawing, all my measurements and photographs to the company I purchased them from and they recommended the sizes of worktop I would need to order based on this information. The worktops would then be cut to size and seamlessly joined by my installer. So far, so good.

The Search for The Installer

I then went on both Rated People as well as My Builder to get quotes for the job and to find a trustworthy tradesman who had experience in fitting acrylic worktops. This is where things started to go wrong. On Rated People, the job was ‘viewed’ over 500 times with not a sniff of interest. Not one tradesmen wanted to quote the job despite my estimating it around £500 (which is quite high for a worktop install but I wanted it done right). It was the same story on My Builder – it was viewed over 300 times and no one came forward to quote it. I tried rewording it, adding additional information and changing out pictures with no luck. Why did no one want this job?? Minerva themselves were unable to provide recommended installers. Finally, after a few weeks, one chap (let’s call him Craig since that was his name) from Rated People gave me a ring saying he was experienced in fitting these kinds of worktops and he’d be happy to quote the job at £300. It was his first job on Rated People and he was looking for reviews to build up his business. 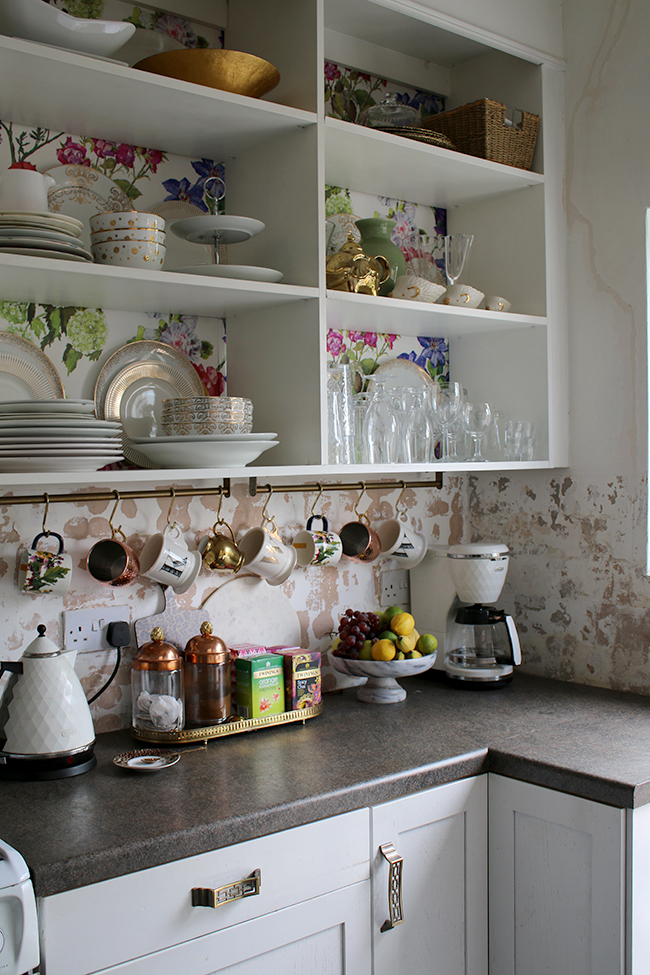 A little reluctantly but with no other real options, I decided to go for it. I ordered in the worktops to the company’s recommendations based on my measurements and drawings and they arrived around a week and a half later. The installer was scheduled for Monday, 25th July so I was incredibly excited that weekend, clearing the kitchen to prepare for their installation early in the week.

The Install That Wasn’t

On Sunday evening, I spoke to Craig and he said he was having problems with his van (someone stole his catalytic converter and exhaust) and he was supposed to be getting a courtesy van first thing on Monday morning. He hemmed and hawed a bit saying he wasn’t sure what time he was going to be able to get it and would it be possible to do the work on Tuesday instead? I agreed, figuring I could wait another day, no big deal. He said he’d be with me first thing on Tuesday morning. At this point, I’m still feeling quite positive.

He showed up around 10:30am on Tuesday (not exactly first thing), explaining he didn’t get the van until that morning, apologising him and his assistant were late. They then proceeded to pull loads of equipment out their van and into my back garden, while Quito just barked relentlessly (perhaps he knew something at this point that I didn’t?). Once they were set up, they had a look at the kitchen. He sucked his teeth at the fact the worktops weren’t perfectly level (even though he’d not told me we needed to do this and that he’d take care of everything). Then he measured out the worktops I had delivered and said I didn’t have enough to do the whole thing – that we were going to be short by about 20cm of worktops. WHAT. This is the point I start to lose it.

So I gave the company I purchased the worktops from a ring. They said they’d figured I could just do an extra join, using an off-cut to make up the additional needed to ‘save money’ even though this would mean the Cararra effect would be spoiled – the extra join meant the pattern won’t be seamless because it was impossible to match up the pattern perfectly where the joins are. Cue crushing disappointment. 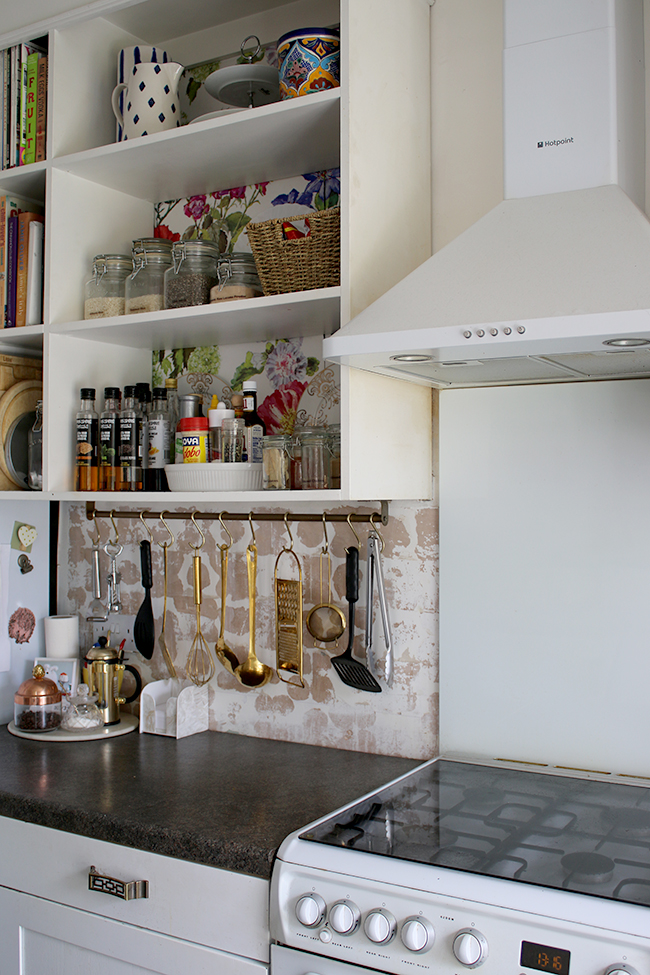 I wish they’d given me the option of knowing that there would be an extra join and allow me to decide whether I was happy with that or wanted to spend a bit extra to have that consistent look all the way across the worktops. They then informed me that if I wanted to order the additional piece so I could have a seamless look, it would take another 10 days at a minimum for manufacture. Even then, there was no guarantee it would all match in colour as they are manufactured in batches and the colours wouldn’t necessarily be exactly the same. *headdesk*

I talk to the installer and after much deliberation and frantic re-measuring, we decide the join could be hidden slightly so it wouldn’t be too obvious so there seemed to be no point in ordering the additional size and waiting even longer and spending more money. Although with all the teeth sucking going on with the fact the existing cupboards weren’t perfectly level, I agreed to paying an extra £100 to level all the cupboards. 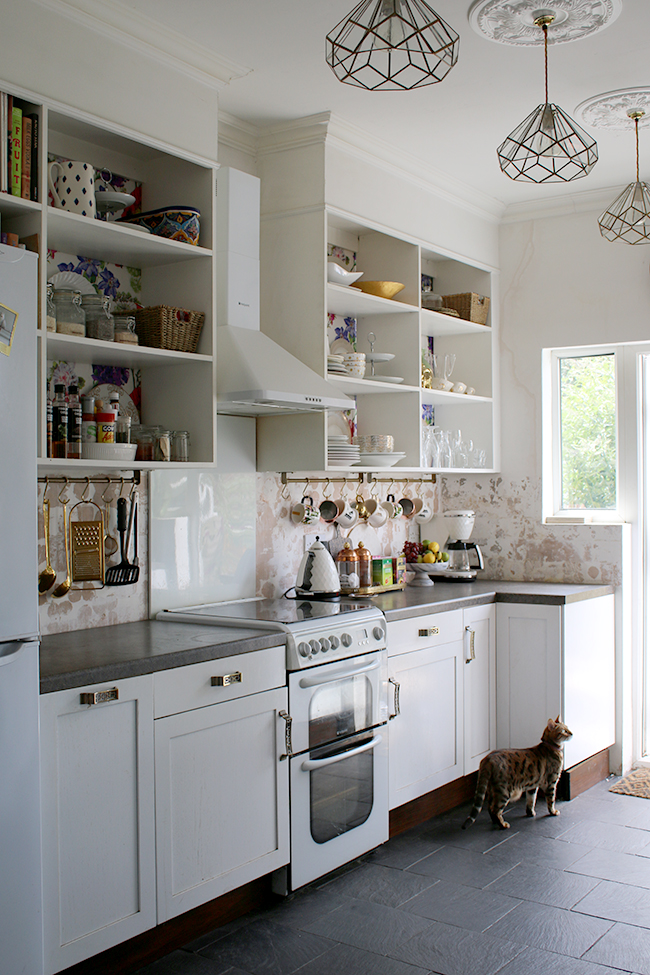 By this time, it was 12:30pm and they’d not even started yet. He suggested they come back on Wednesday “bright and early” to get started on the work first thing rather than start the work so late. I agreed again to the delay, knowing I would have to yet again rearrange my own schedule to be home. He said, ‘Could we start at 8am? Is that too early for you?’ and I told him of course, I would be up and ready well before that time. The earlier they started, the earlier they’d finish, right? Despite everything, my worktops would still get installed – not exactly to my perfectionist standards with the additional join, mind you, but still. They’d look pretty when they were finally in and that’s all I wanted. Craig texted me that evening making a suggestion about the join again which eased my mind to the fact that he was at least still contemplating things. I had no reason to worry. Everything was in control.

Tuesday evening, Wayne and I decide to remove all the tiles from the walls seeing as there would be mess later to do this anyway so we might as well do it now while the worktops are being done anyway – this is what you’re seeing in all these pictures, by the way. Wayne also dug out a crack in the plaster near the window which you can see above and repaired it ready for when we eventually paint.

Wednesday morning at 6:30am, I wake and shower and start clearing the kitchen again for the install (given the fact that each evening, we still need to use the kitchen so I’m moving things on and off the worktops each night). By 9am, he still hasn’t arrived so I send him a text asking if he’s on his way. No response. Okay, maybe they’re stuck in traffic? I check traffic, it’s clear. Hmmm. By 10am, still nothing. I call Craig. It goes straight to answer phone. Subsequent phone calls go the same way. By 12 noon, I know with a sunken heart, he’s not coming back. Craig never does return my calls. He basically goes AWOL. Everything has gone to sh*t.

After much deliberation and discussion, Wayne and I decide we’re going to do this ourselves. It’s not our first choice and I’m absolutely scared to death seeing as how much I paid for them but Wayne has watched all the installation videos on the Minerva website a bunch of times, has ordered in some new equipment (which all in, will cost less than what I’d budgeted for installation) and feels confident. 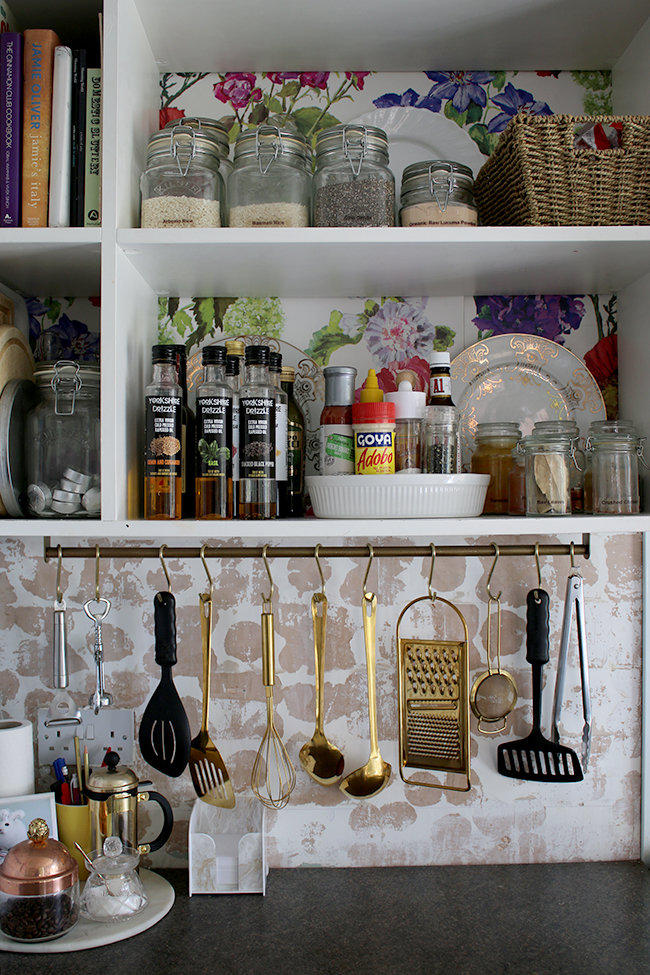 We intended to do the work this weekend but we realised we had to order in new blades for the circular saw and an additional joining kit so we couldn’t start work just yet. We also need to order in a template for the sink cutouts. DIYing doesn’t come cheap at times but even the extra equipment is less than the £400 I would have paid so we’ll save a bit of money. We’ll level the worktops ourselves and Wayne will have a friend who’s also quite experienced with DIY around to help him out.

So yeah, we’re going to go for it. This weekend, I spent most of my time trying not to think too hard about how things have panned out so far. I decided to clean every inch of the open shelving (I do this periodically – take everything off, wash everything by hand, clean all the surfaces and re-organise which takes me a good few hours) as well as clear out the clutter from a few of the cupboards. It felt good to do that. To purge things I no longer wanted or needed, to organise things better, to give me a sense of a clean slate, to look forward.

We’re going to try something we’ve never done before and we’re going to tackle it like we do everything else – with a positive outlook and gathering as much knowledge as we can in the process. We’ve done it before, right? So there’s no reason to think we can’t do it again.

Of course, I’ll be sharing the journey just as I always do. Have you had any nightmares on your own kitchen remodel? How did you overcome them? Ever installed a worktop yourself? Go on, share the love.