Now, you may recall from my last the kitchen that things hadn’t been going so the kitchen worktops. My installer had flaked on me and we’d decided to just attempt to do the work ourselves. As we’d never fitted a worktop before, never mind an acrylic one, we were a bit scared but cautiously optimistic. And so far, it seems our optimism has paid off. 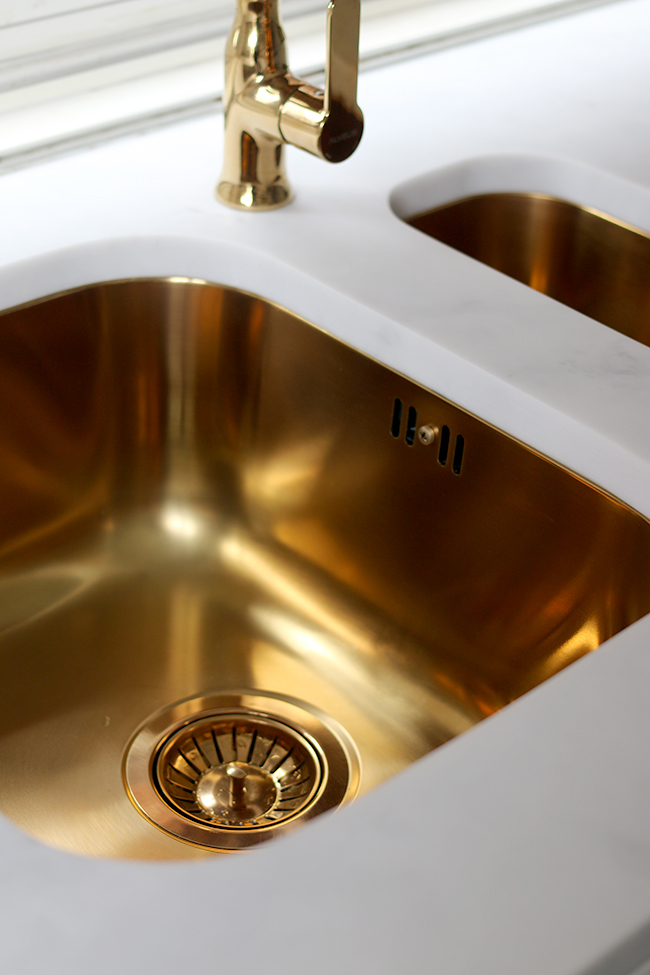 We cut the first part of the worktop last week because Wayne wanted to be sure our tools were up for the job. Thankfully, all the things he’s collected over the years doing so much DIY on the house paid off and we really only needed a few bits to prepare ourselves for the installation. The new router blade cut through the acrylic like butter and we were able to do this fairly easily. Hurrah! Of course, these were just simple straight cuts and we knew the challenging bits were yet to come. 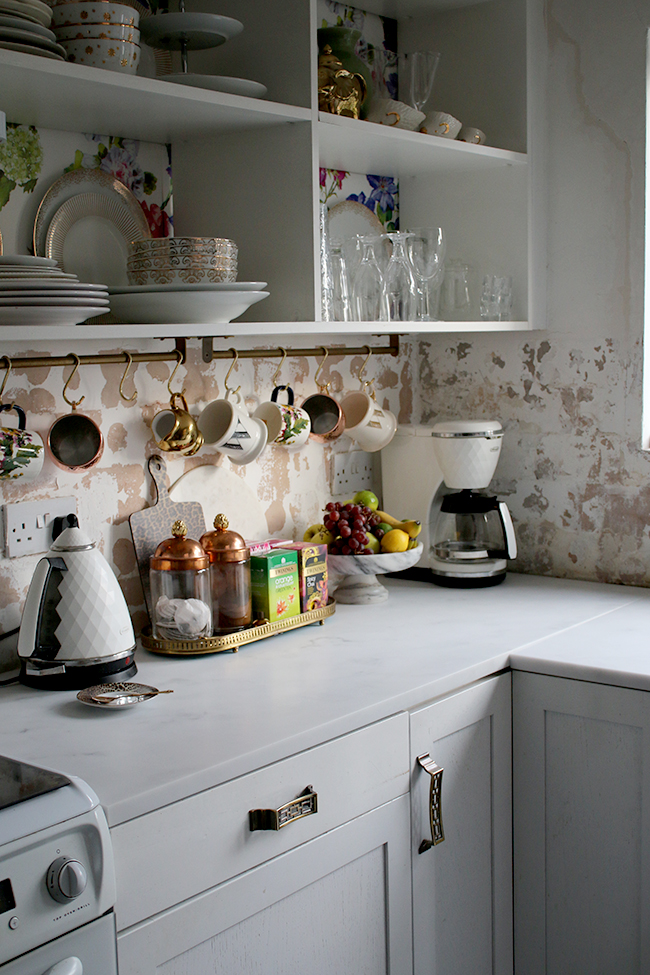 The cabinet still needs and the joins so that’s why you can still see a line where the two pieces meet in case you were wondering! ;)

Wayne’s friend, Gabriel (who’s pretty skilled at DIY himself) spent a good part of Saturday assisting Wayne which we were so grateful for. He was absolutely needed in terms of lifting the extremely heavy worktops on to workhorses and ultimately into the kitchen and it’s something I wouldn’t have been able to help with (I tried lifting them and failed miserably). So thanks to Gabriel – you’re a star!

During the previous week, Wayne had created a template for the sink cutouts using the measurements from the sinks themselves. This required a lot of math and apparent wizardry, testing and perfecting them so that when it came time to cut them, he knew the sinks would fit seamlessly. These kinds of cutouts are normally done in a factory so you are talking about computer-accurate precision which is just really difficult to do when you are cutting something by hand with a router!

First things first, they actually used the old worktops to test the templates to make sure they were right. Thankfully, Wayne had done a great job so they only needed to make some very minor adjustments (we’re talking millimetres here) to the final template. 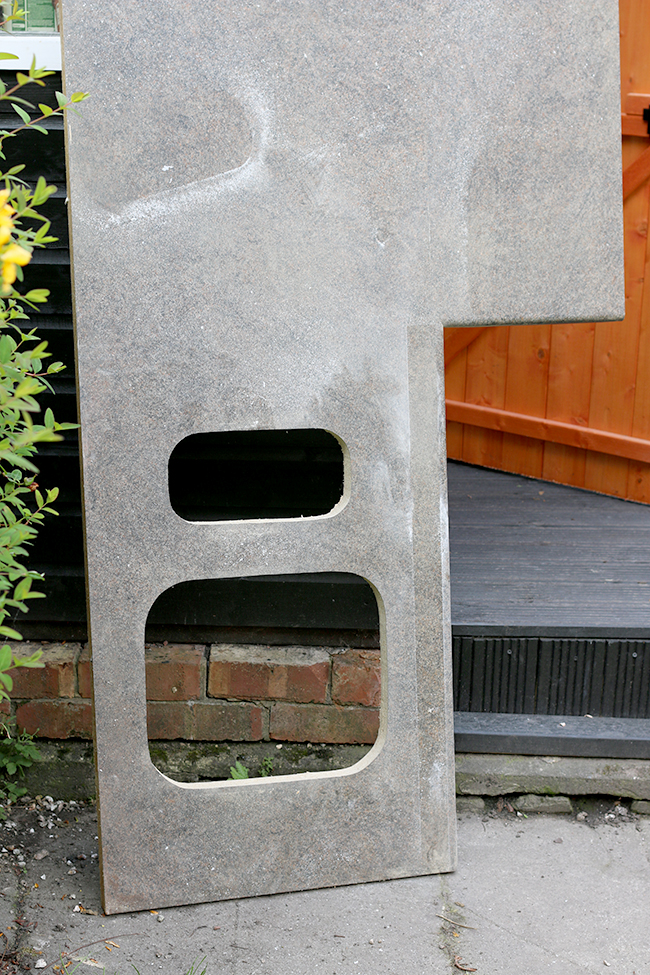 Testing the template on the old worktops 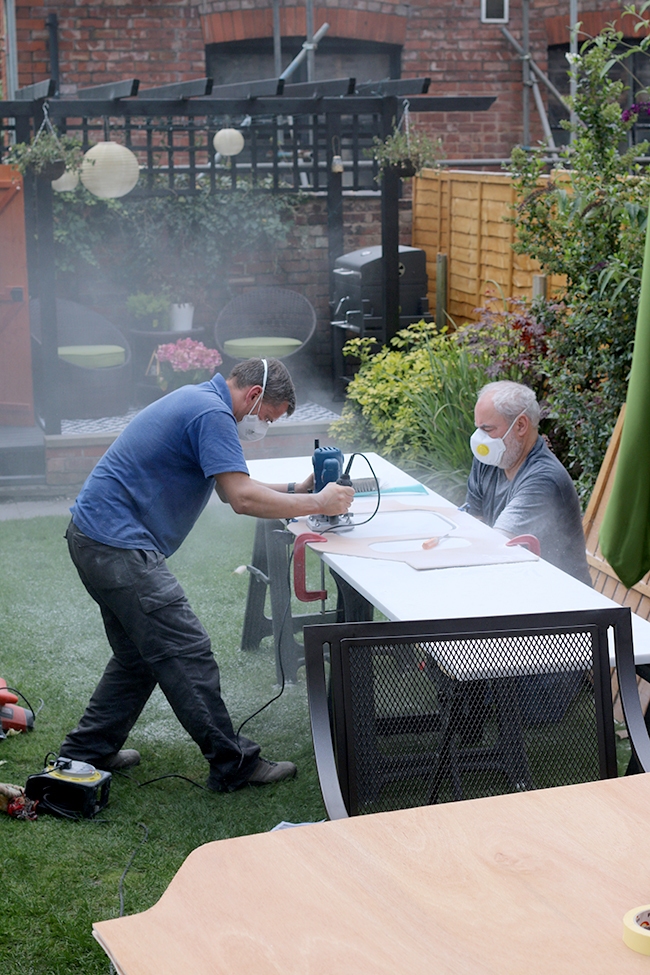 Cutting out the holes for the sinks using the template Wayne made. The amount of dust created was incredible!

I have to say, the cuts came out amazingly well. We were all  relieved! 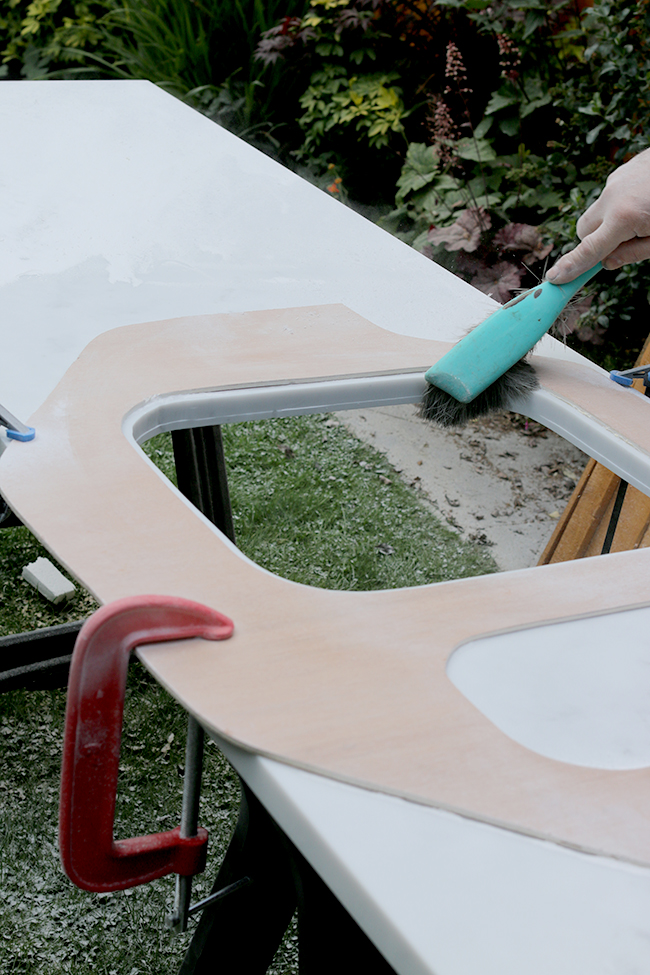 The acrylic material itself is incredibly easy to work the sense that they are totally sandable (is “sandable” a word?) so you can smooth it all out really easily once the initial cut is made to create a lovely smooth surface. 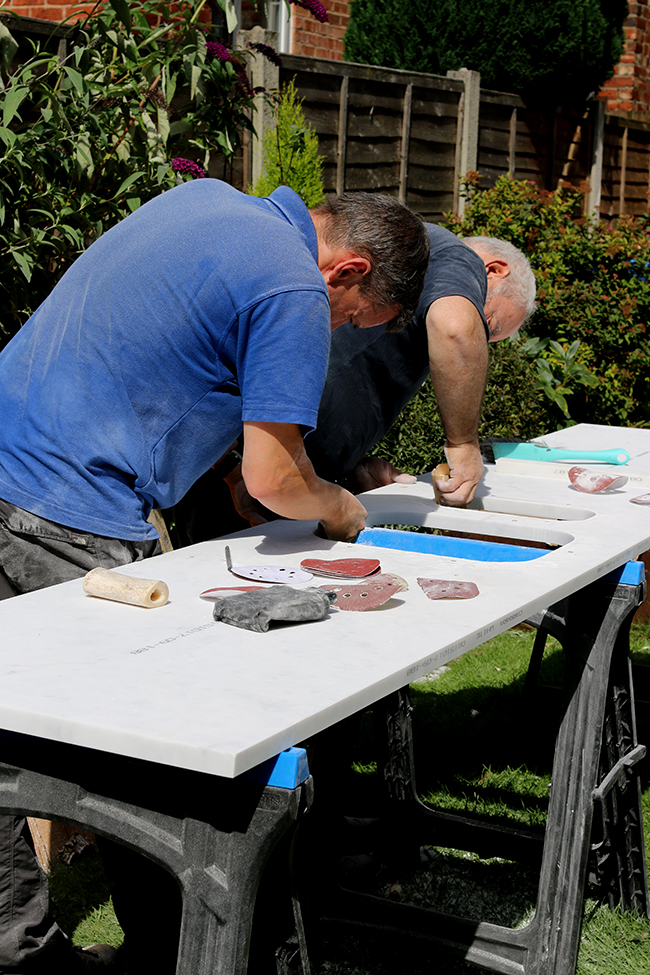 Sanding the edges totally smooth! Look at that concentration!

Next up was deciding where the tap hole would go… 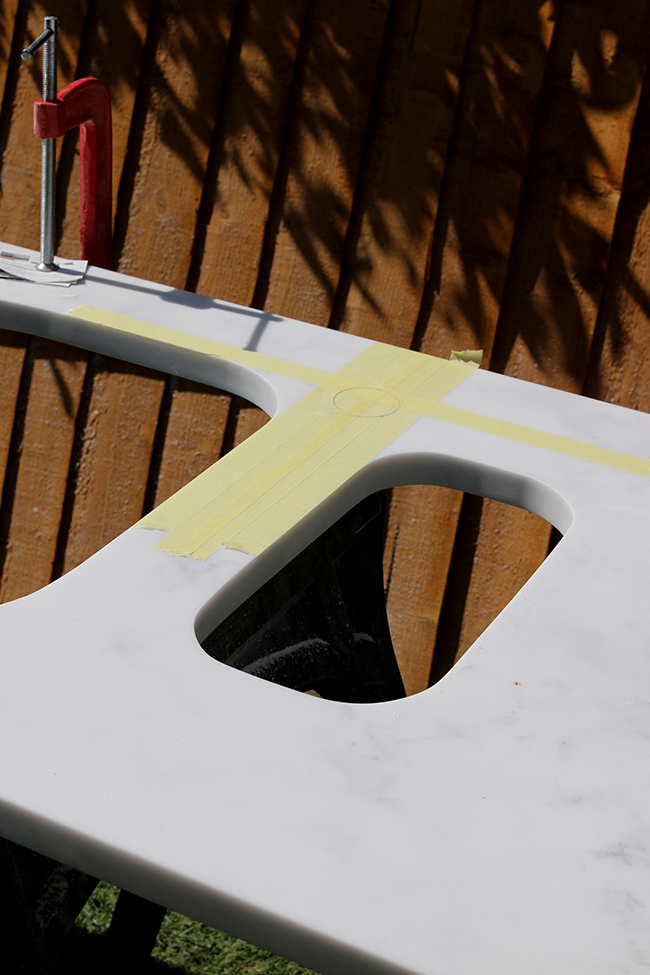 And of course, drilling the hole… 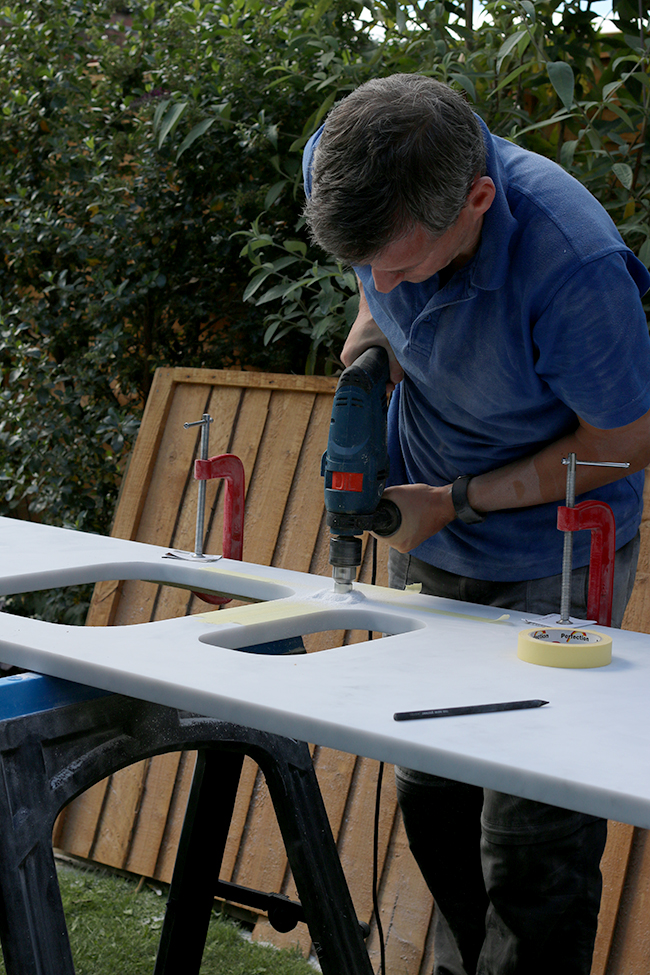 Once the and tap hole were cut, they were able to set it into place on the cupboard doors. Sounds easy but there was clearly a lot of huffing and puffing involved! They used a piece of wood clamped to the underside of the cutouts to stabilise the weight when it was lifted. The last thing we wanted was for the acrylic to break at its weakest points whilst moving it into the kitchen! 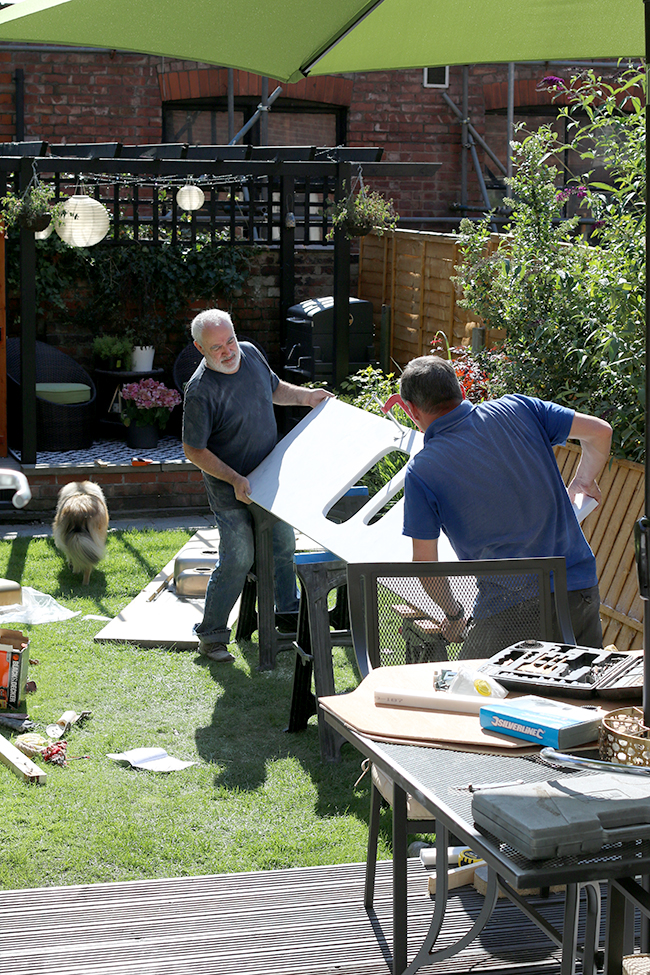 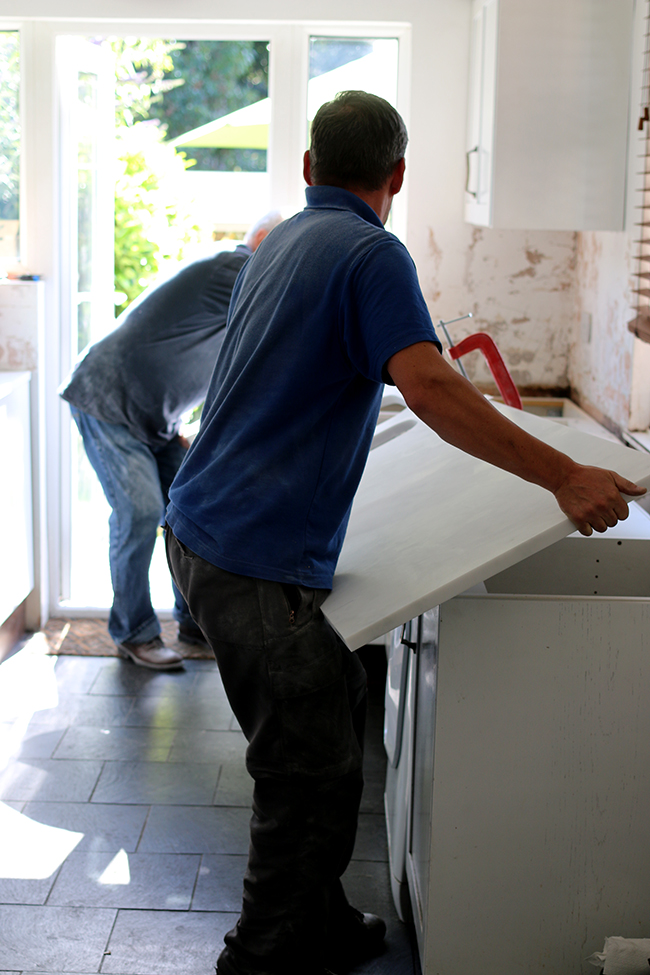 The other pieces for each section of the worktop were also cut to size. By the time everything was cut, they’d been working flat out for something like 6 hours so Wayne called it a day around . Not that I could blame him – they were both covered in dust and sweat from the hot summer sun. A few beers were definitely in order. 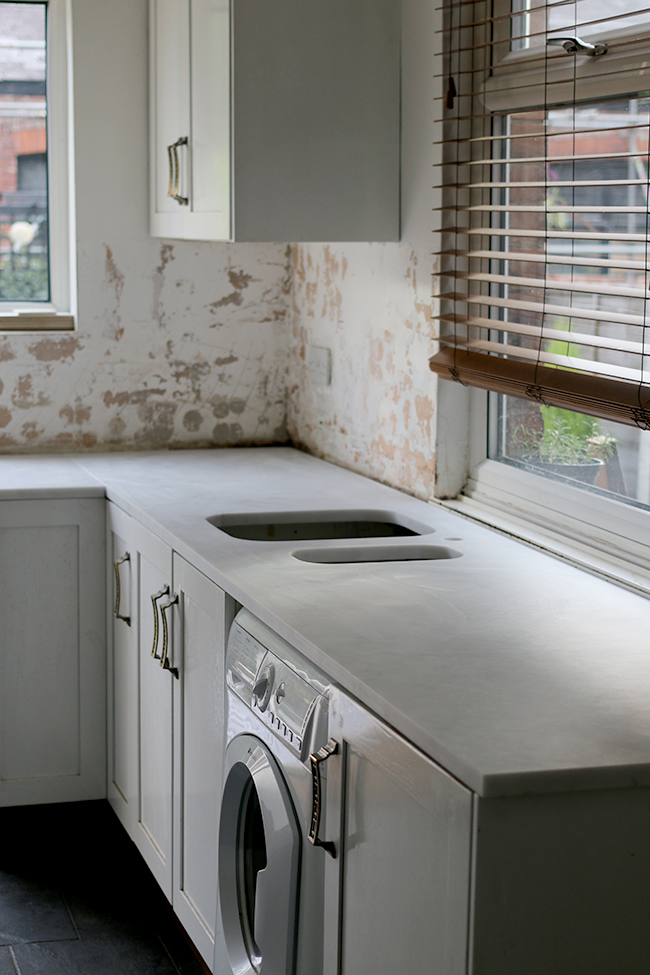 Not bad for a day’s work.

The following day, Wayne started on installing the sinks and tap. Fitting the tap was relatively painless. 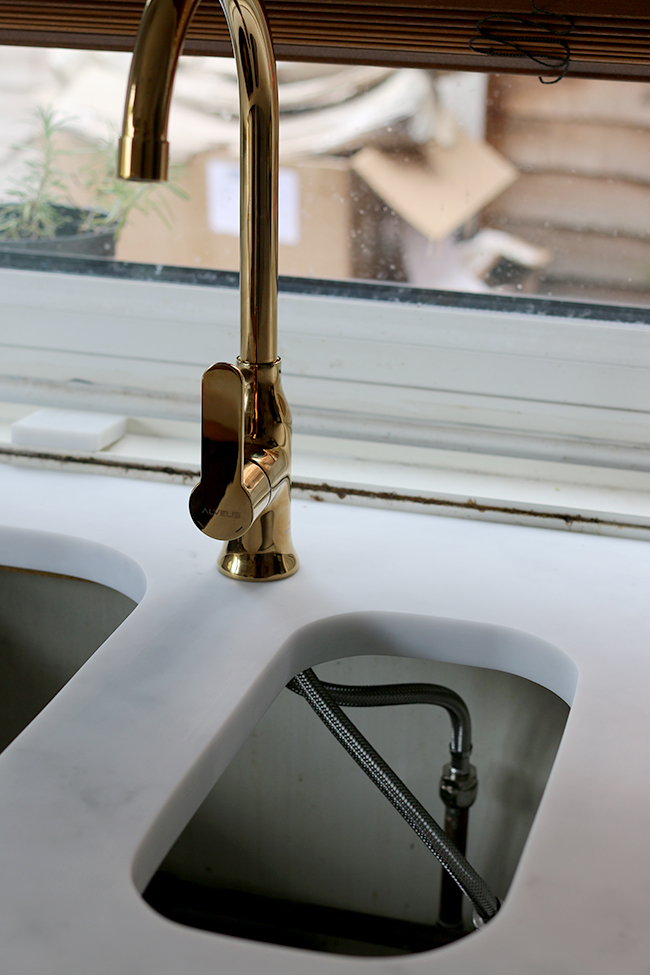 The gold tap is fitted!

The plumbing for the sink, however, required three separate trips to B&Q for parts!! While we were hoping that we could reuse at least some of the existing plumbing pipes we already had to save money, because the sinks sat lower in the units and we had two overflow traps rather than just one, it was like creating a little puzzle out of the pipes. 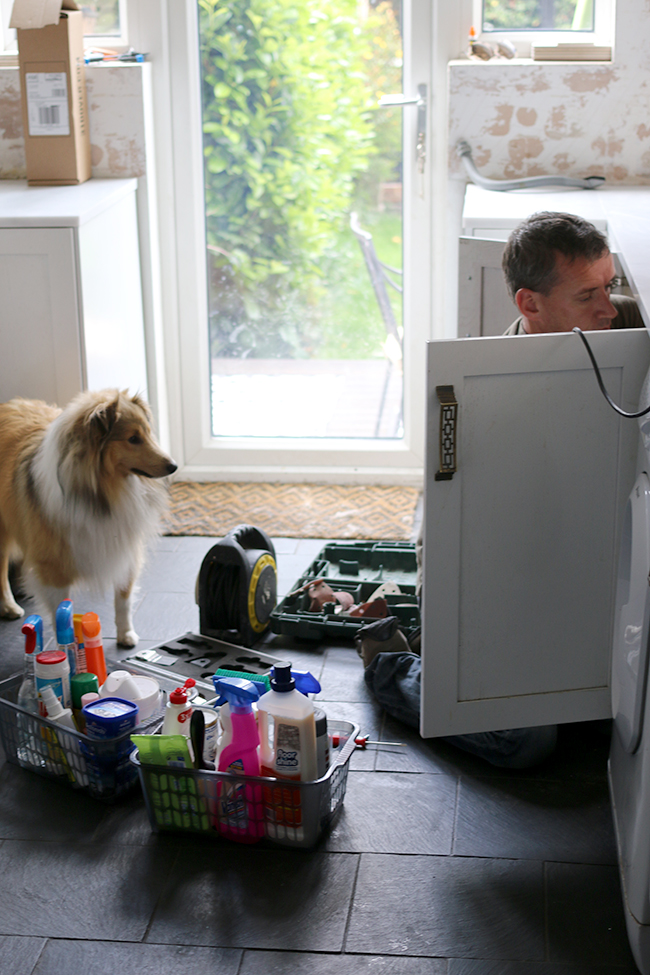 I’m sure Quito thought he was helping.

Finally, Wayne decided to just replace all of the plumbing because I think by then (hours with him turning the air blue in the kitchen), it was the only logical option. 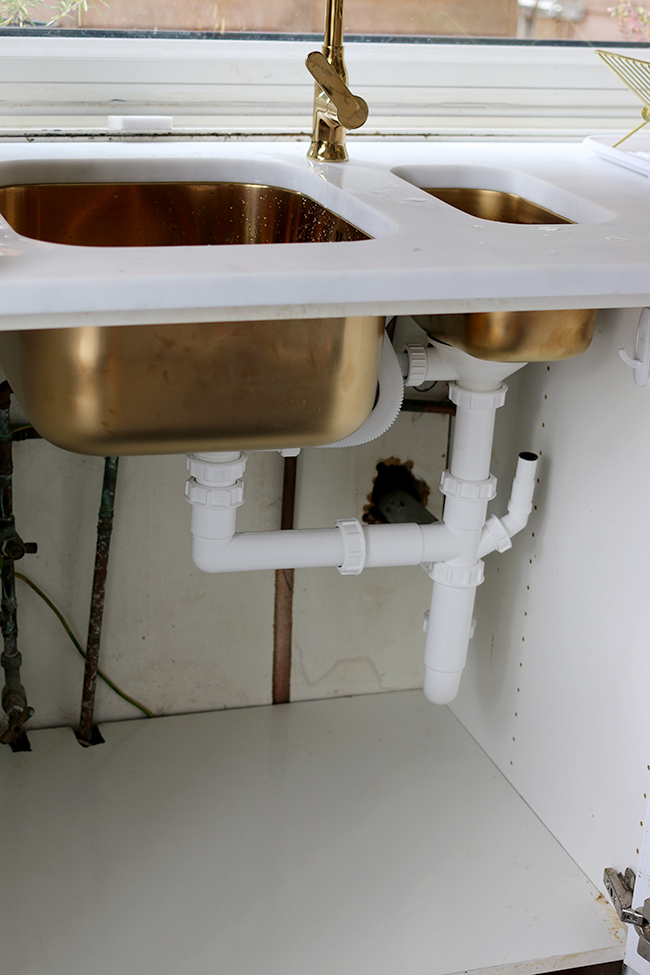 By Sunday afternoon, however, I had a beautiful gleaming gold sink and tap that were like something straight out of my dreams. So, how about a little before and after action? go on then. 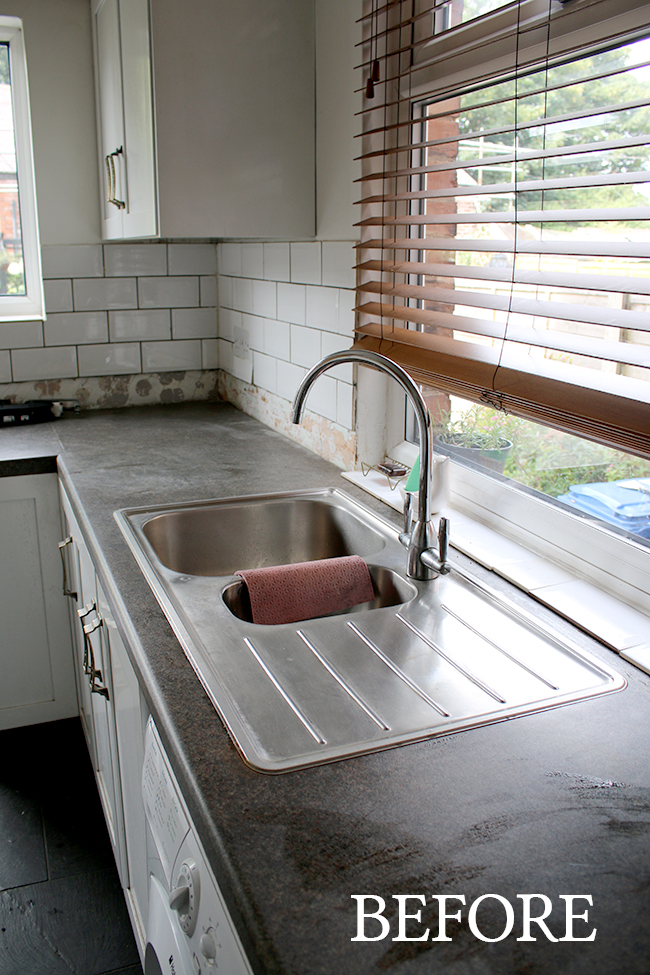 And what it looks like now… a marked improvement! 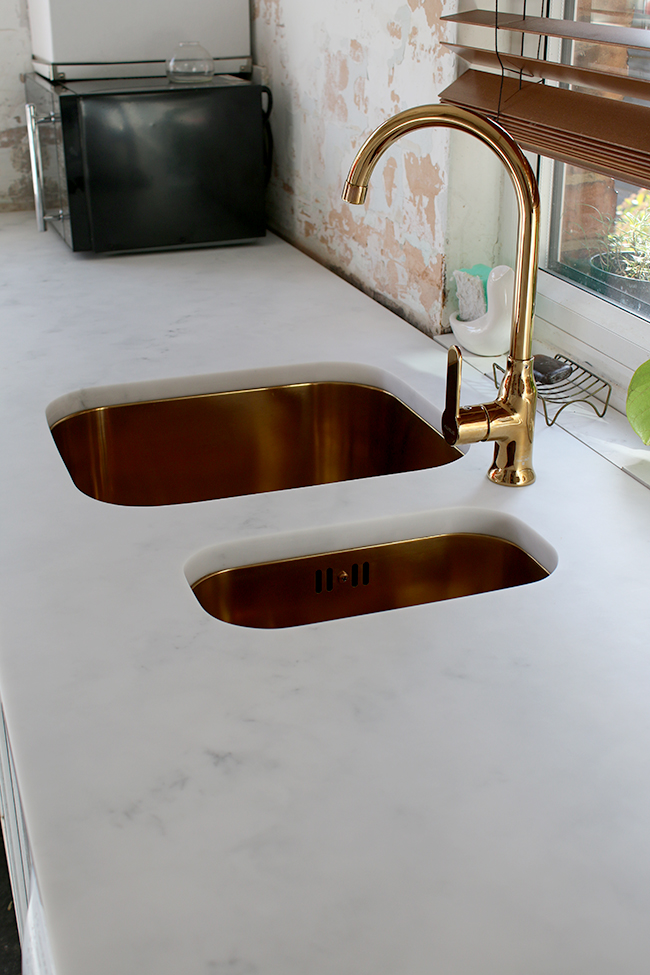 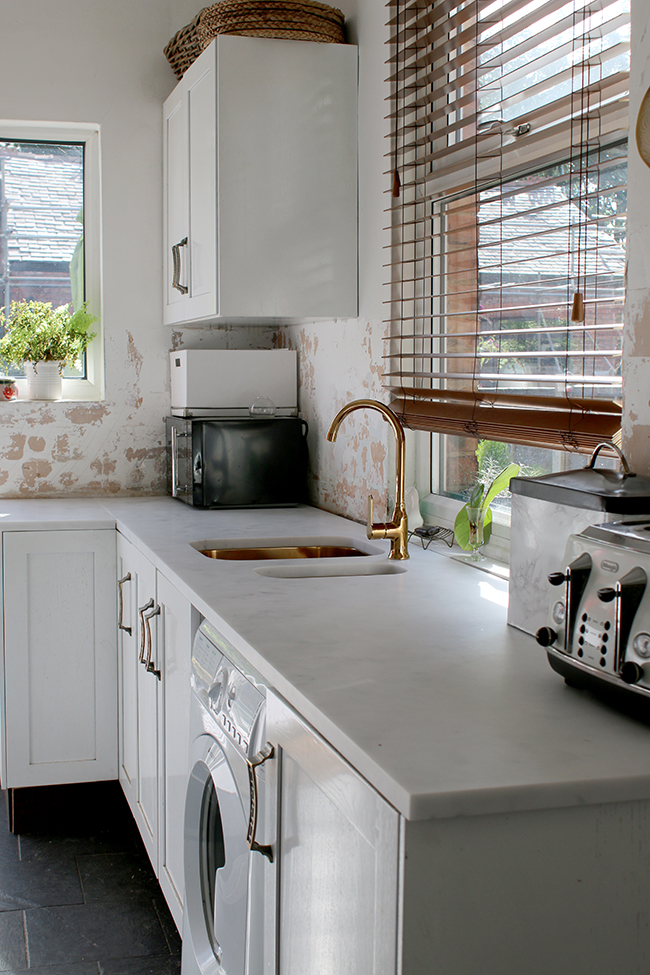 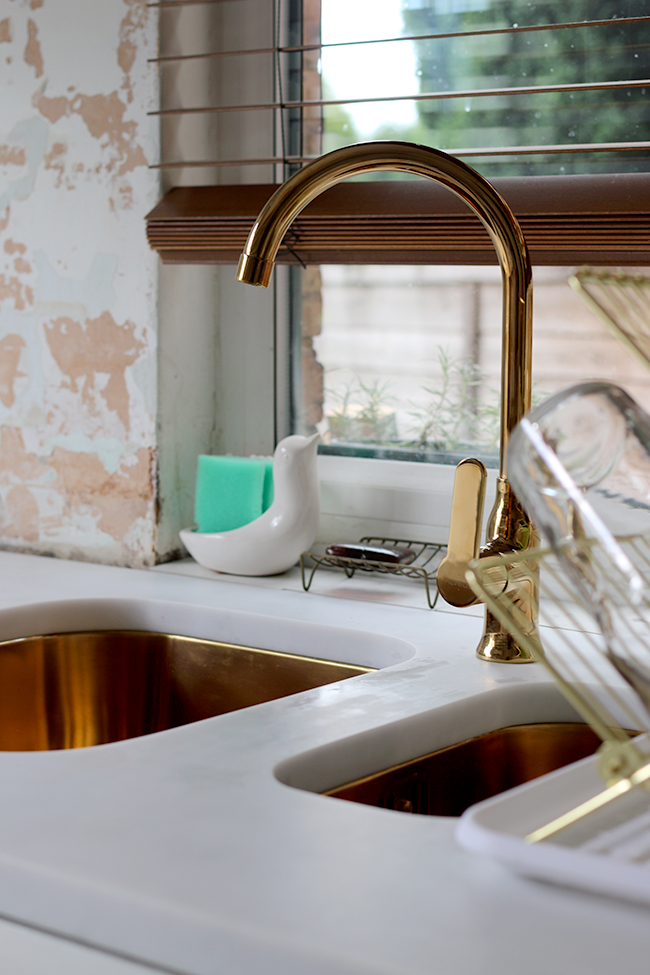 What you are seeing here, of course, isn’t the done deal. The worktops need to be totally levelled and secured to the cupboards (they are simply sat on top right now, although due to their weight, they aren’t going anywhere at the moment), the three joins need to be glued, filled and sanded and the windowsill piece needs to be cut as well and then joined to create a seamless inset into the window. At the moment, I’ve just laid a few tiles in the gap as a temporary measure so I didn’t have to look at the ugly sill ;) 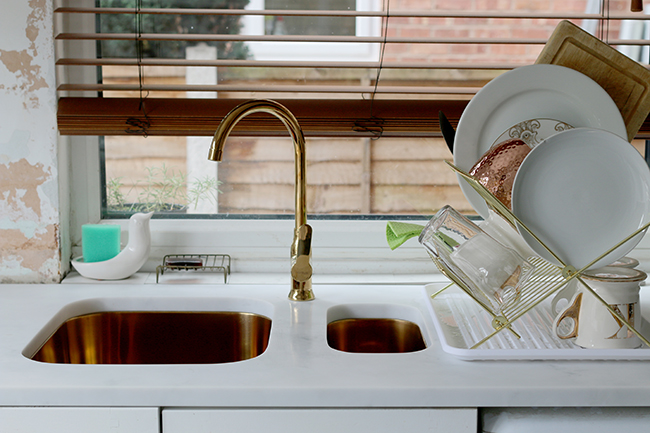 I also need to get a dish draining mat rather than that cheap plastic one you can see above. (At least the gold drainer is pretty so there’s that.) We decided against doing the drainer grooves as opinion seems to be split on their usefulness and I like the idea of being able to hide the whole set up away once dishes are done. Plus, I’ll have more usable worktop space as well as an uninterrupted look in the worktop which, for a small kitchen, is always useful.

Oh, if you are wondering where the sinks and tap are from, you can find them here!

So next weekend shall be spent finishing off the worktops for this particular phase of the project. Next up will be painting the lower cupboard doors black and installing new hardware. Stay tuned, we’ve only just begun!

In the meantime, what do you think of the new look so far?