Happy New Year! Can I still say that on the 6th of January? I’m going to just go ahead and say, sure. We are less than a week into a brand new year and if you hadn’t heard, a brand new decade. I keep seeing so many then/now pictures across my social media but I won’t regale you with that, I’ll just say the last decade has been huge… but then, who’s hasn’t? A decade is a pretty damn large chunk of time so if you haven’t witnessed major changes in your life – both good and bad – then are you actually human?

I mean, I really wish I had a then/now pic of what my blog looked like when I started it back in 2010. Yes, as of July this year, it’ll be a DECADE I’ve had my blog and it’s because of this little blog that my life is pretty much unrecognisable. The earliest screenshot I have of my blog is from March 2013 when it looked like this: 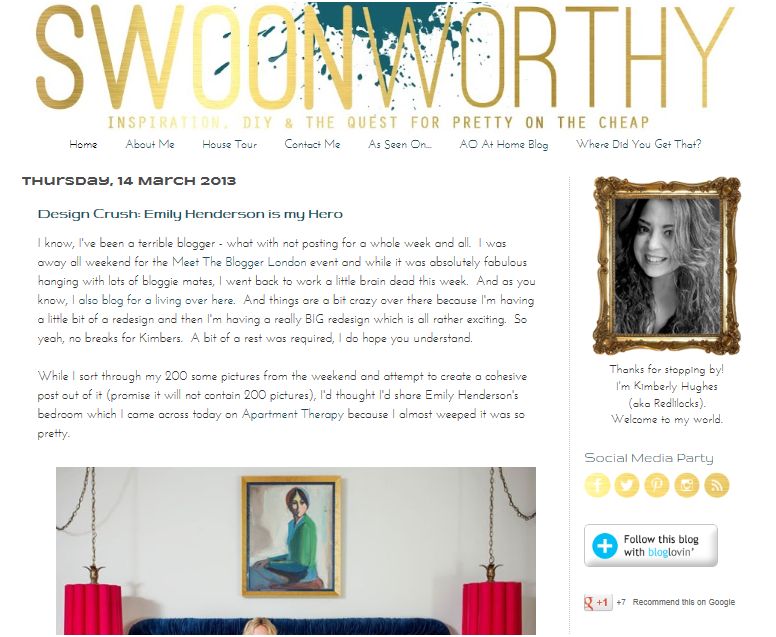 Wow, yeah, I know, I’m cringing too! And that wasn’t even my first blog design – they were even worse than that. Anyway, that leads me into my first fun thing of the new year – that Swoon Worthy got a little polish over the break with a slightly new look, new logo, new fonts. The changes to the design of the blog haven’t actually been major, however, mostly because I don’t save up changes and do them all at once like normal people. I’m a tinker – meaning, I’m constantly tweaking and changing things as and when I’m in the mood so it’s very very different from where it was even a couple of years ago. 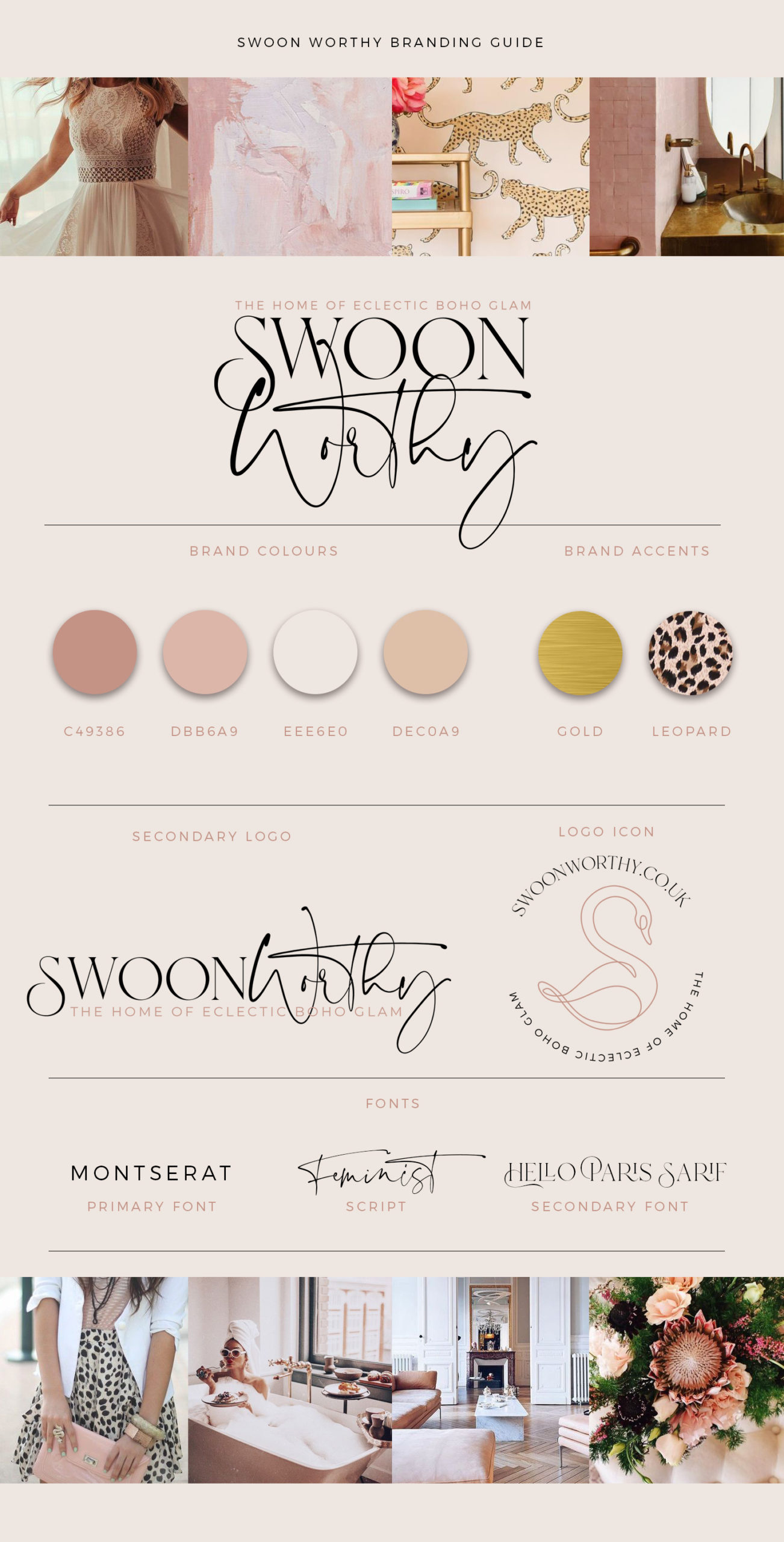 What hadn’t changed since 2016, however, was my logo and some of my branding. At that point, I was really very into the stark contrasts of black and white and gold but things change, my tastes have become just a little more subtle, my colours have softened, there’s not as much contrast anymore – all reflected in how I’m decorating this house to be fair – and so I thought a new logo and some new branding was definitely in order.

What you see above was the branding guide I put together myself. I really love how it came out and if you’re viewing my blog on a laptop or tablet, you’ll see how all these elements are incorporated into the blog now. I hope you like the change! It was more of a ‘refresh’ than a full makeover but those are fun too, right?

Anyway, I wanted to acknowledge all that first before getting into the rest of the blog post just in case you were thinking something’s changed but you couldn’t put your finger on it! ;)

The other thing I wanted to talk about was 2019 and some of my highlights because I think it’s really important to acknowledge your successes and allow yourself to celebrate them just a bit. I know here in the UK, it’s practically frowned upon to ‘toot your own horn’ – god forbid you actually even say something nice about yourself or people are either up in arms about your lack of humility (which in England just means STRONGLY TUTTING in your direction) or they are standing at the ready to take you down a peg or two. I hope you allow my American-ness to come out for just this time without chucking stones. I promise I’ll get back to my self-deprecating English-ness just as soon as I’m done. 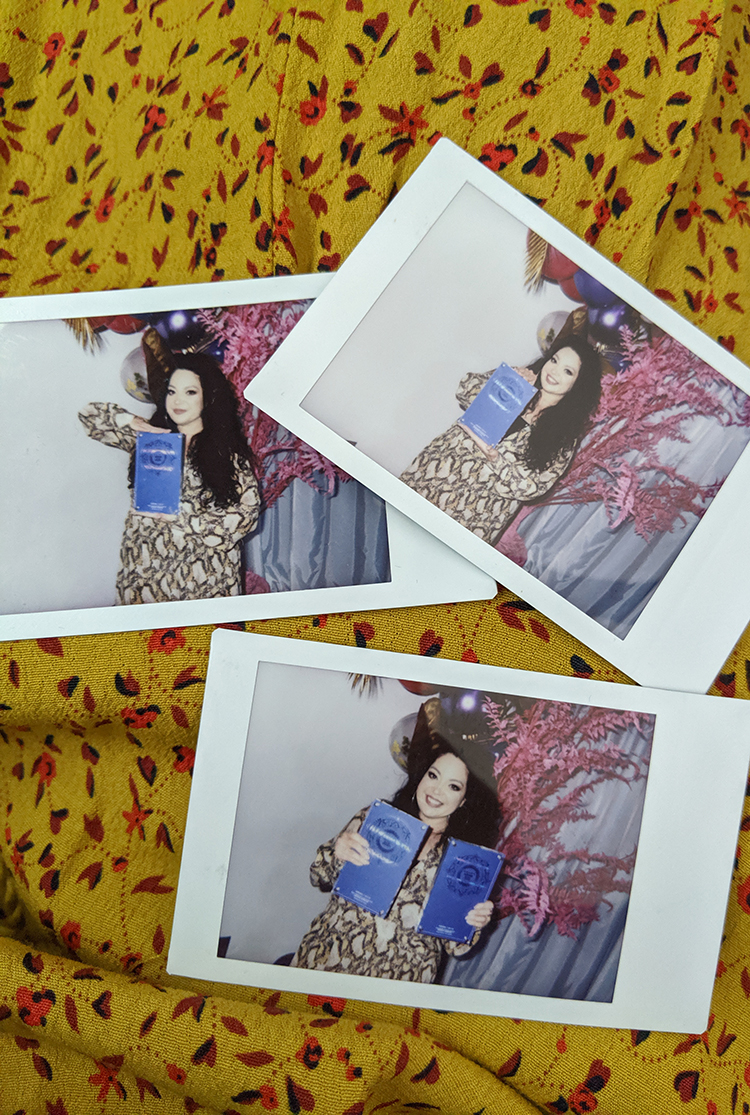 So even though I decided to step down from any nominations in 2018, I thought, f**k it, I might give it a go this past year. And holy crap, did that pay off. First, I found out I won Pinterest’s Best Home Inspiration award which was pretty damn epic (especially as I hadn’t even put myself forward for that one so it came as a total shock). So that was pretty incredible. But less than a month later, I received the Amara Interior Blog Award Best Home Styling Blog AND the Blogger’s Choice Award in the same night. Holy shit.

I can’t describe the feeling of receiving those two in one night – it was utterly insane and I was buzzing for a good week after that, at least. Totally surreal, totally unexpected but my god was I feeling the love. Definitely one of the most exciting things to happen to me in 2019. 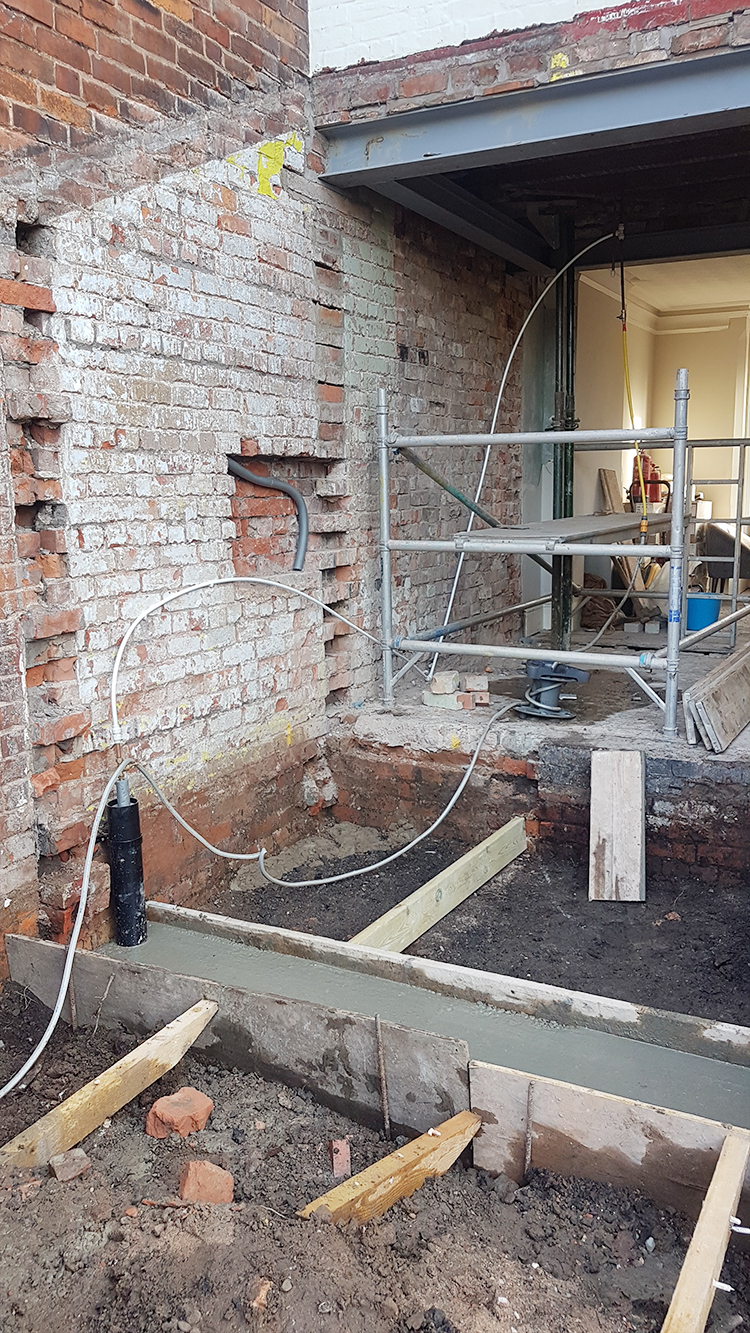 I also somehow managed to plan, project manage and live through the largest building project we’d ever undertaken – knocking down walls and creating a small extension. I admit, from around March until September of 2019, my life was JUST building work, tradesmen and dust. I found it really really hard to concentrate on anything else – not least because I worked with so many different trades on the project (Huge thanks to Karen Harper of Added Value Architecture and John from Hatton Developments who somehow kept me sane) but because my god the house was a disaster zone.

The fact we not only got through it but also managed to create an amazing space at the end fills me with pride. Which leads on nicely to… 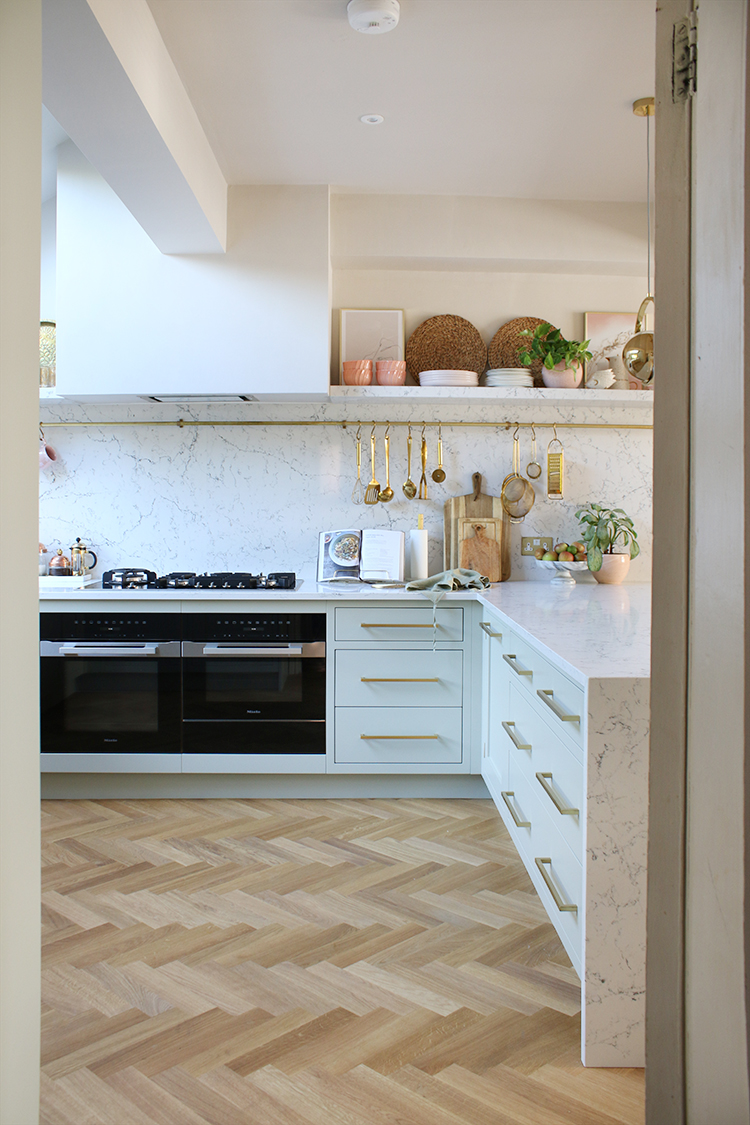 Once the build part of the work was complete, I was incredibly privileged to work with  John Lewis of Hungerford as well as a few other fantastic sponsors on designing and building my dream kitchen. I can’t even express how much I adore my kitchen now and how life-changing it’s been for us. There just aren’t the words. All I can say is what a fantastic partnership its been and how lucky I am to have such a prestigious company believe in me and in my vision and how supportive they’ve been of the whole process. I’m proud to have worked with the team because I think we created something truly beautiful together. 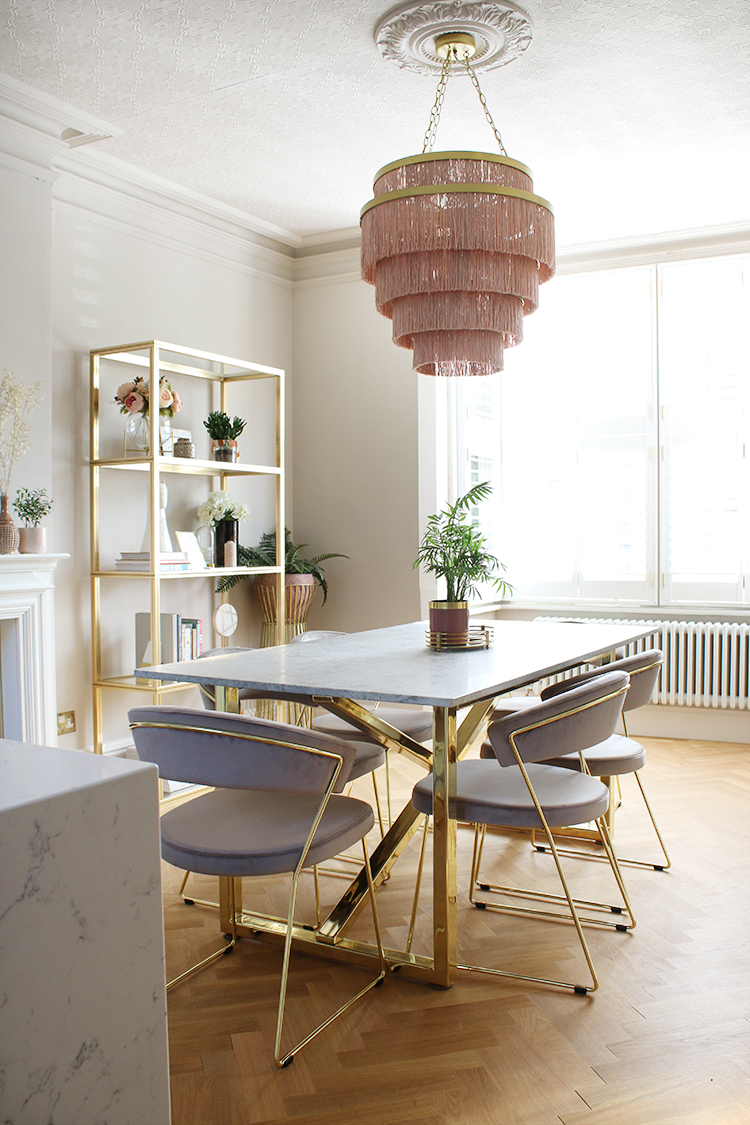 Of course, I can’t mention the kitchen without talking about the adjoining dining room. At the start of the build, it was an afterthought because I didn’t have the headspace to think about it at that point but once the dust settled (literally and figuratively), I was able to update this space as well. I spend a lot of time in here now!! 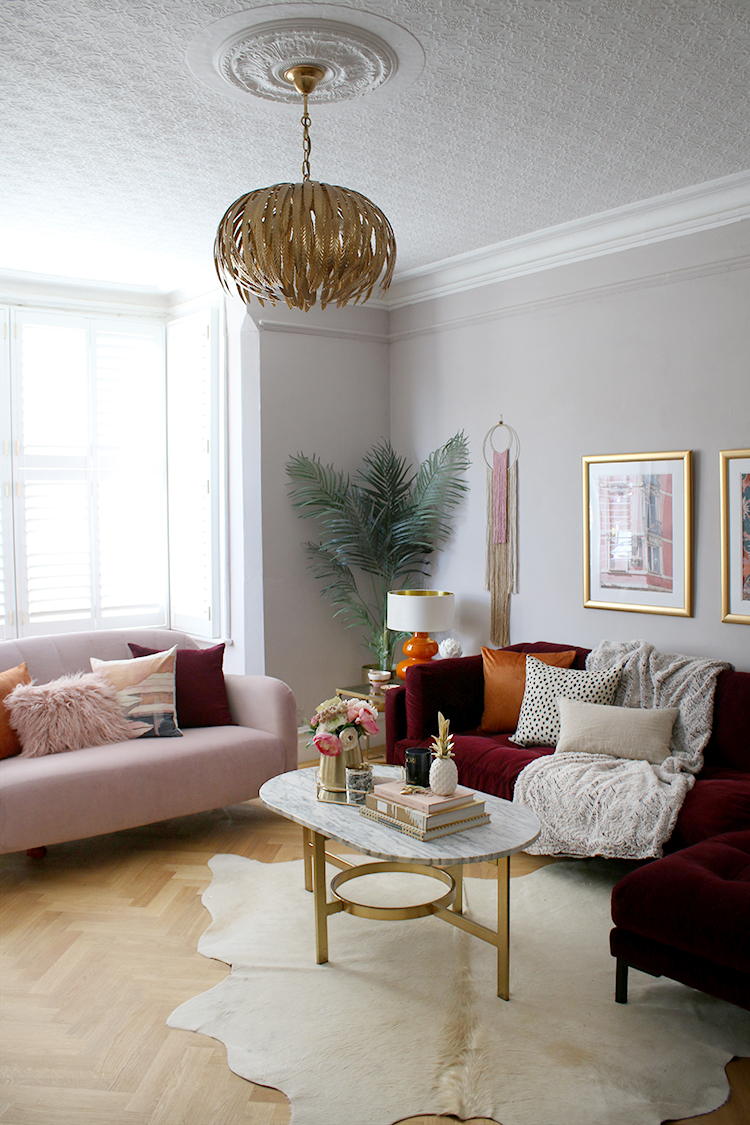 Somehow – because I’m incredibly pig-headed and when I want to do something, little will stop me – the week before the building work started, I decided I couldn’t live with my current living room’s deep purple walls any longer. And so I painted the whole thing and updated the fireplace. Before the kitchen was complete, we also installednew flooring and brought in new sofas. How we managed to do that in between everything else, I’m not sure but we did it and I couldn’t be happier with the cosy space we created. 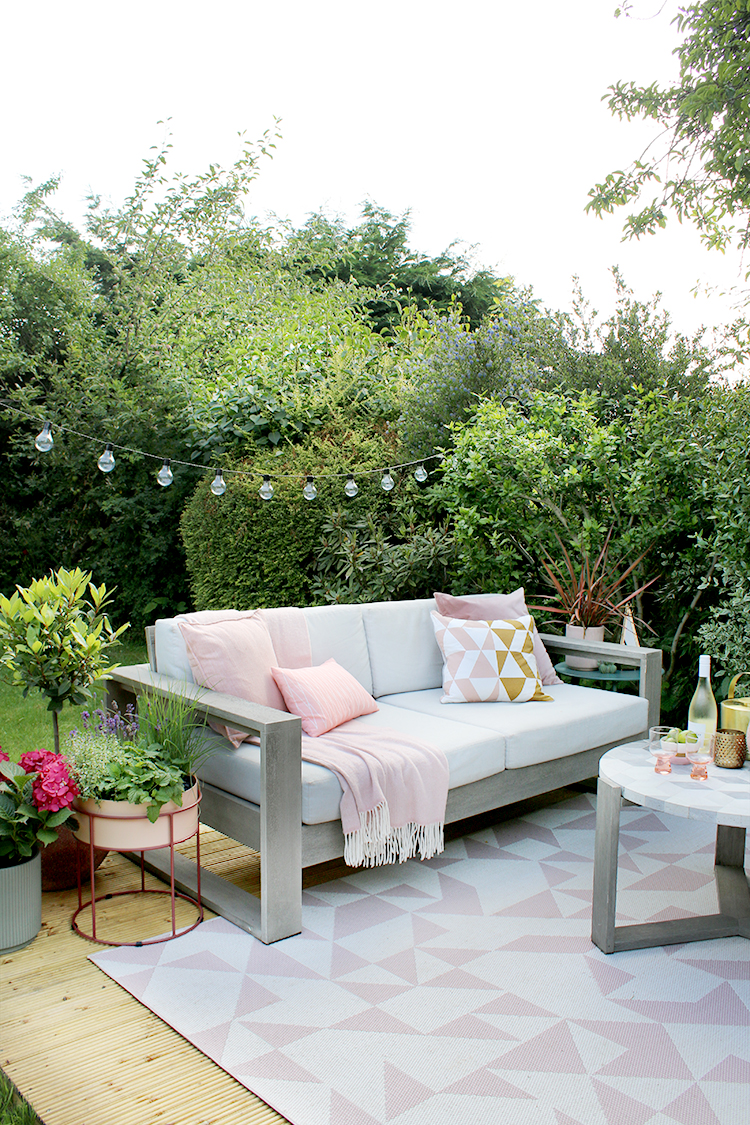 During the time between the extension being complete but before the kitchen went in, we also decided to give the garden a bit of TLC. We spent so much time out here over the summer which was a godsend from all the chaos happening inside the house. I loved this space because it finally felt like we’d made the garden our own and I can’t wait to do more this coming year. 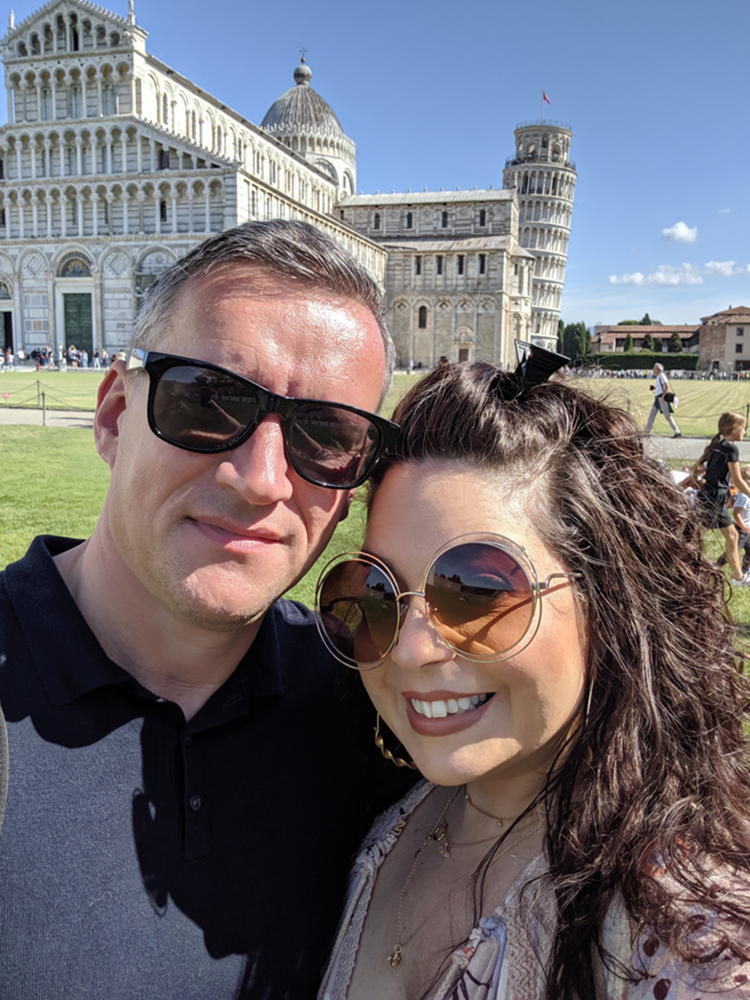 And finally, while it has nothing to do with the house or the blog, we did finally manage a trip away to Italy for a week with friends – somewhere that’s been on my bucket list for literally decades. It was the perfect mix of relaxing with friends in a mountain-top villa and exploring the amazing atmosphere of Lucca, Sienna, Florence and Pisa. We will definitely be back because Italy, I am nowhere near done with you yet, you beautiful country. 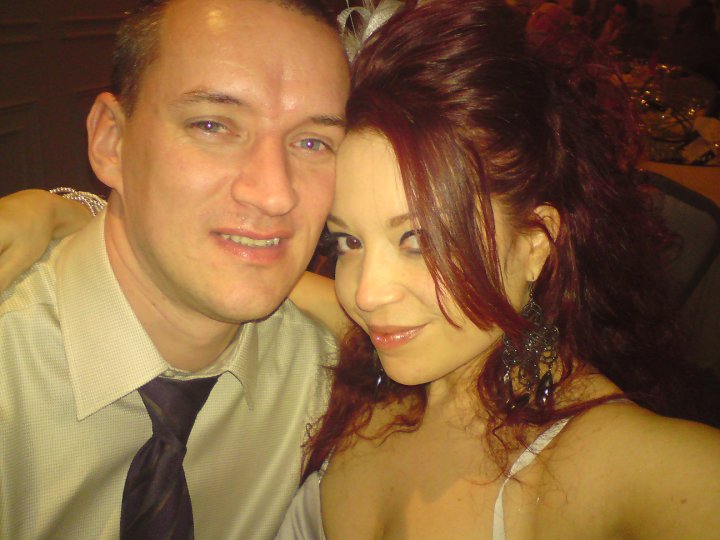 Oh hell, seeing as I posted a recent pic of us, here’s what we looked like in 2010! The babyfaces! (Why did I not appreciate my good skin back then as much as I should have?! Also, why does Wayne just keep getting better looking and I just get more haggard?)

And with that bombshell, I just wanted to wish you a spectacular 2020! I have so many things I want to do this year and I’m so excited you’re here to join in the fun! Remember, you can sign up to my emails to make sure you never miss a post (and as an aside, I’m planning lots of exclusive content I share with my subscribers so you might want to get on that!). The little box to sign up is down below!

Now it’s your turn – what was the highlight of your 2019? I’d love for you to shout out about your own accomplishments (no judgment, just lots of whooping and clapping) and what you’re proud of. Hit me up in the comments below…