It started on Thursday morning. I sometimes have a little browse of my local listings on Facebook marketplace – I’ve been keeping an eye out for a vintage mirror to use for our dining room (no luck there) and some bits for the guest bedroom seeing as the renovation project has, unsurprisingly, eaten into most of my ‘house fund’ account. I’ve always been a fan of buying second-hand – well any time really – but especially when budgets are tight and while there’s a lot of rubbish, you can find the occasional gold. And gold I found. 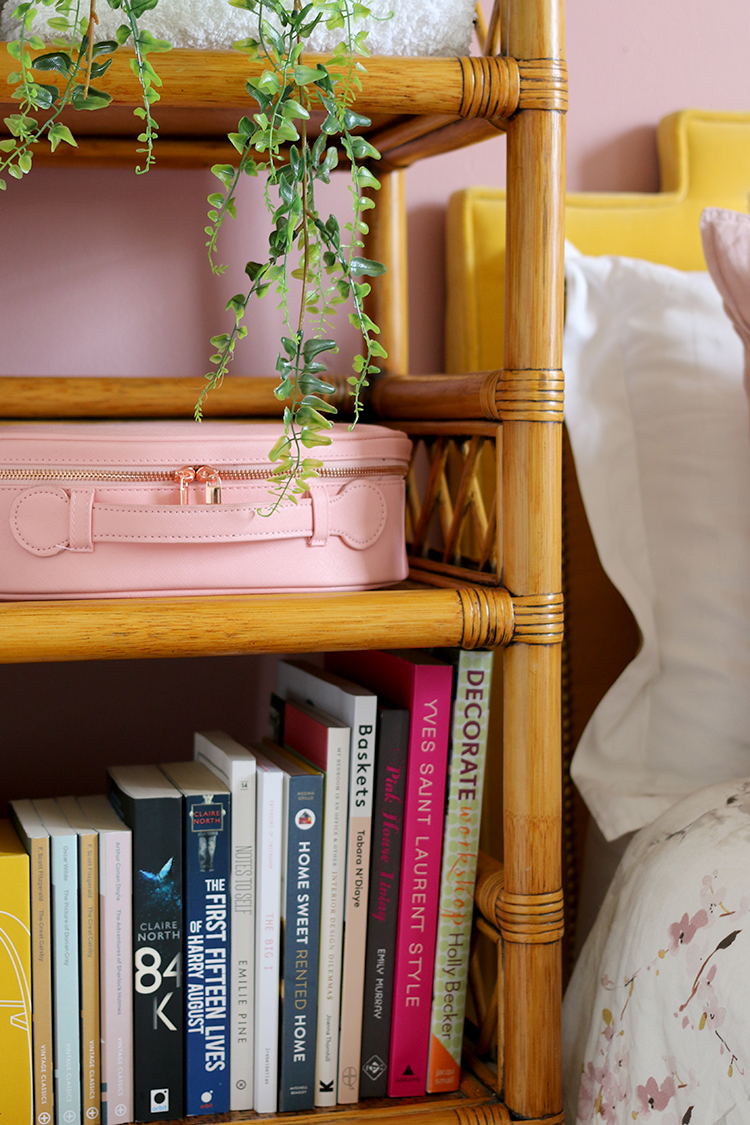 A vintage bamboo and rattan shelving unit for just £25 and they could deliver locally. Boom. I eagerly sent the buyer Facebook’s standard ‘is this still available?’ message and then fearing it may not sound as though I was keen enough, hastily sent another, gushing about the piece and saying how much I loved it and that I hoped she was still selling it. Within a few minutes, she responded – yes, it’s still available, would you like to buy it? A few hours later, her hubby showed up in a van, offloaded this vintage gem and I was a very happy camper.

Of course, Wayne’s first response upon seeing it was, “What is this monstrosity?’ and then quickly changed his tune when I proudly proclaimed it’s bargain price. As he helped me carry it up the stairs, he remarked, “It’s actually really good quality, isn’t it?” probably relieved when I told him it was meant for the guest bedroom where he didn’t actually have to interact with it.

While I am going to continue to share the story with you, I figured you’d probably want to see the finished result so to save you scrolling, here’s the new look… 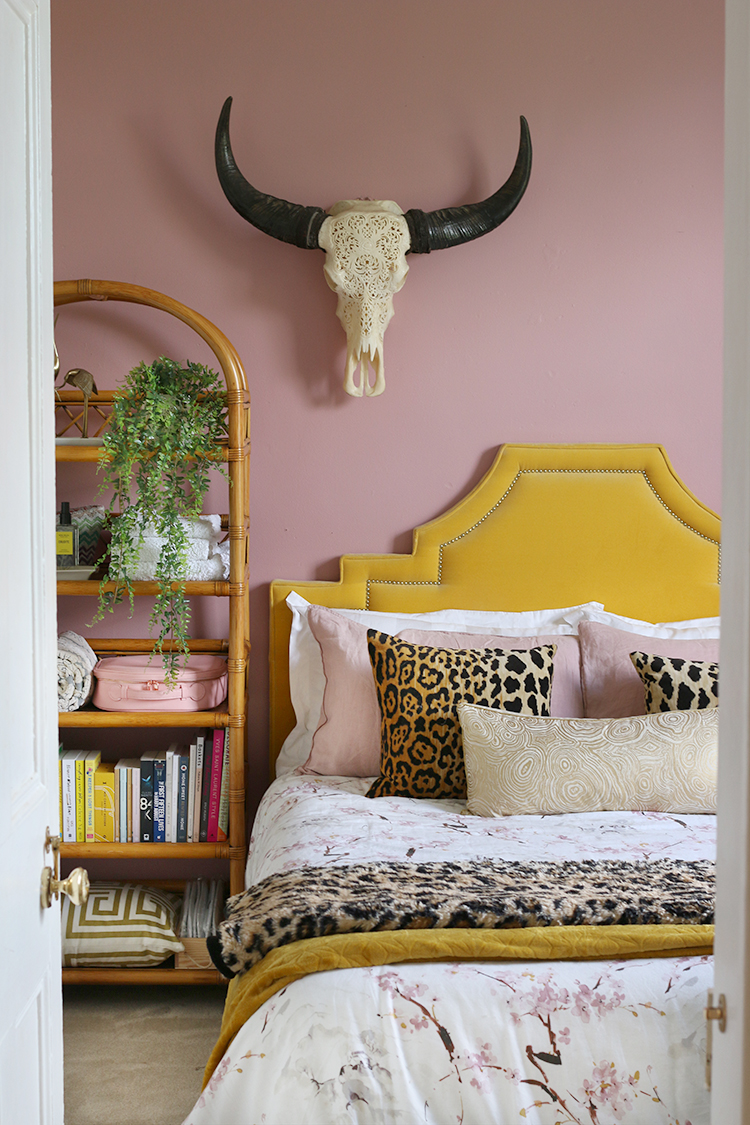 On Friday, I happily spent a bit of time styling it up, realising I finally had a place for my growing book collection and a spot to put some extra towels for guests. It meant I could clear the chest of drawers in here (something in time I’d like to replace as well), allowing more space for a guest’s own things and while I loved the piece, I wasn’t satisfied. 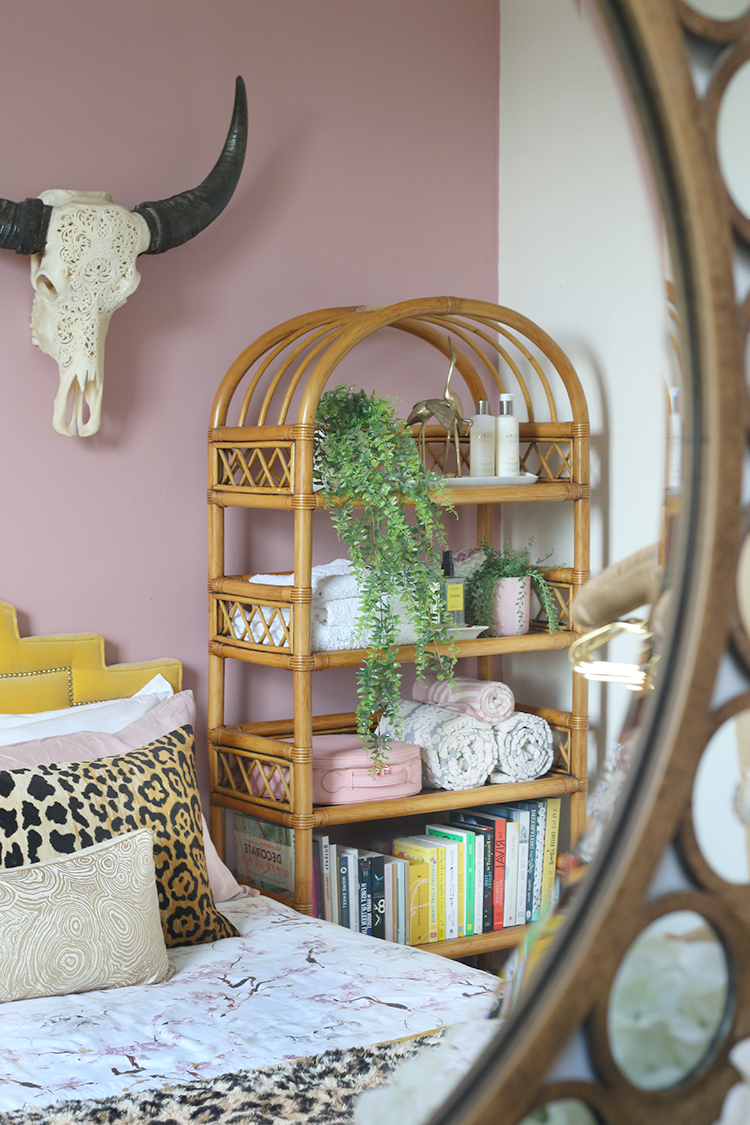 Now let me just pause here to say – despite these shots – this room needs work. Like A LOT A LOT of work. Old lining paper needs removing, probably replastering (including the ceiling) and it needs all new electrics. It desperately needs holes in the walls filling and all the yellowing woodwork repainting and new carpeting too. It’s a big job, probably taking the whole thing back to bare plaster and starting again but the likelihood of that happening any time soon is pretty much non-existent. I’d love to do it all at some point but there are just other areas of the house that are a bigger priority and so it’s pretty far down the list right now. 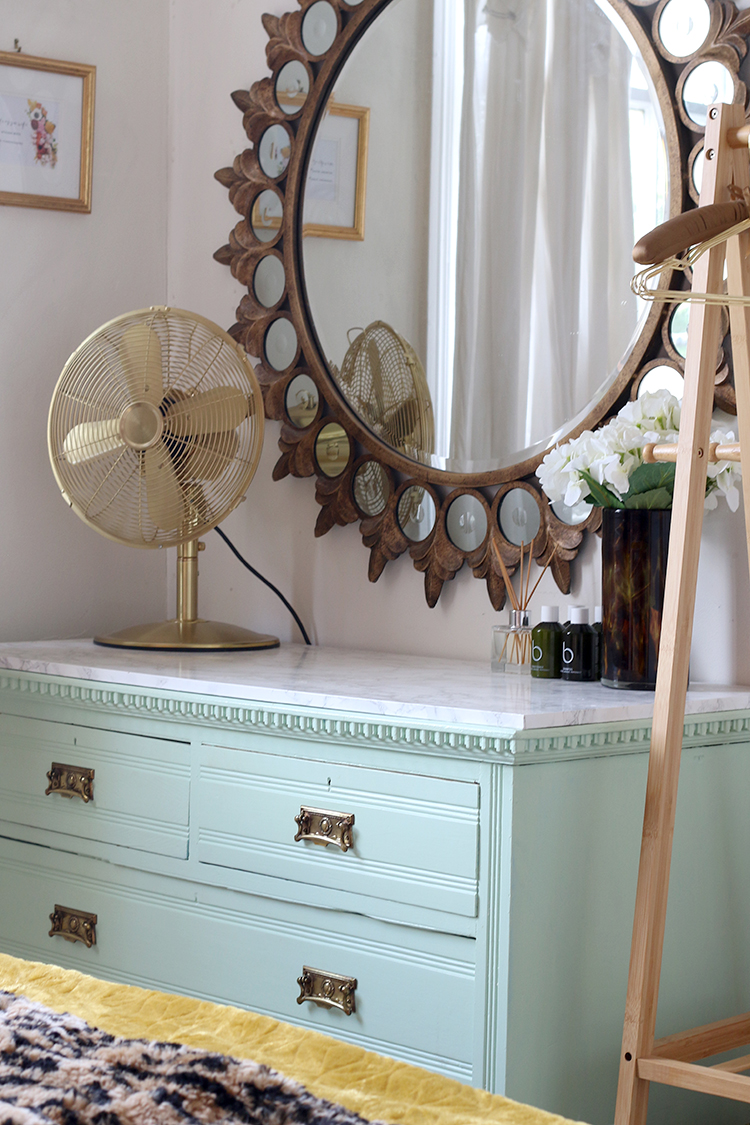 Over the year and a half that we’ve lived here, I’ve done my best to make it at least comfortable for guests (which we have many including my mother in law who comes to stay with us once a month as well as other friends visiting from London and Manchester). You might recall the very first little mini-makeover of this room which I did in a couple of hours, just using stuff I already had 3 days after we’d moved in. So you can say, over the time we’ve lived here, I’ve done a lot of just tweaking including buying a new platform for what was our previous mattress, bringing in the mustard gold velvet headboard we had in our old bedroom, adding the mint green chest of drawers that used to bein my old dressing room, getting a new (old) lamp base from a friend and purchasing a little wood clothing rail for guests to hang their things. 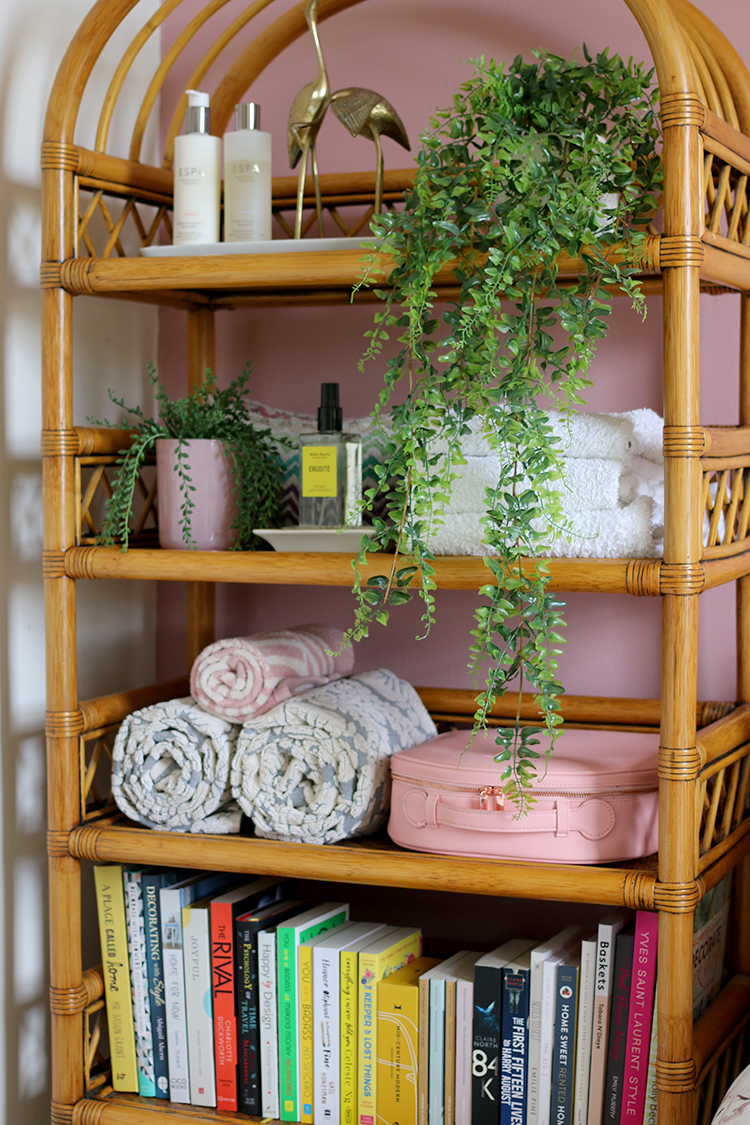 So back to our story and the shelving unit is in and styled up but I still wasn’t satisfied. I went to bed that night and it was either as I drifted off to sleep or early the next morning when I decided I had had enough of the grey-purpley-mauve ‘feature’ wall in the space. I’d been working with it, sticking with a lot of greys and greens in the room but the truth was, I disliked the colour and wanted it gone. 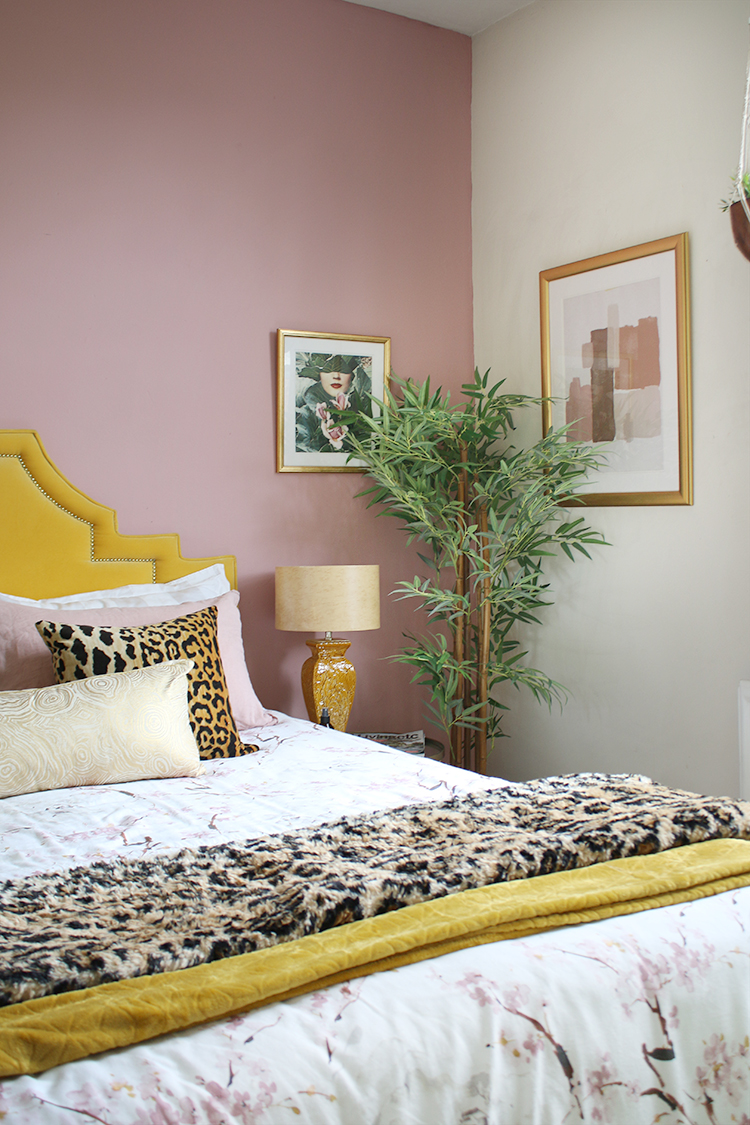 The next morning, I got up and had a look to see what leftover paint I might have knocking about. I realised I still had a good half a tin left of the Little Green Paint Company’s Hellebore that I’d been gifted for use in my vanity/makeup space makeover and knew it’d be enough to just repaint over that feature wall. As much as I would have loved to repaint the whole room, this would have to do for now. And it was something I already had sitting around, so ya know, win-win. Of course, Wayne wasn’t thrilled I was ‘pink-ifying’ yet another space in this house but well, he wasn’t about to argue with free paint and he doesn’t do any of the painting around here anyway. So he didn’t get a say! Ha!

Plus, one of my favourite colour combinations is mustard and pink so I knew that the headboard would really sing against that rosy hue. Within around 3 hours (including drying time), the wall was complete and I put everything back in place again. 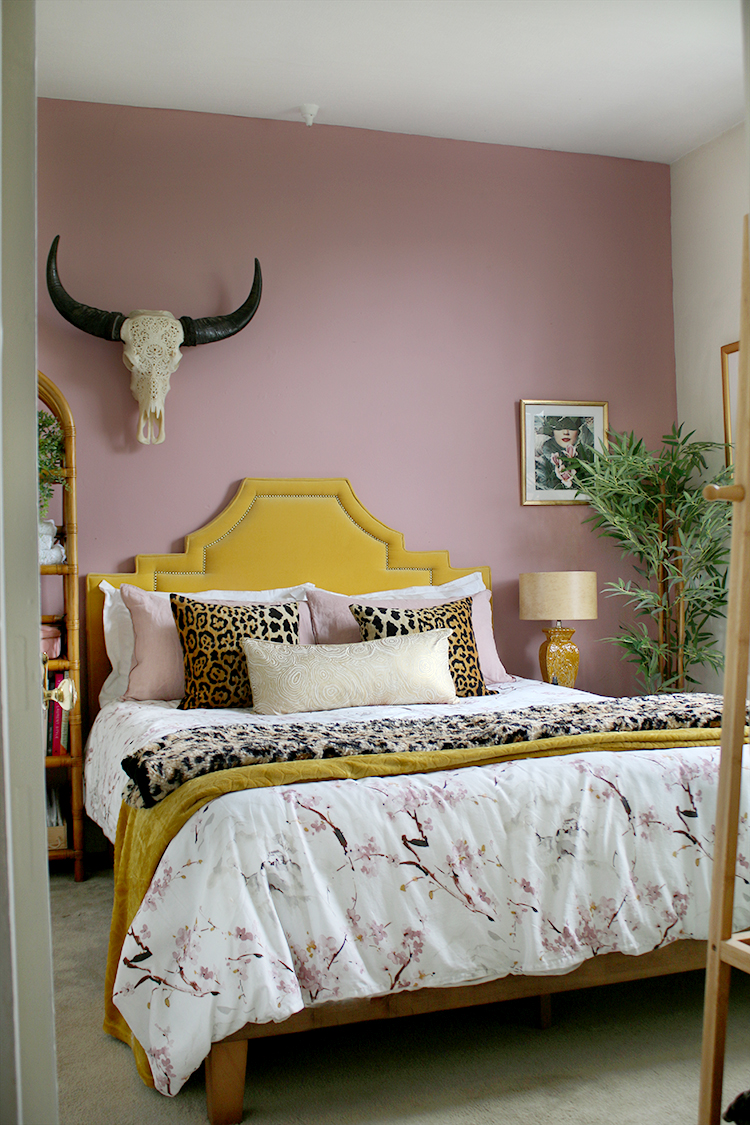 So £25 and around 3 1/2 hours (painting and styling), and the room is looking so much better. I love the combination of the pinks and the golden tones in this space and the view from the hallway is just so much lovelier now. Yes, the room still needs plenty doing to it, of course, but this has made it just that bit bearable for a little while longer. Ahh the power of paint, right? 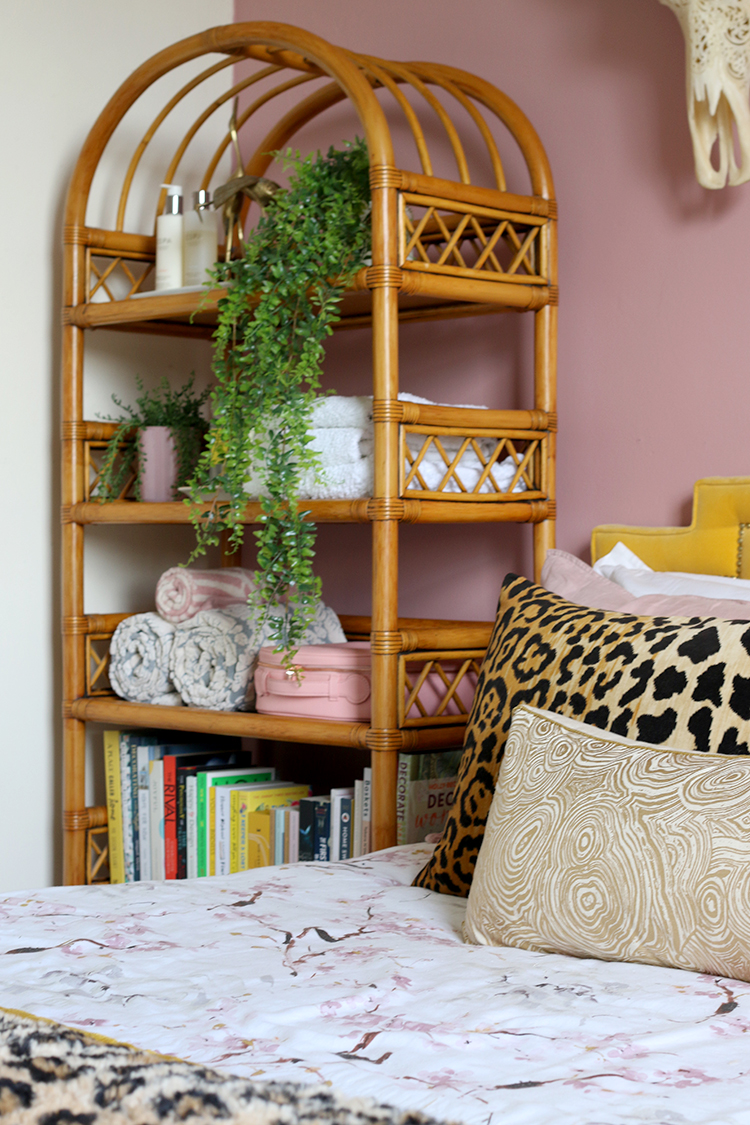 In time, I might do some more tweaking just to make it a little more bareable. I’d like to replace the chest of drawers in here at some point and get some new curtains and a blackout blind, it needs at the very least a pendant shade for the bare bulb that hangs in front of the window. But for now, it’s fine and while I don’t want to spend a lot of cash on it until we can do it all properly, sometimes little changes here and there make a space that much more liveable for a little longer until you can get around to the big spending.

I’d love to know what you think of the changes! Have you done any room-tweaking lately on rooms that need a lot of work just to make them liveable? Let me know below!