The Plans for Our Tiny Mudroom

With the renovation of our kitchen and dining space in full swing, the back entrance of our home has become the natural throughway from the back garden into our home. With tradesmen and pets constantly using the space along with the fact that just outside the door, the earth has been dug up for things like drainage and footings for the extension, the future mudroom can only be described as a sort of war zone buffer between our house and the chaos that lies just outside the doors. 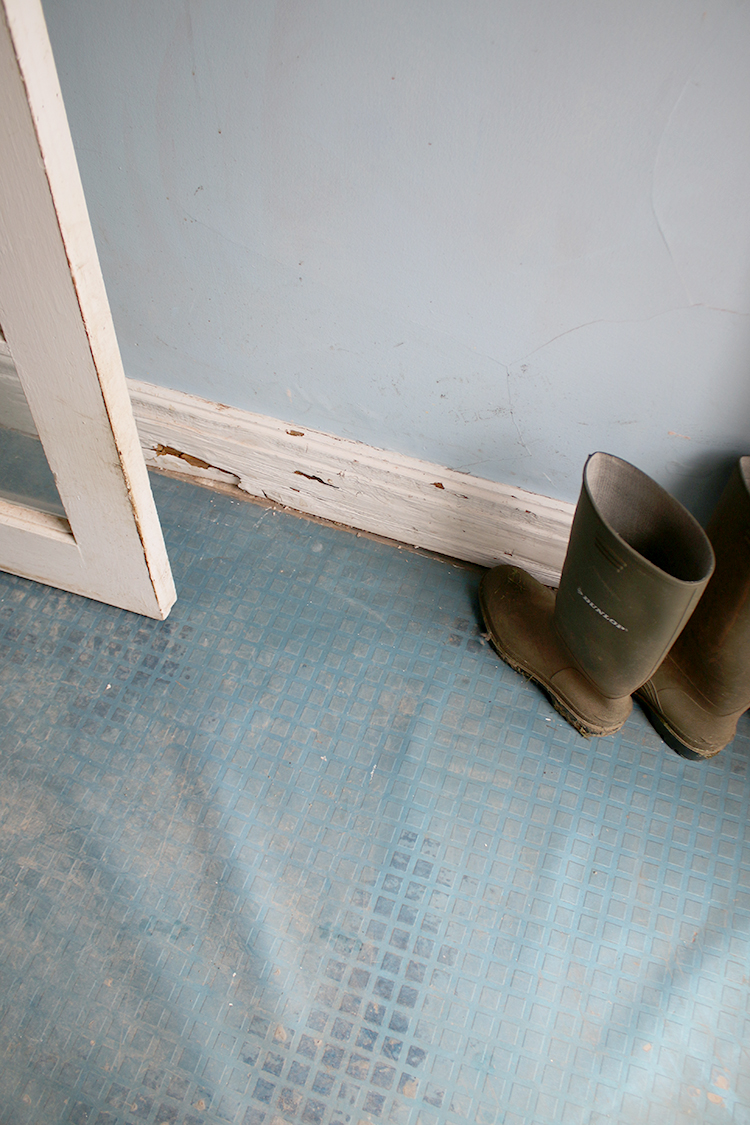 Keeping on top of the mess is nearly impossible and so admittedly, I haven’t tried all that hard – although I took these pictures after the area had been swept and some of the dust hoovered from the walls and doors (so this is on a good day!). The builders have used it to store materials, mud is constantly tracked through it as they access the inside door of what will be our future kitchen that’s just beyond this space. 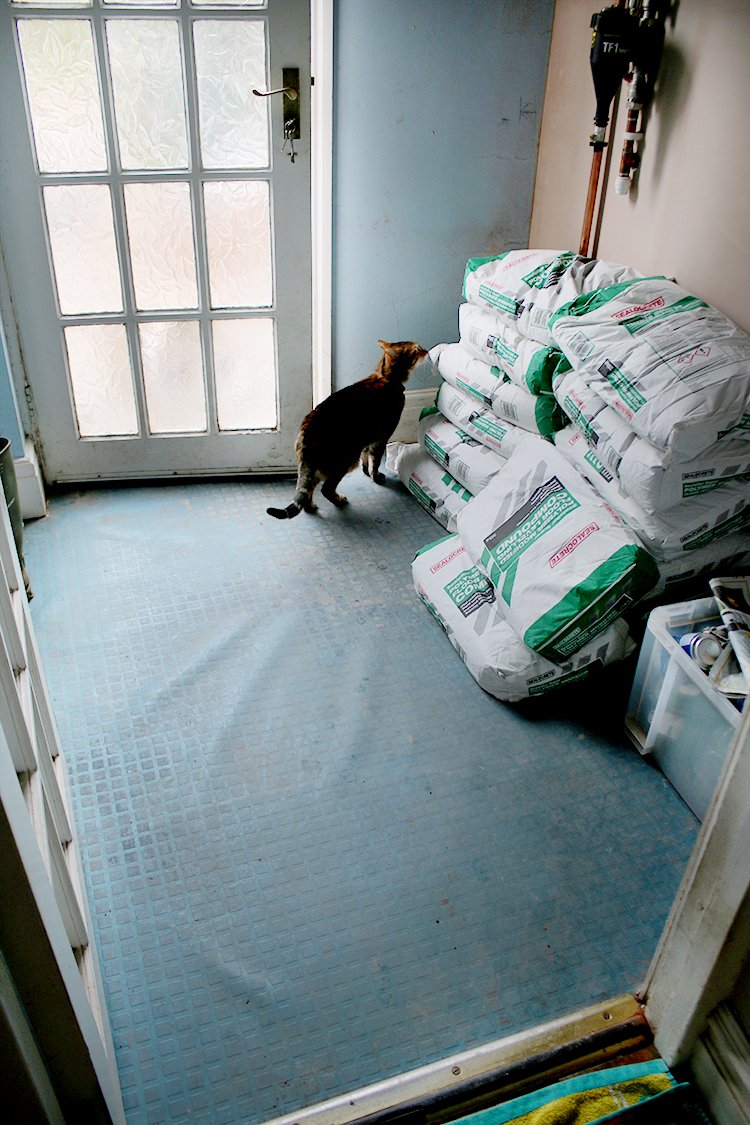 On top of that, we removed the right wall of this little room and moved it about 30 centimetres, making this small room even smaller but gaining valuable space for the kitchen on the opposite side. We also decided that as all this work was taking place, we might as well replace the hot water tank and the old boiler which was housed in here and upgrade the entire system to a very swish new combi-boiler.  And then on top of all that, we had to remove the entire ceiling to access the pipes above it so it’s looking pretty grim in here right now. 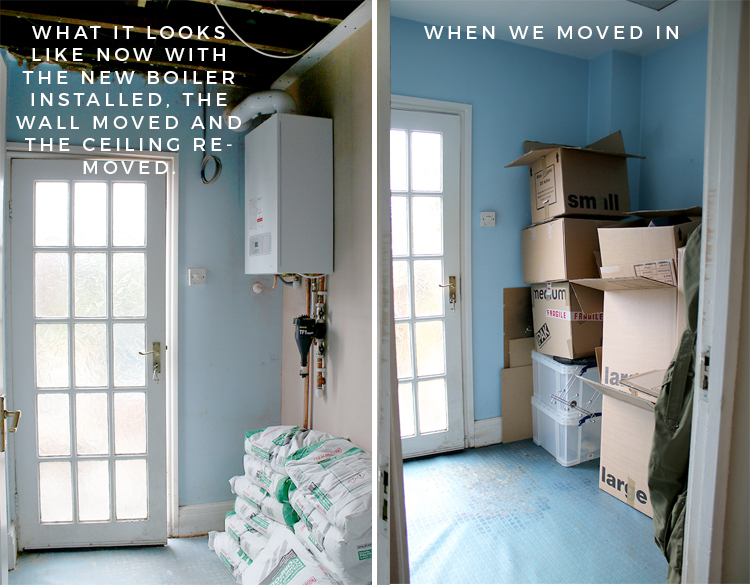 This tiny room has never looked good but, needless to say, over the last month or so, it’s taken a real beating. As we will have a separate utility room in the future (in the space our current kitchen lives), eventually, this little back entrance will really only act as one thing – the through space into our back garden. It’s lucky I don’t need a lot from it. The whole space measures only 180cm long x 165cm wide (about 6′ x 5’5″) and includes the boiler as well as 2 doors which both open into the room. Despite it’s dimunitive size, I don’t want the space completely going to waste. 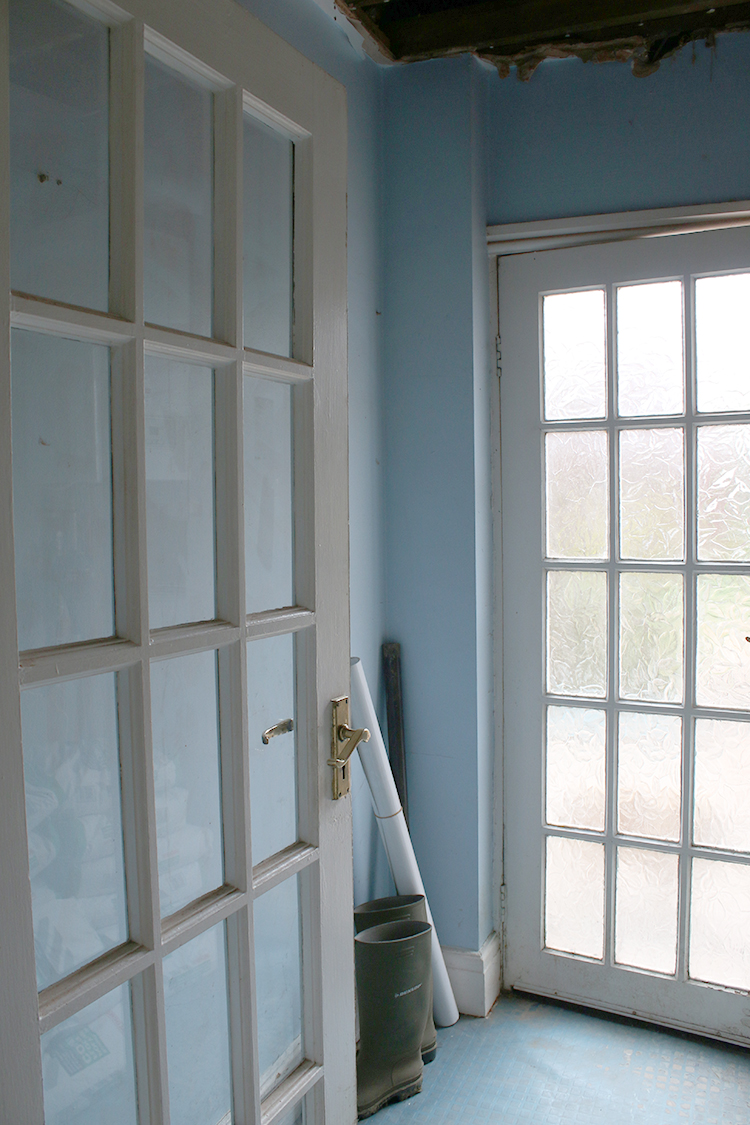 So my plan, once the workmen are finished trashing it, is to create a little tiny mudroom. There’s not much space for anything other than some hooks on the wall and a little shoe rack but sometimes it’s the smallest rooms that you can have the most fun with.

Now, our budget has been really squeezed by this building project. Extensions are expensive. New boilers and plumbing work are expensive. There’s not a whole lot left to kit out an extra room so I’m going to do this on a pretty meagre budget but because it’s so small, it does mean I don’t need to do much to make it look a whole lot fresher.

This post may contain some affiliate links which means if you click on a link, I earn a small commission from the brand as a thank you for the referral. You’ll never pay more when clicking these links. 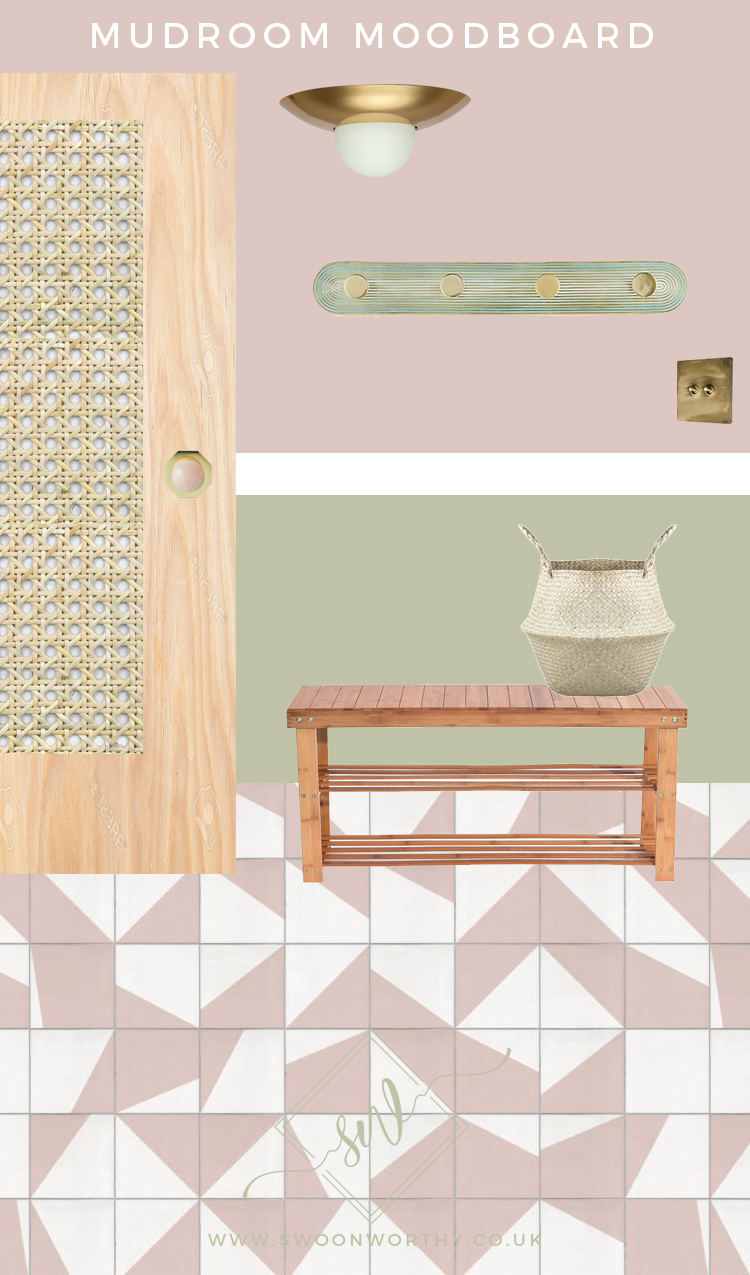 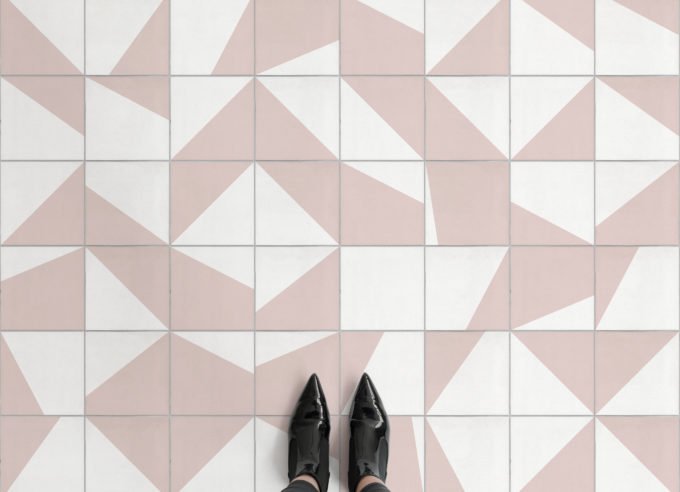 For the floors, I fell in love with Astrafloor’s vinyl flooring in the Zoe pattern. It will be the priciest part of this project and yes, I can probably find cheaper but this pattern has taken my heart. Plus, vinyl will be perfect for this space – super hard-wearing and super easy to clean. While I love the look of clay tiles, I don’t want the upkeep, especially in an area which will get heavy footfall. So this flooring is the perfect compromise, getting the look of clay tiles with none of the maintenance issues. Plus, how cute is a pink floor?! I just love it.

On the upper half of the walls, I’m going to try and match the pink of the flooring so it’ll be a fun two-tone effect with a white stripe acting as a sort of ‘chair rail’ separating the two colours. Paint is always transformative and it’s quite inexpensive too so I’m hoping that soft pink colour should envelop the room (I’m using it on the ceiling too!), reflecting a warm light inside this teeny tiny space.

Wayne is also going to box in the boiler so we don’t have to look at a big white box and lots of pipework. The plan is to use MDF (his preference) or plywood (my preference) which incorporates rattan cane webbing in the door to give the space some texture as well as ensure there’s plenty of airflow around the boiler itself. If we use MDF, we’ll have to paint it but I quite like the idea of the softness of the plywood adding some warmth in here. We’ll see who wins that one! ;) 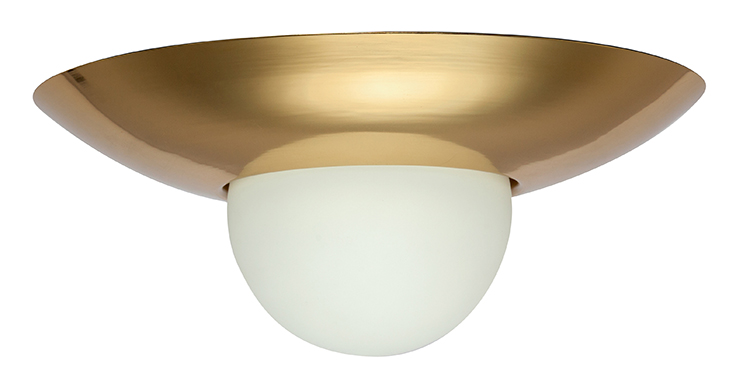 The ceiling in here is quite low as above this space is our family bathroom and the pipes needed to be hidden so there’s not enough head height for a hanging pendant. I’m planning on using houseof’s flush dome ceiling light in brass (gifted as part of the kitchen collaboration) which should add a touch of glam. 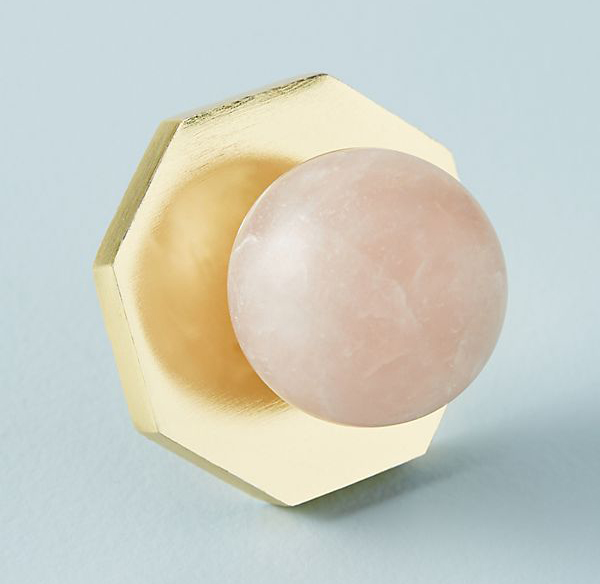 Speaking of glam, I also want to use a pretty knob on the door of the boiler.  This one from Anthropologie is quite a little stunner and should marry well to the ceiling light as well as the pink flooring. Hey, it’s all in the details! 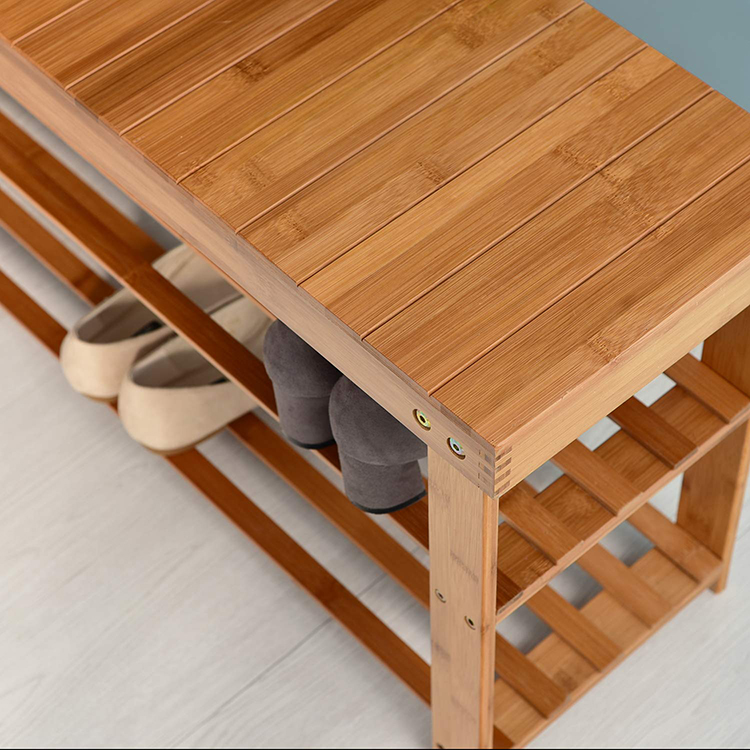 I’m also planning on having a small bench and shoe rack in here – just something really simple in wood to allow us a place to sit and remove our shoes before coming into the house. This one from Amazon is a good fit for the space and is a bargain buy as well. 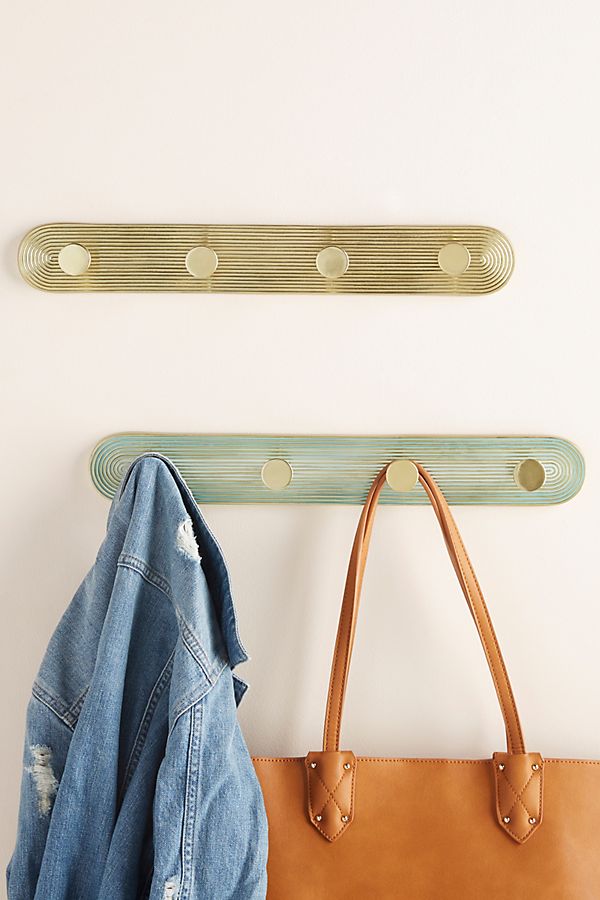 For hooks, I’d love to use Anthropologie’s Ruth hooks which come in a lovely soft green colour. They aren’t cheap and I’ll probably need three of them (one for above the bench, two along the opposite wall) so we’ll see if I manage to squeeze them in the budget. If not, then I may end up using the existing 3 sets of hooks we are currently using in our kitchen which are pretty gorgeous anyway (you can see them here) – they were originally purchased from Rowen & Wren and I’m not entirely sure if they’ll be put to use in the new kitchen so they aren’t going in the kitchen, I’ll use them in here instead. 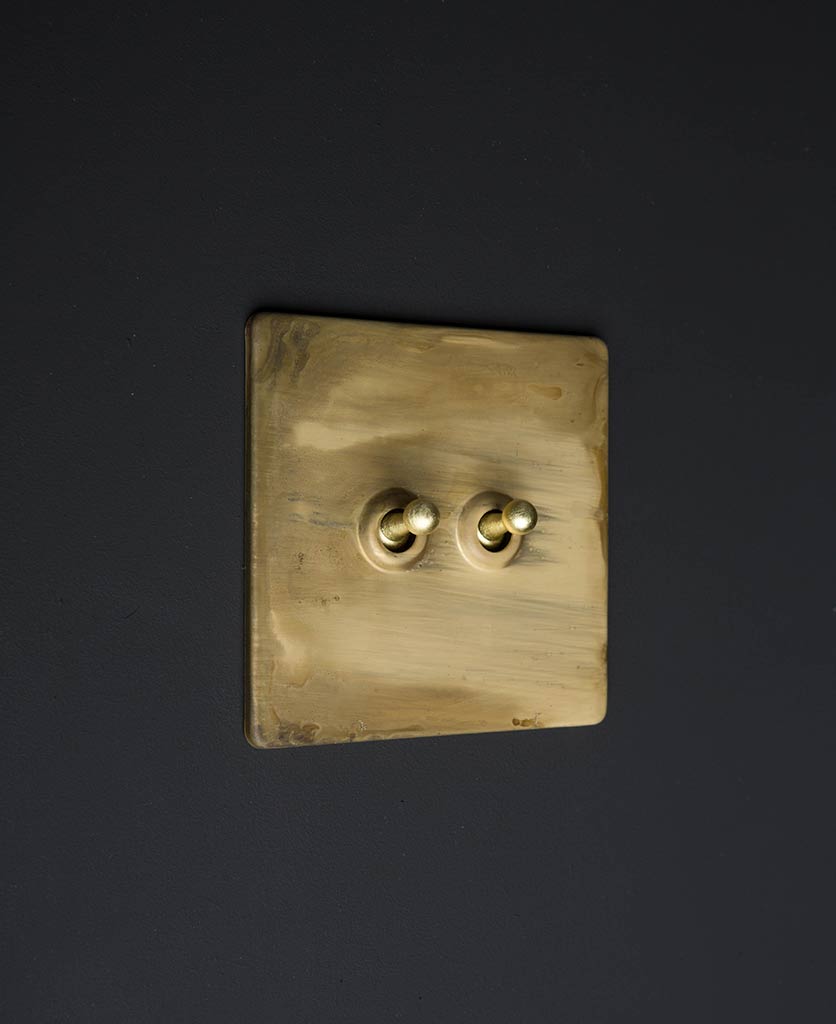 Finally, I’m very lucky to be working with the lovely Dowsing & Reynolds in the kitchen and dining room. They are generously supplying the sockets and switches so I’m going to be choosing this beauty for the light switch. Again, with a really tiny space like this, every single detail counts and I think this will just finish off the room so beautifully. 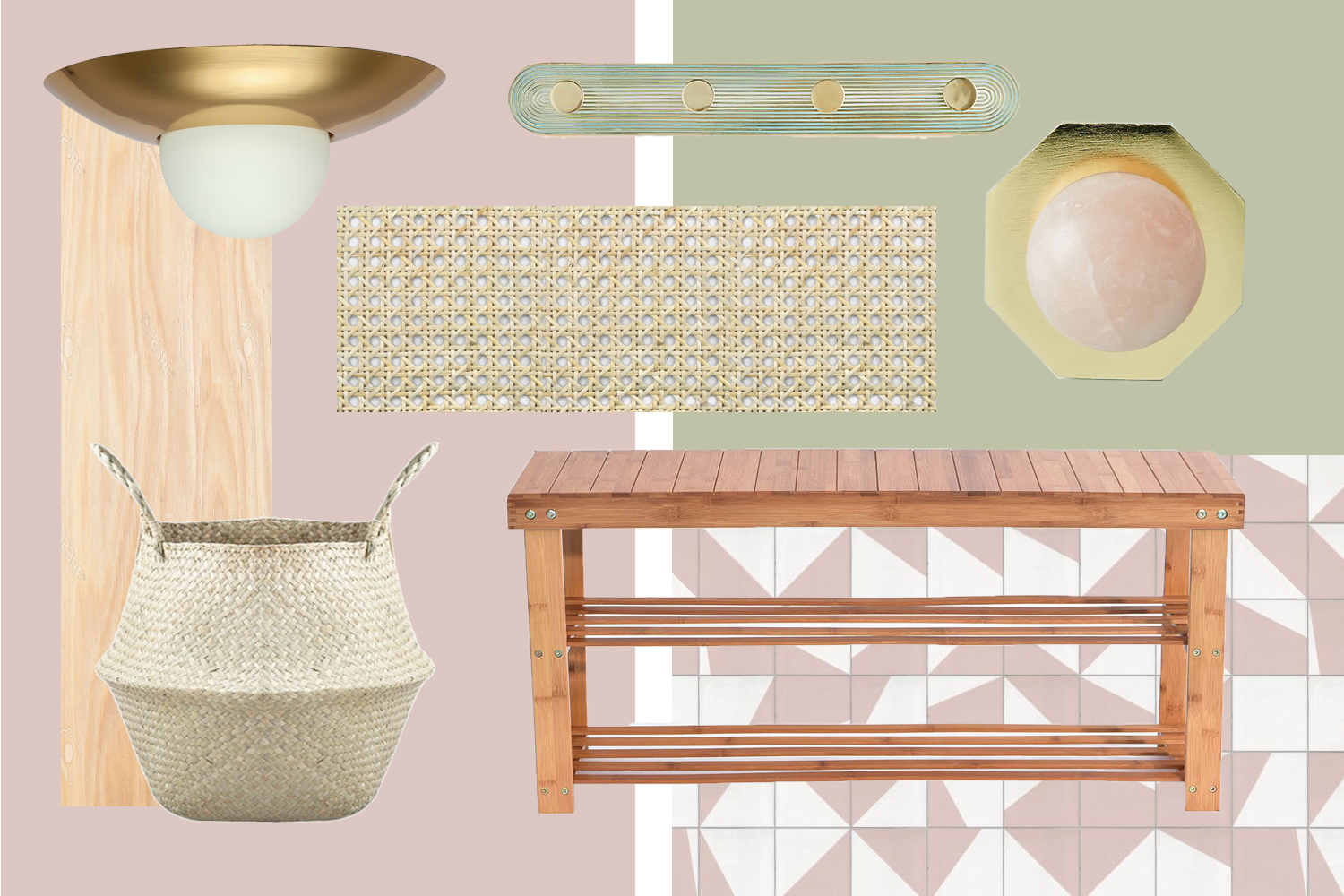 So that’s my plan for the new tiny little mudroom. Given its current state, it’ll be a little while until I can create the space but I don’t want to wait too long so it’ll most likely happen either between the shell being finished and the kitchen being installed or just after the kitchen is installed. And to be honest, it shouldn’t be too hard to implement these plans – it’s just painting, boxing the boiler and installing the flooring so I’m hoping we can get it all done pretty quickly and we don’t have to look at this crusty space for too much longer! Of course, I’d love to know what you think of my plans! Let me know in the comments…