How I’m Making Do With an Ugly Kitchen (For Now)

So I asked the other day on Instagram what you’d like to see next on the blog – our plans for the garden or my ugly kitchen. And, funny enough, the majority chose my ugly kitchen in the poll. We are always told as bloggers that people want to see beautiful, aspirational images (and I do too!) but what I think is really going on is that you want to know that those of us who blog about interiors are pretty much just like you. Because we are! Yes, we have ugly rooms that we haven’t gotten to quite yet and while I shared my very not-up-to-standards dining room with you recently, that clearly wasn’t enough. So here we are, continuing the ‘before tour’ as we have a look at my kitchen. 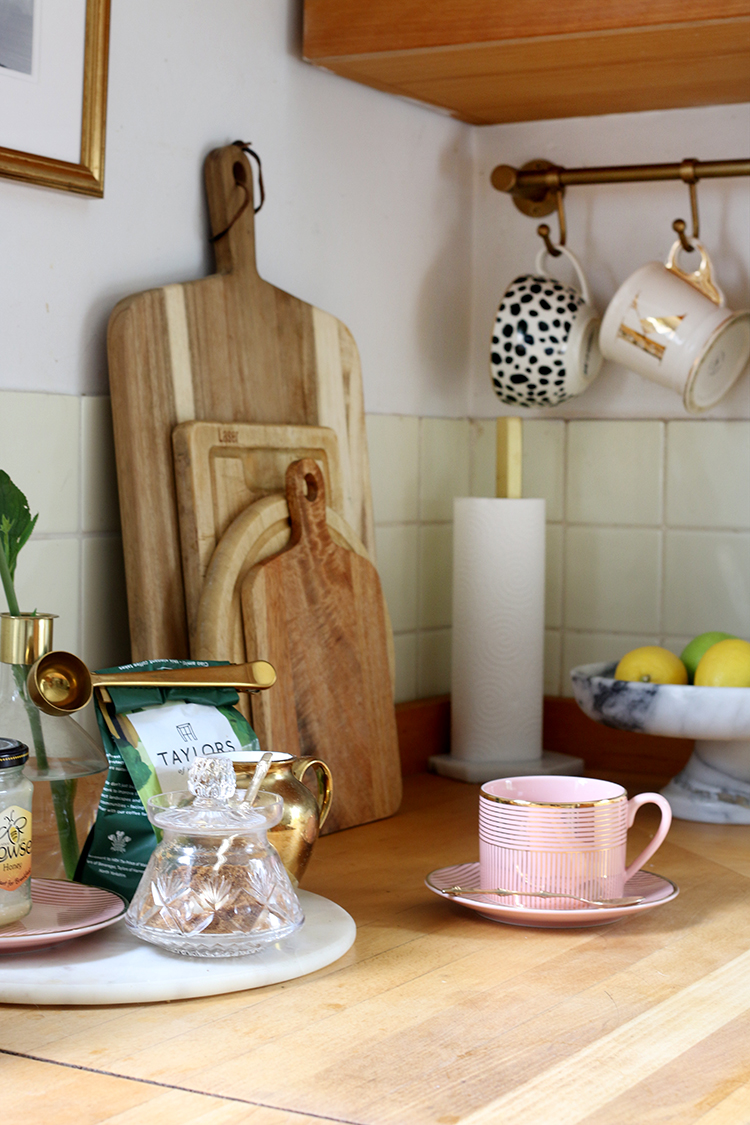 If you aren’t already aware, we are planning on a huge remodel of our downstairs over the coming months. This remodel will see a small extension going in what is currently the utility room and downstairs bathroom and the kitchen will be moved into that space on the opposite side of the house. So this kitchen is purely temporary for us until that one is completed. Because every single penny is being sunk into that remodel, I don’t want to spend a solitary quid on this space. Like – nothing. Not even paint. It’s just pointless seeing that work will start soon.

I also know that as soon as I update or change one thing, I’m going to want to change other things and before ya know it, I’m £500 deep in renovations. So probably best for me to not even start down that road. It’ll only end in tears – or an empty bank account.

But in the meantime, I thought perhaps this might be a bit helpful for those of you living with less-than-stellar kitchens – especially for those of you who are renting where you can’t do much to change your current decor or those who are prioritising other projects in your homes and just have to live with what you have for now.

So I’m going to chat about what I’ve done to make this kitchen just a little more liveable for now and then I’ll talk about what I would do to give it a budget refresh if we were going to be living with it longer. So hopefully this isn’t just a ‘look how ugly my kitchen is’ post – it’s actually going to help you out if you find yourself in the same boat as I am in!

Here’s what it looked like when we moved in… 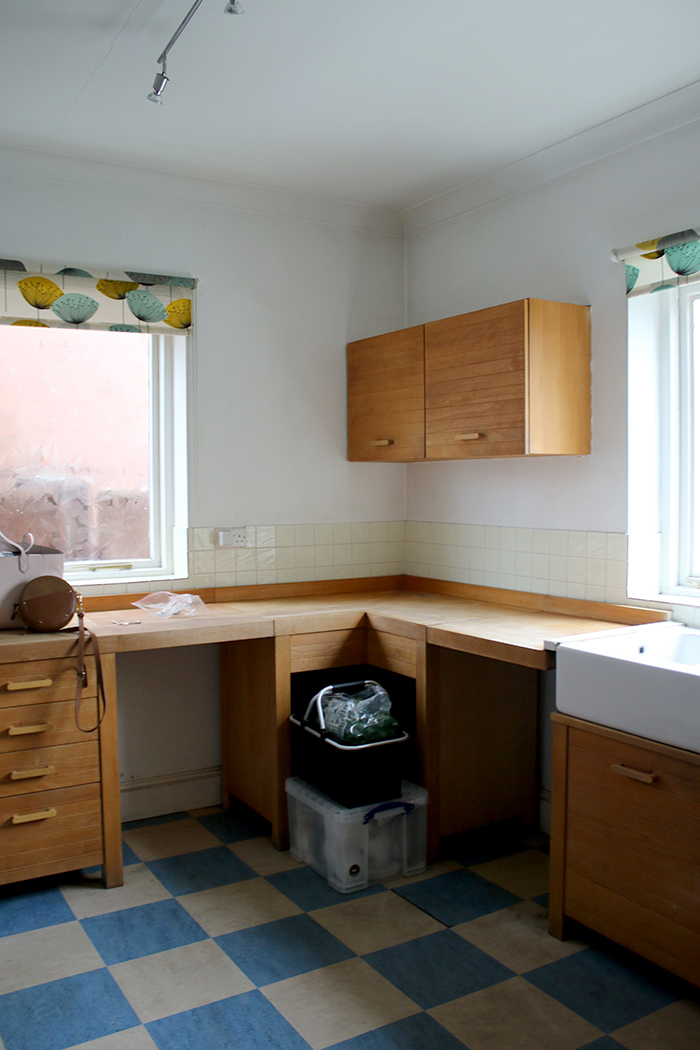 As a bit of a reminder, here’s what we were faced with when we moved in (you can see the whole empty house tour here). The kitchen is in the back of the house and north-facing which means despite the fact there are two windows, it’s pretty dank and grim back here most of the day (not helped at all by the decor). The units themselves are actually not that bad (I’ve had a few people remark they actually quite liked them) and while they aren’t really my style, they aren’t in terrible condition. 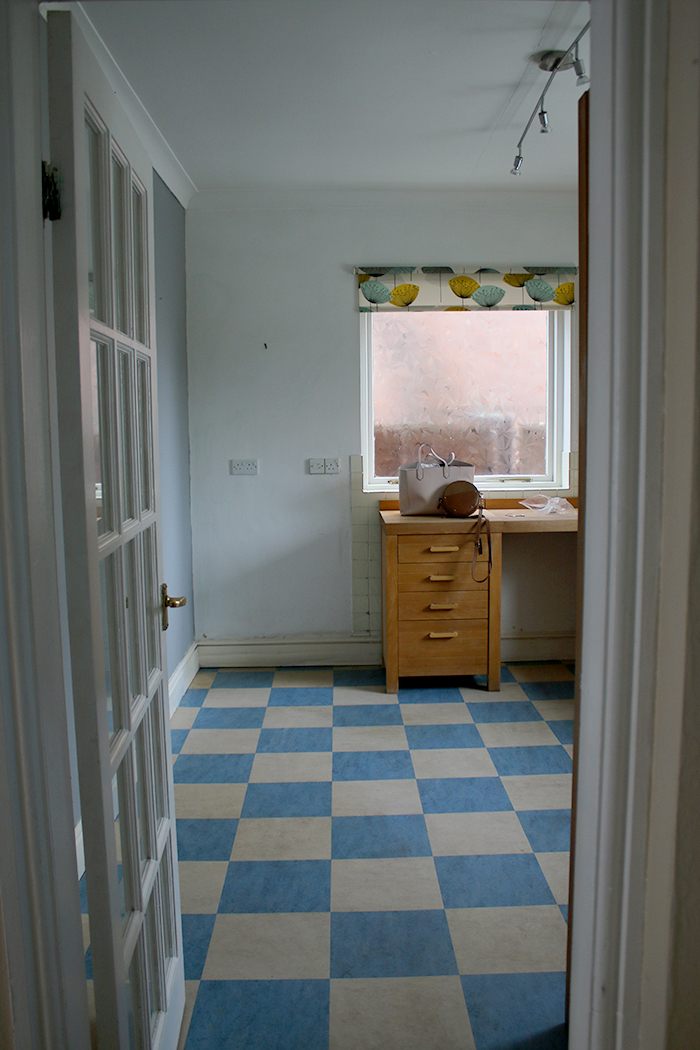 What is in terrible condition, however, is that flooring. It doesn’t matter how much I clean it, it remains looking dirty and ugly and stained. I’d guess they’ve been in here for quite a long time but the blue and beige colourway just doesn’t do the space any favours at all and it desperately needs ripping out. I absolutely detest it. 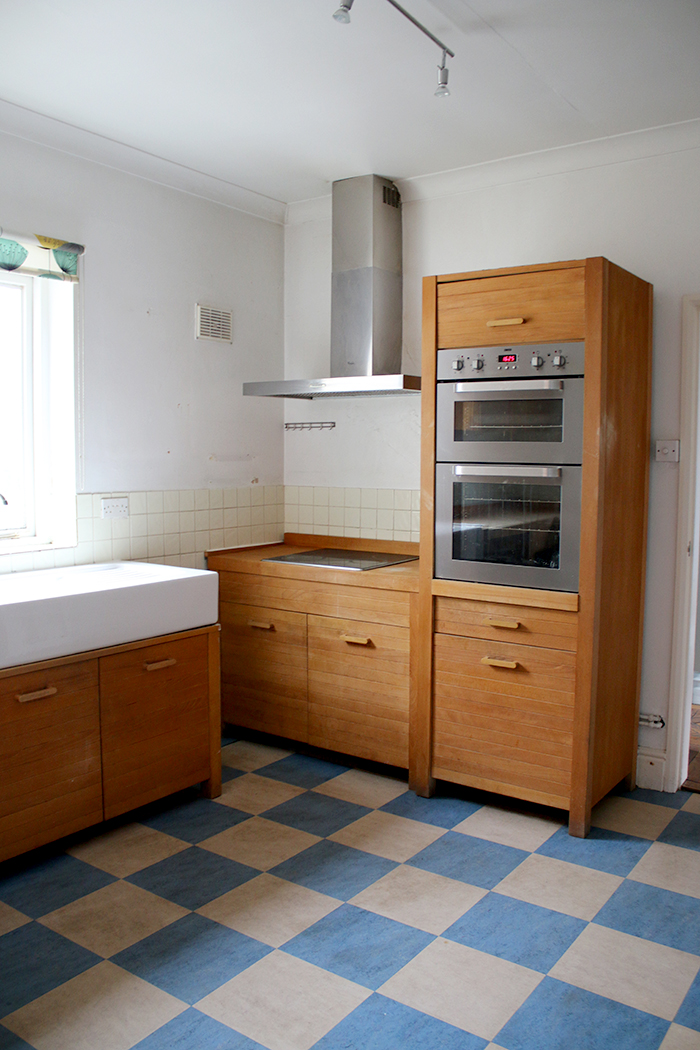 The walls are in desperate need of patching and painting as well. There are marks, stains, holes and chipped paint pretty much everywhere in the room and there’s one inexplicable blue wall that doesn’t even match the flooring. It’s just very tired and very unloved. The lighting is also awful – 90’s cheap chrome spotlights – not my favourite way to light up a room personally but there are certainly better alternatives on the market today. 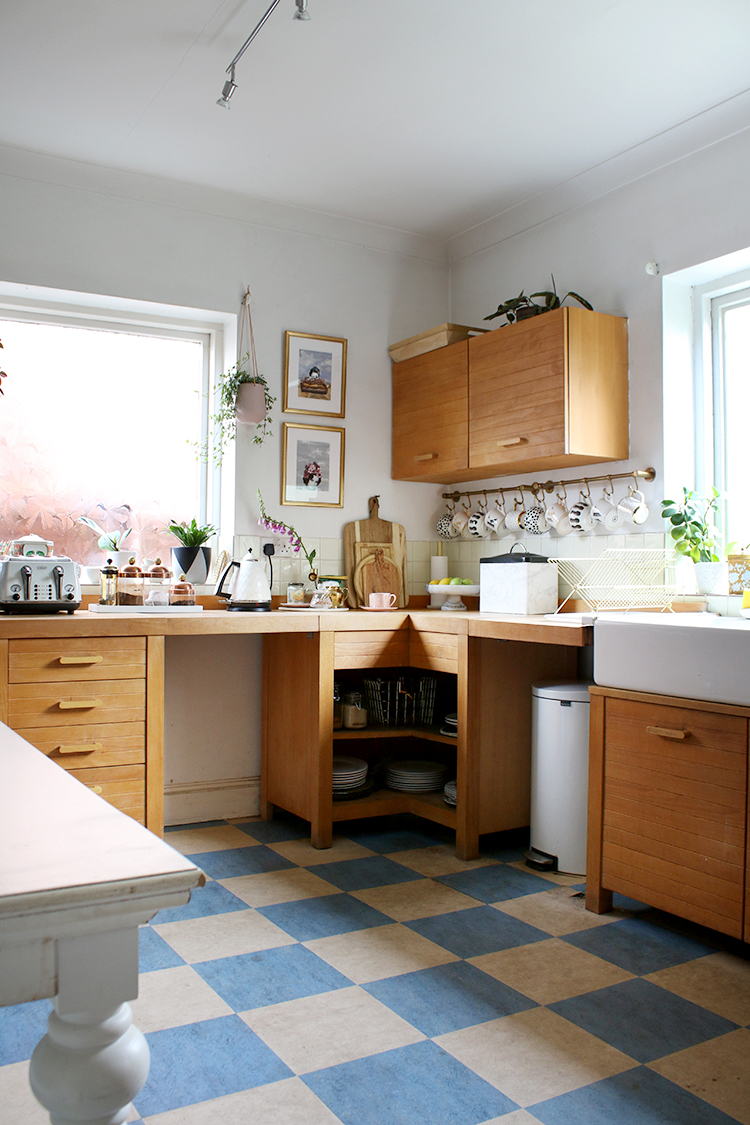 So this is what the kitchen looks like now and here are some of the ways we’ve made it a bit more liveable.

Additional Storage: Something we very quickly realised as we unpacked is that there simply wasn’t enough areas to store all my various kitchen bits. I am a collector when it comes to pretty kitchenware and while I used to have some lovely open shelving in our old kitchen to store it all, I very quickly ran out of space for everything here. 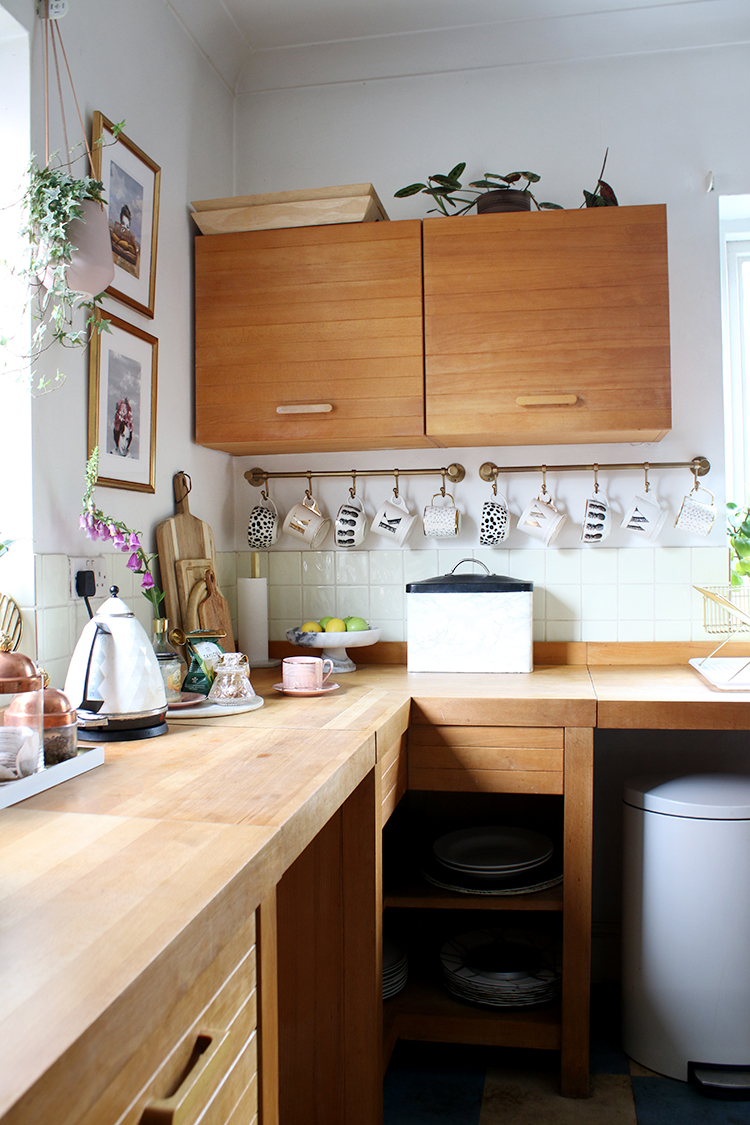 I was able to hang my mugs on the little brass hanging racks under the upper cabinets which allow me a little area for display and utilised the open shelving on the bottom cupboard to house plate sets as well as some of our dry goods. 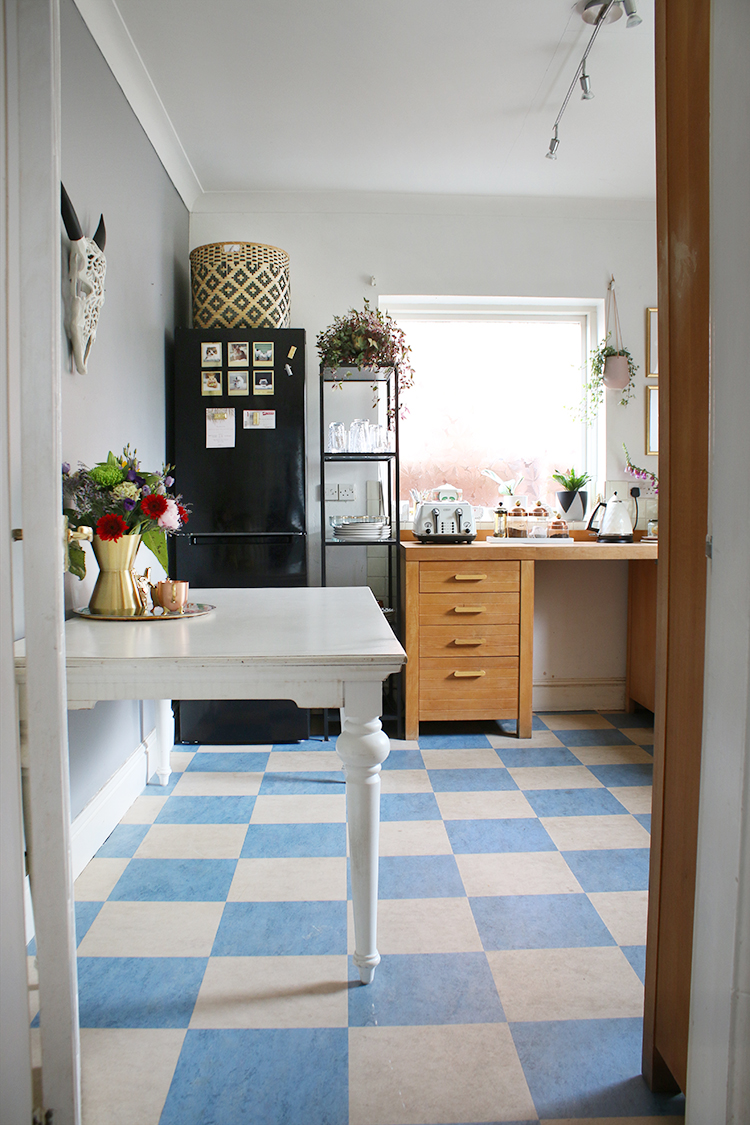 I also moved in the IKEA Vittsjo shelving unit that used to live in our glam cave. It’s been brilliant for everyday items that we are constantly reaching for and it fits perfectly into the gap next to the refrigerator. Additional Prep Space: You may also notice that we put our old white wood dining table in the kitchen as well. It’s a little worse for wear now as it was stored in our shed most of last year (!) but we figured we might as well make use of it whilst we had it! We also had chairs in here initially and then realised quickly we prefer to eat in the dining room so the chairs were removed. The table, however, comes in handy because there aren’t enough worktops in here and it provides some very necessary prep space! 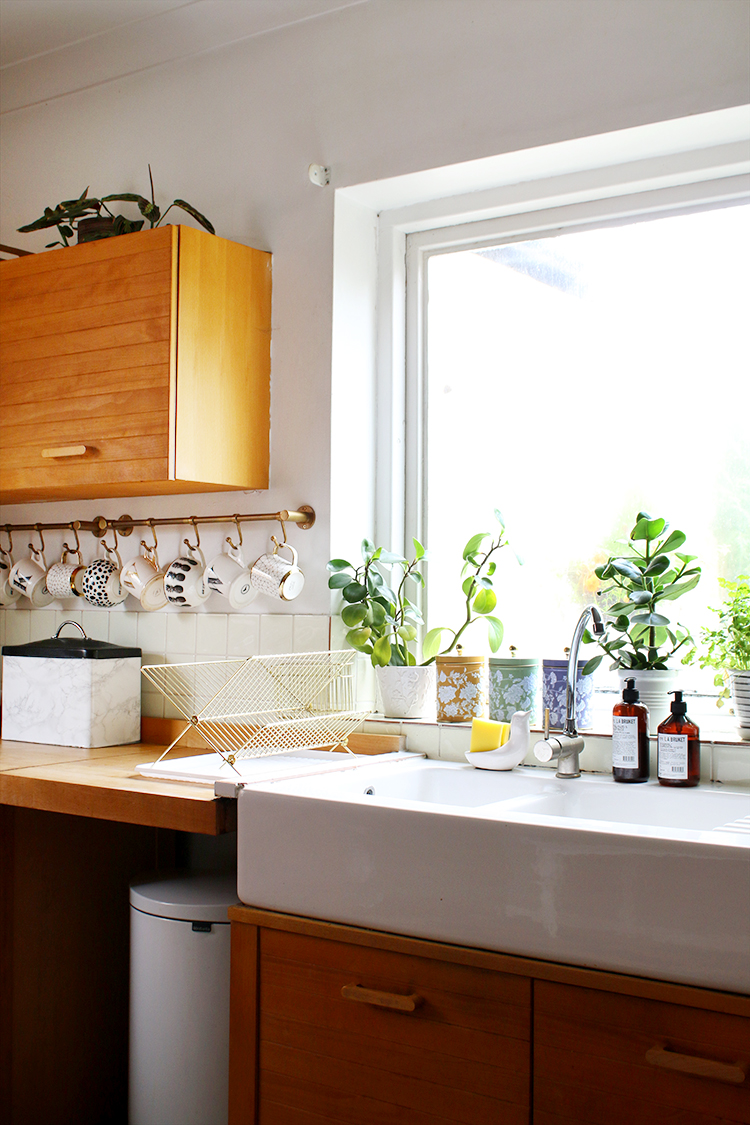 Plants: Aside from additional storage, I also added plenty of plants. There’s just something about lots of greenery that can bring any room – even an ugly one – to life a bit. They are on the windowsills, on the shelving and on top of the upper cupboards. 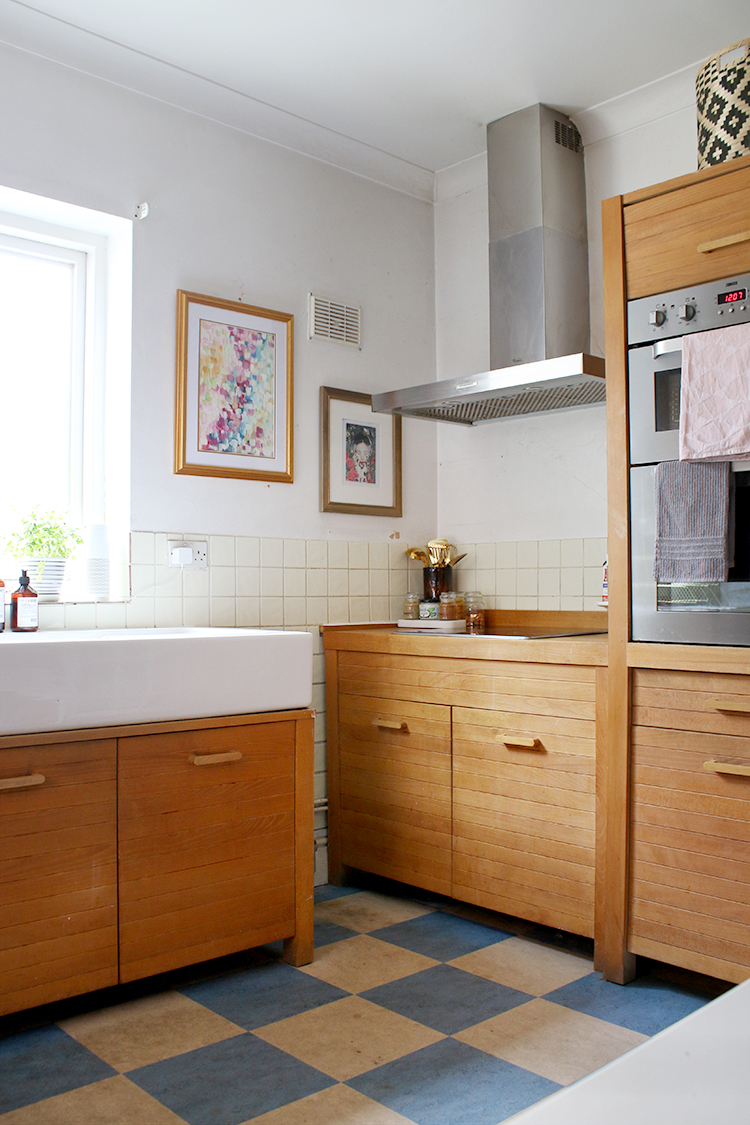 Art: With the walls being in pretty terrible condition, I figured my best bet was to just cover them as much as possible with framed prints, hoping it’ll distract the eye from the fact that it’s in desperate need of painting. The frames add some depth and interest to my ugly kitchen and just make it feel a bit more like me! 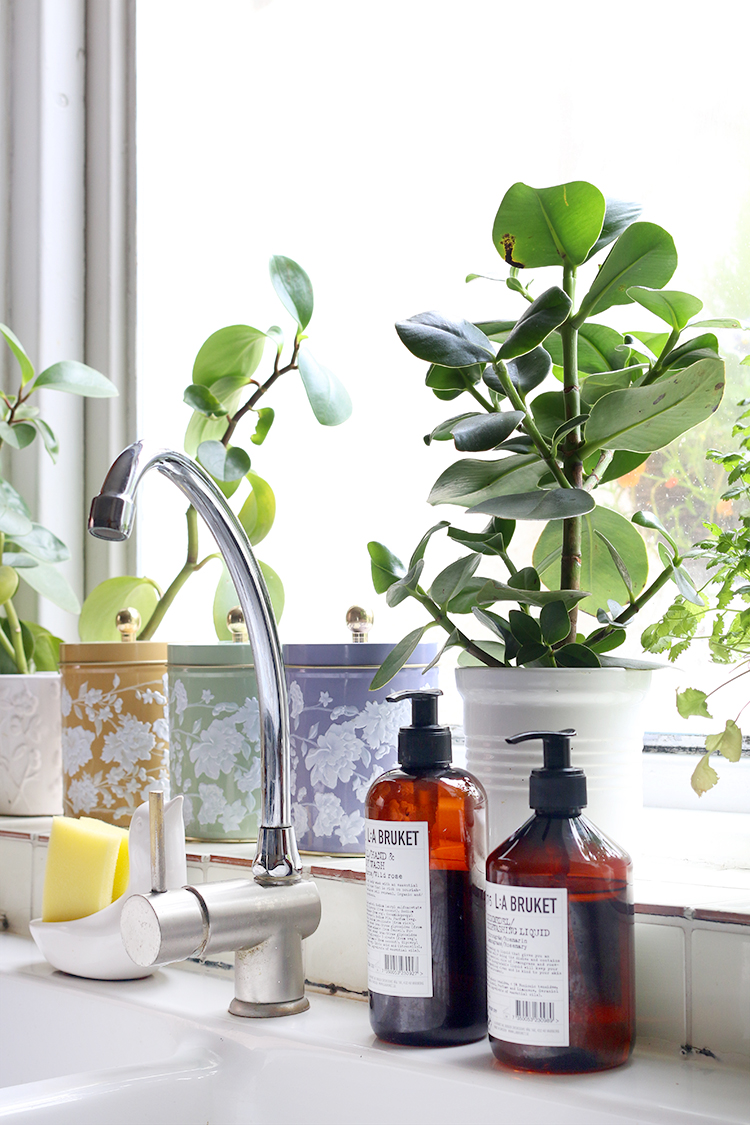 Pretty utility: When your utilitarian items can also be rather pretty, I think you are on to a win-win situation. You’ll notice I don’t have an ugly bottle of Fairy Liquid next to my sink – instead, I have L:A Brucket dish soap and handwash and my pretty gold utensils are in a tortoiseshell glass vase next to the cooker. It may feel a bit like you are rolling shit in glitter but it definitely helps when the kitchen doesn’t look like it’s completely neglected and you’ve just given up on it.

If we were not planning our kitchen renovation so soon (for argument’s sake, let’s say we were going to live with this for a year or so), then there are a few things I’d do to change it on a budget for now. The first thing I’d do is replace the flooring. There are some great inexpensive vinyl flooring products out there right now that would go a long way in brightening up this ugly kitchen! 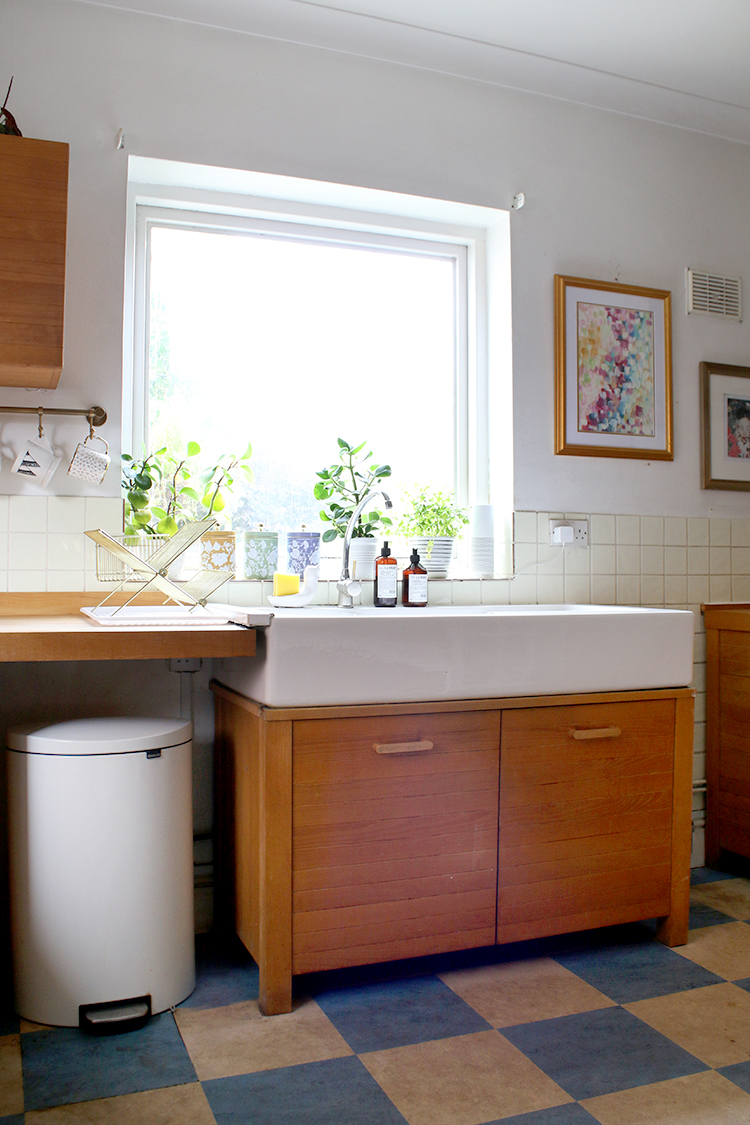 Because the cabinets are wood, I wouldn’t go for a wood-effect flooring in here but perhaps flooring that mimicked the look of slate or marble. Even a vinyl that resembles patterned tiles would bring it up to date and give it a bit of contrast. 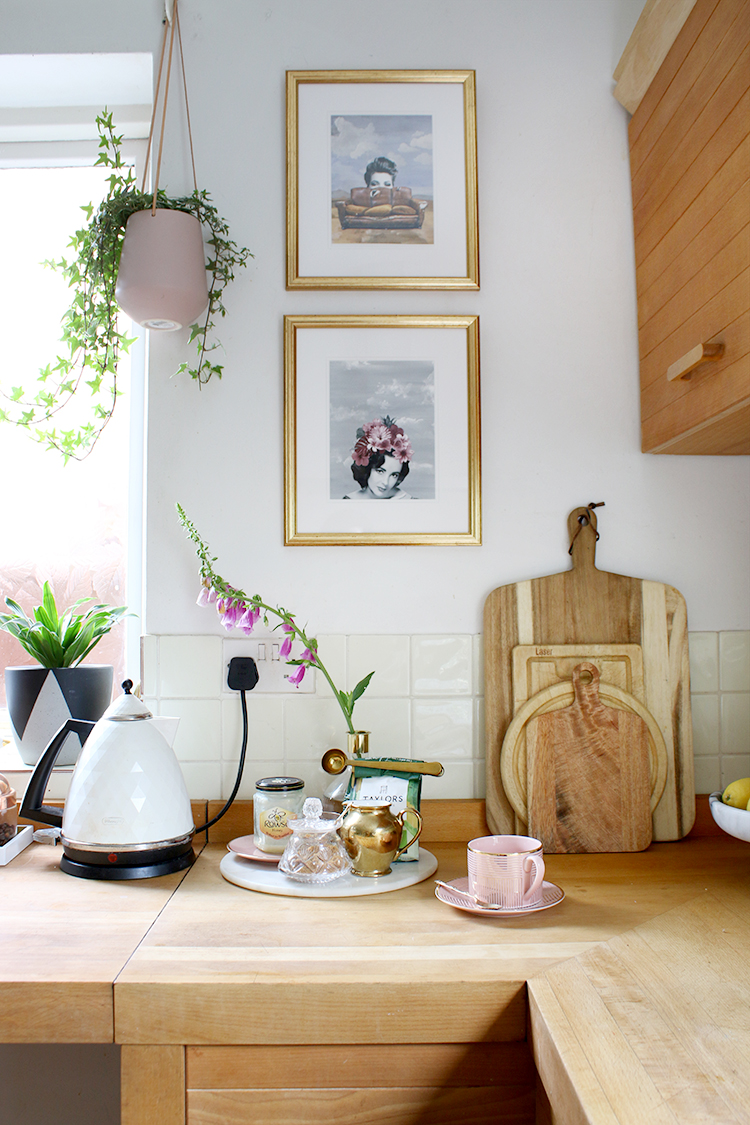 I’d also patch and paint the walls. Because the room doesn’t get a huge amount of light, the current white just looks dirty (trust me, it looks better in the pictures and that’s saying something!) and so I’d probably opt for something in a soft grey or greige colour. 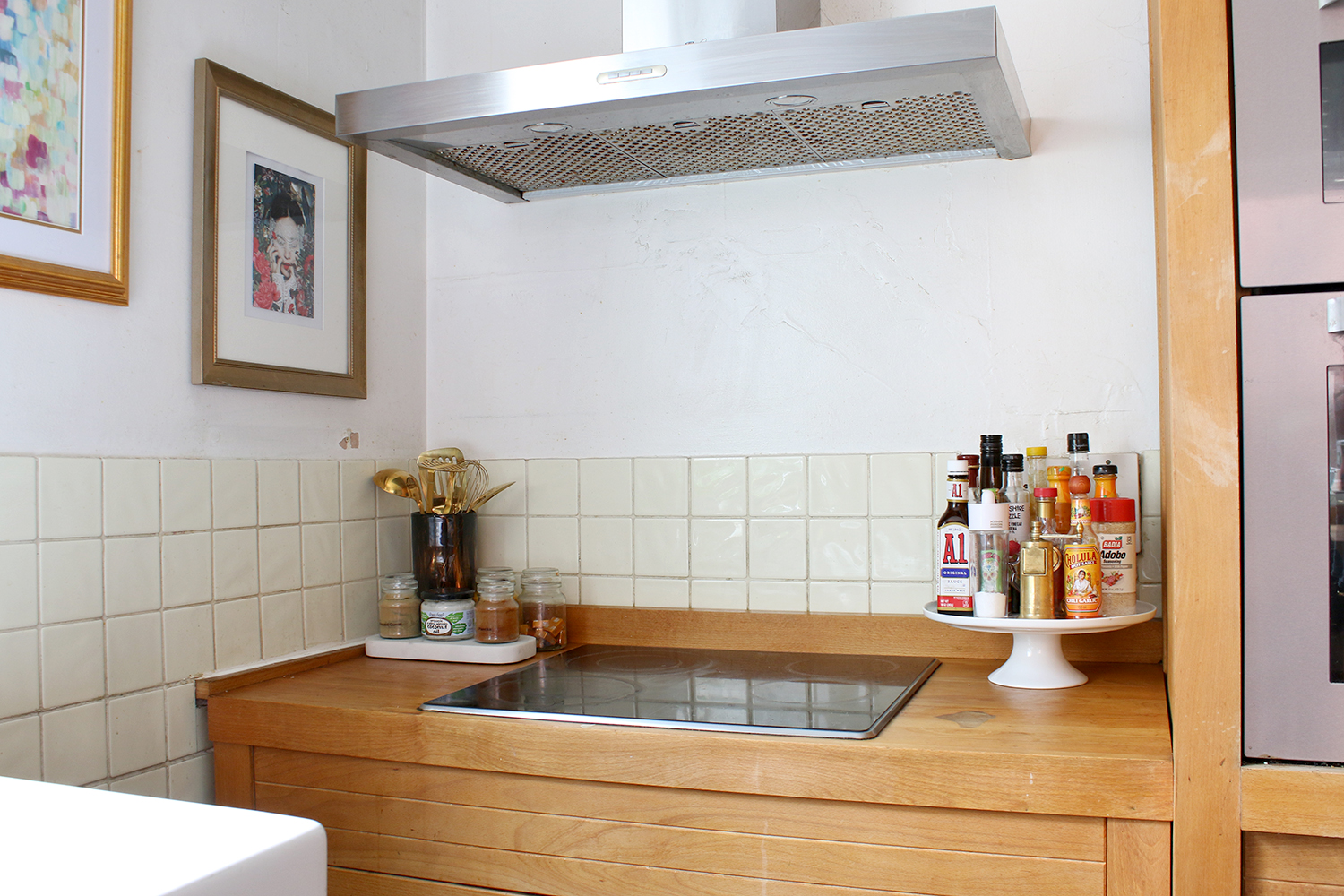 The tiles are pretty ugly as well. I desperately wish they were white rather than a yellow-cream colour but you can get some amazing tile stickers these days that would cover those ugly tiles right up. Another option is to use tile paint. I’d probably just go with white in here to freshen it all up but if I wasn’t going for a patterned floor, then a patterned tile sticker might be fun too.

I’d replace the lighting as well, swapping out those ugly chrome spotlights for something simple in white to blend in with the ceiling!

Those big gaps in the lower cabinets would have to be rectified as well. The most likely solution is that I’d get a dishwasher for at least one of them but on a tiny budget, I’d opt for putting a curtain across the gaps to hide the bin and then hide additional storage behind the other. 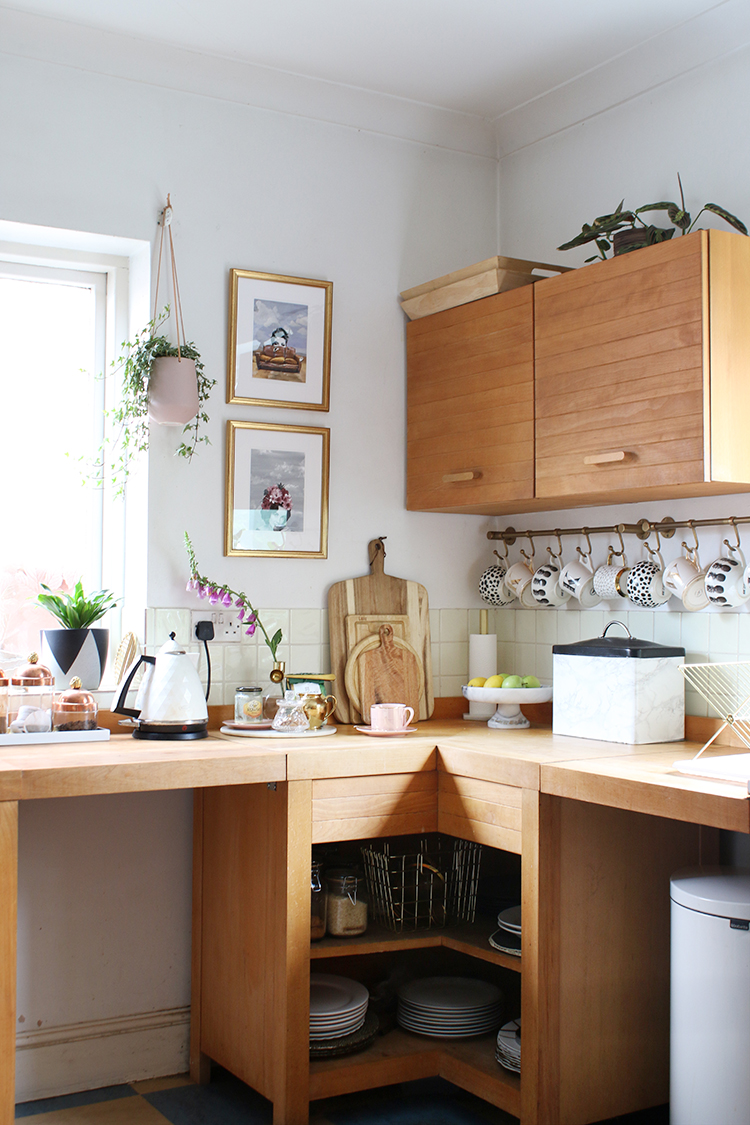 So that’s what I’d do if we weren’t going to be creating a new kitchen in our home. There are a lot of things about this kitchen which I would change (okay, let’s be honest, it’d be ALL of it) but well, for now, it’s just going to have to do and these little changes and additions I’ve made have certainly made it so that I can tolerate it just a little while longer! I am thinking of pulling together a blog post with lots of cute budget decorating ideas for kitchens to give it a revamp for a really low price so stay tuned for that. In the meantime, I’d love to know: Do you have an ugly kitchen or did you have an ugly kitchen you had to live with for a while? What did you do to make it more liveable? The comment box awaits!