How to DIY as a Couple (And Not Kill Each Other)

If there is one thing I hear over and over, it’s that Wayne and I make a good team. And we do in many ways – we have a similar sense of humour, we like the same sort of films and TV, we have a really similar outlook on life and what it means to get the best out of it and we have the same kinds of goal for our future. We also do a lot of stuff on the house together and normally, this is where we hear it the most.

He’s my resident DIYer – he loves nothing more than tackling the hardest parts of updating a room – from plastering to electrics, flooring and tiling, he can pretty much do almost everything I throw at him. And I do demand a lot from him, to be honest. I am the visionary for our home, after all, and so it’s me telling him that we need to update the flooring or skim that wall or swap the light fixture or figure out how to physically create the spaces I dream up. 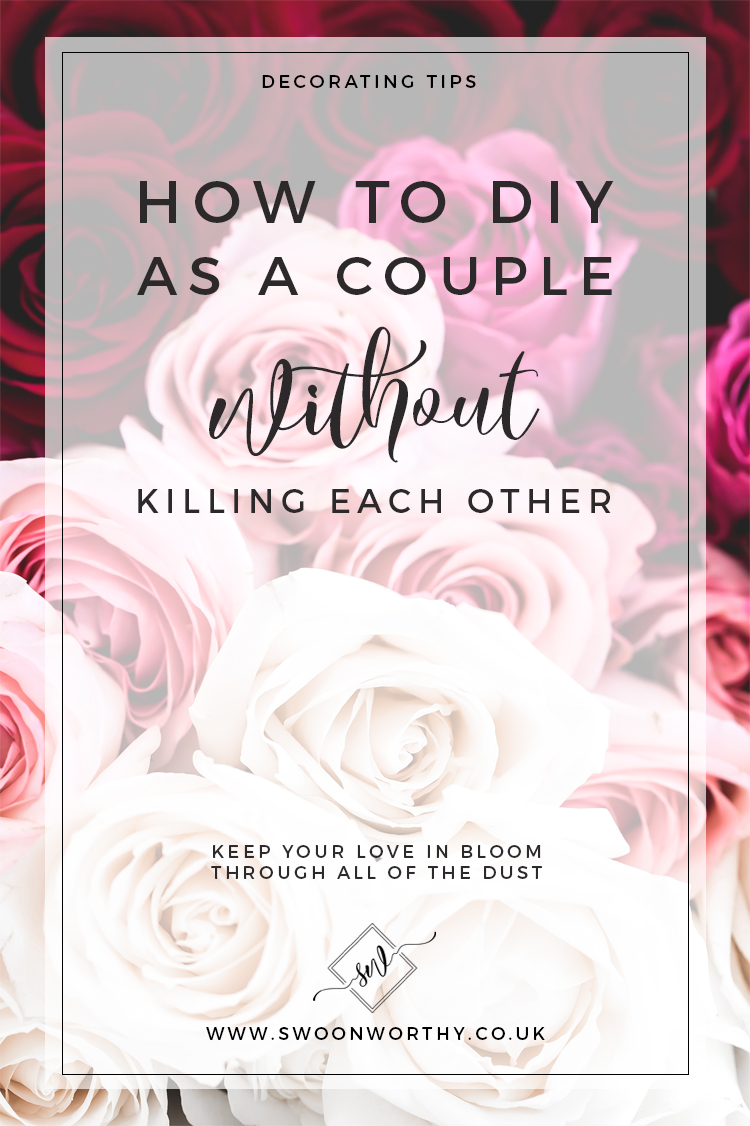 But while it may look like we do all this stuff effortlessly, doing DIY together as a couple isn’t always straight-forward. It tests your patience to the max, it can strain your budget, your time and your attention. And as such, it can be a prime area where arguments take place.

Is it always easy doing DIY as a couple without wanting to kill each other? Of course not. We are human just like everyone else – we get tired, we get hangry, we get impatient with each other just like every other normal couple out there. And yet, doing projects on the house still remains one of our favourite things to do together.

So how do we do it? How can you both do DIY in your home without wanting to kill each other at the end of the day? I figured as we are approaching Valentine’s Day, it was a good time to share how we manage to get stuff done and still stay a team. And as we haven’t done loads on this house just yet, I wanted to share a few pictures from previous projects in our old house that we’ve completed that were definitely a team effort!

Also, I realised as I was gathering images for this post that nearly every single one shows Wayne and not me doing DIY! This is because I’m always the one with the camera!! Definitely need to rectify that in the future.

Play to Each Other’s Strengths 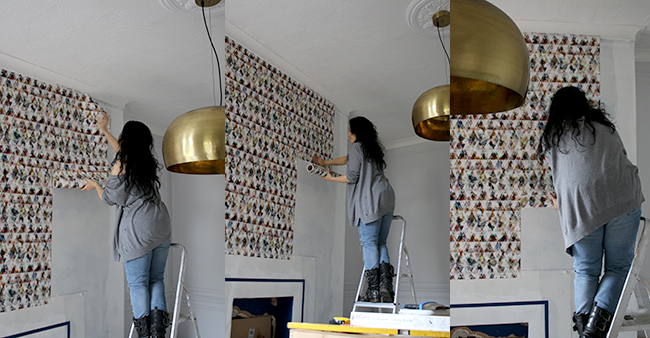 Wayne and I have been together for more than 10 years and in that time, we’ve gotten to know each other incredibly well. So when we’re working on a project together, we tend to play to each other’s strengths and weaknesses. Figure out what each of you does best (and what you simply don’t have the patience or skills to tackle) and assign the elements of the job accordingly.

For instance, I’m better organised so I do most of the planning. So that means I tend to create and organise the timeline of how we’ll tackle a space. I’ll order in and organise the tools and supplies we need as well as making sure the space is clear and prepared for the work to take place. I’m also more patient than he is and I’m more of a perfectionist so I tend to do most of the painting, all the wallpaper hanging and a lot of the finer detail work. 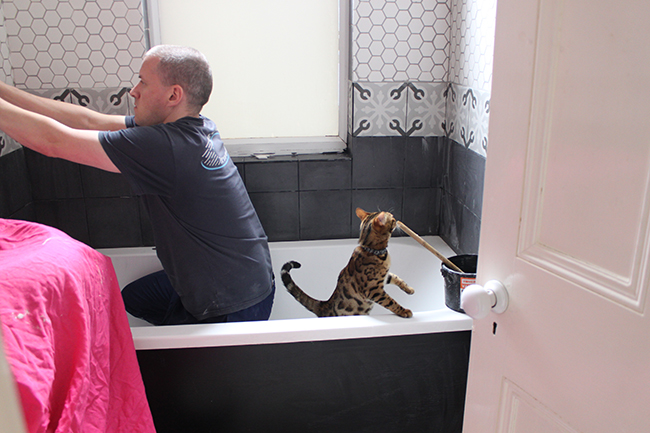 Wayne is physically stronger than me and he’s been doing DIY for many years longer than I have so he normally decides the way he wants to work and how a job is done. I’m normally there as an assistant to the bigger projects – I let him take the lead in terms of the pace of the work and the order in which each task is completed. (Also how cute is that picture from when we were remodelling the bathroom?! I die.)

Make sure you’re on the same page 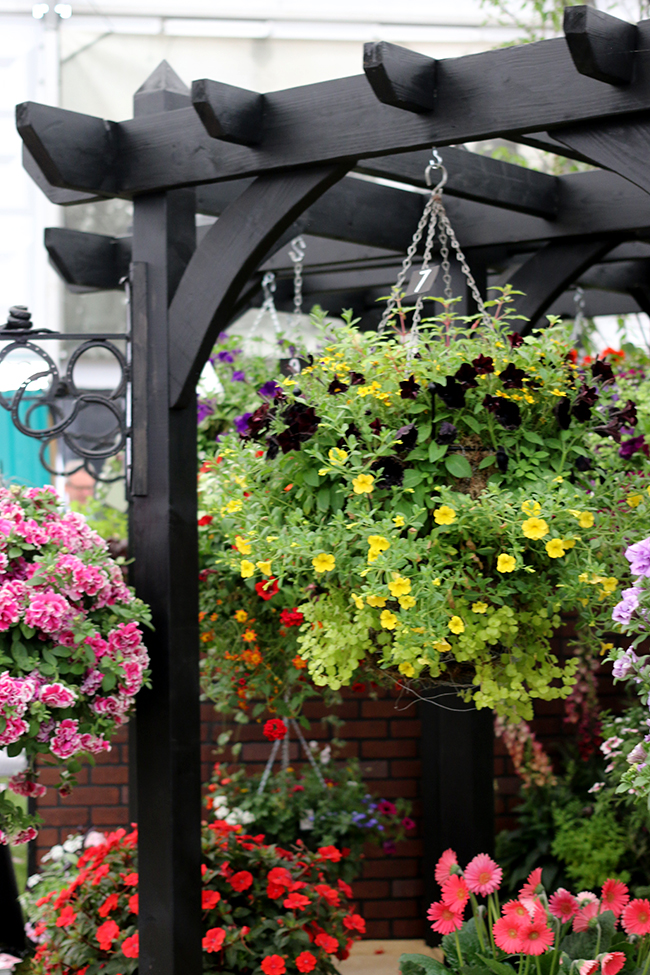 It was Wayne that came up with the idea of putting a pergola in our last garden and then when I went to the Chelsea Flower Show, inspiration struck to paint it black. We both discussed what the final look would be and how we’d use the space. 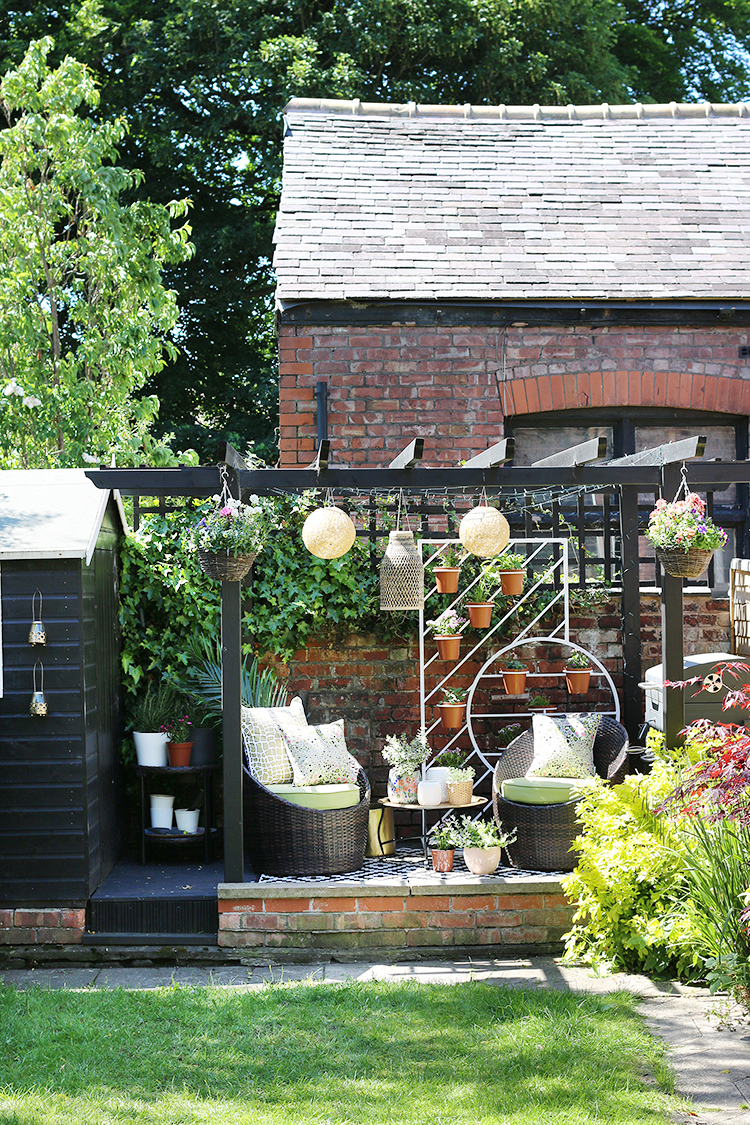 If one of us has a good idea for a project, we’ll take to Pinterest or Google for inspiration so that we can both visualise the final look. There’s a lot of communication before we begin to make sure we’re both on the same page and so that we both know exactly what the finished result is going to look like. This means you are both working to the same goal and can easily see the finish line rather than either of you being in the dark. 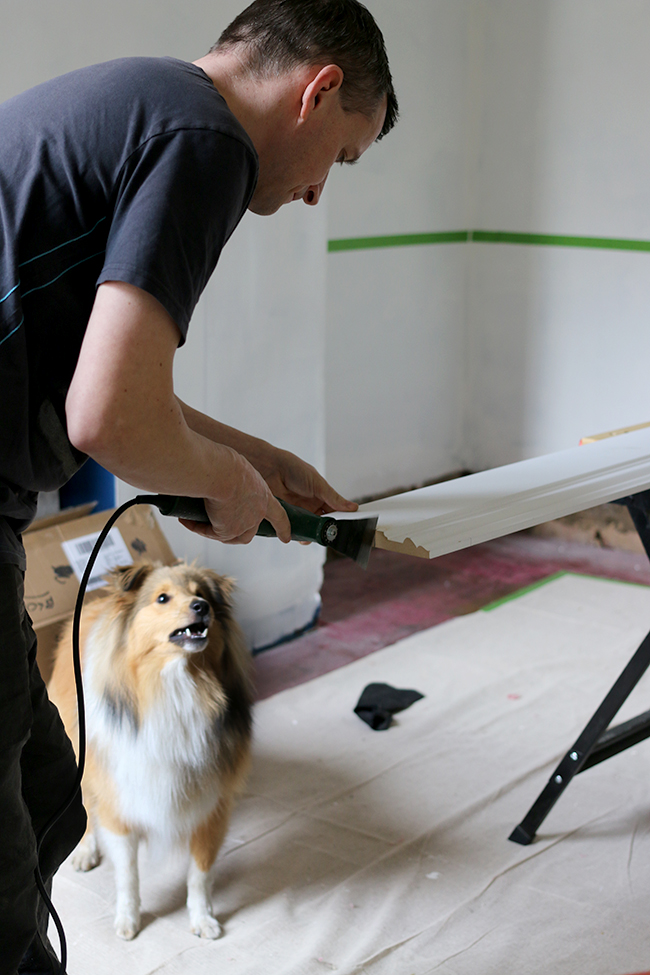 There’s no point in planning a huge job on a Saturday if we have big plans that evening. Rushing a job is one of the best ways to start an argument and everything always takes a bit longer than planned so make sure you’ve discussed when you’ll both be available to give a project the time and attention it deserves. For us, this generally means doing work on weekends or evenings and planning around things like visitors or holidays – or even things like some important Manchester United match on the television (eye-rolling emoji right there – ha!). 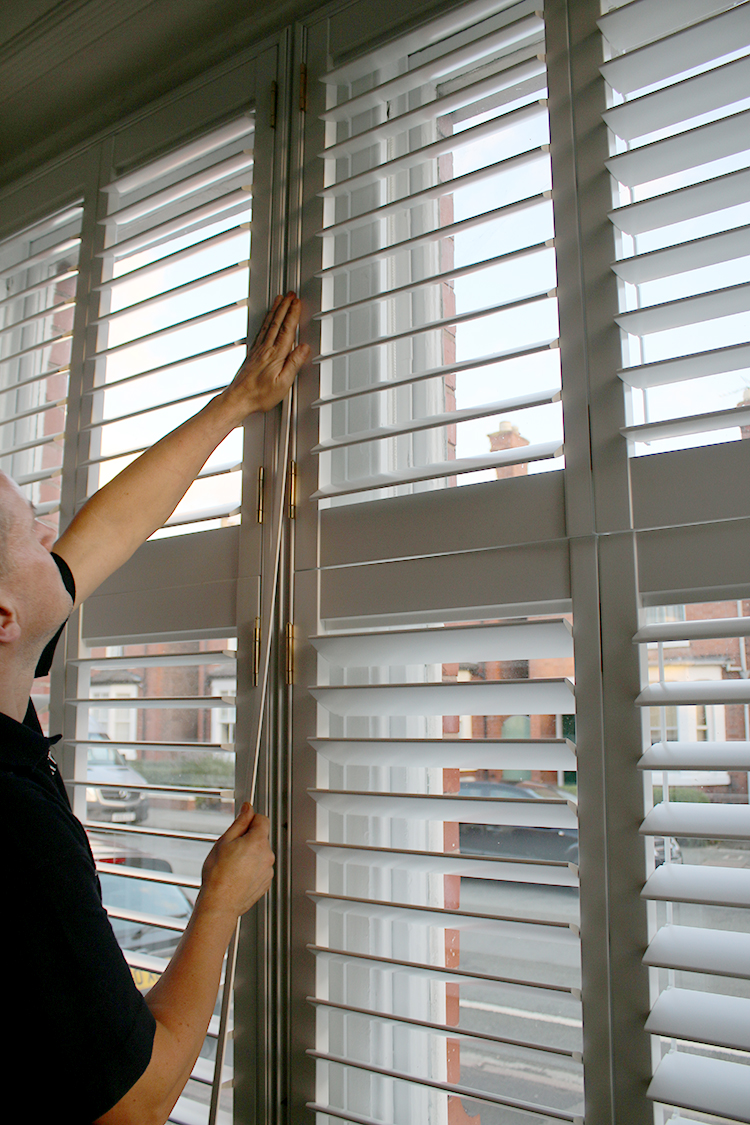 From watching YouTube videos together to reading up on what materials are required, we go into the project armed with a good idea of how the work will play out. Even if Wayne has a very clear idea of how something will need to be done, I also want to be completely clear on how a DIY project is completed. It helps me in terms of assisting him and it also gives me a good idea of how long each element is going to take.

We also discuss budgets beforehand so we know how much something is going to cost before committing to a project.

View All Opinions as Valid 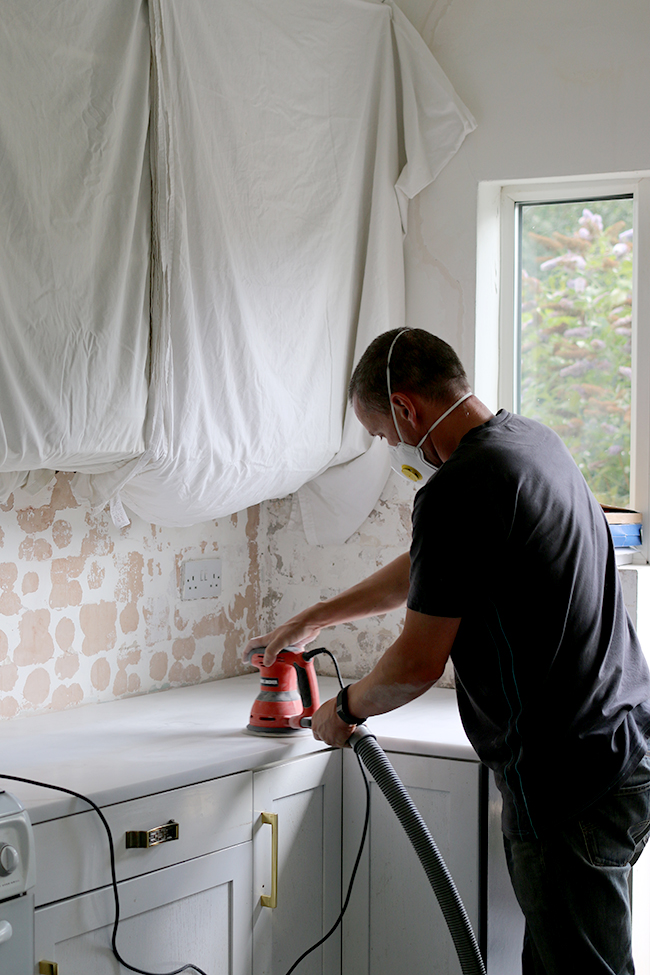 While I come up with the concepts and mood boards, he does have an opinion and has the right to a veto when it comes to larger investments in our home. 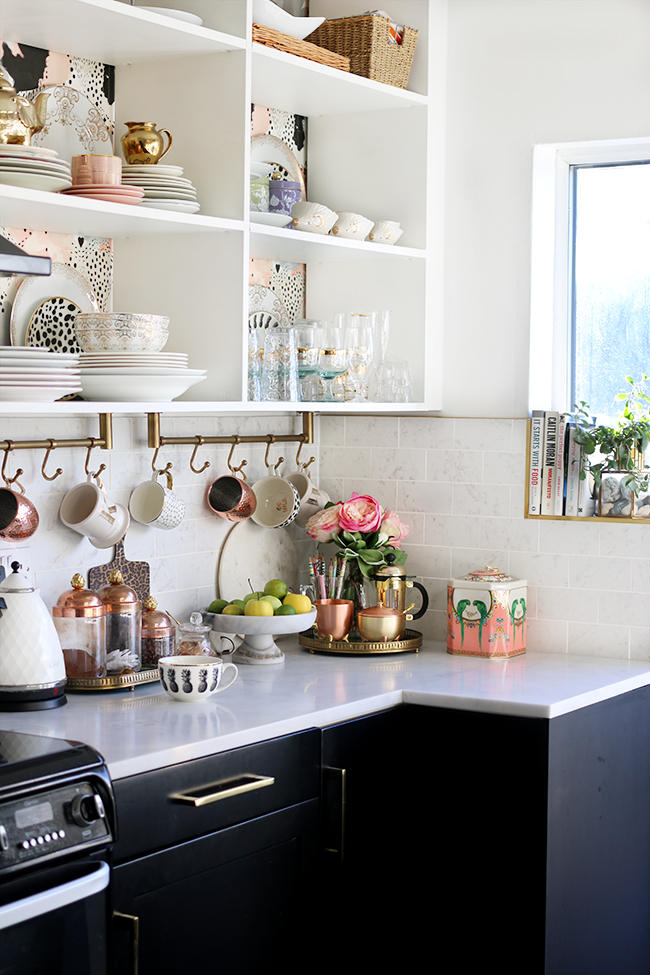 We both live here, after all, and I want our home to reflect both of our tastes. So we discuss what we’ll be doing in the house beforehand, chat through what we feel is the best way to tackle a project and what our best cost-effective ideas are.

Be supportive when something goes wrong 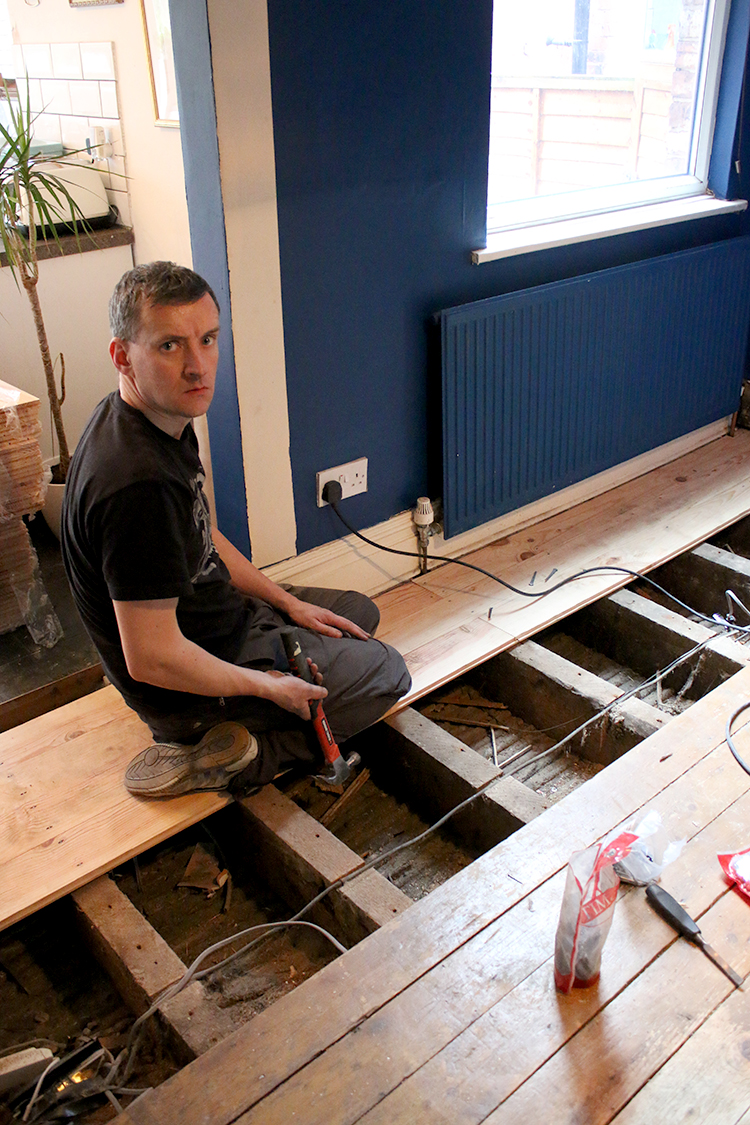 I found that picture in my files and I had to laugh! Wayne looks WELL pissed off at me so I’m wondering if I told him to smile for the camera when he was deep in the midst of laying flooring? *evil laughter*

Things don’t always go to plan, that’s just the way it goes so be prepared for the inevitable. When it does, there’s no point on turning on each other. Take a breath, resist the urge to fly off the handle at each other and instead look for ways to move forward. Problem-solve as a team – a problem shared is a problem halved! 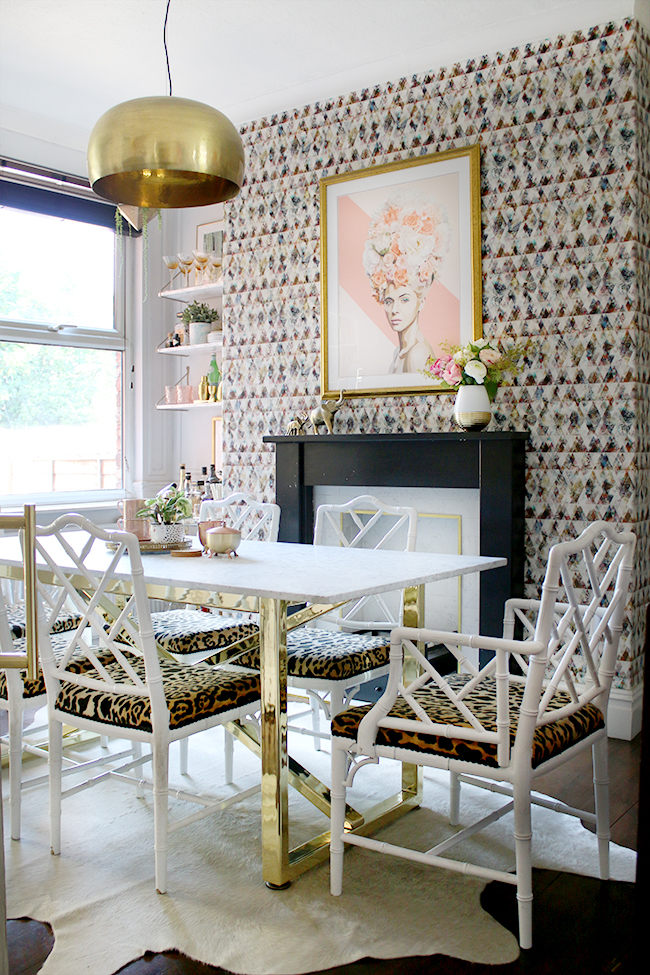 There’s so much satisfaction when a job is finished so take the time to celebrate together. Stand back, tell each other how proud you are of each other. If you think your partner has done a great job, tell them so. It’s so easy to take each other for granted and come to expect their skills and experience in making your home a better place. By sharing your appreciation, it’ll be a continuous reminder that you are a team and that you are appreciative of what they bring to the table. It’s also just a nice thing to do.

So those are just some of the ways that we stay sane during DIY projects together. Do you do DIY as a couple? If so, what do you both do to keep tempers in check? If not, is there a reason why? I’d love to hear your own experiences so please do share in the comments!