The REVEAL of My Back Garden Patio Makeover!

It’s the patio reveal day!! These are my VERY FAVOURITE POSTS TO DO. Honestly, I wish I could do them every week but alas, I would need a much bigger house and a heck of a lot more money. But today the little spot in the back of our garden is ready for it’s big debut. Are you ready? 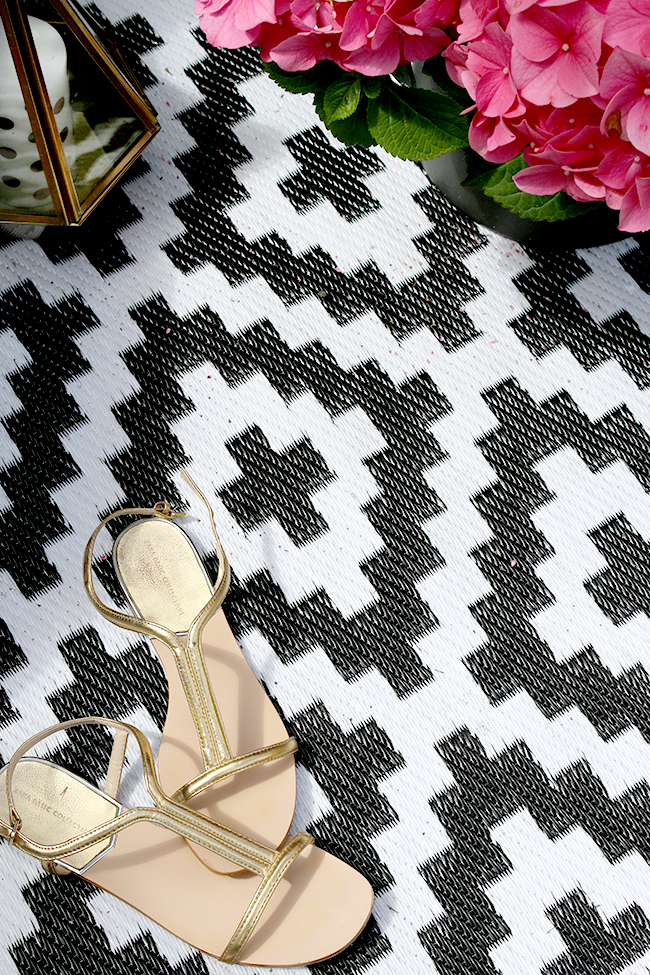 Of course you are but we’re not going to just jump right in. Consider that the appetiser. I know I know I’m cruel and don’t think I don’t know that you’re just going to scroll down because of course you will (because I would too). But I really think it’s worth talking about what we started with and why we did all this first.

*This post contains a few affiliate links which are indicated by an asterisk (*). If you click on the link, you don’t pay any more but I may earn a few extra pennies for pretties for the garden. Win-win! You can see my affiliate disclosure in the sidebar for more information.

Long long ago when we first moved in, this little patch at the back of our garden was a horrible mess. This was taken in June 2011 so a year after we’d moved in. We’d replaced the fencing on one of the borders but there was just nothing but a lot of overgrown bushes and dead leaves back there. No man’s land. 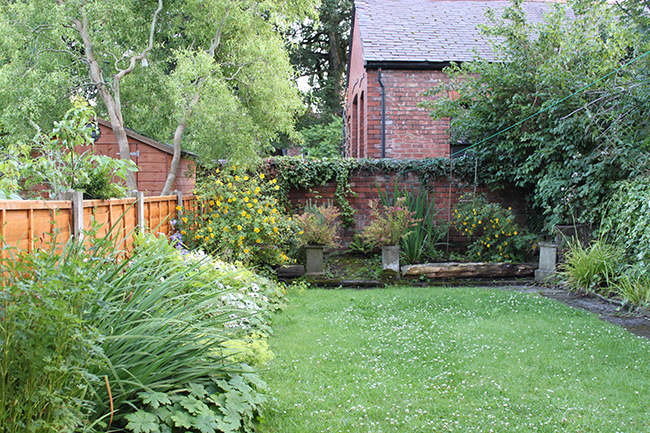 While I will concede that there’s a bit of charm in an overgrown garden at the height of summer as above, absolutely everything would die back in the dead of winter and we would end up with a garden that looked like this. Wow. Yeah. (This was taken before those fence panels to the left were replaced!) 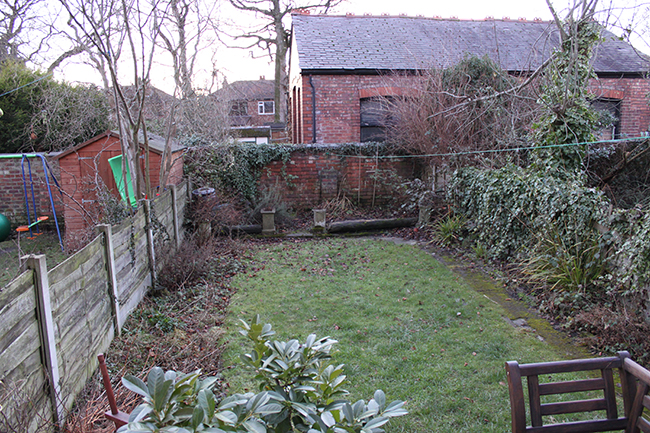 The following summer, we decided to do some major clearing and created a teeny tiny little patio with a teeny tiny little shed. This actually is one of my most popular pins on Pinterest. Crazy. But it was really cute, I admit. We also did a lot of planting along the borders to create some year round greenery. 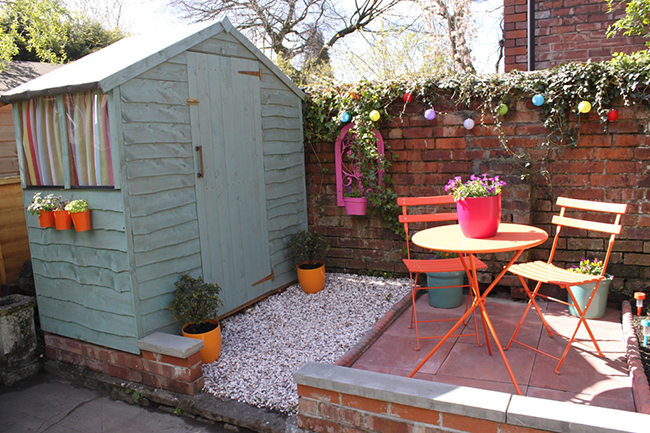 And then last year, we decided our teeny tiny shed just wasn’t big enough so we put a bigger one in and I decided to make it a bit more of a grown up space. I admit however, that because of the size of the patio and because it’s quite overlooked by our neighbours, we rarely used it. We live on a typical Edwardian/Victorian style street where the houses are quite close together. While we had planted some larger bushes when we first moved in that had grown to provide a good privacy screen over on the left side, the right side still had low fencing and our plants hadn’t yet matured enough to provide cover on the right. So yeah, it looked fine but it wasn’t an ideal place to hang out. 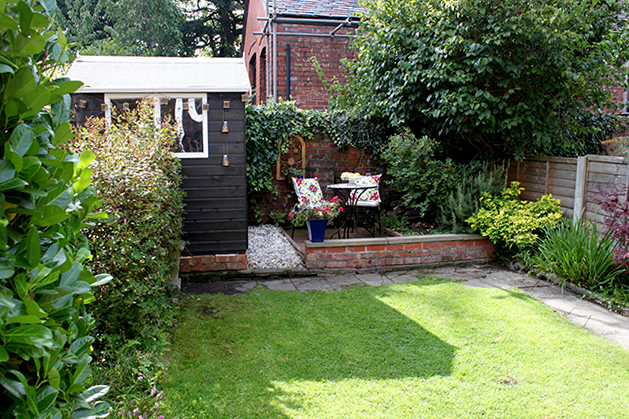 That brings us to this year when our neighbours were working on their back garden, removed part of a tree which then fell on another tree and into our back garden. Whoops. What happened sadly was that those lovely big trees had to be removed (which gracefully blocked a large part of the view of that f*&$”£! scaffolding which has been there for 2 1/2 years) and we were left with a really open and very overlooked patio. It was pretty bad. You read about that here. 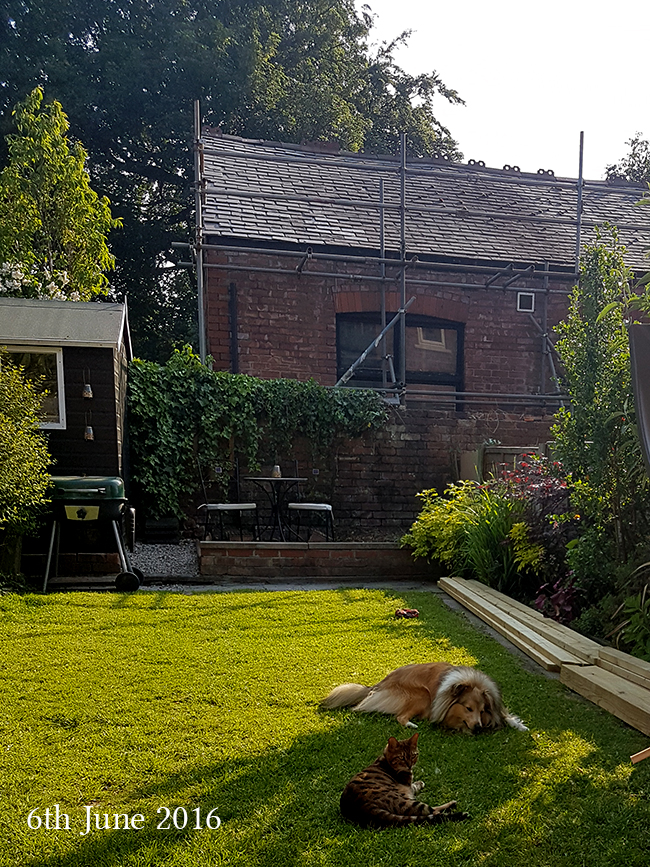 So we decided to take action. Wayne erected a pergola, replaced the short fence panels with nice tall ones and I painted and decorated! So here we are today. 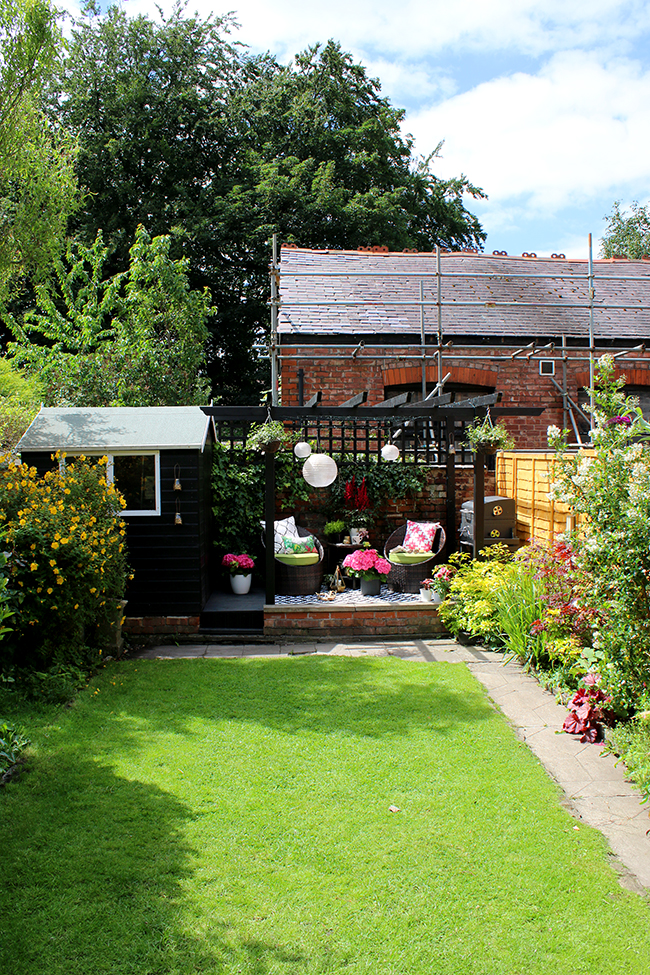 First, I have to say the garden finally – after 6 years!! – feels like a private oasis full of lush greenery. I can go into the space without feeling like my neighbours in their gardens can see everything I’m doing. We have really nice neighbours (thankfully) but the back of the garden always felt a bit like a communal space because everyone was able to see straight into everyone else’s yard due to that low fencing and I was so happy our neighbours on the left agreed they liked the idea of bigger panels too! I mean, it’s nice to chat and everything, don’t get me wrong, but we just wanted to feel the space was our own, ya know? 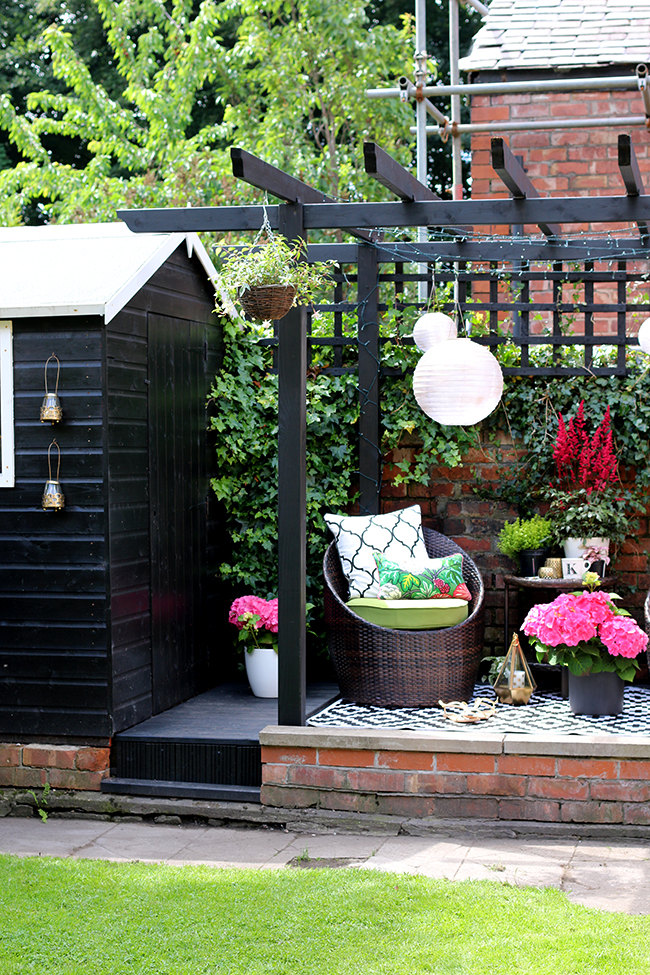 And with the addition of the pergola, when you are sat on that little patio, it truly feels private because you have something over your head! You can’t see into anyone else’s garden and you can only see the very top windows of the houses on either side. In terms of being overlooked on a street with lots of houses crammed next to each other, it’s pretty awesome. 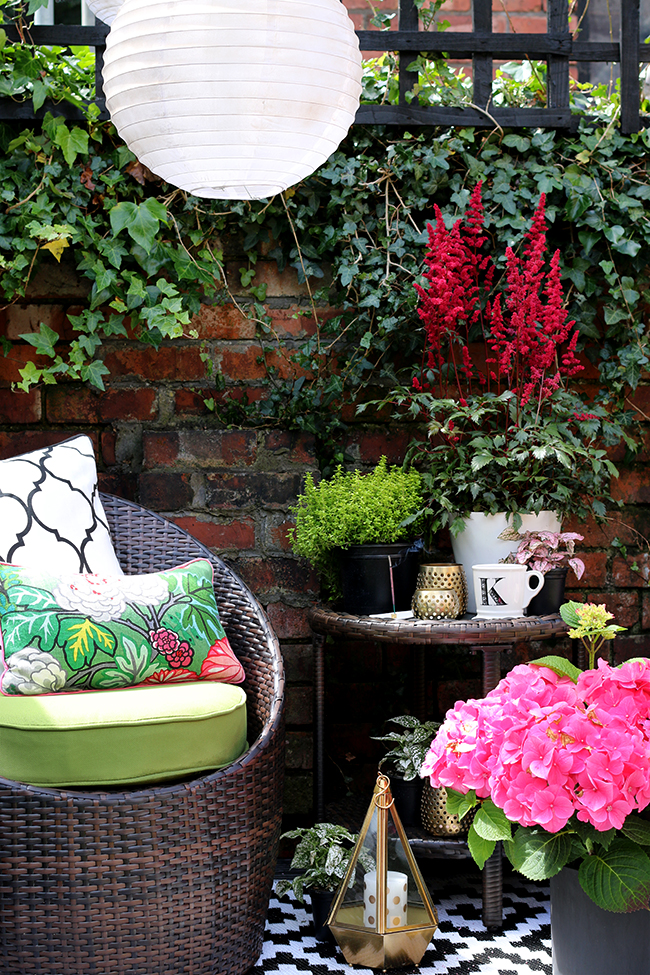 Now let’s talk about some of the design elements! I painted the entire thing black because I wanted it to feel like it was connected in some way with the shed. Plus, I am seriously digging black in garden design right now (in fact, I did a post over on Oak Furnitureland’s blog recently all about it) and we are going to be painting the decking directly in front of the house in the same colour. 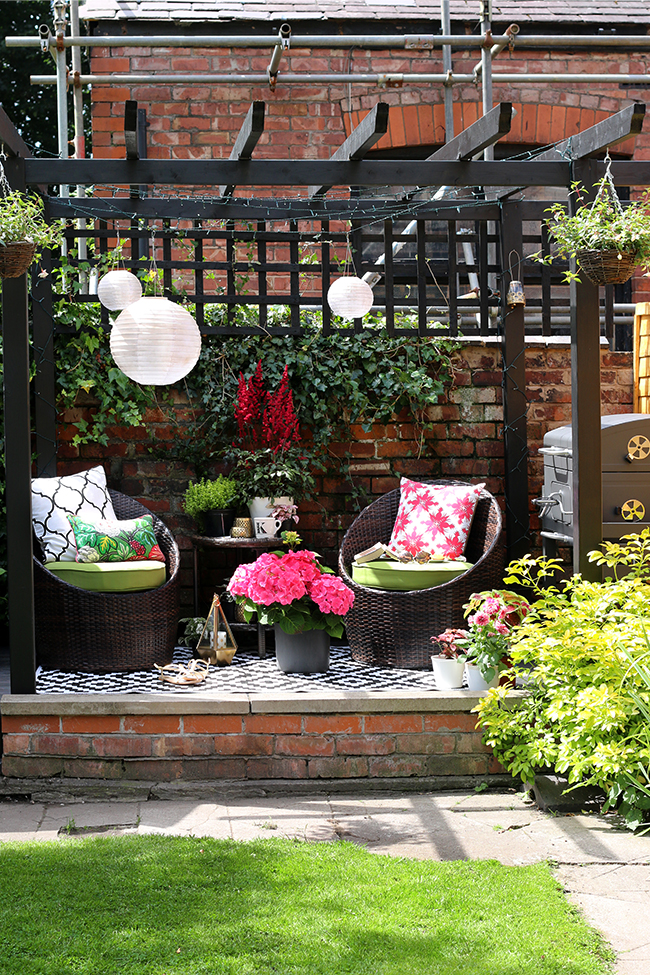 I decided to stick to a more neutral colour scheme of black, white and green and then just added punches of pink in the plants and flowers and tied those in with some throw cushions. This way, I can change the colour scheme in the future without having to buy lots of new things – just new plants ;) The cushions from left to right are from Elce Stockholm, Stuck on Hue and Bianca Hall in case you were wondering. 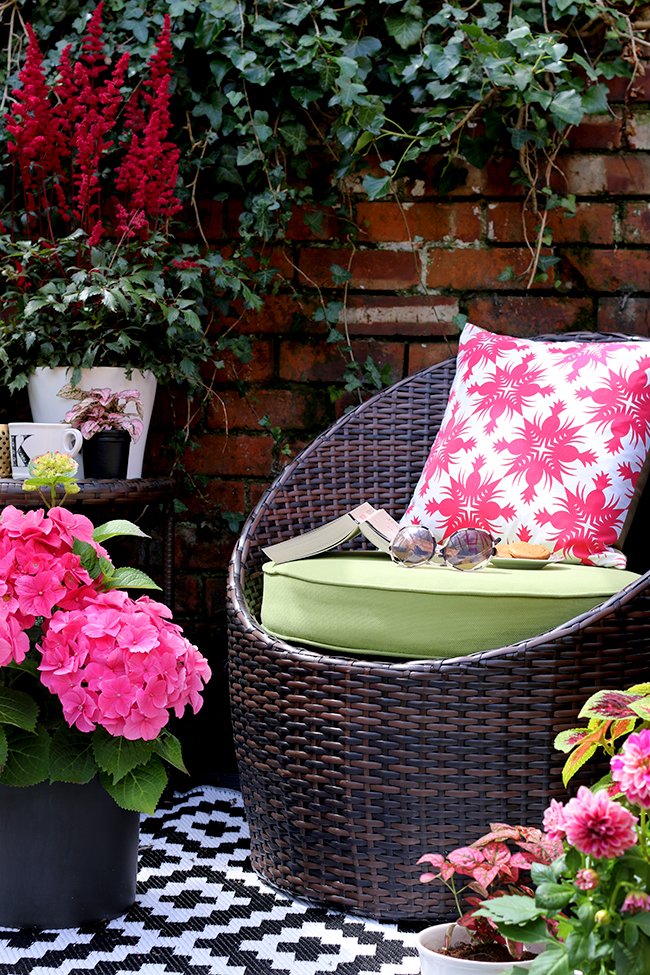 I looked long and hard for a new seating set for the space. We certainly have more space back there now which was fantastic but it wasn’t large enough for a sofa set or anything like that which I would have loved. And garden furniture is EXPENSIVE – holy crap. It’s really expensive. So for the sake of a tiny budget (I’m doing up my kitchen, remember?) and because I really wanted a set that we could settle down into, I decided on this little round set from George at Asda (!!). I have to admit, I kind of love it. The quality is great and for less than £130 we have some really comfy seating with nice thick cushions. 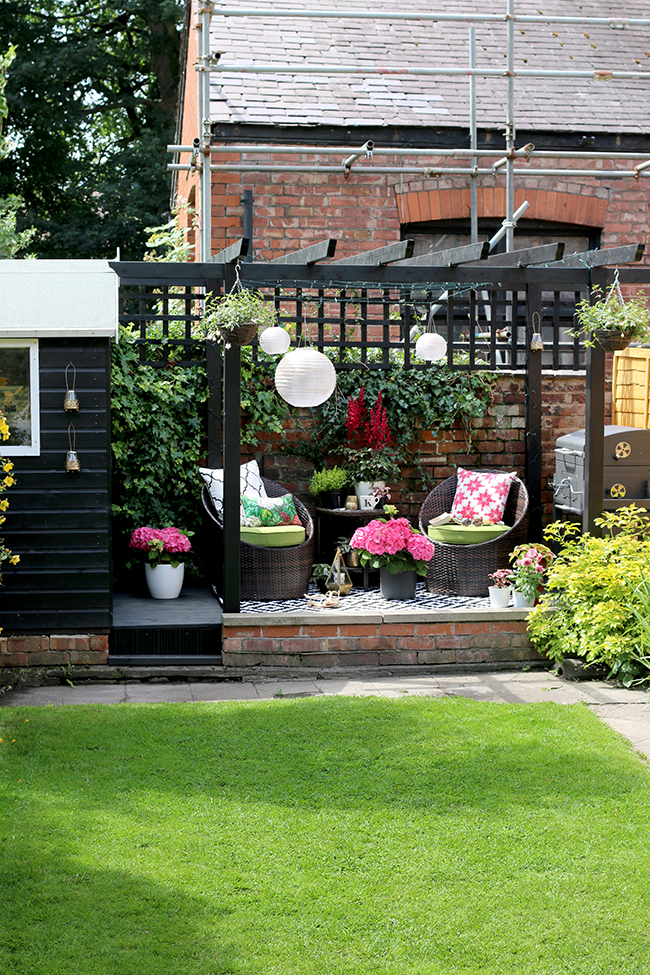 I also filled the space with lots of plants – something that I always wanted to do to add back in some of the greenery we lost with the removal of the large trees that used to overhang this space. Thankfully, we have some fantastic ivy that we want to train to cover the top of the pergola in time and we’re looking at also getting some climbers as well. 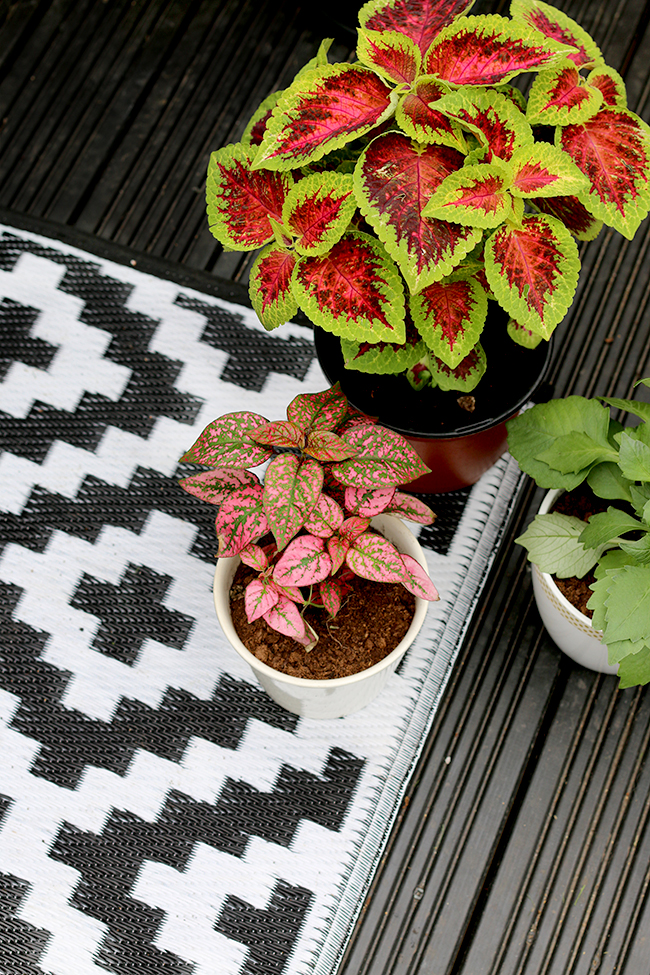 I added the graphic black and white outdoor rug* to give the whole space a bit more impact. I ended up buying two more rugs for the decking in front of the house to tie it all together as well as a patio umbrella in the same green colour but there’s still some work to do there so I’ll have to share that at a later time!

And lastly, I wrapped little solar fairy lights around the entire thing and added a few hanging Chinese lanterns* so at night, this spot is lit up like a Christmas tree and I LOVE IT. 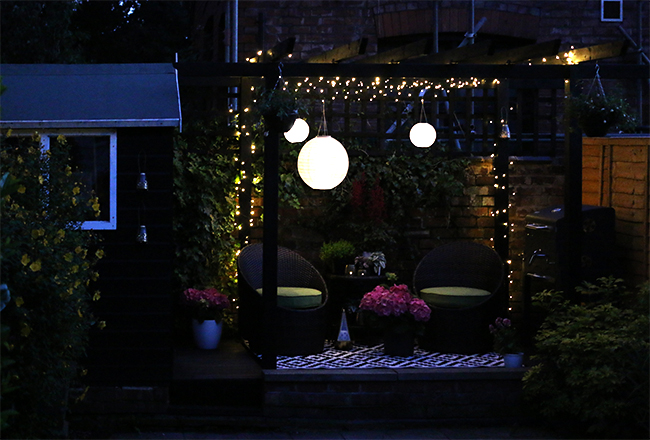 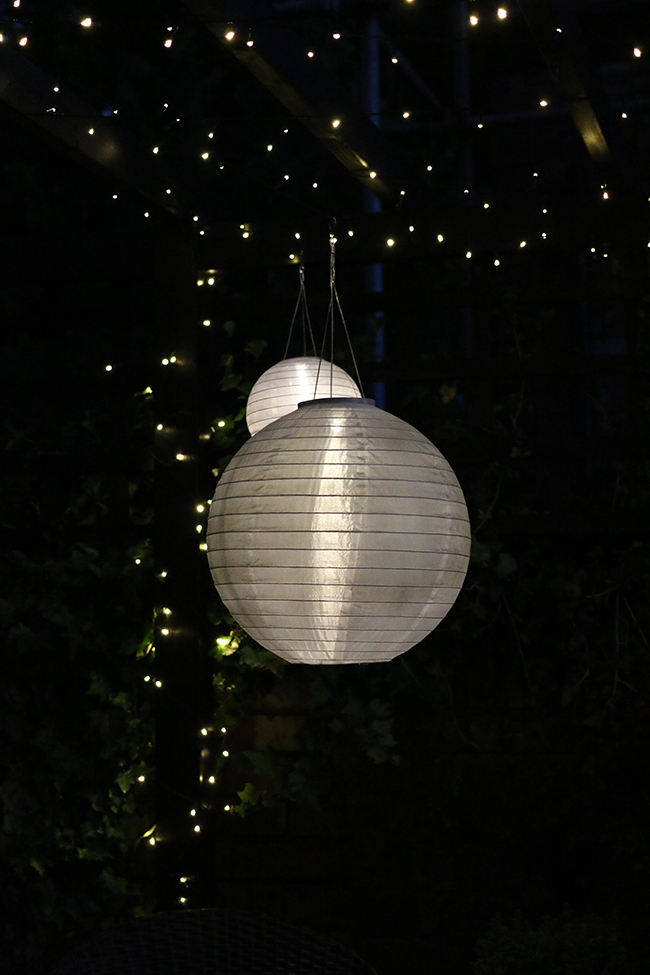 I have to say that it’s taken us 6 years to get to this point with our garden and despite that horrible scaffolding that we can do nothing about, it’s probably the best the garden has ever looked. Our ‘Garden on a Roll’ which we put in 3 years ago is finally properly maturing now and is still going strong, we have nice coverage on the other side too thanks to the Laurel that Wayne planted nearly 5 years ago. 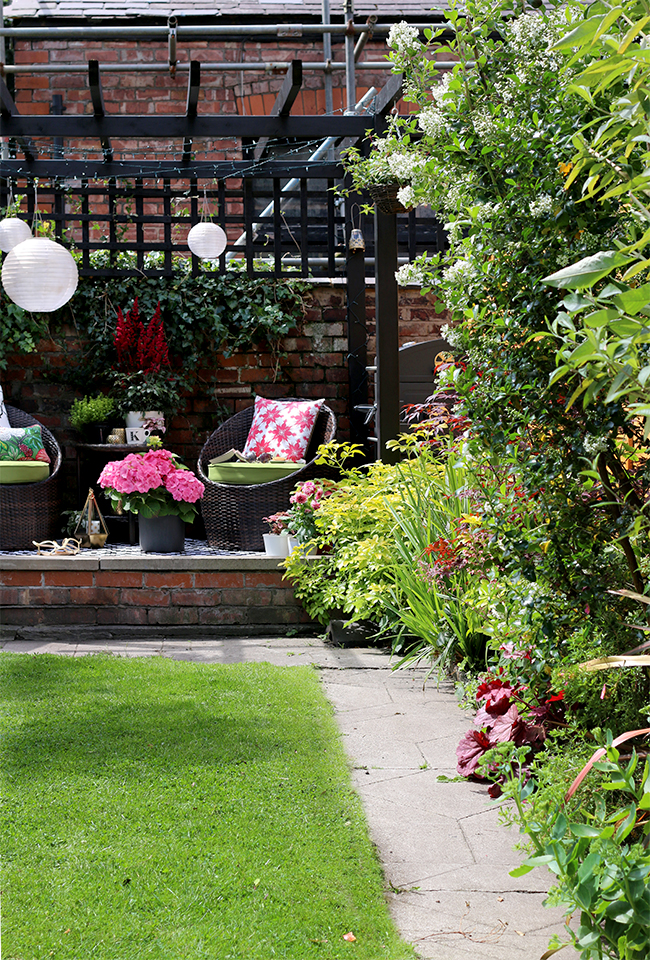 The lawn had been destroyed when Quito was a puppy (he loved to dig and to pull tufts of grass out of the garden with his mouth – in fact, he still likes doing this but he’s finally starting to understand that the humans don’t like when he does it!). Wayne planted grass seed and has nurtured it back to life this year and while it’s not 100%, it’s probably at about 95% back to what it used to be – nice and lush and green. 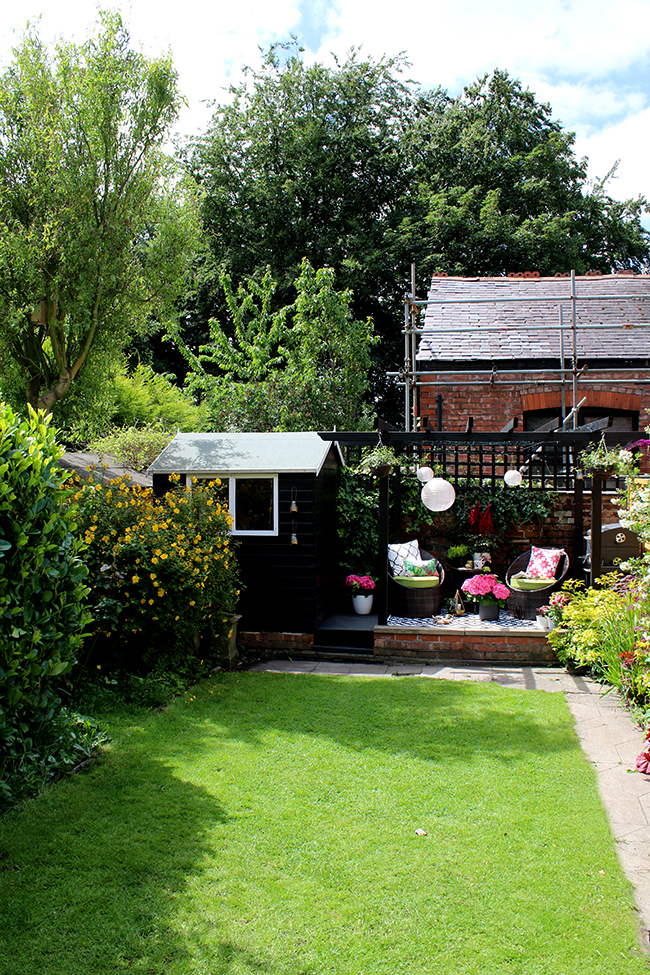 The biggest impact in terms of privacy has been the higher fencing – something that’s hard to put across in photographs I admit because you’d really have to stand in the space to understand how little we used to have in this spot. But it truly feels like it’s our own little oasis now and our new pergola and patio have given us the freedom to enjoy the whole of our garden now, not just parts of it. 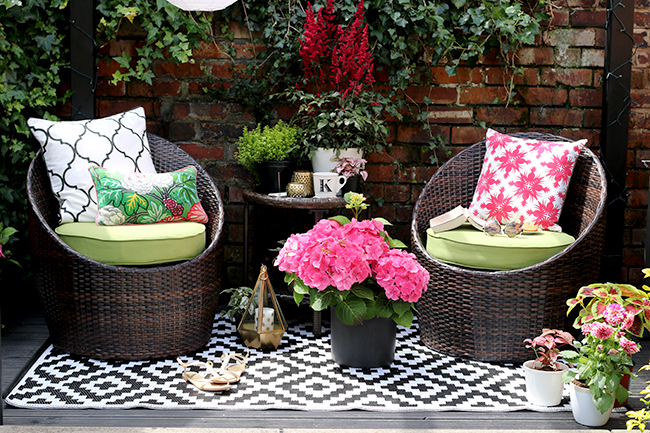 We’ve already spent lots of time in this spot and as this week is supposed to be a scorcher, I have no doubt if you’re looking for us, we’ll be in this little spot at the back of the garden enjoying a cold drink or two.

So that’s the reveal for today! I’d love to hear what you think of our new little patio? Do you suffer with privacy issues in your garden as well and if so, what have you done to cope with it?