Now if you haven’t read my previous post about investing in trends and how trends actually work, then I would implore you to go read that post first. Why? Because the whole idea that one trend is IN and one trend is OUT is actually ludicrous as trends just don’t work that way. There is no date at which something officially becomes old-fashioned so you’ll still see lots and lots of the trends from this year still going strong in the next. In fact, I resisted the urge to do a big trend post because I keep seeing things like, ‘Velvet is going to be huge in 2019!” and I’m like, Hang on… isn’t that already a big trend? and wasn’t it on 14 other lists in 2017 as a ‘big trend’ too? So yeah, it all gets a bit hard to keep track of as things just overlap from one year to the next. 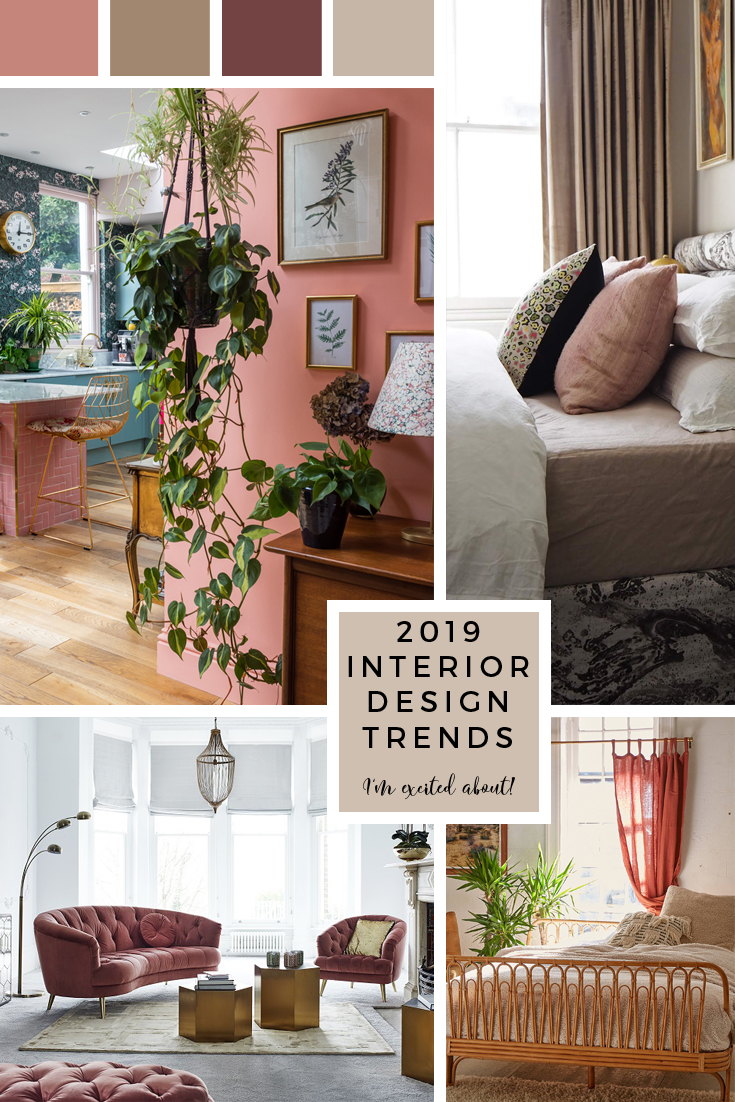 However, I thought I’d just highlight a few things that weren’t necessarily huge mainstream trends over this past year and ones I’m actually pretty excited about, simply because they feel a bit different and fresh to me. Remember the bell curve in the last post? Well, I’ll let you know where I see them falling as I go through them now… (see, that’s why you need to read that one first. Go on. Do it now. I’ll wait.) 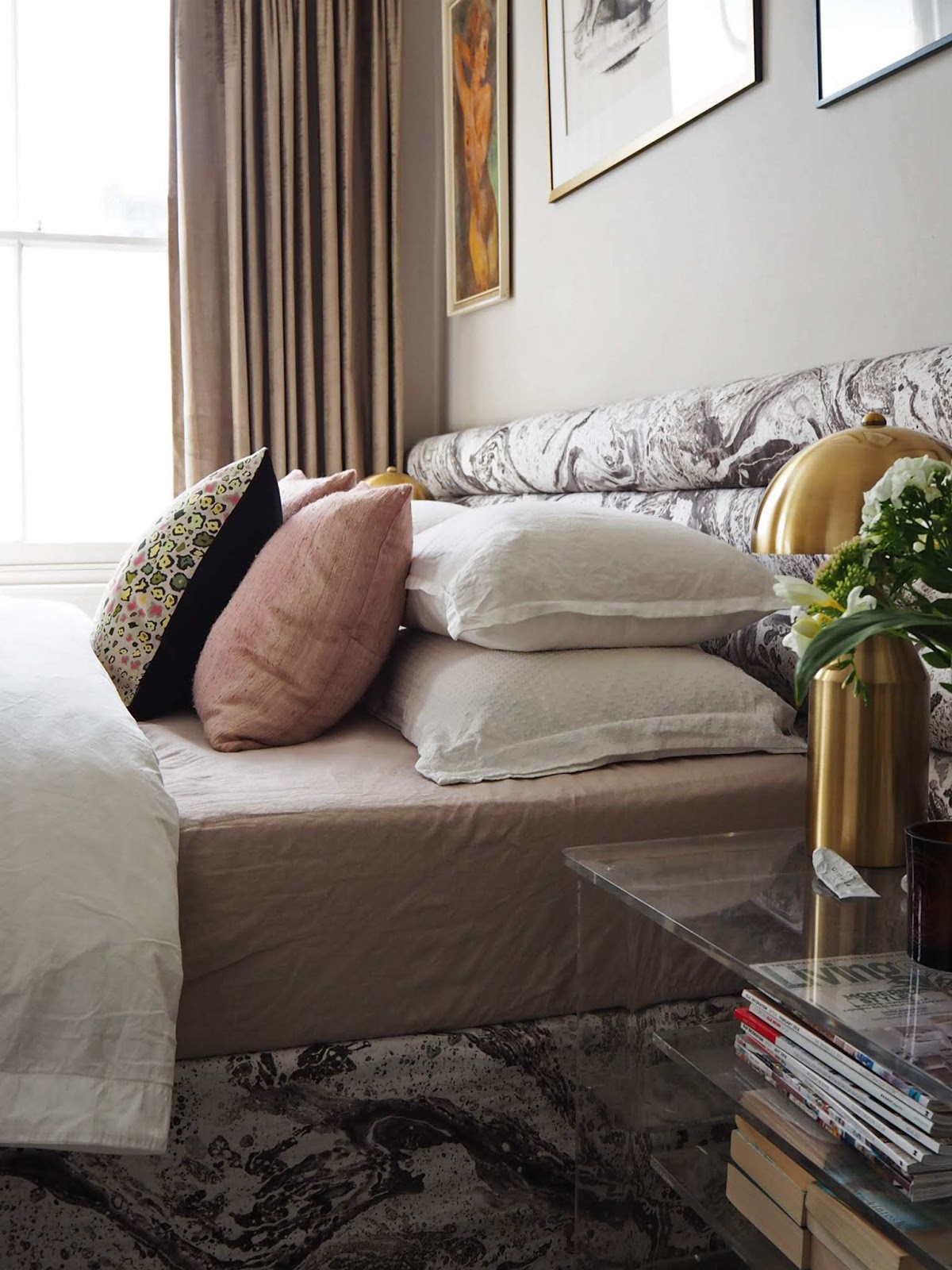 We’re hearing a lot about grey being ‘out’ which, for all intents and purposes, really isn’t ‘out’ at all… Okay, so its bell curve has been HUGE AND LONG and so it’s likely just at the stages of ‘late majority’ in the curve now that everyone and their mother has a grey lounge. But I promise, you don’t have to repaint or get rid of that beautiful grey sofa you have so there’s no need for panic here – grey still has a place. However, there is another neutral that’s sneaking up at the moment which I’d say is at the ‘early adopter’ stage right now. And yes, that’s beige. Now, we aren’t talking magnolia here. We are talking about beiges that are just a bit less yellow than that – warmer, greyer beiges with just a hint more softness. 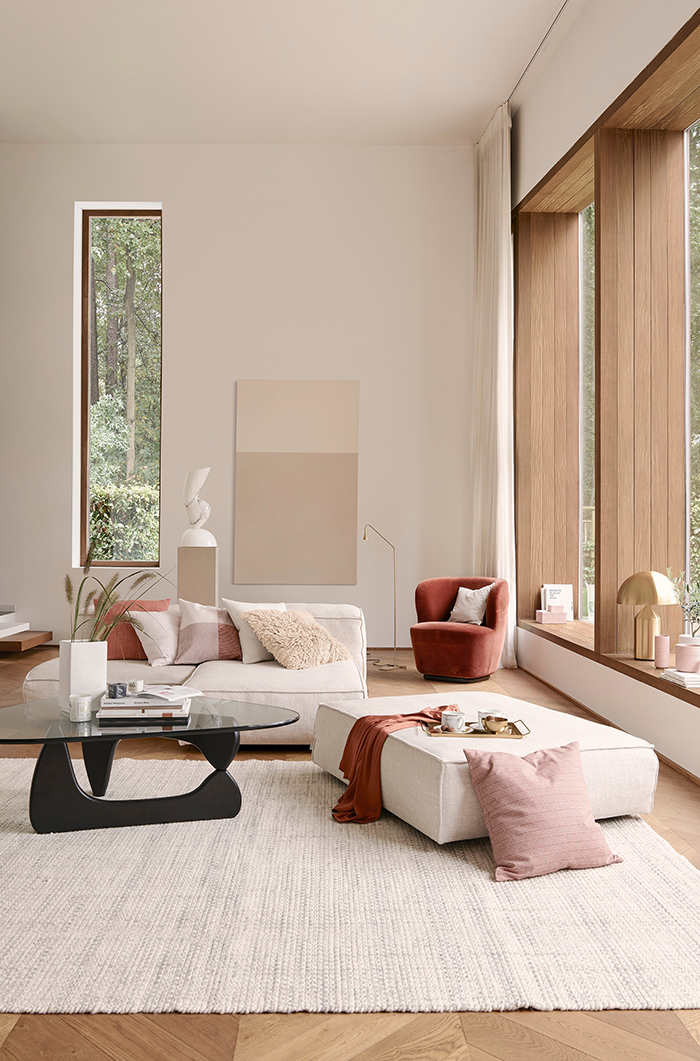 Now, 10 years ago, I would have scoffed at the idea that I would like brown shades. But, well, the more I see it, the more I’m liking it. I painted my lounge in Dulux Dusted Moss (a soft warm grey) back in 2010 and visiting friends and family thought it was bizarre (although most admitted they quite liked it) because it just felt really different. And now, after 10 years of grey shades dominating neutrals, beiges and taupes are suddenly feeling that little bit warmer and that little bit different as a backdrop to other shades. 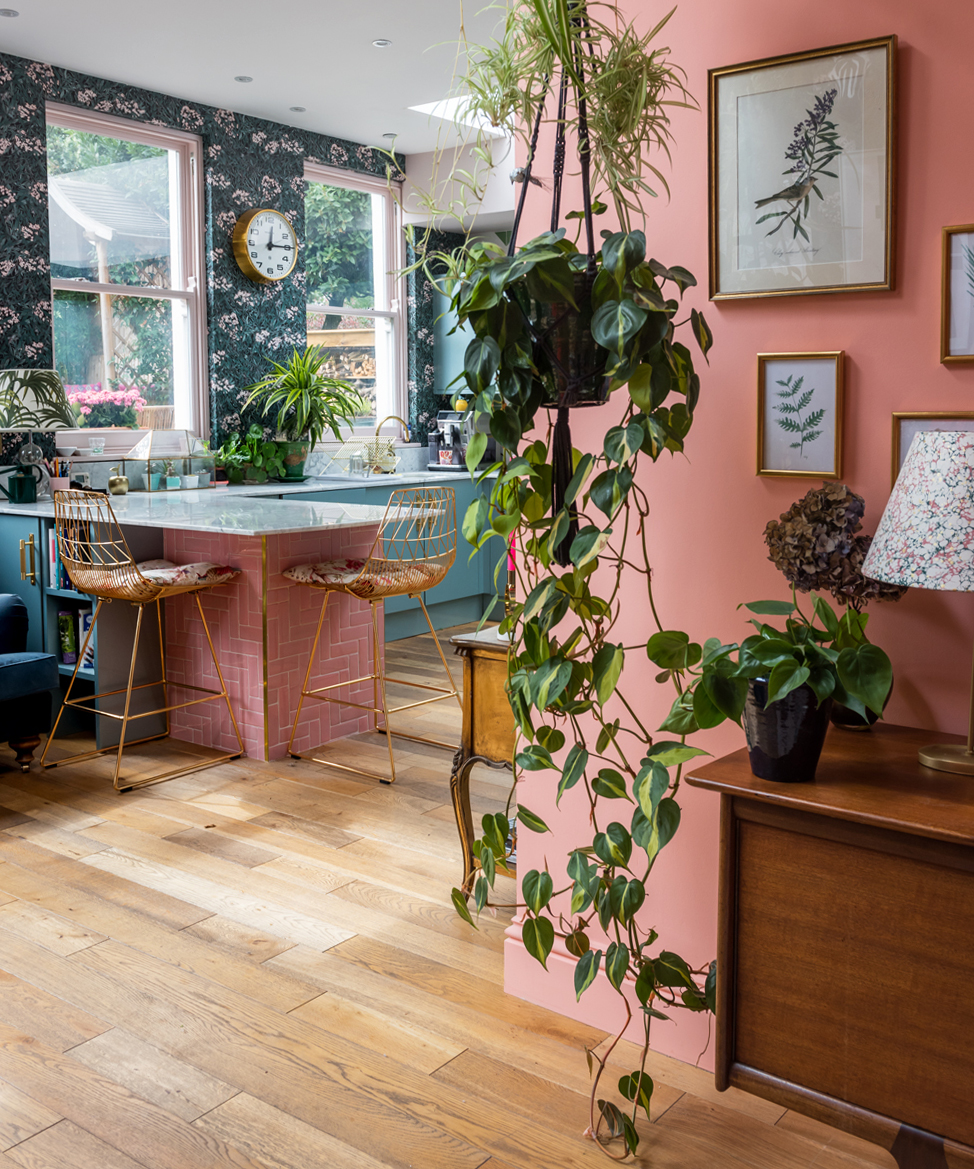 Image: Emily from The Pink House’s fabulous playroom in Painthouse’s Ida, a peachy pink that plays nicely with all the bold colour happening in the kitchen

I said ages ago that peach was going to be big and well, it is. It’s at least at the early majority stage now as I’m seeing more and more get on the peach trend and more brands bringing out pieces in this 80s favourite. It’s colour cousin, the (still popular) blush pink, looks beautiful with it and if you want to ramp it up a bit, go with a darker rust colour or combine it with burgundy. I’ve been barking on and on about those kinds of colours all over my blog over the last year and I’m still excited by that whole palette.

Basically, any shade of orange – from coral pinks to pastel peach to dark rust to deep chocolate browns are going to be winners in 2019. 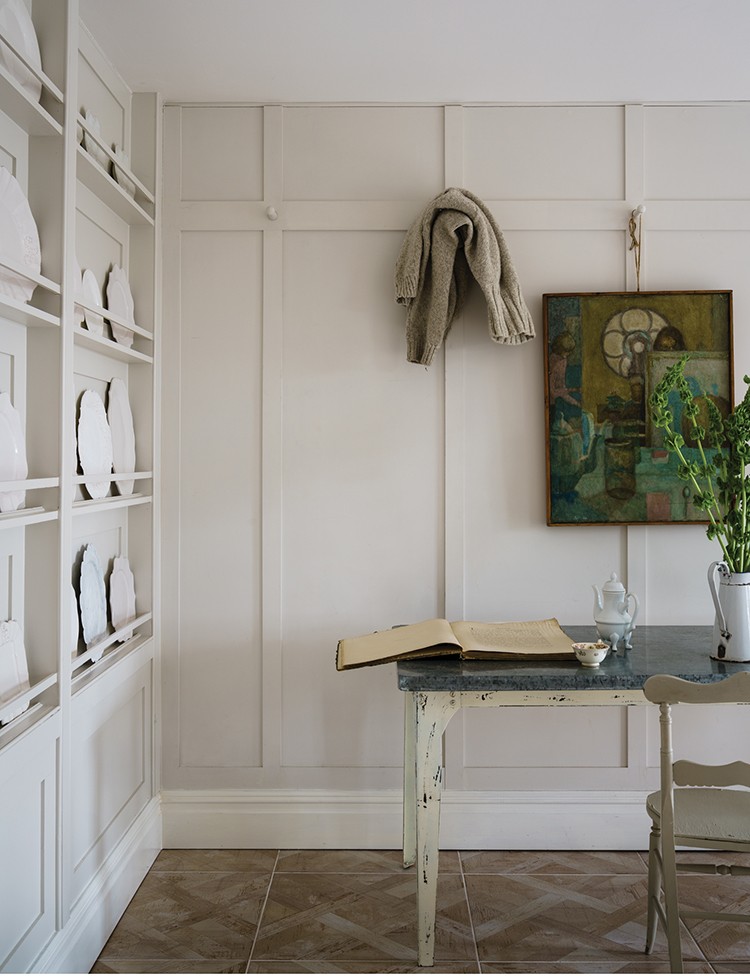 I think people are moving away from brilliant white as a base and leaning more towards shades that add a bit of warmth to a room. After looking at a whole bunch of samples, ‘School House White’, one of Farrow & Ball’s new colours is a great way to introduce yourself to the trend. It’s not technically a beige but rather a really lovely warm white that gives you a little bit of saturation without screaming and it’ll contrast nicely with any white woodwork or ceilings. 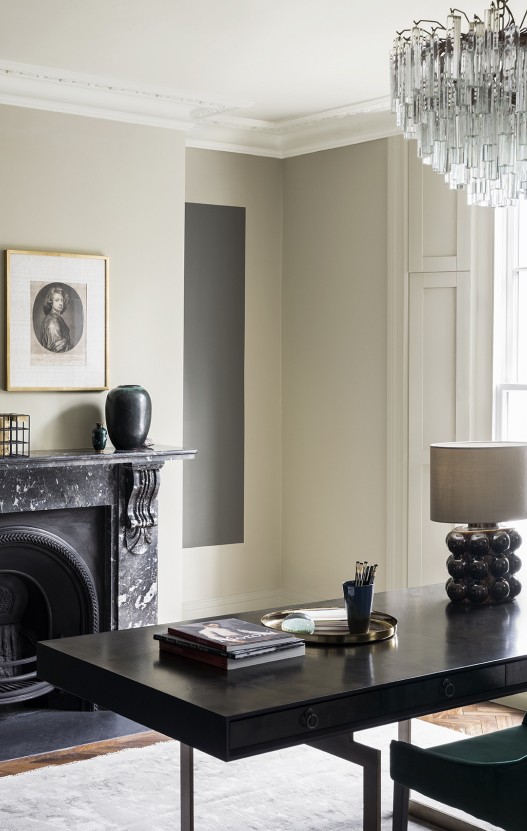 While brilliant white is still a good solid choice for a simple and no-fuss background (we used it in our bedroom makeover), if you have a room that doesn’t get quite as much natural light, then a warmer, softer shade of white with just a hint of pigmentation will give you a similar look with just a bit of softness.

Return to the 70s 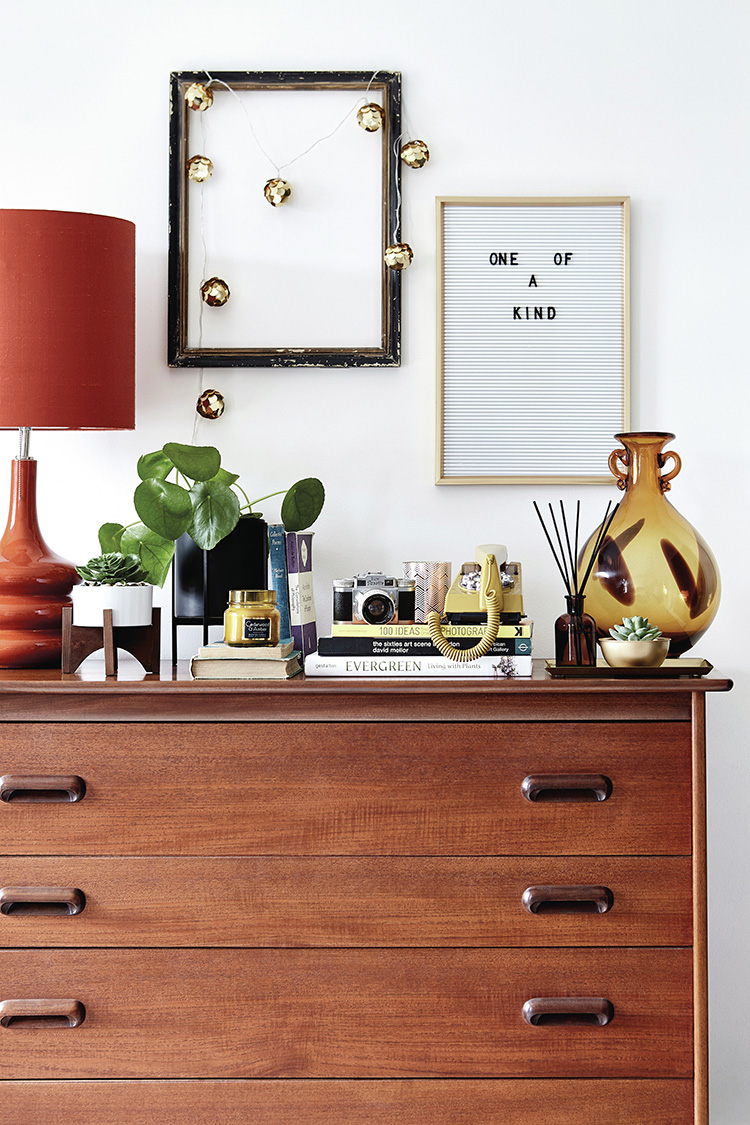 Now this plays a part in why all these warm shades like beige and rust and orange are so big right now. They play right into the retro feel of the 70s which suddenly feels a bit cooler than what we have been seeing for the last decade or more which is mid-century modern. Again Mid-Century modern isn’t ‘out’ – it’s again just in the ‘late majority’ stage so you can still indulge if you love it. 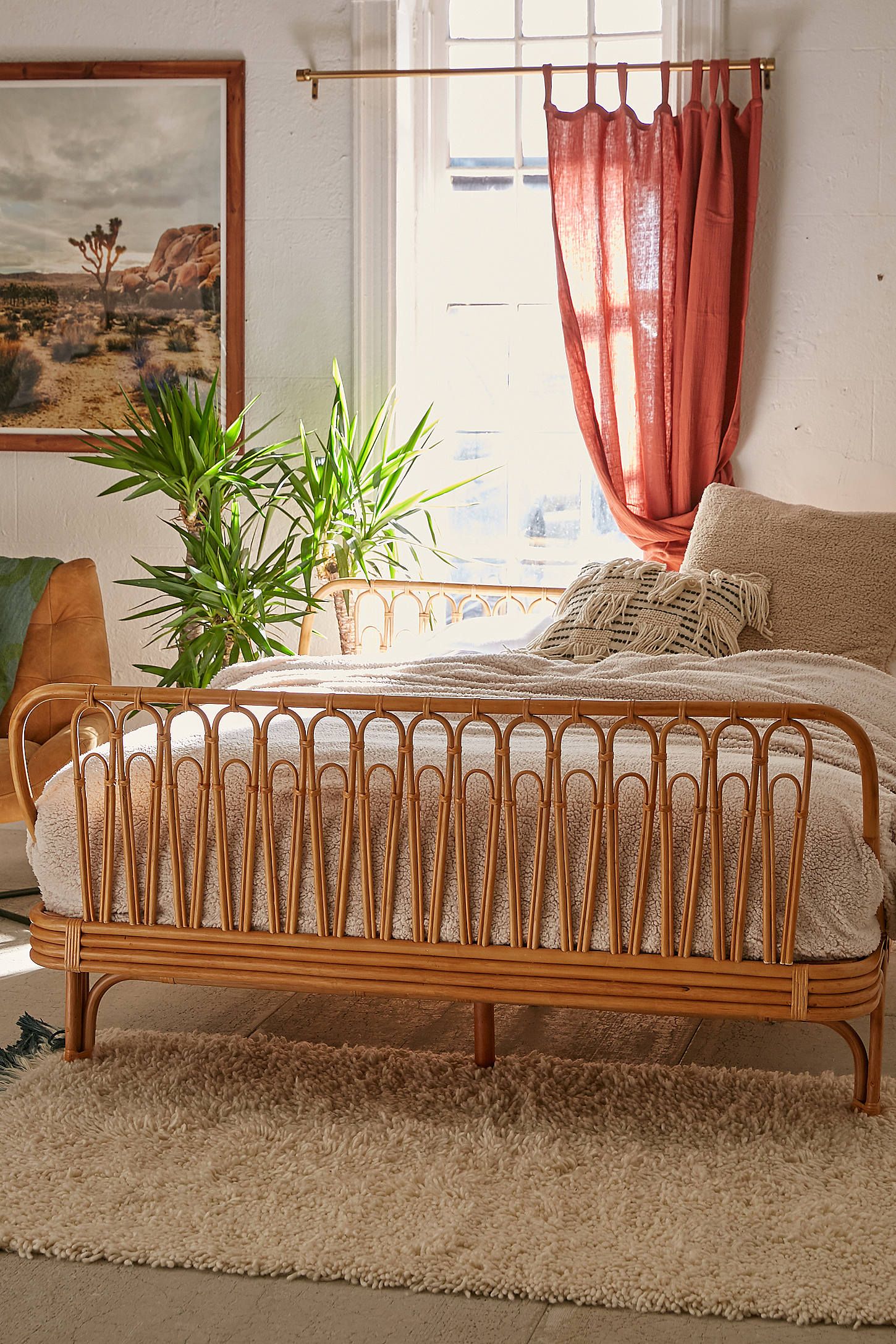 This look is more in the early majority stage (even if it was on my 2018 trend post) but this time around, I’m seeing a lot of rounded sofas and plenty of fringing on everything from sofas to lampshades to mirrors and more – huge news if you want to get into the 70s vibe ahead of the curve. Of course, the whole boho look is still going strong but this definitely has a bit more of a retro vibe with lots of natural textures, woven furniture and lots and lots of shades of orange and beige. Yes, I was a small child in the 70s so while I personally can’t see myself recreating our orange and black floral wallpapered bathroom from my childhood home, there’s still little hints of the colours, textures and shapes that feel at once both nostalgic and new. 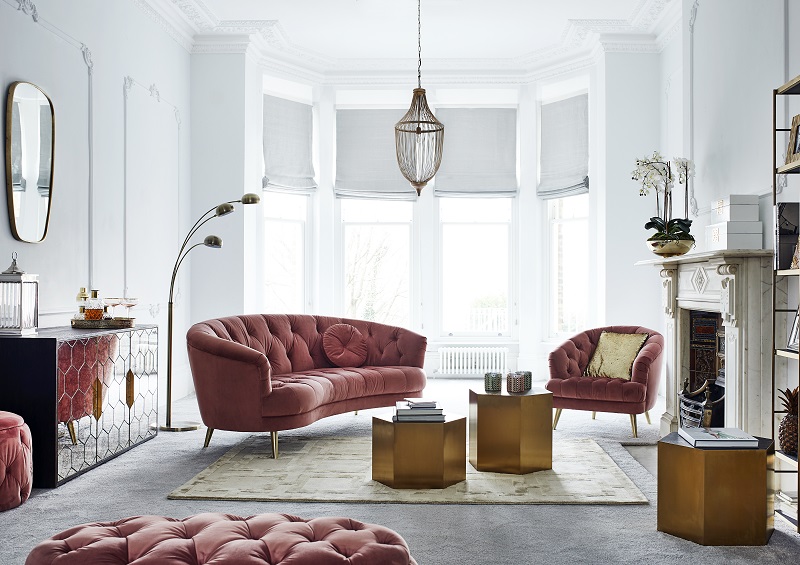 In fact, round shapes are pretty big news right now. Curvy tiles, curved sofas, round dining tables – the circular shape will soften all the straight edges of a room and give it a bit of a feminine vibe. It’s a bit of Art Deco influence coming into play and probably a reaction to all the straight, hard lines of Mid-Century modern. In an uncertain world, I think people are looking for soothing organic shapes and well, curves in a room do feel that bit more relaxing and inviting. 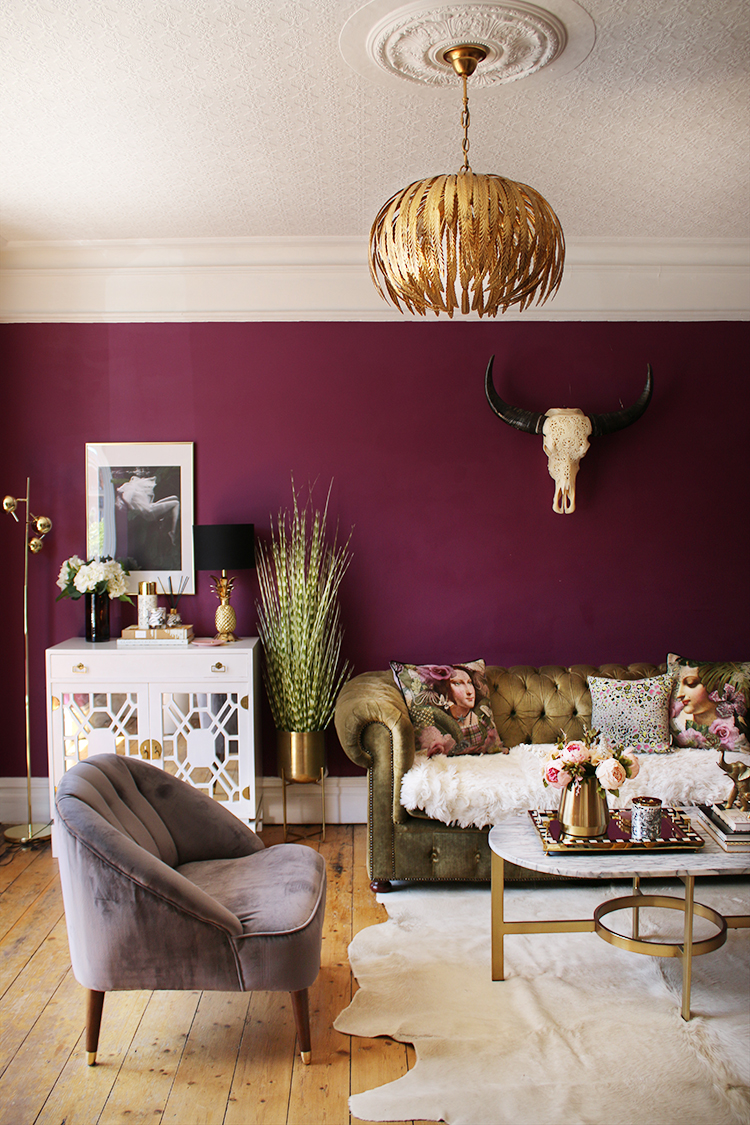 So this is the stuff that’s still at the peak of the bell curve or in late majority stages which means they’ve been popular and are likely here to stay at least through next year and possibly beyond: Velvet everything, brass and gold, blush pink, large format artwork, handcrafted and artisan pieces, bohemian styles, Art Deco-influenced furniture and design, mixed material kitchen and bathrooms, herringbone flooring… you get the idea. Pretty much everything that was really popular this year and many of the things I predicted over a year ago are still strong trends and continue to dominate the design world so you can still have fun with all of those.

And, of course, I still love plenty of those things as indicated in my living room above! But the trends I highlighted in this post are the ones that feel fresh and different to me and therefore, I’m a little excited about incorporating at least a few of these into my home over the coming year. What about you? Any trends you’re seeing that you’re excited to try? Let me know in the comments!