So for the last two weekends, we’ve been working on all the wall panels (or moulding) on the dining room walls. We probably would have finished it last weekend but half way through the work, our staple gun decided to die so we had to move on to a few other things! Anyway, the progress photos probably don’t look all that impressive but I figured I’d share where we are with everything! 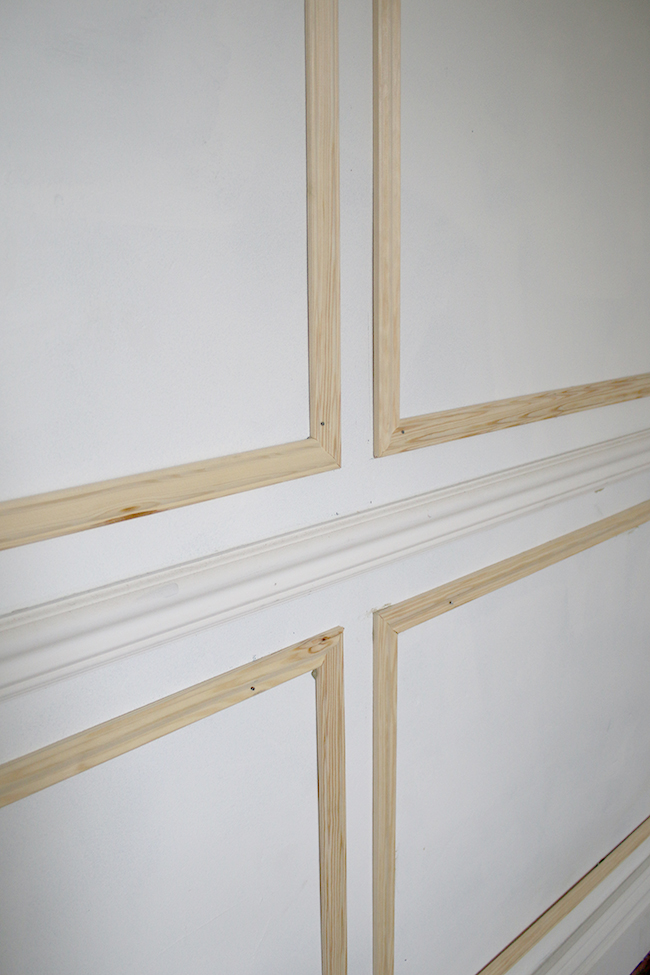 Here’s what we’ve accomplished since my last update:

I painted all the skirting boards, both doors and all the architraves in glossy white. I decided to try a Dulux water-based paint for this because the oil based glosses in white go yellow so let’s hope they can withstand a bit of wear and tear from the pets. The room immediately looked brighter just changing that one small thing. I really wanted Wayne to install the door handles this weekend but we ran out of time as his mum was coming over on Sunday afternoon so we had to down tools a little earlier than usual. Oh well, that’ll have to happen next weekend now!

We started to install all the moulding last weekend and completed it this weekend. We chose this pine wall panel moulding from Wickes for the job but had to make 3 separate trips as well as place an online order because we needed 38 pieces and well, trying to get that many in one go was challenging to say the least – it’s a long story so I won’t bore you with that! Then there was the death of our staple gun so yeah, it was only this weekend that we actually finished it! 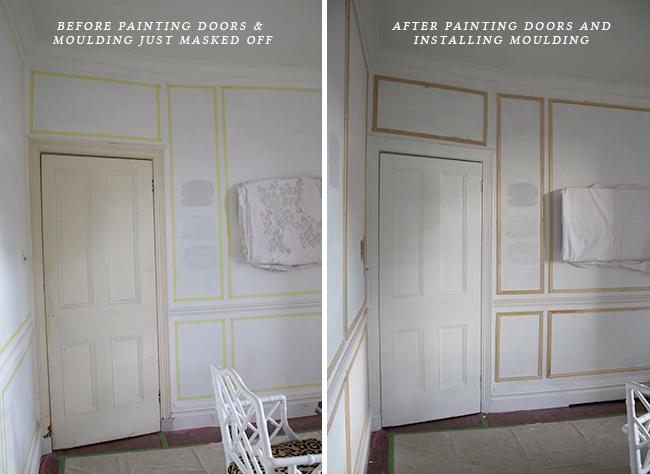 It wasn’t actually too bad of a process but it was very much a two-person job for the entire thing and so I couldn’t get too many pictures of the process. Essentially, we constructed the panel first before installing them with grip adhesive and small panel pins on the wall. You can see some of the work in this slideshow if you’re curious! 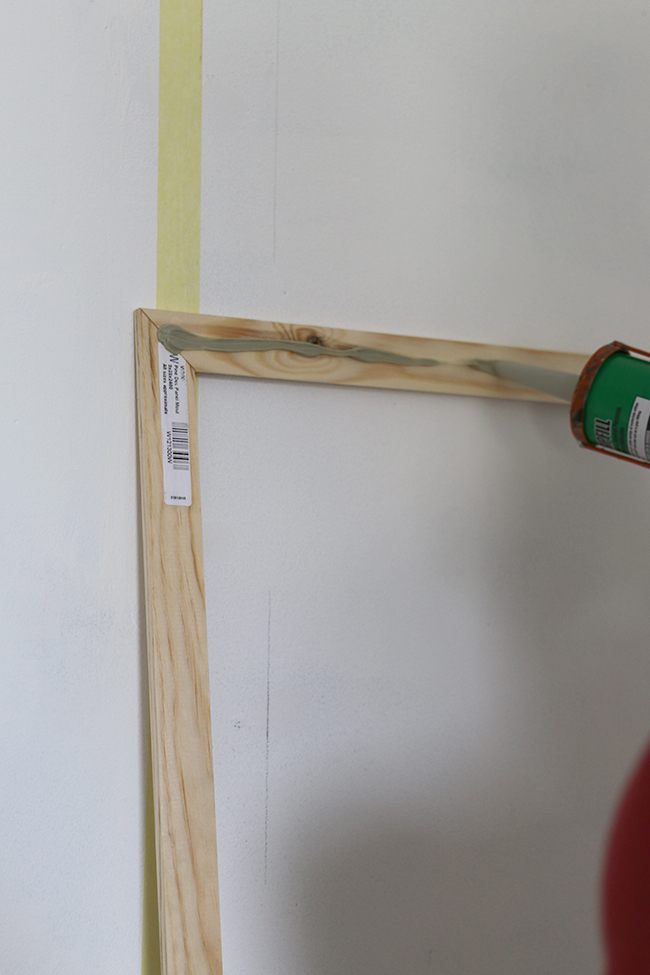 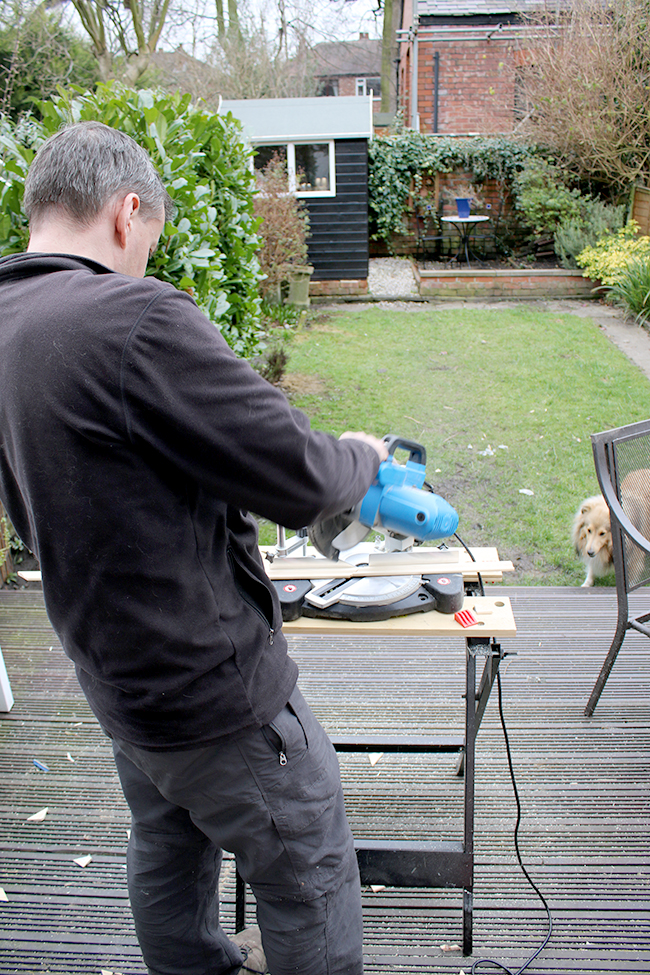 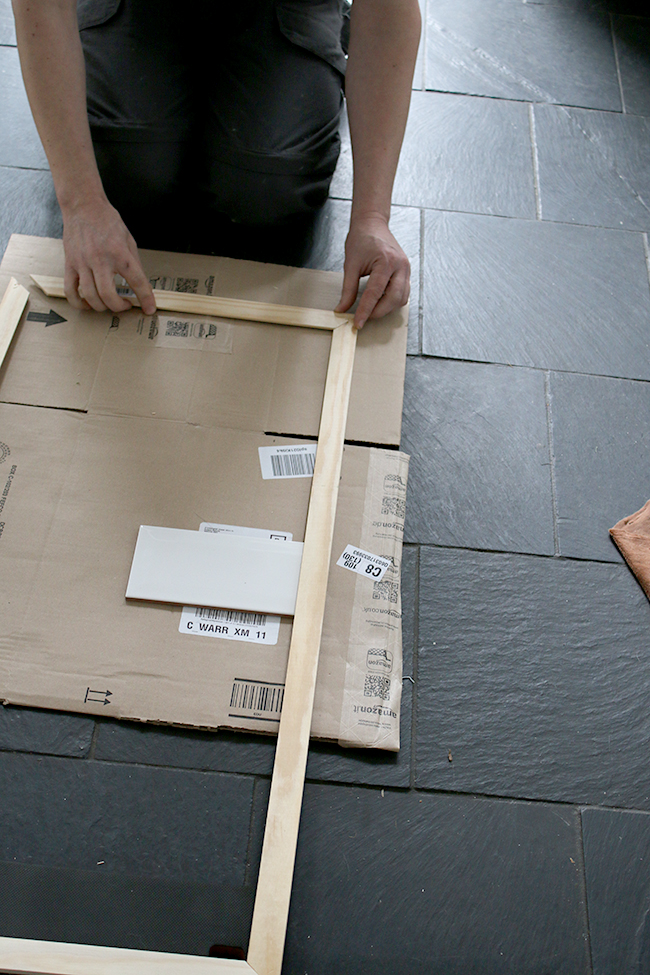 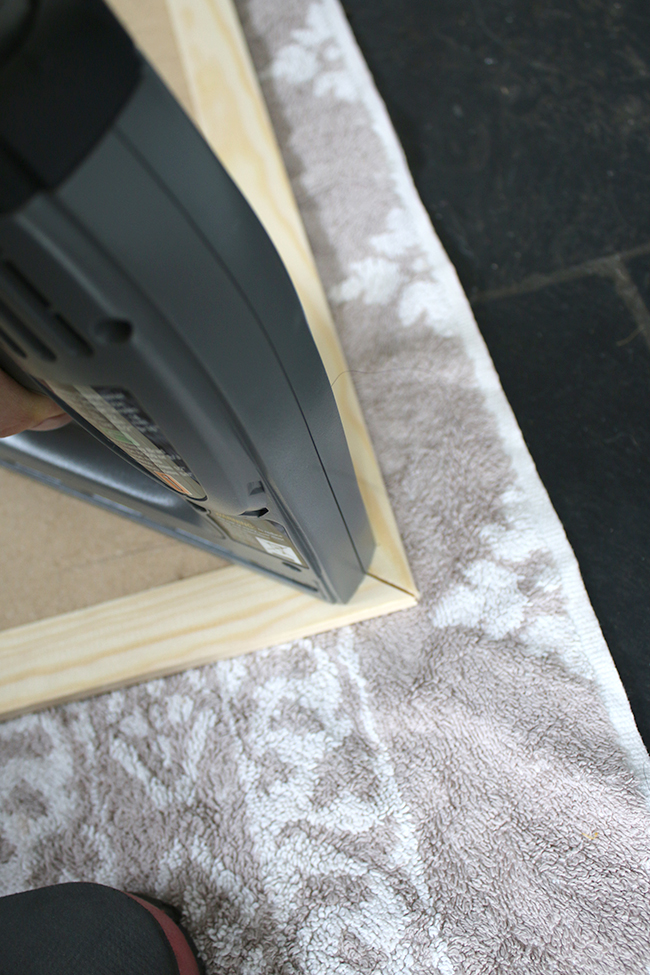 It was actually a lot easier than we’d anticipated, just a bit of a long and drawn out process! Wayne cut the pieces to size using our mitre saw, I then stapled them together and applied glue to the back. Then while Wayne held it up to the wall, I had to adjust the panel using wood templates so it was perfectly level and at the correct height. Obviously this is not shown in the slideshow above because I couldn’t hold the camera at the same time and I’d not set up the tripod because I’m a terrible blogger. Once we were confident it was in the right place, we both pressed it onto the wall and Wayne finally used small panel pins to hold it into place while the glue dried.

So if you were going to attempt this yourself, it’s not a bad job but definitely get someone to assist – I couldn’t imagine trying to do it with one person. 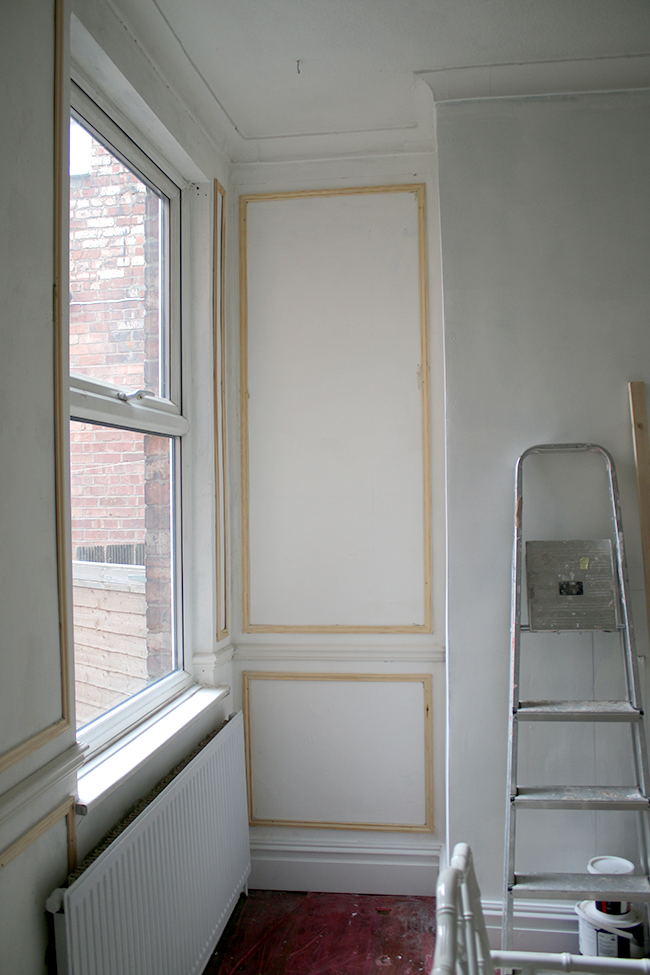 On Sunday, Wayne filled all the gaps with decorator’s caulk while I gave the radiator two coats of paint. I know my pictures make it look like Wayne is doing everything but I swear I’m just as involved and it’s definitely been a team effort – ha! ;) There’s still a bit of filling to do as we ran out of caulk (always the way!) so we’ll have to finish that up soon. 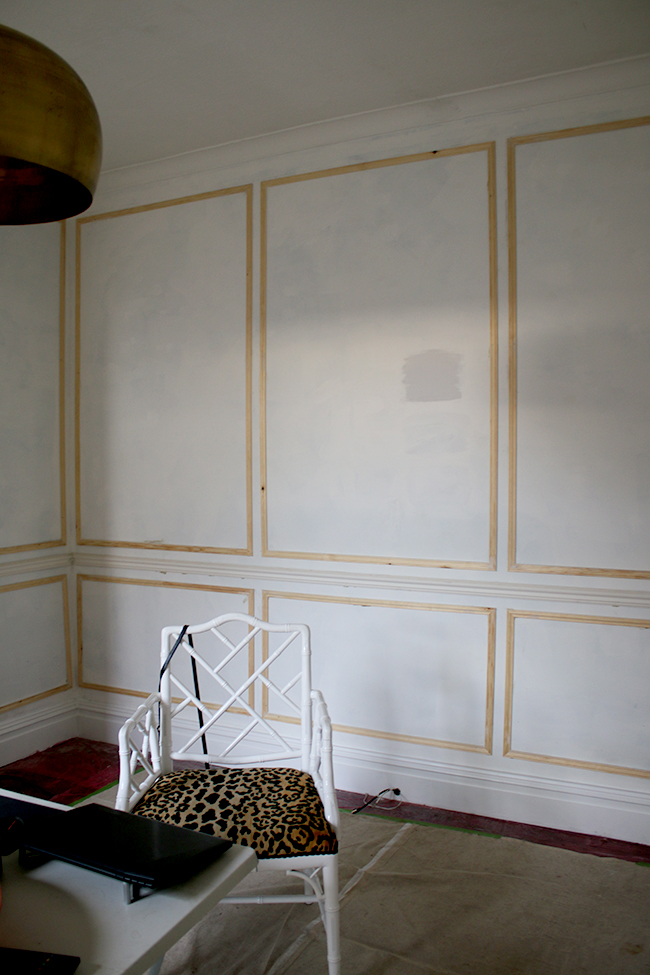 Oh one other thing we did was relocate the light switch. It’s always been in an awkward position being a bit too far and too high from the corner of the wall and I realised that in order for me to hang artwork on that wall, the light switch would have to move. So Wayne did take care of that one, digging a new channel and moving the wiring down and filling it all so that it’s now out of the way! 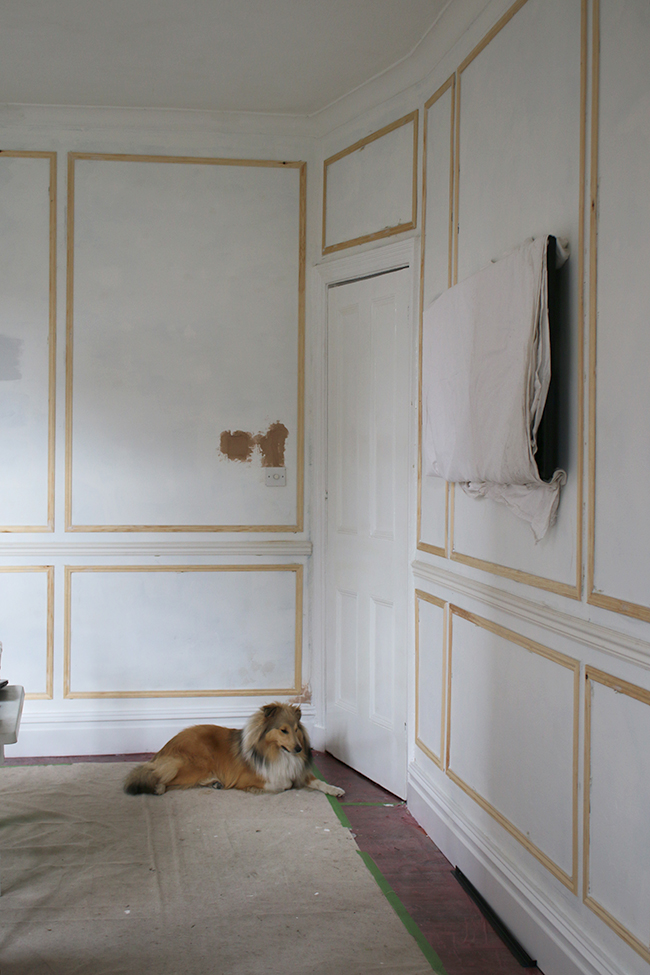 As it’s Easter weekend coming up, Wayne has Friday and Monday off (hurrah!) so we are hoping to make some really good progress for our four-day weekend. Here’s what we need to get done by next week:

I’ve ordered all the frames for the prints that are going in here as well so that should be coming fairly soon I hope! 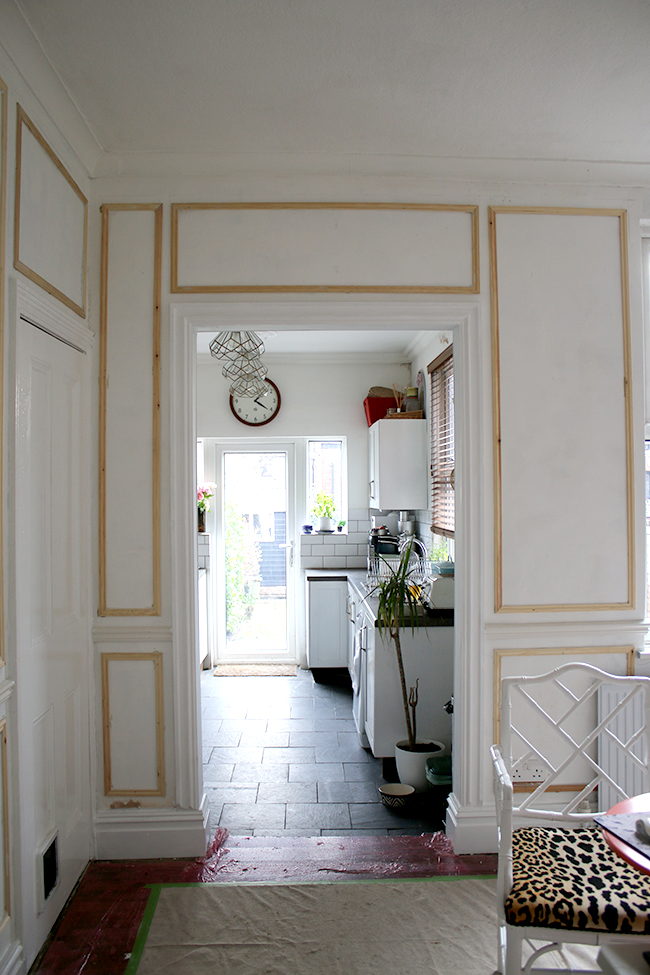 Why do we need to get all this done by next Monday? As crazy as this sounds, I actually have a film crew coming the following Friday (!!!) so the room will need to look as ‘finished’ as possible during the filming – great to light a bit of a fire under our bums, eh?!! Ack! That means we need to remove the floor protection, move all the furniture back into the space, hang pictures and minimally decorate simply to get all the things that are currently being stored in other rooms out of them so that they can be filmed. So that’s why we really need to get as much as possible done by next Monday.

The whole filming thing is all a bit hush-hush at the moment but it’ll be a fun collaboration so I’ll be able to share that with you very soon! Needless to say, it’s gonna be a little insane here!

And then over the following couple of weeks, we’ll finish everything off so while it’ll look mostly done, we will still have these items left to cross off the list:

So I’m hoping – as crazy as it seems at this point – to be showing you a fully finished room by the end of April. Fingers crossed things all go to plan. From here on out, there’s nothing particularly difficult to do so a smooth ride would be rather nice… Wish me luck we can get everything done on time!