Updating the Front of Our Home (Finally!)

I know, it’s been quite some time since my last post but I figured this was a makeover I was too damn pleased about not to stick on here along with a bit more explanation and images than what I can share over on Instagram. And well, if your summer plans include updating the front of your house, then perhaps this will serve as a bit of inspiration to get that job done because goodness knows, I wish we’d done it sooner.

That said, we’ve been in our home now for more than 4 years and the front of the house was pretty neglected even back then. But in the ensuing years since we purchased it, whilst we beavered away on higher priorities like the actual inside living areas and the back garden where we spent a lot of time, the front just kept getting worse and worse. And yes, of course, I’m totally embarrassed by this picture. 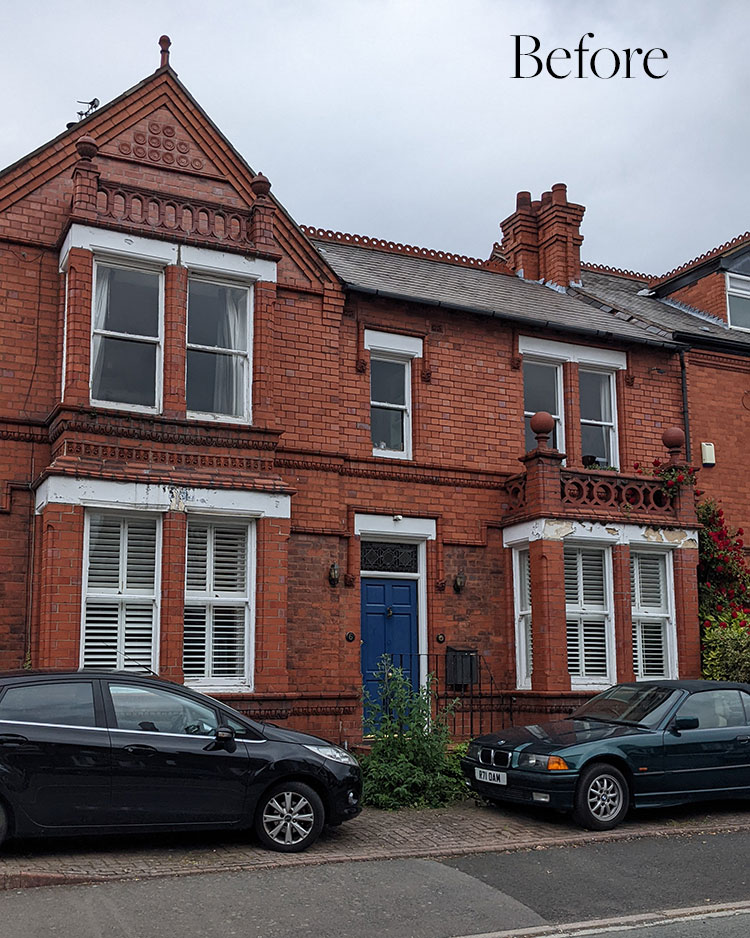 And honestly, I adore our house – this is pretty much our dream property, one I hadn’t imagined even 10 years ago we’d ever land, but you wouldn’t have known that if you were just passing by on the street. In fact, every time I came home or pulled up in the drive, my soul died a little. I would feel horrid pangs of guilt as I watched our neighbours across the street meticulously caring for their front gardens and paths. I’d see them out there painting windowsills and weeding and ya know, just generally being good homeowners taking care of their property, knowing ours looked so shabby in comparison (even if I knew the inside was much more presentable!).

But the funny thing about the front of your own home – you never really see it. If it was something I was staring at day to day, I’m sure it would have gone straight up the priority list but seeing as, ya know, I live and work inside the house rather than outside of it, it was easy to ignore… until it just couldn’t be ignored any longer and we vowed over the Jubliee weekend, we were going to sort it, finally.

As an aside, this is actually the last bit of the house that we hadn’t really touched – every single other space inside and out has had at least a bit of attention (if not a full-blown makeover) so it was like the last little bit we had yet to put our own stamp on. 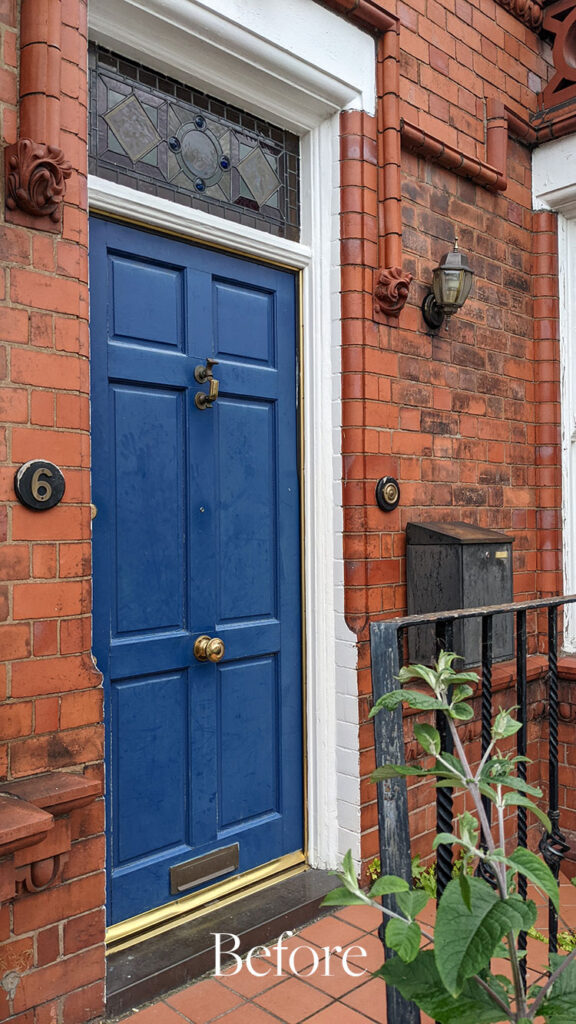 So what was wrong with it aside from the fact it was so neglected, it might as well have been the local haunted house? Well, the paint on the windows was peeling and dirty (our neighbour who’s lived on the street for decades remarked as we were working away on them that the last time anyone did anything with them, it had been at least 15 years ago), above the bay windows, the peeling paint was such an eyesore to the point of embarrassment.

The dark blue door was such a strange foil to the reddish-orange bricks – I’ve seen blue doors with red brick homes that looked great but the choice of colour here was just not one I’d make. It made the whole front of the property look depressed and uninviting (and I’m sure part of that feeling was just my dislike of using the colour blue in my home but there ya go, we all have our own personal weirdness when it comes to colour).

The lighting was old-fashioned. And don’t get me wrong, it’s an old Victorian house which was built in 1889, so it’s okay sometimes to go with more traditional choices here but I just didn’t think they did a thing for the house. Plus, they were really old and rusty and dirty and well, they needed to go.

The metal post box was rusty and sun-bleached, and the railings were peeling and rusty too. Oh and the ivy which I quite like around the front of the house had started to get out of hand, growing up and into the steps with far too many weeds poking through.

Affiliate links may be used in this post. You’ll never pay more by clicking on my links but I may earn a small commission from the brand as a thank you for the referral.

And so, over the Thursday, Friday and Saturday of the Platinum Jubilee Weekend (here in the UK it was a 4 day weekend to celebrate the 70th year of Queen Elizabeth’s reign), Wayne started tackling filling, priming and painting the windows and above the bays and I got to work on the door and porch. I’m sure this is how Lizzy would have wanted us to spend the extra-long weekend rather than eating tiny sandwiches and scones and covering our house in Union Flag bunting. 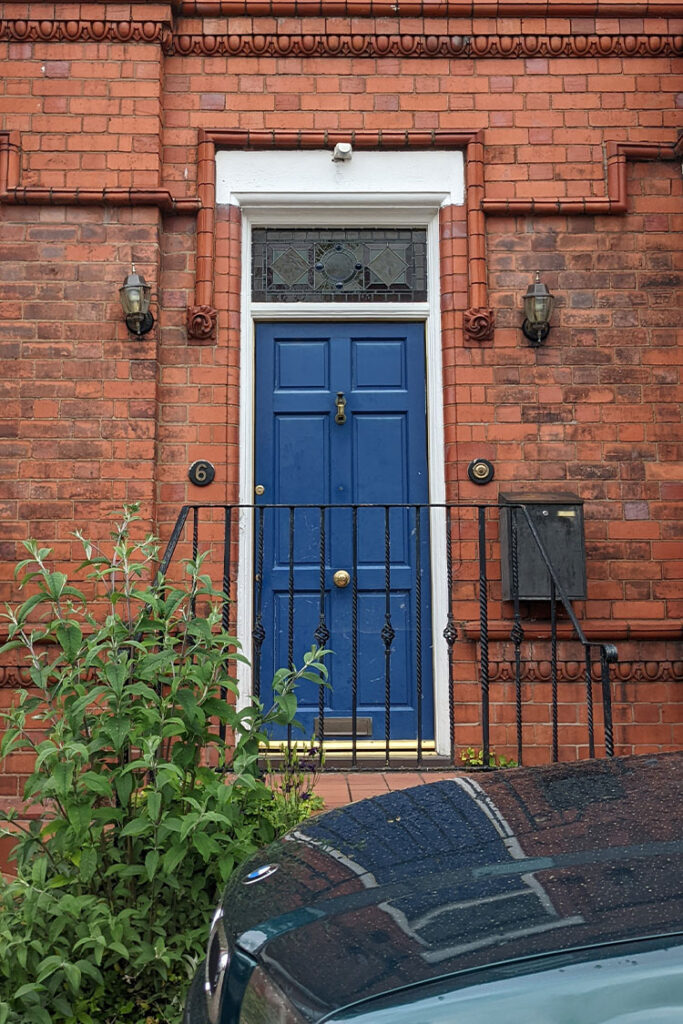 The door itself was in relatively good condition and I didn’t want to spend more on this than necessary so I gave the door a clean with sugar soap and a light sand and used Farrow & Balls Exterior Primer for Wood & Metal Surfaces in the Light Tones. The following day, I gave it two coats of Farrow & Ball Mizzle in their Exterior Wood & Metal Surfaces paint – the same colour as what we have on our kitchen cupboard doors. I figured I loved it inside, so why not use it outside as well? Plus, I think it’s nice when you tie the colour palette across your home. In the back garden, there are a lot of these pale sage green tones too so it all sort of ties together. 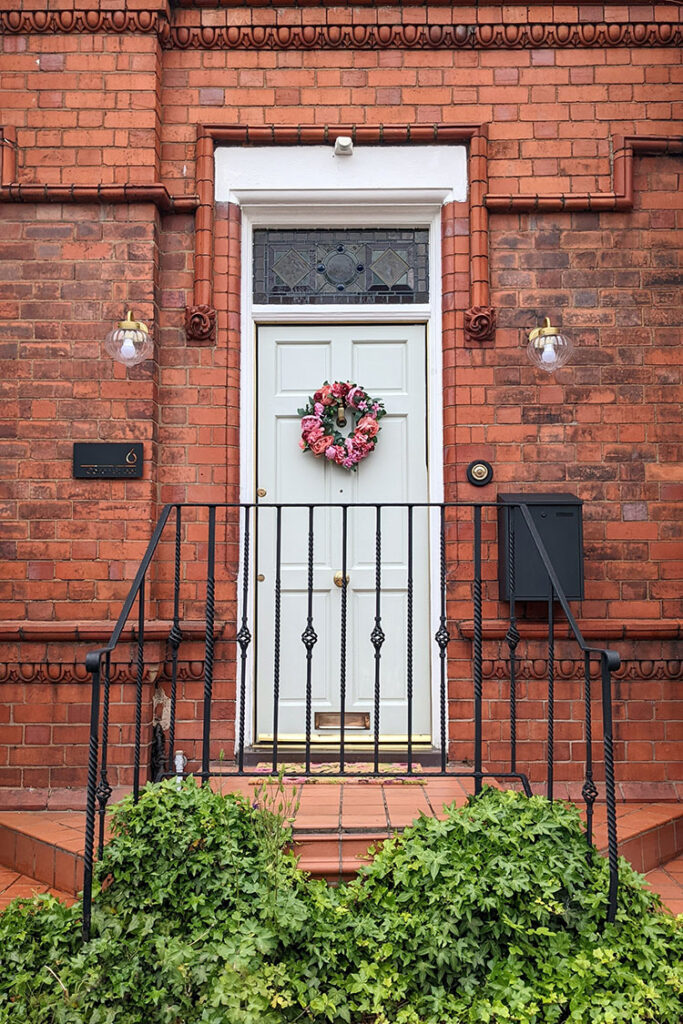 I also used Brasso to shine up the door hardware (I quite liked the existing knocker and door handle so there didn’t seem to be any point in changing them) but my goodness it was hard-going. I had someone recommend Bar Keeper’s Friend instead so for the areas that I just couldn’t manage to remove the tarnish, I’m going to give that a go and see if it budges.

I have used Ruskin’s Black Heat Resistant Paint on both our outdoor BBQ as well as inside on our fireplace and I had plenty left over so figured I’d use that for the post box and the railings. I gave both of these a good scrub with a wire brush to remove any peeling paint and rust, then a light sand followed by a couple of coats of the paint. They’ve both come up a treat and the postbox especially looks good as new now. I even used this paint to touch up the existing doorbell after I couldn’t find anything to replace it without a complete rewire (it’s pretty old I imagine) but I think it’s come up quite nicely. 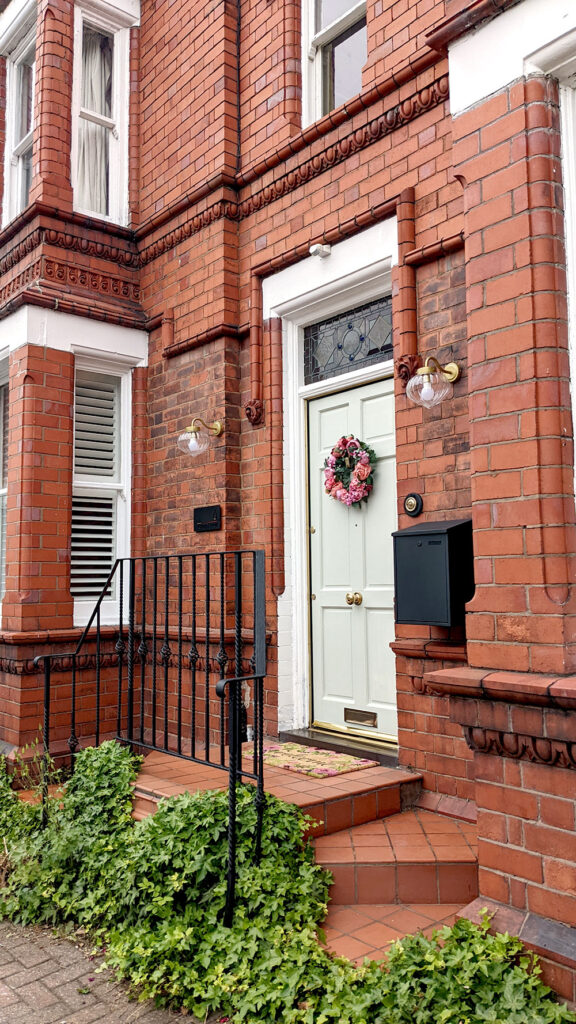 Wayne also swapped out the lighting and I chose the Voyager Outdoor Wall Lights from Dunelm – an absolute bargain considering I had been contemplating a few styles that were two to three times the price of these. I wished they were actual brass rather than just painted gold finish but ya know, for the savings and for how stylish they are, I can overlook this. Perhaps someday, I will swap them out for something more up-market but they do look rather pretty regardless. I only had a limited budget on this project and I splurged on the paint so ya know, something else had to give! I’m happy with the compromise anyway and they are so lovely and bright at night (they are on a sensor) and look pretty during the day which is basically all I wanted. 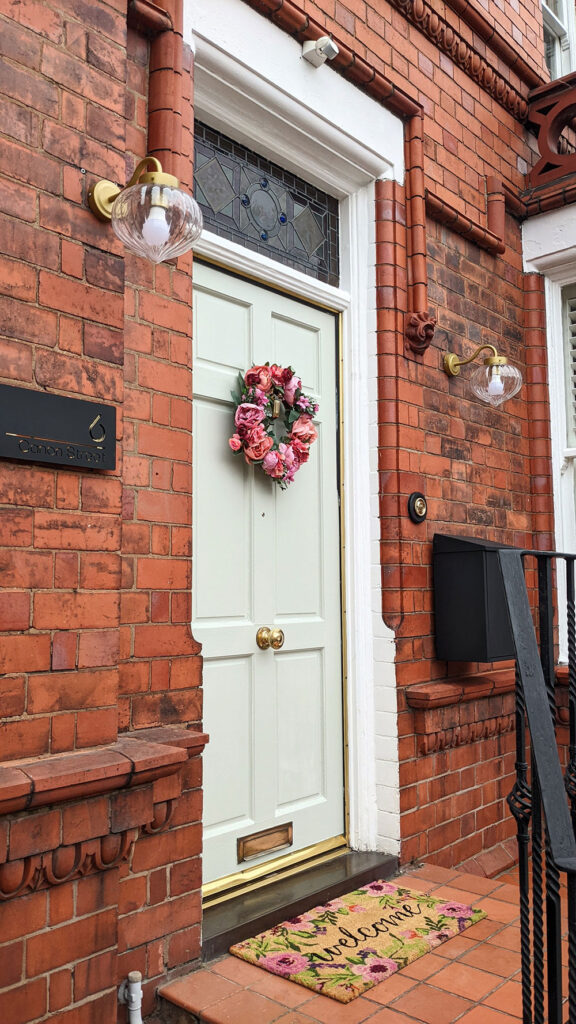 We also got ourselves a new house sign – the old one looked like a match for the old doorbell but it was falling to bits and I wasn’t a huge fan. I chose this design from House Signs Direct and I have to say, I rather enjoy the juxtaposition of the very contemporary sign against this traditional old house. It’s acrylic and the gold finish of the typography shines beautifully in the sunlight. At around £30 for it, I couldn’t be more pleased. 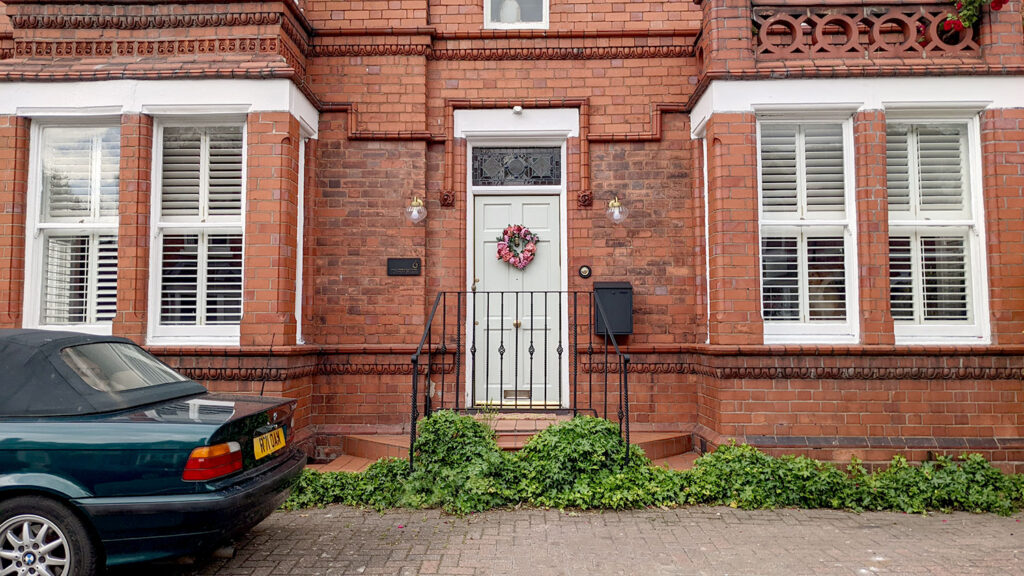 Now the windows are in a sorry state as it is – single glazed wood sashes that are more than 100 years old are not the thing, let me tell you. However, we live in a conservation area (which means we aren’t allowed to change too much and thus the reason why the updates may seem quite minor) and replacing these with something ‘like for like’ will cost us somewhere in the region of about £2.5k PER BAY (we have 3 on our home) so yeah. That’s why they haven’t yet been replaced. We hope to do maybe one bay a year once the rest of the house is sorted but for now, a bit of a sand down, a lick of Zinsser’s Peel Stop, some repair work with various fillers and a fresh coat of white paint will do for now. At least they are looking much cleaner and tidier.

Above the windows, where there was so much discoloured peeling paint, those were sanded back, the Peel Stop applied and a couple of fresh coats of Little Green’s Down Masonry Paint was enough to get them looking fresh and clean again. 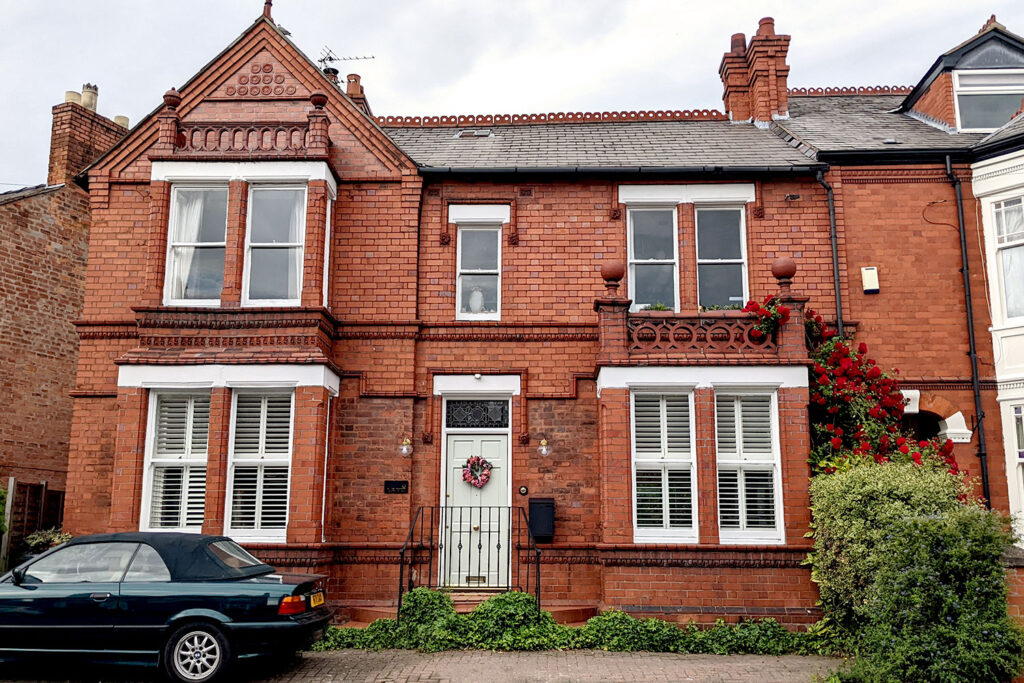 Finally, I added a couple of pretty finishing touches. The Bloom Door Mat from Next married nicely with the climbing roses on the side of the house, currently, in full bloom, with quantities of deep red roses like I’ve never seen before. And I added a pretty inexpensive floral wreath as the final flourish on my freshly painted door. 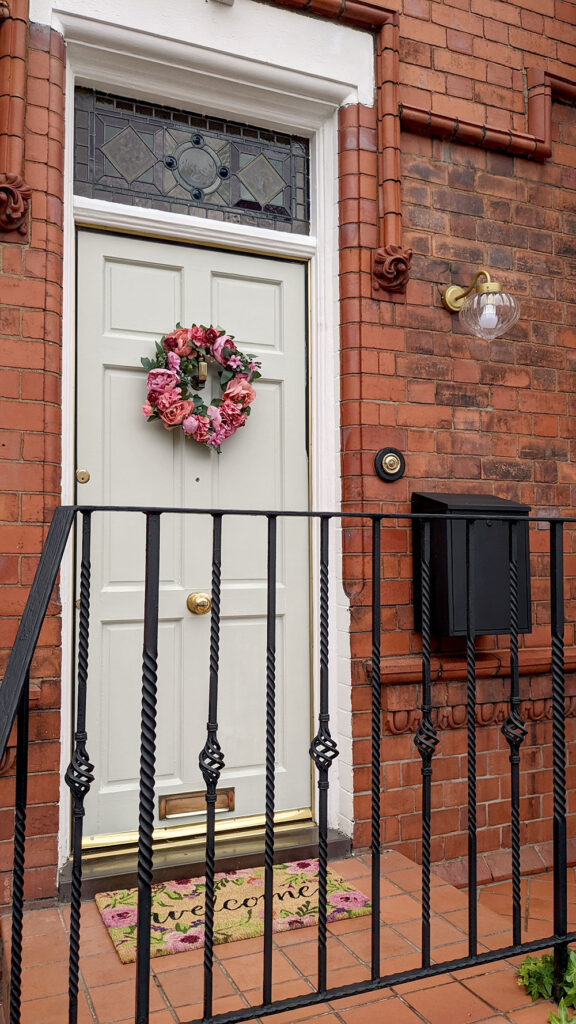 I couldn’t be happier with the outcome of our work. Instead of the “haunted house of despair and sadness” we had going on, the house has been lifted from its doldrums with an inviting new look. It’s just a shame it’s really only the neighbours who get to appreciate it. I really need to make more excuses to go out so I have reasons to just stare at how pretty it all is.

This site uses Akismet to reduce spam. Learn how your comment data is processed.