I’m working with a few brands on this project although this post is not sponsored and falls outside of those agreements.

It’s taken a long time to get to this point but I’m so excited to say we’ll be starting very soon on the renovation of my combined office and dressing room. It was a project that had to be delayed (we originally wanted to start in early June) but things are back on track and I am so so excited to see how this space will be transformed over the coming months. I figured I’d share some of my plans with you today!

So when we moved into the house, you might recall I referred to the decoration of this space as ‘prison chic’! ;) The room was painted in a pale grey (which wasn’t actually terrible to be fair) but it also featured a rather awful grey brick-effect feature wallpaper and cheap grey linoleum flooring. Within 2 days of moving in, I tore the wallpaper off the wall, preferring to live with looking at bare plaster rather than the atrocity of fake grey bricks every day. 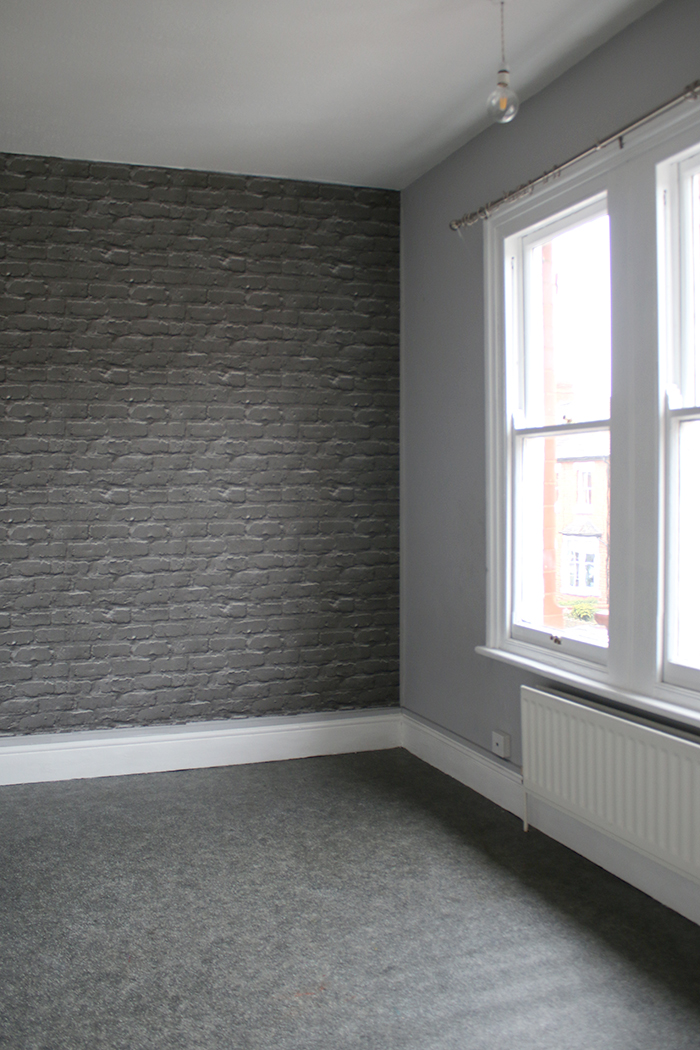 At the time, I had intended on creating an office space in what is currently our old kitchen/utility room (another space awaiting renovation) and use this space as just a dressing room but having spent so much time in here, I realised there was no reason not to combine the functions in this one room. 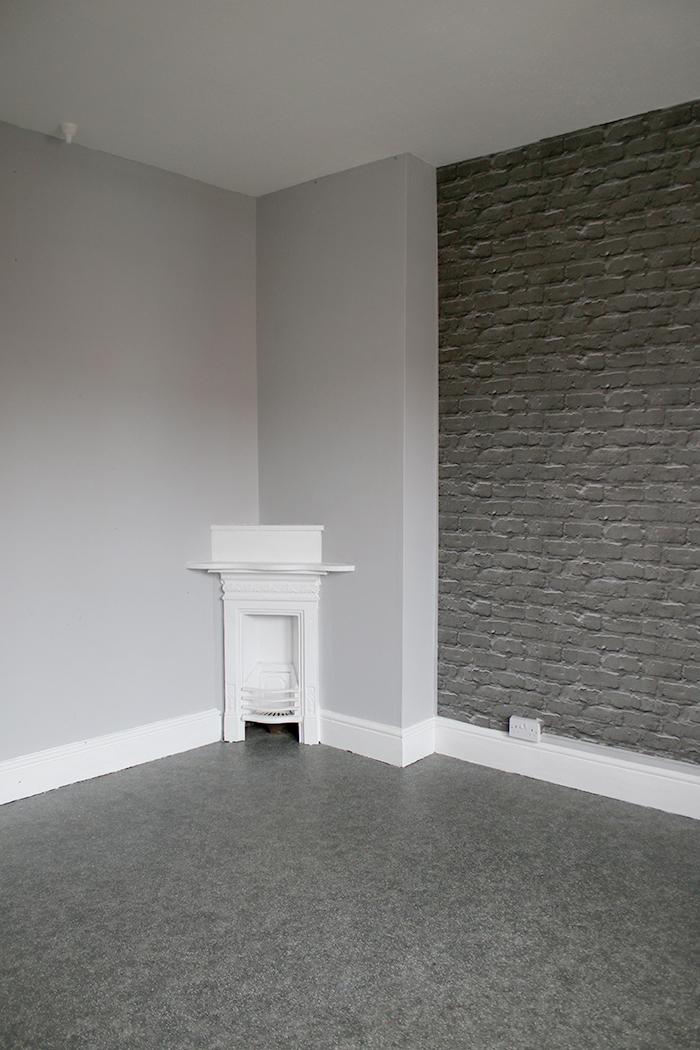 Despite the ugly decor, the room actually does have a lot going for it with high ceilings, big double windows overlooking a small balcony, a tiny original corner fireplace and it’s the second-largest bedroom at 3.60M x 3.70M (11ft 10″ x 12ft 2″).  This is why I always will encourage people to live in their homes for a bit before making any big changes as it will be easier to figure out how you are actually using a space. 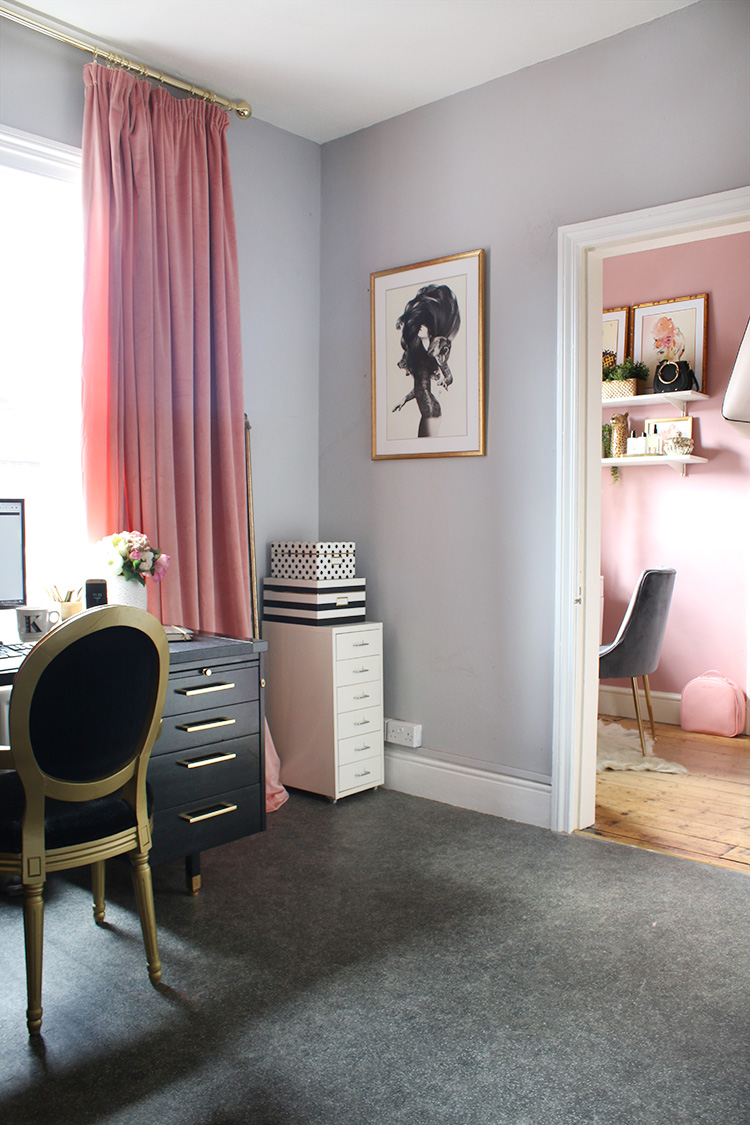 The funny thing is, I have poured more love and attention into my guest bedroom which is probably used once or twice a month (well, less these days obviously) than I have on this room in which I spend 6-8 hours in every single day. I basically just moved my old desk into the space and the mid-century sideboard I had in our previous home and combined that with some of the things I had in my previous dressing room. 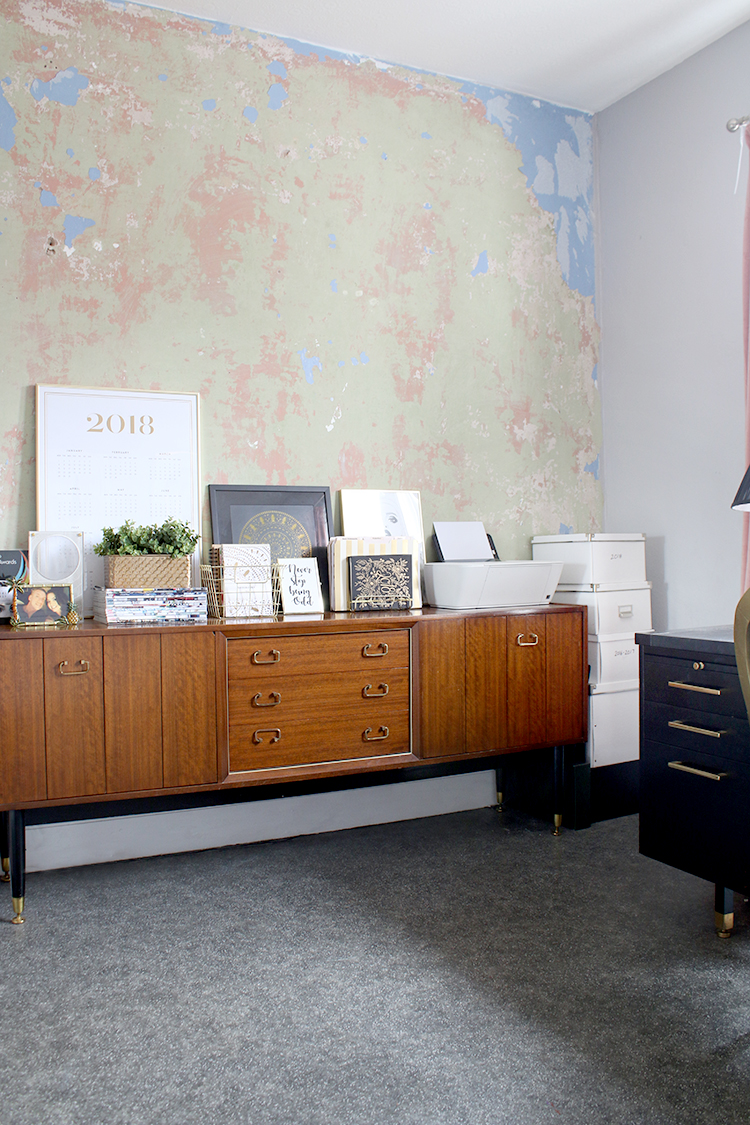 Now, let me just say these pictures are showing it all off MUCH NICER than what it actually looks like. These were shared a couple of years ago when the room was pretty tidy but let me tell you, it’s gone downhill from here (basically there’s just a lot more STUFF and mess) so that is saying something. I mean, nothing really ‘went’ with anything else but over two years, it soon became a bit of a dumping ground for furniture that had no real home and just basically a mish-mash of different bits and pieces. It’s partly why you’ve not seen much of it on my blog or social media because well, it’s pretty ugly and definitely not swoon-worthy! 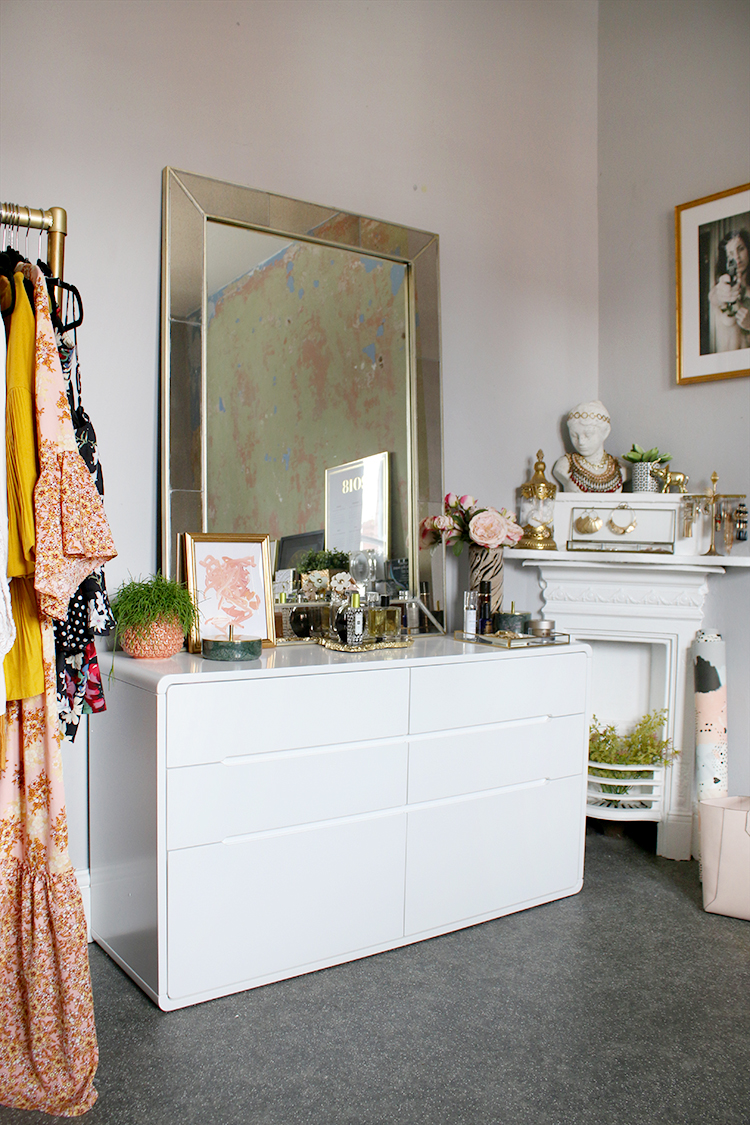 One other thing I realised quite early on is that I placed my desk right in front of that big double window. It seemed like a good idea at the time, having south-facing views over the street but there was a really big issue with this set-up. There’s so much glare on my screen that half the time, I have to close the curtains in order to see my screen! So I’m not only sat in a rather uninspiring space, I’m also sat in the dark! Not the most conducive to getting things done when most of my work is done online. There wasn’t really any other way to configure the room with the furniture I had and so I had to just live with it for a while but I knew it had to change. 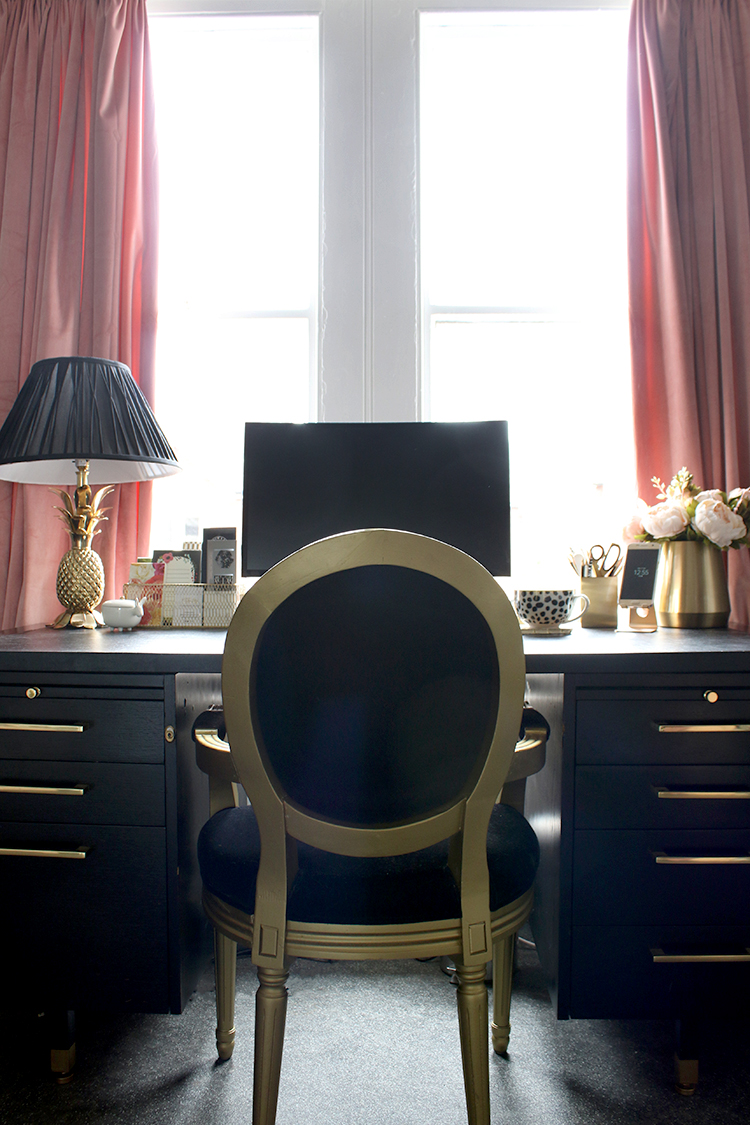 I’m really so grateful to be working with a number of sponsors on this project who are allowing me to create an inspiring space that will work so perfectly for my needs. One of those sponsors is West Elm, a brand I’ve worked with a number of times over the years and one I happily recommend all the time for beautiful quality pieces that last and last. I also approached Woodchip & Magnolia about working with me on this one. Nina, the owner of the company, is someone I’ve known for around 6 or 7 years and she produces the most beautiful work, a true talent in the industry and is just an all-around lovely person. I’d been eyeing up the Oasis mural for probably 2 years now, desperate to use it somewhere and I’m so excited I will be finding a home for it in this space. 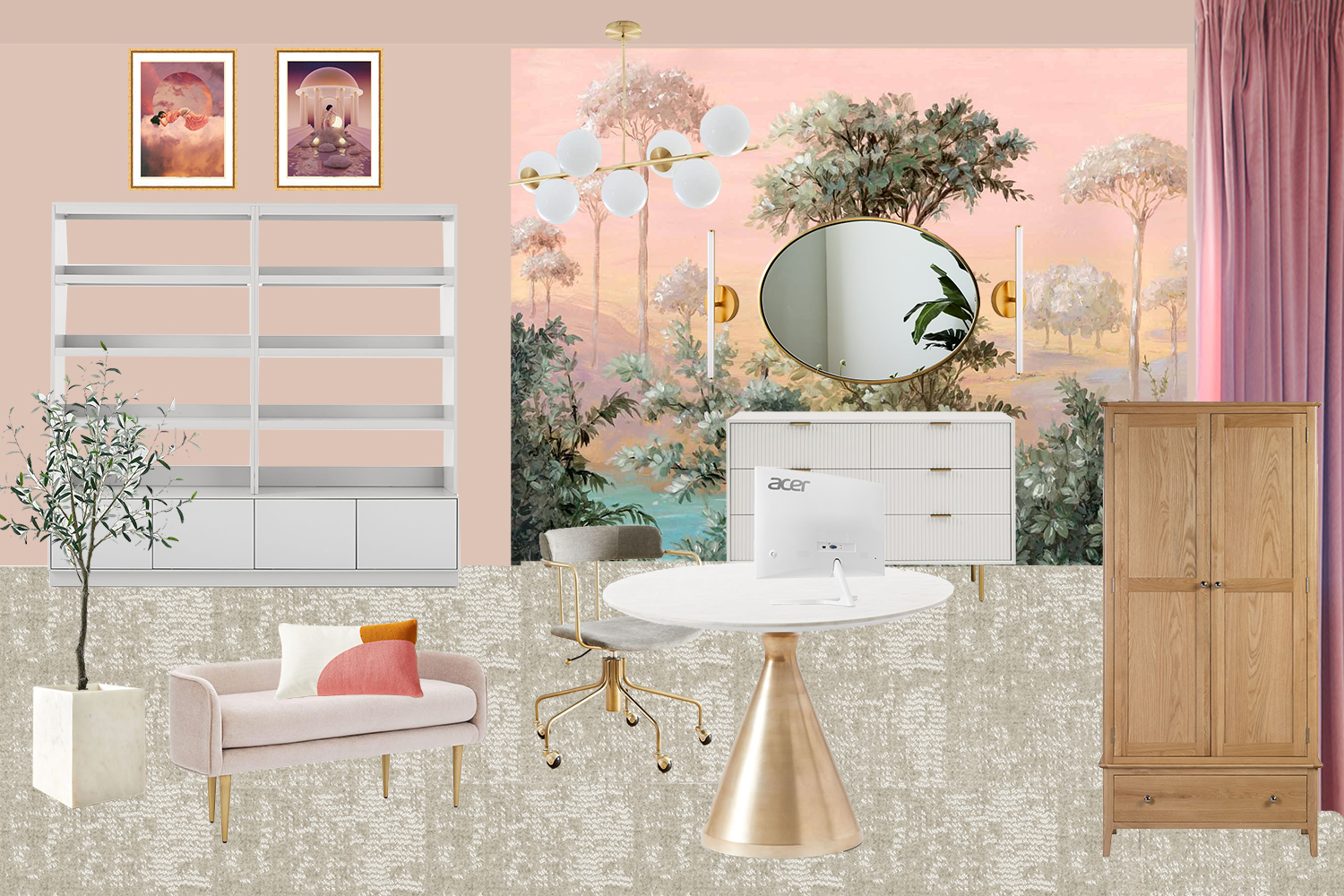 Now as you can see, I really just want to let go of all the heavy dark furniture that’s currently in the space, preferring a much brighter, lighter space that works better with my aesthetic in this house. The white chest of drawers will likely move into the guest bedroom and I’m selling most of the rest of the furniture, not really having any other place for it.

One of the first things you might notice is that I’ve opted for a small round dining table instead of a traditional desk. I think with combining functions in a room, it’s nice to have a few pieces that are a bit more transitional and less formulaic. The table will be set in the centre of the room, rather than against a wall or window and I’m going to have a socket installed on the floor nearby to reduce some of the dreaded cables and wires we all hate to have to manage. I’m also going to be getting a white monitor and white cables, hopefully tucking them discreetly under the table so they won’t be on show! Stay tuned to see if I can make it work! ;)

I have also chosen a large shelving unit with integrated cabinets. Initially, I had been considering pretty delicate twin glass and brass shelving units but with starting the candle business, I really need a lot more space to hold stock and supplies as they are starting to take over the space right now so this is just a lot more practical. It means I’ll have a place to stash things like shipping boxes as well as my camera equipment and any office supplies within the cabinets.

The wardrobe is the only thing I’m unsure of at the moment so that’s subject to change as I’m still hunting for the right piece within my budget. I have lived with a large open clothing rail for years now and to be honest, I’m over it now! Ha! I just want a cleaner aesthetic in here and while a double wardrobe probably won’t hold all of my clothing, eventually we are hoping to get built-in wardrobes in the master bedroom so until then, I’ll put anything out of season into storage and just have the current season in this one for the time being.

I’ve also decided I want a lovely soft rug underfoot. We live in an old house that can be quite cold in the depths of winter and I think it gives the whole space a more luxurious touch. Not sure how effective those wheels are going to be on the desk chair but sometimes aesthetic outweighs practicality for me! I could always get a clear mat beneath the desk if I have to (although I’m resisting that option at the moment!).

Currently, I’m in prep mode, boxing things up, selling the furniture and getting everything in this room cleared for the electricians’ arrival on Monday (we’re also updating the electrics in Wayne’s office at the same time) so things will get really messy/dusty for a while as they’ll be putting channels in the walls for wall lights and repositioning the overhead light and sockets. I am hoping this won’t take too long however as once that’s done, we can skim/patch/prime the walls, paint and then the new carpet can be laid and the furniture can go in. It’s fairly (she hopes!) straightforward once the electrics are done so fingers crossed this won’t take ages to complete!

Are you excited about the changes to come? Have you worked on any office projects yourself recently? Do let me know what you think of the plans in the comments!