Renovation Diaries: We’re Nearly There and Kitchen Units are In!

So I feel like a lot has happened since my last renovation update even though we really only laid the flooring a couple of weeks ago but at this point, it might as well been a year ago because of everything that’s happened since that point. Right now, as I write this post, the kitchen is very close to completion with just a few weeks before we’ll be able to finally use it and enjoy it. 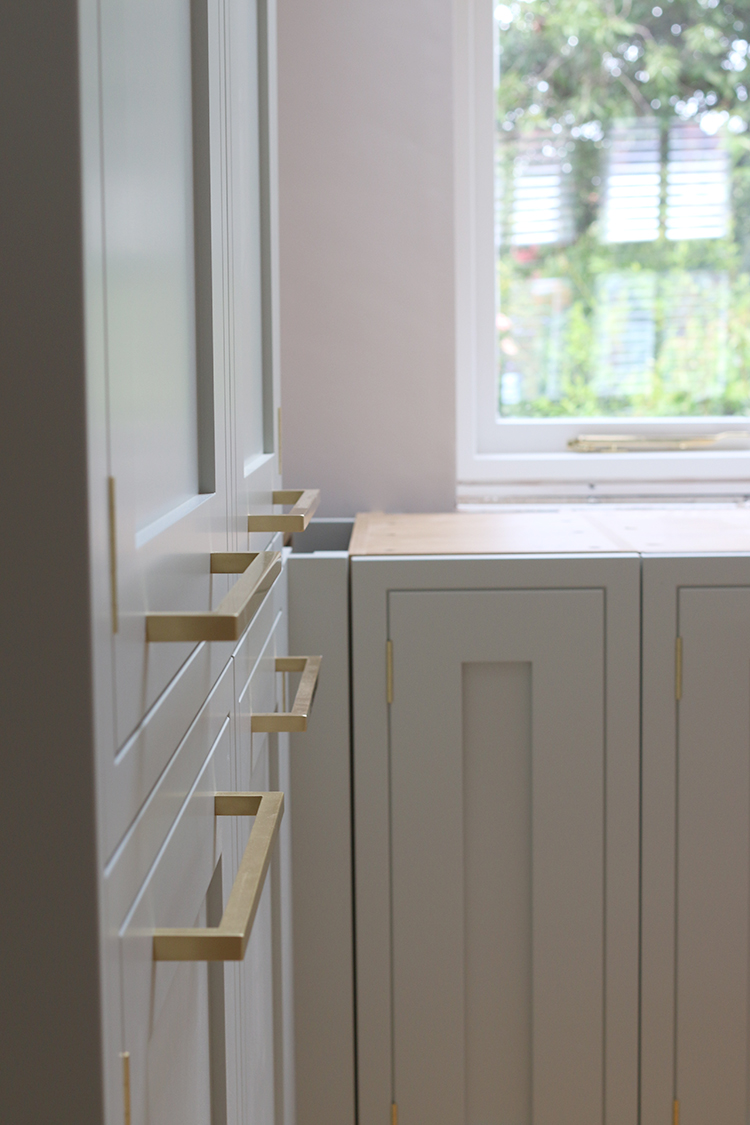 My next post on the kitchen may possibly be the full reveal*. I do have lighting being installed this week and some plumbing work the following but once the worktops, backsplash and shelving are installed (in around 10 days’ time), then everything else that follows is just dotting the i’s and crossing the t’s – installing the tap, finishing off the electrics and finally moving all our stuff from our old kitchen into the new one and styling it up! So exciting!!

*Saying that… we have been working on tiling and updating the fireplace so I might squeeze in a little post around that one if I get the chance!

Anyway, I’ve been sharing a lot of behind-the-scenes on my Instagram so if you haven’t had a look at that, be sure to click on the ‘KITCHEN’ highlight in my stories for all the details! 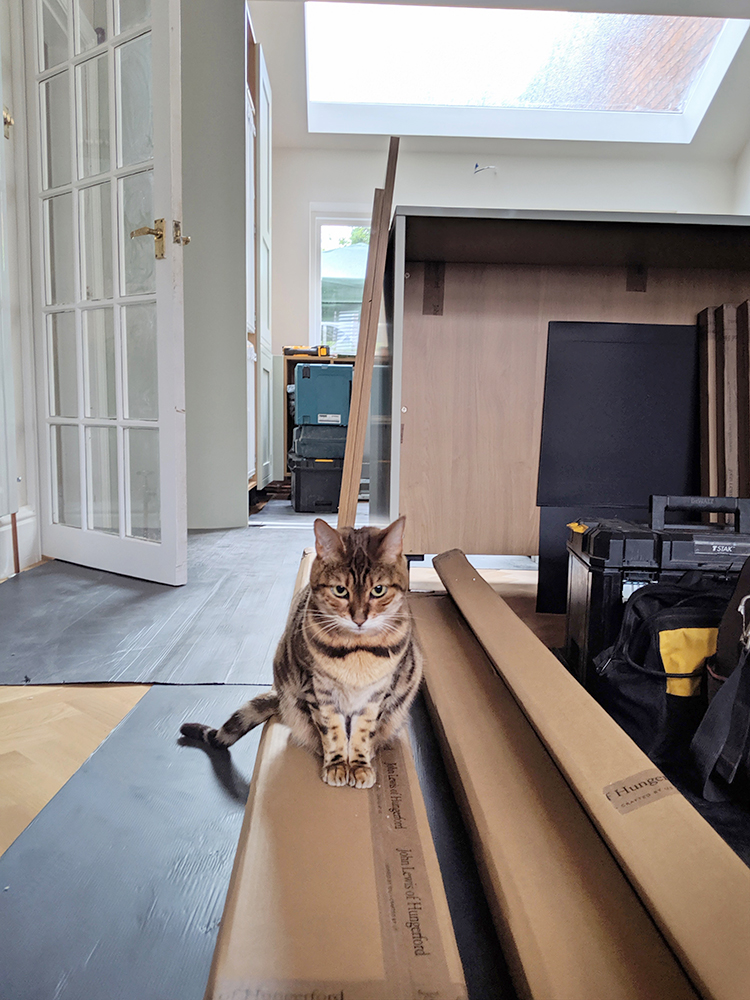 (I’ll warn you now, there’s a lot of Meisha. She really needs to involve herself in every step of every single thing as you probably are already aware.)

However, for those of you who haven’t been following along there, then my post will catch you up on what’s been happening. We literally finished the parquet flooring about 3 days before the kitchen delivery and I had some last-minute paint touchups in the day or two before so we knew we were working to a deadline to ensure the entire space was fully prepared for the kitchen installation. 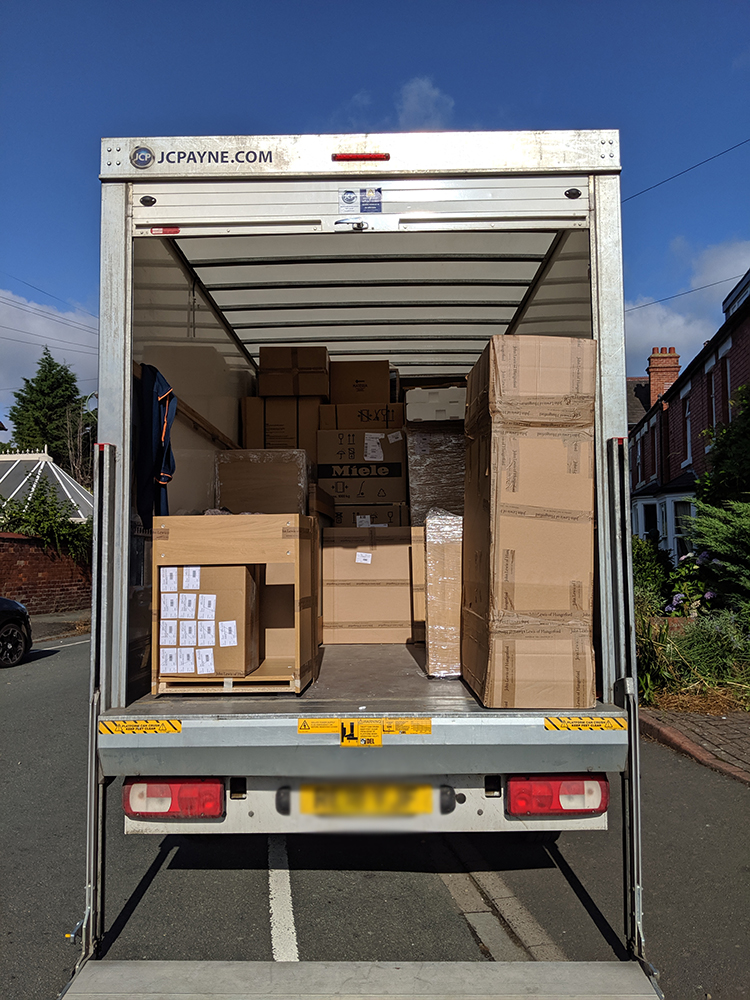 All the units and appliances from John Lewis of Hungerford arrived on the back of a lorry on the 7th August and two guys made quick work of offloading everything. 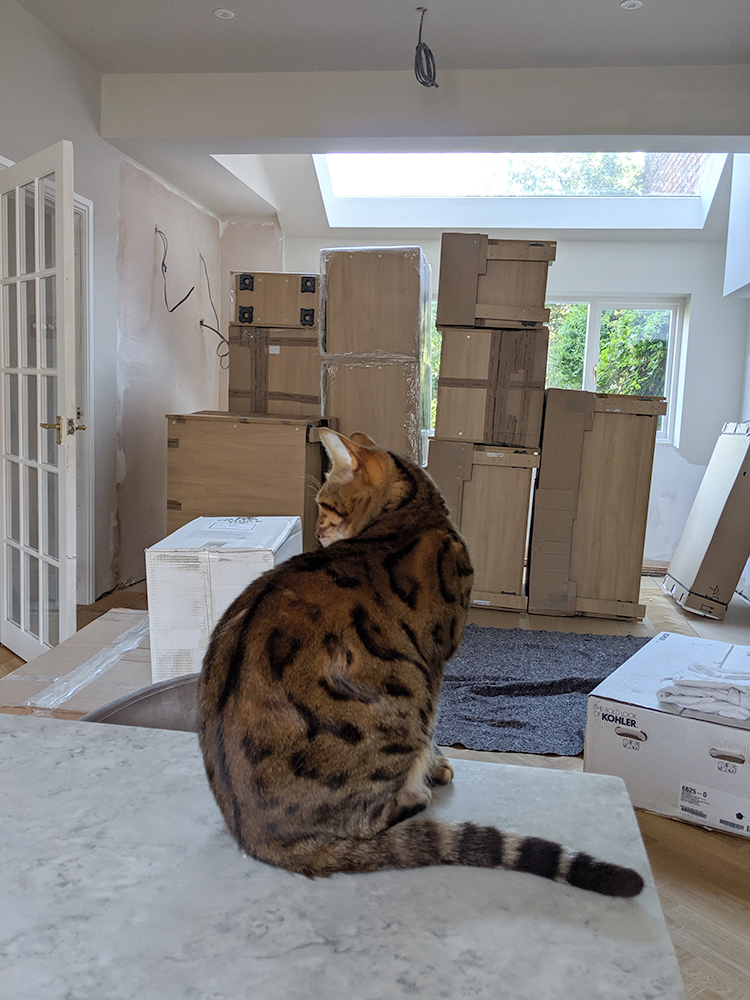 Meisha had to supervise as they offloaded. Let me tell you – there was a ridiculous amount of boxes which took over the entire kitchen area! The picture above shows just the start but that space ended up totally full! 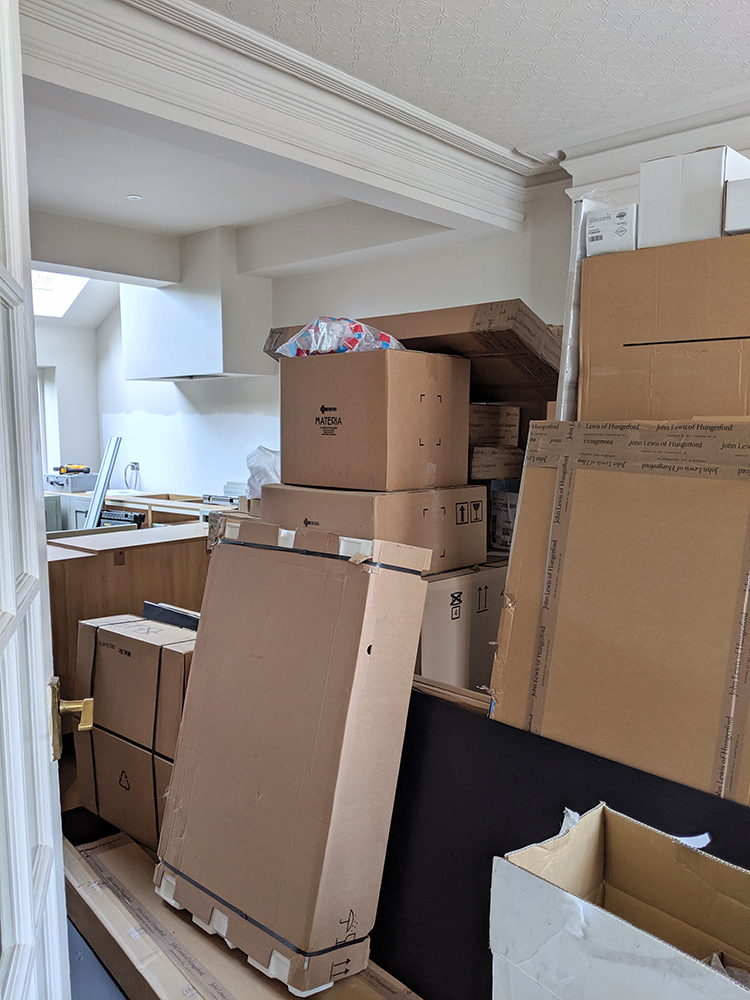 Thankfully, we didn’t have to unpack or sort any of that. Aaron, John Lewis of Hungerford’s expert kitchen installer actually spent the entire week – from the 12th August until 16th August – unpacking, assembling and fitting the entire kitchen. 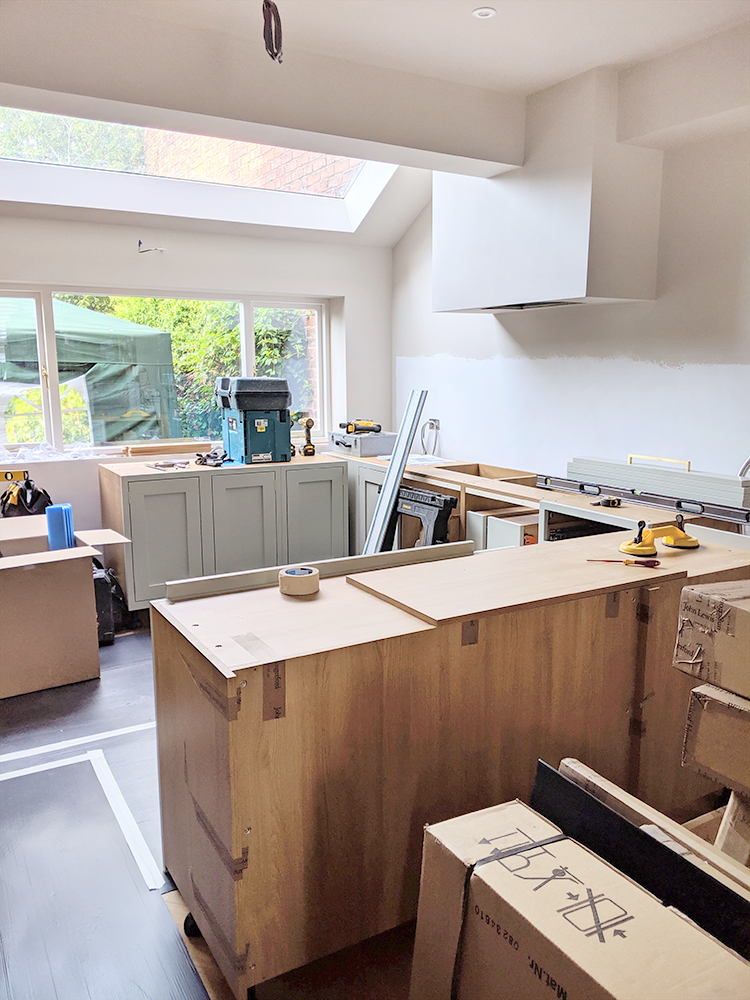 t took every ounce of my willpower not to be checking in on him every 20 minutes because I couldn’t contain my excitement at seeing it all finally come together. I mean, it’s one thing choosing finishes from little swatches and looking at a computer render – it’s entirely another seeing the whole thing take shape in the flesh. 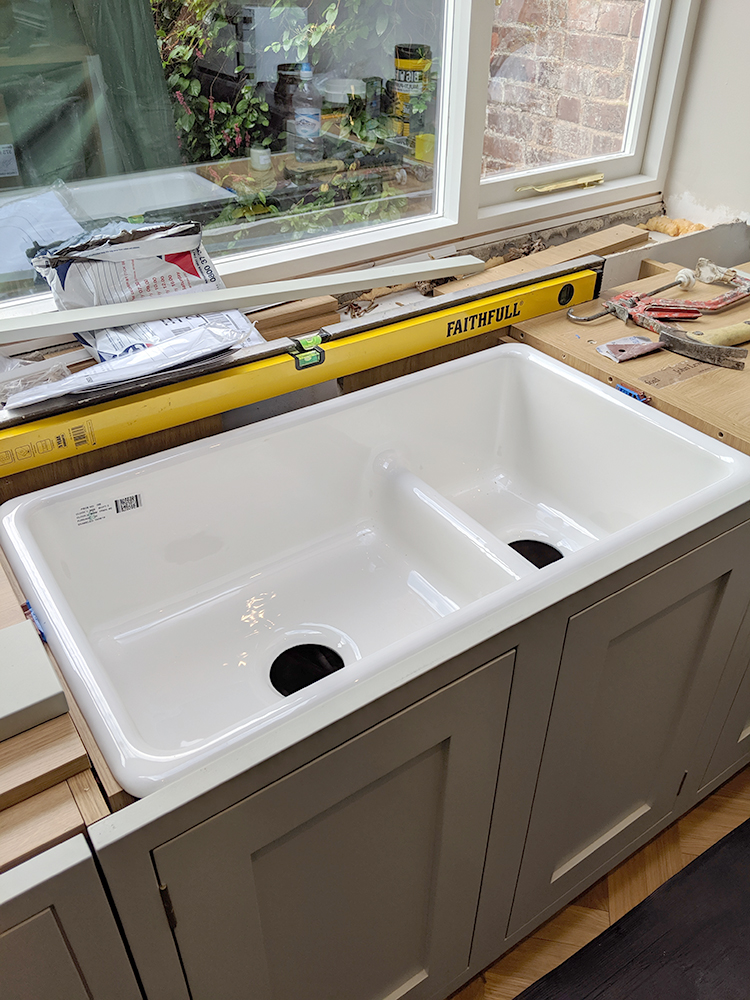 By the end of the week, we were left with the start of a gorgeous space. I genuinely couldn’t be more thrilled with how it’s all coming together and I know I have called it my ‘dream kitchen’ before but it hardly feels real that this is going to be a space that’s actually ours. It really feels like complete fantasy especially after living with a kitchen for the last year and a bit that I actually despise. 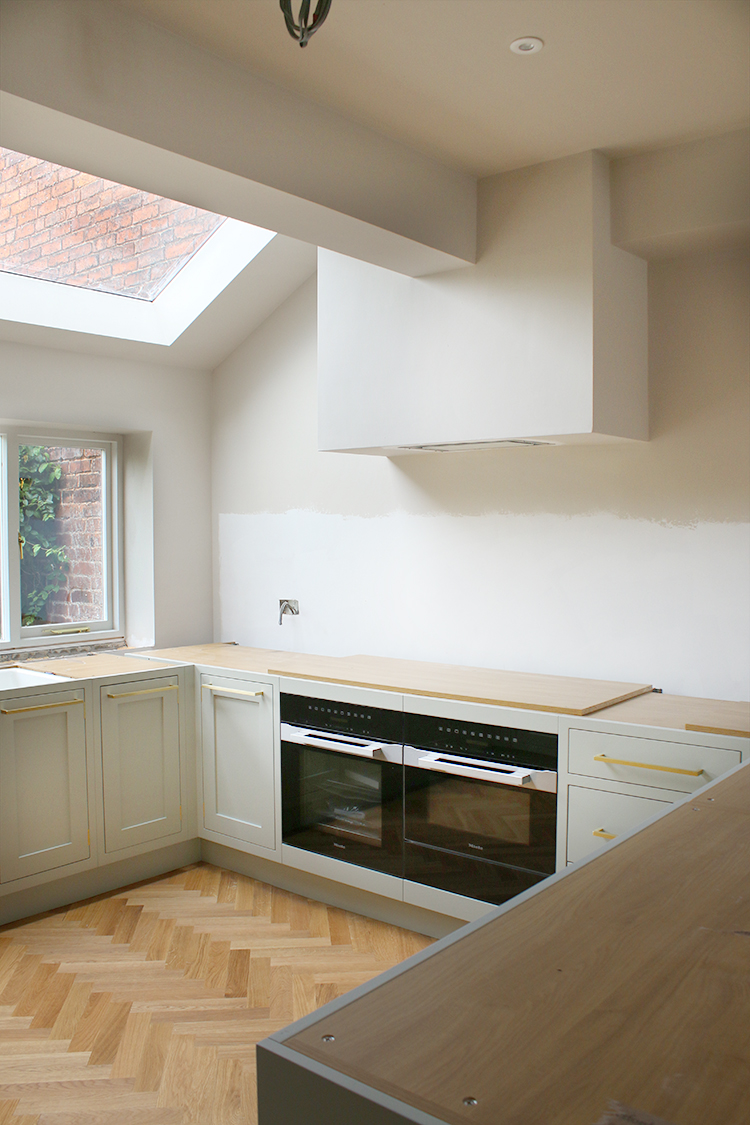 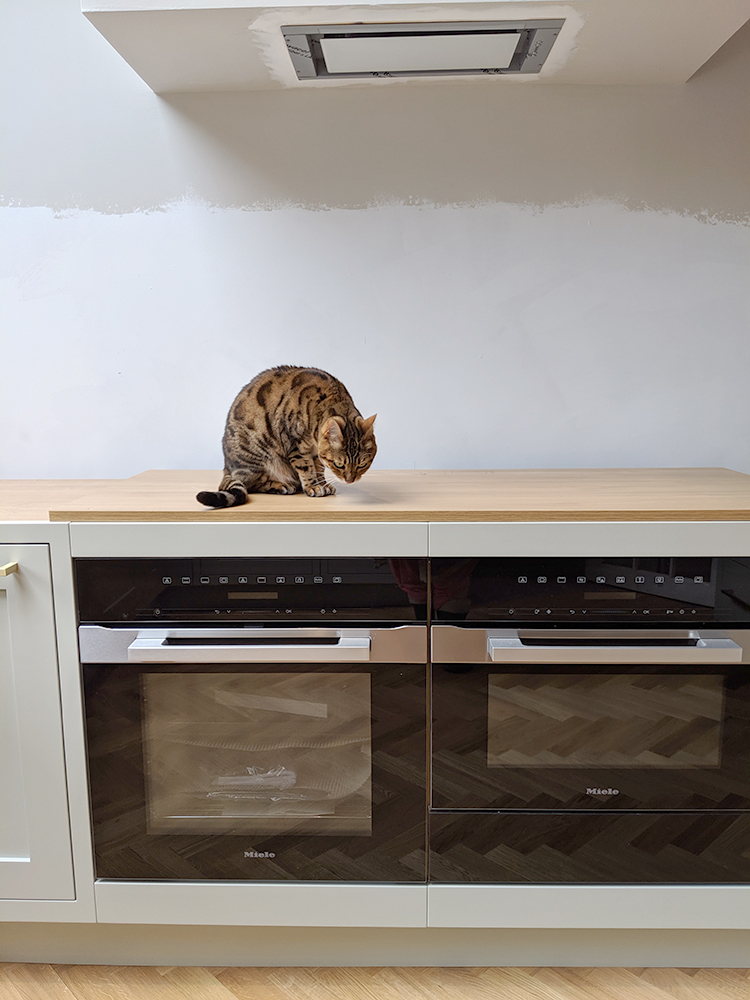 I’m so happy with the colour of the units – that soft greeny-grey just sings in the light and I don’t for one hot second regret going with this colour (which John Lewis of Hungerford colour-matched to Farrow & Ball’s Mizzle by the way). 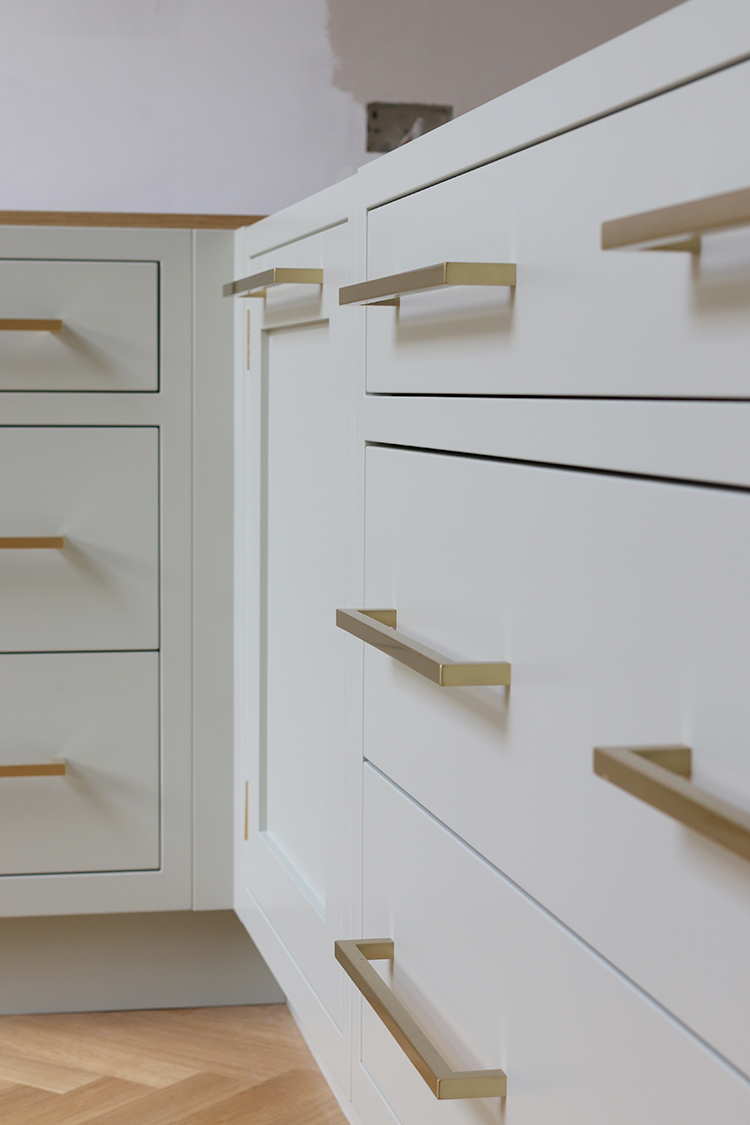 I love the brushed brass handles as well against the colour and the softness of Earthborn’s Donkey Ride claypaint on the walls and ceilings just gives everything a warm glow. The flooring, of course, provides the perfect finishing touch. It’s just coming together even better than I’d imagined.

Here are a few more shots of the in-progress kitchen! 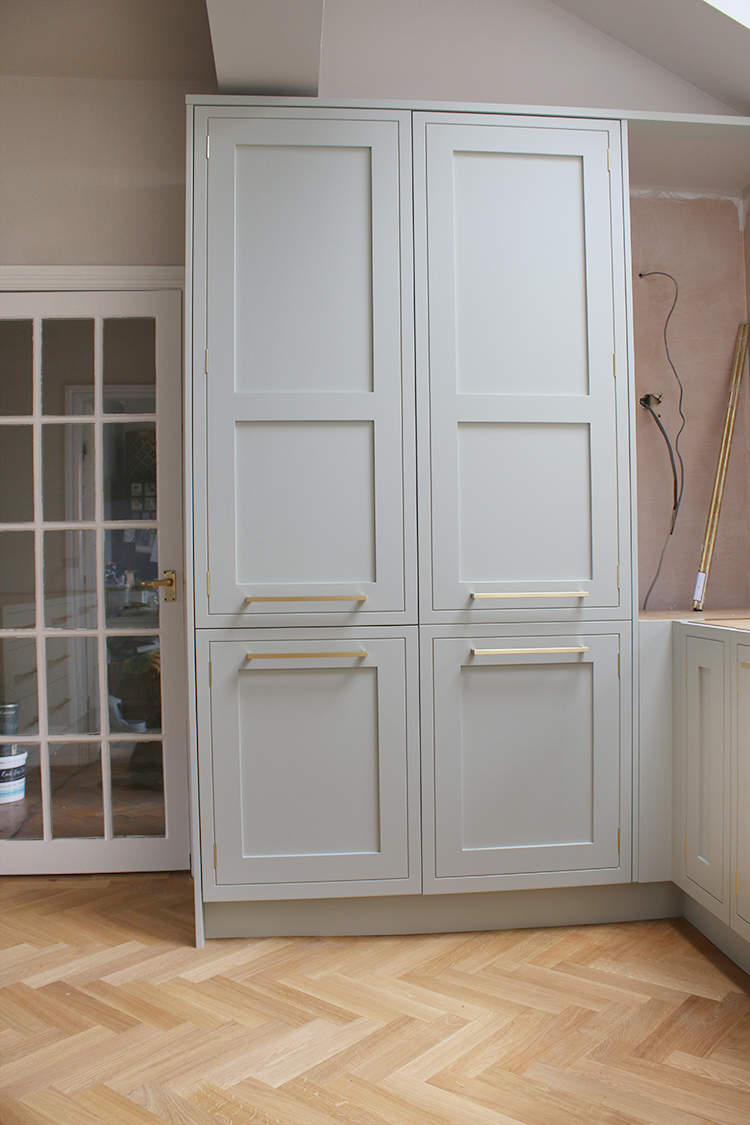 What you see above actually hides a fridge freezer (on the left) and a larder (aka pantry) on the right. As you can see, we are still waiting on the worktop larder in the above shot. Essentially there will be another panel just like the others but because it sits on the worktop, that needs to be installed before the little pantry is installed on top of it. 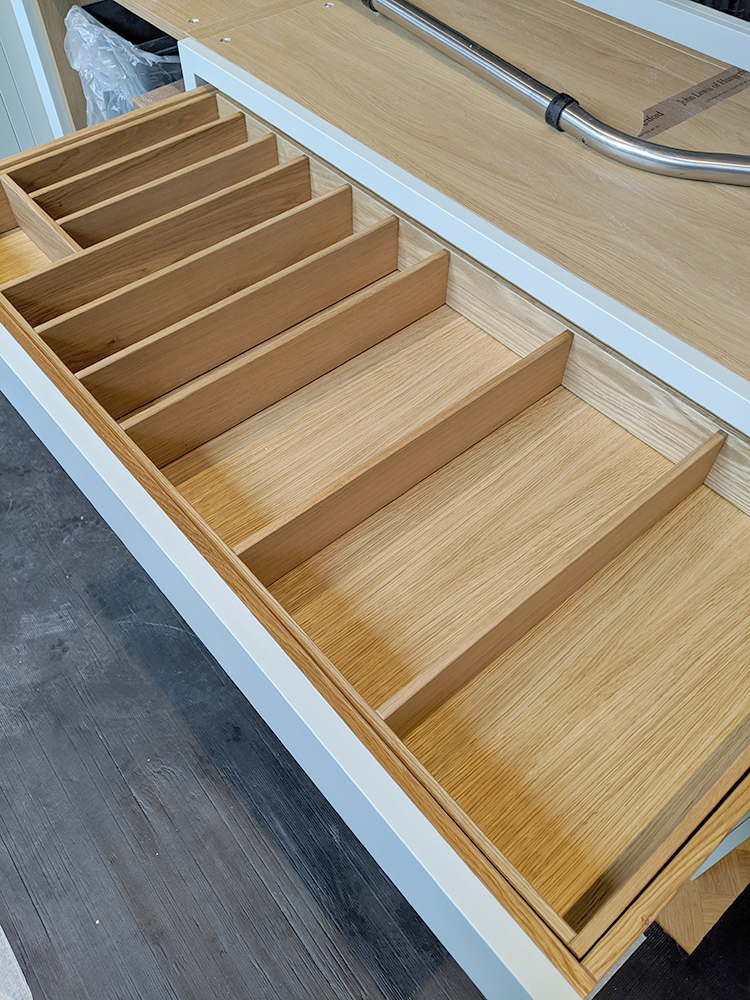 I’ve been so impressed with the quality of everything too with oak being used throughout including dovetail joints in the drawers! Side note – I definitely do not have enough cutlery and utensils to fill that drawer! Ha! 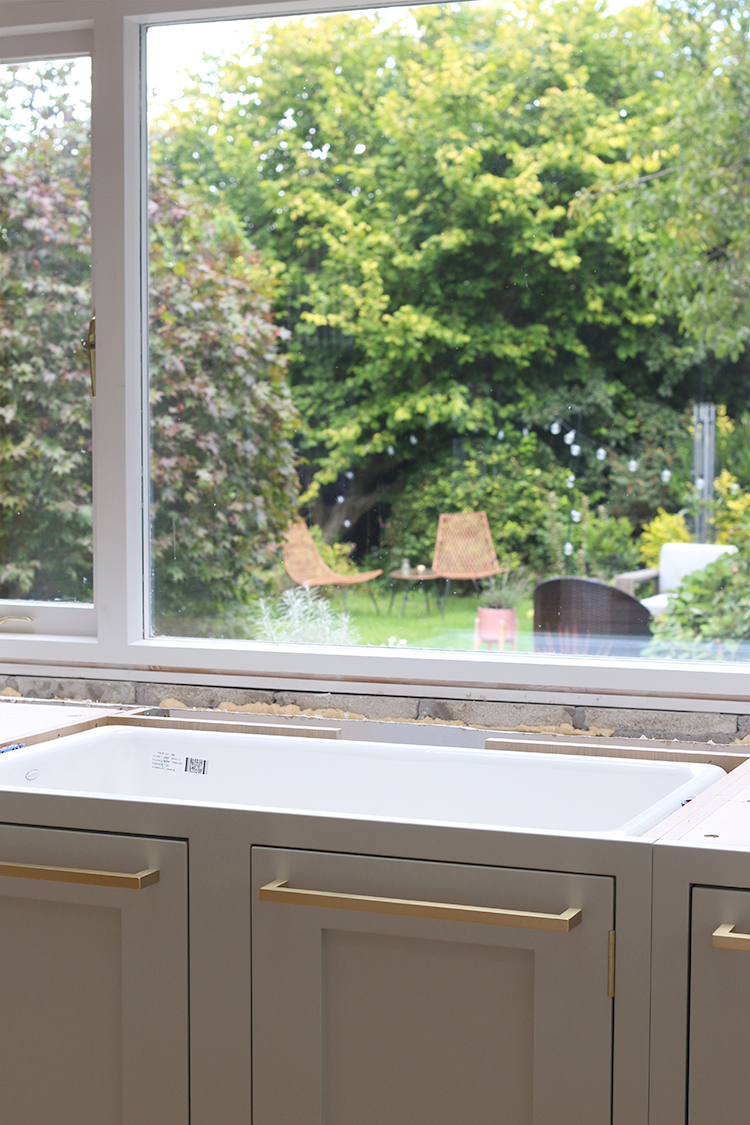 My beautiful Koehler sink has also been installed and once the worktop is installed, this whole area will make a lot more sense! Basically, the worktop will run into the window to create a seamless look. 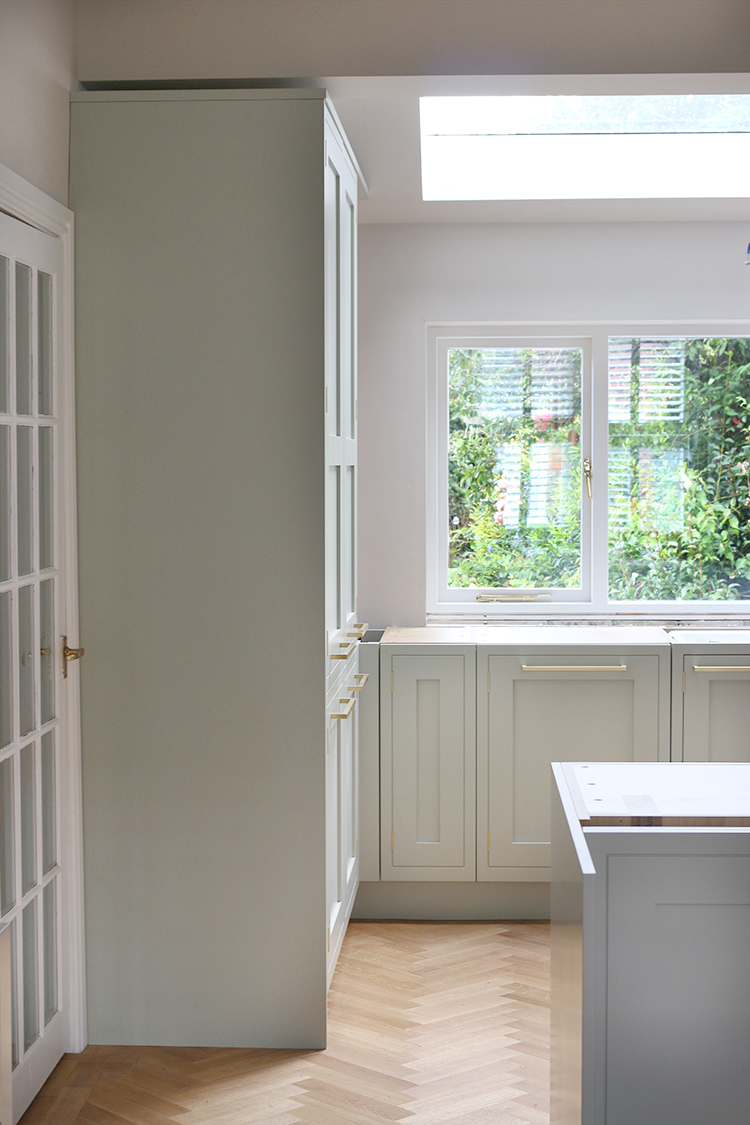 So the next couple of weeks should be pretty exciting. Lighting goes in this Thursday, then I’ve got my plumber here to hook up the dishwasher and set up for the tap installation next Wednesday then all going well, worktops, backsplash and shelving goes in on Thursday and then the tap is installed on Friday.

The following week, our kitchen installer, Aaron, is back again for the final fittings (worktop larder, kitchen handle, a internal corner shelving mechanism etc), then the plumber is back to hook up the gas hob and then we’ll have the electrician back one last time to do the plug sockets in the back splash. And then WHEW we are done!

I’d encourage you to follow me on Instagram because I’ve been sharing pretty much all the details of every step of this as it happens. In the meantime, who’s excited? What do you think of the look so far?

The kitchen is part of a collaboration with John Lewis of Hungerford and there are other sponsors that have gifted or discounted items used in our kitchen remodel. This post is independant of those agreements – I just wanted to share the progress!