Should You Paint Above The Picture Rail?

Long long ago, back in 2012, I made a massive discovery and decided to share it on my blog after I’d revisited painting my Edwardian Home’s living room. This living room had a picture rail – ya know, the bit of moulding that goes around the entire room about a foot (more or less) below where the coving meets the ceiling. In years gone by (and probably still now), people used these to hang pictures from (thus the name) so they weren’t having to put nails into their walls. 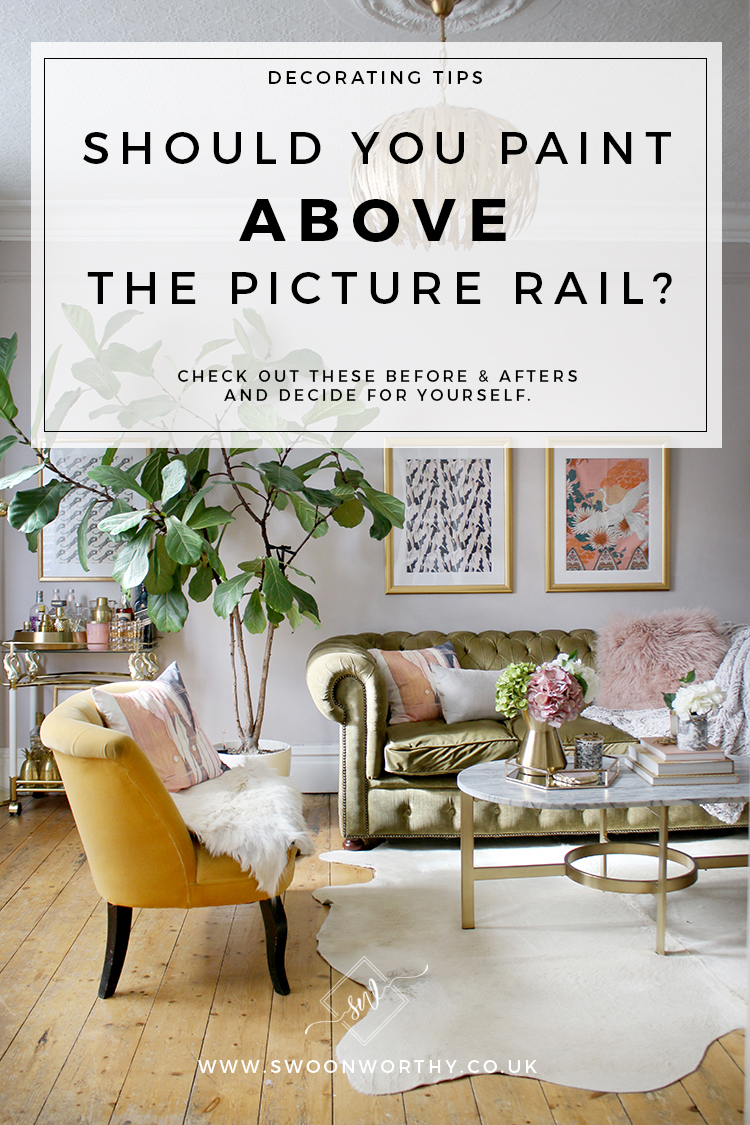 This is quite a desirable feature for a lot of period houses. You’ll see picture rails used in Victorian, Edwardian, 1920s and 1930s houses – it’s pretty common. And when I’d moved into my home back in 2010, I noticed that the previous owners had only painted up to the picture rail and then above that point, it was painted white along with the ceiling. I’d seen so many people do this in their own homes, I just assumed that was the ‘done thing’ and repeated it in my living room. 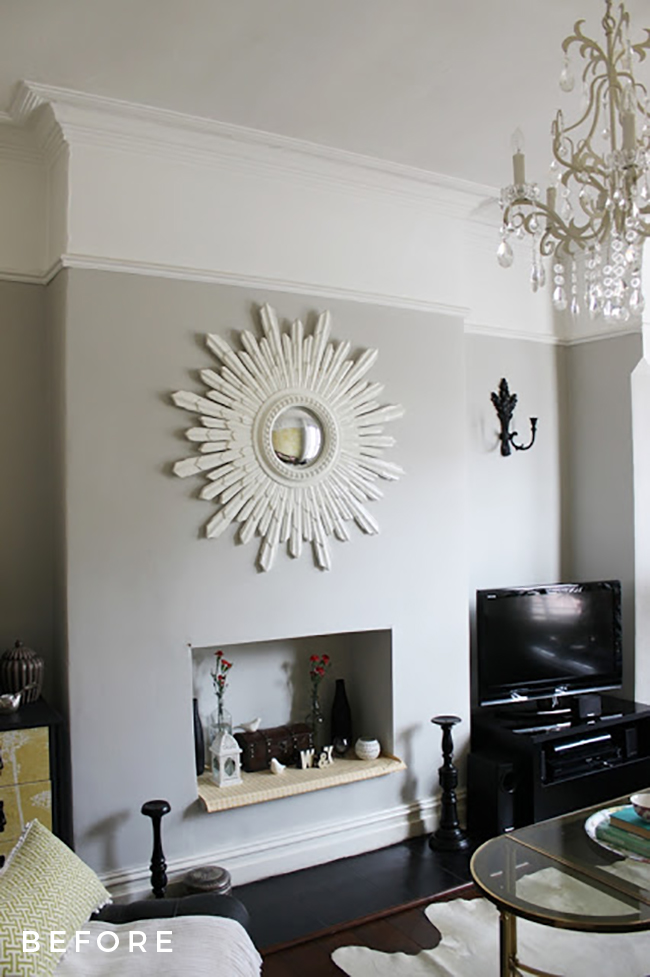 It bothered me though. Despite the fact I’d used a pale grey colour (Dulux Dusted Moss 2 for those wondering), my lovely high ceilings didn’t look all that high. I decided, after painting my bedroom, that I would revisit the painting in this room and so I painted above the picture rail to see if it made a difference. It did. In fact, I was shocked by how much taller my ceilings looked. 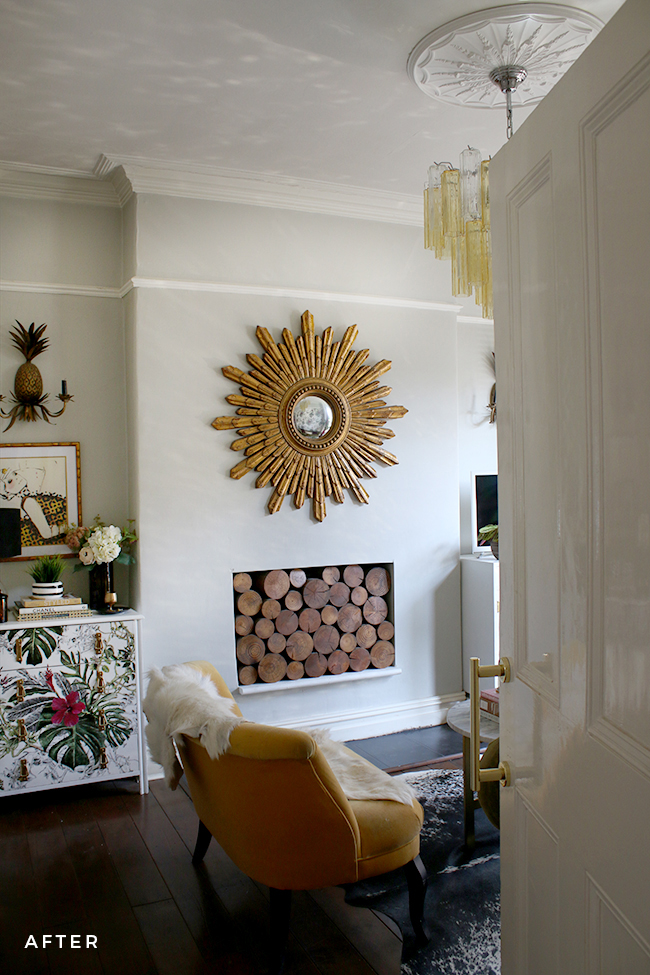 I shared my findings on the blog. Crazy thing? That one post has remained one of my most popular posts of all time. More than 50,000 views on that post alone and it hasn’t ever slowed down. Now, the first shot was taken in 2010 and the second was taken in 2017 so yes, of course, there’s a difference in the decor. But hopefully, you can see that such a subtle change in the paint colour above that picture rail has made the ceilings look higher. Were I to do it again, I’d have painted the picture rail out in the same colour as the walls rather than leaving it white. Live and learn though.

But why is that post so popular? Clearly a lot of people Google this question and for good reason. Yes, it’s the done thing but why? Why is it the done thing? I’m American and so it was something I’d never come across before in US homes and despite having lived in the UK for 18 years and despite seeing it done over and over and over again, from normal common folk to experienced interior designers, I still am not really sure. Whatever the reason, it seems a lot of people are questioning this too and thus the reason that blog post continues to get so much traffic. I figured 7 years later, it was time I revisited this subject. 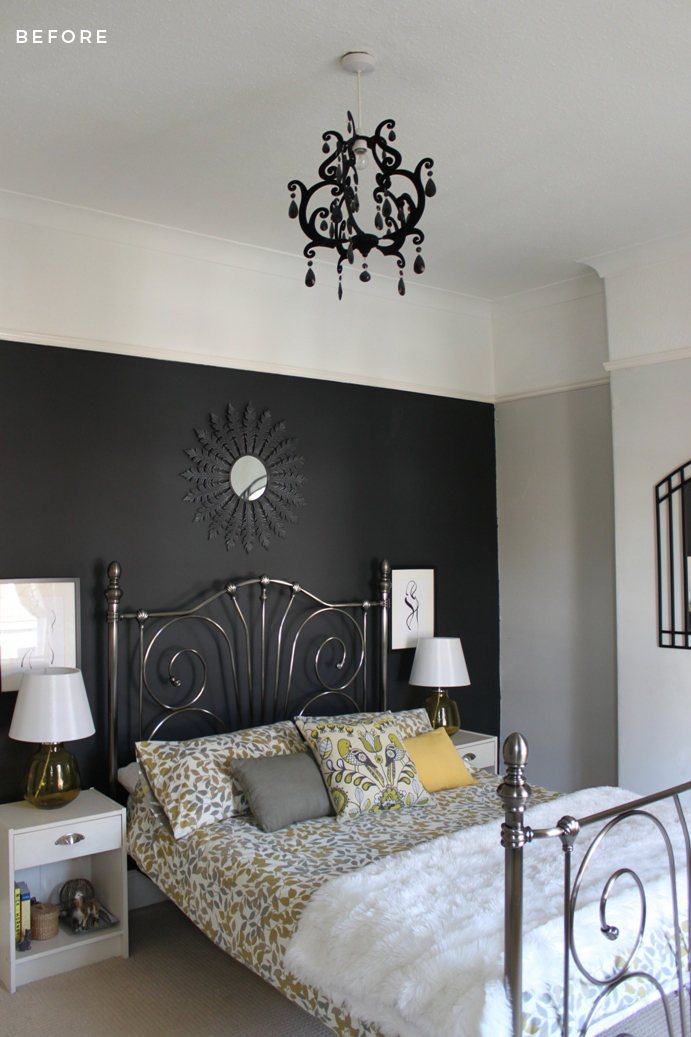 Since that fateful trial run, I’ve done it again over and over. Every single room I’ve ever had with a picture rail, I’d take the wall colour and go right up to the coving. I did it again in my bedroom in that house, painting the rail the same colour as the walls (this time in Dulux Night Jewels 1, a nearly-black slate grey) and it made a massive difference to the whole feel of the room. 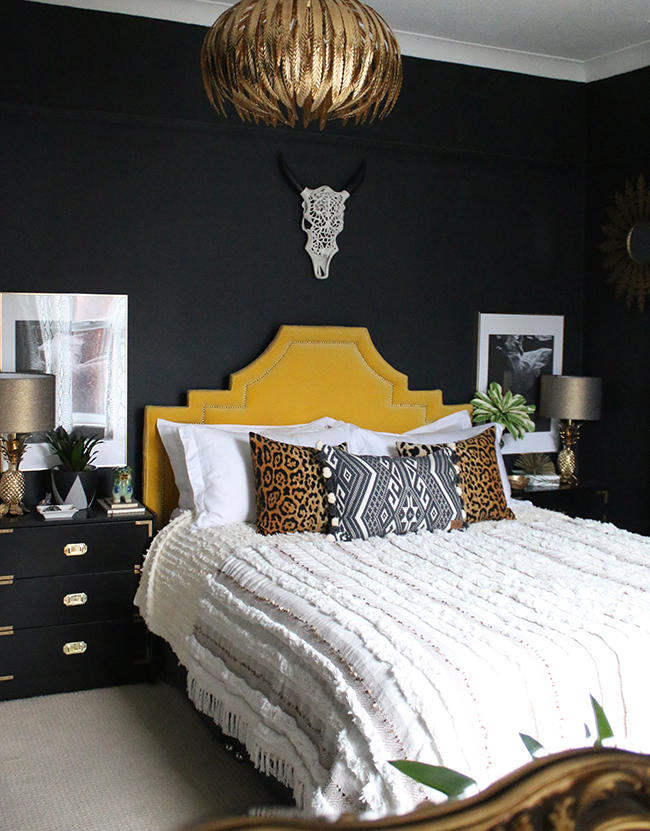 I did it again in my old home office. 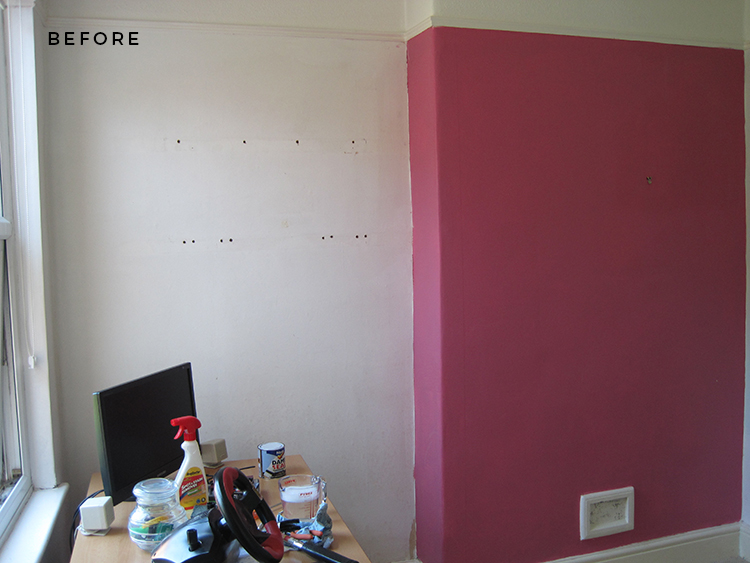 The ‘before’ shot was the only one I could find from when we’d first moved into the house in 2010 so apologies it’s not that great but you can see the difference it made, taking that colour all the way to the ceiling. I even (shock horror) removed the picture rail along the chimney breast and wallpapered right up to the ceiling. Big difference. 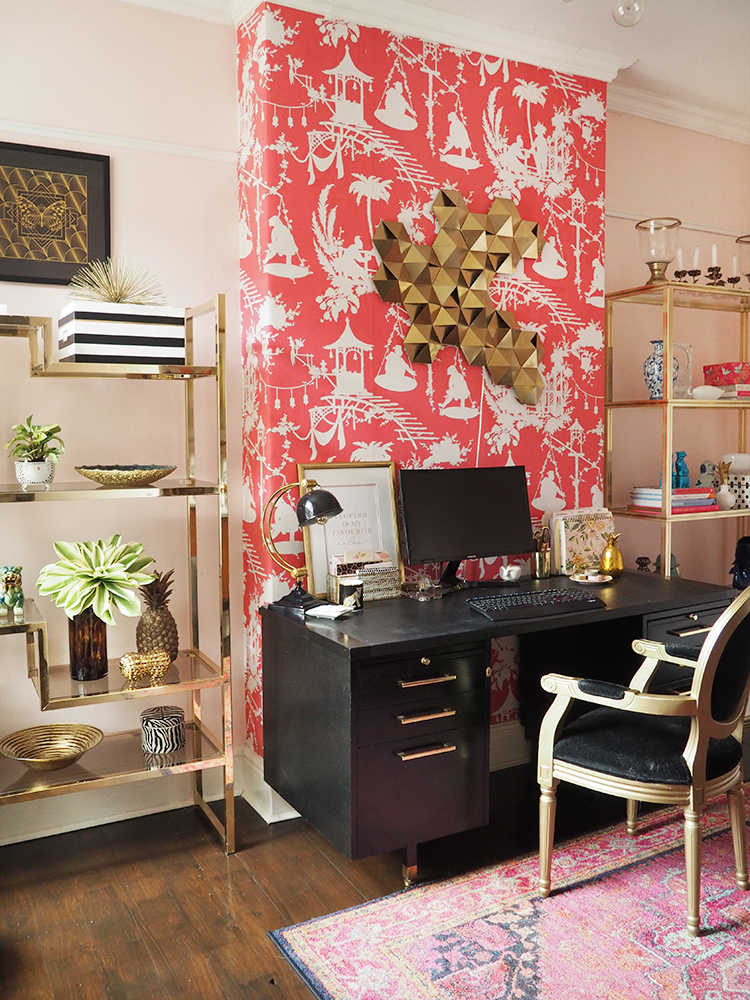 As a side note, because I know I’ll be asked: what about wallpaper? Should you wallpaper above the picture rail? I’d say, in most cases, yes, you should. Paint out the picture rail (first, before you hang the wallpaper) in the same background colour as the wallpaper if you want it to blend in or be a bit adventurous and take an accent colour from the wallpaper and use that instead for your picture rail. But yes, you’ll have the same effect of the walls being taller and thus your ceilings looking higher.

When we moved into our current home, I noticed once more that the previous owners had taken that dark berry colour in the living room only up to the picture rail, leaving the wall above the picture rail white along with the ceiling. It seriously annoyed me. As in, every time I looked at it, I felt agitated. The dark colour made the room look squat. We have nice high ceilings in this house – why did the ceiling feel so low? It was the ‘picture rail effect’ once again. 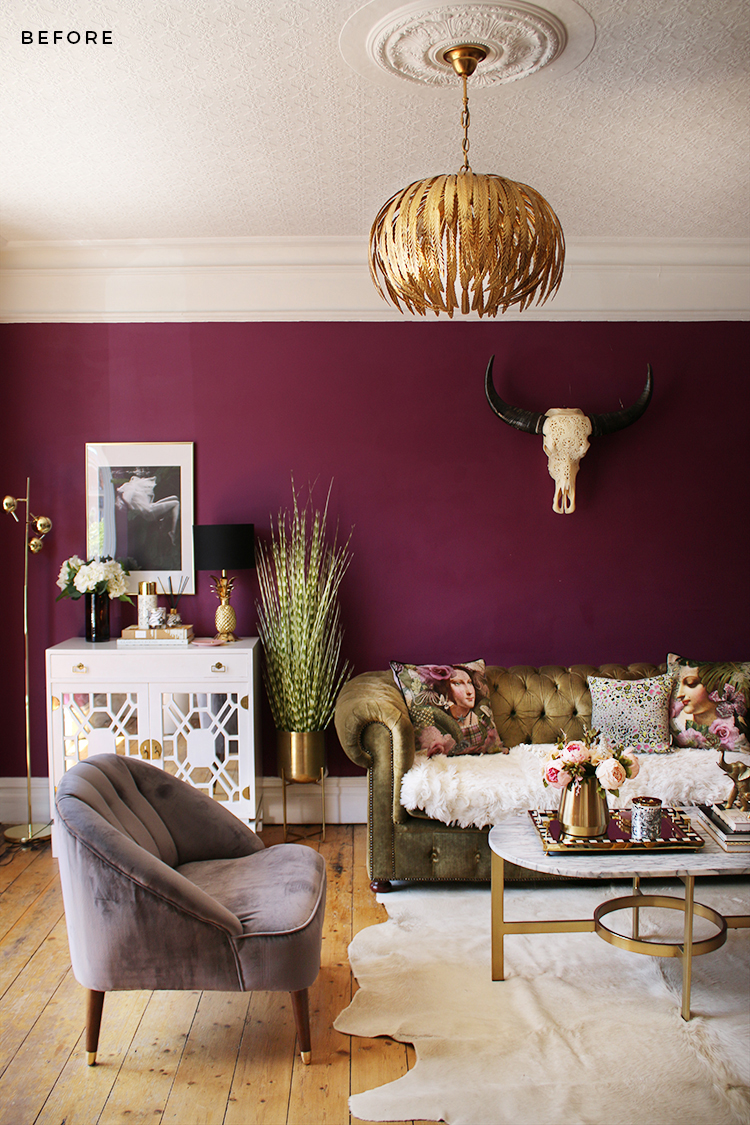 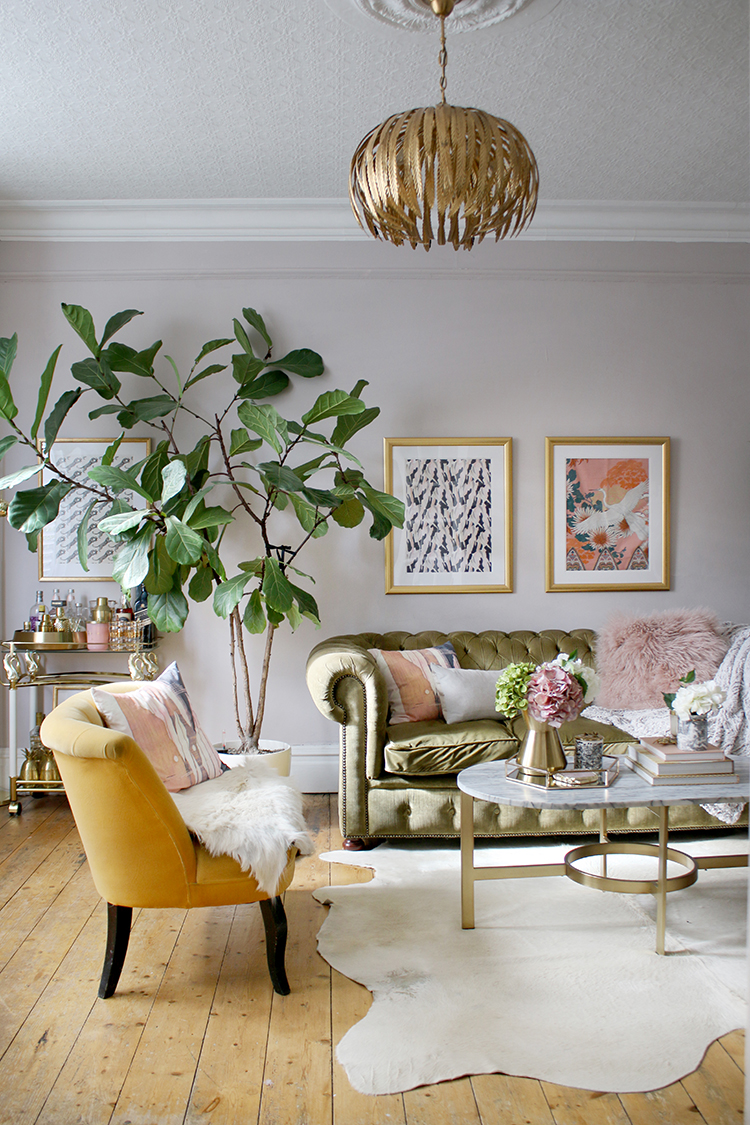 Of course, when I decided to repaint my living room recently, I completely painted out the picture rail in the same colour as the walls and took it right up to the cornice. Such a huge difference. Yes, I’d gone from a darker colour to a lighter one, but the results are undeniable. It felt like the ceiling had lifted and those lovely tall ceilings had a chance to finally shine and in this room, we’re only talking maybe 8 or so inches. 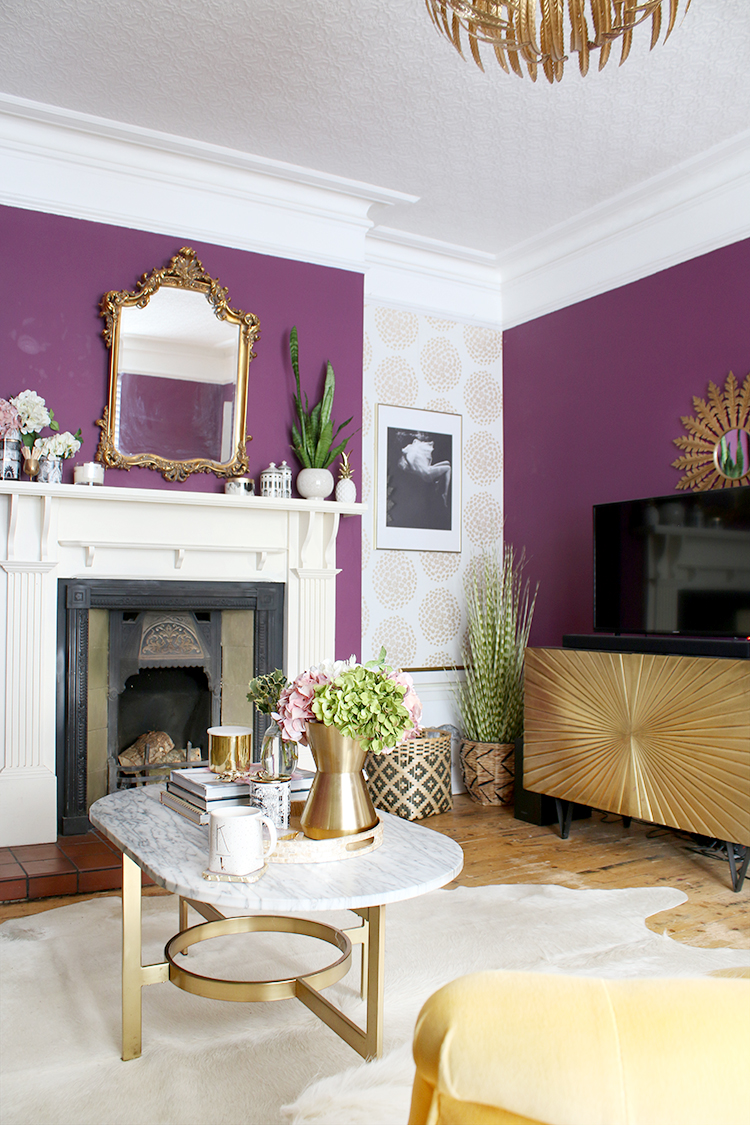 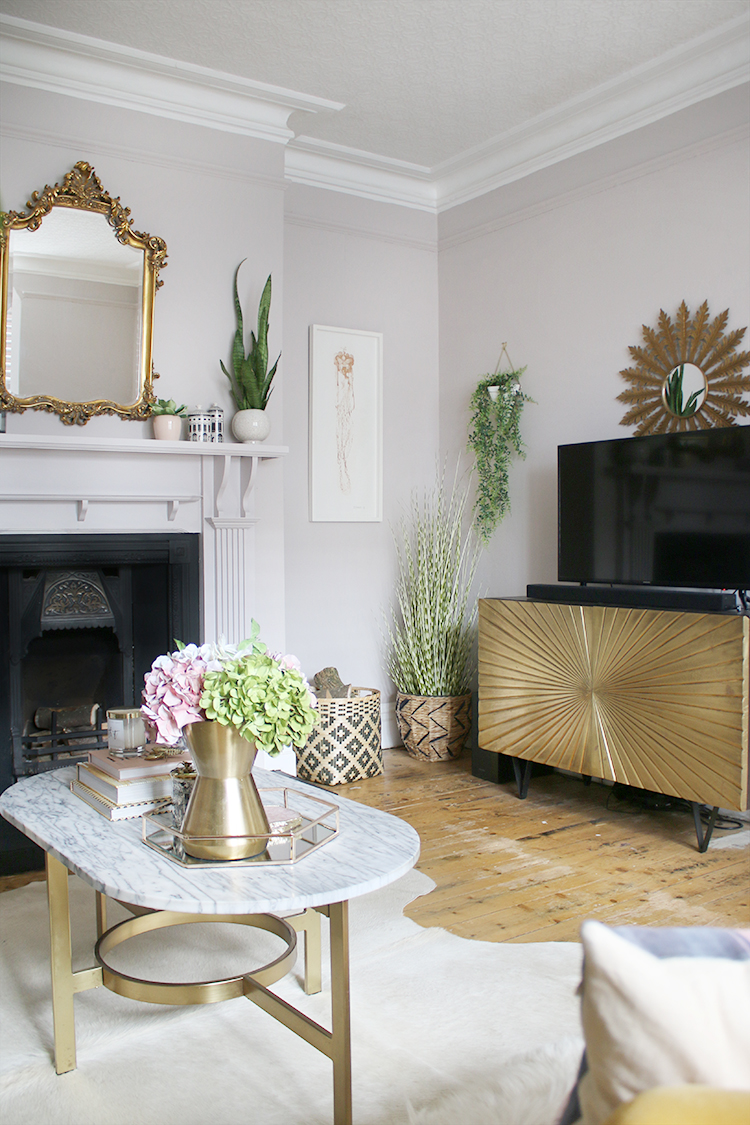 I feel like I’m on a one-woman mission to get people to paint above their picture rails. Currently, there’s a burgeoning trend for painting your ceilings in a different colour other than white and to that I say, fabulous! Do it! Try something new! Or, paint everything in the same colour – from your walls to your ceiling as well as your picture rails, coving etc. for a total wrapped-up-in-colour effect. But if your ceiling is a different colour to your walls, then no, don’t take that ceiling colour all the way down to meet the picture rail unless you want your walls to seem shorter. Now, as someone who loves a soaring high ceiling, I’m not sure why you would want to but let’s say your walls are 14 feet high and you want to create a bit more cosiness? Okay, knock yourself out. But otherwise, I implore you, don’t do it.

And just in case you want to see the side by side difference, I present you with my own findings…

So now, over to you guys. I’m sure someone will pipe up and say it does make your ceilings look higher or the room brighter or something but nope, I don’t buy it. I’ve done it in multiple rooms and every single time my walls look taller and thus, the ceilings look higher and the room bigger, no matter whether it’s a light or dark colour. But maybe someone can explain this strange trend here in the UK to me? And if not, after seeing these pics, would you consider taking your paint colour all the way to the ceiling next time? Let me know what you think! I’m intrigued to hear from all sides of this one!