So the last three weeks since I posted about our renovation feels like it’s flown by. We are nearly at the stage now where we have what appears to be an ACTUAL SPACE. The walls went up as quickly as they came down, the roof light and window installed, new subfloors created, first fix for electrics and plumbing happened and we’re actually at the stage where we’re plastering!

Now if you haven’t been following along with the progress of this space, I’d encourage you to have a look at my first renovation diaries post here which talks through what the plans are and how the space has changed since we moved in. It’ll also show you where we started from as this space was originally part utility room, part tiny murder-y bathroom and part garden!

I’ll also apologise for the picture quality of a lot of these – most of them were quickly snapped on my phone! 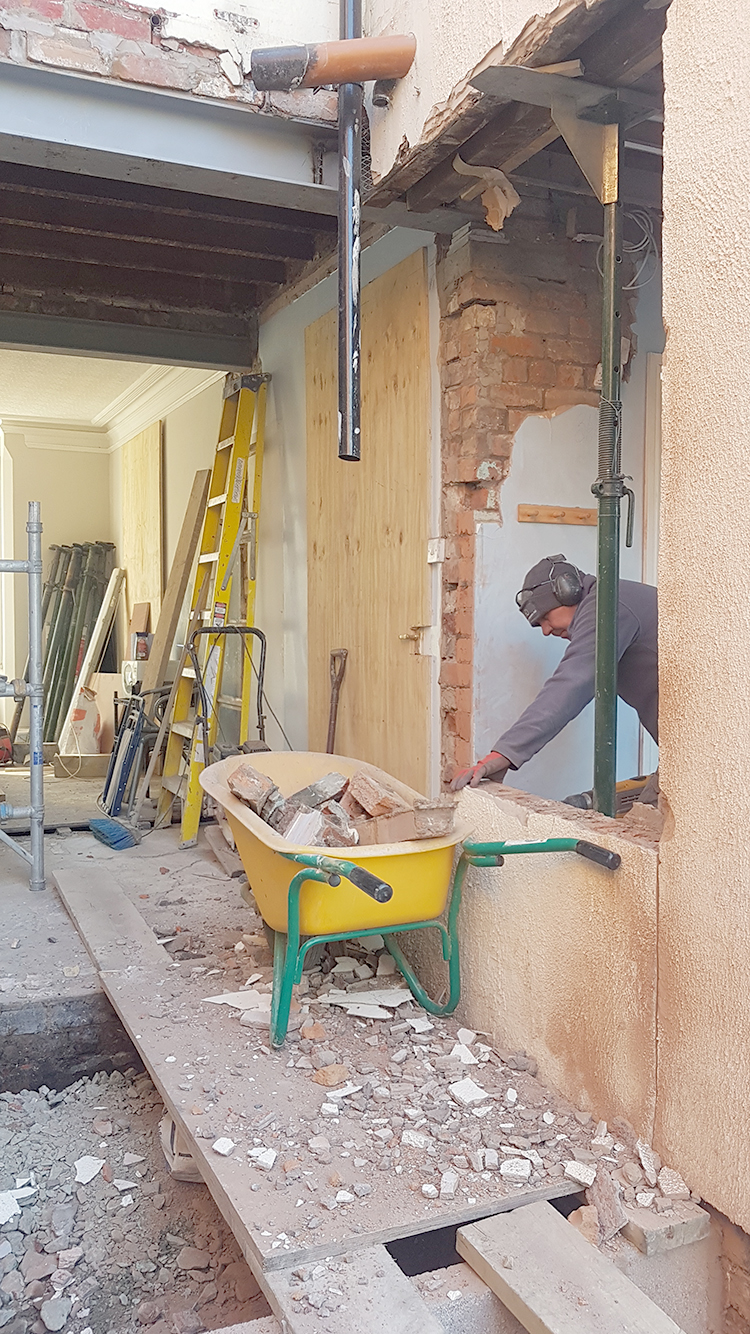 The last I shared there was a huge hole in the back of my house and the destruction continued as they removed the wall of the mudroom (seen above in the early stages) to rebuild it about 30-40cm back, making the mudroom slightly smaller but gaining some valuable space in what will be the future kitchen and creating a straight seamless wall across the length of the room. 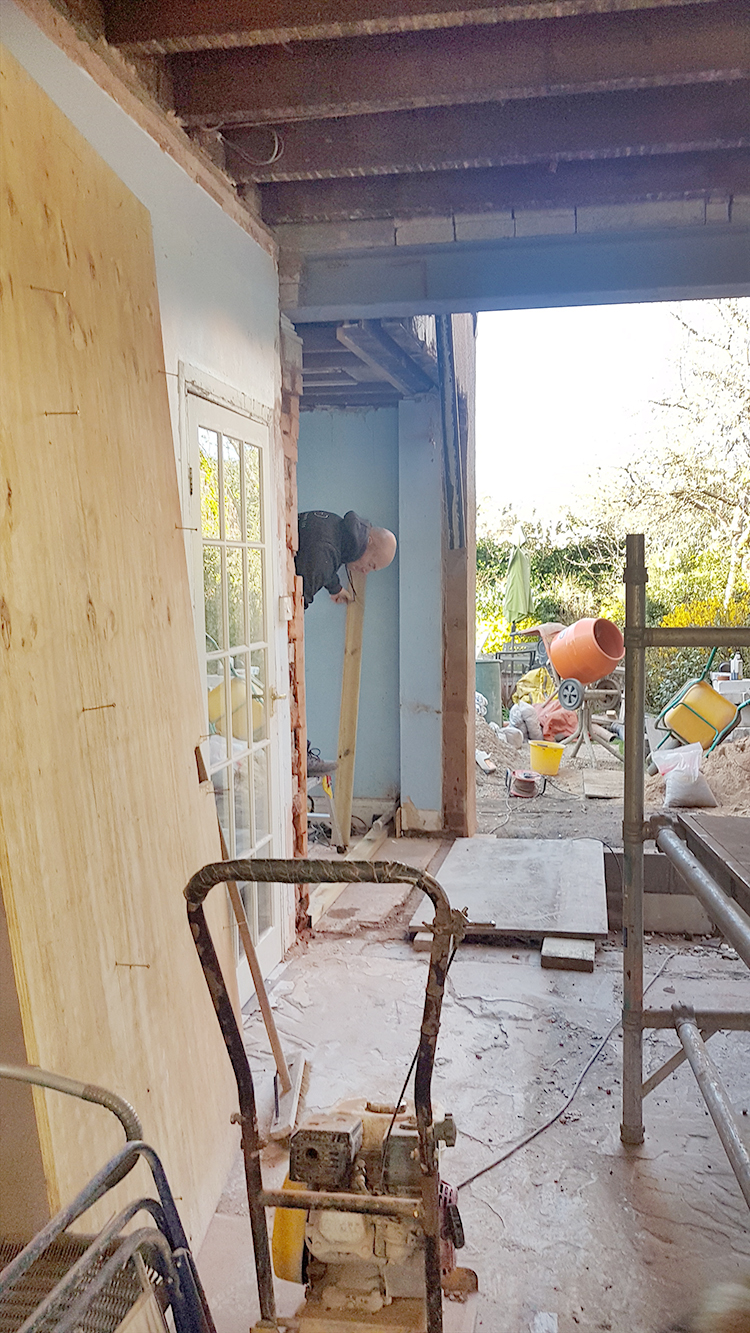 There was originally going to be a steel beam put into this space but as things often go on an old house, an existing steel beam was uncovered there already which saved us a few pennies and they were able to just bust out the wall and rebuild it within a couple of days. My bank balance celebrated. 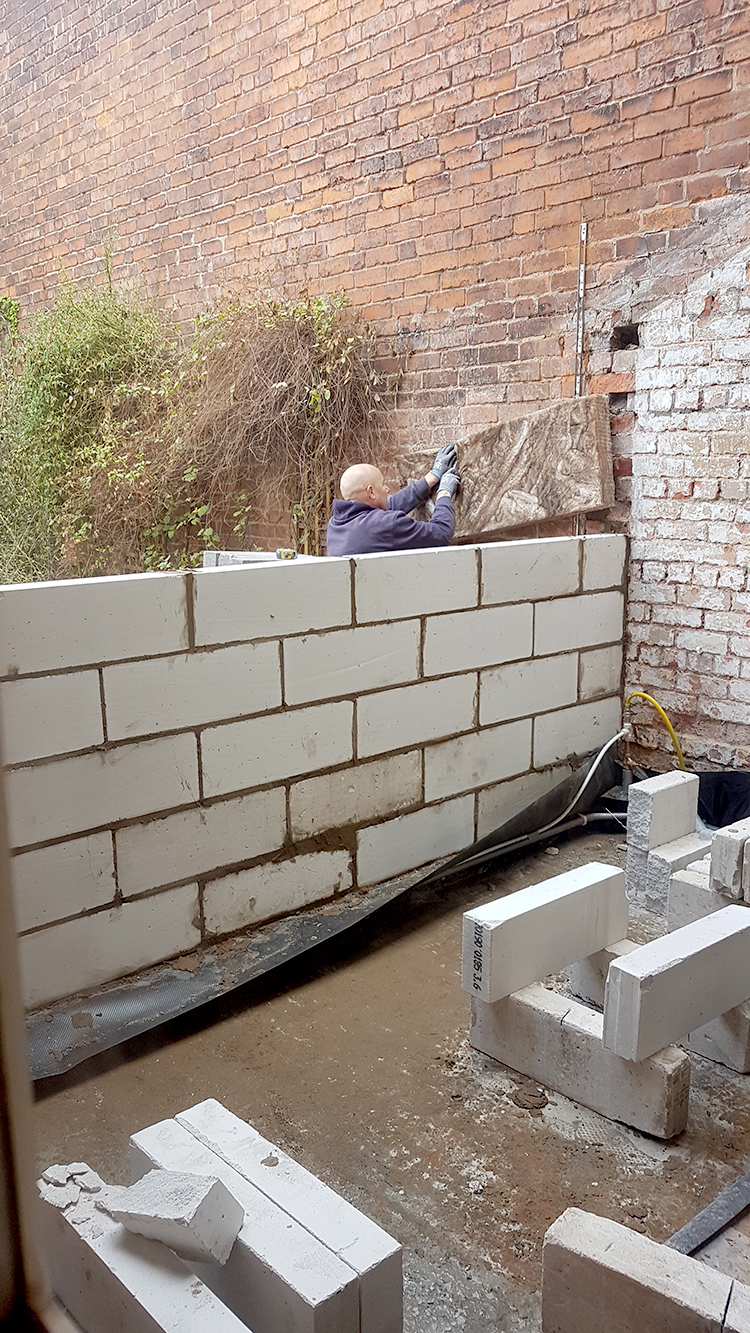 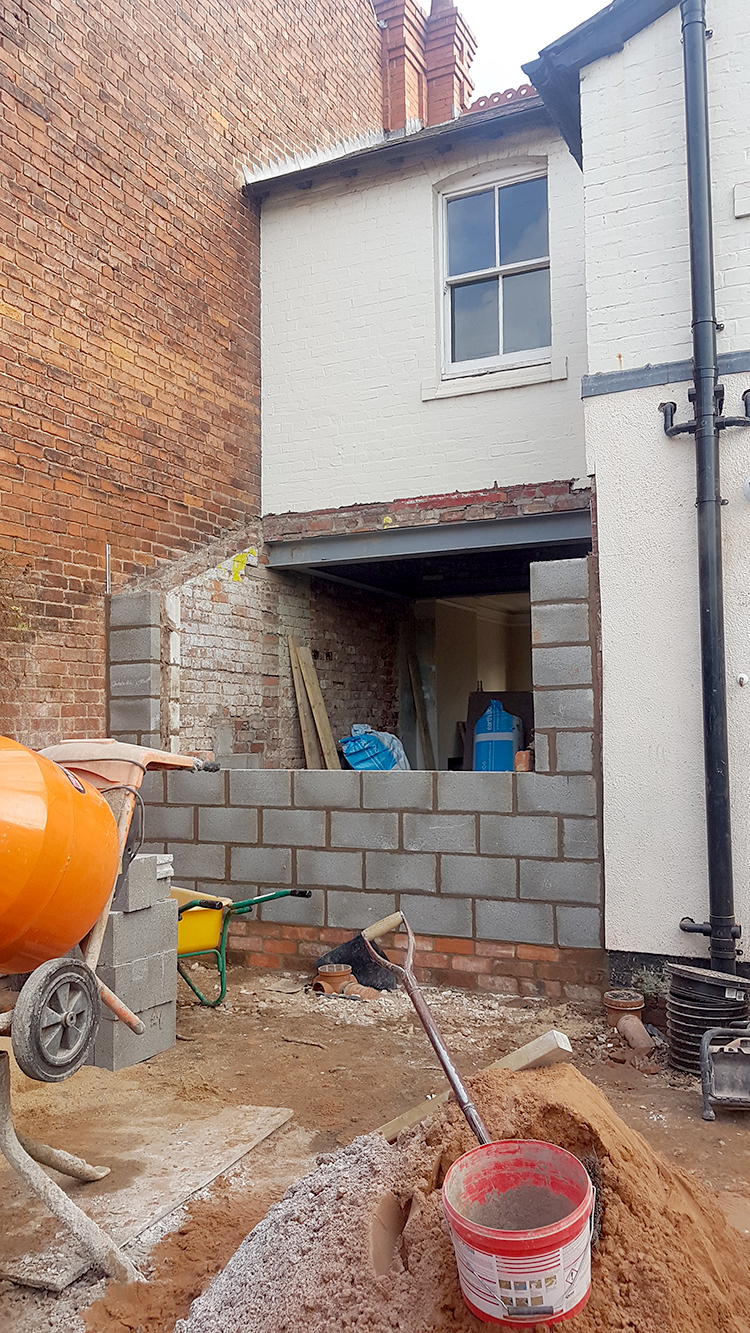 Once that wall was gone and rebuilt, the walls of the new extension started going up – always exciting as we would finally be able to understand the new space and it didn’t take long at all for the blocks to be put in place. The extension was finally starting to take shape! 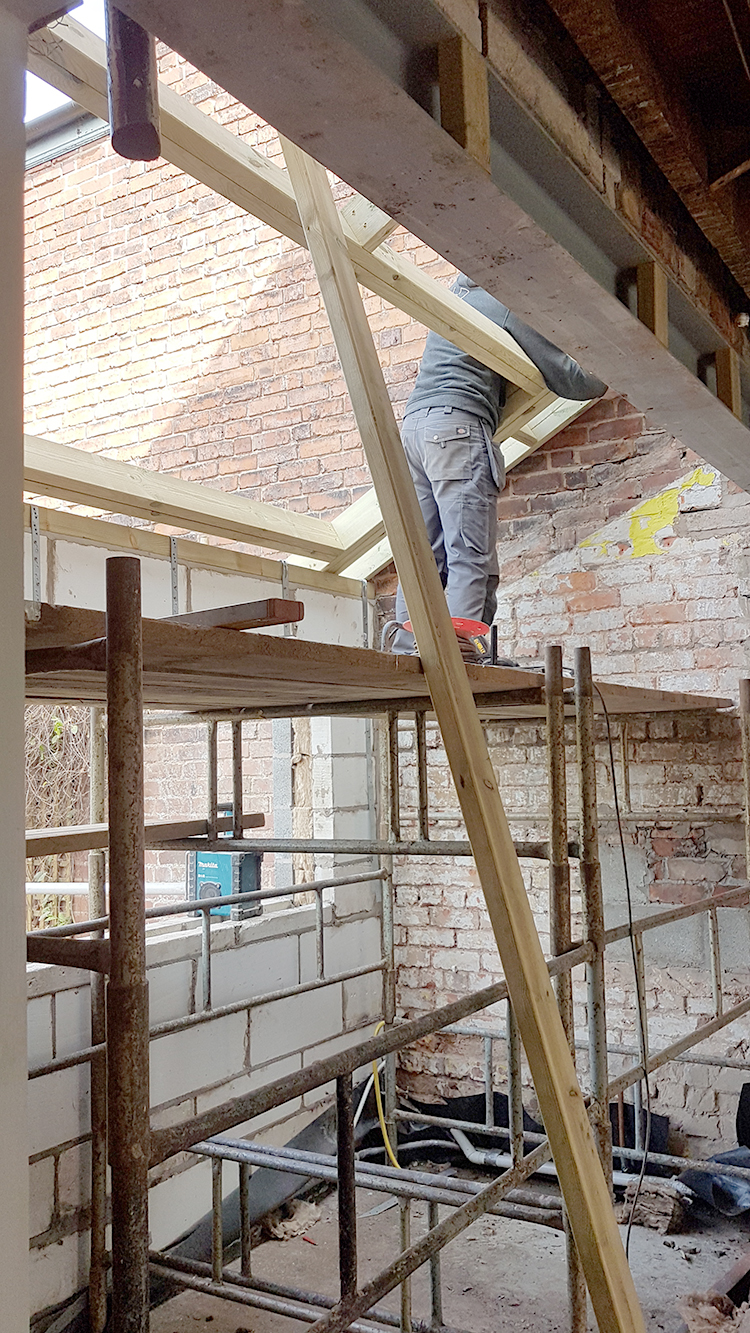 The roof of the extension was the next thing to be tackled. The roof light had arrived and it was BIG. I mean, I had asked the architect for the largest one we could get away with and she delivered! Of course, this was a bit more challenging for the builder because additional supports were required to hold the weight but once he spoke with the structural engineer, a plan was in place and the roof frame was constructed. 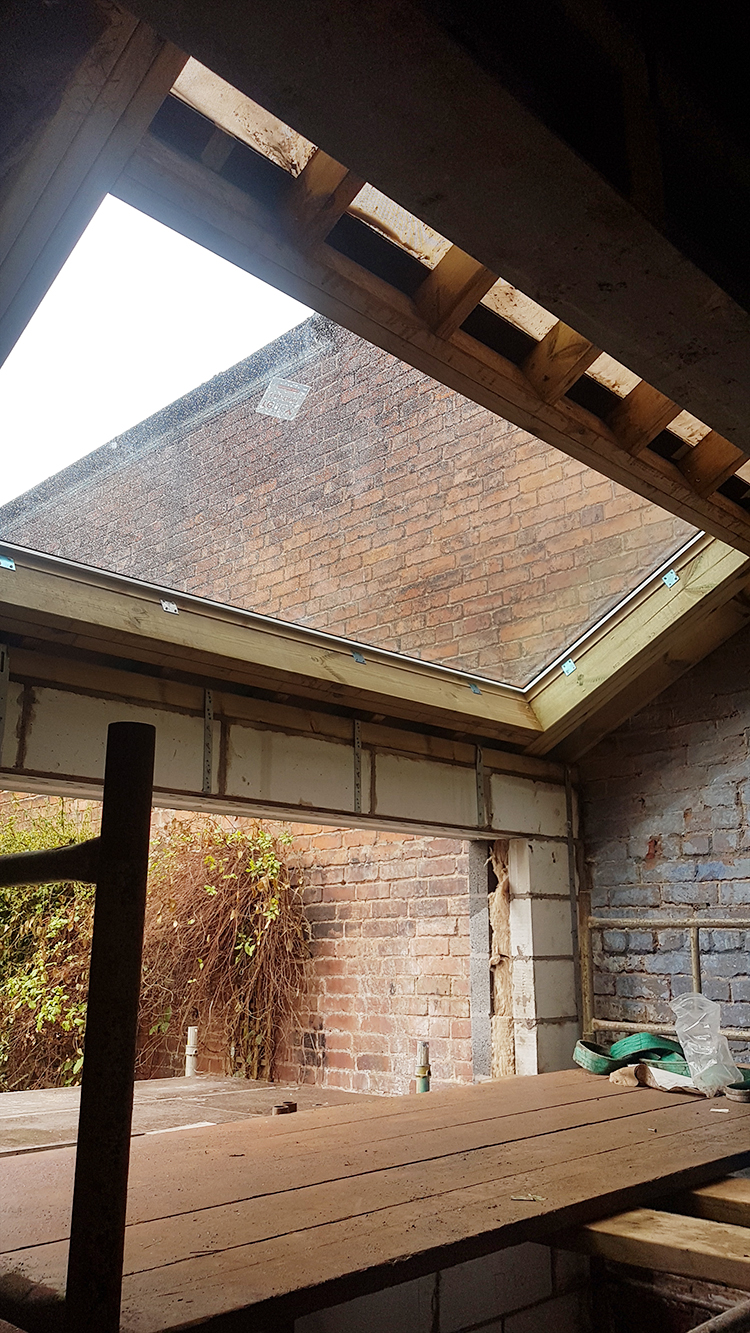 A few days later, we had about 8 guys here very carefully putting the roof light in place. I think my builder was a complete stressed out mess that day but they managed it! (Side note: this is one of the joys of not DIYing – those challenging situations are always so stressful but being able to hand over the stress to someone else? Worth. Every. Penny. Ha!) 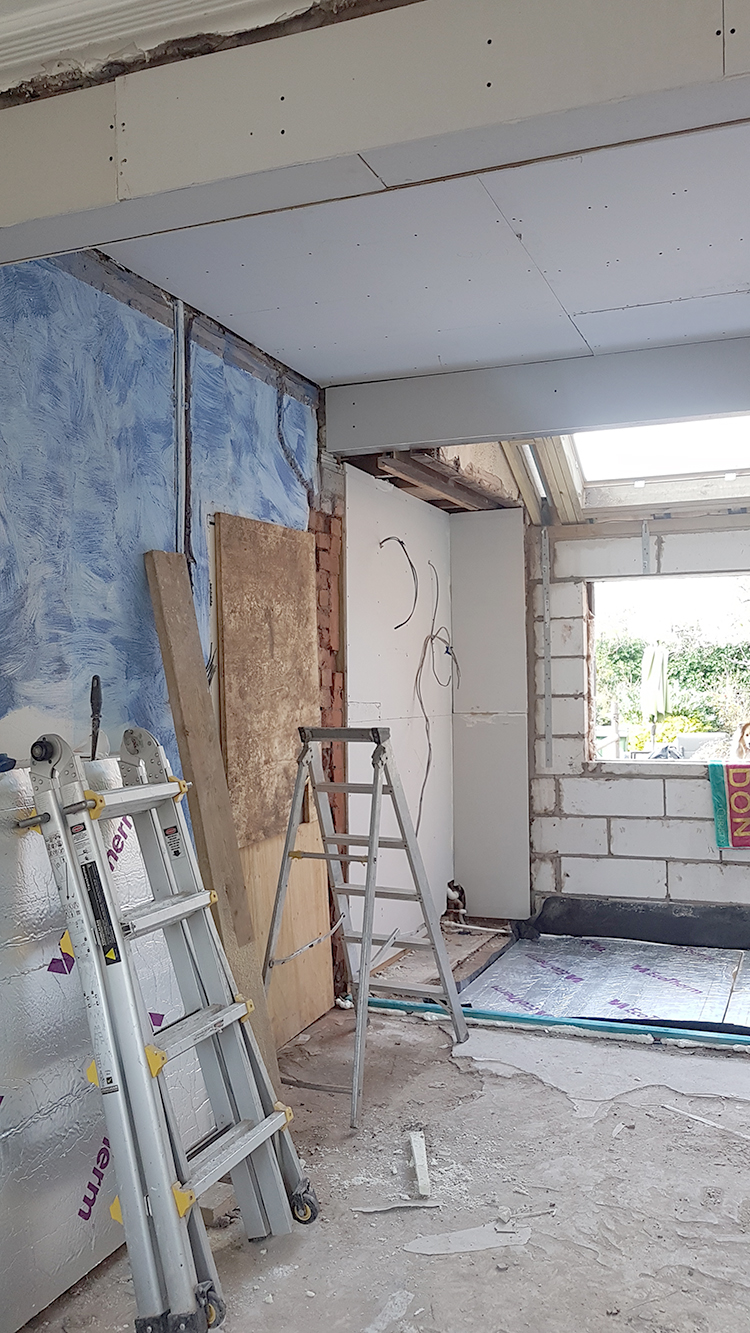 Following this, we were finally able to do the first fix on the electrics, meaning I had to get my plans together for every switch and every socket and every light fixture in this space! Thankfully that all went rather smoothly. 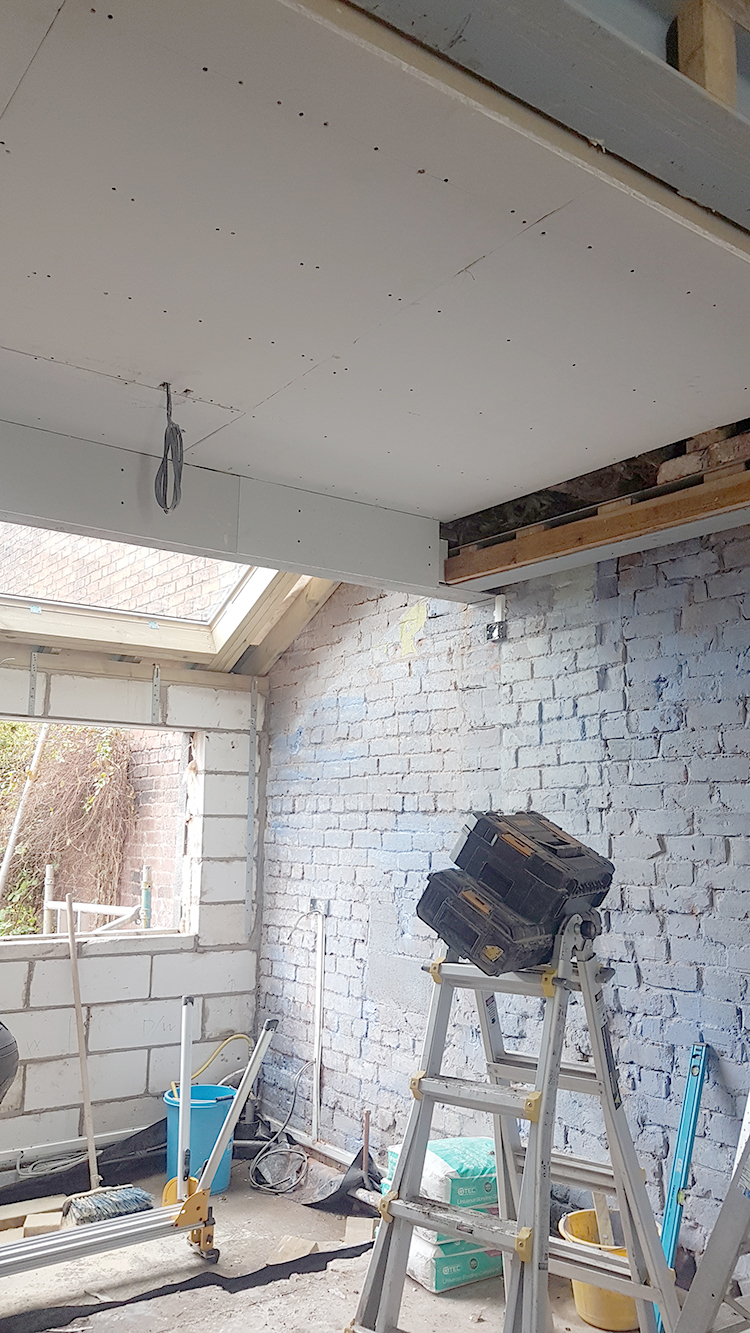 Plasterboard then started to go up in the ceiling and we had a roofer here, finishing the outside of the roof, putting all the layers and slates in place and work began on the subfloor of the extension portion and the old utility room floor. 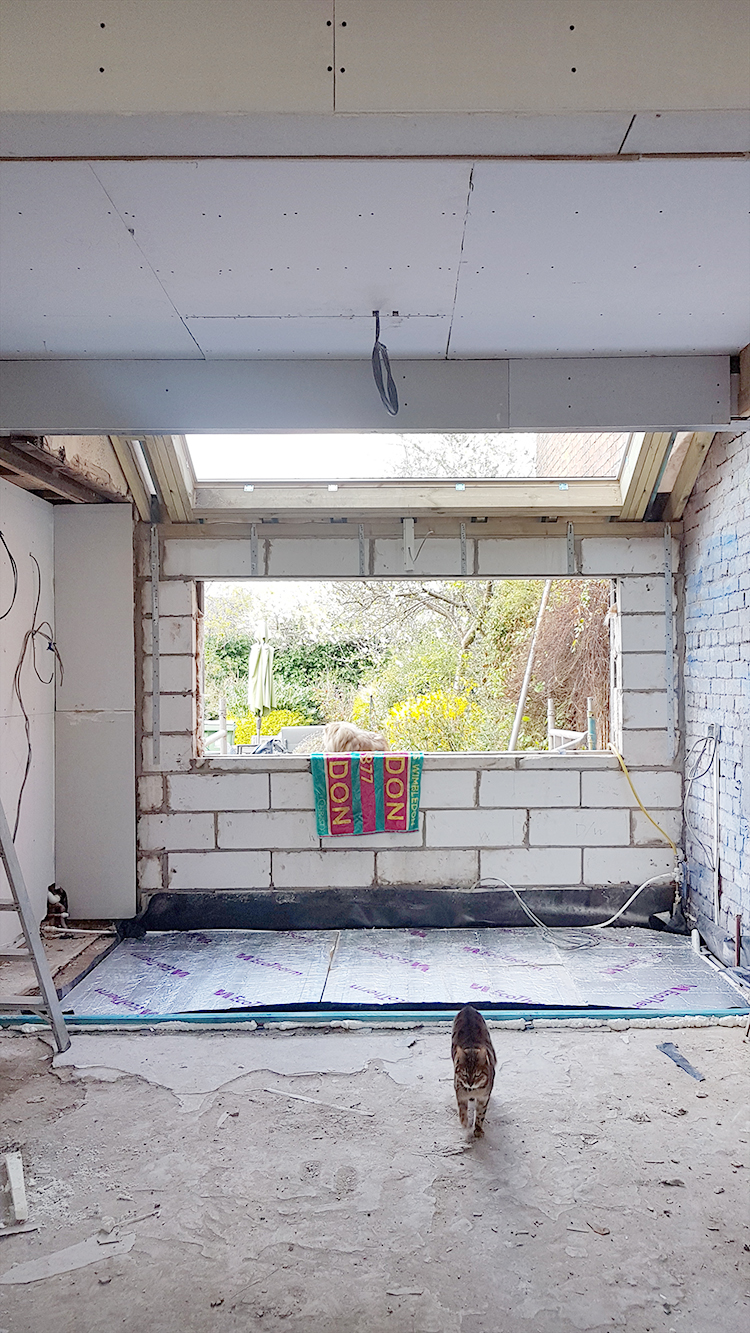 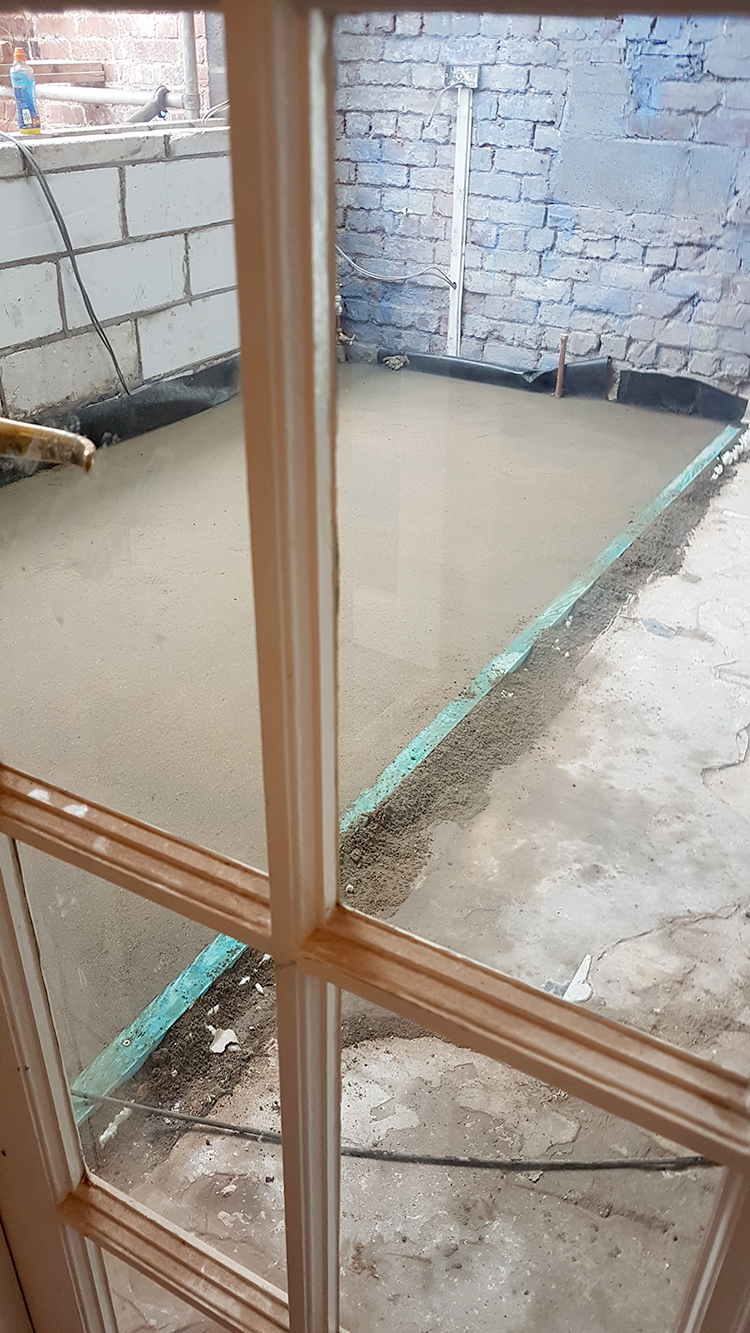 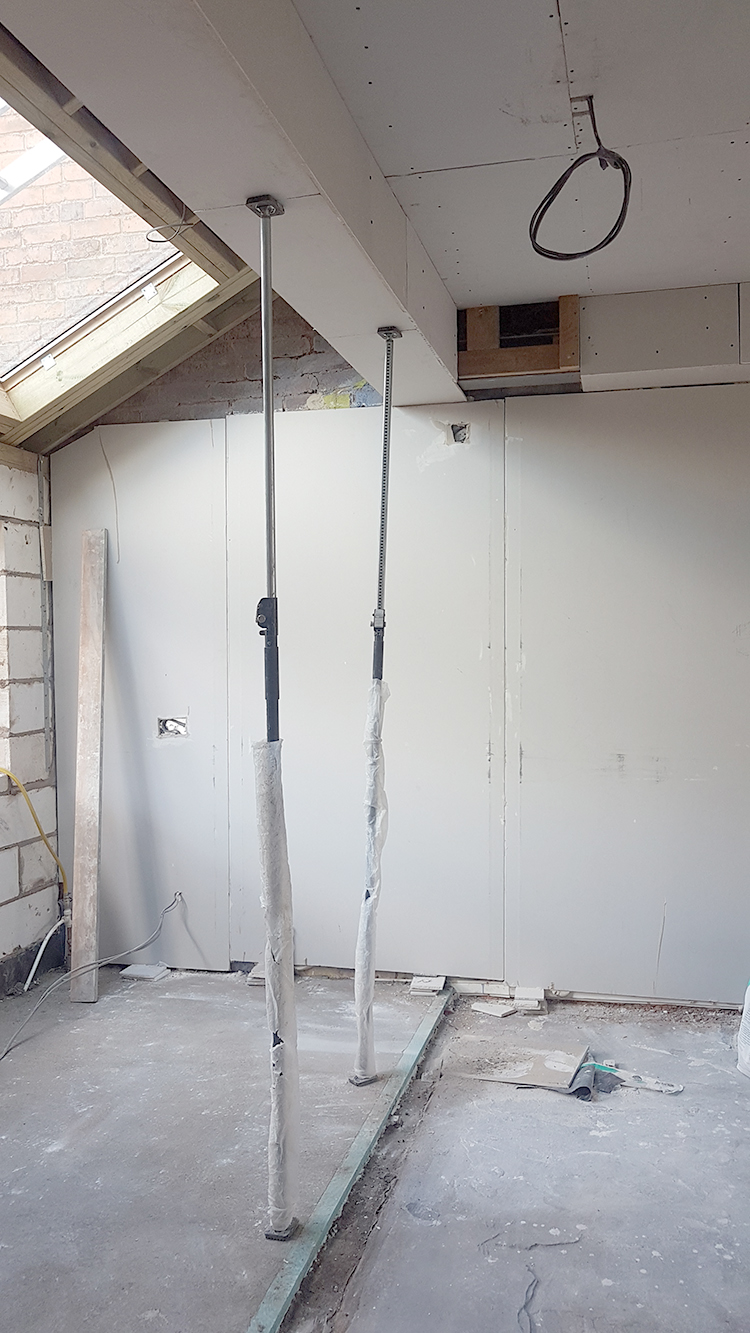 The extension subfloor was done followed by the original floors of the utilty room and more plasterboard went up! There had been a bit of a delay on the double glazed glass that would go into this rather large timber frame window but they did get the window frame installed. More plaster boarding and more plaster boarding followed and we finally got the boxed frame in for the future extractor fan – the beginnings of my kitchen! 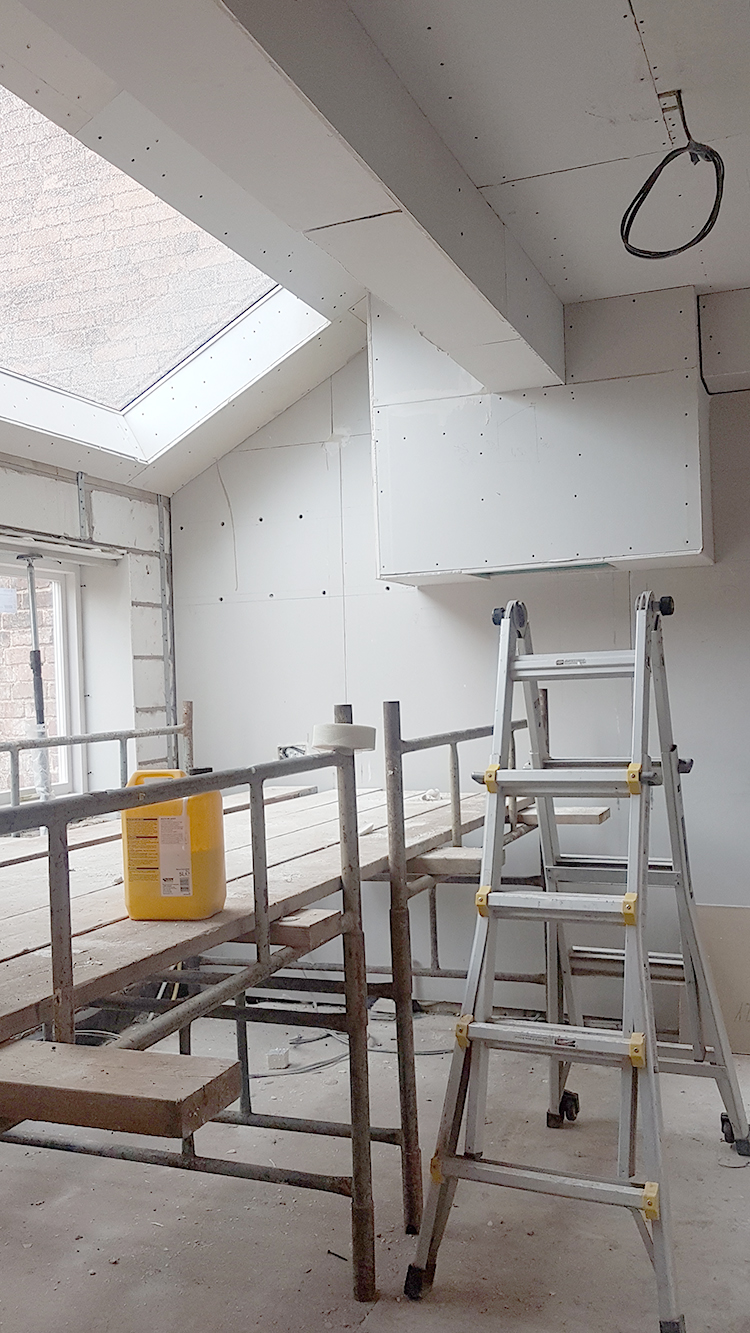 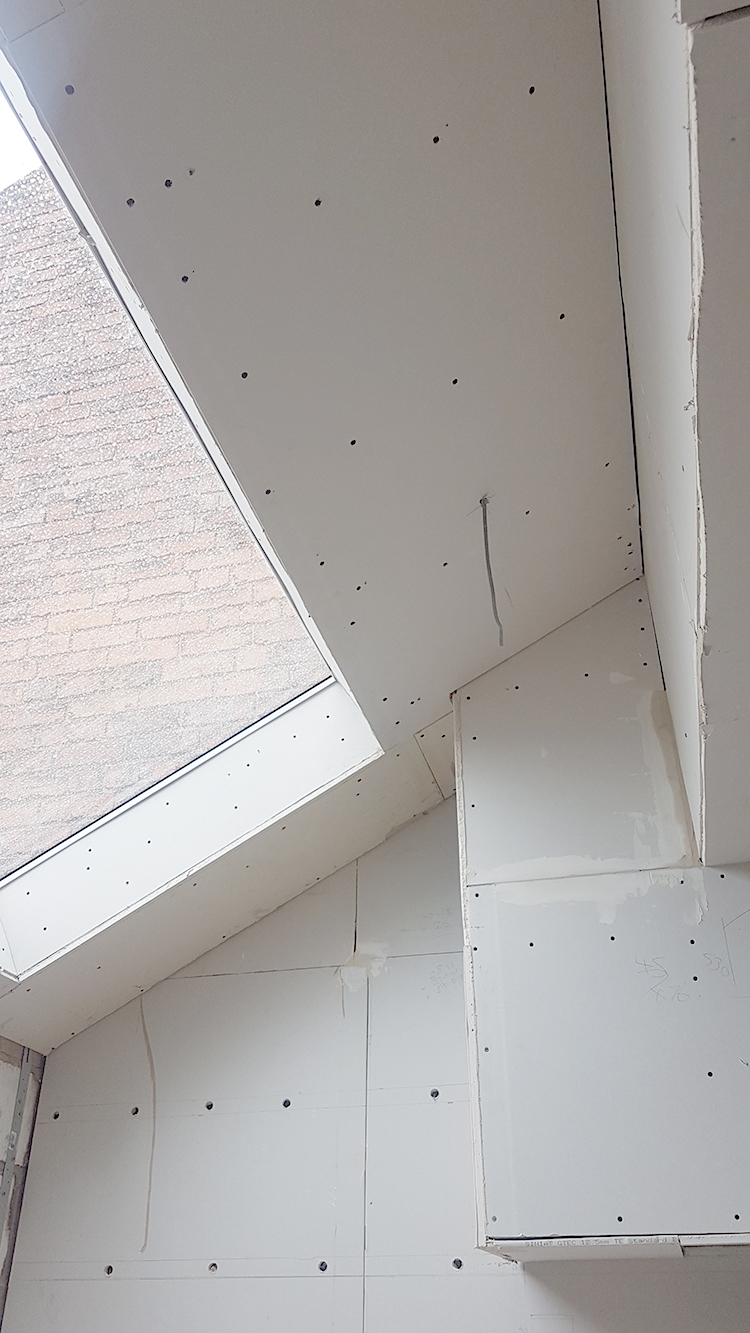 Finally, the kitchen window glass was installed and for the first time in more than 6 weeks, the space was FINALLY sealed to the elements! 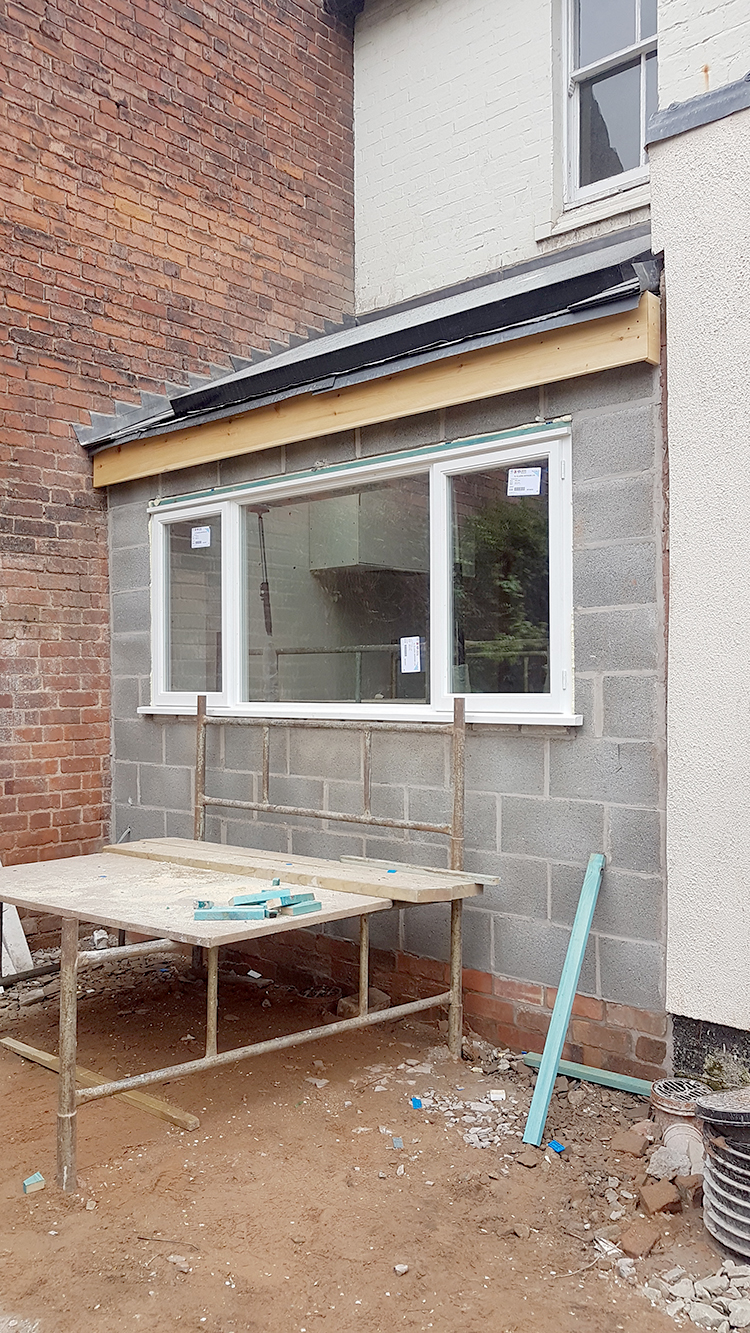 Can I get a hell yeah?! Thankfully, we haven’t had any real bad weather – it’s literally only rained 3 days of the build (and not even full days) in the last 6 weeks which is, quite frankly, crazy dry in comparison to what we were used to in Manchester. We definitely get less rain here in Shropshire and it’s definitely helped to move this build along! 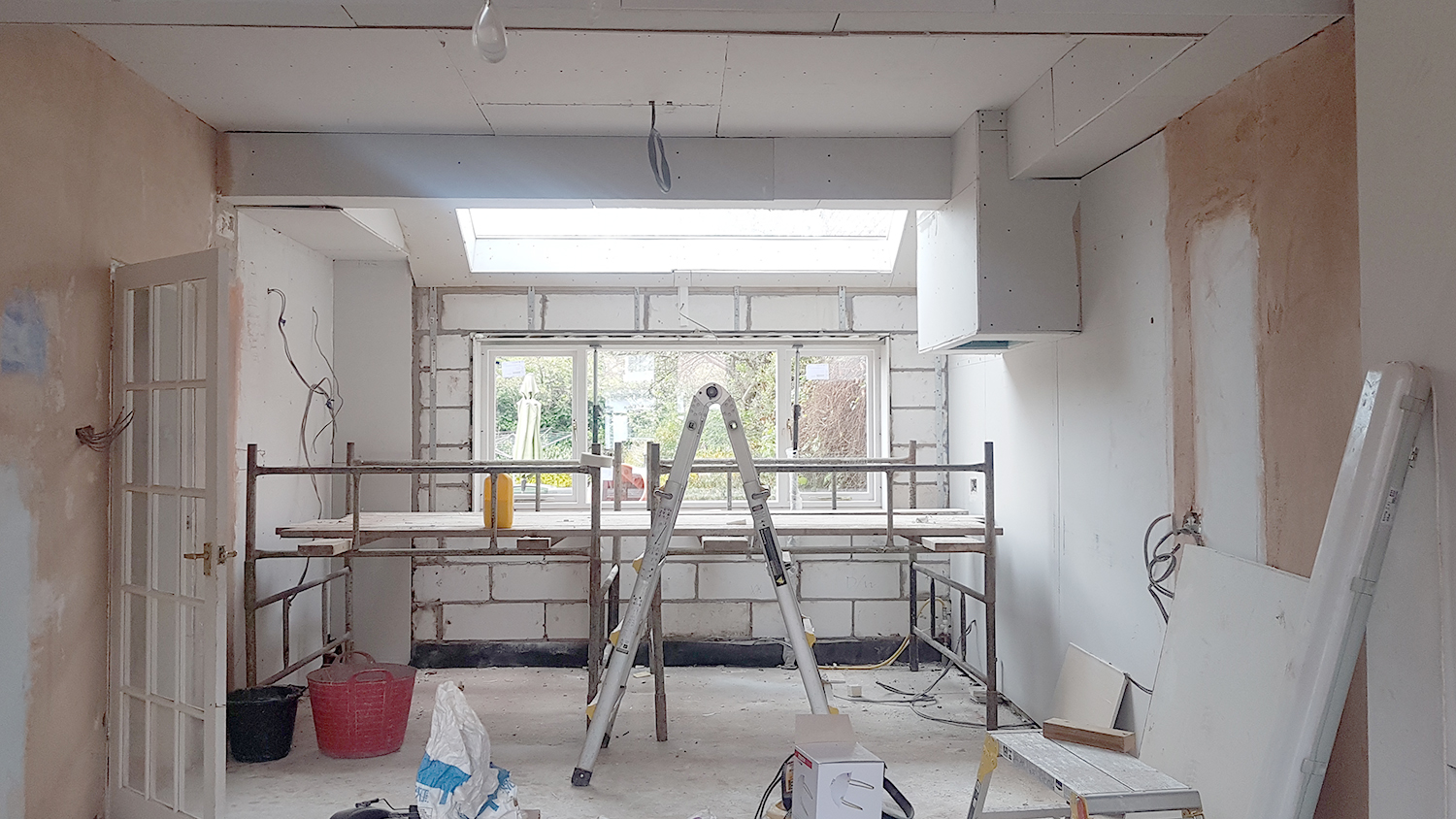 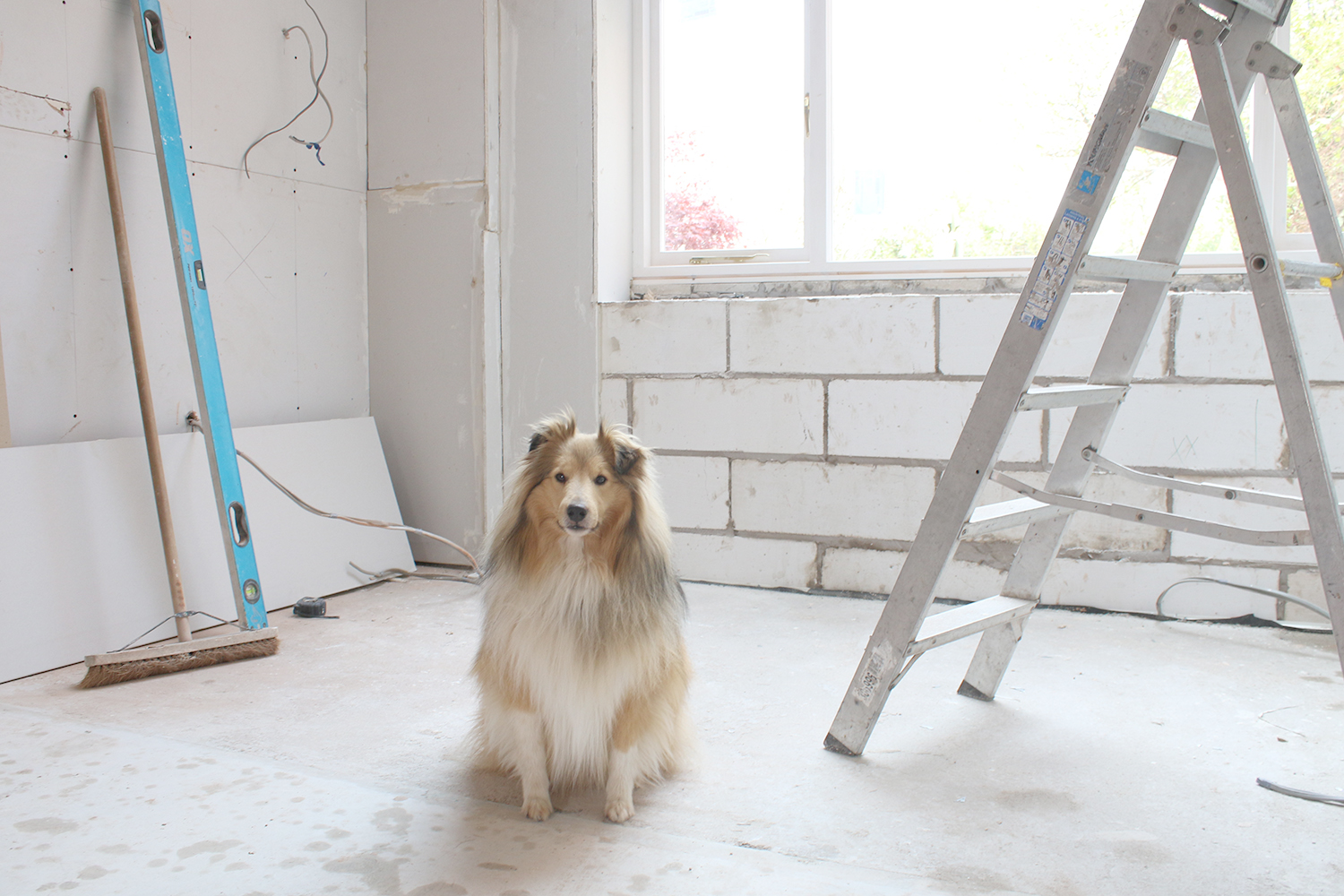 Quito is pretty chuffed with the space too! 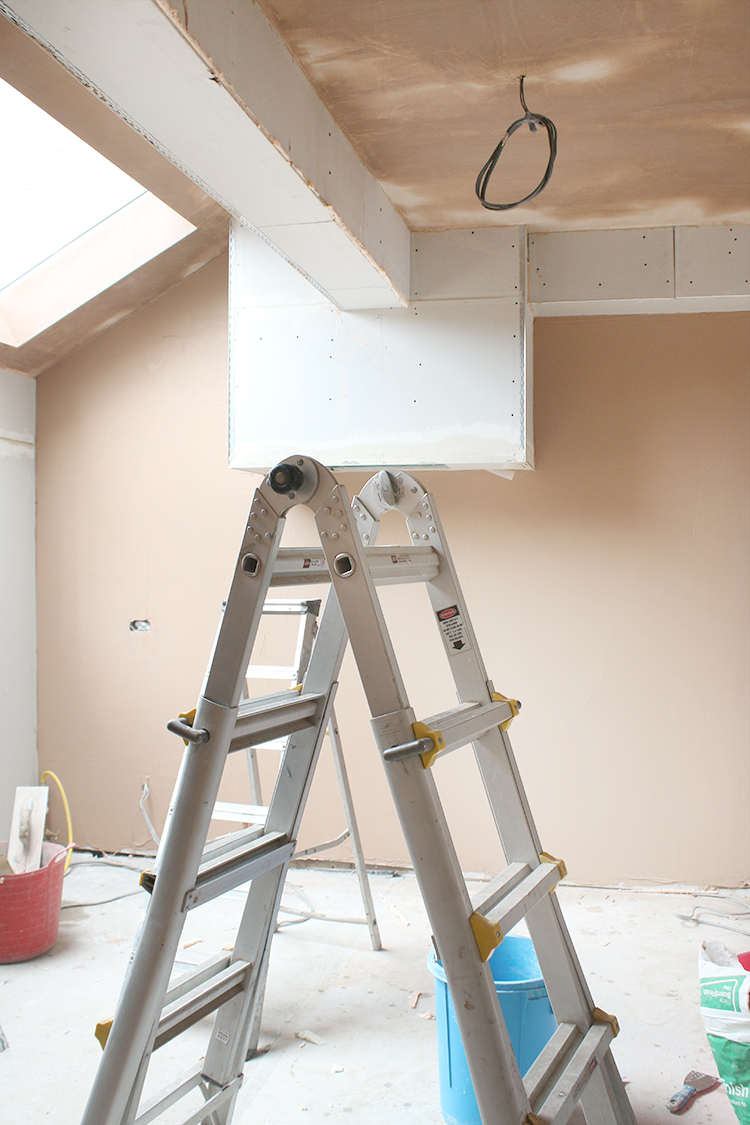 And we’re now up to the point where the whole space is being plastered. It’s amazing how transformative this step is, creating a clean and lovely slate. The plasterer works FAST as well – I blink and another wall is totally done which is super exciting. 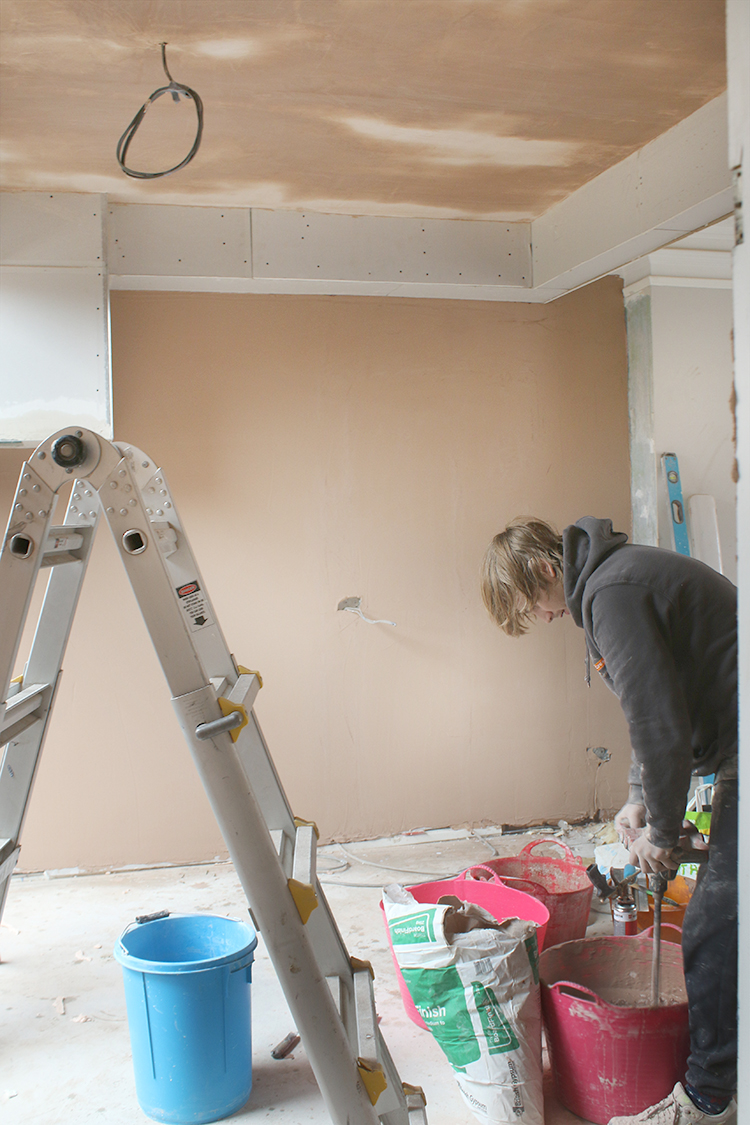 Also, this whole space is just so BRIGHT it’s unbelievable. I’m so happy with the roof light, I can’t even express how much of a difference it makes to the natural light in a room when you have glazing above your head. The difference between this side of the house and where the old kitchen is (basically across the hall!) is literally like night and day. The old kitchen is so dark and depressing and this space is so airy and bright and I can’t wait to finally be able to enjoy this space.

We have the kitchen survey being done in around a week and a half and it’s only once that’s complete that we can finalise all the plans for the new kitchen and then it will be put into manufacturing which takes around 6 weeks. So there will be a bit of a gap between this work being finished and the kitchen going in.

In between that time, Wayne and I will be laying the flooring ourselves so at least we have time to get that all completed before the kitchen is installed and there will be plenty more to share! What do you think of the changes so far?