I didn’t know whether to call this post a ‘before and after’ or a ‘refresh’ or a ‘makeover’ because in my head, they are all slightly different things. I’m not sure I’ve really done enough to warrant a ‘before and after’ but I’d say it was more than just a refresh. The truth is, I could have done a million more things to update this bathroom. 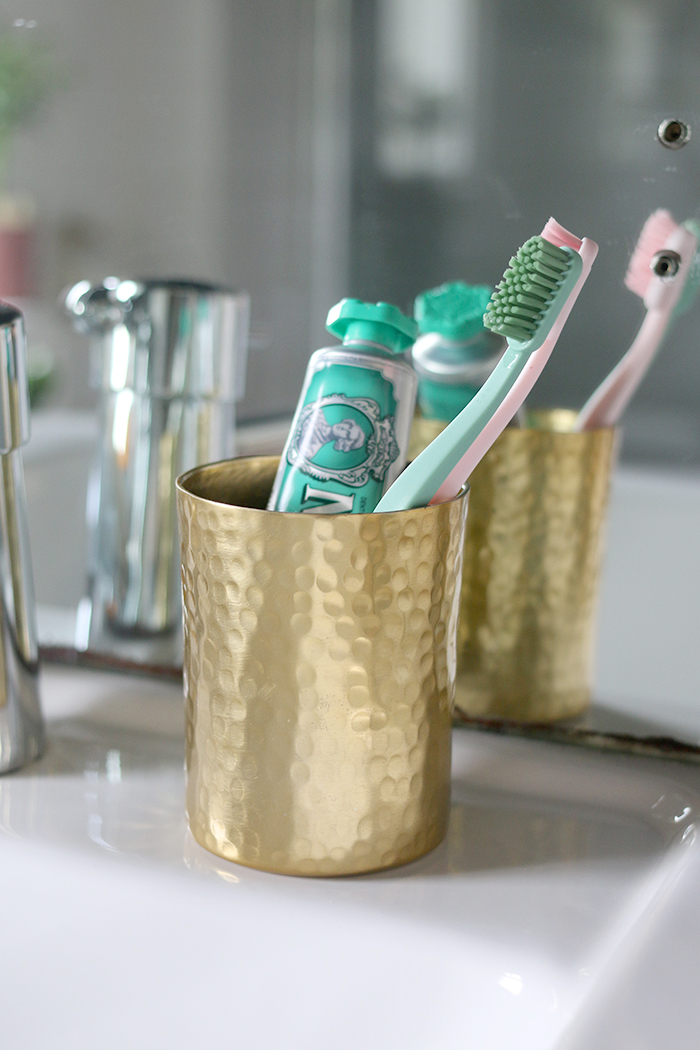 In fact, I’d love nothing more than to rip everything out and completely refurbish the entire bathroom. However, we have bigger fish to fry downstairs and so making this room liveable as quickly as possible for as little spend as possible was the goal here. I finished painting the room 2 weeks ago and since then, it’s just been constant tweaking. And with tweaking (at least in my head) comes the urge to spend just a little more. And a little more. And a little more. And at some point, I just had to say to myself ‘enough!’ and that it’s time to share – even if it’s not really quite my dream bathroom and even if I can do more. So today, that’s what I’m doing.

The bathroom, when we moved in, was okay. It was definitely a lot bigger than our old bathroom which was certainly a plus but it’s an odd shape with a sloped ceiling and it was clearly expanded into the adjoining bedroom in years gone by in order to squeeze a tub at the highest point. The lighting (mostly cheap chrome spotlights) aren’t really my bag nor was the insipid pale blue colour on the walls. 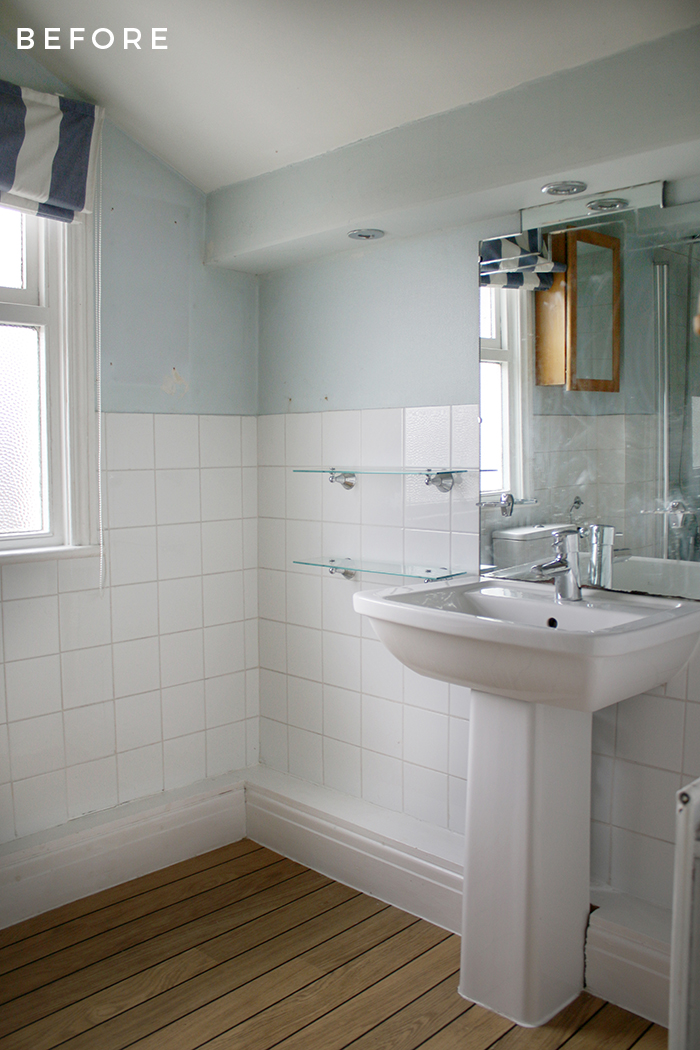 There was a broken, blue and cream-striped roman blind as well as an ugly chrome towel rail and toilet roll holder. There’s also some pale blue mosaic tiles that have seen better days inside the tub/shower although there wasn’t much I could do about those. 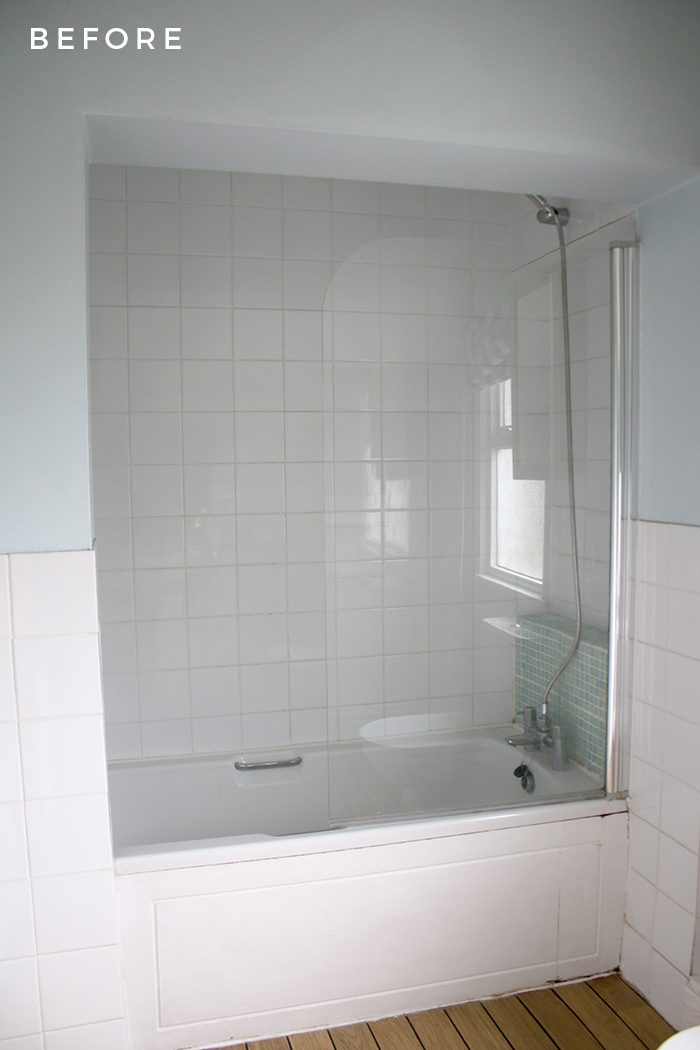 What did it have going for it? Well, the flooring is a nice neutral wood laminate which added some warmth to the room and the square white tiles are super easy to work with. Thankfully, all the bathroom units (sink, tub, toilet) were white as well and the medicine cabinet – the only tiny bit of storage in the whole room – was pretty basic wood and not terribly offensive. I knew by spending a little bit of money on some paint and a few accessories, I could make what we had work until we got around to a full refurbish – which, to be honest, probably won’t be for a couple of years at best. 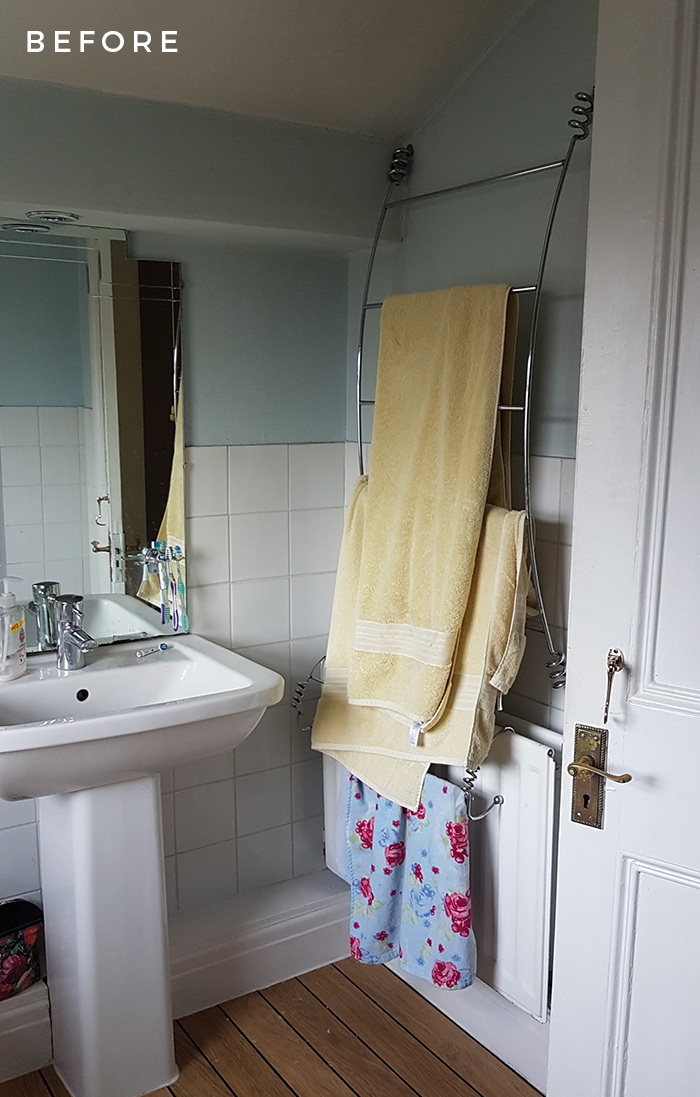 The first thing I did was remove the old roman blind – the window itself contains obscured glass and there is no neighbour near enough to see through anyway – so there was really no point to having it at all.

I also started my search for replacements of the towel rail (seen above – this picture was taken when we viewed the house for the 2nd time so those aren’t my towels!), the toilet roll holder and a set of swirly black hooks on the back of the door (which I failed to get a picture of but trust me, they were pretty ugly). 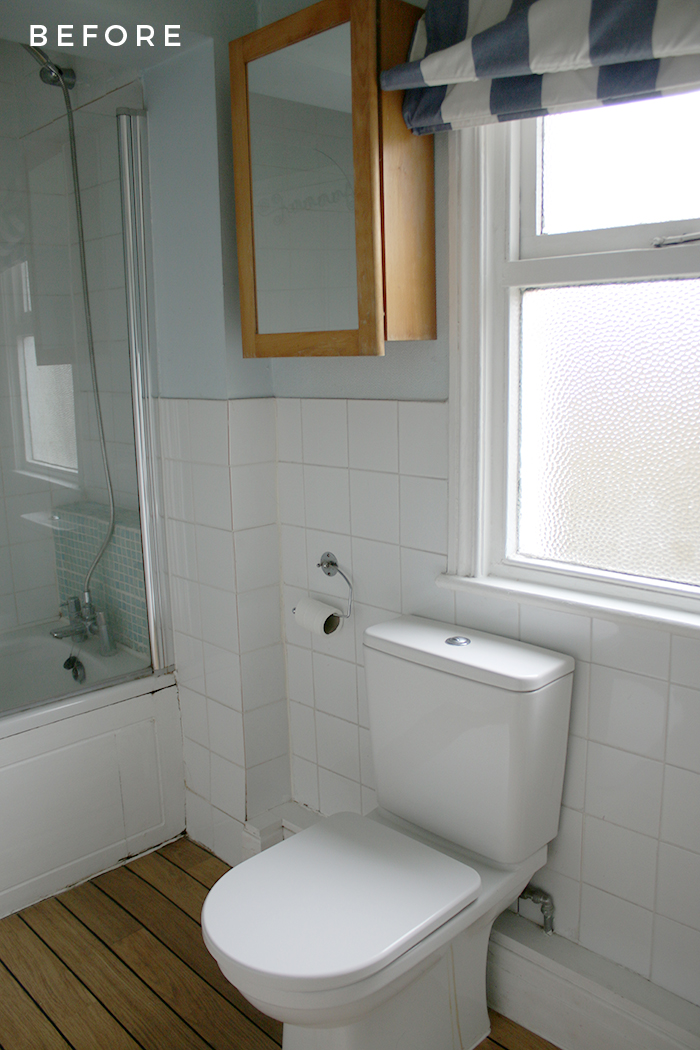 Oh and I removed the chrome cup holder and toothbrush holder (you can see those in the images above – both which were caked in ancient toothpaste and rust *gag*) that were attached to the mirror. It left a few holes in the mirror but honestly, I prefer to put up with a couple of screw holes than what was there before. So now that you know what I was working with, it’s time to share what it’s looking like now.

This post may contain some affiliate links. You will never pay more when clicking on these links but I may earn a small commission as a thank you from the brand for the referral.

For the biggest and cheapest impact, I turned to paint. I decided that everything – including that sloped ceiling – would look much better in black. I actually had to use Photoshop to convince Wayne it was a good idea when he responded to my suggestion with a scrunched up ‘ewww’ face. Once he saw my mock-up, however, he was sold. And it really does make a huge difference to the space. Anyway, I’ll shut up for a second and show you the after… 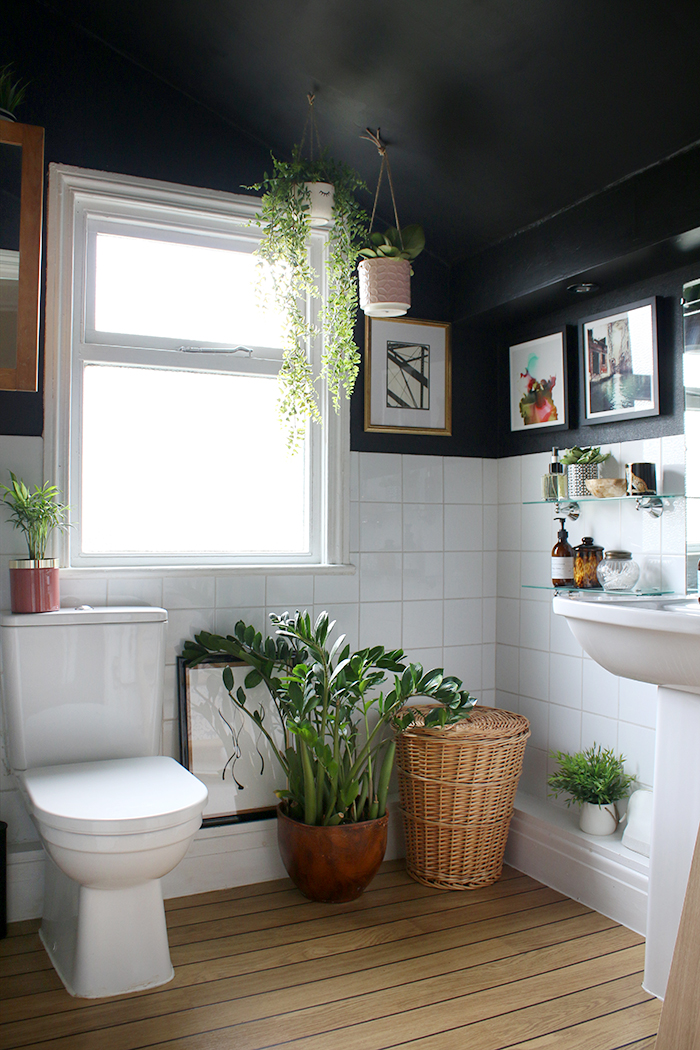 Better, right? The paint colour is called Downing Street by Valspar – it was the closest I could find to a true black. I’ve not used much Valspar paint (the first time I admit I wasn’t impressed so have been reluctant to try again) and I was nervous after the first coat which just looked pretty dodgy. However, the second coat covered like a dream and I was really happy I didn’t need to do a third. Because most of the bathroom is white and wood, it doesn’t feel overwhelming at all and it still feels like a bright space – just slightly more interesting now. ;) 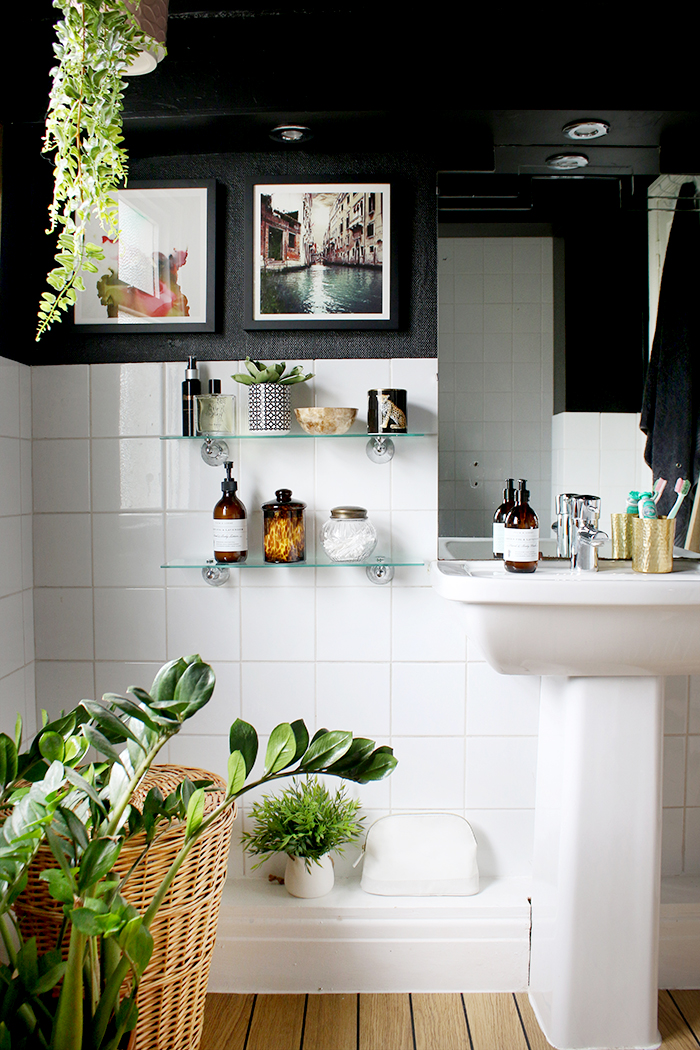 Those little glass shelves you see above were already there and as much of an urge as I had to replace them and/or remove them and centre them on that wall (honestly, I have no clue why they are off centre there), I decided to just utilise them for now as storage for things like hand lotion, cotton buds and other bathroom accoutrements. All the things on the shelf and the artwork were things I already owned. 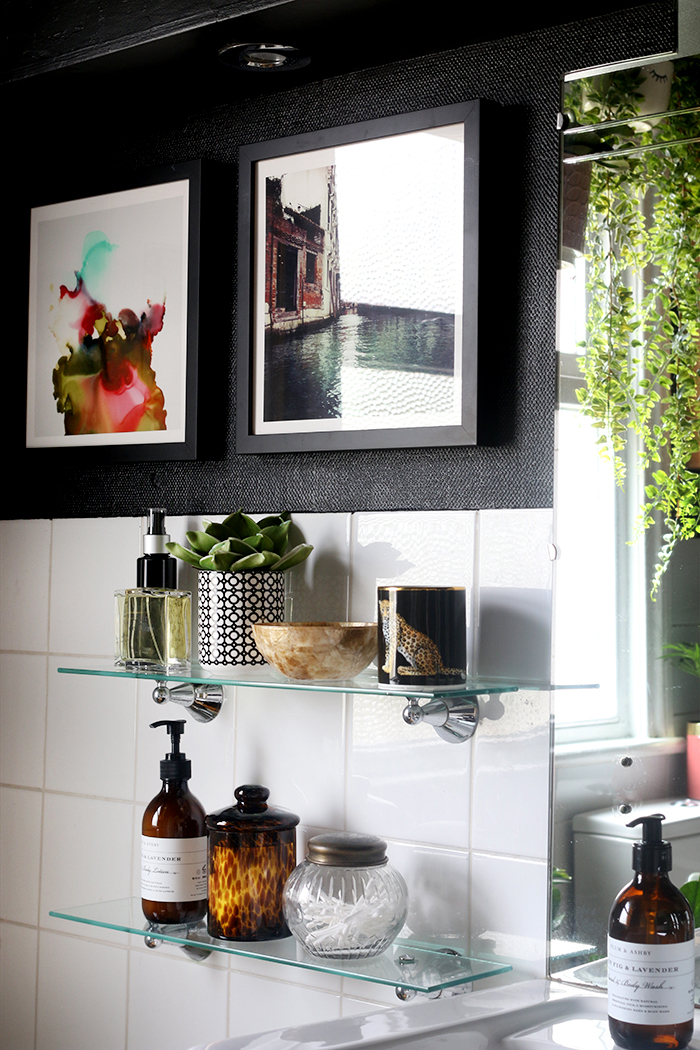 I struggled a bit with the towel rail. There really isn’t much space for towels to go and I wanted something where the towels would be able to hang properly to dry. If I’d had a bigger budget, I would have considered a heated towel rail here to replace the radiator but what I really just wanted to do was get this bathroom into some kind of order now (did I mention how super impatient I am?). So perhaps in time, I will still do that. For now, this was my solution… 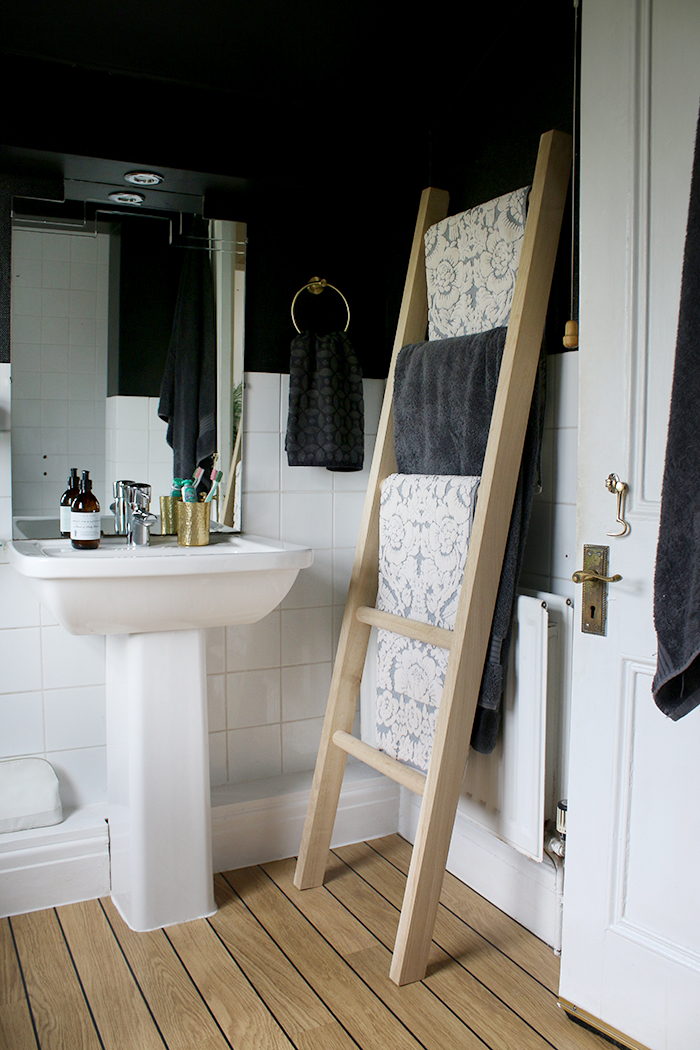 A wood towel ladder gave the room a little bit of visual warmth, tying into the wood floors and cabinet and didn’t take up much floor space. It was actually my biggest splurge for the room (I went into this swearing I wasn’t going to spend much) but it was a good solution and provided plenty of storage space for hanging. Of course, after I put it up, I immediately wanted to buy some new towels (those ones you see there are actually years old) but well, all in time I suppose! 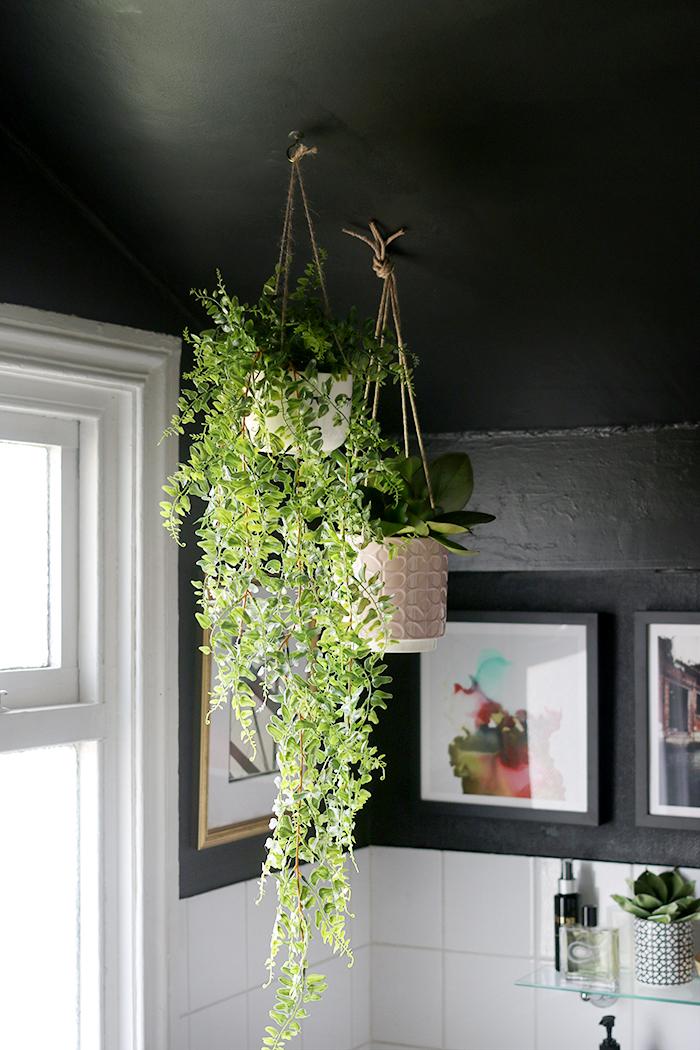 I also decided I really wanted to go big with plants in here (I will probably add a few more in time) and while I didn’t want to particularly make a feature out of the slanted ceiling, it is an interesting quirk of this bathroom so I decided to hang a couple of plants from the ceiling. I did purchase the two hanging planters – the white one with the little sleeping face is from ASOS and the pale pink one is by Orla Kiely from Amara. 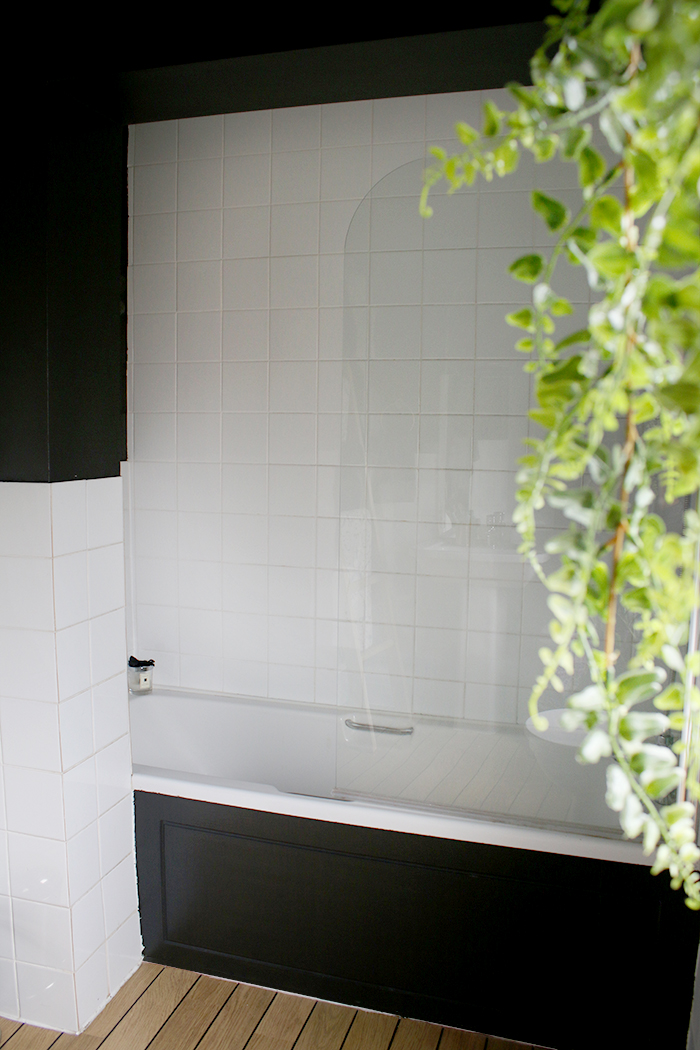 On the other side, as you can see, I continued the paint to the bath panel. There’s not really much of anything happening on this side of the bathroom to be honest as it’s a bit of a small space! Perhaps I should have bought a cute little bath caddy to style it with but again, I could just keep going and keep going with tweaking here! ;) 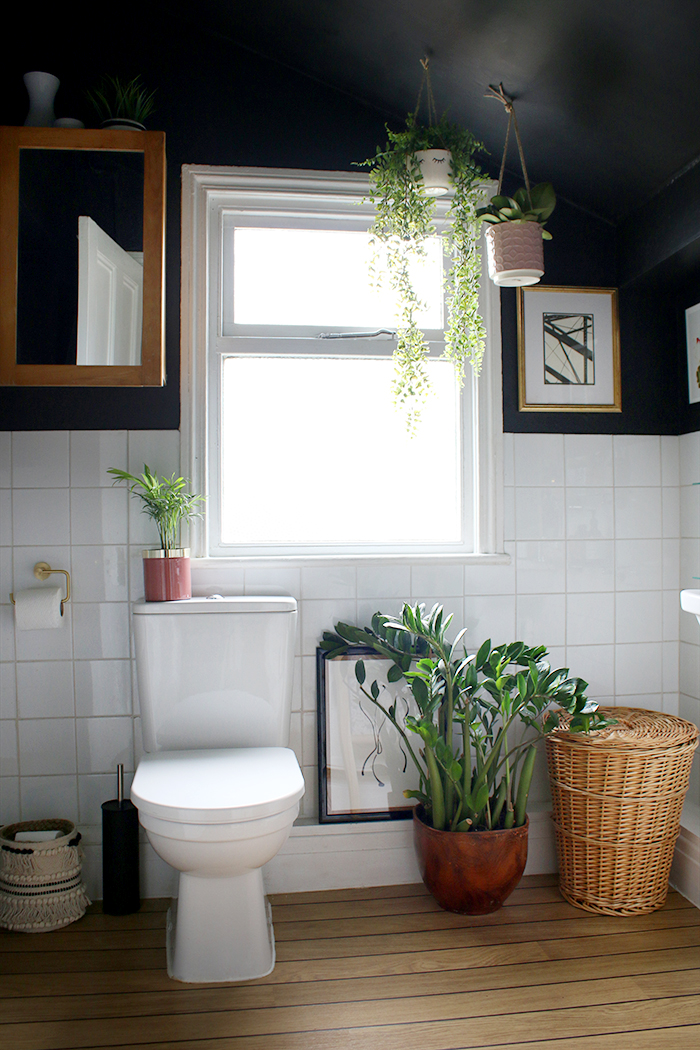 I added a little pink and gold plant pot (from here) to dress up the toilet a bit (can you dress up a toilet?!) and you’ll see I also changed out the ugly chrome toilet roll holder for one that’s much prettier in brushed brass from Miller Bond. A little boho fringed basket that I’d got from ASOS holds additional toilet paper. 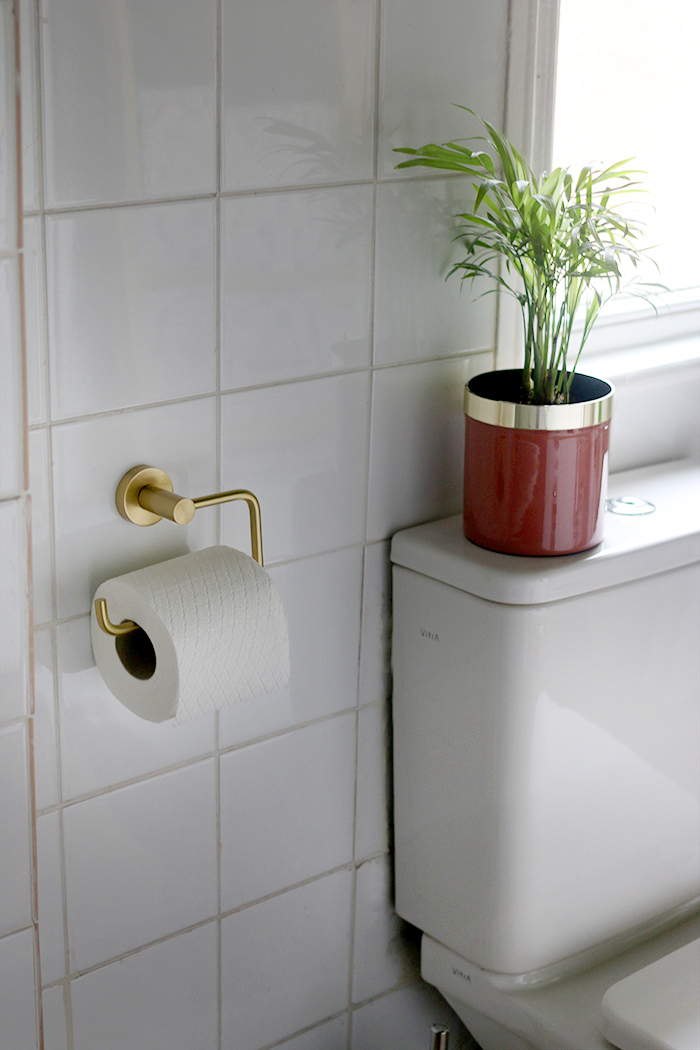 As you can see, I did mix metals in here with both gold and silver items but I carried over the brass finishes throughout the room so there’s a good mix of both. 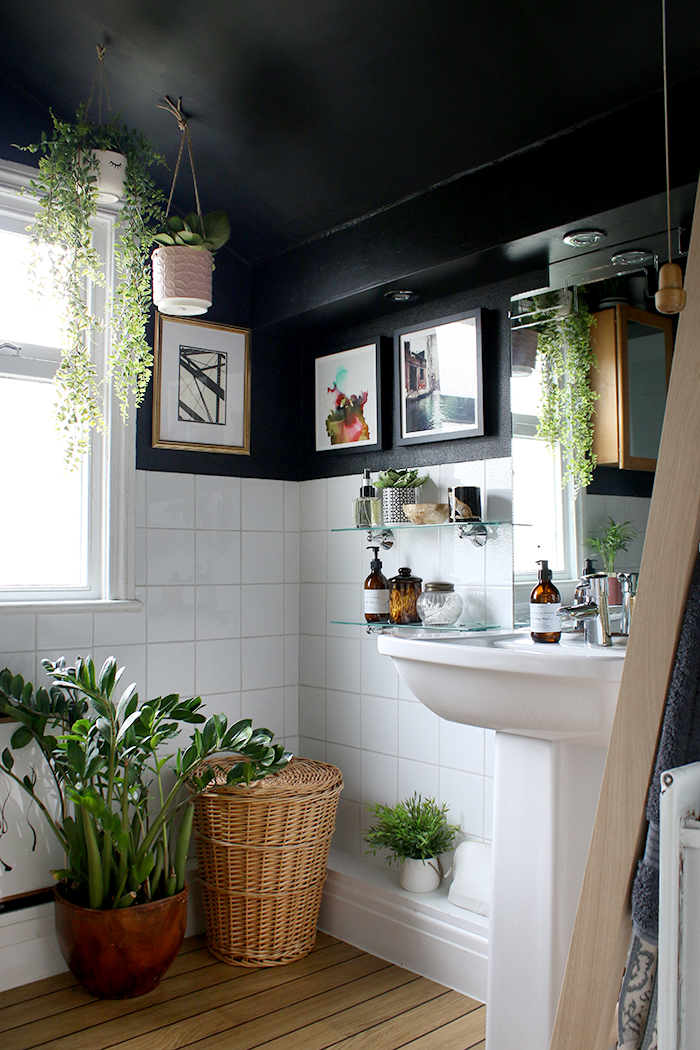 I moved my big ZZ plant in here and our wicker laundry basket, both of which add some texture and life to this corner as well as a print I’ve had for years that I simply leaned on the ledge that follows along the whole of the room. I think the print was originally from Ikea. The art you see are all prints I already had and I considered getting some new ones (see? I could tweak until the cows come home) but these will do for now. This is actually my favourite view of the bathroom and it’s what you see as soon as you walk through the door. 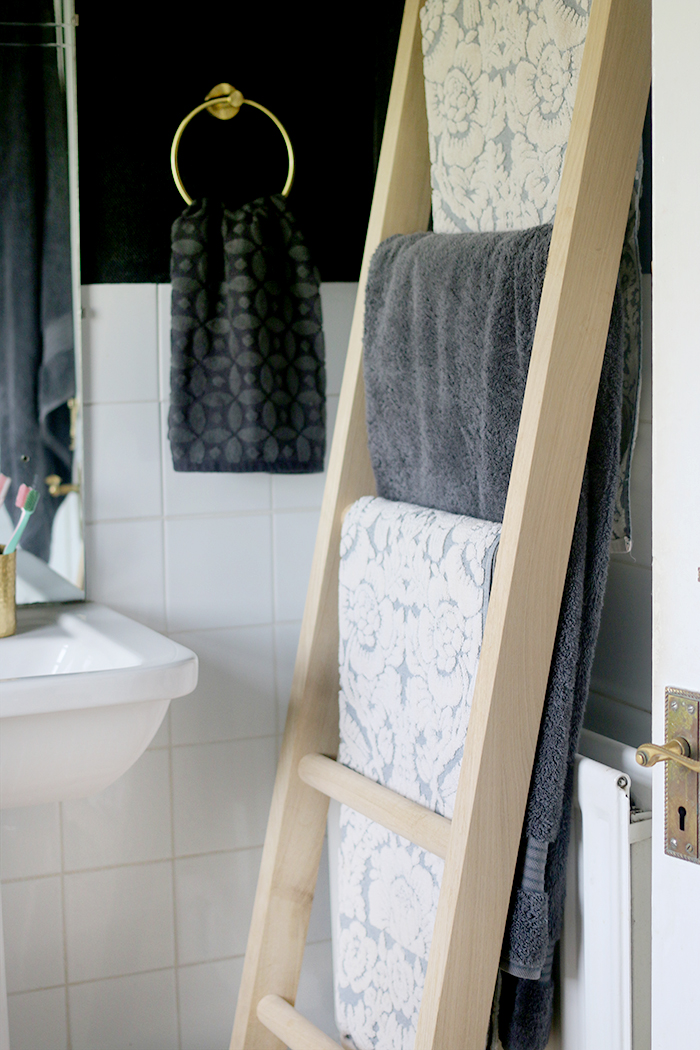 I also added the Miller Bond brushed brass towel ring which matches the toilet roll holder. Yeah, I definitely need to get some new towels in here. 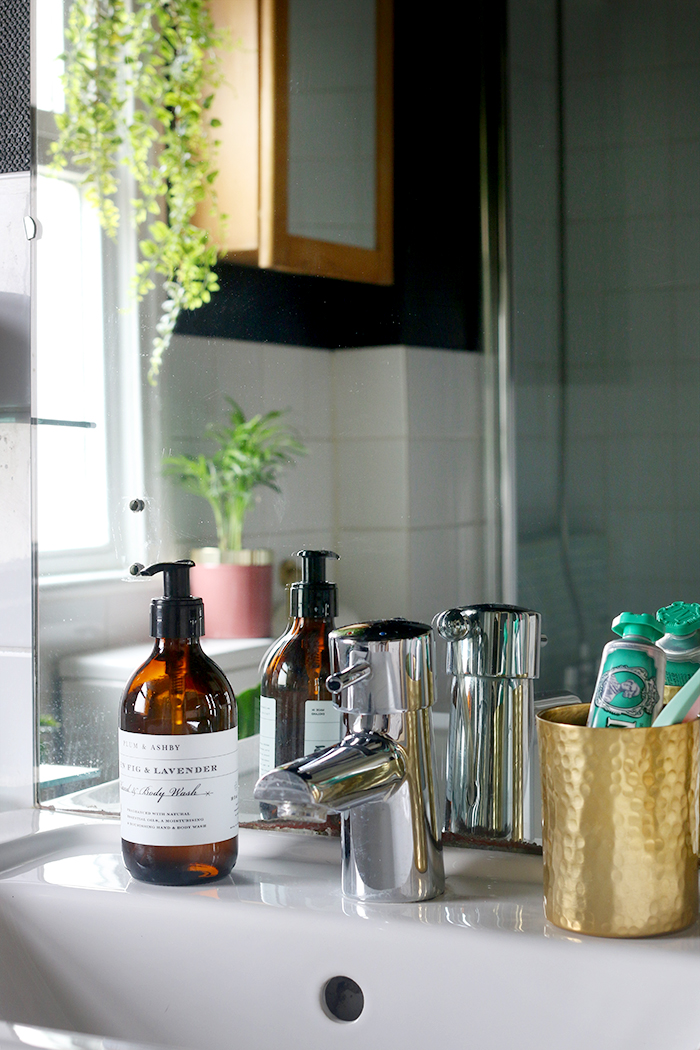 Excuse the fact I should have done a better job with polishing that mirror but who says you can’t have a pretty toothbrush holder? That little hammered brass pot I’ve had for a long time and it just seems to come in handy for everything. And yes, I actually bought nice looking toothbrushes and Marvis toothpaste because I wanted the sink to look lovely all the time. (I’ve talked about my predilection for this kind of thing before.) 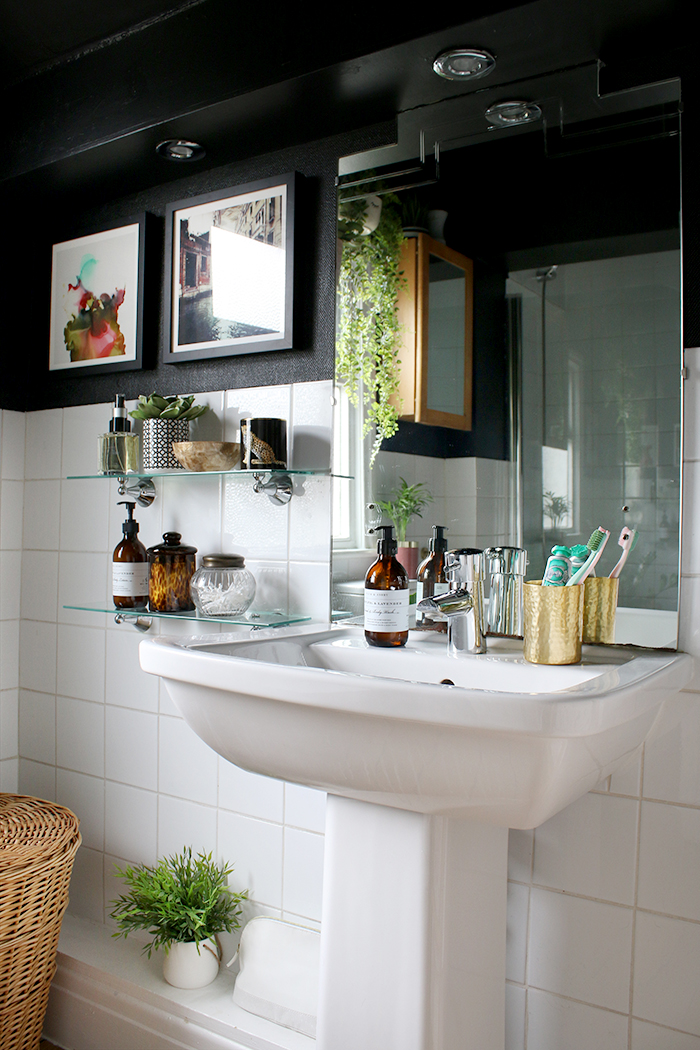 So that is my bathroom refresh/before-and-after/makeover. I’ll probably keep on tweaking this space as I go but for now, it’s cute enough in here to carry us through for at least a little while and I didn’t need to spend too much money to get it to this point. Now, I’d love to know what you think. Do you think black was a good choice? Have you ever found yourself tweaking a design indefinitely?