Something for the Weekend – August 2015

I always thought August was supposed to be a bit of a chilled out month. Ya know, those last lazy days of summer that you want to take advantage of and really just soak up the last true bit of sunshine, relaxed out in nature with a cold drink in hand. Except my August wasn’t anything like that at all. Firstly, I’ve secured two new clients and a third which is still being negotiated – which I’m thrilled about for sure, but it made for a busier month with emails and plans and Skype conversations just to get the ball rolling on the work ahead.

Secondly, (WARNING!! MOAN ALERT) the weather once again has just been shocking. I can’t believe we’re in September and it feels as though summer here in the North West never truly got off the ground. It’s been rainy and temperatures have been lower than normal and it’s been pretty miserable and overcast most of the time with just the odd day here and there of sunshine and warm temperatures. I’m thankful we were able to get to Menorca for a week of what I would consider real summer weather – hot temps and full blast sun – because otherwise, I would have felt royally ripped off. Well, to be fair, I do feel ripped off. At least everything is very green so I suppose there is that plus. 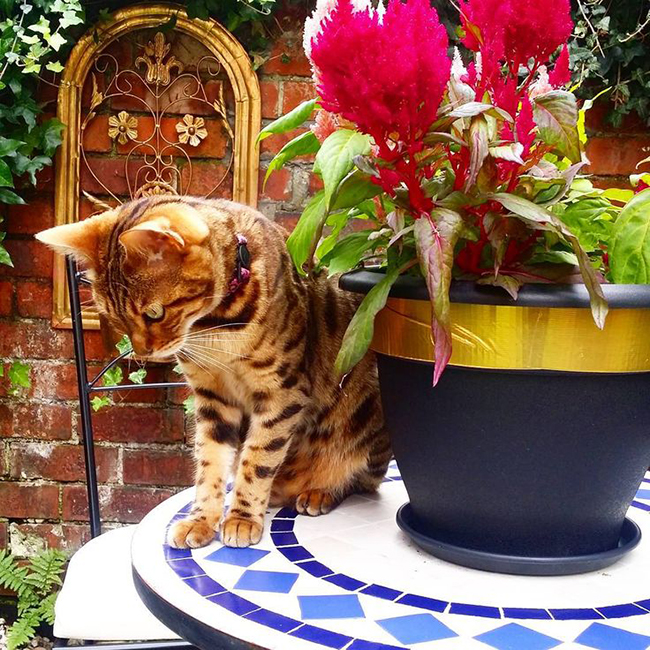 Ignore the bad taping job on that pot – LOOK A PRETTY CAT! ;)

Our back garden makeover project is nearly finished but I’m disappointed that I’ll be sharing it with you this month, rather than the middle of summer which is what I’d planned. It’s a bit late to share a garden makeover, don’t you think? Whoops. But we’ve been battling the less-than-ideal weather alongside a busy summer schedule and so things just don’t always go the way you planned and I still want to share what we were able to do so that’s forging ahead. We have been able to enjoy it a little however which I suppose is what counts although not nearly as much as I’d wanted to. I mean, I walked the dog last night in my winter coat because it was cold and had just finished chucking it down with rain all day. I know this is all #firstworldproblems but STILL. WAAAAH. *insert ugly cry face*

Anyway, I didn’t come here to have a whinge (although I sort of just did, I hope you forgive me, things aren’t always lollipops and rainbows in life so sometimes you have to get it off your chest). I did however want to share some of the things going on that were actually quite great this month.

First off, my wallpapered chest of drawers was featured in a round up of DIY projects in The Irish Independent, one of Ireland’s biggest national newspapers, within their weekend pull out magazine so I wanted to share this quick shot with you! 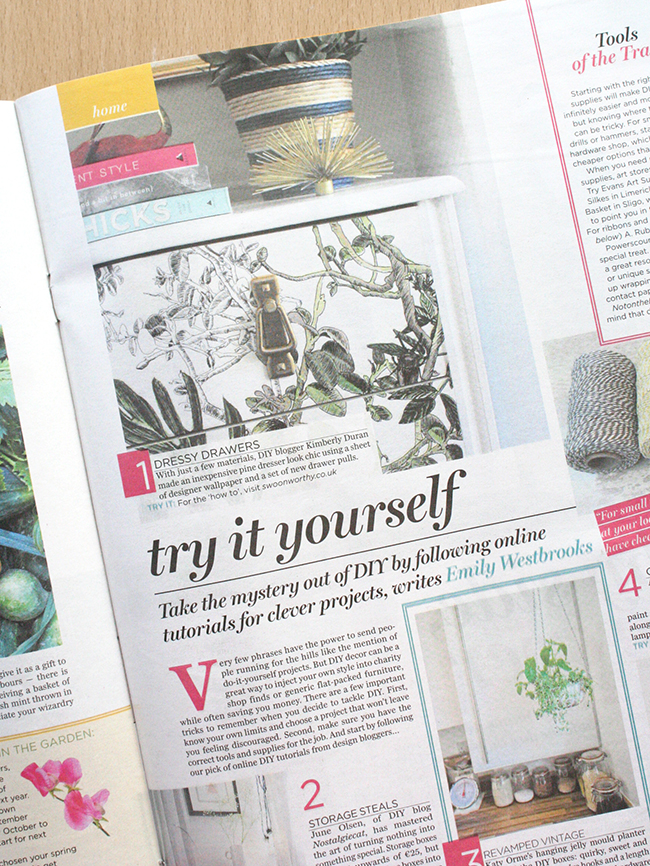 You can see more of this project and a how-to here.

Such a privilege to be alongside some other really talented DIY bloggers and friends like Alex from The Interior DIYer (who sent me these photos as a Dublin-dweller! Thank you Alex!!),  June from Nostalgiecat and Katy from Apartment Apothecary – all of whom you should totally check out because they are all utterly fab and lovely people, having had the chance to meet all these girls at one time or another. 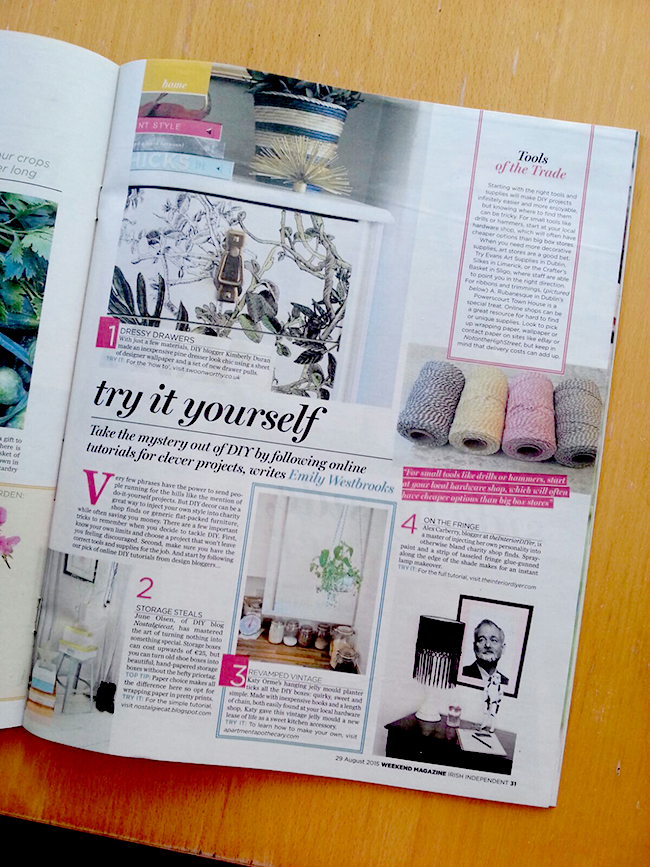 Speaking of appearing in print, if you are in Germany, I will also be in this month’s Petra Magazine! Coincidentally, I’m actually off to Munich for a couple of days next week for some exciting happenings – unrelated to this feature – which I haven’t yet shared with you (soon though!) but I’ll actually be able to pick up a copy for myself whilst I’m there which I’m looking forward to as they don’t sell it here in the UK as far as I’m aware. But it just so happened to coordinate with my visit – yay! However, if you are in Germany, I believe it comes out on the 8th September so keep a look out for that! I’ll scan it once it’s out and share with you in next month’s roundup.

I was also among lots of fabulous interior design experts in Industville’s post talking about top tips for interior lighting – there are so many experts that weighed in so it makes for great reading if you are considering how to include lighting in your own home. 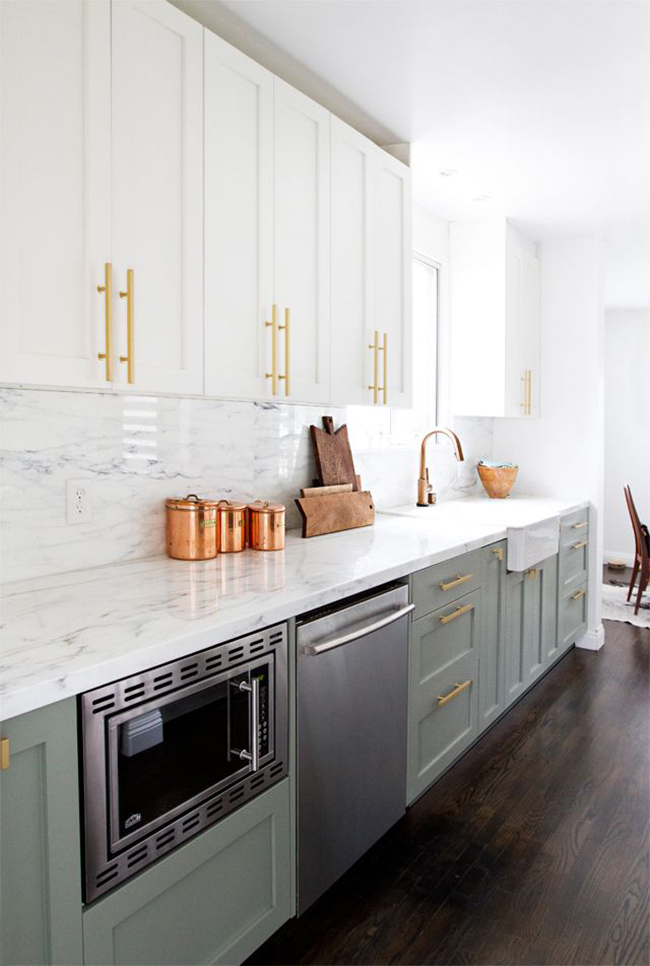 And just one last thing before I get into the blog posts I’ve been writing this past month… I hate begging for votes but it’s sort of the last push for the Amara Interior Blog Awards where I’ve been nominated in the DIY category for the second year in a row. Last year, I made it to the final 5 shortlist which was SUCH a massive privilege and opened so many doors for me. I would be so incredibly grateful if you wouldn’t mind voting for me to make that privileged spot again this year. The competition is even tougher, the criteria more challenging and genuinely, every single vote counts at this stage. I would be so SO grateful if you could click this little button and vote for me – it only takes a minute, I promise! So why not just go ahead and click now? *big smile* 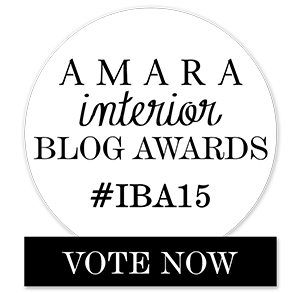 And if you’ve already voted for me, a MASSIVE THANK YOU!! Truly, it means the world to me to have your support.

Moving on to my posts for the month! I create so many advice and how to articles that obviously do not sit on Swoon Worthy that I thought you might like to have a read when you are relaxing and killing some time! You can click on any of the links and they’ll open in new windows so you can click on them and go back to them if you like ;)

Over on AO Life, I talked about 10 Ideas for Kitchen Backsplashes. 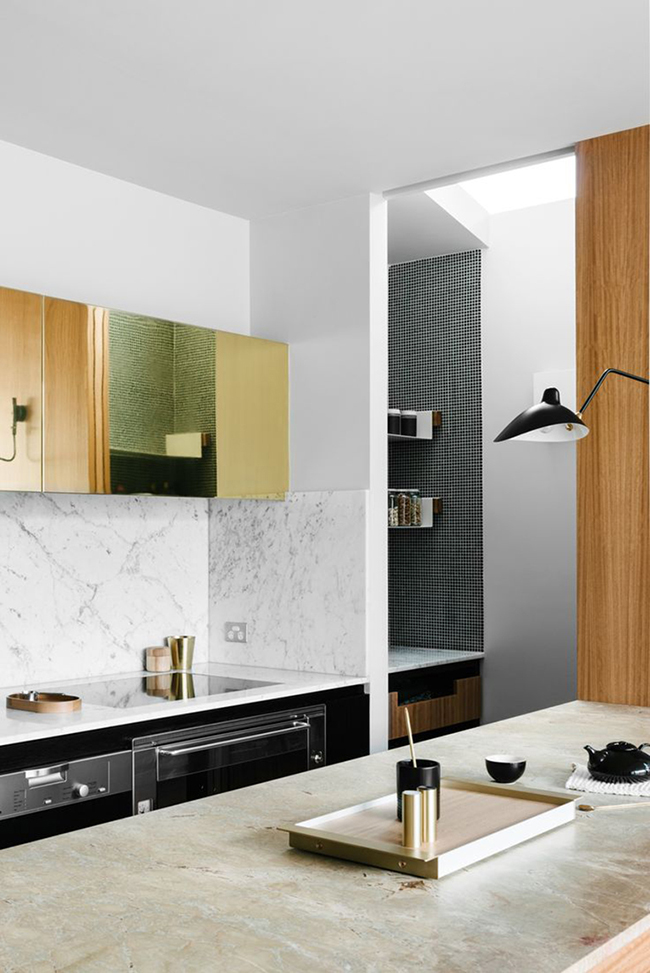 The truth is, I’ve been reconsidering my own backsplash and whether I want to keep the subway tiles – I know, I know, I’m insane and it’ll create a much bigger job to redo the tiles but well, I can’t help myself. They already need to be messed with because we never installed tile trim and we need to install new worktops so why not just give the kitchen a fresh look whilst we’re ripping the thing apart anyway? ;)

I also did a little buying guide on AO to get the look of a certain very popular baking programme that’s going on right now but then I was told I couldn’t actually mention said programme in the article. Ahem. But I can talk about it here – The Great British Bakeoff!! OH YEAH. 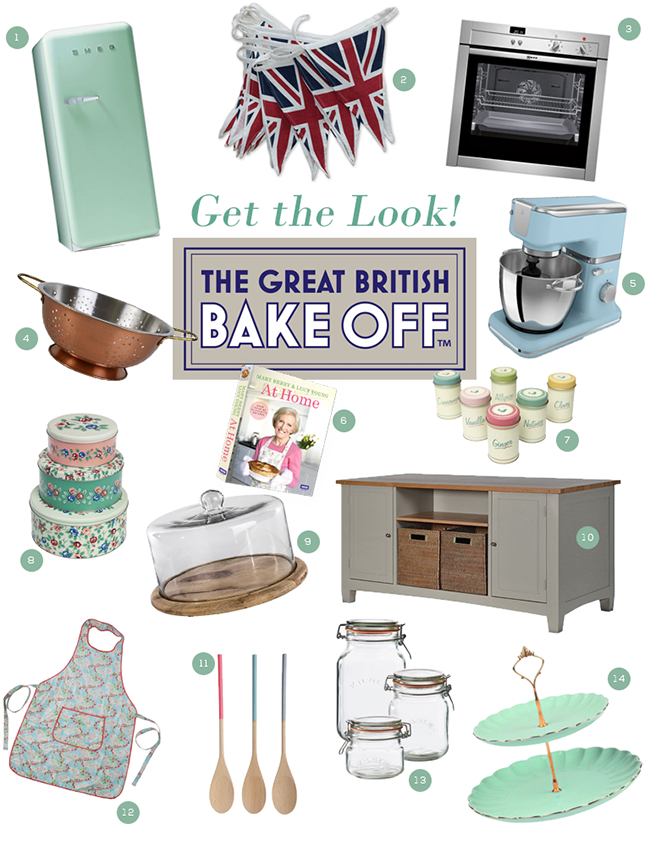 For those overseas, I realise this will mean nothing to you but it’s basically a baking competition that grips the entire nation – me and Wayne included!! – for a few weeks every late summer/early autumn. And yes it is SO GOOD I CAN’T EVEN. (That sounds insane when I write it out but trust me on this one. It’s brilliant.) And for my UK readers, who are you tipping to win? Is Ian a sure thing? I reckon Tamal has it in him to steal the crown personally. I love Fiona as well – she’s just so talented, I’d love her in the final! Okay, if I don’t shut up about this, the whole post will be talking about GBBO so yeah… ahem. Moving on.

Over on Lighting Majestic’s blog, I shared my tips on How to Style a Sideboard or Console Table. I’m talking about both assymetrical as well as symmetrical displays, why you need to vary things like scale and texture in your vignette and how to create a display that tells the story of you. 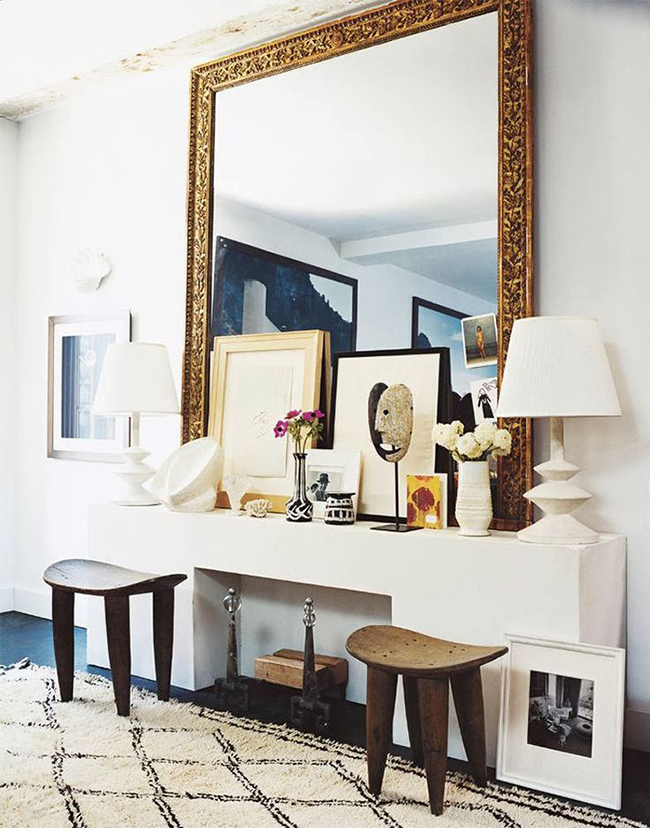 Over on Tile Mountain, I talked about How to Get a Moroccan Look in Your Home. Marrakesh is one of those places that’s on my ‘must visit’ list and has been for some time. Not sure when I’ll be able to make that dream a reality but when looking at inspirational images like this one, I’m all like I NEED TO BE THERE RIGHT NOW. 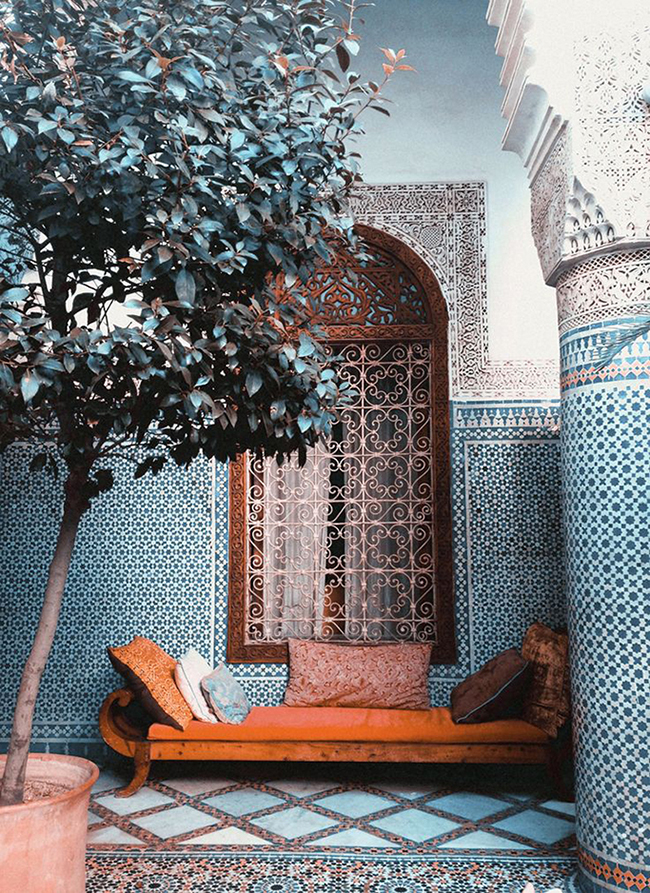 I also talked about Tile Inspiration for Fireplaces. It’s one thing we’ve been considering with our unfortunately defunct fireplaces – to reinstate them and surround them with some beautiful tiles. 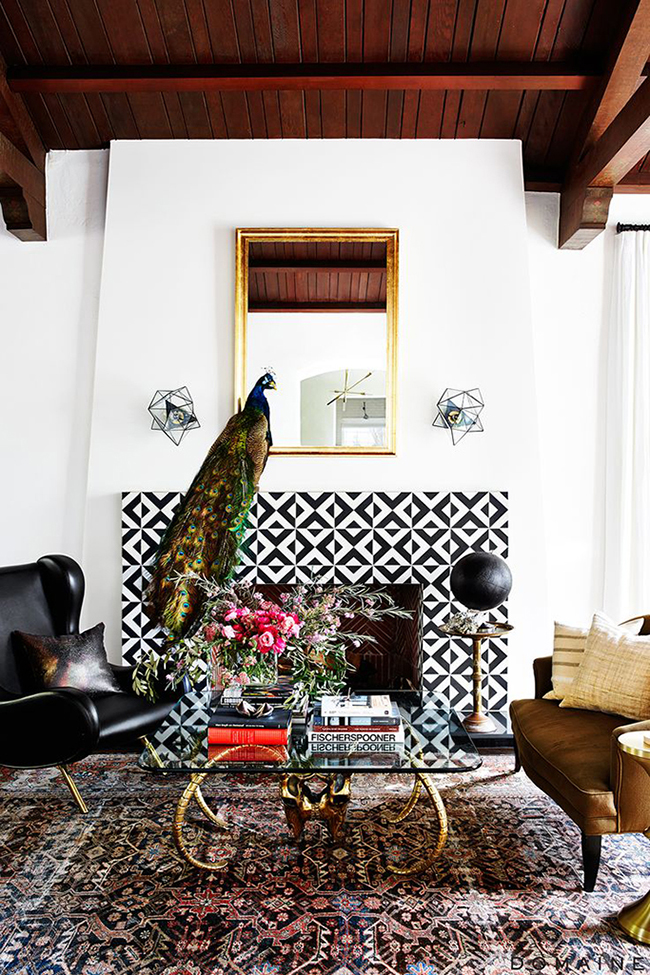 I ADORE the living room above – it’s just so sexy and eclectic. Yum yum. But I do share lots of different styles over there so it’s worth checking out if you’re considering it for your own home!

I also did a number of posts over on Oak Furnitureland and SofaStore as usual but I think they are a bit behind their schedule at the moment so you’ll have to wait until next month to check those out! As I’ve mentioned, I’ve also got 2 (possibly 3!) new clients I’m writing for so I’ll be looking forward to sharing those with you soon.

So tell me, are you up to anything exciting this weekend? Are you watching GBBO too? Are you sad to see the end of summer or are you looking forward to jumpers and jeans and knee high boots again? I’d love to hear from you!