I know for all intents and purposes, the kitchen as it is right now is functional – no, not DONE per se, but functional in that it’s definitely in a ‘useable condition’. In pictures, it looks more ‘done’ than it actually is but that’s the nature of photography sometimes – things look bigger, brighter, better than they do in real life and those little niggly details don’t come to the fore quite as much. But there’s actually quite a few things about my kitchen that you might not know. And I’m ready to come clean and confess the sins my kitchen is committing against me.

Now those who are the beady-eyed professionals may have clocked at least one thing that looks like hell and that is captured in virtually every picture I’ve shown here: There’s a big gap between where the laminate countertop ends and the tiles begin. 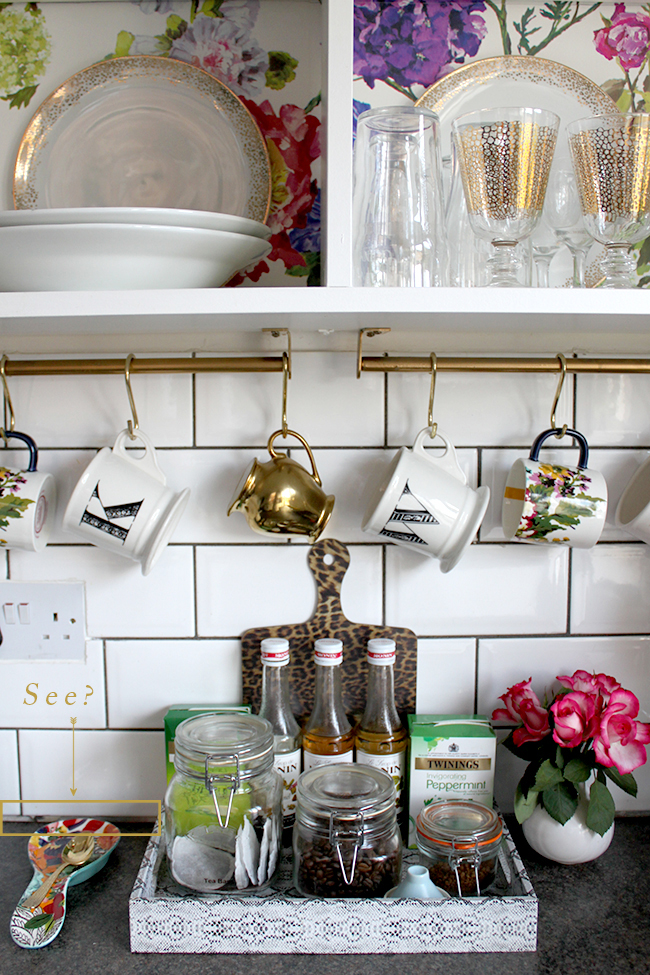 There’s a reason for that. The cabinets need to be raised about 2 cm for various reasons – but mostly so that they align better with our appliances. Yes, whomever originally installed these cupboards installed them too low (and no, it wasn’t us, we kept the layout exactly as is in our remodel). This means that our washing machine fits so tightly under the cabinets, I feared the countertops would split when we shoved it underneath. It also means our free-standing cooker looks a bit awkward, towering over the worktops. 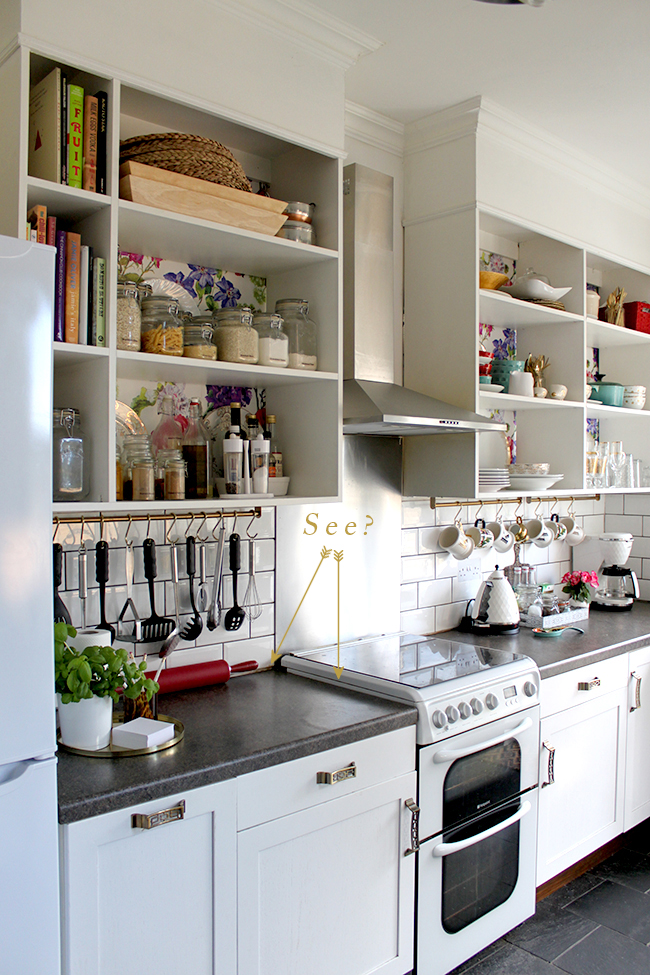 It’s a relatively easy adjustment to make thankfully. There is some play in terms of the fixings so raising them is not a big job but we’ve been waiting for ME to decide on a worktop material so that when we installed new worktops, we would raise the cabinets at the same time.

Once we did that, the countertops can be sealed to the tiles, eliminating that unsightly gap you now see.

The second thing is that we’ve actually messed up in a couple of places. Yes, I’m woman enough to admit that. And we’re going to have to rectify those mistakes because at the moment, they really annoy me.

Mistake #1 – We forgot to install tile trim. This is really a pretty shit rookie mistake but you need some kind of trim at the top and sides of where your tiles end so you don’t have a rough crappy looking edge like we have going on right now. There are a few not-ideal ways of dealing with this (digging out grout and retrofitting them is one way, removing all the top tiles and resetting them again with the tile edge is another). But I think we’re going to have to bite the bullet regardless. 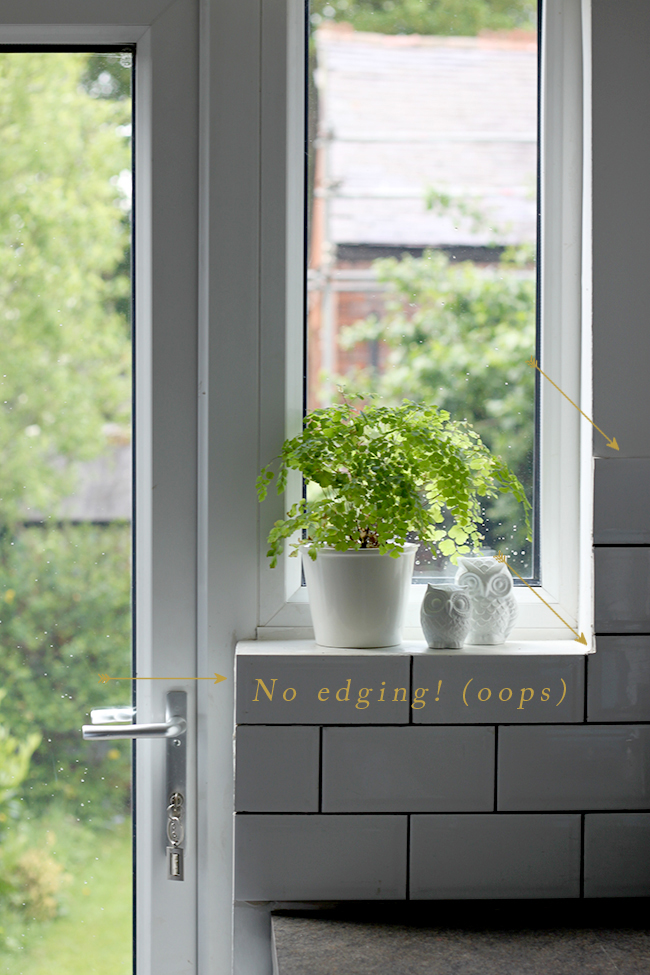 This is what I REALLY REALLY WANT. Oh yes, Emily Henderson, you goddess of detail you. 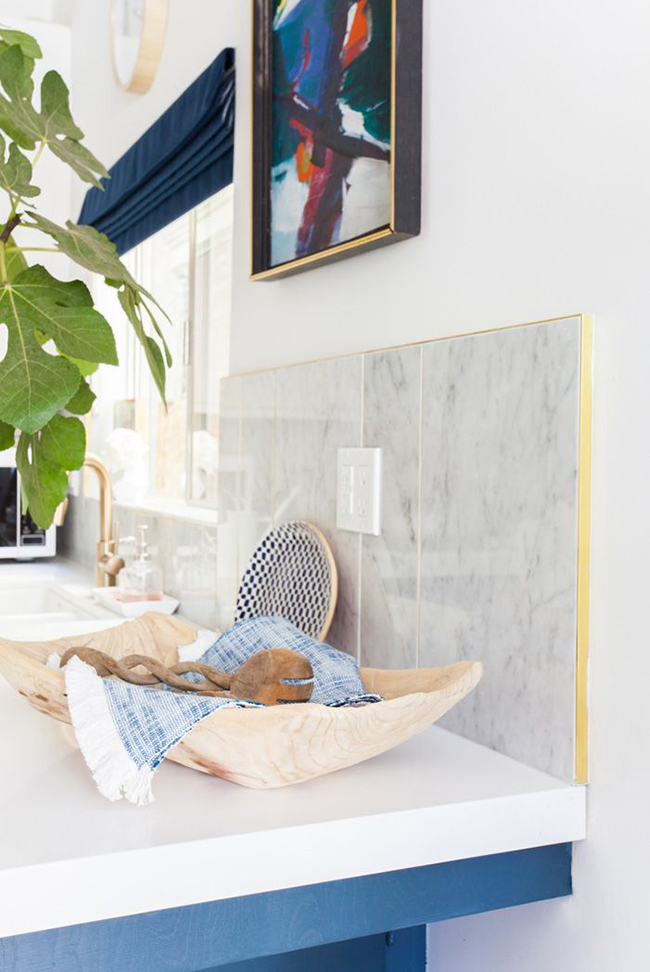 So however we do it, I really want to install brass trim around all those edges. Yes, it’ll be a bit of work but we need to do a bit more tiling regardless (I’m getting to that in a bit) so we might as well do it right.

Mistake #2 – I miscalculated when I measured up for the toe kick (that bit of wood underneath the cabinets that just hides the gap between the cupboard and the floor). The long straight lines were not too far off but the corners got me all messed up and I realised a few of the boards were actually cut too short. So we have gaps where the toe kicks don’t meet and while it’s not something you really notice, Meisha loves to stick her paws behind them and pull them out. Yes, she CONSTANTLY is pulling off the toe kicks in our kitchen – she’s done it since she was a kitten and she clearly finds it jolly good fun. So this needs to be addressed and fixed.

(Side question: Does anyone else’s cats do this? Or is Meisha just completely and utterly bonkers as we suspect?)

We had a burst pipe/gutter thingie on the outside of the house (no idea what they are called) last year and we ended up with some water damage where the paint peeled/bubbled off the walls. It’s all fixed now on the outside but we still haven’t repaired the walls. In fact, it’s been a few years since we last painted the kitchen and it really just needs to be painted again anyway. (sigh)

And then there’s this corner next to the counters on the sink side of the kitchen. There is just a weird blank space where the rubbish bin and the cat feeding station live (I didn’t think you fancied seeing a couple of bowls of half-eaten kitty dinner so it’s unseen here – you’re welcome). In desperation about 6 months ago, I framed some of the leftover wallpaper from the back of the shelving units and stuck them up on existing nails. It was supposed to be temporary (HA!) but here it remains. I just looks half-assed (because it was). 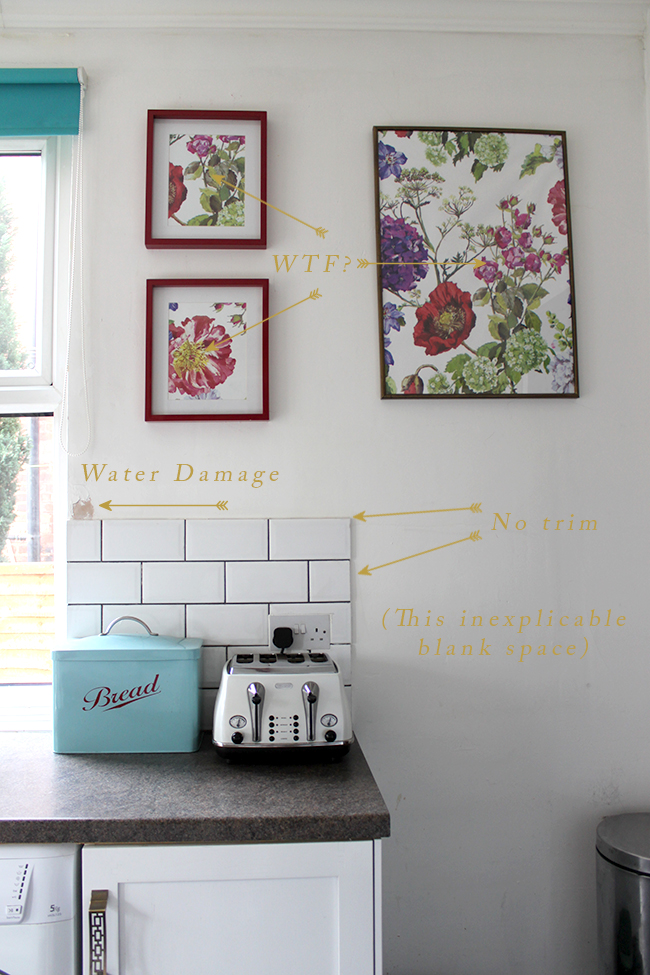 I want some proper art up there, some kind of pot hanger/shelf thingie system on the wall and I want to extend the tiles along that wall to the floor to at least make it look sort of purposeful. Another rookie error I think, stopping the tiles at the cupboards. It just looks stupid and unfinished. I know this now.

I also want to replace the crappy rolling blind we have there now. I mean, it adds a shot of colour but as I’m sort of getting away from all the turquoise in here, I want to put a wood blind in there and create a pelmet similar to what I did in the dressing room. Speaking of the turquoise, I also think it’s time for the big wall clock to move over for something a little less ‘country’ in style (‘time for it to go’! Ha! Get it? I kill me.)

And of course, as I banged on about in my last post about the kitchen, the cooker hood and backsplash needed an upgrade – and happily, that’s actually happened (!!) and it’s already looking so much brighter but you’ll have to wait until Wednesday to see it! I know, I’m cruel. But I’m also going to be sharing some of the bigger things that are gonna be happening in here so I promise it’ll be worth the wait.

I can get on with some of the little things (replacing the roller blind, replacing the clock, replacing the lighting etc.) but the big stuff (tiling, trim work, repainting, worktops) is going to have to wait as we crack on with the guest bedroom/office remodel as Wayne will be tied up with that for at least a few months.

Anyway, as I said, this is going to be the year the kitchen gets some attention and I have no intention of yet another year passing without getting on with it.

So tell me, is there anything that frustrates you about your kitchen? Do tell, it’ll make me feel better.