This post is going to make it look as though we got loads done on our bathroom but the reality is, that tiling is a pretty instant-gratification type process.

To think about all the work that went on in the past 6 weeks with the ceiling, the plumbing and the wall preparations that just don’t give you the wow-factor and then spending a few hours slapping some tiles on the wall and going OH WOW IT LOOKS LIKE A BATHROOM… it’s just the way with certain things… 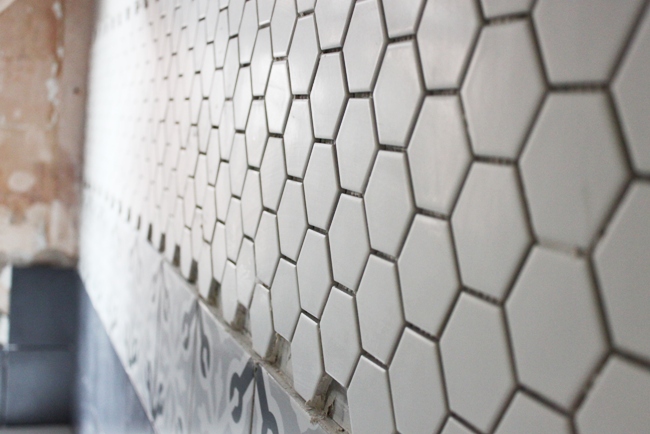 So this weekend, we decided to get some more tiles on the wall.  We were only able to do one full wall and most of a second because we ran out of tile adhesive and by that time, it was about 4:30pm and we were both a bit knackered from stressful weeks.  So that’s what I’m going to share with you but I hope you like it regardless.

Now, I’ve loved hexagon tiles for a while now – that honeycomb pattern adds such a graphic element to a space.  And they were a BREEZE to put up.  Wayne said afterwards that every bathroom we do in the future has to include hex tiles because he found them so simple to install! ;) 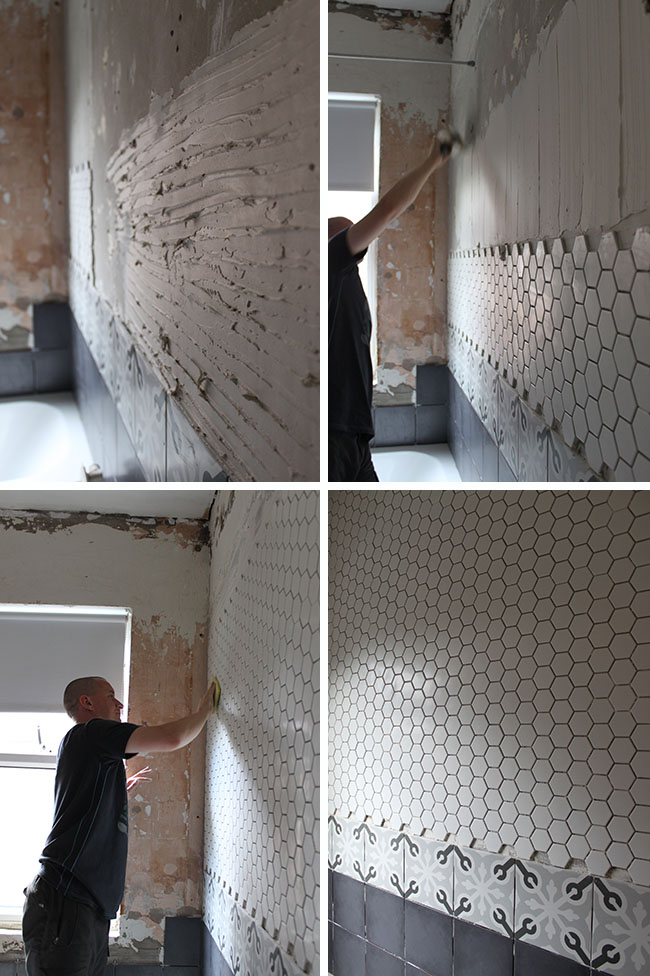 As you can see, we also put up a border of the Fired Earth decorative tile that matches the floor tiles along this wall to tie the scheme together.  The radiator has yet to be painted to blend in with the tiles obviously. 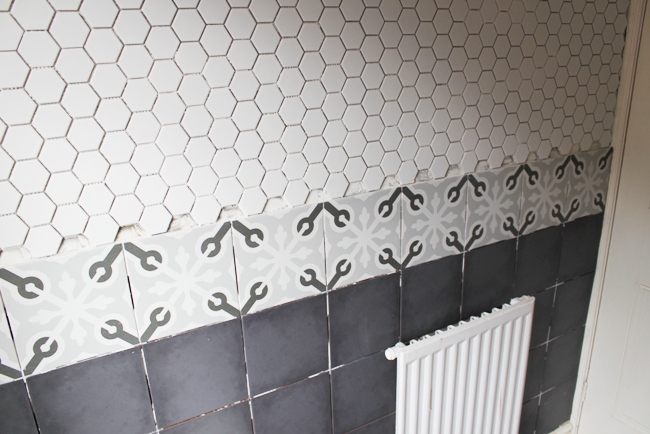 After this wall was complete, we moved on to tiling the wall where the door is. 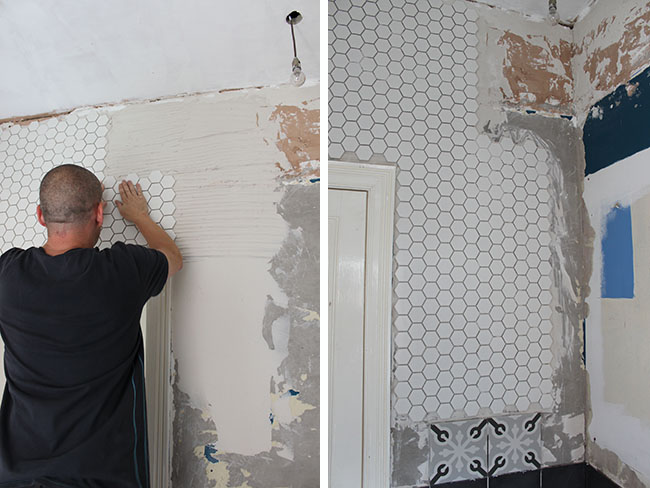 It’s obviously not done and there will be a lot of tile cutting that we’ll have to do to fill in where we couldn’t put a whole hexagon tile and everything still needs grouting (including the floors) but we just wanted to get something up there so we didn’t have to keep looking at bare walls!

You can see how it pulls everything together with the flooring… 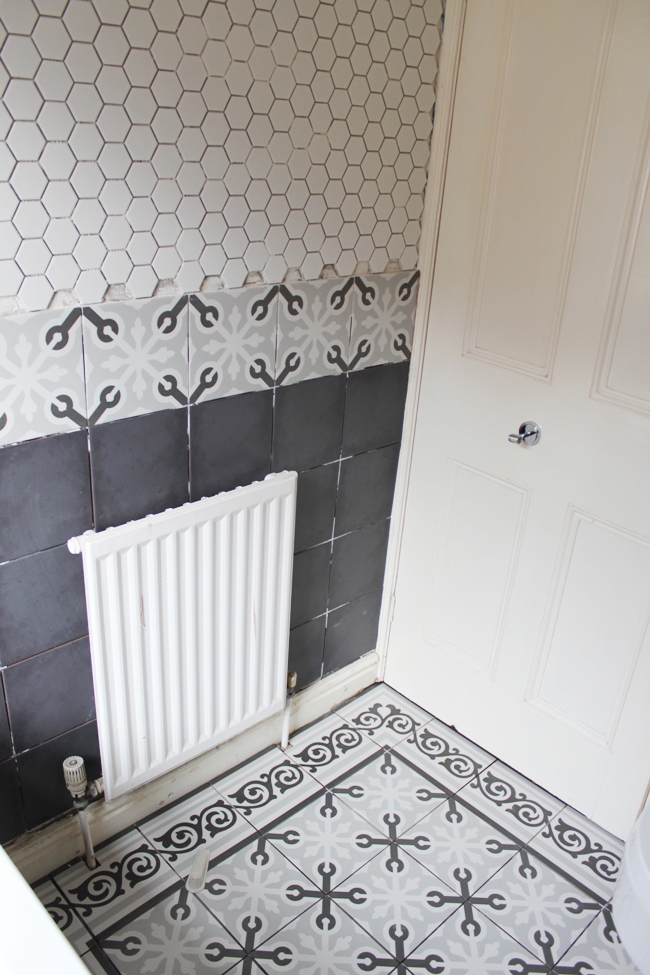 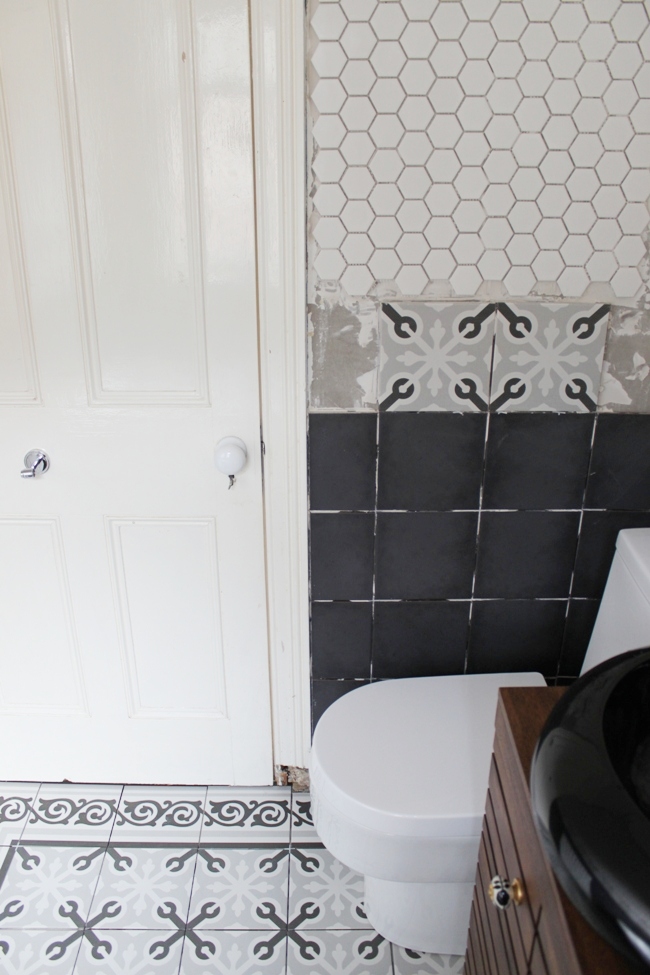 The hex tiles were purchased from eBay.  I struggled to find hex tiles in this size and in white but found that this seller had loads and they were a reasonable price (which was necessary as we ordered A LOT of them).  They come as a 30cm x 30cm mosaic so the whole process was very fast!  (Of course, cutting all those tiny pieces to fit into the gaps won’t be as much fun but let’s concentrate on the positives, right?)

I love the pattern and I’ve debated using a black grout to make them really stand out but I think it might be just that bit too much.  So I’ve decided to use a light grey grout instead so that you can still see the pattern but its not as stark as what you can see here. 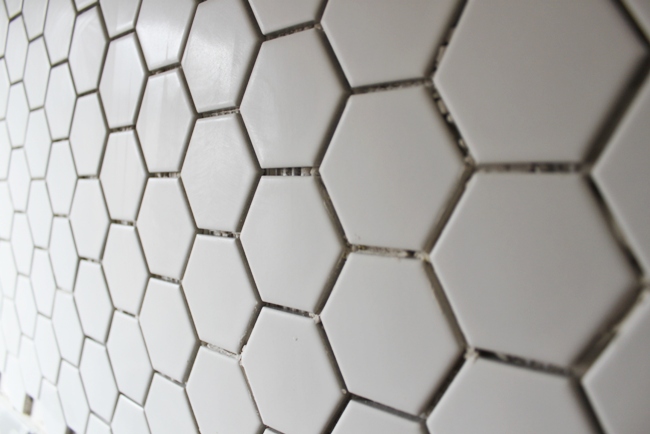 So those were our tiling adventures this weekend!  Do you love a good hex tile as much as I do?