Operation: Rast is complete!  Hurrah!  So for those of you who had guessed when I bought my Ikea Rasts that I’d go for campaign style, you get a gold star and a cookie!  ;)

I played with a few ideas – Dorothy Draper Espana Bunching and Overlays were two considerations in the running but in the end, the ease with which I could get materials for a Campaign Style won out in the end.  I’m impatient, what can I say. 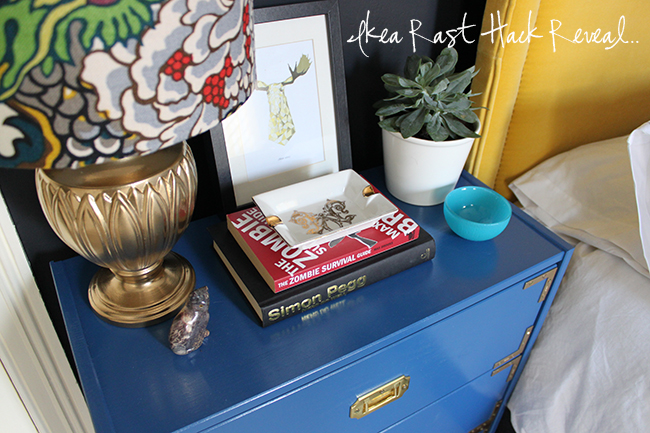 What I hadn’t fully decided on however, was the colour.  My original plans were to go for white – versatile, timeless – it made complete sense.  And yet, white seemed so SAFE.  I was already compromising on my dreams of something fabulous and vintage in getting the IKEA Rast anyway – did I want to go the safe route again?  Hell no.

So I decided on a whim to go with something a little more daring.  And honestly, I couldn’t be more pleased how they came out. 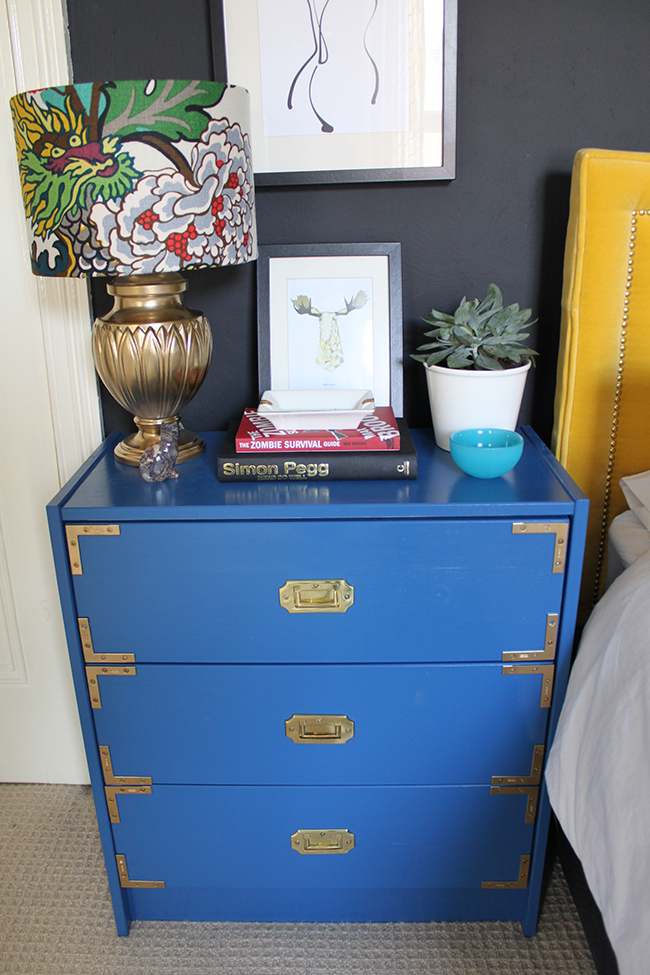 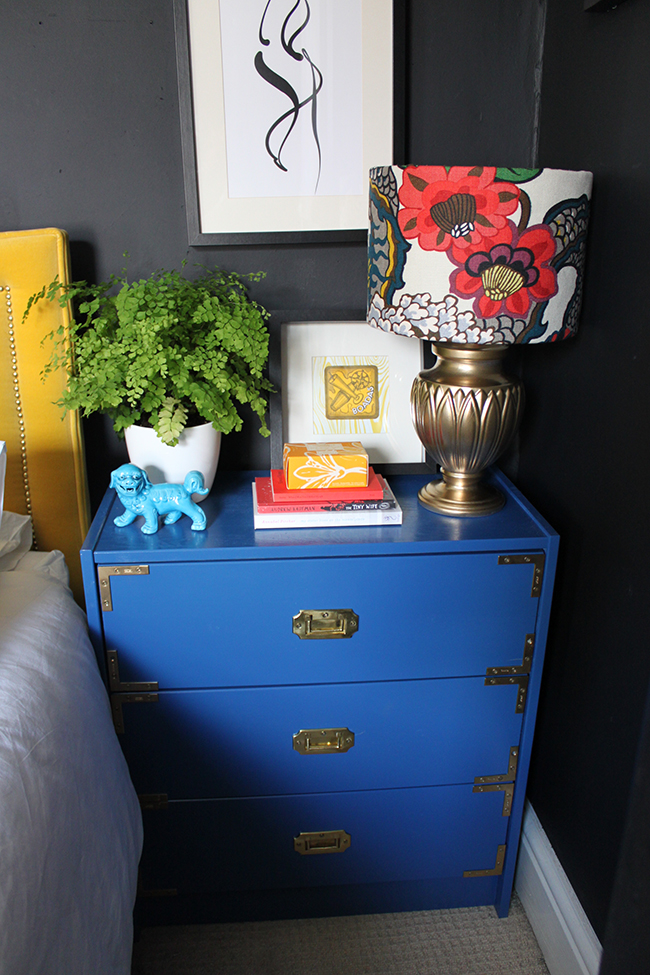 Now, I know having bright blue dressers with a yellow headboard won’t be to everyone’s tastes.  Serene, soft bedrooms seem to be the order of the day, everyone wanting a simple calming palette but ya know, I’m not one to go with the majority on anything that I do in my home and I’m the one who lives with it in the end so I threw caution to the wind and ordered a few cans of Montana White Monaco Blue glossy spray paint.  I never spray-painted furniture before believe it or not but with a coat of Rustoleum spray primer in Grey, a couple of coats of this, the whole project was done over a single weekend. 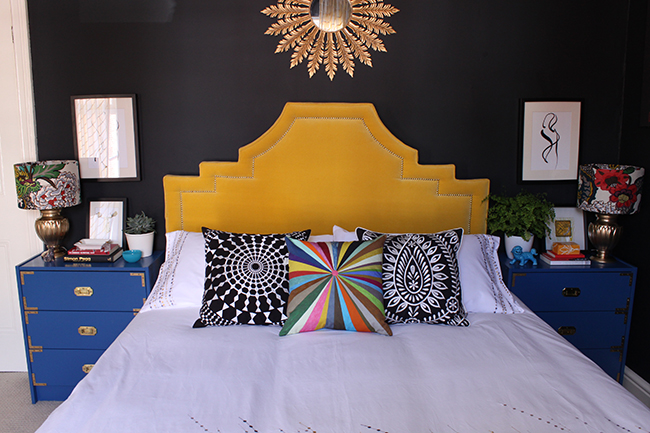 (For those of you wondering why I did it myself when I have Wayne who is a professional car sprayer at my disposal, if I had asked him to do it, I would have been waiting months.  The proverbial plumber’s wife with the leaky pipes, that’s me.  Did I mention I’m impatient?)

I had spied a few campaign handles online and cringed at the thought of spending £10-£15 per handle – the chests themselves were only £20 each after all!  So when I spied a deal on eBay for £10 for 6 of them, I jumped.  These lovely vintage brass handles were in my hands within a few days.  I think it’s worth noting that the handles I got were meant to be recessed so Wayne had to cut into the face of the drawers to fit them so that they worked properly (otherwise, I wouldn’t have been able to pull the handles out to open them).   Aside from that, it was just a matter of screwing the hardware on. 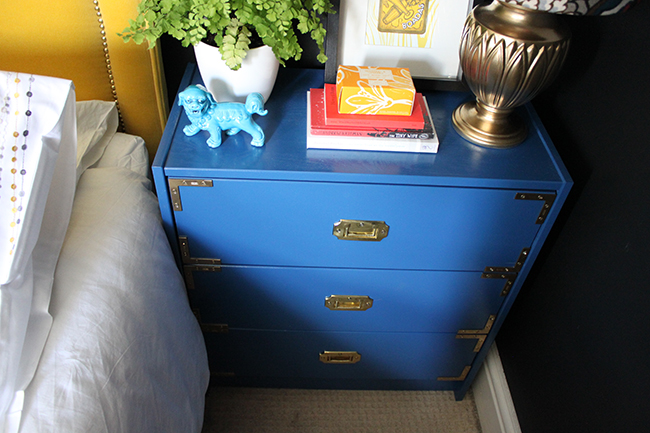 The corner braces were ordered online as well from Screwfit but when they came in, they weren’t really brass at all – well they were, but the colour was pretty awful.  It was obvious these were really meant as something that was functional rather than beautiful so I just took my Montana Gold Gold Chrome to them and the job was done – bright and brassy and shiny – oh yes.

(I know I sound like a walking advertisement for Montana spray paints but this isn’t a sponsored post, I paid for the spray paints and my opinions are entirely based upon  my experience but honestly, their products are fantastic.  Highly recommend them.  And Montana, if you are listening, you can totally send me free stuff, I wouldn’t mind.  *wink wink nudge nudge*) (Only joking!) (Not joking.)

The whole room looks so much more cohesive as well.  The artwork really pulls all the colours together (which is what I wanted from it) and the room looks bright and fresh even with the charcoal black walls. 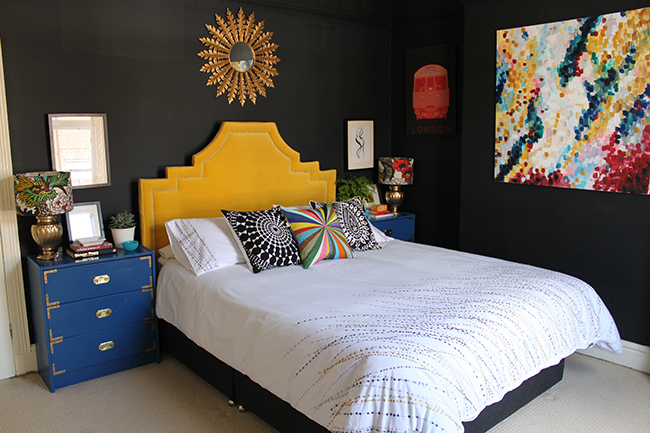 The only thing I’d like to do really is replace the ‘London’ ‘New York’ canvases with something else.  I’m thinking a small collection of prints or an oil painting or a big mirror somewhere in there.  I haven’t decided nor found anything I’m in love with yet and the colours work perfectly so I’m leaving them as is for now until I come across something that will work for the space.

And you might have noticed I’ve incorporated some plant life in the room.  I’m utterly obsessed with maidenhair ferns at the moment – I just love how soft and billowy they are.  I think I must have about 4 of them at the moment throughout the house. 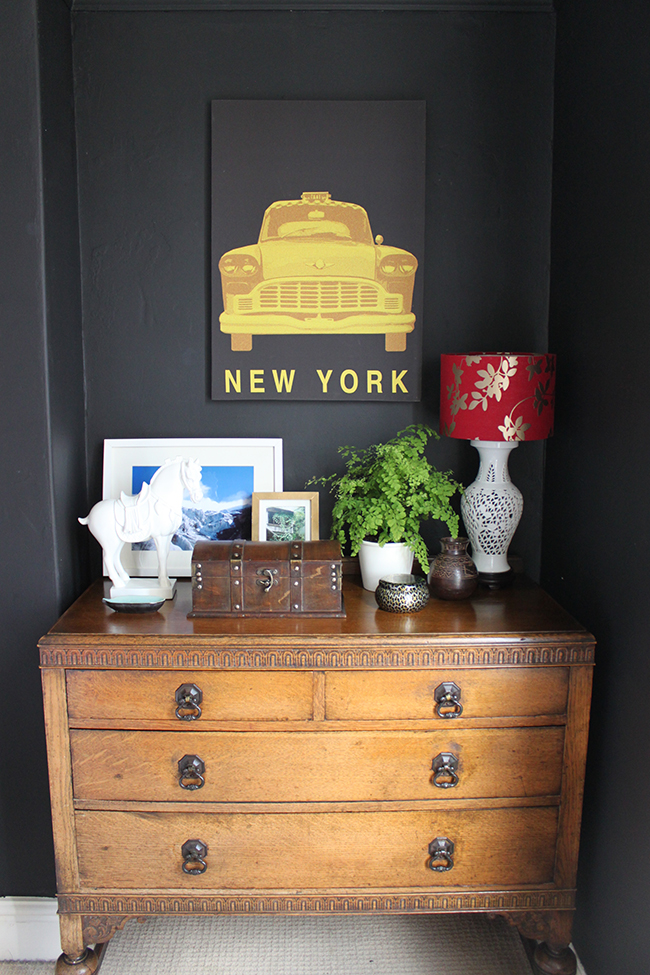 Styling the bedside tables was probably my favourite bit.  My old ones were far too small to get anything on them except for a lamp so actually having the opportunity to put a little personality on each side was a challenge I was happy to take.   Another Maidenhair fern and my walking foo dog… 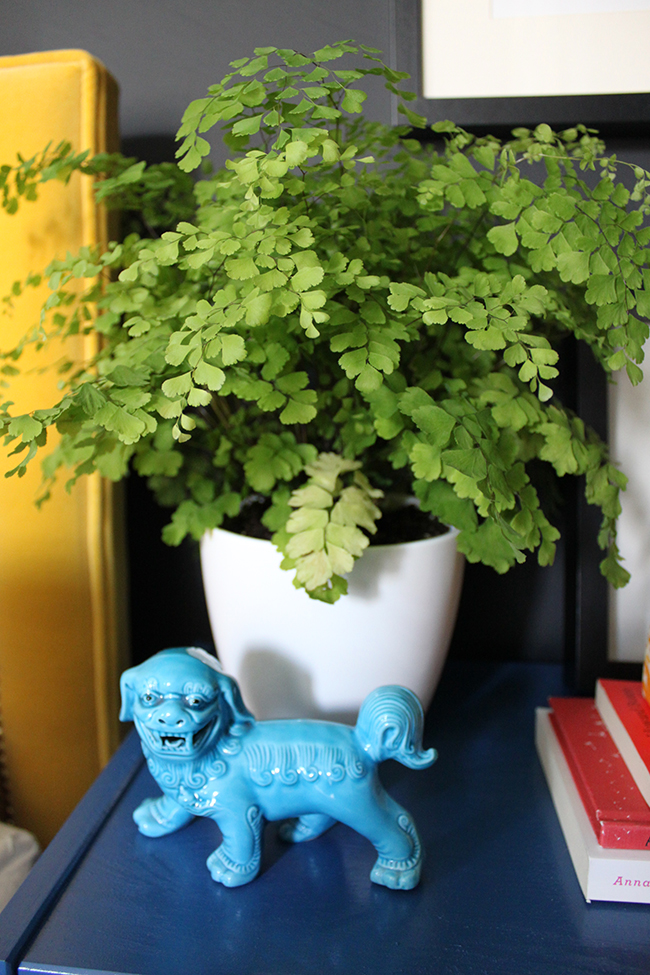 You can pretty much guess which is my side and which is Wayne’s.  To be fair, my side came together really quickly and I was immediately happy with the results.  I framed a coaster I got whilst we were in Barcelona so it brings back memories of a lovely holiday. 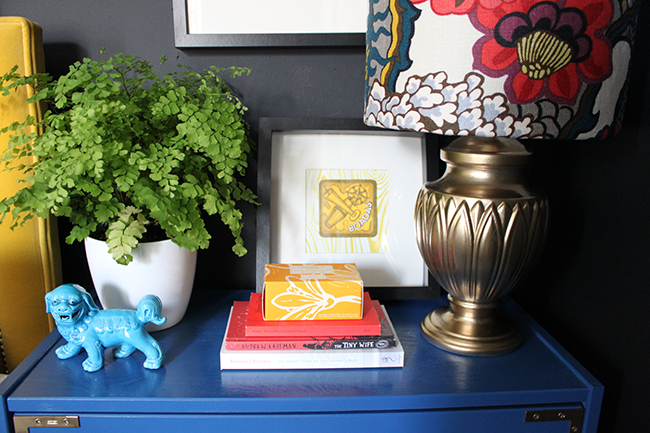 Wayne’s side took more time only because I wanted it to reflect him and make it a little masculine.  I’m not sure if this is the final look because there’s still something not quite right about it in my eyes but he liked it so that’s all that counts really.   I’m considering it a work-in-progress. 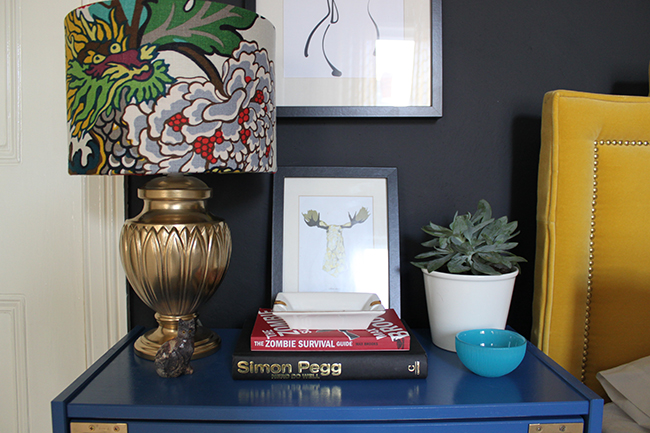 At least the artwork really ties the room so much better now. 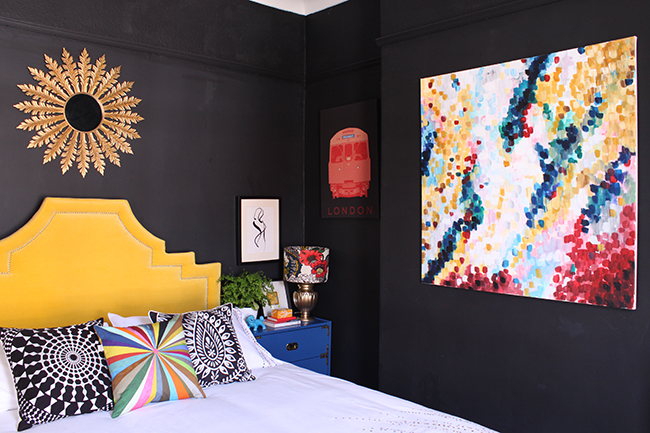 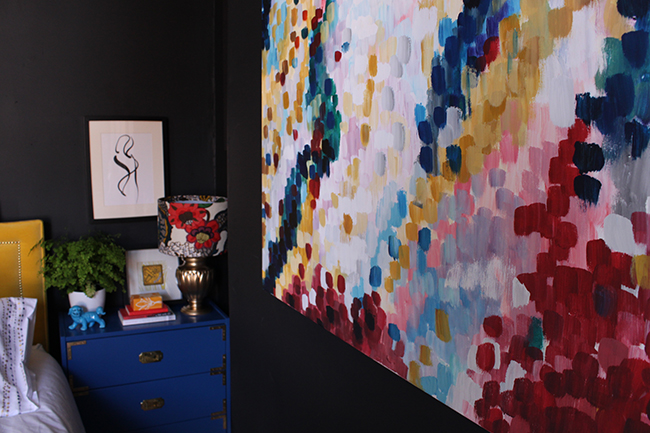 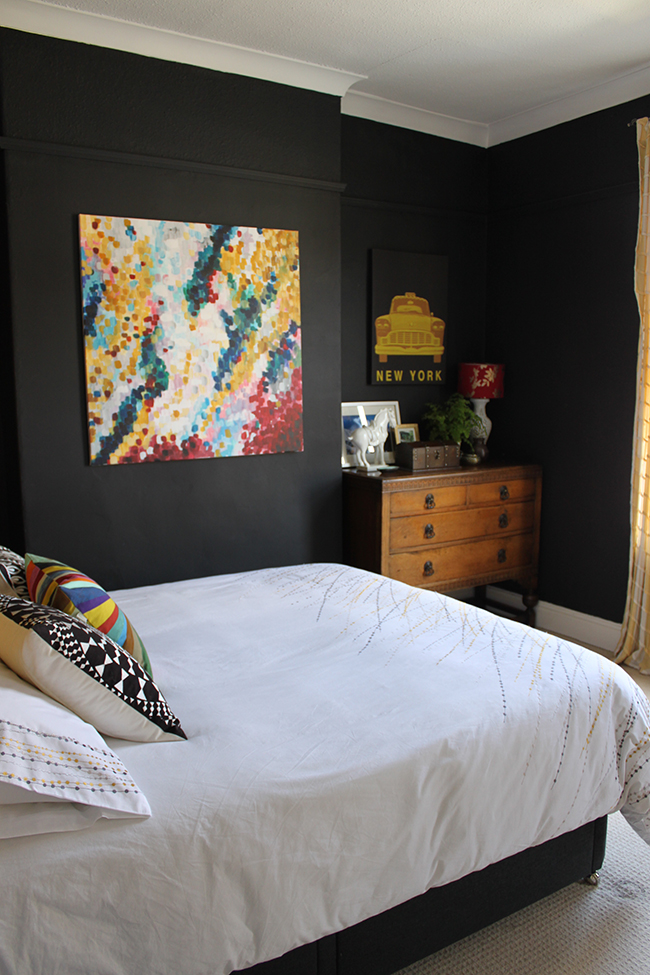 I found this picture from April 2012 – so only around a year ago and it was such a dramatic before and after that I had to share.  I know it takes me forever to do up a room but all the time taken to find the pieces of the puzzle are really worth it and not rushing into your decorating is so important.  I’ve said it before and I’ll say it again – 9 times out of 10, you’ll get a better room if you take your time rather than try to do it all at once. 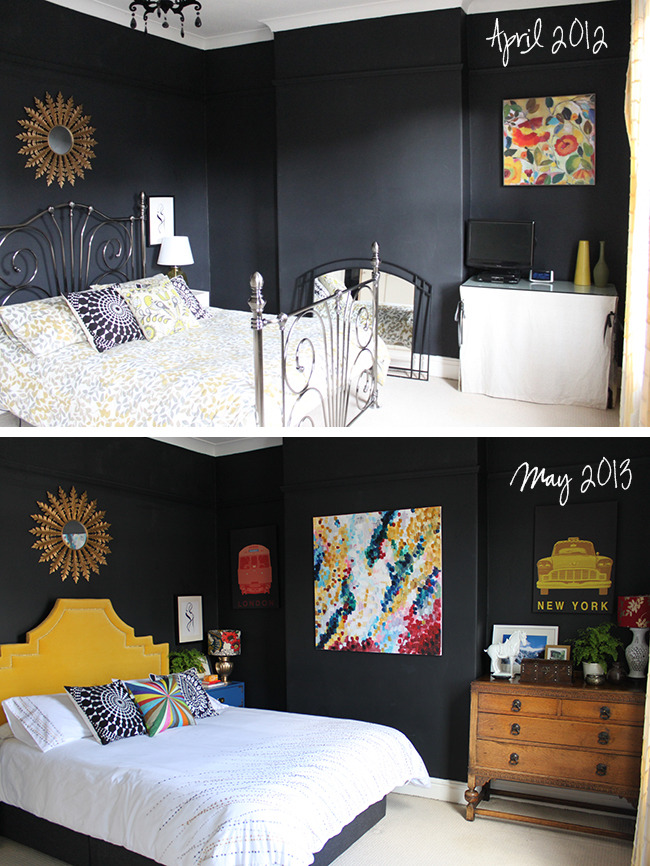 So that’s my reveal.  I hope the waiting was worth it!  What do you think of the colour choice?  Would you have gone with something different?  Attempt your own Rast Hack?  Want to share it?  Link/Share in the comments! 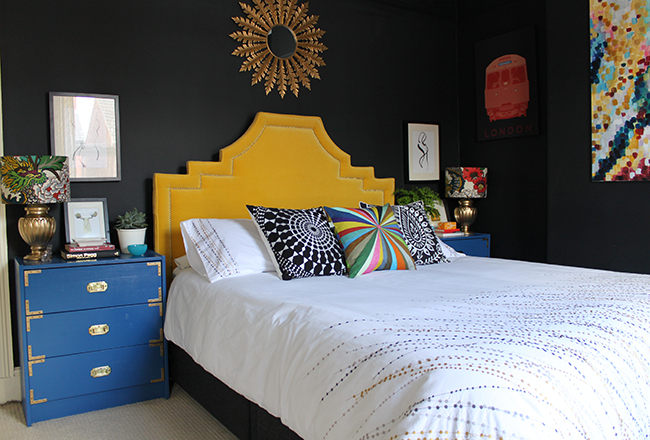 P.S.  I blogged about spraying the lamp bases here, gave a tutorial for covering the lampshades with fabric here and talked about my DIY art canvas here.  You can find links to my other bedroom projects on my house tour page.

PPS.  Whenever I post about my bedroom, I always get emails asking about the paint colour so I thought it was worth mentioning that it’s painted in Dulux Nightjewels 1 which is a fantastic, really rich paint that only took 2 coats.  You can find lots of the sources of stuff in my home on my ‘Where did you get that?’ page in the tabs above.