Progress Report: Channelling My Inner Nigella and Some New Bits for the Kitchen

I know it’s been ages since I’ve talked about the kitchen.  And no, it’s not done cuz ya know, that would just be crazy for us to actually, I dunno, FINISH a room.  However, there have been a couple small changes I figured I’d share with you.

One thing that we’d been looking to do for absolute ages, is replace the cooker.  The original one we had was left by the previous owners and wasn’t in the greatest shape.  Not just aesthetically (most of the numbers on the dials had been rubbed away and the whole thing was covered in an impenetrable film of grease that was impervious to any cleaning product on the market) but also functionally – the top didn’t spark properly so we always had to have a lighter handy and the oven temperatures were pretty much guessed at as they weren’t terribly accurate.

So finally, we bit the bullet and ordered a new one.  We decided to go with a white one because the stainless steel is a bitch to keep clean and also, I quite liked that it blended better with the white cupboards.  We also decided on a double oven and getting white kept the price down.  Even though I don’t talk about it much on this blog, we both love to cook and having two separate ovens was a definite must have. 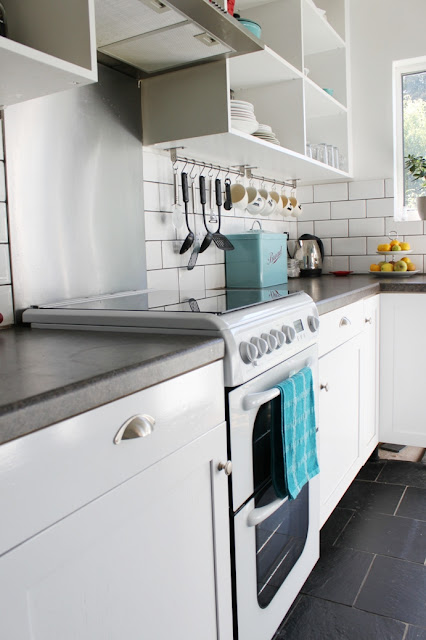 I also finally FINALLY replaced the old clock that was above the door.  I wanted something bigger and fresher and found this one at TK Maxx for a mere £16.  I love that it ties into the scheme with its soft turquoise colour. 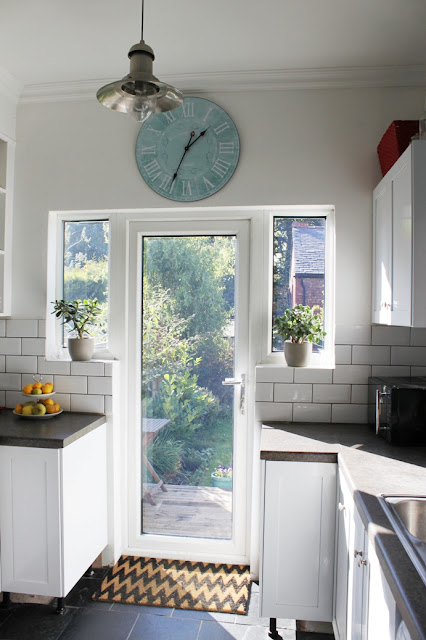 And, with the evenings drawing in so much faster, we decided we really had to get some kind of window treatment as our kitchen looks right into our neighbour’s kitchen (!).  This is a quick fix for now as I’d like something with a bit more pizazz but for a bright burst of colour as well as a bit of privacy, I couldn’t beat a brightly coloured roller blind.  I also just really like the word PIZAZZ. 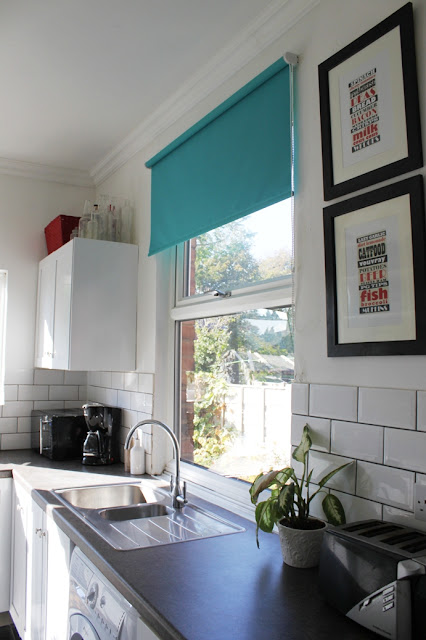 So, with those little additions, my kitchen is looking a bit brighter.  The gorgeous sunshine we had this weekend certainly didn’t hurt either.  I love crisp autumn sunshine, don’t you? 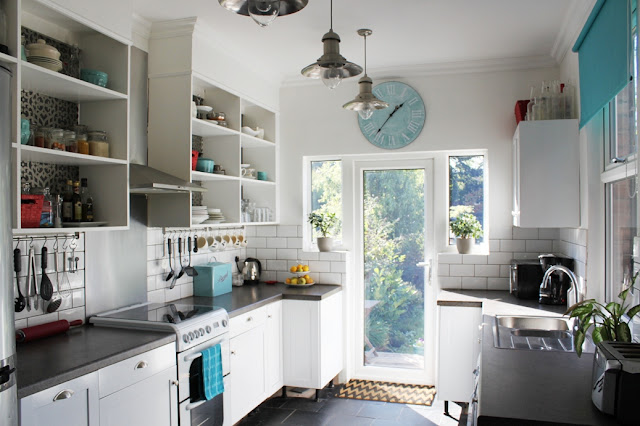 And if you are wondering what the old stuff looked like but can’t be arsed going through my archives, here are the before and afters.  I know, I’m so good to you, aren’t I? 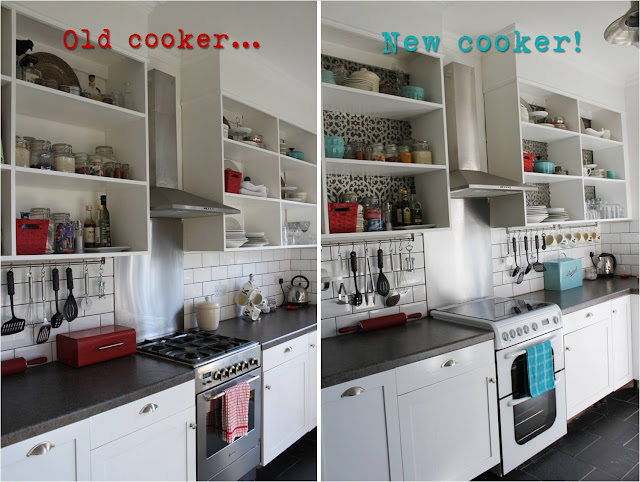 As you can see, the new cooker sits a bit higher than the old one.  It looked a bit funny to me when we first installed it but I suppose I’ve gotten used to it now.  Plus, it WORKS properly.  That’s gotta count for a lot really and the fact its a couple centimetres higher doesn’t bother me too much.  We use the two ovens all the time for everything from Sunday roasts to parma-ham wrapped stuffed chicken with roast vegetables.  Nom nom.

I also quite like the fact that it’s got a glass cover that lifts up when you are ready to get all Nigella in the kitchen.  I often like to lick the spoon all seductively when I’m stirring a sauce or something and then pretend to look into the camera with a smoldering look… “Mmmm that’s gooood.”  Don’t try to tell me you haven’t done that because I know you have. 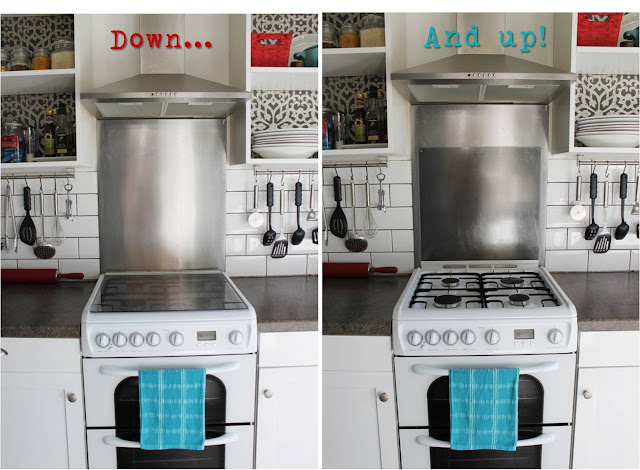 That’s not ALL that’s up when I’m channelling Nigella if ya know what I mean.  *wink wink*

Here’s the clock before and after… 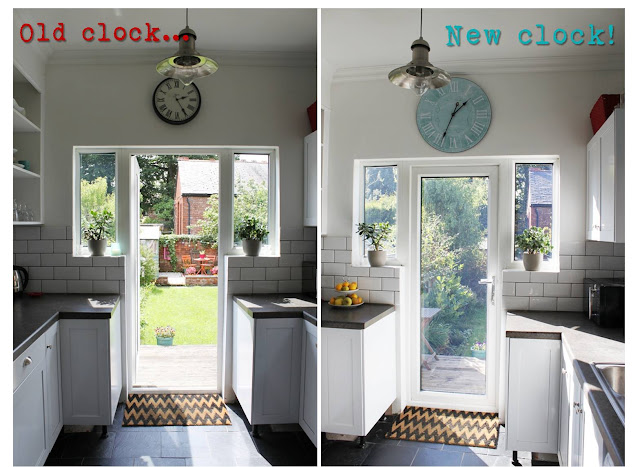 I always felt the old clock was just too small for the space ever since we raised the ceilings in here but hadn’t found anything that suited the space.  It was love at first sight when I found the new one and the price couldn’t be beaten!  You know me, always looking for a bargain. 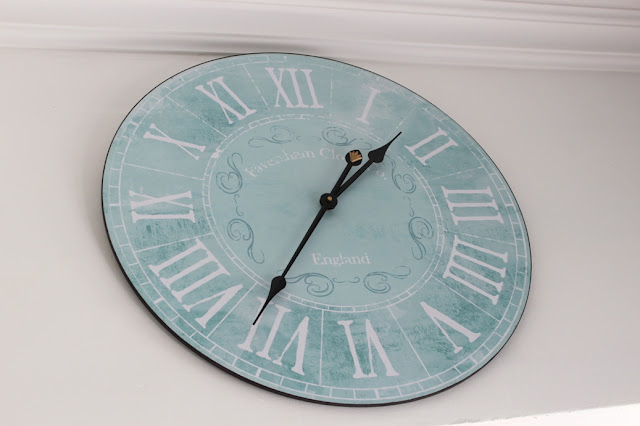 I also liked that it says ‘Faversham Clock Co.’ because I moved to Manchester from Kent so it’s a little reminder of my time down South (if you are from the UK, you have to pronounce that with a thick London accent, ‘DAN SOWF’).

So those are my little updates!  Have you made any little changes that have made a big difference?  Also have a double oven?  Any great recipes you want to share?  I’m all ears. 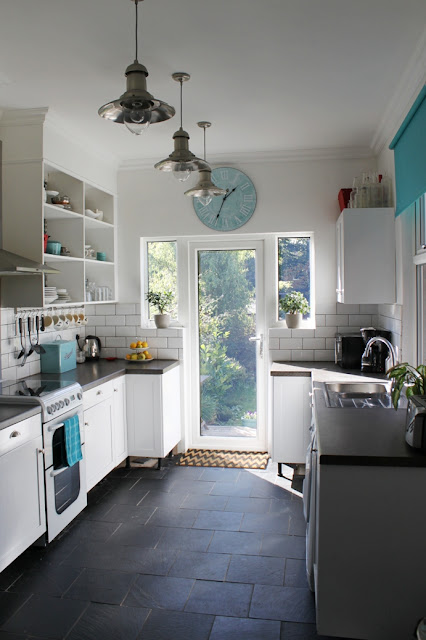 By the way, if you are new here (and if you are, how YOU doin’), you can read about my kitchen design influences here, discovering the hidden ceiling here, tearing it down here, putting up the plasterboard and pendants here, plastering here, putting in the cooker hood, the backsplash and tiling here and putting up the open shelving here, installing the crown molding and the risers here, finally painting the cupboards and replacing the hardware here and installing the underfloor heating and the slate floor tiles here and adding wallpaper to the back of the shelving units here.  Yeah, this has been going on for a while.