I teased you last week that my glorious headboard that I’d waited so patiently for had finally arrived.  Working with Emily of Fantoush was pure pleasure and she created this gorgeousness out of the ramblings of loads of emails around the style, colour, nailhead trim and size.  When I said in a previous post that I *might* have been able to create this myself, I lied.  There’s no way I could have made such loveliness with my own two hands.  What can I say… the girl done good.  Thank you thank you thank you, Em. As you may know if you’ve been reading my blog for a bit, I have a bit of a love of Hollywood Regency style which has been incorporated here and there in my fairly eclectic home.

I’ve wanted a yellow headboard for quite some time (in fact, I blogged about it here, back in October) and I adore velvet so it was always going to be yellow velvet for the bedroom.  Against the black walls, I knew it would give me the stand-out swoon worthy style that I was craving and the style provided a touch of glam Hollywood Regency style with its Asian-inspired shape. 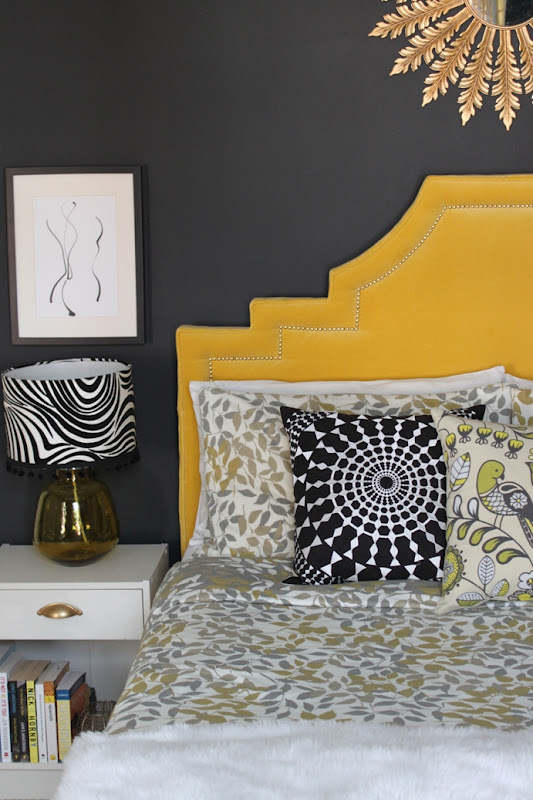 I have to say, I am SO pleased with how it turned out.  Actually, that’s a total understatement.  I want to make sweet sweet love to the headboard, that’s how much I freakin’ love it so I’ll just put you out of your misery, show you the entire thing and you can decide for yourself. 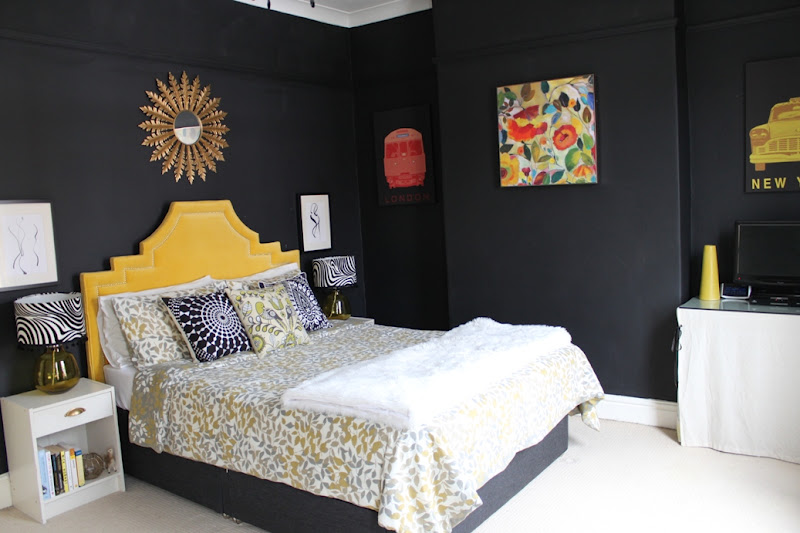 Ain’t she purty?  It’s really given the room the lift it’s been crying out for since I painted the room black.  I moved the colourful print to the centre of the side wall as it’s this that will be dictating the colours and direction the bedroom will be going.

Oh yes, there’s still plenty to do but I’m happy that we’re making some progress. 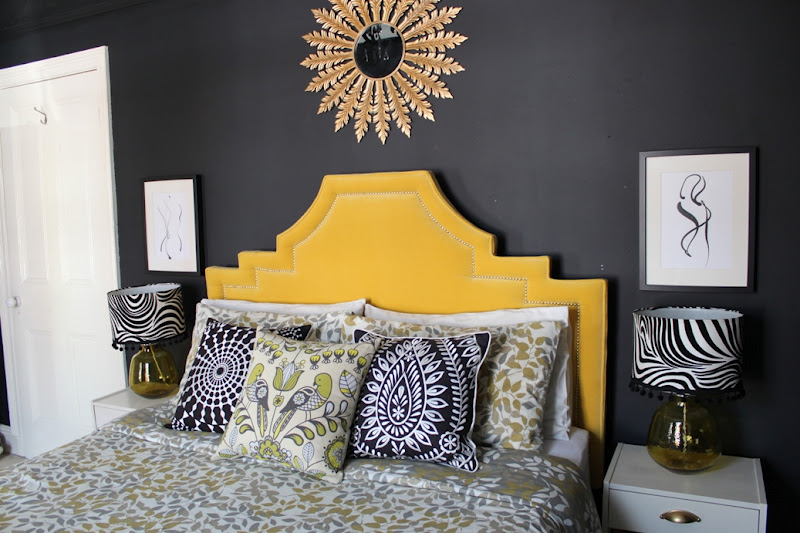 The eagle-eyed may have noticed a few other small changes.

The lamps got the pom pom trim treatment (I had some leftover from my skirted vanity project – I couldn’t resist, I love me some pom pom trim.) 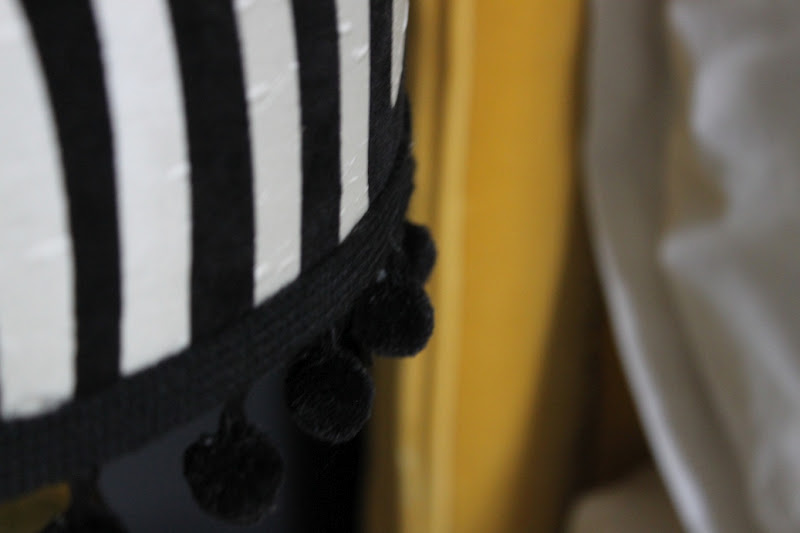 I also picked up a couple of inexpensive canvases to bring a bit more interest to the walls.  I really liked the way the matt black canvas disappears against the matt black walls.  Even better, they were only £6.99 each from Dunelm Mill.  Don’t tell anyone, okay?  They actually have some cool stuff at the moment.  Yeah, there’s lots of shit as well but some good stuff in there too.  Shhhhhh.  It’s our little secret. 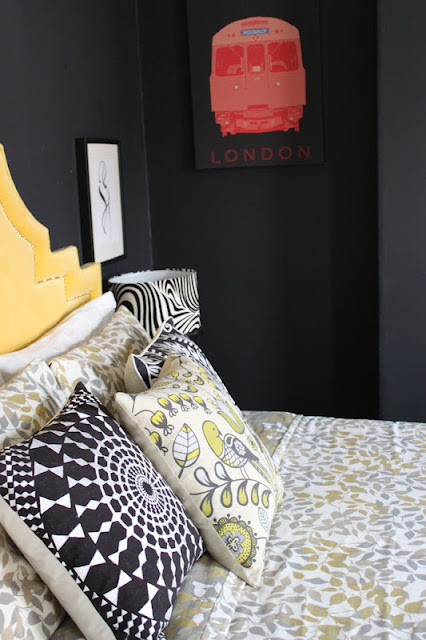 I also picked up this chinoiserie lamp from eBay months ago but don’t think I’ve shown it on the blog before… I think the lampshade is too small for it although I do like the red and gold pattern, I just haven’t gotten around to replacing it with a larger one yet. 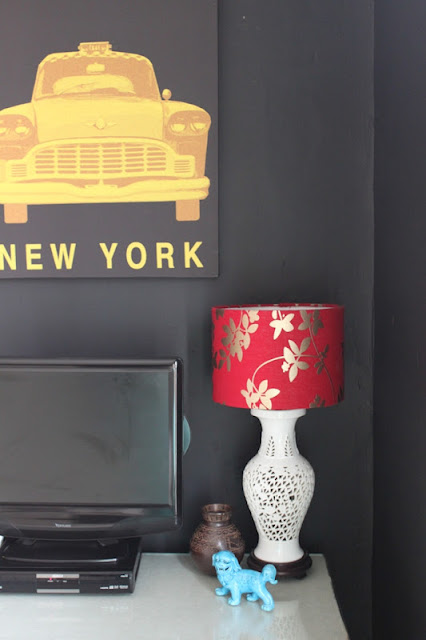 If there’s one thing that I really love about deep dark walls in a room, it’s the way colours and objects pop against them as lovely as they do against white walls. 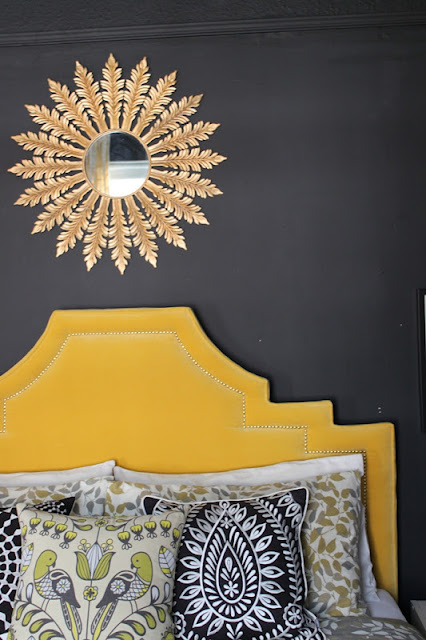 Ya know, I figured while we were here, that I’d show you a picture that I’ve never shown on the blog before.  This was taken just after we moved in and just after the whole room was painted pale grey.  Amazing how tastes and style develop over time, no? 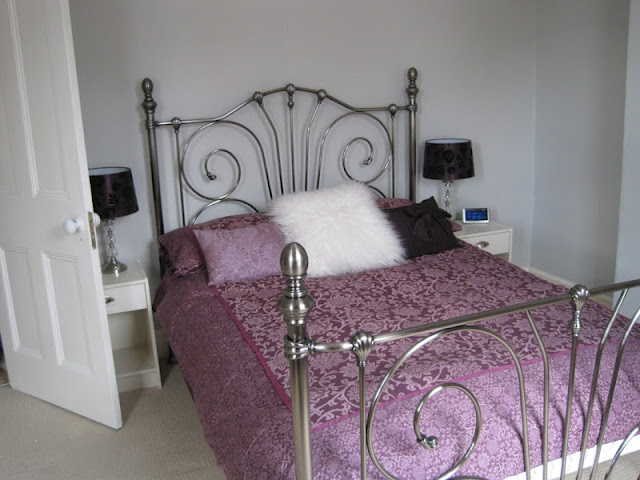 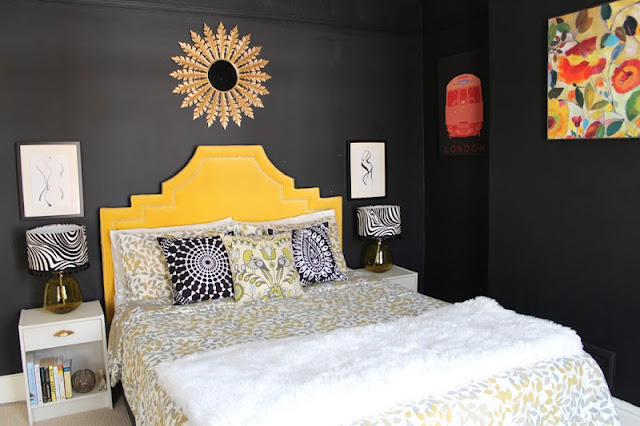 I’m desperate now for new bedside tables – I hated them before but now – oh now, they eat away at my eyeballs and I have to distract myself with the pretty headboard.  DON’T LOOK AT THE BEDSIDE TABLES! LOOK! VELVET! YELLOW! PRETTY!

I’ll share some of my wishlist for the room soon.  Suffice it to say, there is plenty on it.

In the meantime, what do you think of the changes?  Are you in love with velvet and nailhead trim like I am?  Do you share my passion for pom pom trim?  Do you think Hollywood Regency style is something only the Americans seem to have run with or have you seen it reflected in British style as well?  Do you love bright colours and dark interiors ala Abigail Ahern?  Do you share my wonder of Emily’s talent? The comment box awaits!