Progress Report: Wallpaper (and a couple other additions) to the Kitchen…Finally!

So how long has it been since I did an update on my kitchen?  Hmmm.  Turns out, it was in October.  Pretty rubbish, isn’t it?  And the sad fact is, this isn’t even a big huge leap in terms of progress, just something I’d been meaning to do for absolutely ages and only just got around to it.

I’m not sure why we haven’t finished the kitchen but I have my theories.  We did an awful lot on it in a short-ish space of time (like every weekend and taking time off from work to do more) and after we did the slate flooring, we were just so burned out on working on the kitchen.  We had other things we wanted to do, Christmas was coming soon so money was tight and the days were getting shorter (and colder) and we sort of lost our mojo.

And the truth is, the kitchen isn’t in an uninhabitable condition by any means which probably made it easier to ignore.  Aside from the lack of kickboards under the cupboards, you wouldn’t necessarily think there was much more to do.  But of course there is… which I’ll get to in a minute.

The thing is, I’ve been wanting to either paint or wallpaper the back of the open shelving since it went up but I wasn’t entirely sure what I was going to use.  Funny thing is, long long ago, before I decided on an eclectic gallery wall for the dining room, the initial plan – which I blogged about –  was to wallpaper it.  So on impulse, I purchased a couple rolls of a paper I liked with a dark grey background and a Moroccan inspired print in metallic silver.  However, once I painted the room (funny enough, matched exactly to the background grey in the paper), I decided against the wallpaper wall and the 2 rolls of wallpaper remained unused. 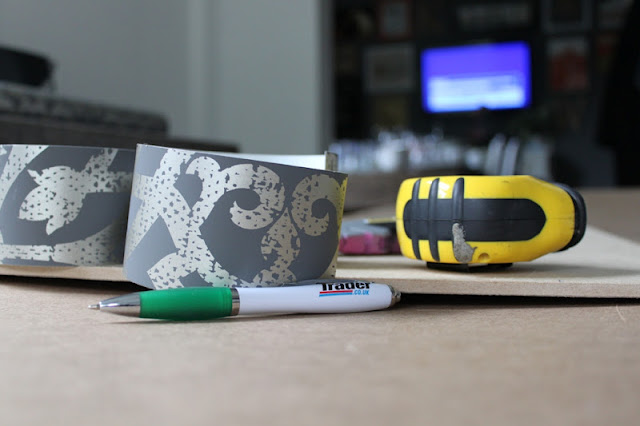 Until now of course. (You did see that coming, right?) 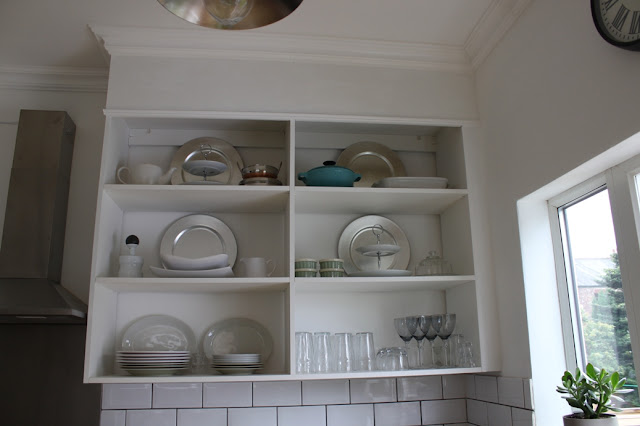 And this is what they looked like once wallpapered… 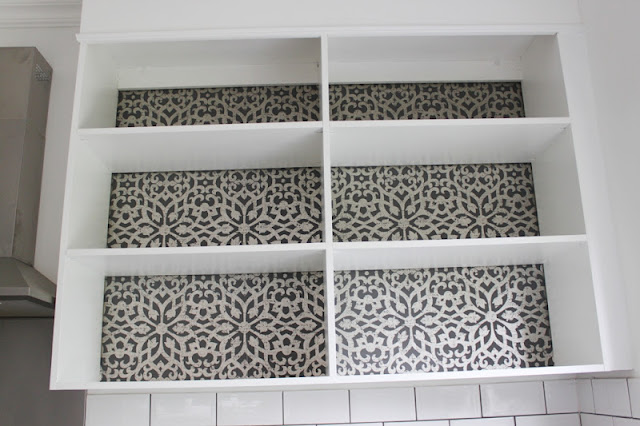 And now lots of pics of what they currently look like.  The grey ties nicely into the adjoining dining room and the metallic accent reflects light so it doesn’t appear too dark. 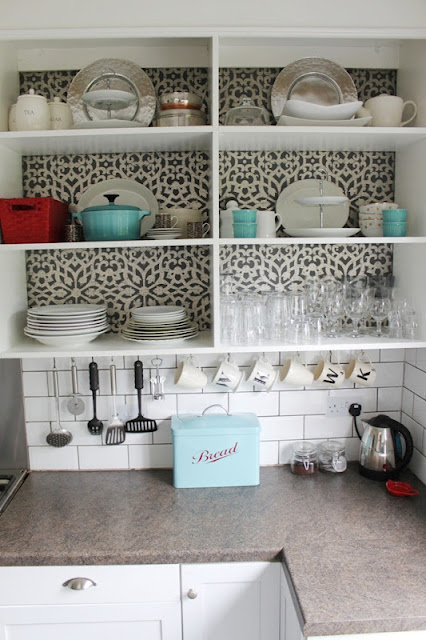 Here’s the cupboard on the other side… 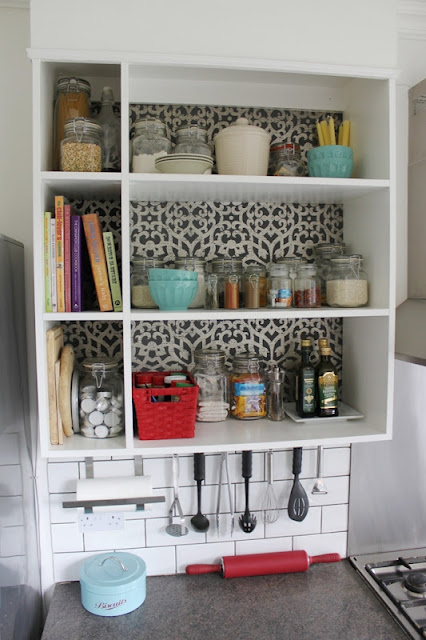 Now let me just take some time to say that there was an awful lot of swearing whilst this project was going on.  I’m not entirely sure how I could see given the amount of very blue air whilst I was measuring and cutting!!  The problem was that I had to cut the paper to the exact size before I put it up because there was no messing about with moving the paper around – there just wasn’t the space.

But, despite the initial why-the-f***-did-I-think-this-was-a-good-idea of a job, I’m pretty happy how it came out. 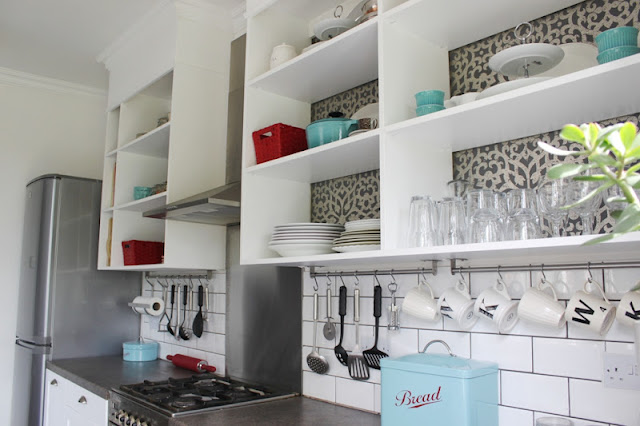 You may also have noticed that I have made a few small, inexpensive purchases like the new bread bin and biscuit tin in turquoise blue with red lettering.  I love the combination of turquoise, red and white and so I decided to pursue this colour combination in the kitchen.

Both the bread bin and biscuit tin are from Betty Twyford. 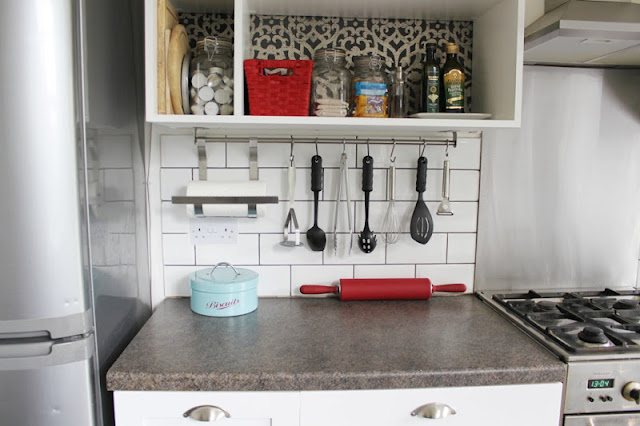 A little leopard print never goes amiss as well, of course.  The espresso cup set is from Zara Home (sadly no longer available on the site) and the pot was a gift from W’s mum, which we use ALL the time (in fact, as I type, it’s in the oven cooking up Kleftiko, a greek dish we adopted from a trip to Corfu last year – nom nom). 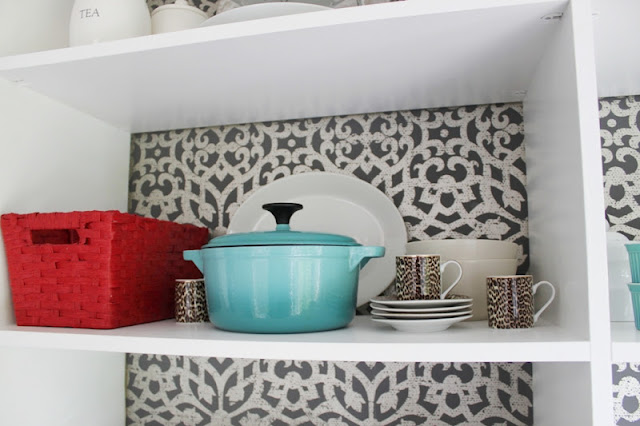 The turquoise bowls as well as the ramekins (seen in pics a little further in the post) were from Homebase. 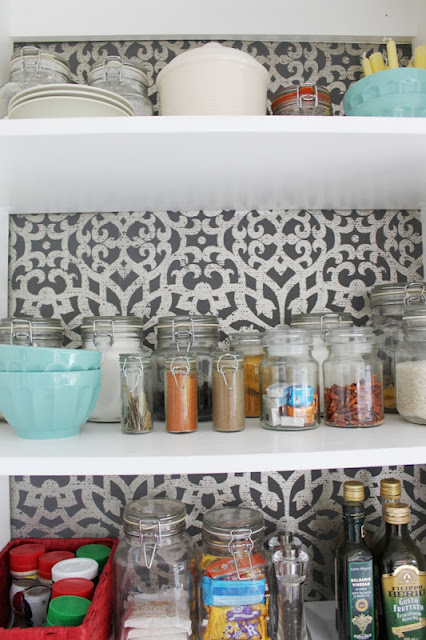 I also finally got around to getting to Ikea to pick up two more utensil hangers as well as a paper towel holder, freeing up more counter space.  I love how nice and neat all the cups look now instead of piled on a mug tree. 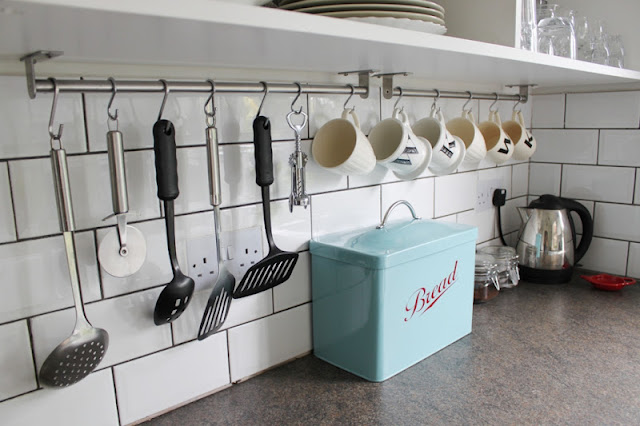 So whilst I realise it’s not a huge step in terms of progress, the changes have added a bit of much needed colour and pattern to the room.

Oh and we had the unexpected (but not altogether unwelcome) expense of having to get a new washing machine as ours died recently.  W did a sterling job of attempting to fix the 12 year old one we had, bless him (the whole thing was in BITS all over the kitchen which was fun) but shucks, the old girl just wanted to be laid to rest.  Why hello there new shiny white Hotpoint which is SO MUCH QUIETER than our old machine!  (Now it’s the turn of the ugly toaster to kick it.  Just sayin’.) 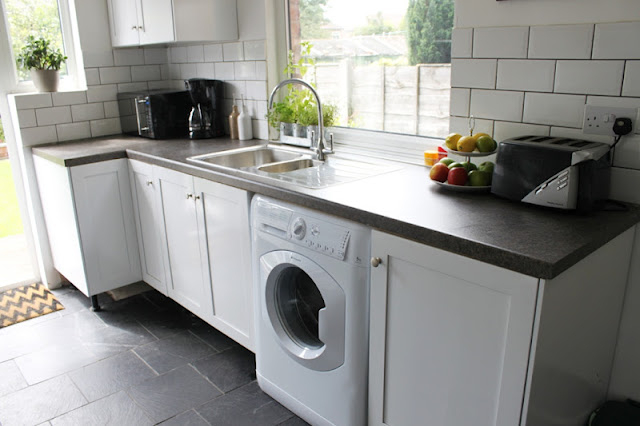 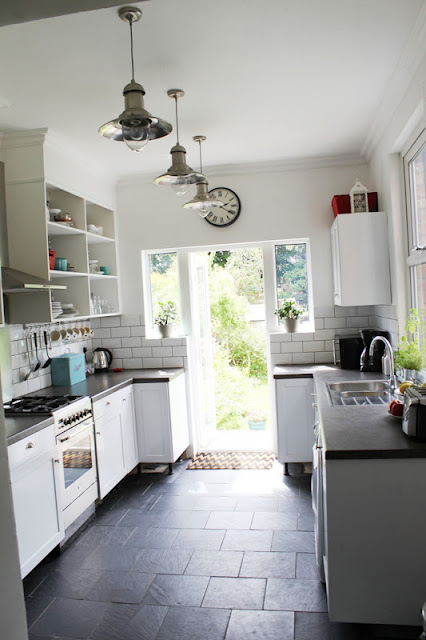 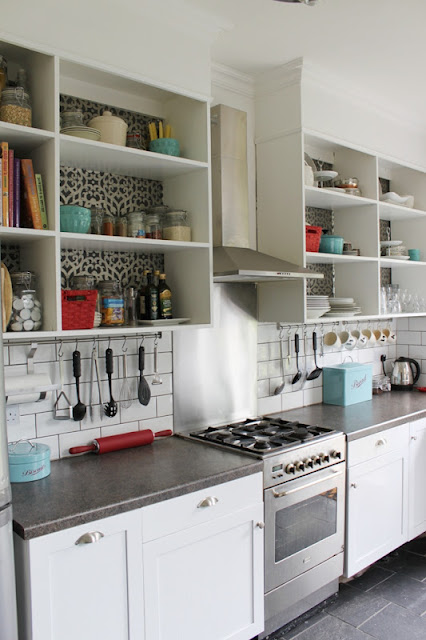 I still need some kind of window dressing here! 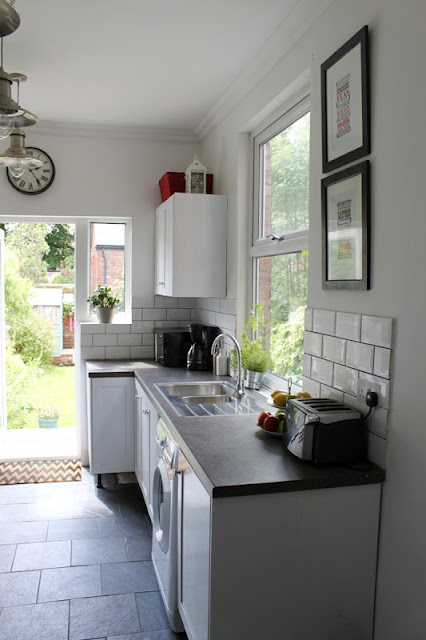 So aside from the kickboards under the cupboards and window dressing, what else is left to do?  Well, the one thing I miss about the old kitchen (believe me, there’s not much), it’s the warmth that all the wood brought to the space and something I feel is really missing here.  The white/black/grey scheme – even with the red and turquoise accents – still reads ‘cold’ to me.

A reminder of what the kitchen used to look like…

We want to replace the countertops with butcher block and put in wood kickboards as well, stained a lovely deep brown colour.  We want a new sink as well as a new cooker.  All these things are big ticket items, however, so we’re saving to be able to purchase everything at once.

As an aside, I just wanted to say that we’ve had our open shelving now for quite a while and despite my initial fears of furry plates, it’s not been any issue at all in terms of everything being ‘out in the open’.  I think the very sage advice of not putting anything in open shelving that you don’t use frequently is very true – it’s rare anything is on the shelves long enough to collect dust or grease and on the odd occasion something has gone a little bit furry, it’s just a quick wash and it’s just fine, no different than something being in a cupboard for quite a while unused. 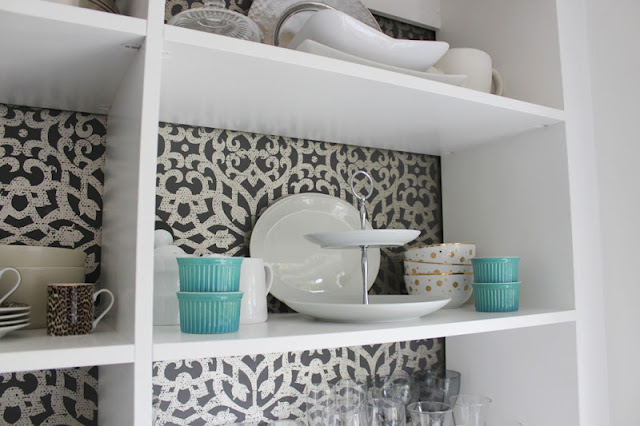 On the other hand, the slate flooring has been a bit of a nightmare.  While I do love the look, it gets very filthy VERY quickly and I feel like I’m forever cleaning it.  Proper high maintenance. Whilst it’s difficult to tell in the pics, it really needs to be thoroughly scrubbed and re-sealed but as W is currently doing a lot of work in the cellar, it’s a bit pointless because as soon as it’s cleaned, there are dusty footprints scattered over it.  A never ending battle in a home where there’s always some project or another!

So what do you think of the changes? 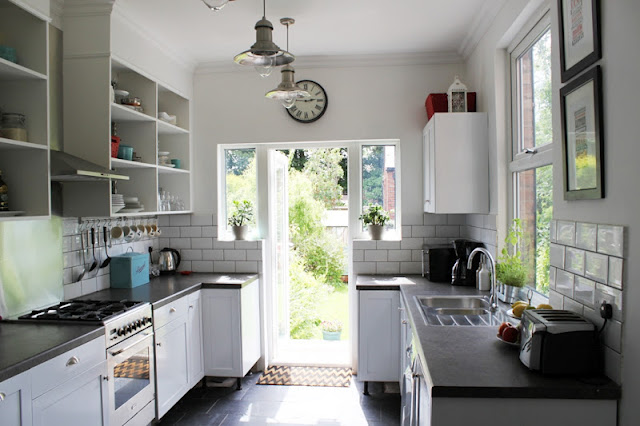 By the way, if you are new here (and if you are, why hello there you sexy thang! Thank you for joining me!), you can read about my kitchen design influences here, discovering the hidden ceiling here, tearing it down here, putting up the plasterboard and pendants here, plastering here, putting in the cooker hood, the backsplash and tiling here and putting up the open shelving here, installing the crown molding and the risers here, finally painting the cupboards and replacing the hardware here and installing the underfloor heating and the slate floor tiles here.