I made an impulse purchase last weekend.  It’s not something I try to make a habit of but I reckon it’s actually been festering in my mind for a lot longer.

Looking through the new issue of Lonny, I couldn’t help but notice that sunburst mirrors were still going strong in quite a few of the gorgeous rooms that were shown.  And I wasn’t the only one to notice it.

And then, when I saw this image on an eBay listing, it pretty much sealed the deal for me.

A bit more eBay digging and I found one a bit cheaper than in the listing above.  Within a week, that baby was mine.

I know I just recently showed the dining room but this has made such a difference to the room that I couldn’t help but share the update.  I knew I wanted to get rid of the black wrought iron mirror that was there before along with the wrought iron candle sconces but until then, I hadn’t really figured out what it was I wanted there.  I knew as well that the wrought iron mirror was hung far too high but I couldn’t be bothered lowering it when I knew I was just going to get rid of it eventually anyway.

Combined with my little Chinese plates and a couple of speckled gold glass chargers I’ve had for probably 6 months or so, it’s given the mantle a proper shake up. 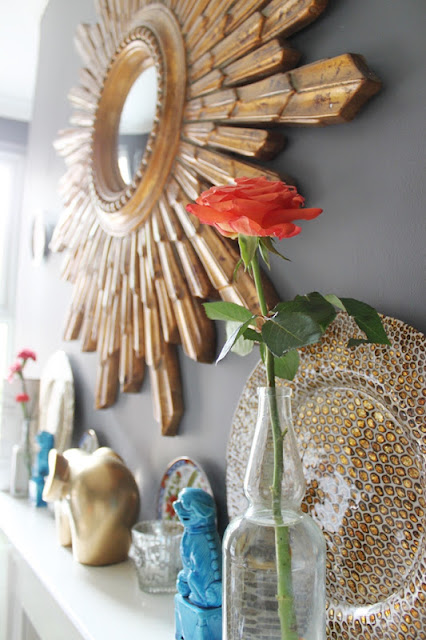 I think the plates hung on the sides of the sunburst mirror are probably a little too small and eventually I will probably replace them with something larger or perhaps add a couple more to each side.   I used these self-adhesive plate hangers which seem to work really well.  They haven’t fallen off the wall yet anyway! 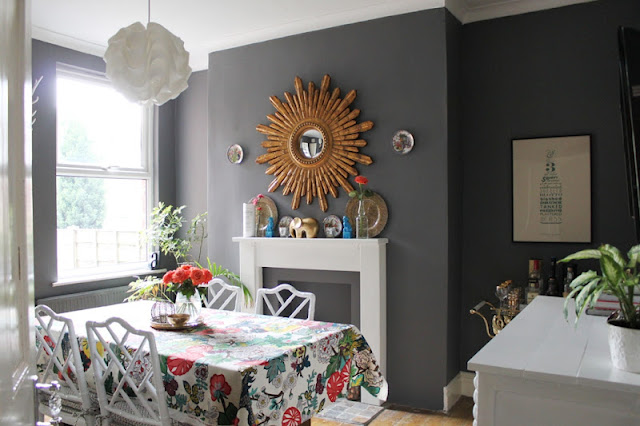 I used the Chiang Mai Dragon fabric as a tablecloth for some of these pics but it’s just styling – truth is that I’d never in a million years actually EAT off the table with it there!  So, for the sake of full disclosure, I also threw on my leopard print tablecloth that I used at Christmas as this is probably closer to the every day look! 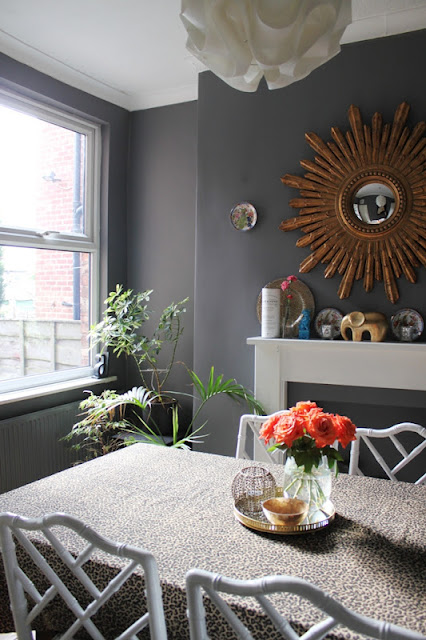 As an aside, I have to mention this… see that little dark mark above the hanging plate on the left?  I didn’t actually notice that in real life but it seemed to really come up in the pictures.  It’s a small burn mark from where I’d had the candles.  So I need to clean/paint a bit it seems – strange that it wasn’t actually noticeable to the naked eye but I felt like I had to come clean and mention it because it’s really bothering me now! Whew, now that that’s off my chest, back to the post and a welcome distraction…

Here’s a close up of the chargers… they are really so pretty and sparkle fabulously in the light. 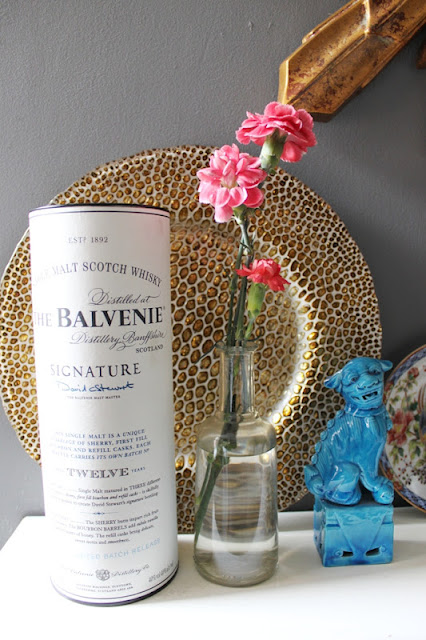 They look like leopard print from far away but close up, they are actually a lovely pattern that reminds me a little of honeycomb.  I had a set of 5 initially (the company had sent an extra by mistake – not that I was complaining) but this weekend, whilst taking them down from the open shelving in the kitchen, I broke one!  So I’m down to a set of 4.  Karma is a bitch. 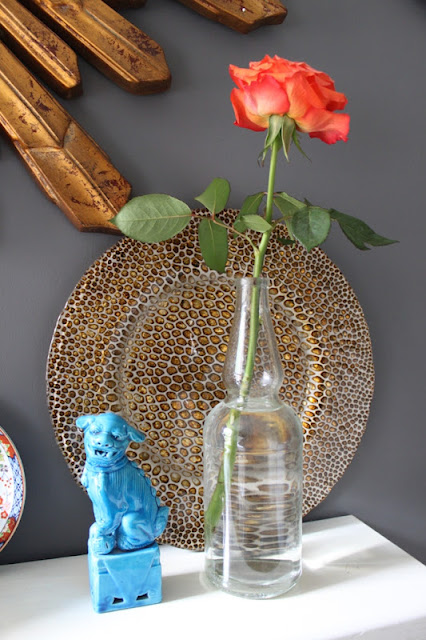 Back to the mirror…. One thing I quite like is that from the hallway,  you can actually see both sunburst mirrors in my downstairs – the white one in the lounge and the gold one in the dining room.  Obviously, if I had a wide-angle lens, this would work better but you can kind of see what I mean here (I took the pic from the hallway so excuse the crappy light switch, we haven’t really done much in there). 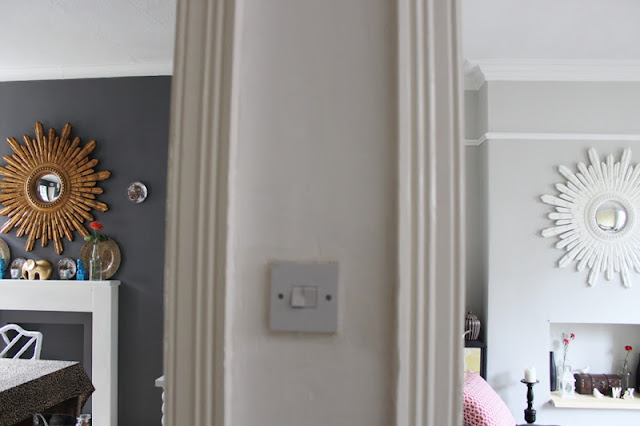 When I look back at pictures of this room from last year, I’m still quite amazed at how far it’s come.

This is what it looked like back in April of last year.  Although perfectly ‘nice’ (and heck, I’m sure there will be some who will have preferred it like this), it looks so EMPTY to me.  So lacking in colour, in personality. 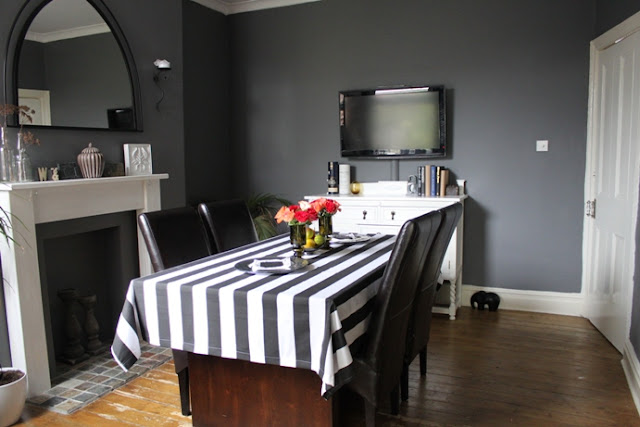 Now, just over a year later, it’s filled with colour and contrast and lots of STUFF.  I’m a maximalist at heart, I guess.  I just like to see clutter and things and colour and LIFE all over. 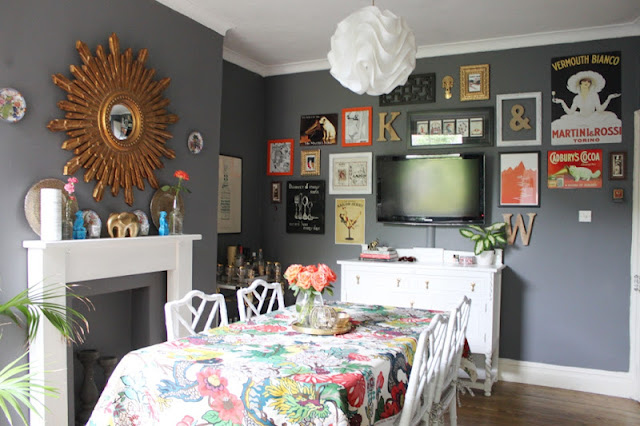 It’s amazing the progress and journey a single room can take in such a short space of time even though it’s been actually done in very, very small steps.

I do wonder at times whether as a reader, you prefer to watch this journey unfold slowly?  Or would you rather wait until an entire room or space is completed until it’s revealed?  I fear if I did that, I would have nothing to share with you because not one room in my home is actually finished yet! 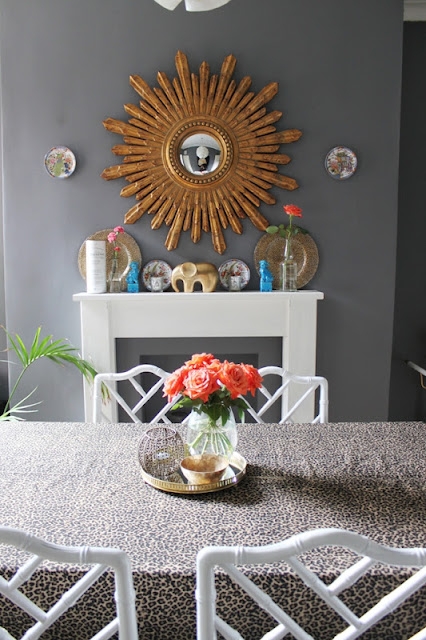 I suppose what I’m showing here on Swoon Worthy is real life and real evolution in real time.  And it takes time to create a space that really reflects your taste, your style, your budget.  I couldn’t have afforded to complete the entire room at once, it would have been too expensive.  But spreading the costs over months or years even with little changes as I go, just seems to work better for my bank balance.  Not only that, I think rooms work better when they evolve over time, they sort of find their own feet rather than look like they are purchased from the pages of a catalogue.

Thinking back, I originally really wanted more of that industrial vibe in here but the nod to Chinoiserie/Hollywood Regency and a more glam look over all really appeals to me more now.  So that’s where it seems to be going. 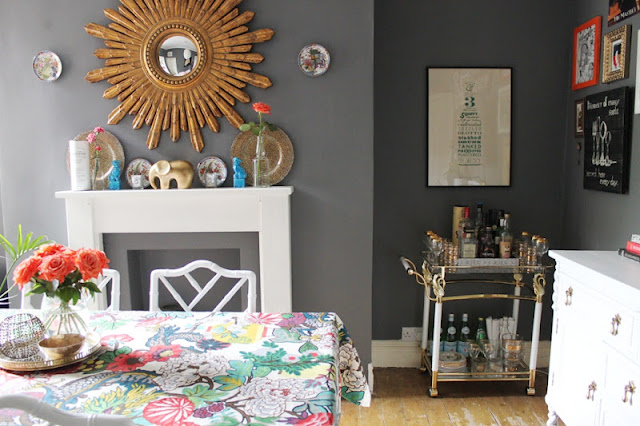 Who knows where it will be in a year’s time though! What do you think of the change?  Do you reckon sunburst mirrors are here to stay considering they’ve been given the big thumbs up by Lonny?  Or are you sick of seeing them by now?

Y’all have been kinda quiet on the commenting front lately so I just wanted to encourage you guys to get involved with the conversation!  Honestly, like every other blogger out there, I LOVE getting them so please don’t be shy – each and every comment is so appreciated, please know that. :)

Ooooh just a little reminder… don’t forget to email me if you tweet, blog or share Swoon Worthy Homewares with your friends and readers to get 25% off your next purchase of pretty geometric cushions! 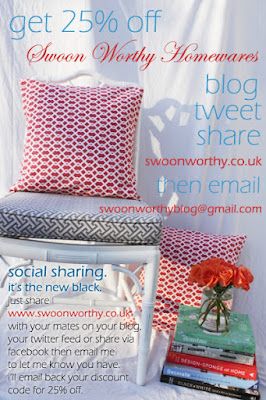