The following contains an advertising feature for Very who have kindly sponsored this post.

Well, it’s finally happened. I have been waiting for years now (3 1/2 to be exact) to update my living room with the Samsung Frame TV before I felt like it was really complete and let me just start by saying, it was totally worth the wait. 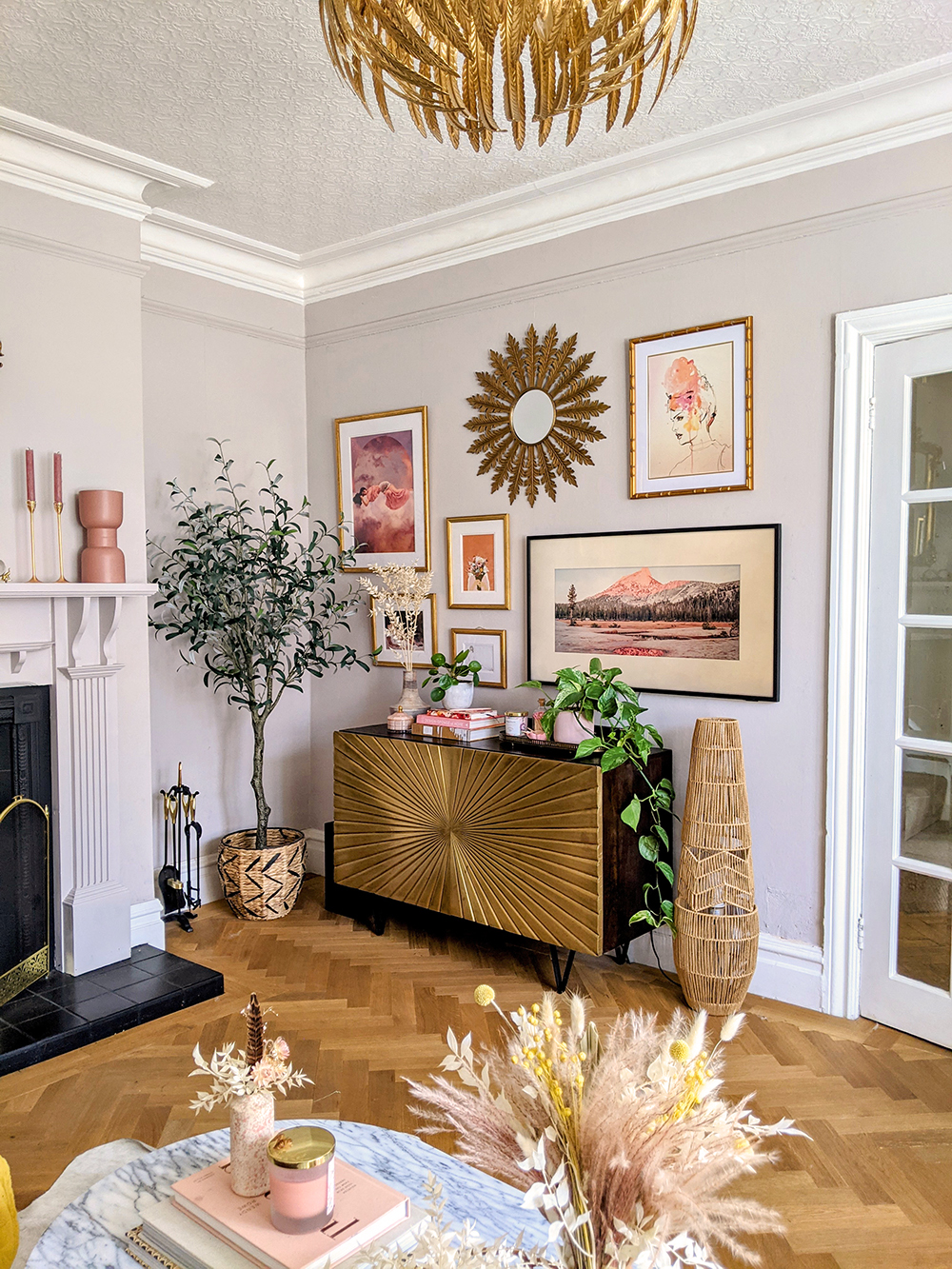 I think pretty much everyone I know who loves interior design lusts after Samsung’s genius ‘is it art or is it a TV?’ Frame TV. We are lucky enough to have one in our dining room – something I insisted on when we moved into our home and created our open plan kitchen dining area. I also knew that there was no other TV that I would ever want to have in our living room. Sounds dramatic, doesn’t it? But once you realise how effortlessly a television can blend into the surroundings instead of having a ‘big black box’ sucking the life out of a room, you really never want to go back.

Very carries an extensive range of electrical products for your entire home with a wide range of televisions and so I was delighted when they’d asked if I’d like to review the newest 2020 version of the Frame TV.

You can read the review of the previous model of the Samsung Frame TV here. 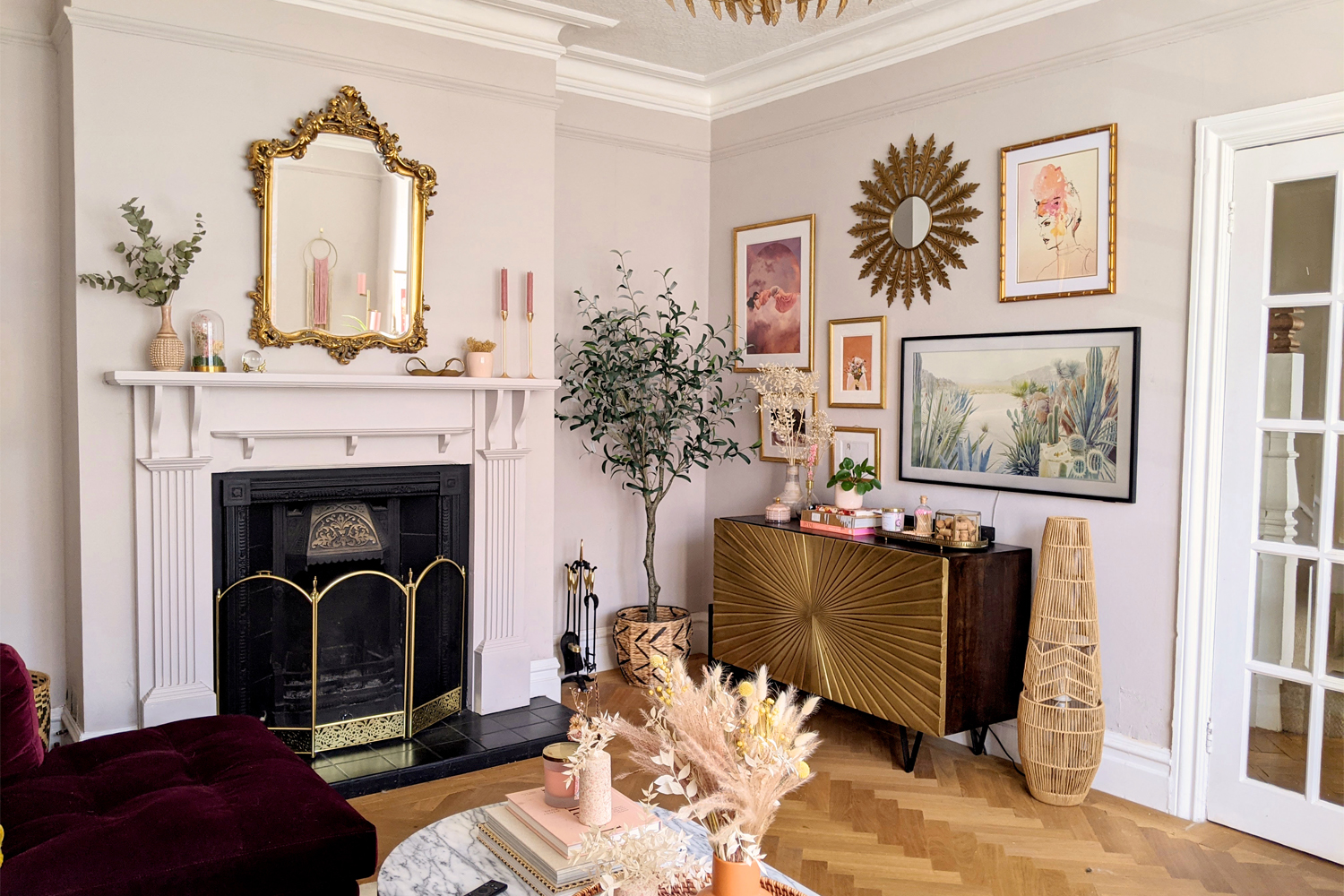 If you’re not familiar with Samsung The Frame 2020 43 inch QLED 4K HDR Smart TV, then let me introduce you to this amazing piece of technology. So many of us (myself included) have struggled for years with how to make the big black box in our living rooms visually disappear – whether that’s by housing it within a unit, creating complicated sliding contraptions, painting walls dark to ‘hide’ it, or simply giving up, knowing it’s just one of those things every living room has.

In fact, if you look at inspirational photos of living rooms in professional lifestyle magazines or even many home makeover programmes, you rarely see them at all. If you think it’s because people would like to give the impression that watching television is somehow not something they indulge in, that’s not actually the case. The truth is, stylists hate them. Having a glaring, light-sucking black box in the corner of a beautifully decorated space kind of throws off a whole design so they simply remove them from the space before photographing or filming it. Televisions, by their very nature, are simply ugly beasts, really, and for years we’ve had to just deal with that fact.

Enter Samsung, who came along like a knight in shining armour and completely redesigned the entire concept of what a television really could be. Somehow, they managed to incorporate incredible technology with QLED picture quality alongside a myriad of clever smart TV features (easily accessible whilst the television is in use) as well as the idea that a television could simply become part of the fabric of the room – a beautiful piece in its own right, displaying works of art that will fit in with pretty much any style of space imaginable – from sleek contemporary spaces to the most artfully maximalist ones.

I wanted to share how the Frame TV totally transformed the whole look and feel of our room, cleverly disguised within a gallery wall and why it should really be on your own wishlist too. 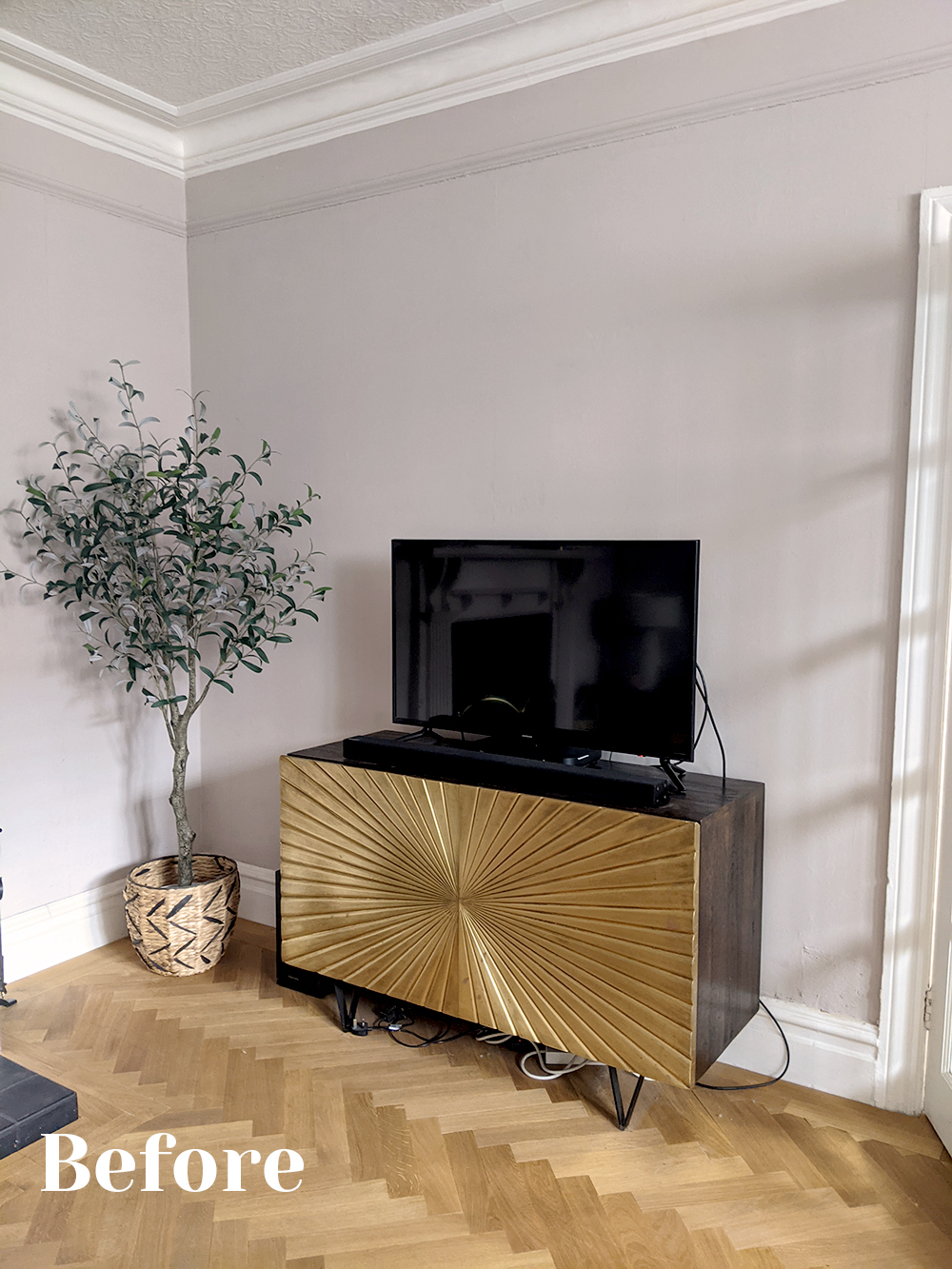 Let’s just start with the before photos. You may have realised you rarely saw this side of the living room. No matter what I really did with this wall, it just always looked a little sad and so knowing that eventually, I wanted a Frame TV on this wall, I sort of allowed it to be a bit neglected. (As you can see, a cacophony of wires seemed to be breeding behind and below the TV which added to my disgust levels every time I looked at it!) 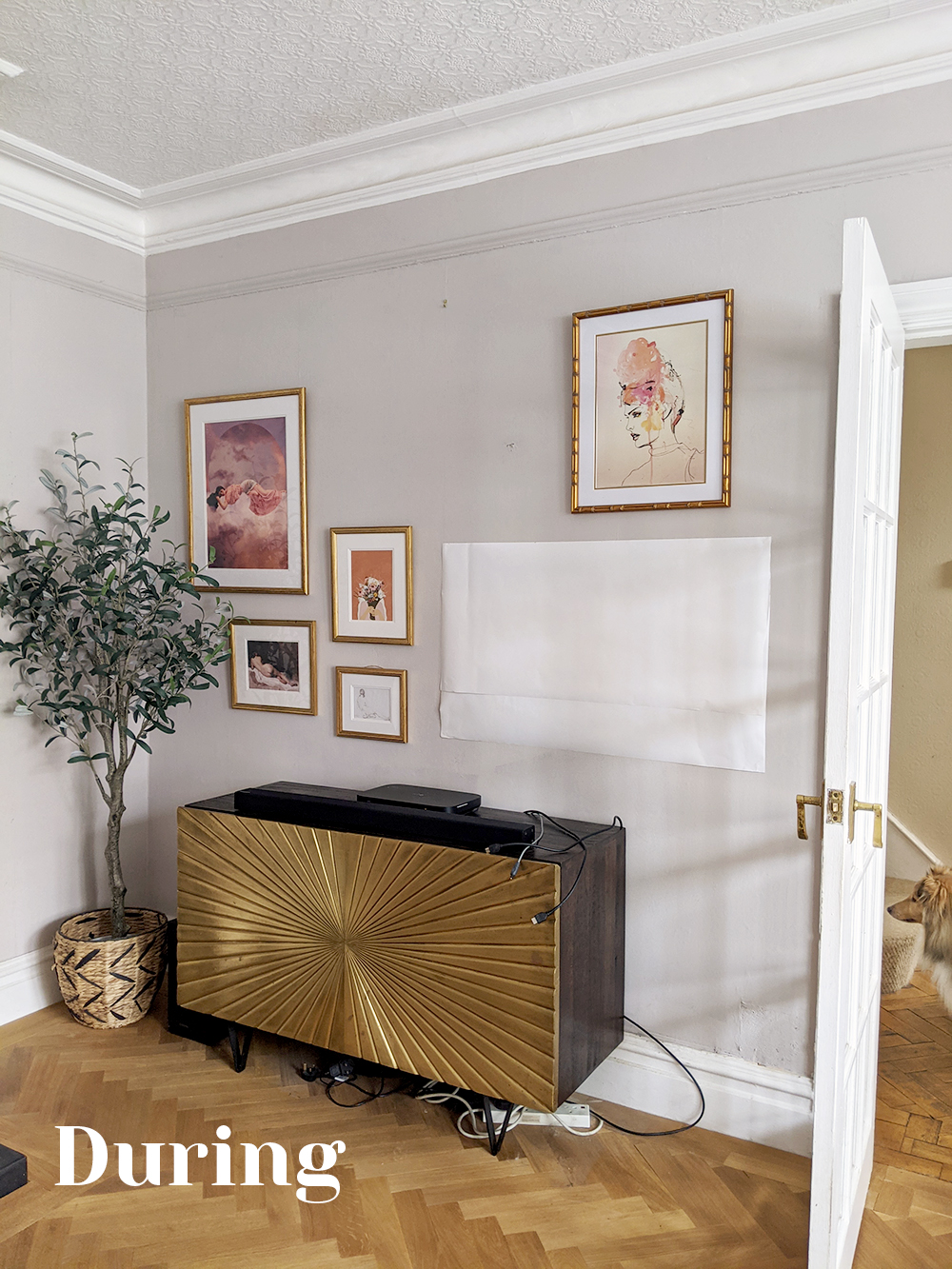 For my own wall, I decided to create a gallery, allowing the Frame TV to easily blend with the surrounding pieces of artwork (all of which I already had, I simply grabbed a few pieces I loved from around the house!). My first step was to use some kraft paper cut to the same measurements as the TV.

As an aside, we’ve always had the sideboard moved slightly to the right on this wall because that meant the TV was directly in front of our sofa. Thanks to the fact that the TV was now a part of a gallery and didn’t have to sit on top of the sideboard, I was finally able to move the sideboard to the centre of the wall and simply hang the TV exactly where it was best placed instead. Having decided on the placement of the TV, I simply built the gallery wall around it, using a couple of larger pieces to fill out the space with smaller framed artwork filling in some of the gaps.

If you’re hanging your own gallery wall, it’s always good to start by cutting the frame sizes out on kraft paper then use white tack to decide on the placement of each piece, moving them around until you find a placement that’s visually pleasing. Once you’re happy with the layout, then you can nail in your picture hangers – it definitely saves you from having to make numerous holes in your wall! 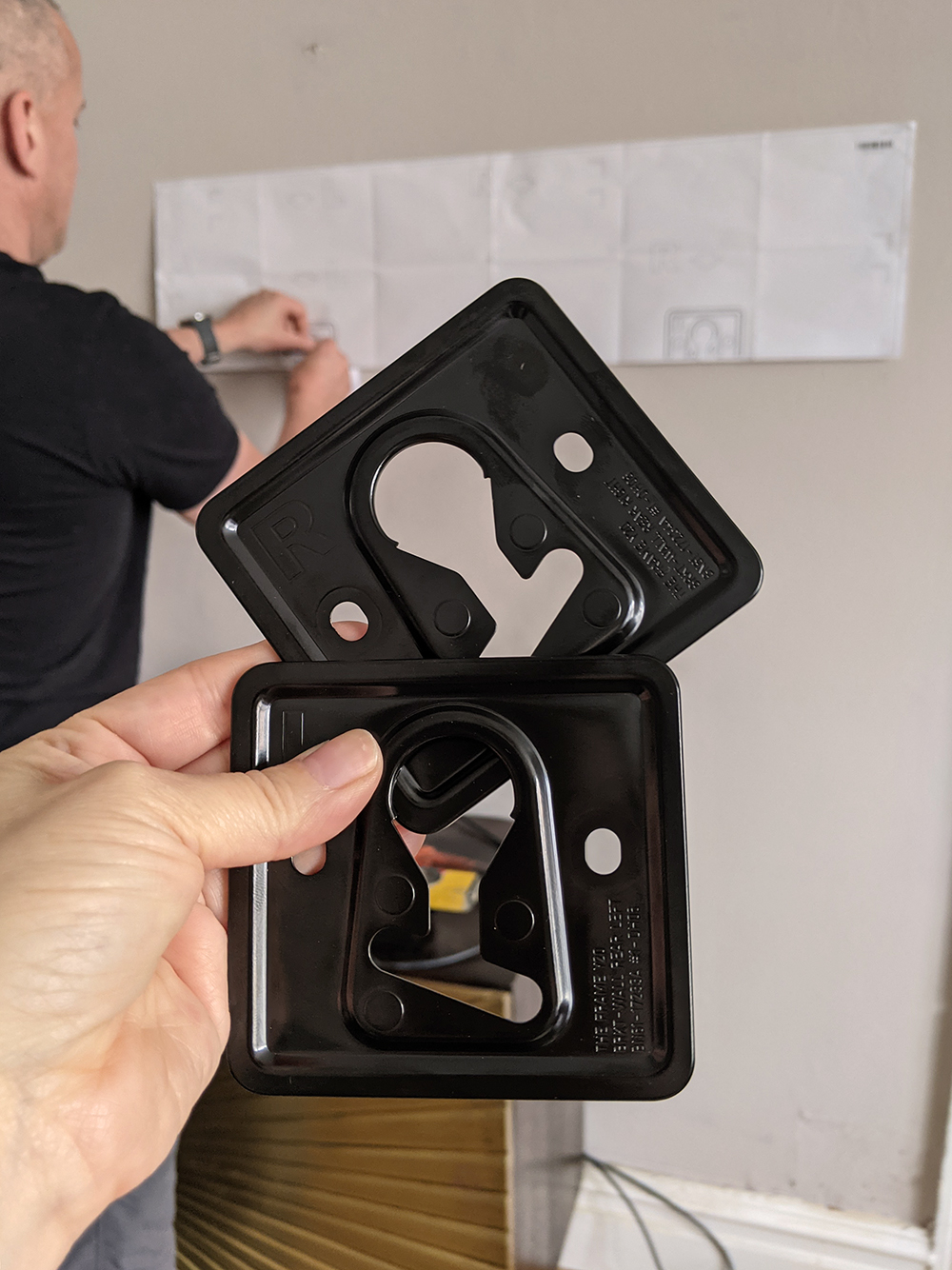 Installation of the new 2020 model is easier than ever and literally took Wayne about 20 minutes! Whilst the older version had a much larger wall bracket, the 2020 model comes with just two small brackets – so small in fact, that I initially thought the bracket hadn’t even been included in my box. Silly me, I just hadn’t realised that a television could hang on something so simple and sleek! The new style of bracket means it sits closer to the wall than ever, really creating and replicating the idea of simply hanging a piece of artwork on the wall. 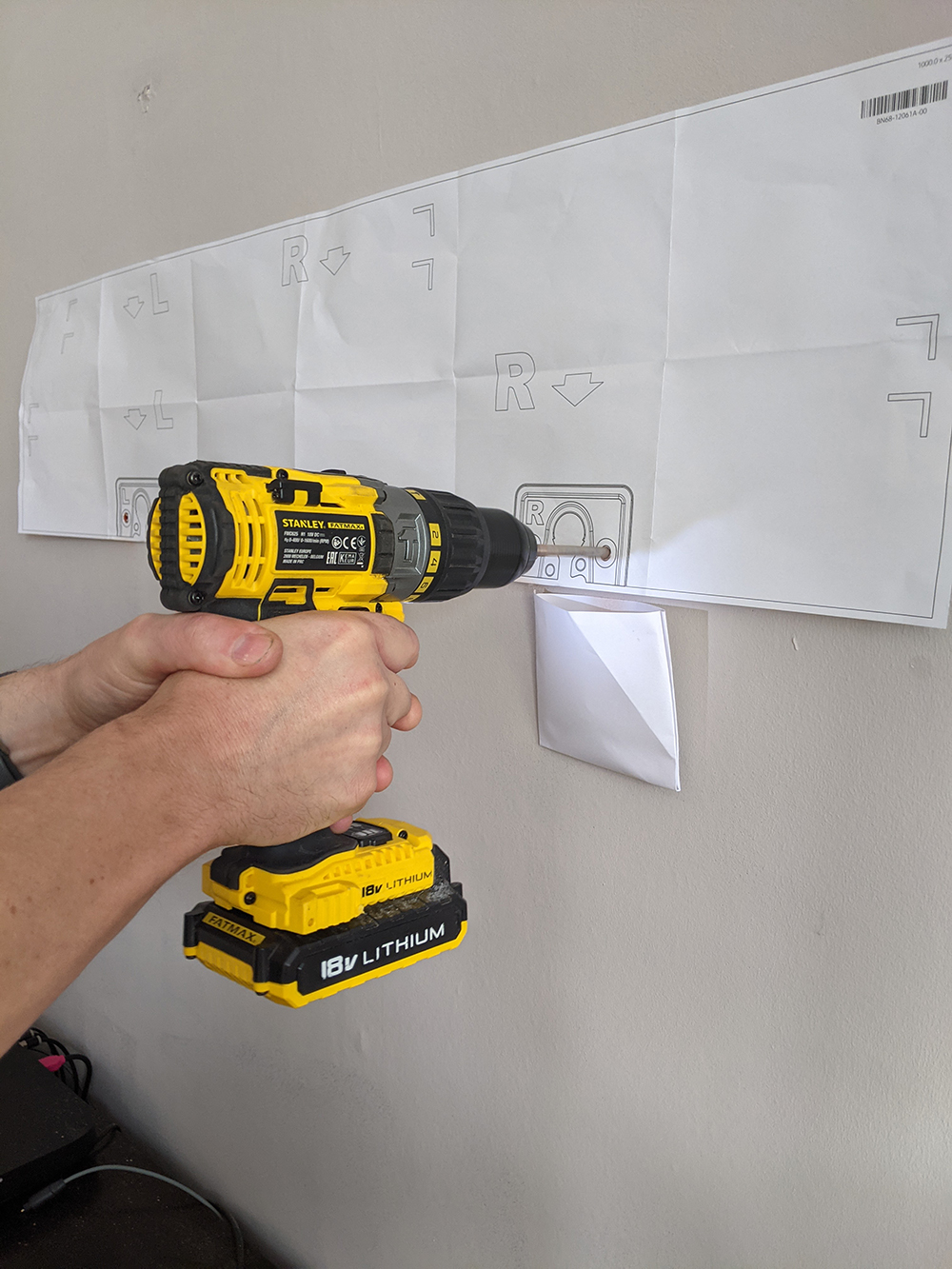 There’s even a wall template included so you know exactly where you need to drill in the wall – they’ve left nothing to chance here so the whole process is incredibly efficient and quick. 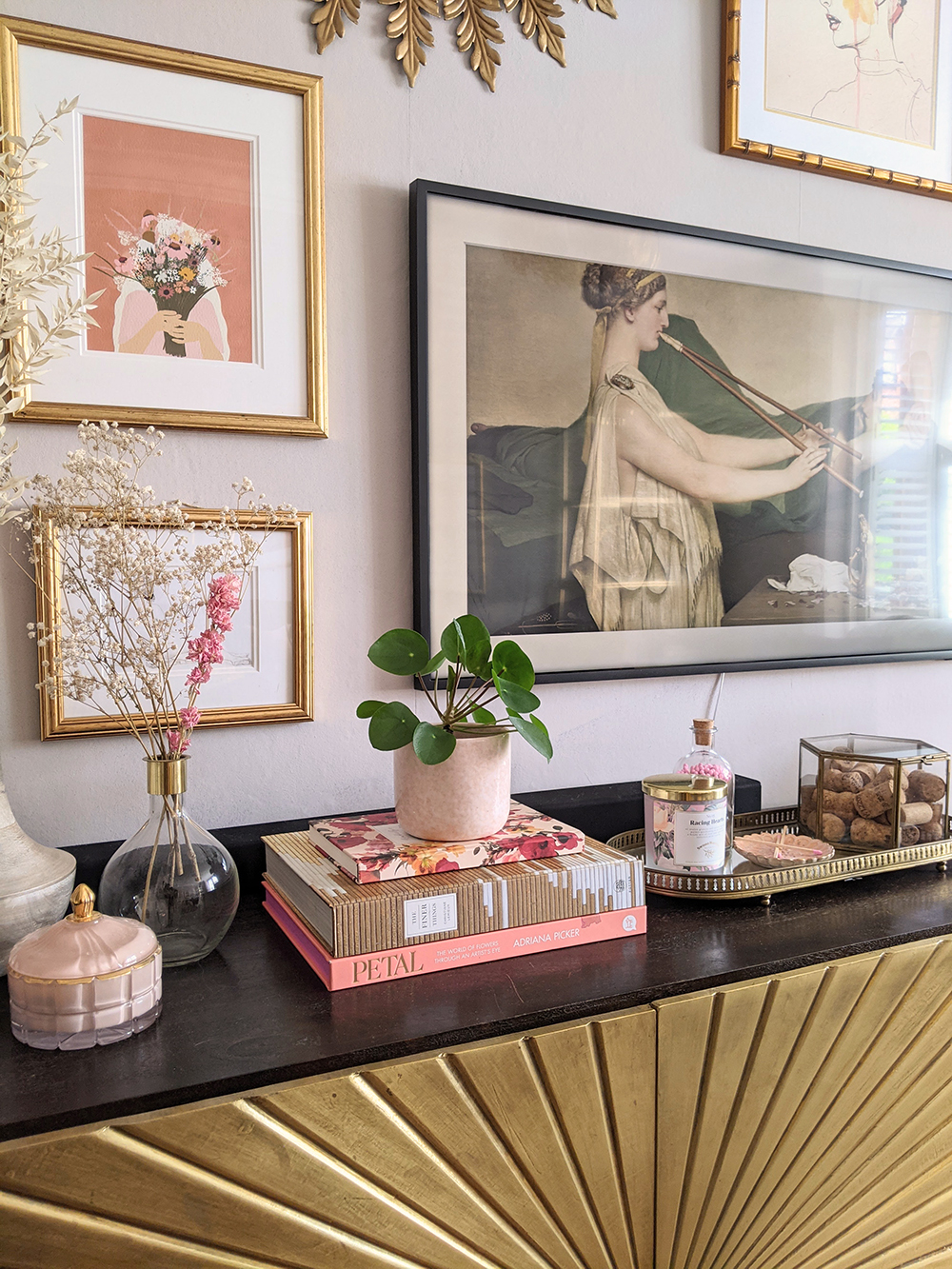 With the brackets in place, all that was needed was to slide the television onto the bracket and within a few minutes, only a small single barely visible wire hung where previously there had been so many! The wire simply plugs into the Connect Box, a hub which can be hidden away within a sideboard or cabinet underneath and then any other boxes or games consoles (the Skybox and Playstation in our own home) simply plug into the same Connect Box. All the wires are hidden away with nothing else on show! I told you it was genius! 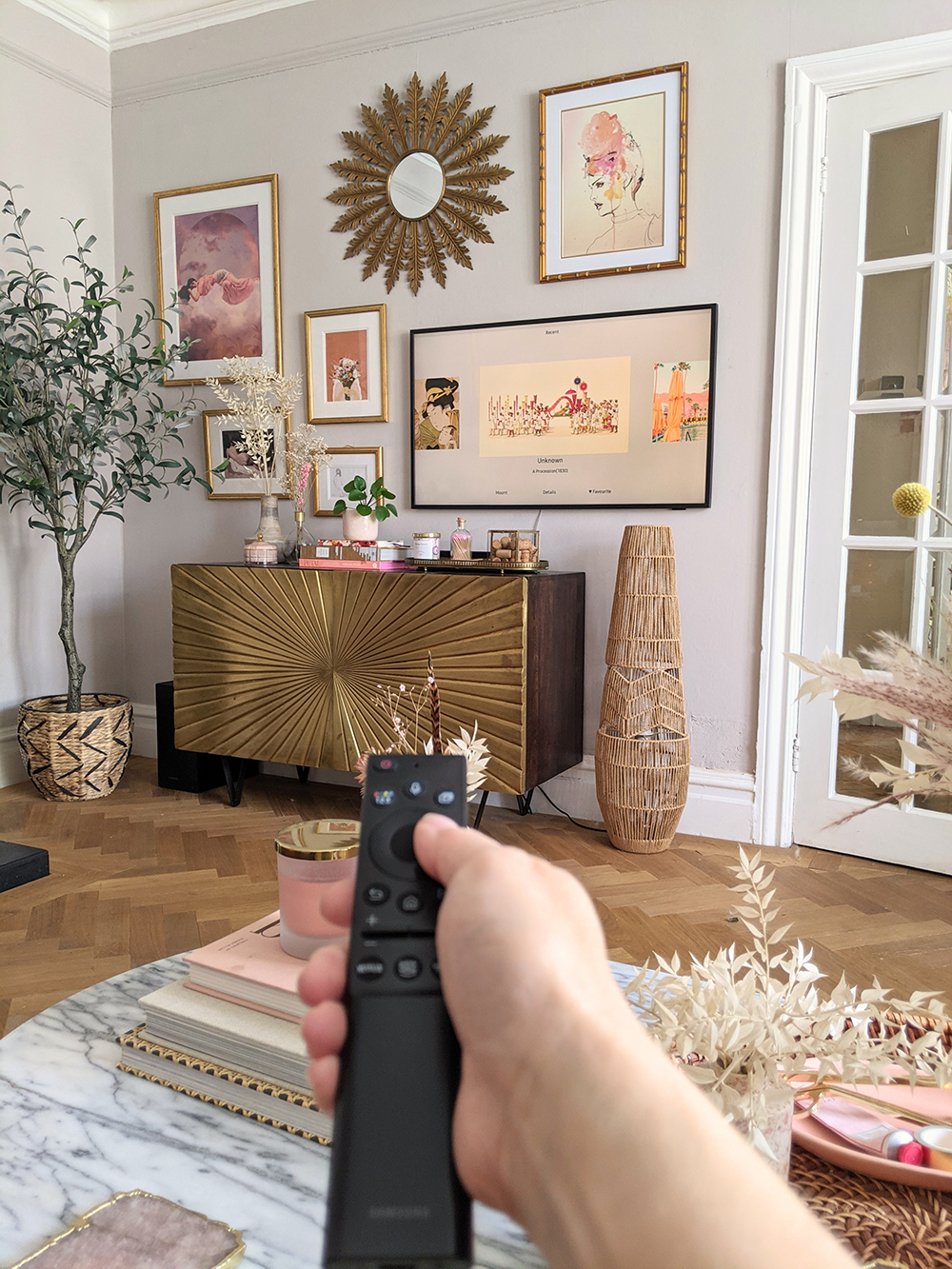 Delighted with the new look, I’ve excitedly been checking out some of the newest features of the 2020 Frame TV model that I hadn’t previously experienced. Of course, Art Mode is my favourite aspect of the Frame, allowing you to access hundreds of different artworks across every single genre as well as allowing you to change and choose your mount for a whole different look.

The newest version of the Frame TV provides different mount options as well – from thin stylish ones to wide contemporary styles in every different colour. You have access to 100 different styles for free but with a subscription to the Art Store (which I already had!), there are even more options available. Perfect for someone who loves to switch up the look and feel of a room with just a few clicks! 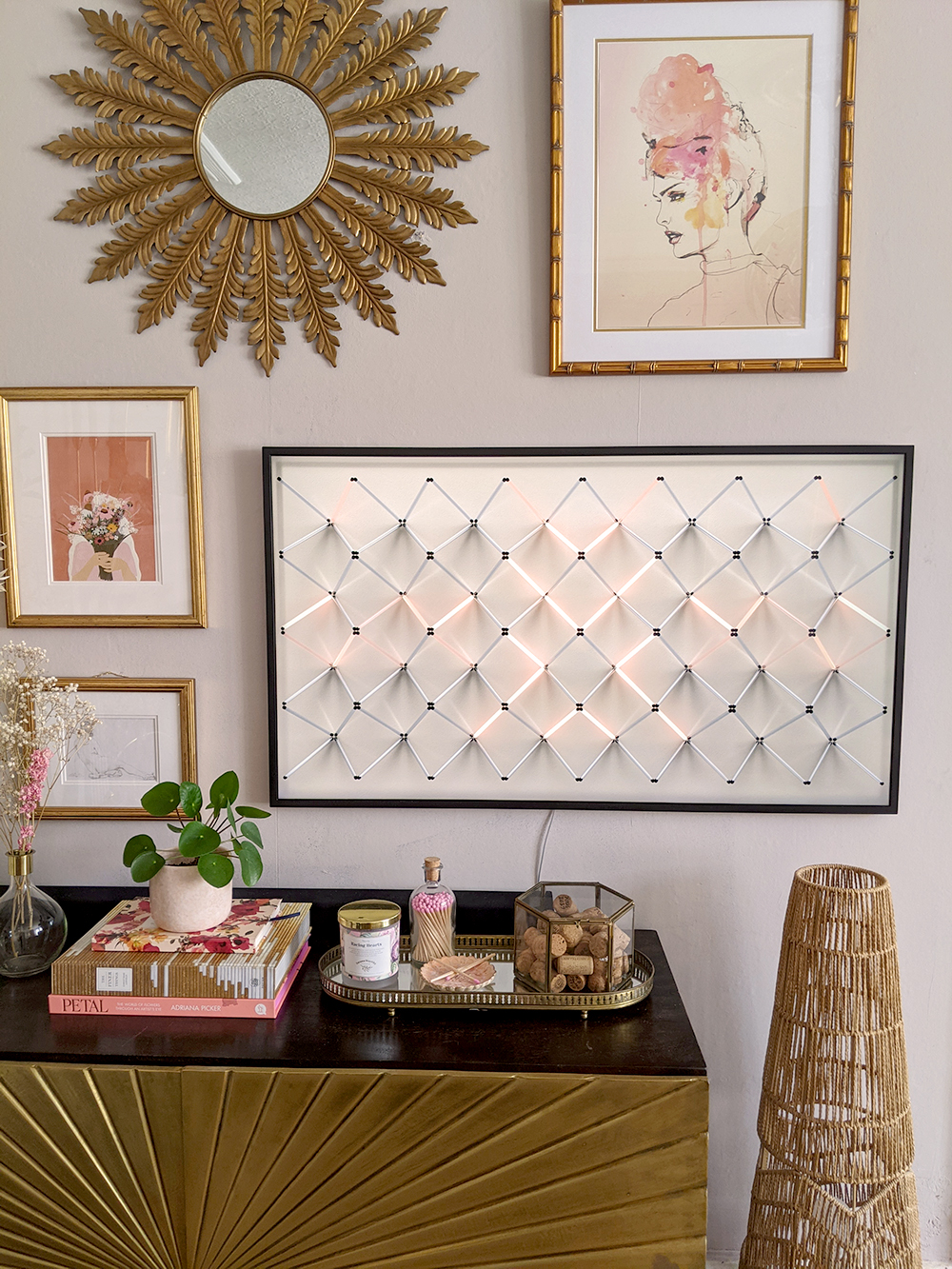 There’s also now an Ambient Mode function that has some really clever moving style images – my favourite one (shown above) features what appears to be moving lights that cast shadows within the frame. It genuinely appears like some kind of expensive art installation on your wall. There’s also another function that allows you to view the current time, temperature and weather or further ones which show softly moving abstract designs or slowly moving images so it’s a lovely additional feature and something a little different to a still piece of artwork.

That’s not all of course – Samsung has incorporated all your favourite features including streaming services that are available on the remote control. A single click of a button and you can browse Netflix or Amazon Prime. You can also use voice controls that allow you to call up music on Spotify or connect it to Alexa, Google Assistant or Bixby. 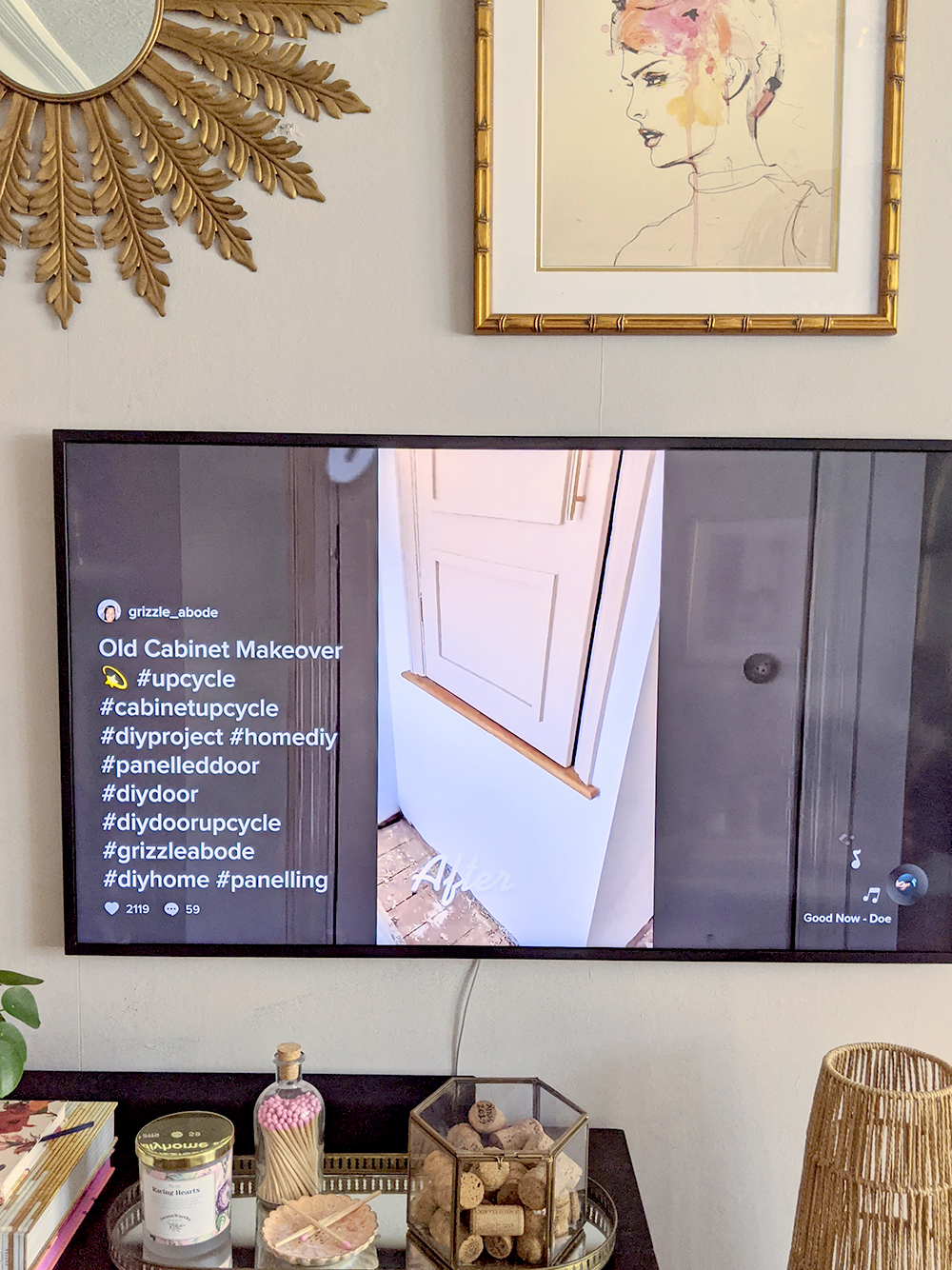 However, there are also plenty of apps you can download, my newest favourite being TikTok. It was so easy to install (you simply log in on your phone and then scan a QR code that appears on your screen and you’re in) and within minutes I was browsing all my favourite home decor and DIY accounts on a big bright large screen. It’s so much nicer viewing all kinds of renovation ideas as well as inspiration for decorating your home on a much larger size rather than browsing on your phone! 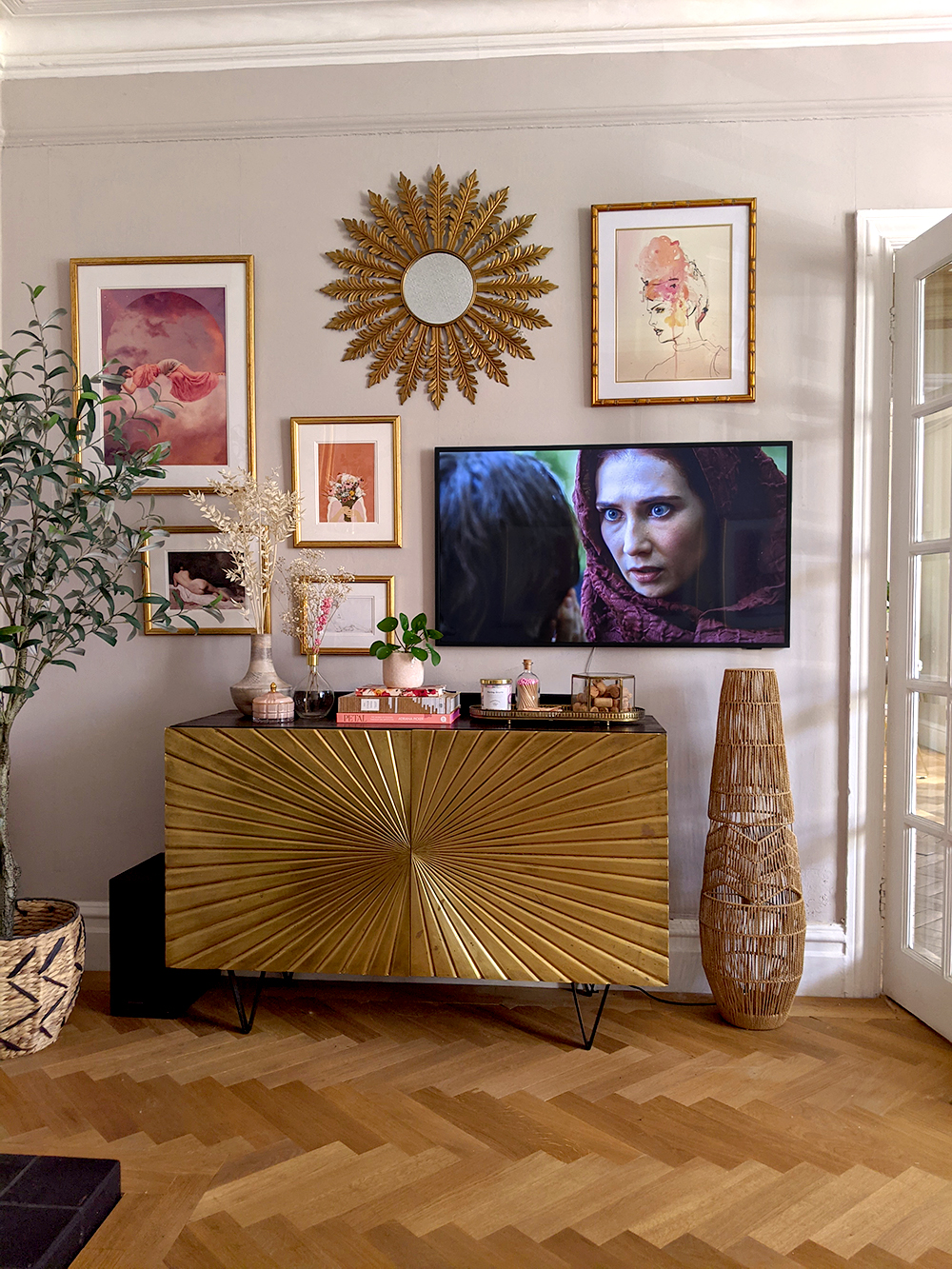 Of course, I would be remiss not to mention that the viewing quality of the television is incredible. With a Crystal Processor 4K that delivers Ultra HD resolution, images are incredibly lifelike. The QLED picture technology is supported by Dual LED backlighting which delivers 100% colour volume and Quantum HDR powered by HDR10+ generates incredible levels of detail, brightness and contrast. So not only am I thrilled with how beautiful and well-designed it is, Wayne is thrilled with the technology and picture quality too! 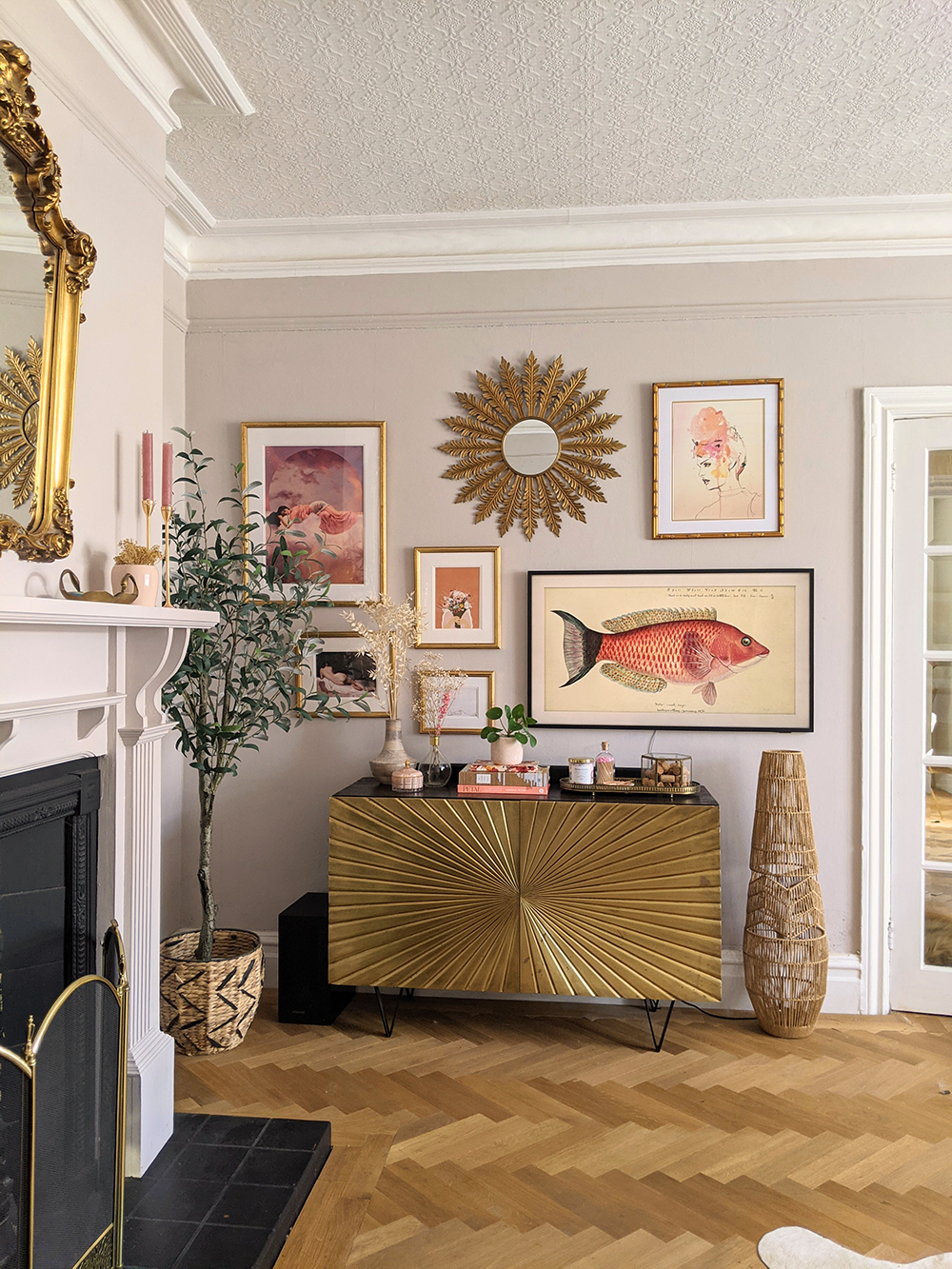 It really does feel that Samsung has addressed just about everything you could ever want and more in a television with the new Frame TV. The remote control even has a solar panel on it for recharging (yes really!) with minimal packaging. I also love that they’ve shared suggestions on how to reuse the cardboard packaging – from desk organisers to side tables but my favourite was – of course! – a cat house!

We decided to take them up on the challenge and build this out of the cardboard box the Frame comes in. Meisha was being very uncooperative of course and refused to go inside of it like a normal cat but I think she still had fun! Ha! (they do say never work with children or animals and this is why…) 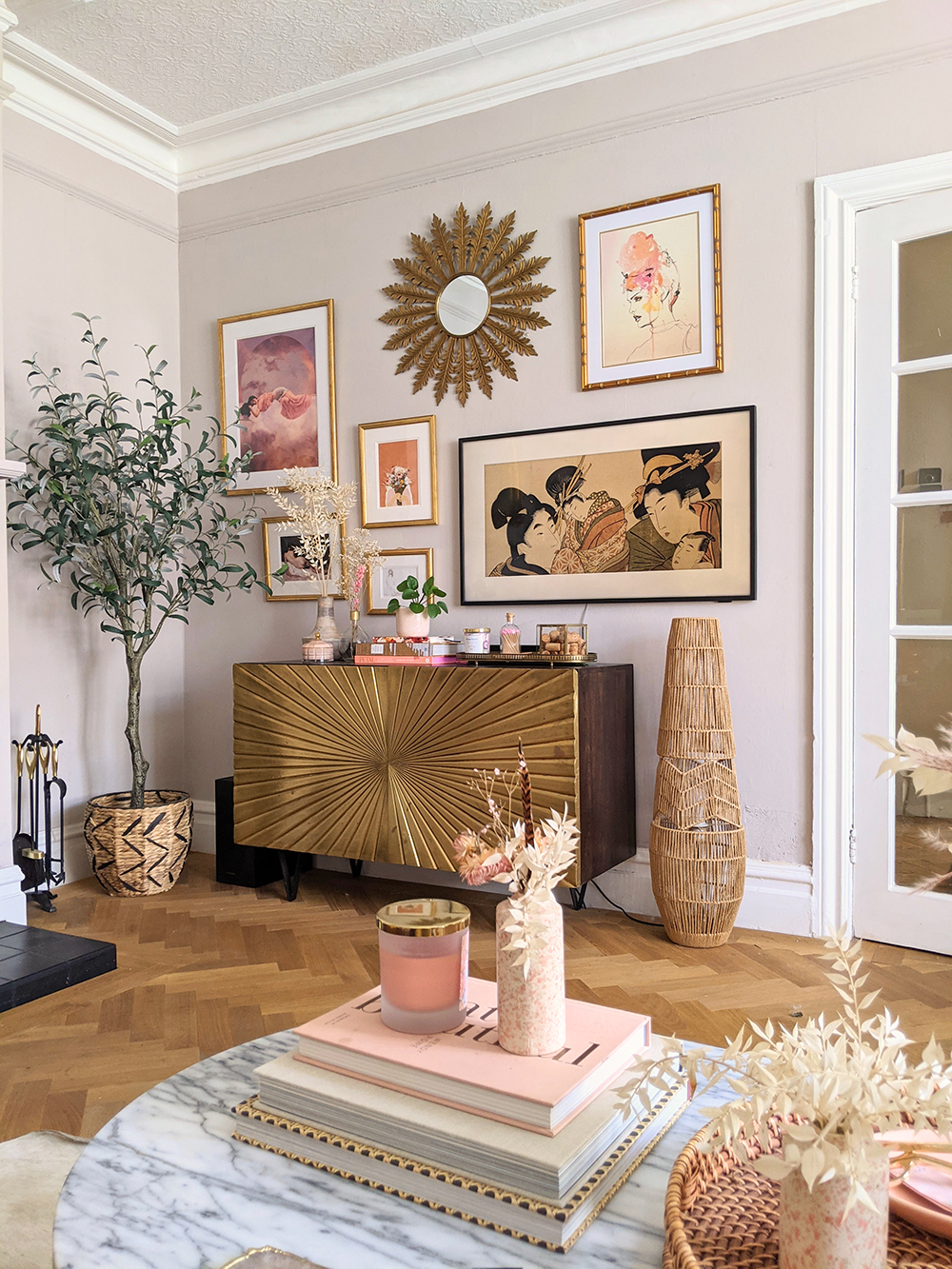 I was already impressed with The Frame TV and this has only further solidified why I feel it’s a great investment for anyone who loves high-quality technology as well as good design in any room of your home. I’m already now considering a third smaller version for our bedroom!

Huge thanks to Very for sponsoring this post and allowing me to review this beautiful piece of technology. If you’d like your own Samsung Frame TV, be sure to check out the full range of sizes they have available on the website.