11th Hour Upgrades: Finishing the Flooring in the Master Bedroom!

After 7 years of living here, we are looking to put the house on the market in the next couple of weeks. At this point, what we really should just be doing is giving the house a thorough cleaning and perhaps purging a few of our items. What we are REALLY doing is a complete overhaul on the hallway (coming soon) and scraping old paint off of floorboards. 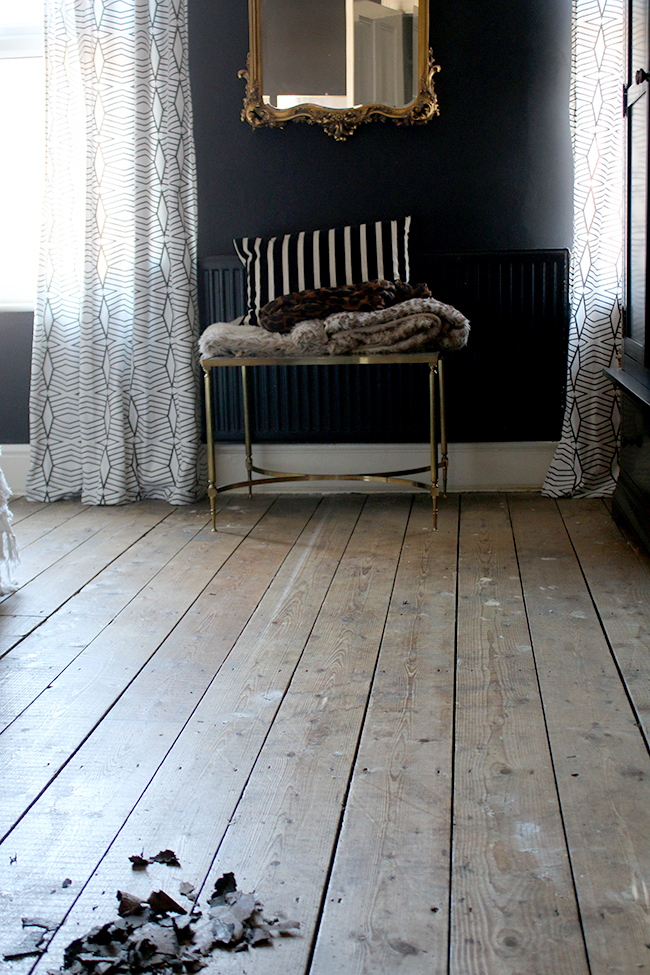 While the house is pretty much ‘done’, there were always 2 areas left of the house that we’d not touched. I had planned on doing them before we moved but life circumstances have a way of making you rethink things and while we had intended on putting the house on the market sometime next year, that date has moved up significantly and it looks like it’s happening in the next two weeks. Queue panic.

The first area, as I mentioned, was the hallway which had been severely neglected and just took a battering with all the DIY stuff we have done over the years. I’ll be sharing the update on that one in due course – we just need to get some lighting, a little additional styling and that will be ticked off the list.

The other was the bedroom carpet. It was old, stained and wasn’t looking its best but we’d decided, given our ridiculously short timeline, we could just rent a carpet cleaner in the next week and leave it as is. Not ideal but well, we were running out of time here and had to make do. I’d accepted the fact and moved on to other pressing matters. 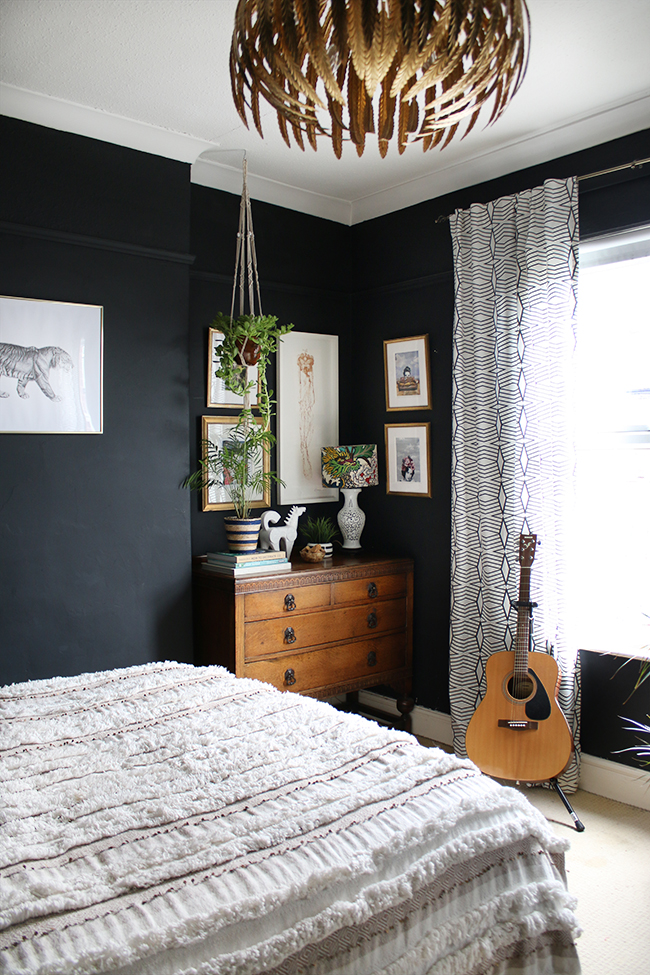 You’ll not find many pictures of the rug on my blog as I somehow managed to avoid showing too much of it in my pictures! But here’s what it used to look like.

Life had other plans. Ya see, my lovely totally housebroken dog, Quito, must have been feeling a little stressed. Normally, he doesn’t sleep in our bedroom at night but with my brother staying with us on and off for the last 8 weeks, we decided to break with tradition and allow him to sleep in our room. If Mike got up in the night, it would spook Quito and he’d start barking so we thought for the sake of all our sanity, he can sleep with us, door closed over and that will be that. Quito, of course, loved this idea and he’s been reasonably well-behaved for most of it. Until…

Sometime on Friday night, Quito decided that he would have a big, proper, full-on wee right on the bedroom carpet. It stunk. The carpet was absolutely soaked and we were aghast (I wanted to cry, to be honest – yes #firstworldproblems but still). The plan of leaving the carpet in situ was no longer an option – it really had to go. It was already only just about acceptable but this was the death knell. The next morning, we moved the furniture around the room, sectioned it off with a Stanley knife, rolled it up and the carpet was gone. 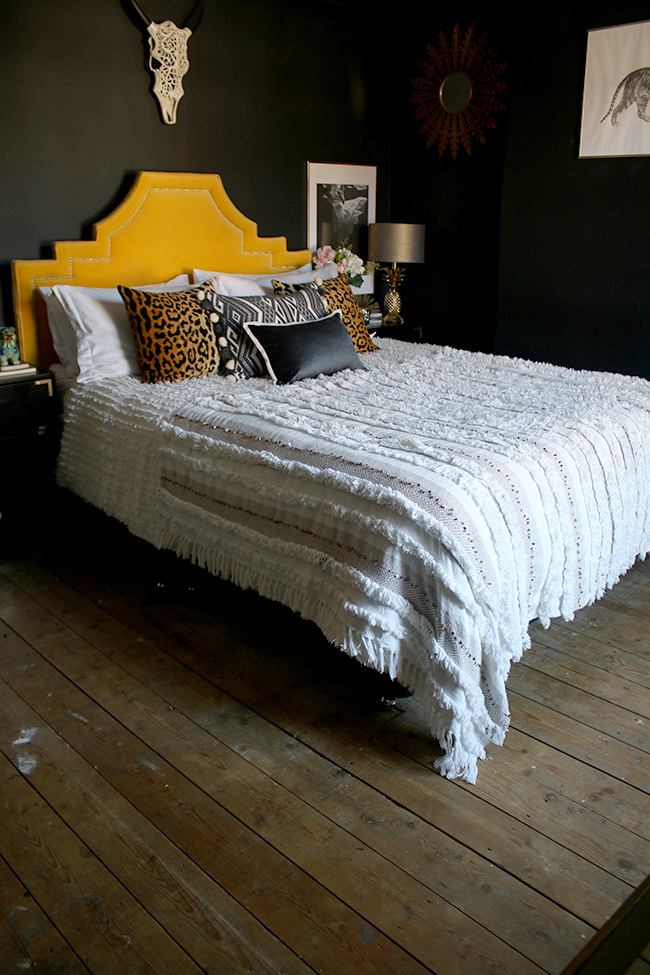 As an aside, there are a number of reasons a dog might be a bit stressed out and wee indoors. After a bit of research, we learned that three of the reasons could be: 1. A change in living circumstances (new baby, someone moving in, someone dying); 2. Construction in the house (we’ve been doing a lot of work on the hallway and just had a new stair carpet fitted the day before); 3. A UTI/bladder infection/health problem.  Well, we still haven’t ruled out 3 (taking him to the vets this week to be sure) but 1 and 2 were definitely ticked boxes. Shit.

Now, we don’t have a lot of extra space in our home and with the office currently being used as a makeshift bedroom for my brother, moving the furniture into there was not an option. We also need to get this done quickly. Thankfully, as you can see, the flooring is not in bad shape. These pics were taken before we cleaned and removed the paint but they look even better now. If we’d not already done the flooring everywhere else in the house, I’d be tempted to leave it as is.

Despite the fact it actually looks pretty good now after all our work, there is a problem with leaving it as is. Ya see, the upstairs hallway, office, downstairs hallway, living room and dining room all have the same dark stained floorboards. Looking into the bedroom from the hallway – well, it just looks really off and weird. The flooring needs to be stained to match or there’s no continuity. 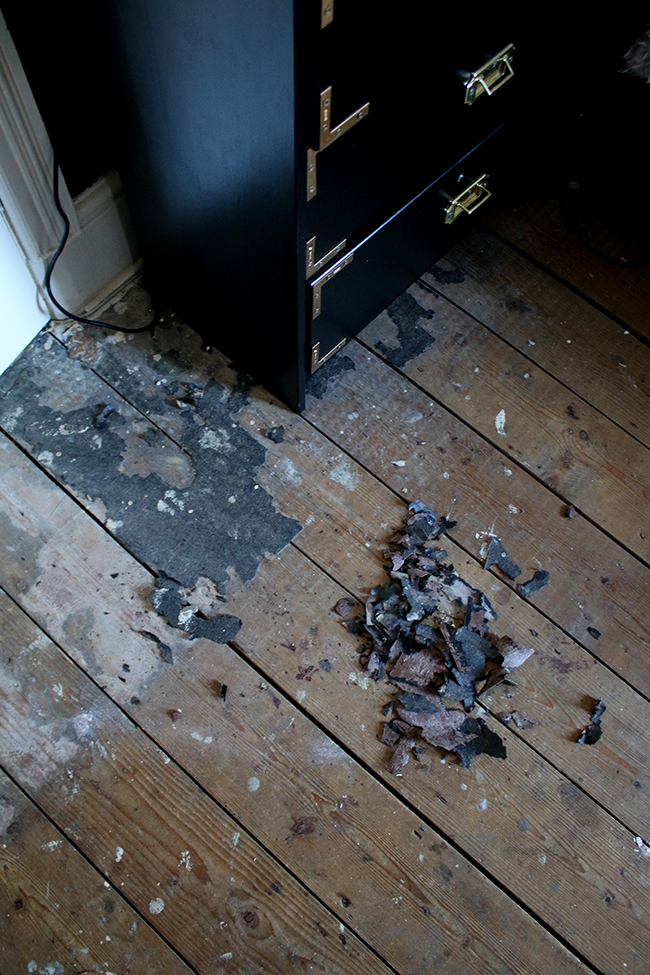 So, on Saturday, Wayne and I ripped out the carpet and the floors were hoovered and scrubbed clean. On Sunday, we scraped the paint and some leftover vinyl from the floorboards in preparation, did some sanding and cleaned again. They actually came up really well. All this week, we’ll be staining and finishing in sections. Move the bedroom furniture to one side of the room and finish the flooring on one side, wait for it to dry and then move everything to the other side, sand, stain and finish on the other. It will not be ideal, granted, but well, it has to get done! 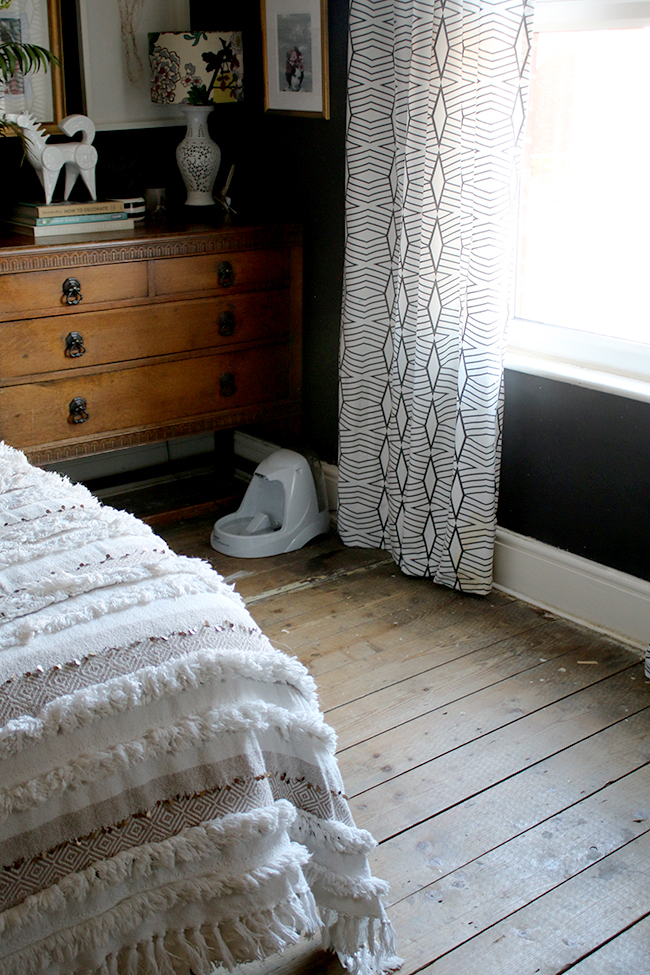 Excuse Meisha’s cat fountain there in the corner!

Do I wish we had done this years ago? Absolutely! Do I actually rather like what it looks like even now? Yep. Is it far better than some crappy worn ugly carpeting? Erm… yep. Lessons learned!!! I swear in our next house, flooring will be one of the first things we tackle – we did it so backasswards in this house but well, these are the things you take away from a project I suppose! 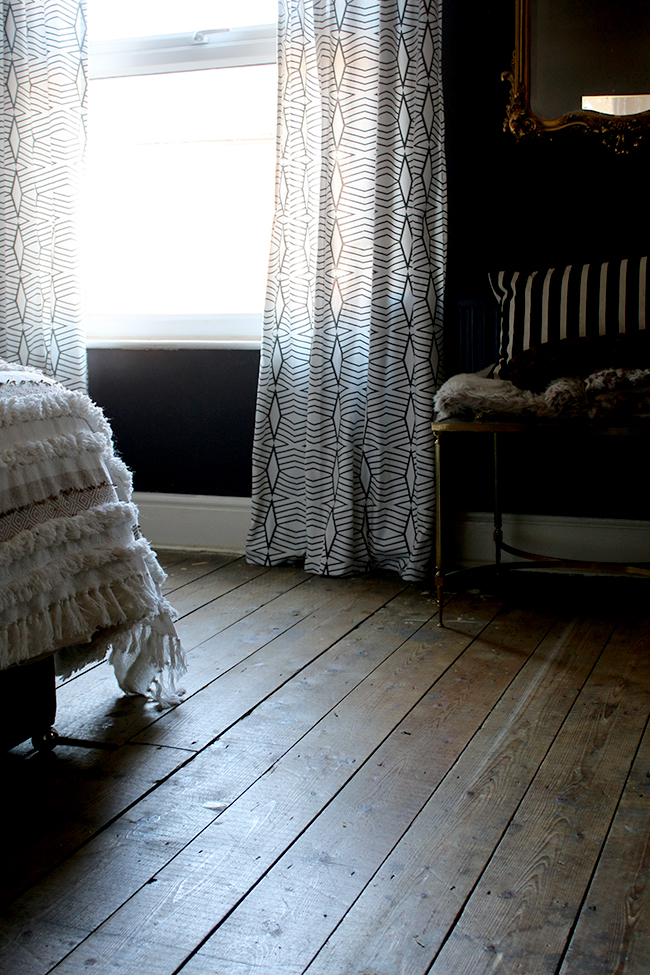 So please wish us luck for this crazy project and hopefully, I’ll be able to share with you the finished result soon!

*For those wondering, it’s a long story as to why we are putting our house on the market now instead of next year, mostly having to do with Wayne’s job, mortgage rates and the current housing market in our area. Looking at all our options, we realised that waiting was not the best option for us and we’d do best to sell as quickly as we could before Christmas.