Late last year, Wayne’s mum moved into a new flat. Well, it was new to her but not technically new. Ya see, it was a long ol’ process getting her into this flat. Wayne’s mum is a widow and an OAP and sadly, had to give up her house a few years ago after her husband died. This meant she moved into private rented accommodation which was expensive as well as rather unstable. When her last landlord decided he wanted to move into the house he was renting to Marjorie, we realised that she couldn’t keep bouncing from one rental property to another. It just wasn’t the nicest thing for her to be dealing with. She needed something that was secure, that she could relax and make herself at home in.

Thus began a 5-month process of trying to get her a flat through the council. For my readers outside of the UK, essentially the government will provide housing to those most in need and well, Marjorie was in need. After being forced to move out, she moved in with Wayne’s sister but it wasn’t an ideal situation for anyone – 3 adults, 2 kids and 3 dogs in a small 3-bed house. It was clear that she needed her own space. It took quite a while for everything to go through but eventually, with the help of the Council, we found ‘the one’. A flat not far from Wayne’s sister’s house in the perfect location in a building that was less than 10 years old that was strictly for over 55’s. It was a big flat – a lovely 2 bedroom with wonderful natural light and she could stay there as long as she wanted with no worries of ever moving again if she didn’t want to.

The only snag? The previous owners had done a number on the flat itself. It had been horribly neglected, it was stained with cigarette smoke and had not been taken care of at all – I also have NO idea what they were thinking when they chose paint colours! The previous tenants were forced out and Marjorie was able to move in but we had a lot of work to do to make the flat look appealing and cared for.

Brace yourself for the before pictures today – I can hardly believe the flat used to look like this! 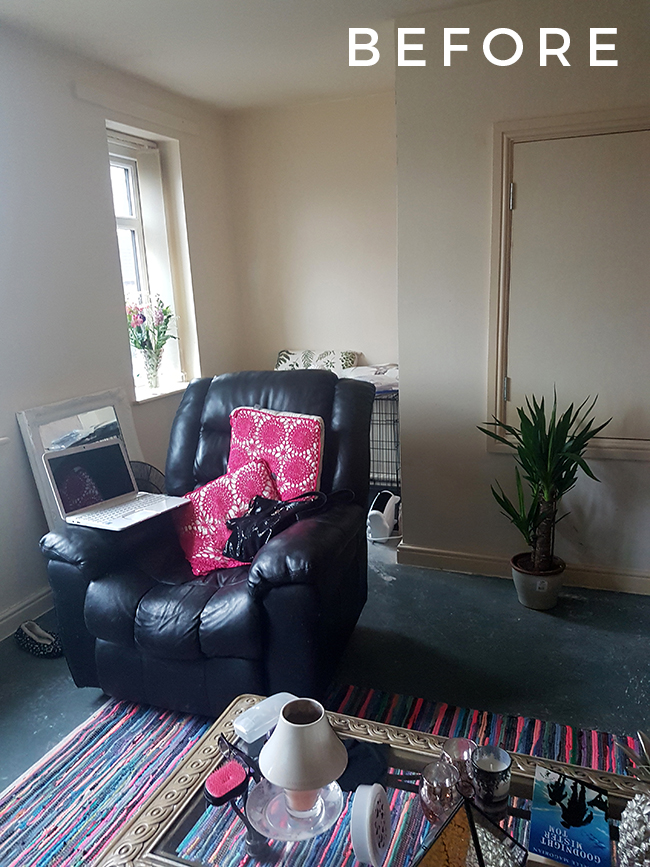 All the carpets had to be ripped out because they were destroyed by previous tenants so concrete flooring was what was left! 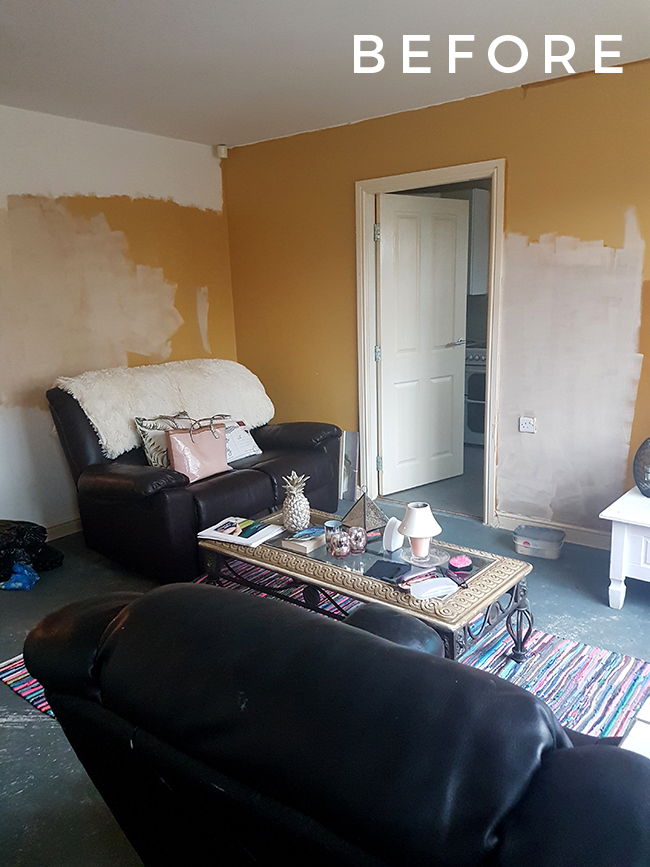 I mean, did they decide to paint that putrid yellow and then decide against it and then just left it?! WTH? 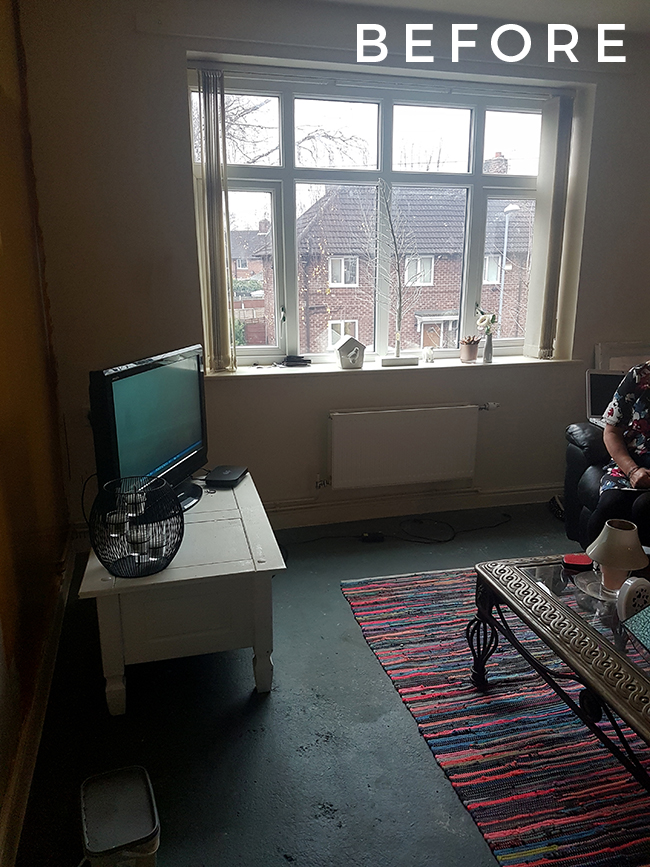 At the time, I hadn’t realised we were going to be doing a full-blown makeover so excuse the crappy phone pics but it’s pretty bad, right?

Well, over the following few months, the whole family has pitched in to help refresh the space with fresh paint (Dulux Dusted Moss 2 – it’s what I have in my living room!) and Wayne arranged for new carpets to be put down in the living room and bedroom. I got her some lovely wallpaper to give the place a splash of colour and we replaced the light fittings with something a little more sparkly. Of course, this was just the beginning of the makeover to come. 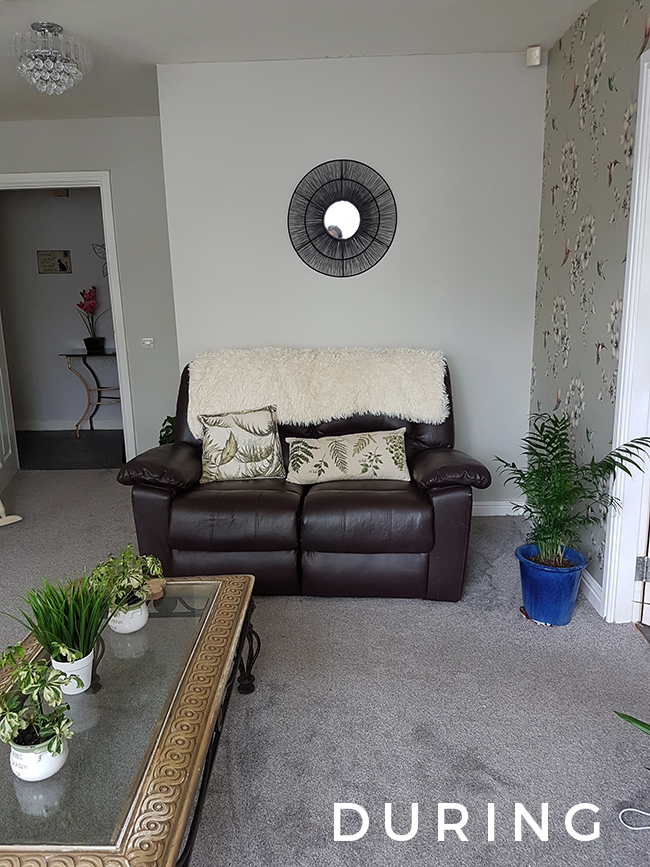 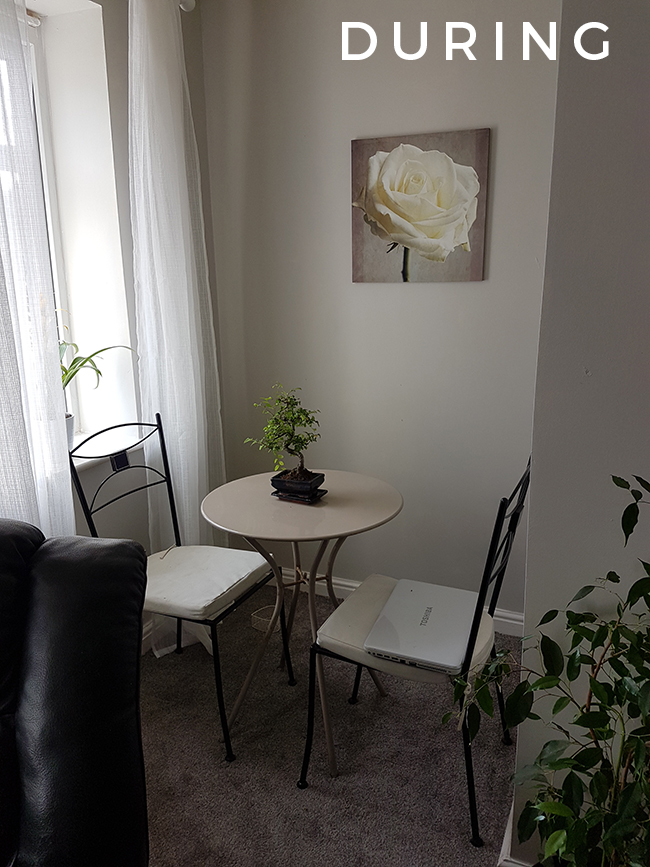 Between us, all of the changes made by that point had cost quite a bit of time and money but we knew the place still had a lot of potential. This is where my wonderful sponsor stepped in. You may know that I’ve been writing for Oak Furnitureland‘s blog for 4 years now. They are a great client and I’ve had a lovely relationship with them for years. When they heard about our project, they happily said they’d love to work with me to supply the things that Marjorie needed. You have no idea how happy I was to hear this. Finally, Marjorie was going to be able to have some lovely furniture to finish off her flat! Needless to say, Marjorie was so excited!

So the last month or so, I’ve been pulling together a design plan for Marjorie to create a lovely soft romantic look to suit a modern 60 something woman. With a few extra touches, including artwork and a couple of smaller Ikea pieces, this is the look we’ve gone for.

The sofa and armchair are Oak Furnitureland’s best-selling Amelia range. We also went for a beautiful natural oak sideboard and a small oak dining table with 2 natural seagrass chairs to add some texture and create a small dining area. Alongside this, some soft feminine artwork and a stand for Marjorie’s many plants.

The delivery is scheduled soon and there is still a bit of finishing work to do to get the whole thing dressed but it’s coming along so nicely and I’m so excited! I’ll be sharing the final makeover with you at the end of the month so stay tuned!

In the meantime, what do you think of the design plan?