So it’s been 8 weeks since I shared any updates on the man cave and I actually feel rather guilty about that! The whole remodel has been a bit slow going with all the little crappy bits and pieces that needed boxing in/fixing that Wayne had been getting to as and when he had a couple of hours. And then before we knew it, summer was here and with that, weekend plans and things to do and suddenly, it’s 8 weeks later and you go WE ARE PAINTING THIS WEEKEND DAMMIT and so yeah, magically there’s progress. 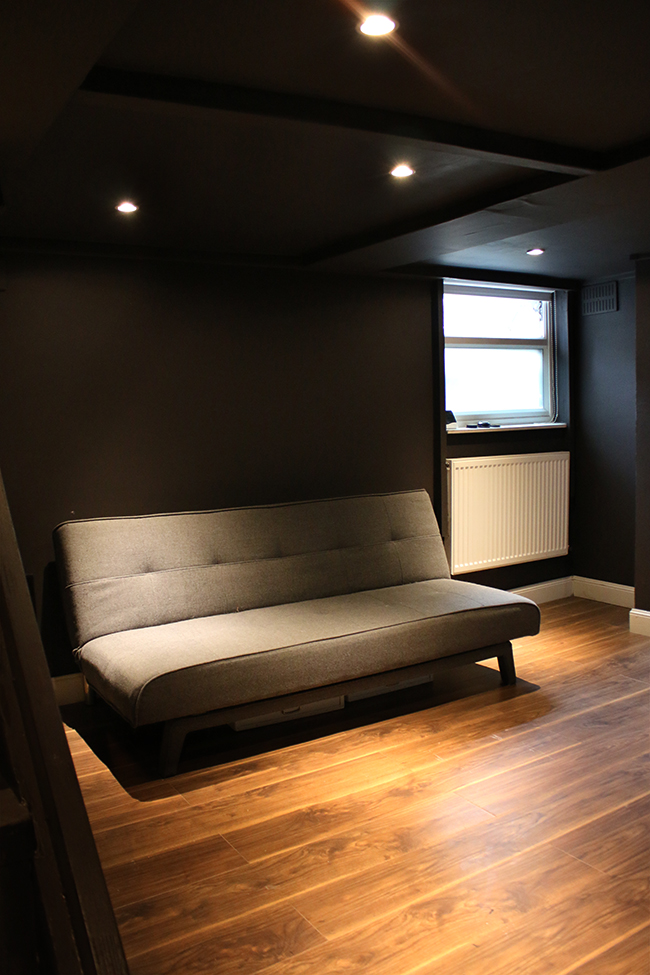 Now, we’re very very clearly not yet done down here but we’re now to the final bits and pieces and then I can just dress the space and call it (mostly) done. The most transformative things we’ve done as you can see is paint everything in the gloriously rich Tanner’s Brown by Farrow and Ball who are one of the lovely sponsors of this project. I actually approached them about working with them on this one after falling in love with their paint when we used it in the dining room remodel. And once again, it has not disappointed. 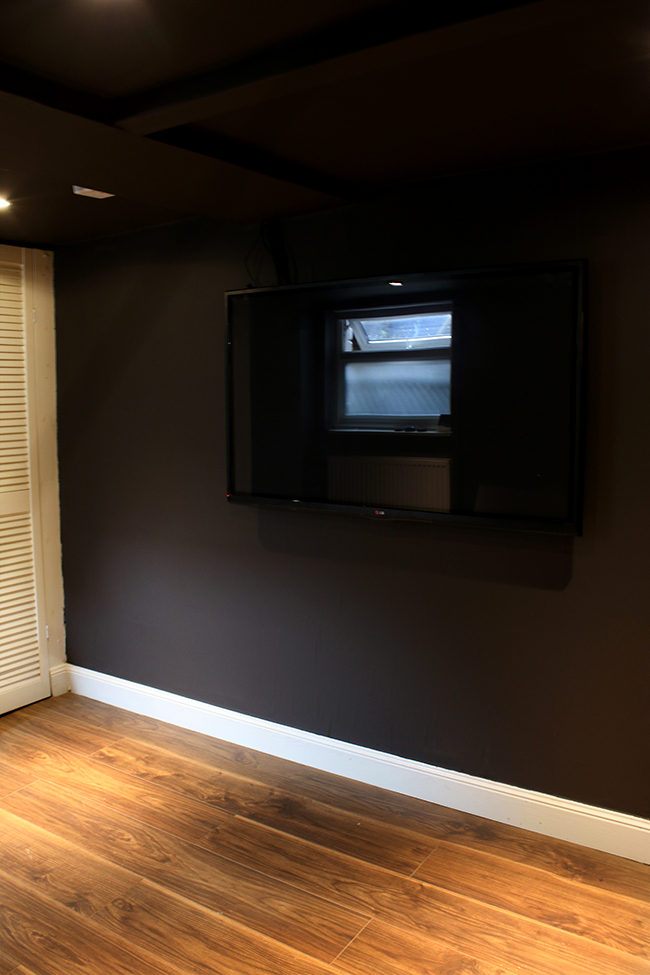 In pictures, you might assume it’s black but the best indication of the colour is above where the natural light from our one small window hits it. I wish I could accurately describe the colour because it is so nuanced. It is neither black nor a true brown. There are purple-y undertones but it’s not really purple and it’s a little bit grey but there’s a rich warmth in the colour so I hesitate to call it grey. No matter what, I absolutely love it – which for me to like a ‘sort of brown’ is crazy I realise but this is no normal brown paint. Not just that but it goes on like a dream. Two coats covered everything wonderfully. 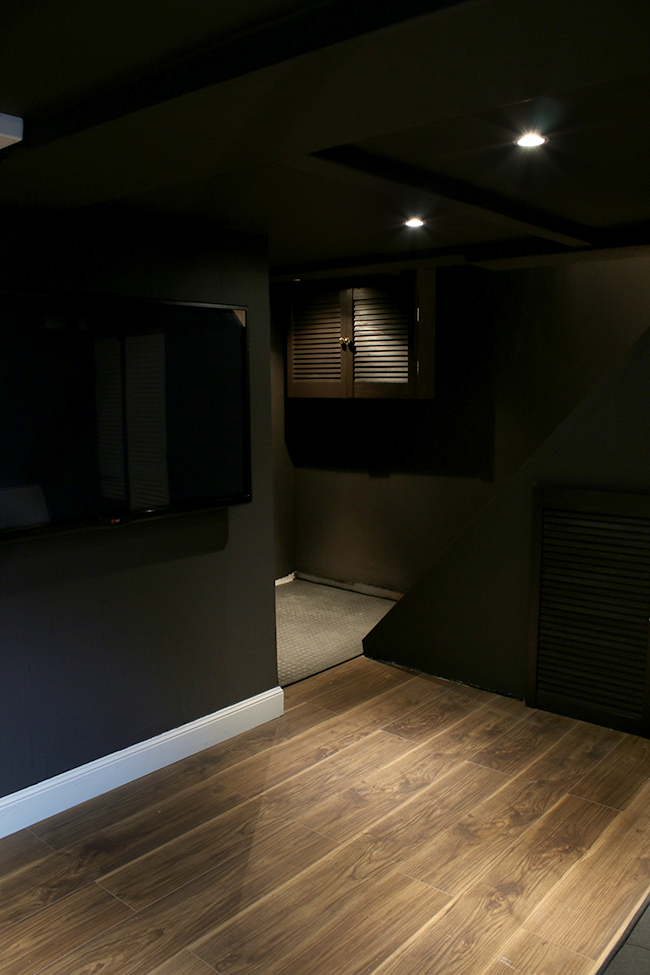 The beauty of going dark down here is that all those little higgledy-piggledy bits and pieces that have been boxed off (mostly cables and electrical wires as we can’t drill into concrete to hide them) now sort of disappear when you are down here. In white, the room always looked a bit dirty and grimy and now it’s just beautifully cosy even with nothing in the room. Also, that huge 50″ television is no longer such an eyesore! 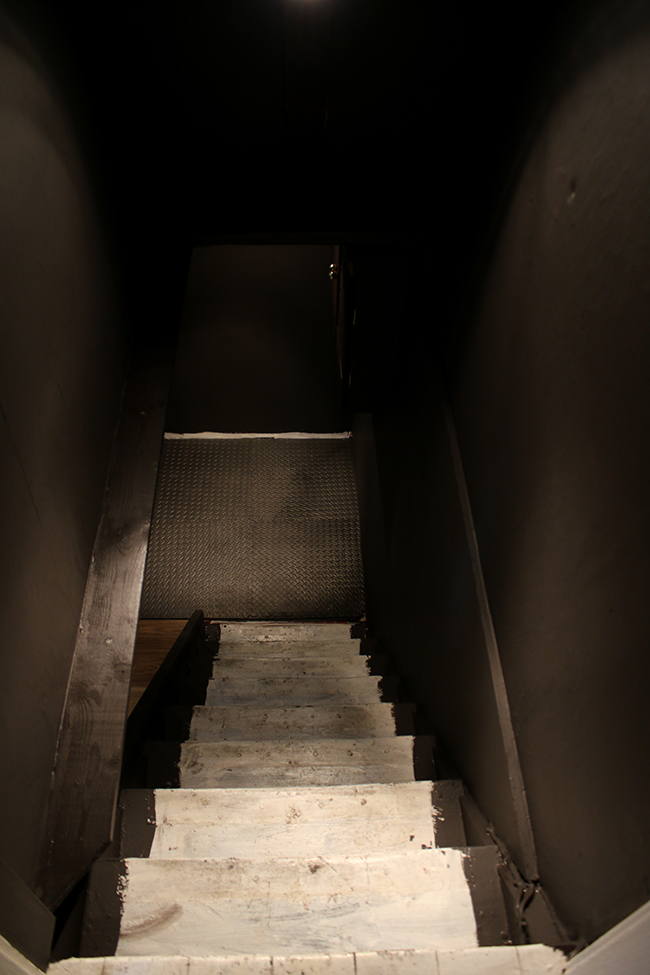 Welcome to my lair….

Now, I will admit there is always a point at which you go very dark in a room (back me up, here, peeps who’ve crossed to the dark side) when there is a moment of panic. Where you start to see the full effect and think, ‘Oh my god, we’ve made a horrible mistake’ and that moment came when I looked down the stairwell which has also been painted and I remarked to Wayne, ‘It looks like the entrance to some seedy nightclub…’ and he responded, ‘Yeah, actually, it does.’ Oh crap. 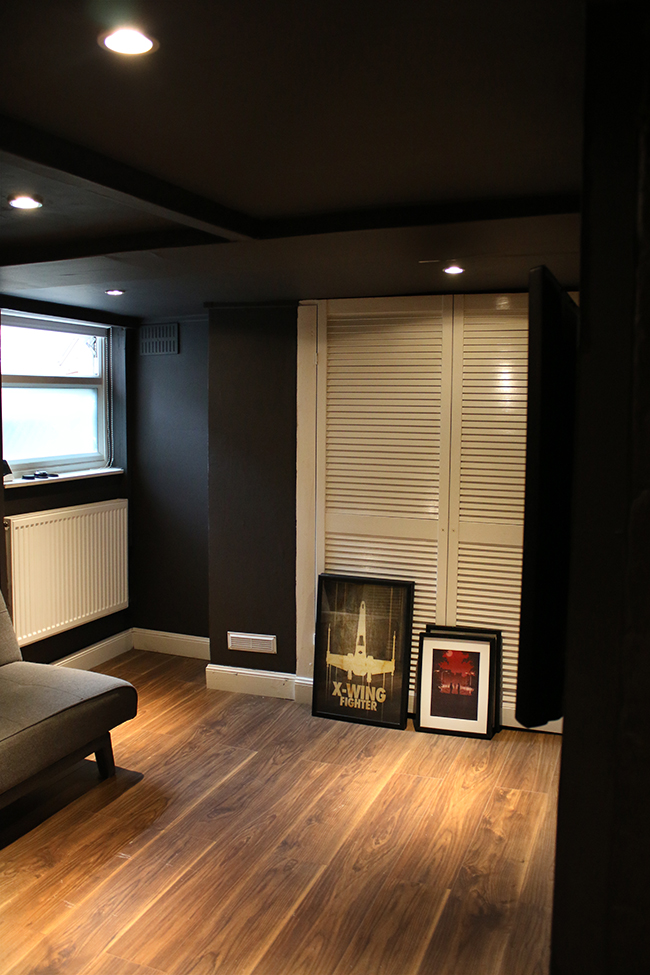 But this just shows the importance of finishing off a room – that mid-way point is just always such a weird one. When the room hasn’t quite come into its own and it’s still unfinished and it just doesn’t look like you’ve envisioned. Not yet anyway. But I know full well that once we put some art on the walls, add accessories and a rug, some shelving and lighting… it will indeed look amazing and not at all like some seedy underground club! 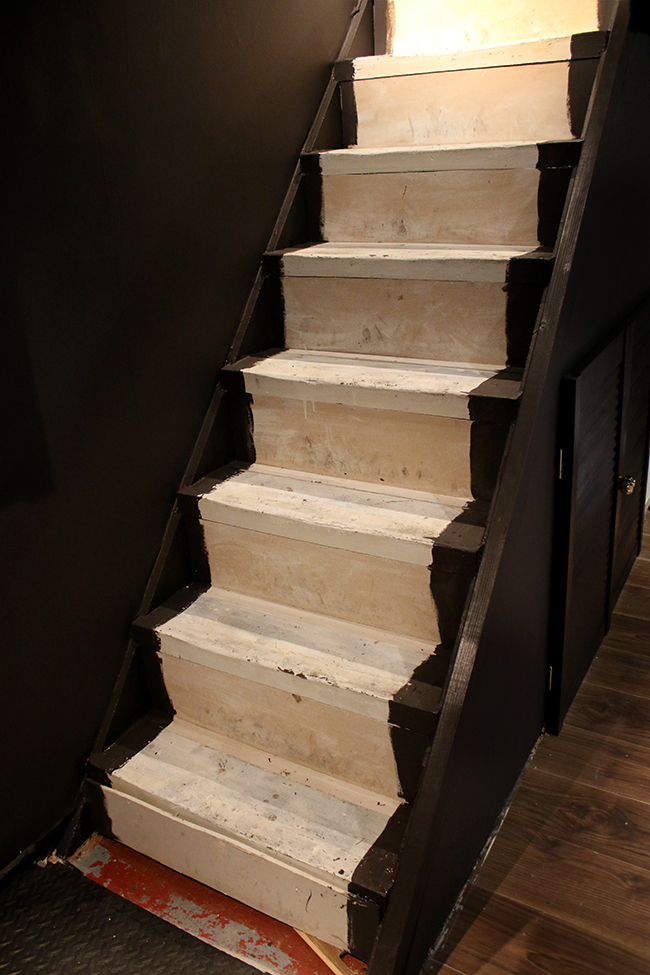 Ignore the bit of black matting at the bottom of the stairs as well – that will be going and was just temporary as this is actually the area where the cats normally eat their food so it was just to protect the flooring for a while. I considered removing it for the pictures but after doing so much work on the room this weekend before I took the pictures, I really just couldn’t be arsed!! #keepinitreal

So… what’s left? Well, we realised we didn’t have the right primer for the already painted louvred doors so that’s why they are still white in the pictures so those need doing. And I will probably be painting that bright white radiator out but again, I just need to get some primer on it before painting. We need to replace the door to the little storage area (not seen in the pics here) with another louvred door which will be painted. We have to get some lengths of skirting board for that area at the bottom of the stairs too. Of course, we need a stair runner for the stairs as well. 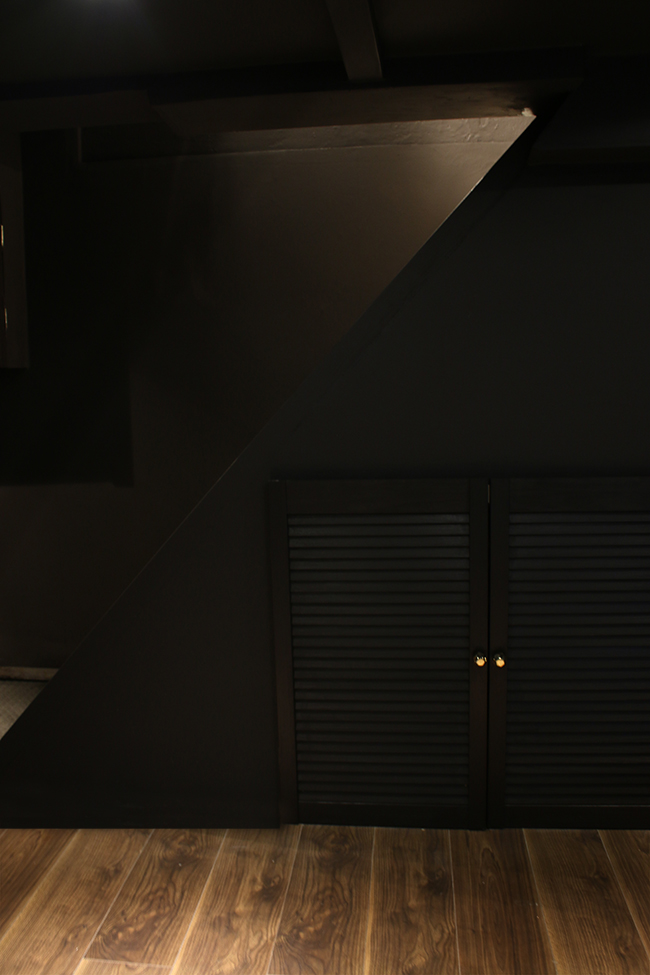 I also still need to pick up a few bits like the shelving unit and I’m still waiting for the gorgeous gold sideboard from Swoon Editions. I also need to get some lighting in here which I’m hoping to have by next week. 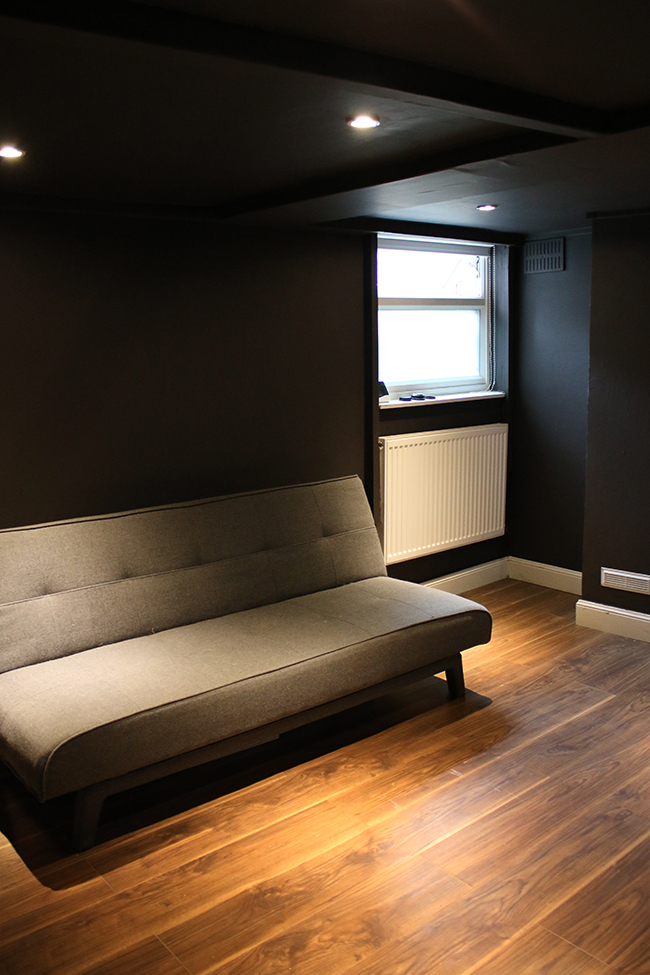 So that’s where we are on the cellar remodel/man cave/glam snug. There’s definitely progress being made and I’m absolutely itching to get things finished down here as I know we are now in the final stretch! But what do you think of the progress in the meantime? Do you think going dark and sultry was the right decision for this underground space?