Getting the Garden Summer Ready!

So we’ve had some amazing weather the last couple of weeks and with that, I’ve been able to do a little refreshing in our garden which was sadly neglected all winter and really needed a bit of TLC! I thought today, I’ll share a little bit of the progress we’ve made but I have some bigger, grander plans coming soon so there will be more… 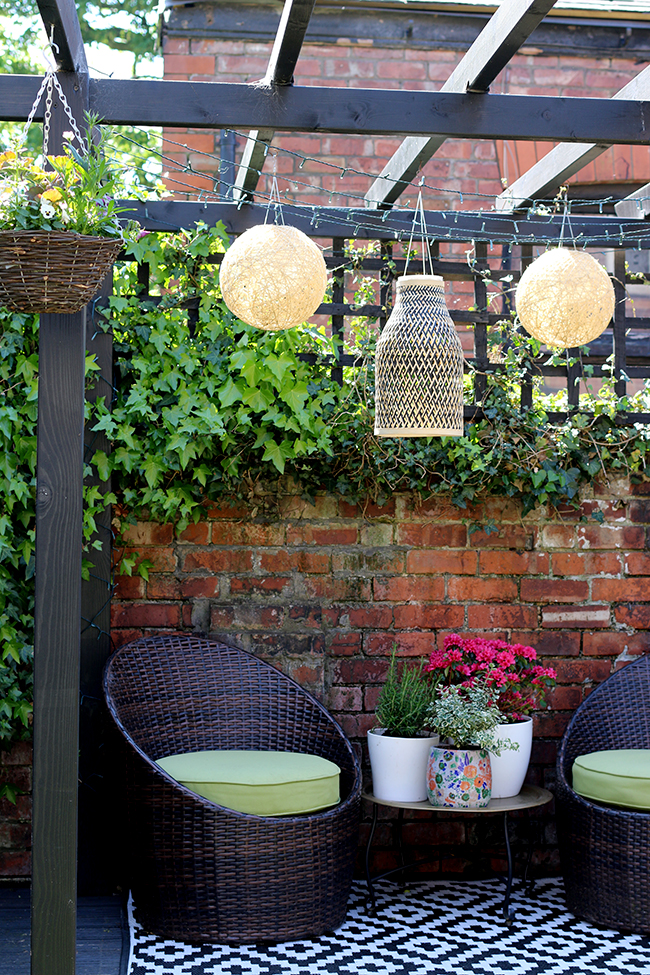 I shared a bit of the progress over on my Instagram Stories (how many times can I tell you guys to follow me there? I told ya I’d be using it loads and I do so you’ll get sneak peeks of pretty much ALL THE THINGS there) but I wanted to give you a little update here on the blog too. 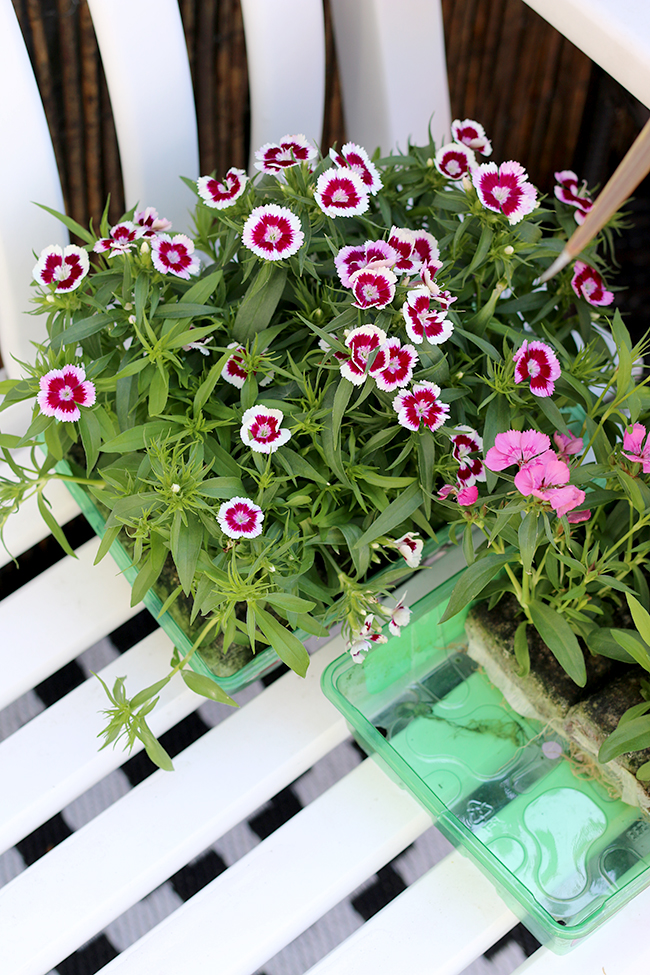 This post contains a few affiliate links indicated by an asterisk (*) – you don’t pay any more if you click on these links but I might earn a few pennies towards more pretties for the garden so ya know, win-win.

The first thing we did was just clean everything up about a month ago – cleaning all the furniture and clearing away all the dead stuff for a nice clean slate. Last week I finally got around to painting the deck (the one nearest the house) in Cuprinol’s Black Ash* – it’s the same colour as the pergola and shed (which we completed last summer if you hadn’t seen that) and it just tied both spaces together so nicely. 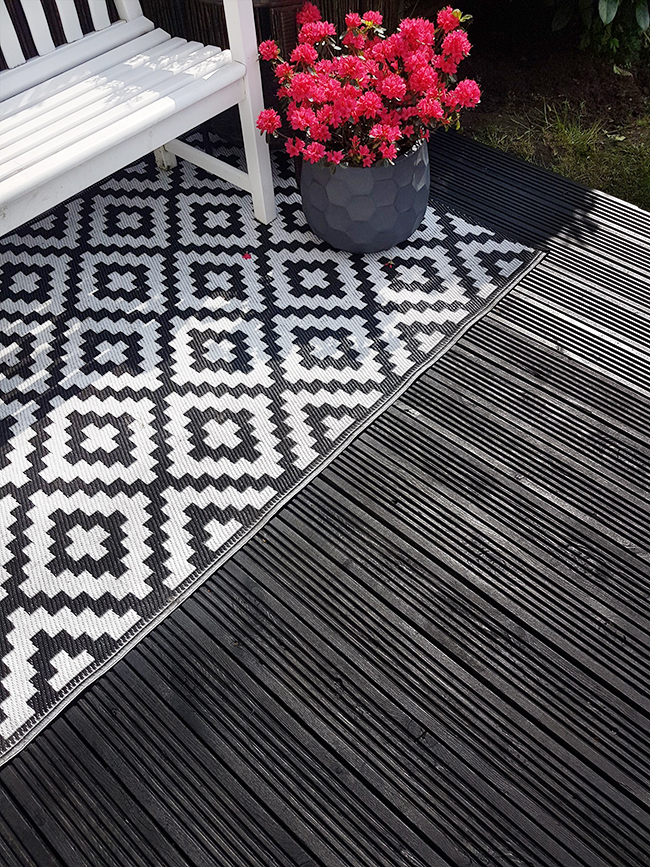 This is what it looked like before – the stain was a bit worse for wear and there just was a lot of dirt and crap that needed to be cleaned from the surface. 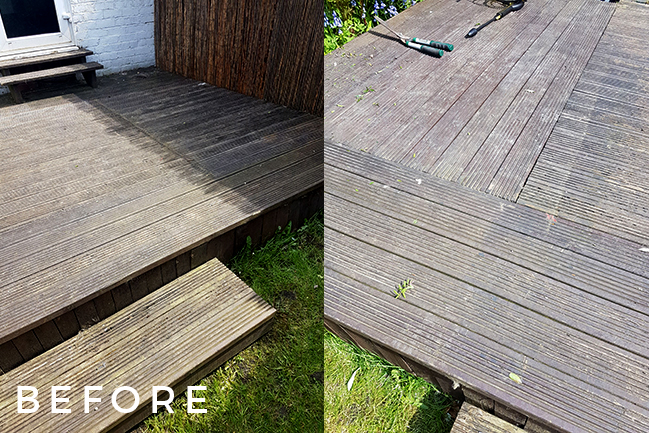 The first thing we did was use this ace little Karcher pressure washer* we bought from Amazon. It genuinely did a cracking job just removing all the months of dirt and grime as well as any loose and flaking old stain. 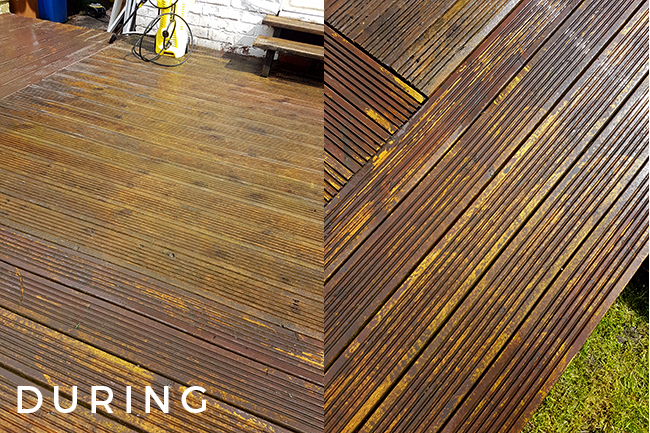 Once it dried, I gave it two coats of Cuprinol Ash Black and here’s how it looked when it was all done… so much better, right?? 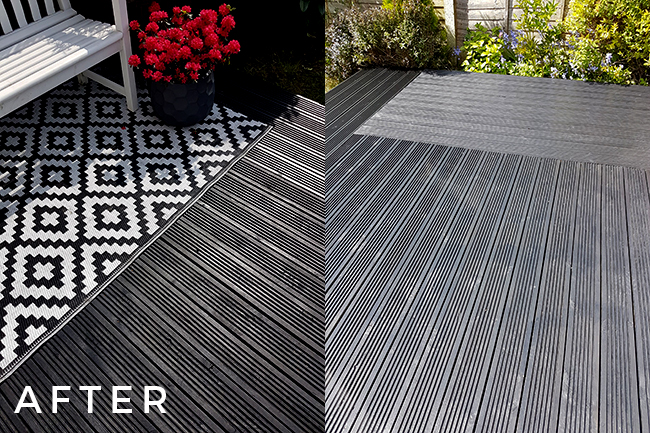 Now, I adore black in garden design – I just think it looks so chic and similar to using dark colours inside, everything just pops against it. Of course, inside it does make a space look darker (duh) but outside, you just don’t have that problem because hello, you’re outside and there’s just a lot more light. #statingthebleedinobvious. If I was able to, I’d want to paint all the fencing black too but alas, we share our border fences with neighbours on both sides so there’s no way I could do it and not get drips on the other side – and I don’t think our neighbours would appreciate that! So I have to look for other ways to add it within the garden itself. 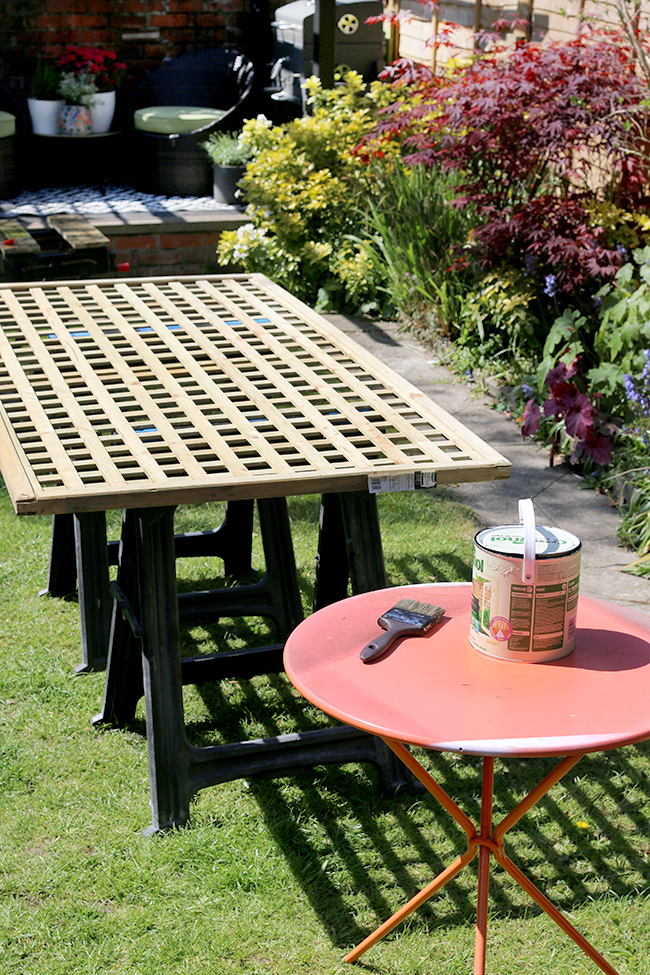 One of the ways I wanted to do that was with this privacy trellis. At the moment, we have a side return on the house where we store our bins. For my American breathren, this is really common in Victorian and Edwardian properties. Basically, it’s a little area at the side of the house where the original door from the kitchen to the back garden would have been. It’s speculated that it made access to an outside toilet more convenient but now they are basically just a bit of a wasted outside space and thus it’s become a place for our bins, DIY crap and where the stuff we need to take to the tip sits and accumulates (oh wait, is that just us?). 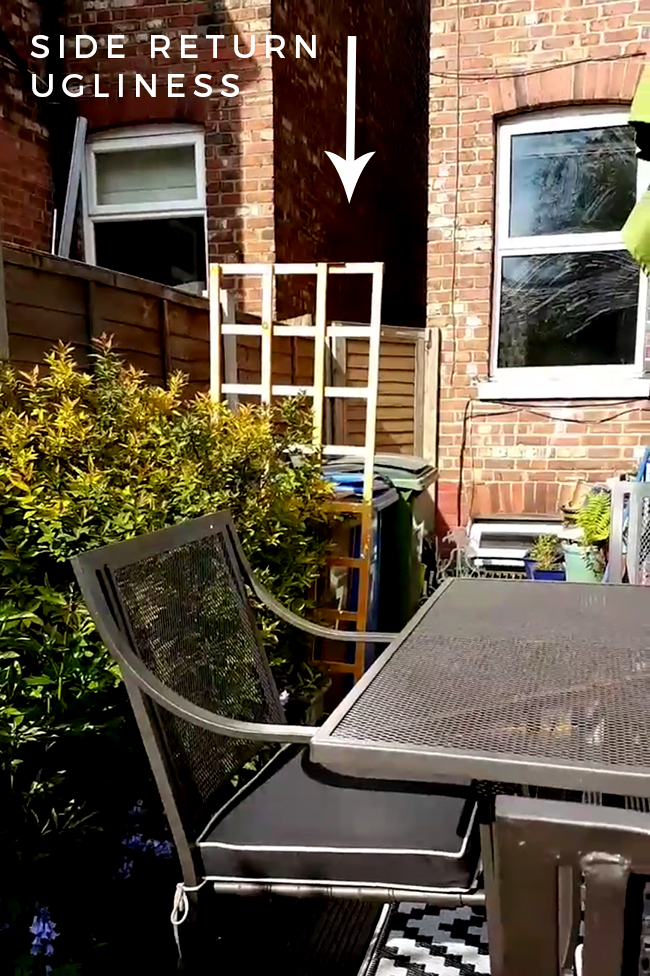 Anyway, I hate that when you are sat at the back of the garden (in the little pergola area) you can see straight into that side return and you are basically just looking at a bunch of ugly plastic bins. Ignore that bit of trellis you see in the image – it’ll be the nicer larger piece of trellis (below) that will be attached to the fence and all that crap needs to be cleared out! When it’s all done I will, of course, share it with you but I think it’ll be a bit of an improvement! 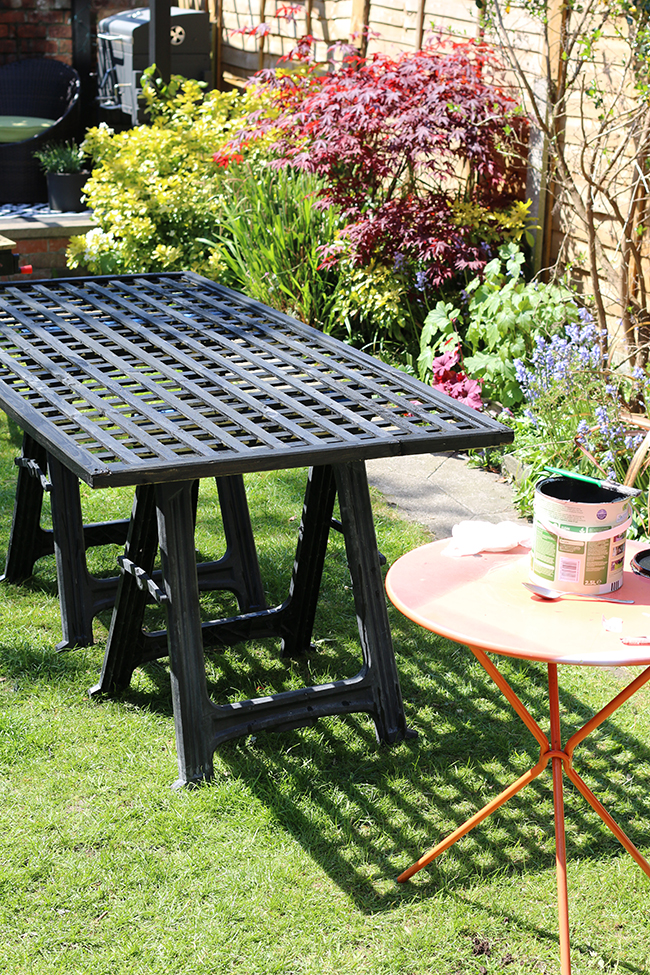 We’re also adding a bit of trellis to the top of the pergola at each end. 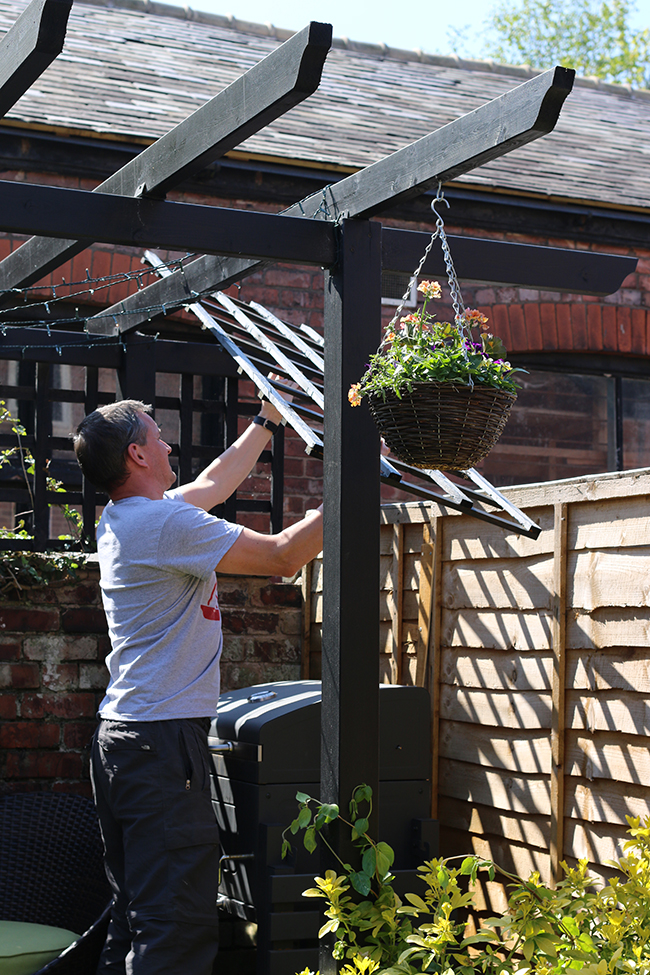 While it’s not something you would notice just looking at it, when you are sat under it, it just makes it feel a little bit more enclosed which I really like. It’ll also give the ivy something else to grow onto so that the entire thing in the future should be covered in greenery. 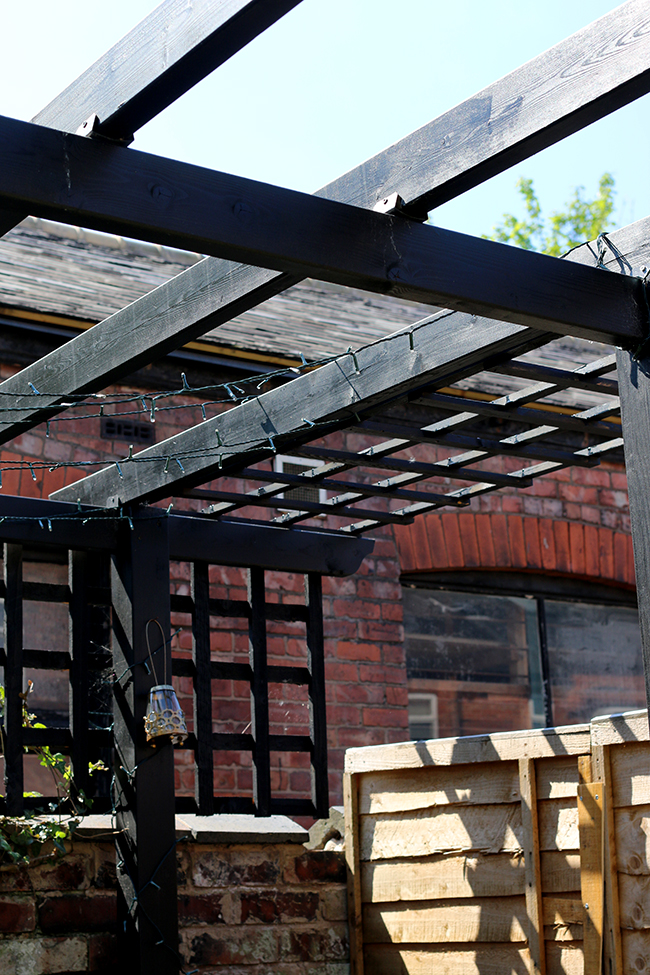 Oh and have you noticed?? THAT HORRIBLE SCAFFOLDING THAT WAS UP FOR 2 1/2 YEARS IS FINALLY DOWN! CAN I GET A HELL YEAH?! It came down over the autumn and honestly, I could not be happier for not having to look at that in the back garden anymore!! 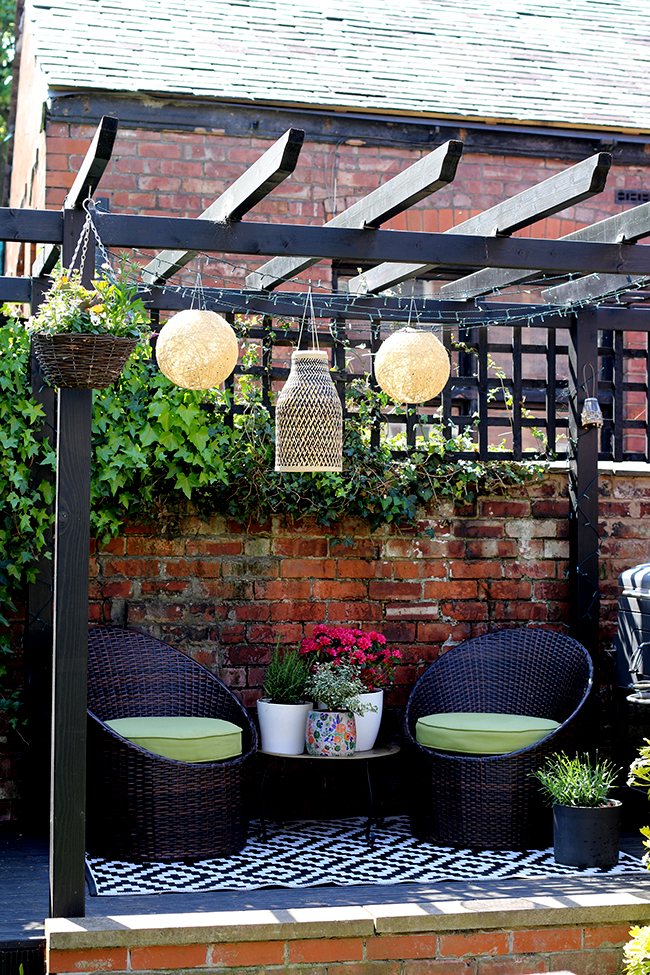 Ahem! Moving on! I also got some new festoon lighting for this little corner which I quite like. That bench will be going however as I want to replace it with a comfy sofa that we can really lounge out on! And I’ll be getting a new little table for here as well. So you’ll be seeing some improvements in this corner coming soon! 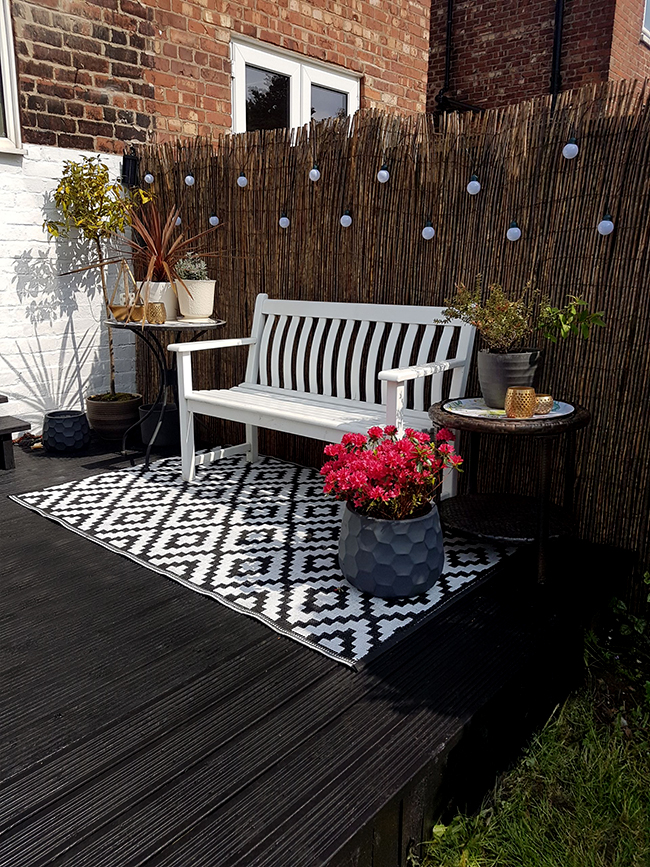 Improvements to this area coming soon!

You might also remember these turquoise ceramic artichokes I’ve had literally for YEARS (they were in my living room until the great turquoise removal of 2015).  I sprayed them with a glossy black spray paint (Rustoleum Painter’s Touch in Black Gloss*) that I already had and they instantly got a chic new look. 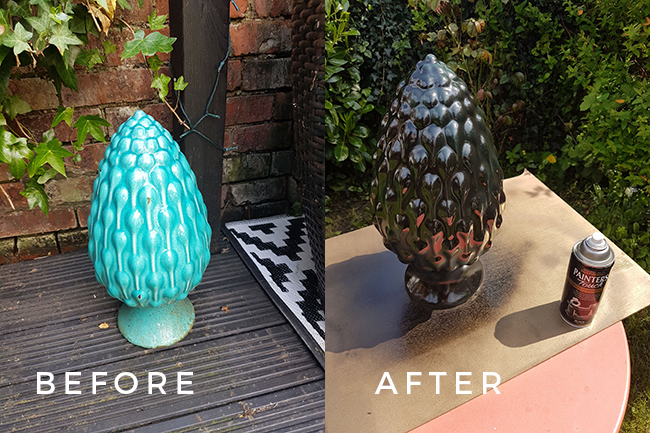 Of course, the whole area needs a bit more styling up – a few more plants will be coming in here and I’ll be dressing the space all up all ready for the big reveal on the 29th May to kick off the #UKHomeBlogHop My Summer Style series along with 26 other UK bloggers so that should be fun. 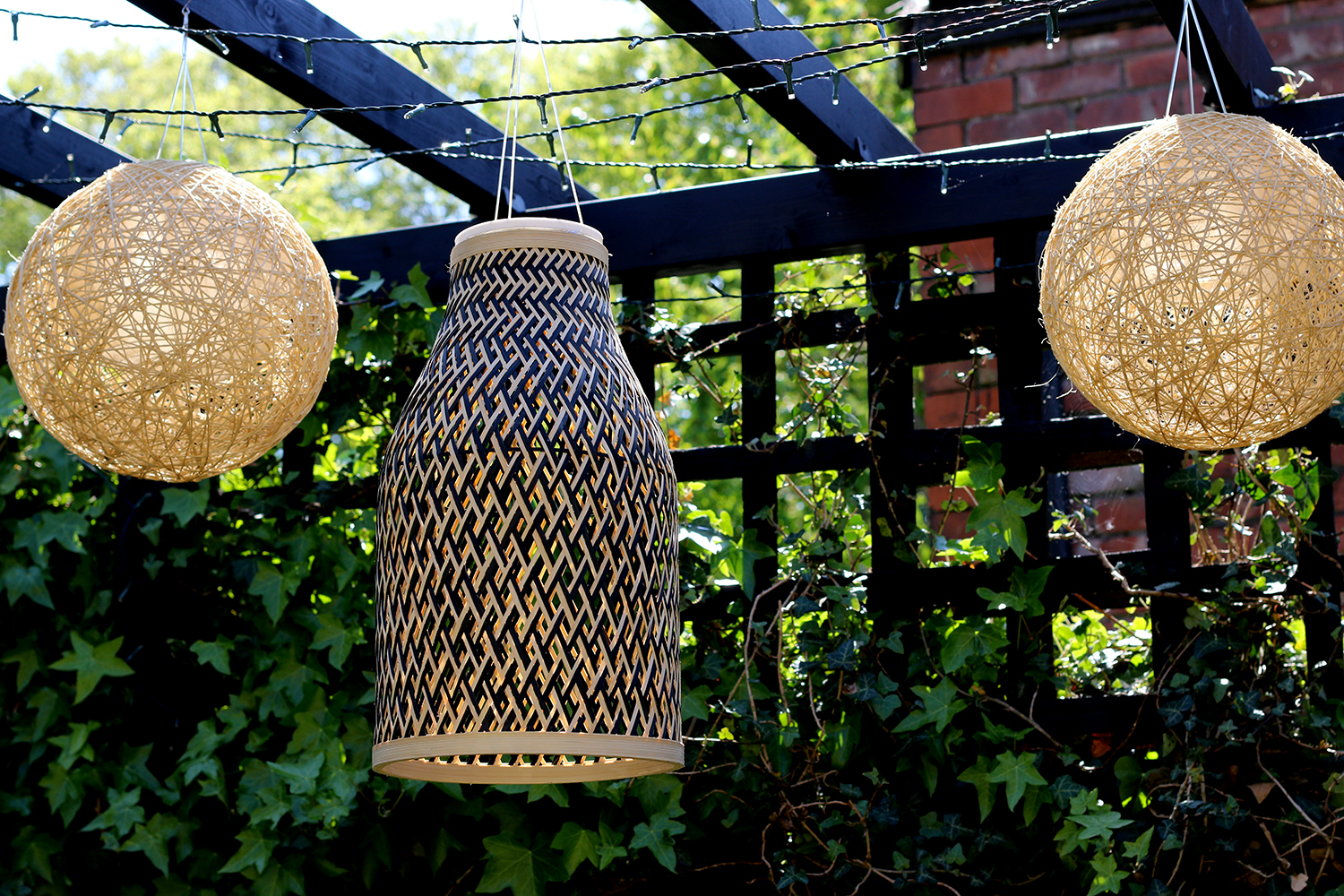 On Wednesday, I’ll be sharing the tutorial for those cute boho-style bamboo solar lights you see above too so stay tuned for that!

In the meantime, what do you think of the updates so far? Have you been doing anything in your garden this Spring so far?