A Long Weekend in Aberdaron, Wales

So first off, I must apologise for the radio silence around here. I basically completely misplanned my posts and realised I hadn’t told you guys I was going to be away for a few days! Ack! I’m back now, however, and wanted to share a little bit about where I went – Aberdaron, Wales. 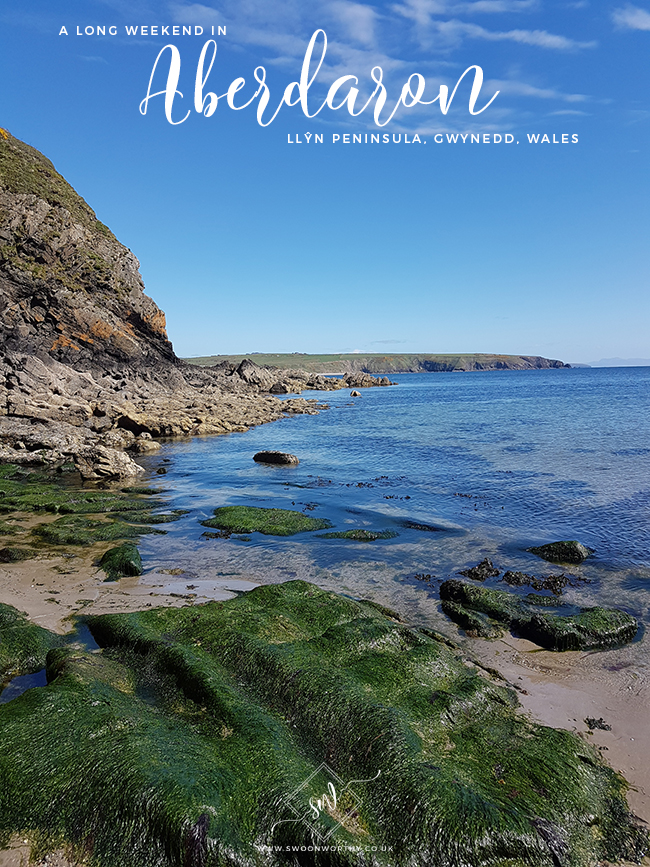 Last year for Wayne’s birthday we had a little holiday in Wales, renting a dog-friendly cottage near the beach and taking Quito with us. We enjoyed the experience so much, we decided to do the same again this year.

There’s just something about escaping to an area that’s a little more remote, a little less populated and unspoilt that settles me. The sea and ocean have always been my ‘happy place’ – it’s where I feel the most connected to nature. I don’t know if it’s a genetic thing. My parents are from the island of Puerto Rico in the Carribean so perhaps it’s something instinctive in me that being near the water just feels right. 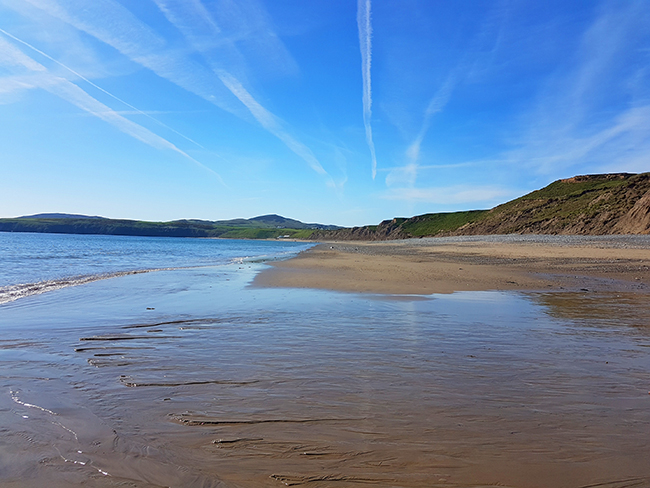 Before moving to the North West, I lived on the north Kent coast for a few years as well and loved it. One of the flats I lived in was right off Minnis Bay and I could see the sea from my balcony. I loved that flat so much. So moving to an area like Manchester which is land-locked (indicated by the little red dot between Liverpool and Sheffield) has meant I need to actually drive somewhere to the majesty of a body of water whenever I can.

Wales is only half an hour by car but getting to the furthest reaches of the coast takes a little longer. We arrived at Aberdaron (population less than 1000) on the Llŷn Peninsula in the Welsh county of Gwynedd after a 2 1/2 hour journey – a worthwhile trip. You can see where it is on the map below. 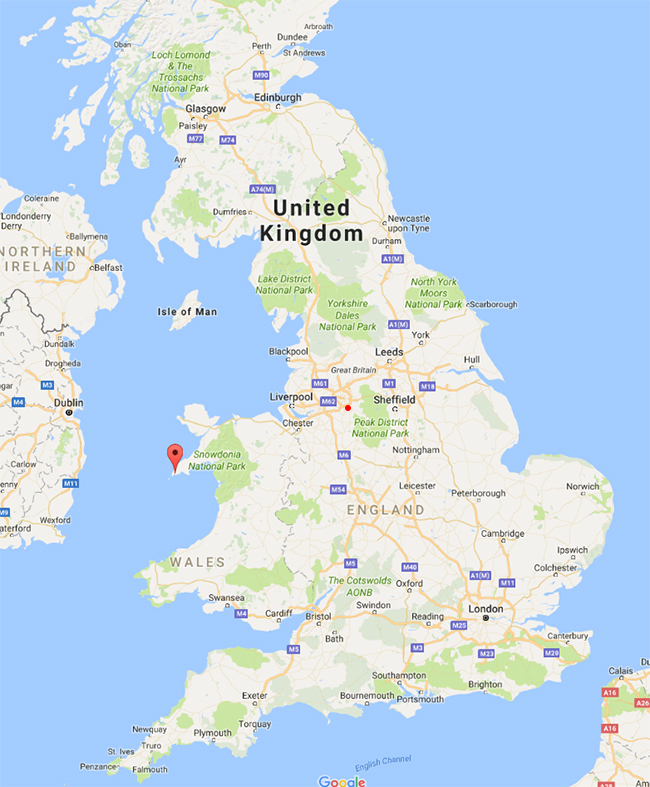 We stayed at a tiny dog-friendly cottage called Pen Y Bont – and while it was perfectly clean and pleasant, it won’t win any design awards so I didn’t take pics of the inside! However, we didn’t go for the cottage itself, we chose it for its picturesque location. 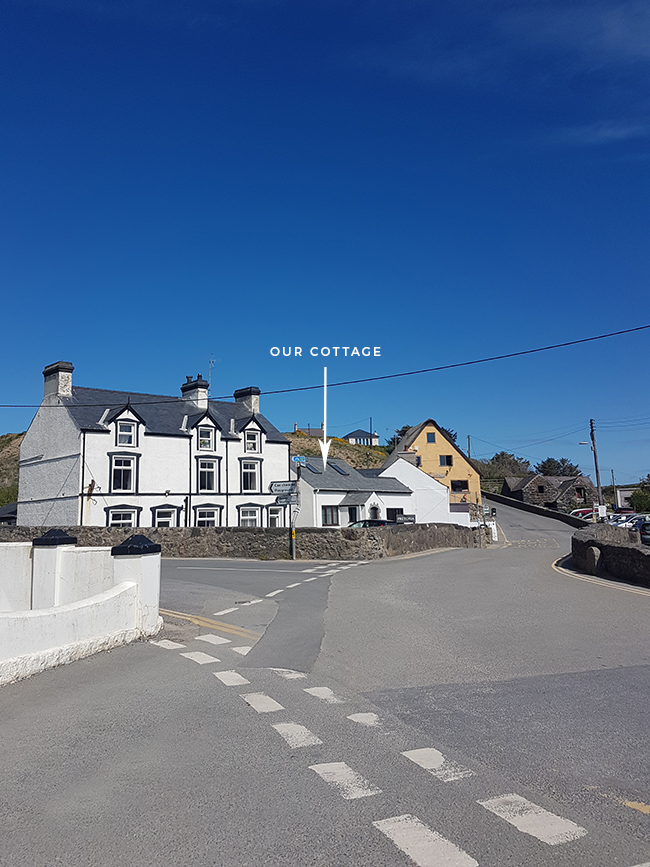 And the location was perfect – only a minute’s walk from the beach and the little village is right on your doorstep where there are a few little cafes, restaurants and a bakery. Pretty much everything you need within a few steps across an old stone bridge. 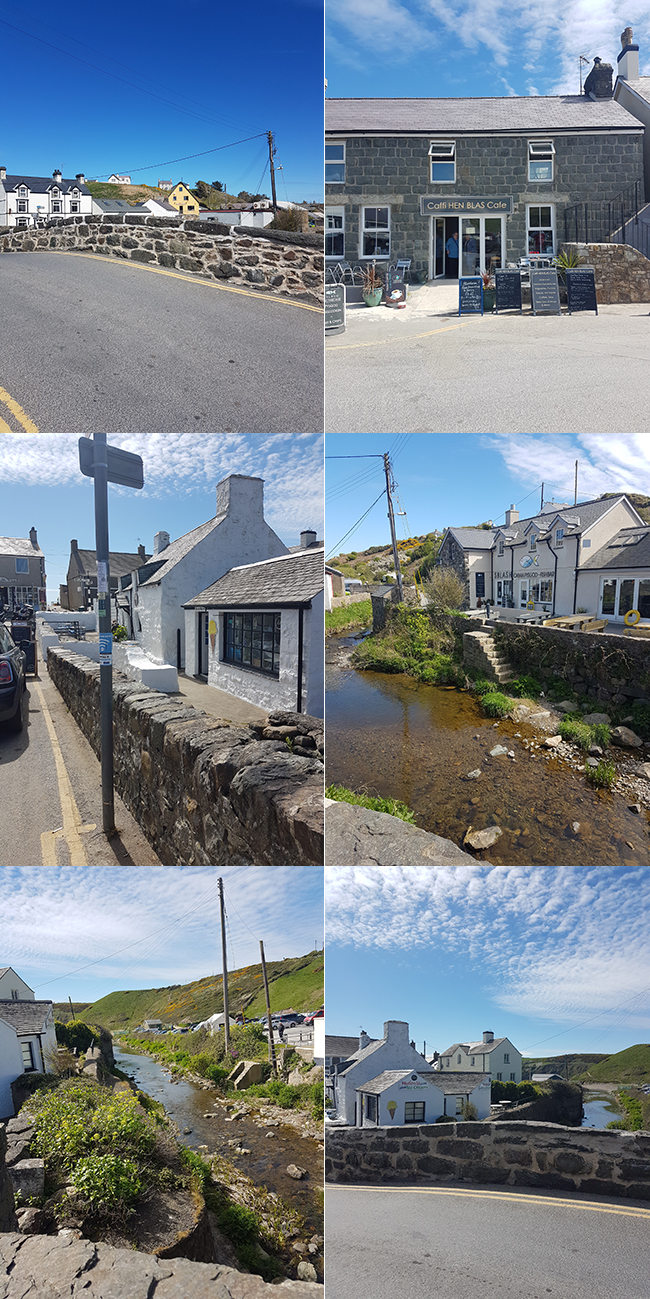 Now, we were lucky enough to have landed on a few days of incredibly lovely sunny weather. There isn’t a whole lot to do in these kinds of areas aside from exploring all the nature around you so if it’s sunny and warm, you can really take advantage. 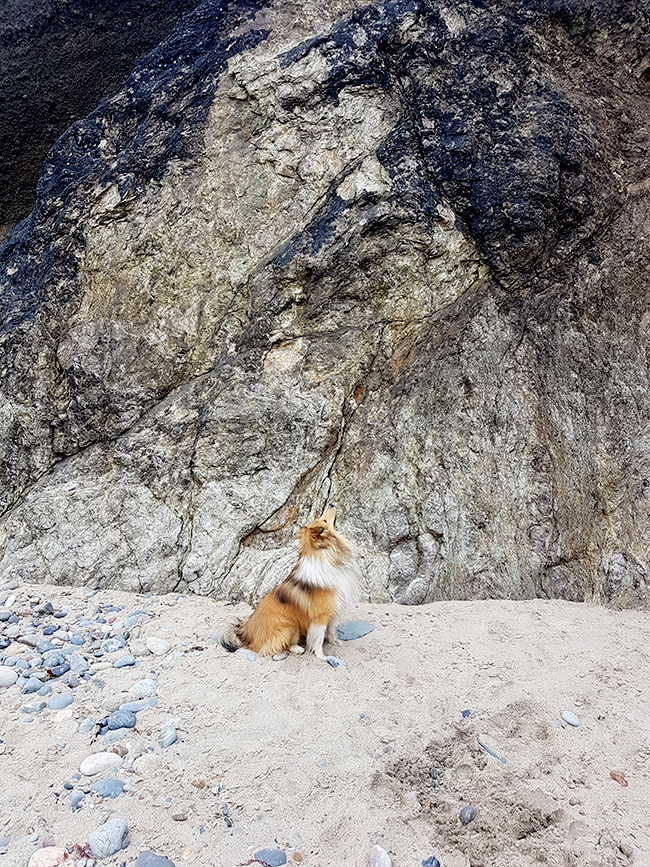 We spent a lot of time on the beach, letting Quito off his lead for him to run around and enjoy. 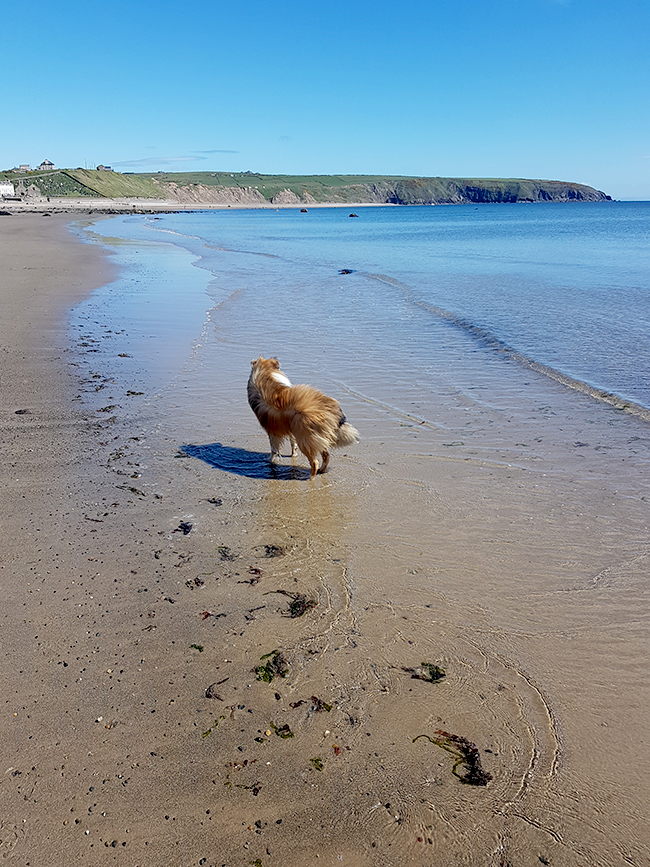 On Saturday, we took a little hike up through the nature reserves there high above the beach. 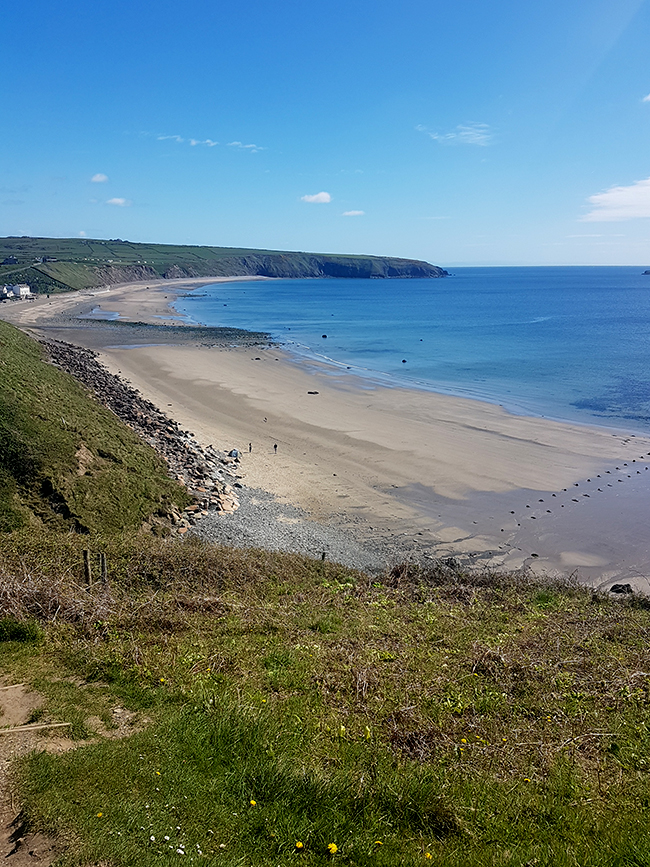 The path winds around the cliffside with amazing views of the sea below. The water was so clear and blue! 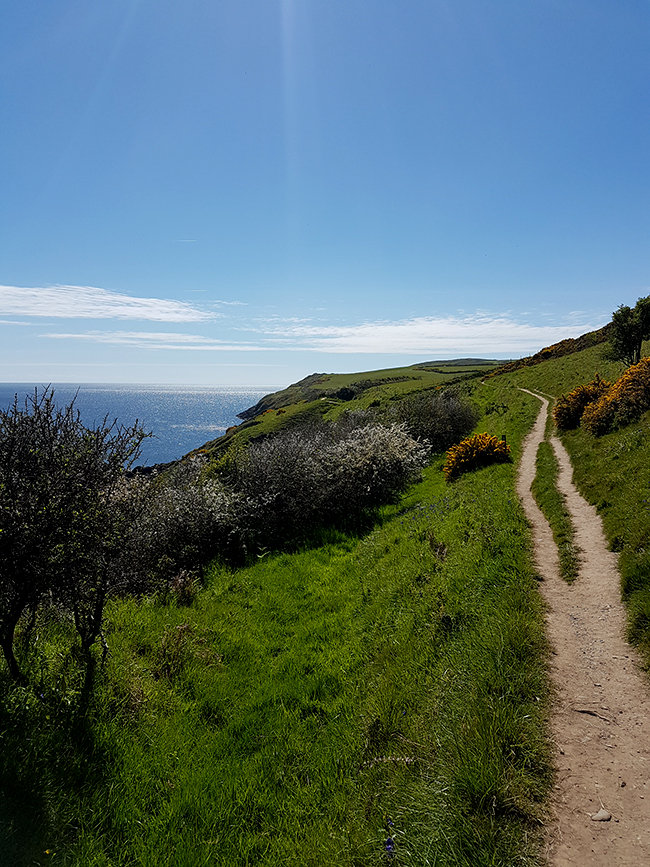 We made our way around and back down the steep stone stairs to Porth Meudwy, a little fishing bay. 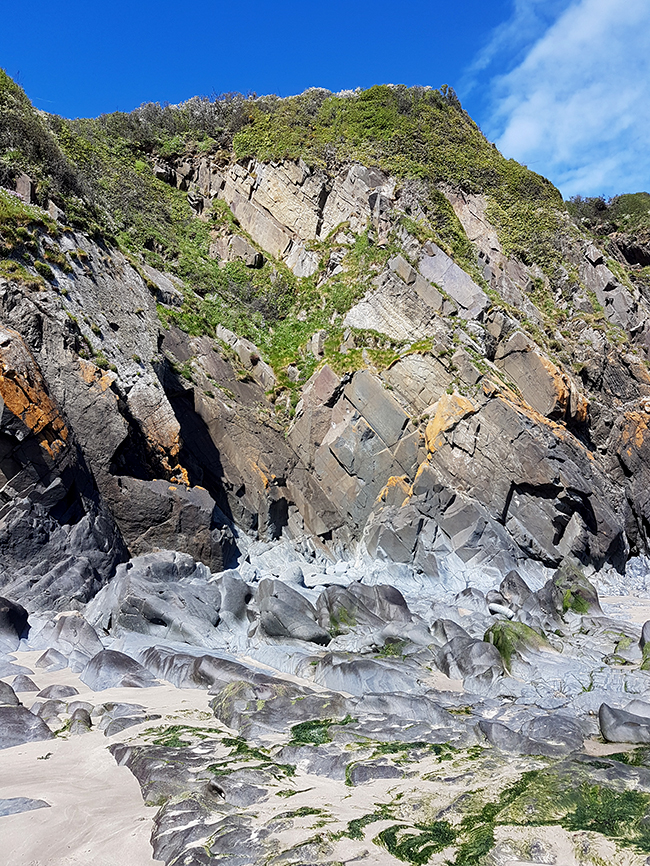 The rocks there had little shells stuck to it – I don’t think I have ever seen anything like it before but it was rather beautiful. Apparently, they are called limpets and are pretty common along the west coast – learn something new every day, eh? 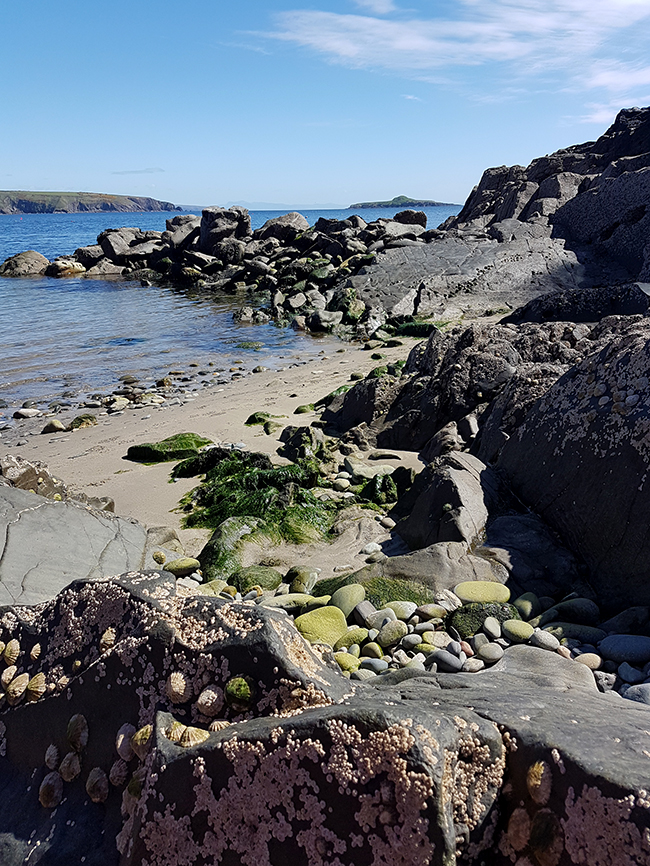 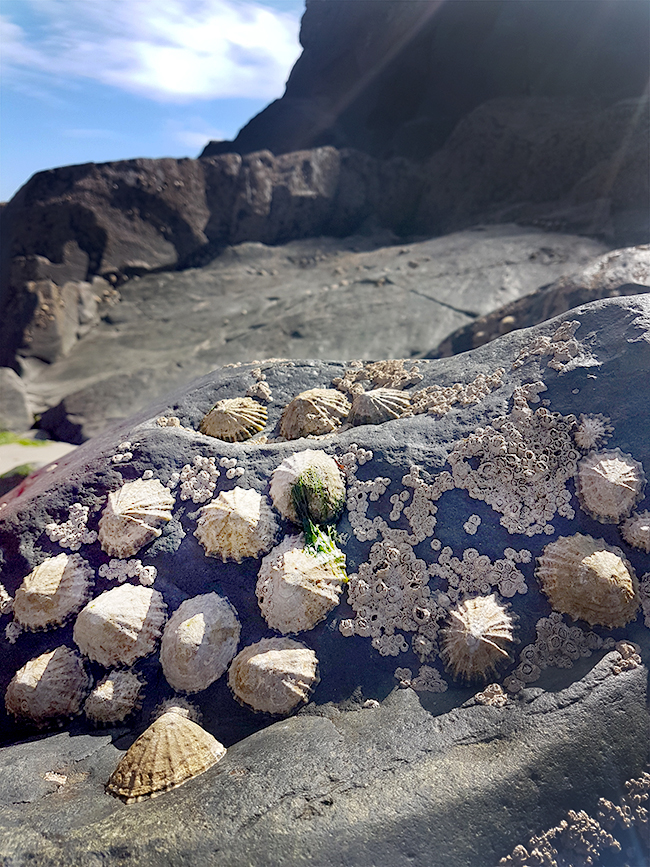 The water and the sky were the richest shade of blue – all these pictures were taken with my phone and no filters are required! 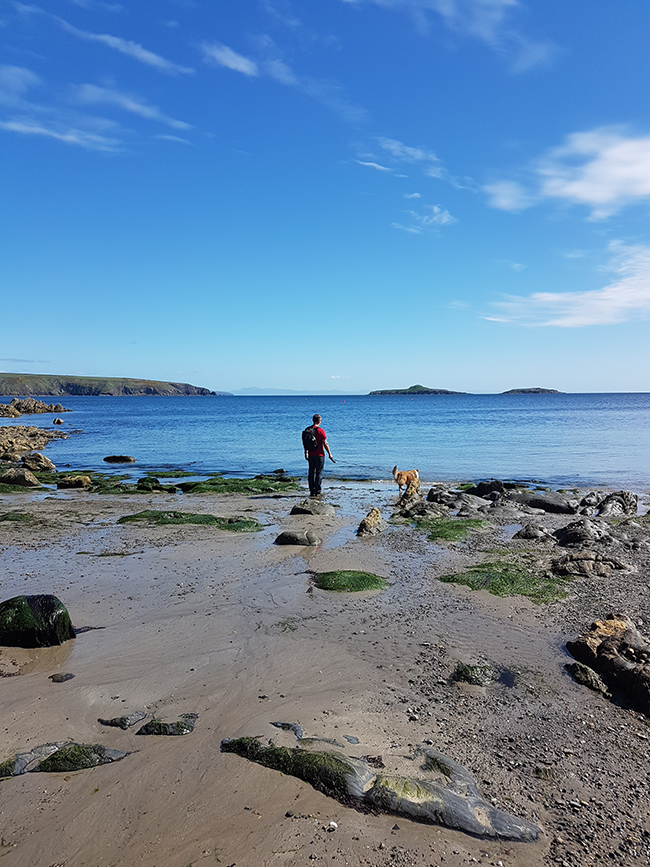 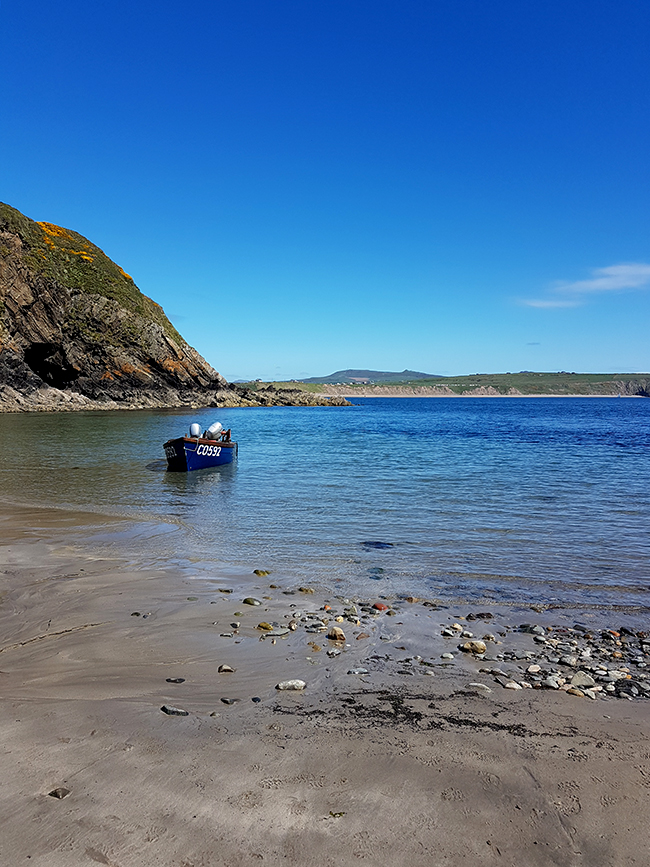 The Gwesty Ty Newydd is a hotel right on the beach with a dog-friendly balcony bar that overlooks the beach. It was the perfect spot for a few drinks in the sunshine after our walks. The whole village is rather dog-friendly which made it a perfect getaway for us with Quito. We didn’t really need to worry about him too much and kept him on his lead in the village itself of course, but once on the beach where it was quiet, we knew he would be fine to have a play in the water. 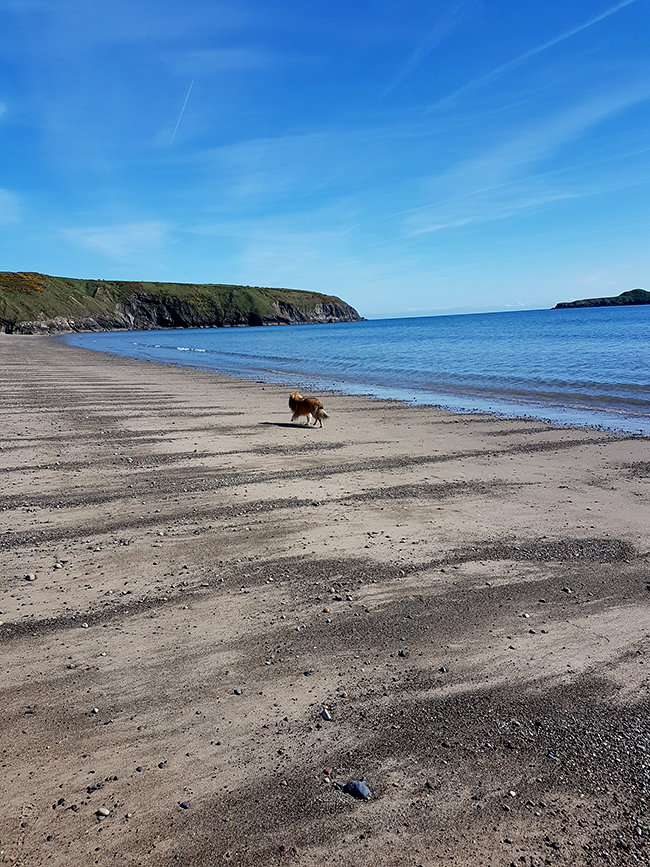 On Sunday, we spent a little time in Abersoch, another village along the coast which is more densely populated and more popular as a tourist destination. The town itself was quaint as well, with a few more trendy establishments and the beach was busier. We relaxed a bit on the sand, letting the sun warm us and letting Quito play with other dogs on the dog-friendly part of the beach there. 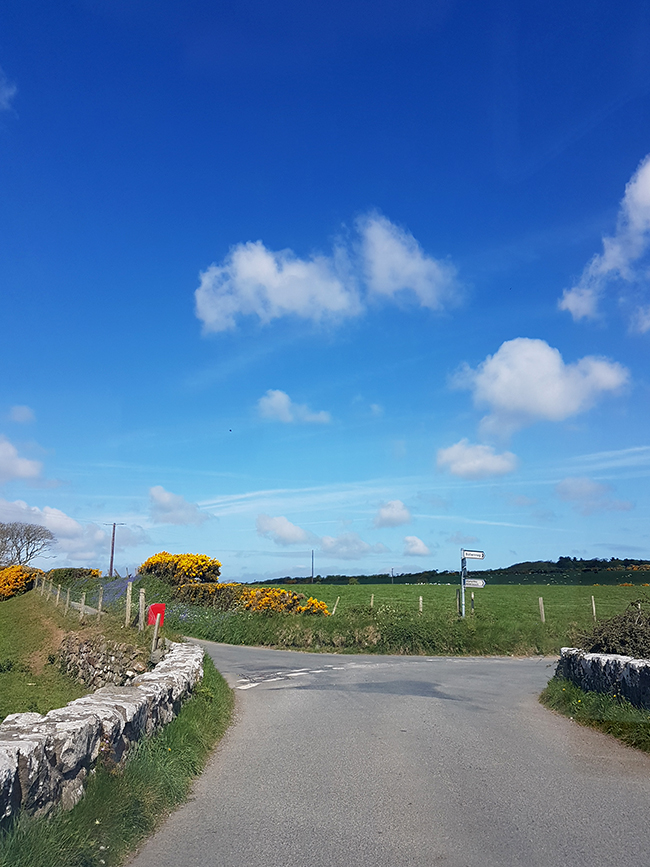 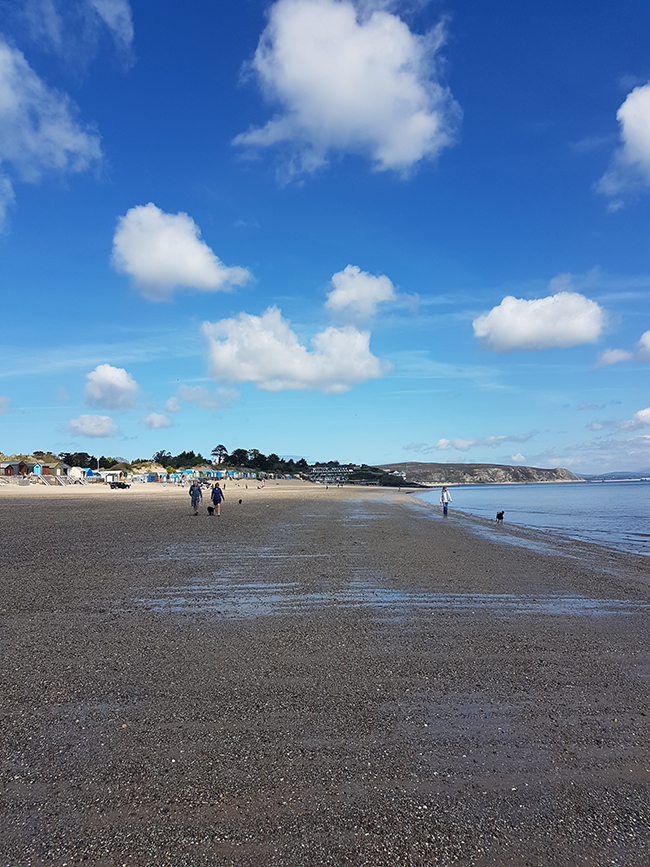 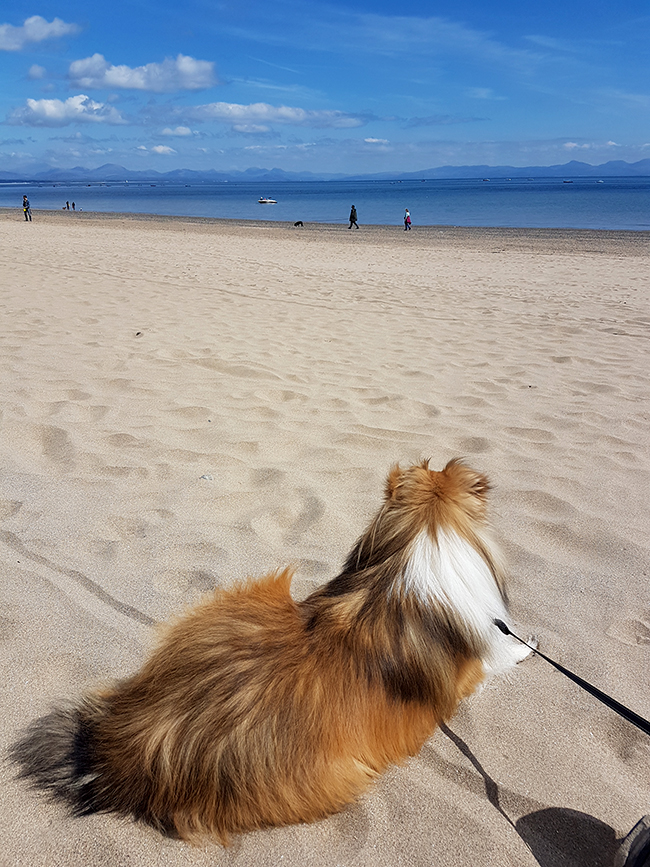 I actually rather enjoyed Aberdaron more, however – it’s a little less touristy, a little more remote and quiet and it was exactly what we wanted. I didn’t have a phone signal the entire time we were there but luckily, most places had free Wi-fi and the cottage did as well so while I wasn’t completely ‘unplugged’, it did mean I was checking my phone a whole lot less! 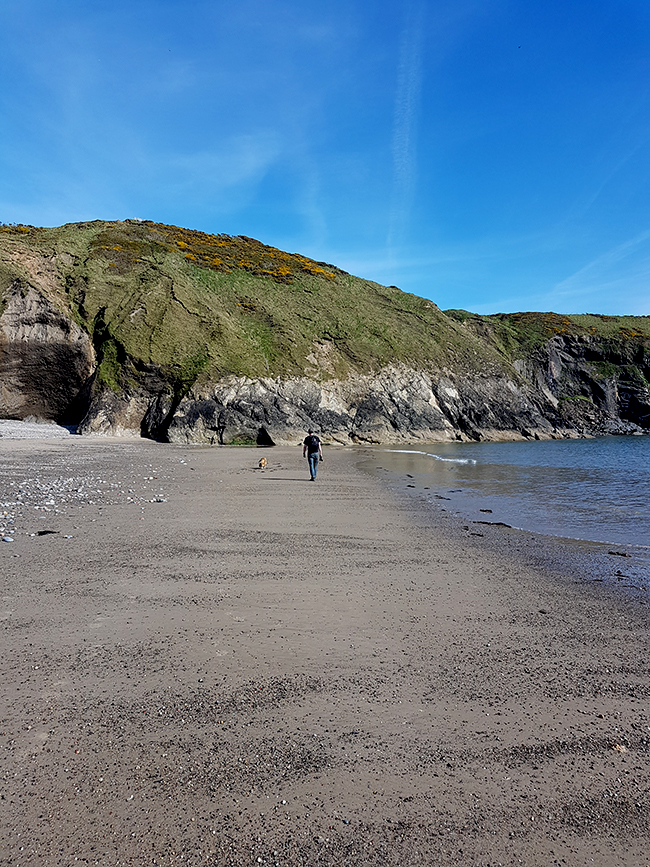 The other thing that rather surprised me – and I do want to apologise to any Welsh readers for my total ignorance as a tourist – is how much the Welsh language is spoken. I didn’t hear anyone speaking to each other in English aside from when they spoke to English tourists. The young people there, the staff, the shopkeepers, etc. all spoke in their mother tongue which I found delightful. I don’t know why but I guess I assumed that English would be spoken as a first language with the Welsh language only spoken by perhaps an older generation. It’s such an ignorant thing to assume, I realise (I’m a little embarrassed to admit that!) and I was so pleasantly surprised to find out just how wrong that thinking was.

The Welsh are clearly a proud people and hearing them speak to each other in a language that I know is near and dear to their heritage and one that they clearly intend to keep was really heartening in a world which is growing ever more homogenised. I truly felt like I was in another country – I mean, that’s a ridiculous thing to say – of course, I was in another country! But you don’t really get that in Northern Ireland or Scotland where Gaelic languages were once common. So it was just kind of cool. 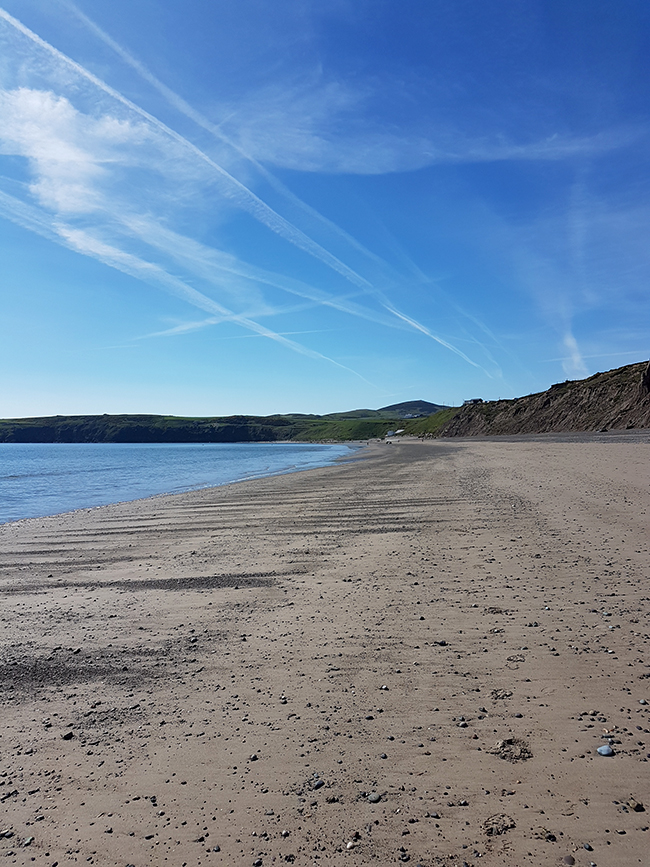 So if you are looking for a little getaway to somewhere quiet and unspoilt and one which allows you to get close to nature, then I’d highly recommend Aberdaron. Just be sure to book during a sunny spell – and bring your dog if you can! There’s nothing more joyous than watching a dog on a beach!

Have you been to this part of Wales before? I’d love to know if you loved it as much as we did!