I know I’m well overdue for an update on the kitchen and I can’t tell you how many people have asked when the reveal will be! I know, I’m impatient too. Wayne has been working on the cupboard doors and upstands in fits and starts simply due to the fact he has to take them into his work to do them (he’s a car sprayer by trade) and he’s been really busy at work so he had to work late to get them completed. By the time the weekend rolled around, the last thing he wanted to do was continue doing kitchen stuff so given that I kind of ‘owe’ him for this one, I didn’t really want to press the issue! So it’s been slow going over the last few weeks.

However, he finished off the last of the work recently so I can finally share the kitchen cupboard doors with you. 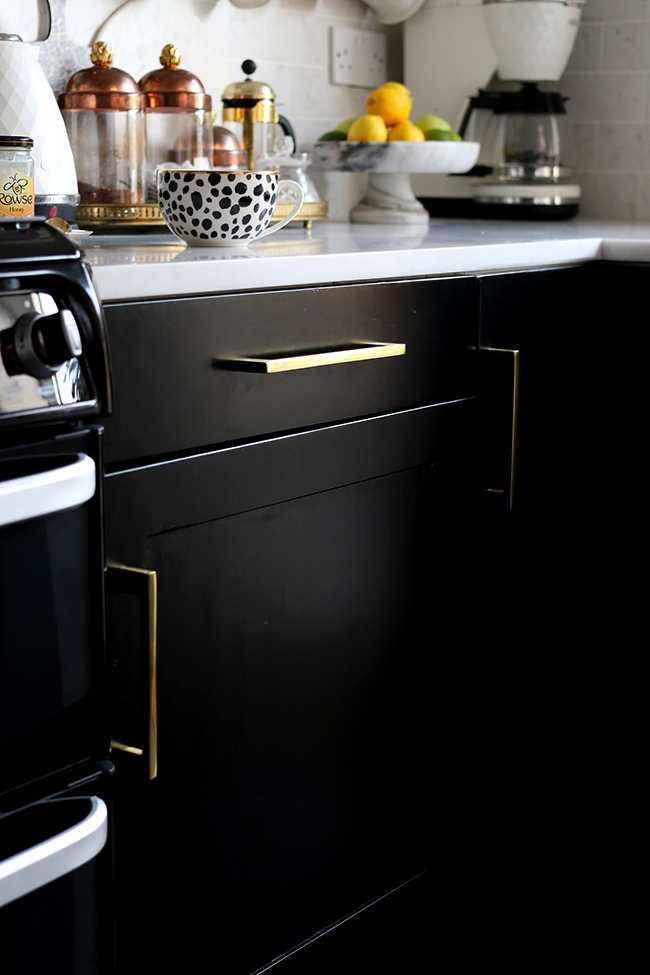 Now, I know a few people wanted to know what our process was and to be honest, I thought this would be a fairly straight forward job. Let me tell you, it’s never straight forward. I’d been graciously supplied with a number of cans of Painter’s Touch spray paint and primer from Rustoleum which was what we’d intended on using for the doors because it’s seriously fantastic spray paint (I’m not just saying that, I’ve used it a number of times including on my desk makeover and it goes on like a dream). Alas, it wasn’t to be. Let me explain. 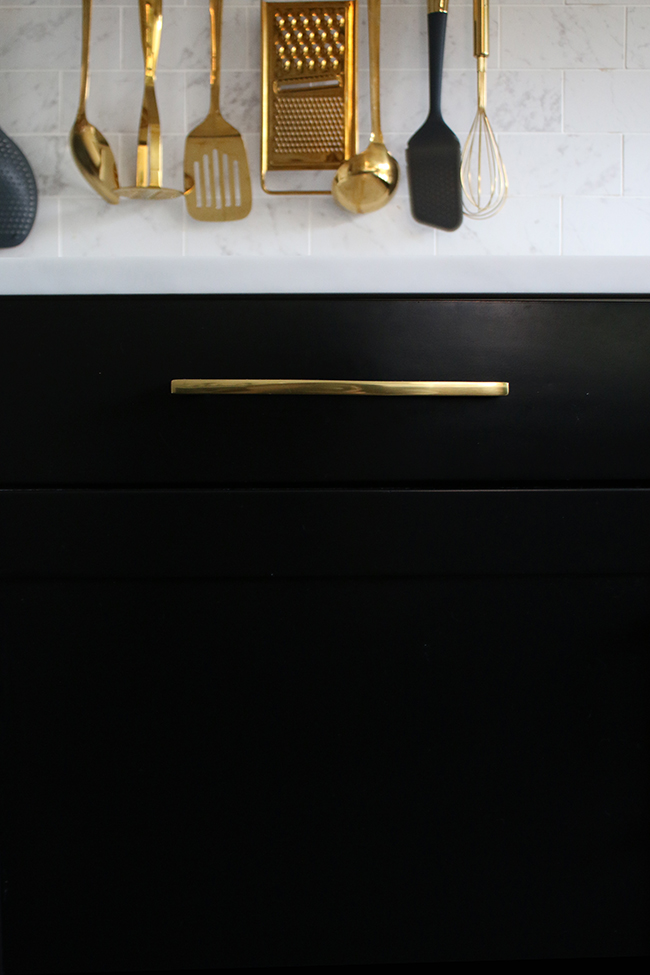 The doors had originally been painted using the kind of paint Wayne sprays cars with. The finish you get on them is exceptional but it’s different to your standard paint obviously (otherwise, our cars wouldn’t be so resistant to the elements). The second factor was that when we’d originally painted the doors, we didn’t fill in the grain on the wood. This left weird streaky marks on the doors where the paint sunk into the grain and while you couldn’t really see it in pictures, you could see it in real life. I hated those streaky marks for YEARS and knew when we did them again, we’d have to fill them. 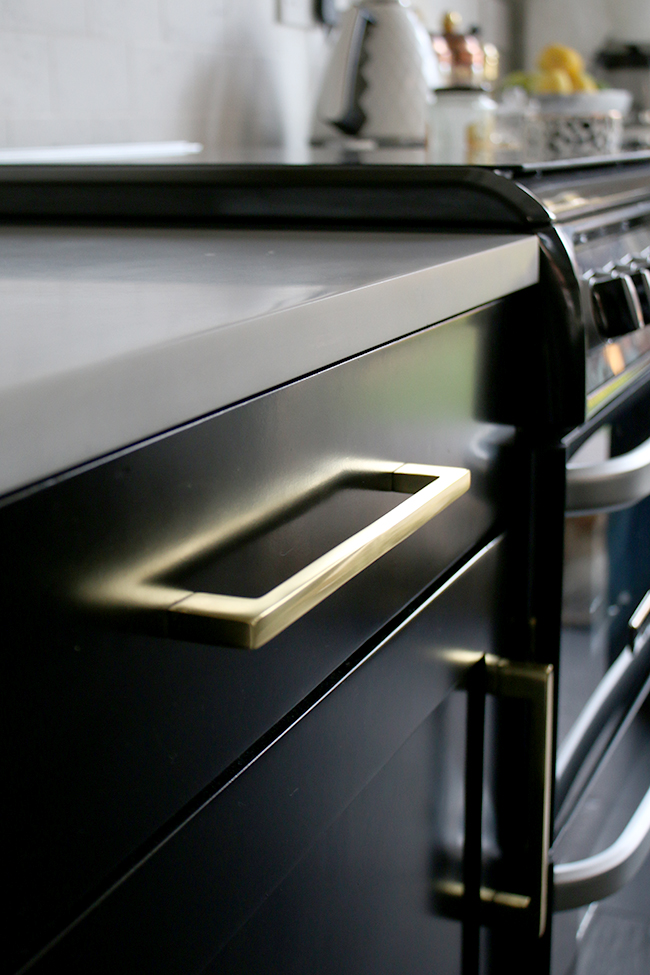 Finding a filler wasn’t easy – we went through a number of different products to get the best result and they had to be done by hand obviously. This made the entire process so much longer. The other problem was that the combination of the original car paint along with the primer and filler created some very strange chemical reactions when Wayne started to paint them. He was having problem after problem with the paint simply not adhering consistently and tried a number of different combinations of paint, filler and swapping his process to get a good finish on these, stripping back a couple of the initial doors as many as four different times until he landed on the right combination of products and fillers as well as another car paint that would all work in combination with each other. 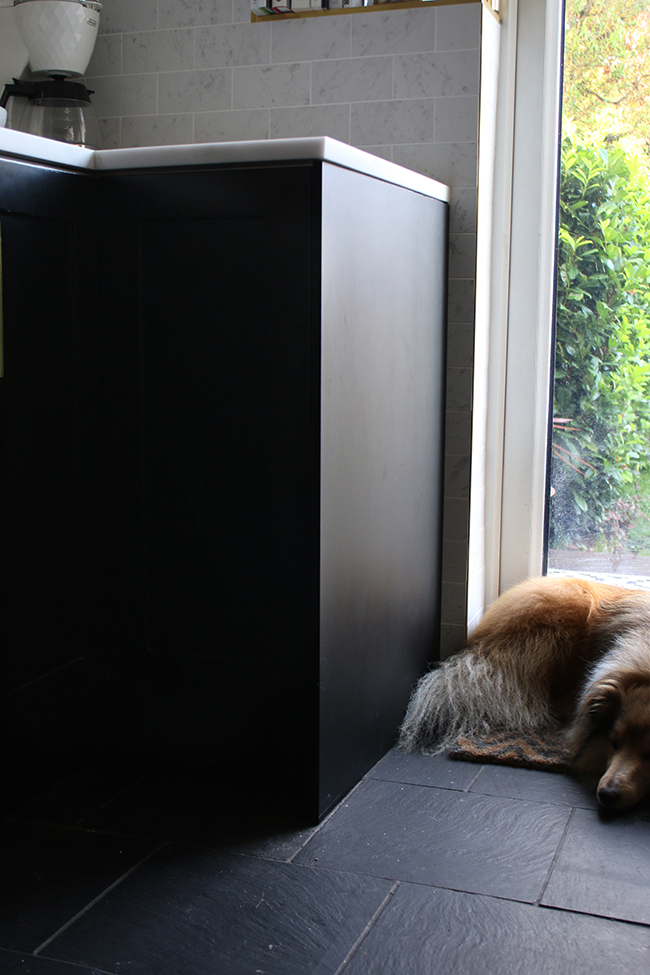 Now you understand why it took us so long. There’s probably absolutely no point in me going through what we landed on in terms of the process as this was so specific to the kind of doors we had, the original car paint finish and the chemical reactions between the different products. So for those of you who were hoping for a quick answer to painting your cupboards, I’m so sorry that I can’t give you this. 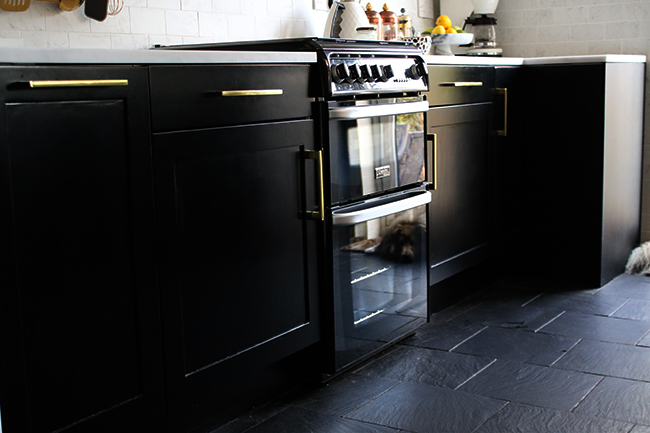 We did end up using the Rustoleum Painter’s Touch Spray Paint in Matt Black on the upstands however (made out of MDF) which gave the whole kitchen a more seamless look as they sort of disappear now beneath the cupboards which is exactly what I wanted. So if you have unpainted doors or MDF, then using this spray paint with a primer is a great idea. It’s only because of the way our doors were originally finished that it wasn’t possible to use and I really want to stress that as it’s kind of an unusual situation! 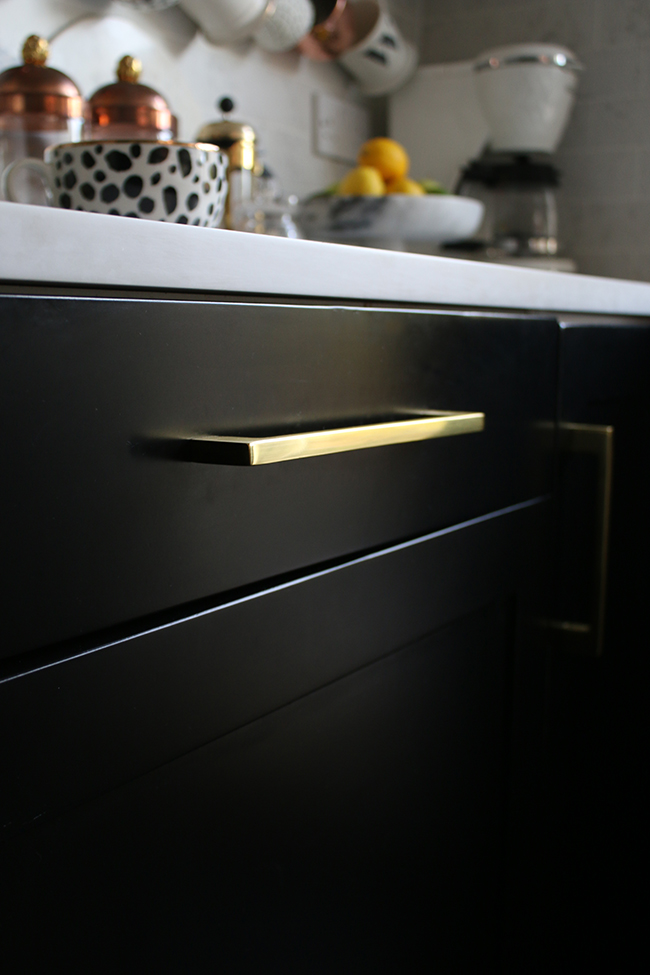 All that said and for all the time it took, I’m so pleased with how they came out. I’ve got a smooth satin finish that is pretty much impervious to everything and it provides a beautiful contrast to the marble effect worktop and tiles. 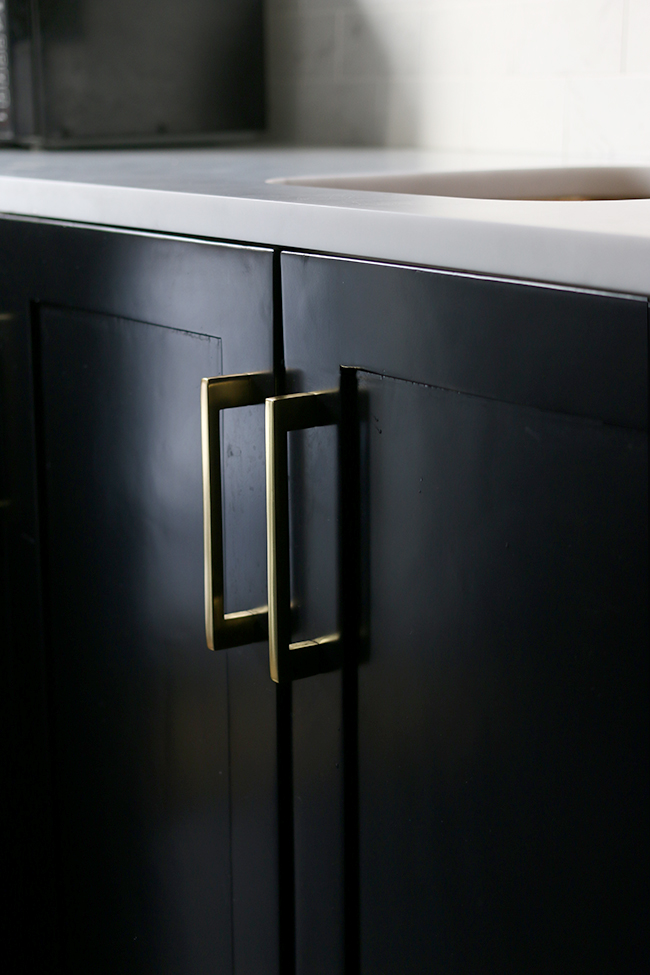 I also got some fab new appliances from AO.com in black which blend right into the cupboards after I realised the white ones just stuck out like a sore thumb! More on those later! Oh and for those wondering, the brass pull handles are by Heritage Brass. I’ll be sharing all of my sources once I do the reveal so hang tight if there is anything else you want to know the sources for! 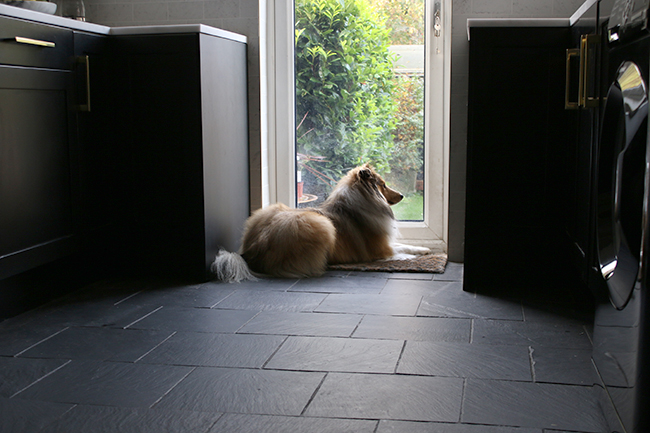 Obviously I don’t want to ruin the reveal by showing you the whole kitchen at this point so these pictures are a little more cropped in. We will be painting the kitchen next weekend and if I get the chance, I’ll wallpaper behind the cupboards as well and then the whole thing will be complete and I can finally share it with you in it’s entirety!

Whew! So I hope you like the black cupboards! It’s such a massive change to have them after having the white cupboards for so long but I’m pretty in love with the final result. Once I share the full kitchen reveal, you’ll be able to see that the kitchen is still a lovely bright space to be in despite the dark flooring and dark cabinets – I promise! ;)

So what do you think of the final result? Any kitchen cupboard finishing nightmares of your own? I’d love to hear from you!

Disclaimer: While I wasn’t able to use the Rustoleum spray paint on the doors, we did use it on the upstands and it was provided for free in exchange for my honest review. Despite the fact it didn’t work for this particular project due to the complications of the original paint finish, I would gladly recommend their products which I love. I only work with companies I really like and think you will too! Thanks so much for supporting the businesses that support Swoon Worthy!