I know that there is no such thing as a ‘glamorous’ bread bin. I know this because I tried to find one and failed miserably. Perhaps bread isn’t sexy enough to warrant fabulous storage – it has very rustic roots in tradition and craft. It’s not the kind of thing one thinks of when they are considering the ultra fabulous. Perhaps I’m wrong and they are out there but Google was no help and looking at a whole host of different online retailers in the UK proved fruitless. Or maybe breadless in this case. 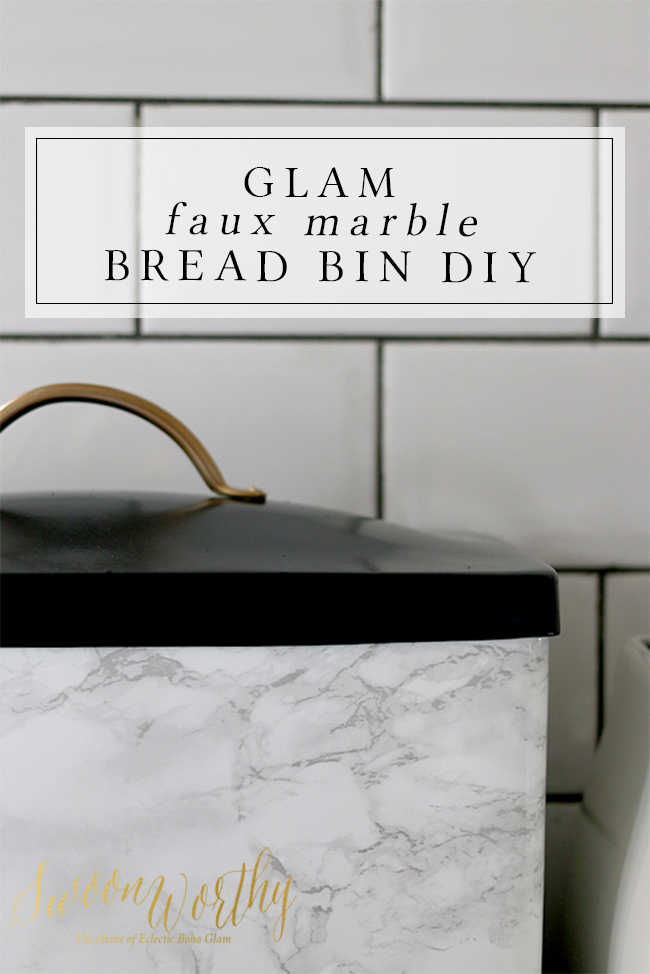 The funny thing is, I don’t even eat bread.* I don’t know if I have a gluten intolerance (it’s possible because since I’ve gone Paleo, I have had it a couple of times and it’s just made me feel sick the rest of the day) but Wayne still eats it on our house and the bread bin is where I store all my ‘healthy’ snacks like nuts and raisins and occasional, those little date bars that Nakkd make. So the bread bin is still a necessity in our home.

*Although I might give a hot cross bun a go this weekend. It is Easter weekend after all. I’m not a total bore.

Here’s the sad before… as you can see it was a little rusty and tired. It’s not horrible or anything but it’s just not my taste any more. 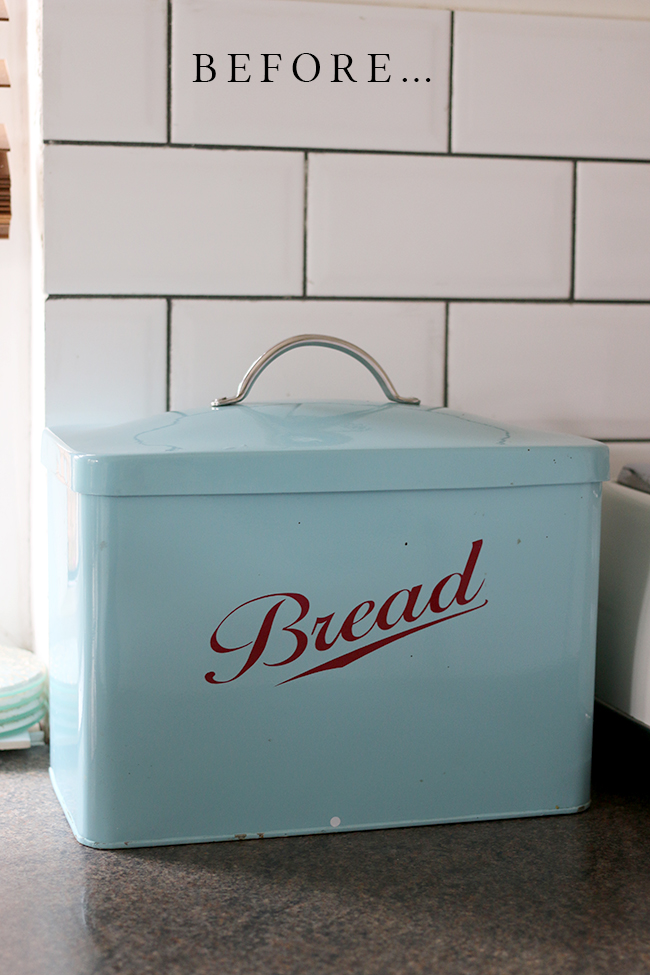 Oh and don’t get me wrong. There are some lovely bins out there (I was marginally tempted by this one) but most of what I could see were very traditional in design or more ‘retro/vintage’ than my tastes or just way too contemporary and spending £40-£60 for something I wasn’t crazy about just seemed a bit silly when I had a perfectly acceptable one at home – at least in terms of practicalities. It’s a great size in that it’s quite tall and fits the area on the wall where it sits nicely alongside my pretty Delonghi toaster. I’ve had it for four years now when I had more of a turquoise and red theme going on in here but since then, tastes change and I’ve gotten tired of looking at one of the last vestiges of my love affair with turquoise. It was kind of like still seeing your ex on Facebook pop up even though you defriended him 2 years ago. After a while, you just think, ‘enough’s enough’.

And I’d gotten to that point due to another purchase. Yes, the Decorating Domino Effect strikes again. So before I get to my DIY, I need to share the whole reason I even did it in the first place:

Because I decided to splurge on these beautiful Ruffoni glass jars. 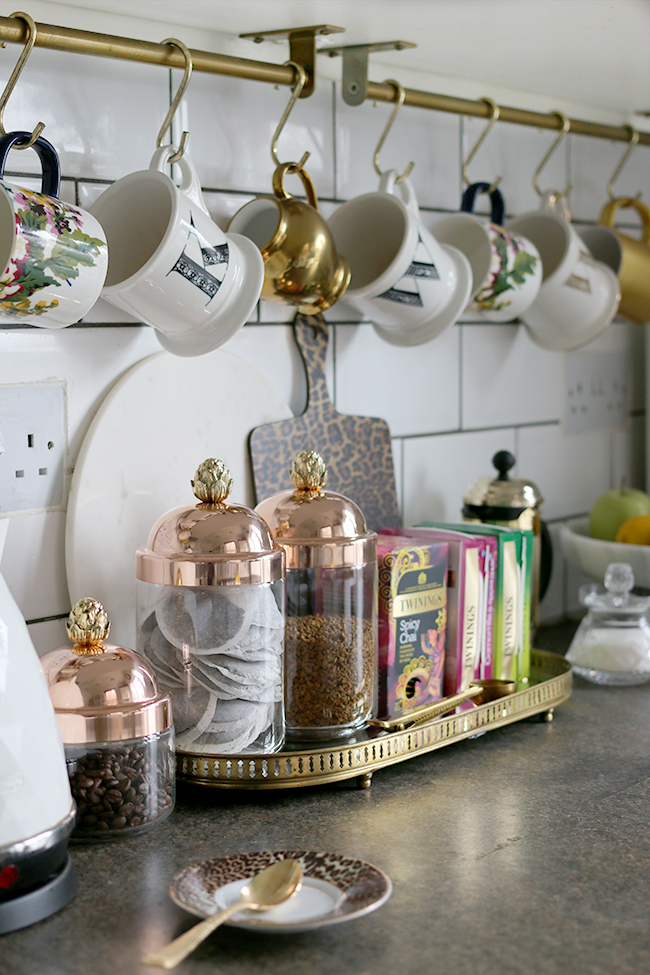 I know, right?! Talk about utterly fabulous storage. But well, they are super pricey. Don’t get me wrong, I realise spending this kind of cash on some storage jars is really nuts. I saw them originally when Michelle from AM Dolce Vita’s posted them on her instagram account. There might have been a sharp intake of breath. There might have been some sweating and dizziness. There may even been some tears. I was either infected by some alien virus or I was in love. 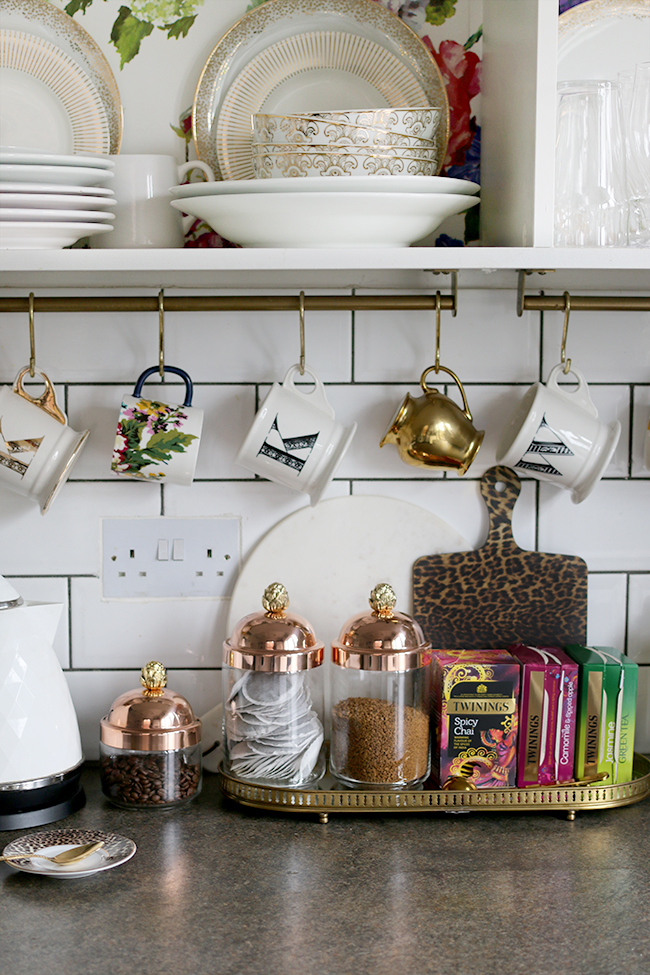 Now here’s the thing about a splurge purchase because that’s what this was for me (for you, this might be chump change or perhaps spending more than £30 is a splurge – only you know what ‘splurge’ means to you. Also, ‘splurge’ is a stupid sounding word for something so beautiful as these jars). You know I am all about getting good deals and DIY (see bread bin makeover down below) and saving the pennies. But there are certain times when a splurge – when you can afford it of course – can be good for the soul and good for a room. I always say you should treat yourself to at least one or two splurge items in a room if you can swing it. It’ll elevate every other thing in the space. However, you should have the same physical and psychological reaction to it that I described above. You have GOT to love it, to desperately want it, to not be able to picture your life without it. Don’t waste the money otherwise.

I duly checked my bank account. Everything for the dining room remodel has been paid for now and I was able to save a few pennies here and there for that one. All my bills were accounted for and everything else in terms of fiscal responsibility were covered. I’ve had a few busy months work-wise and I had the cash. So yeah, this splurge? It had to happen. 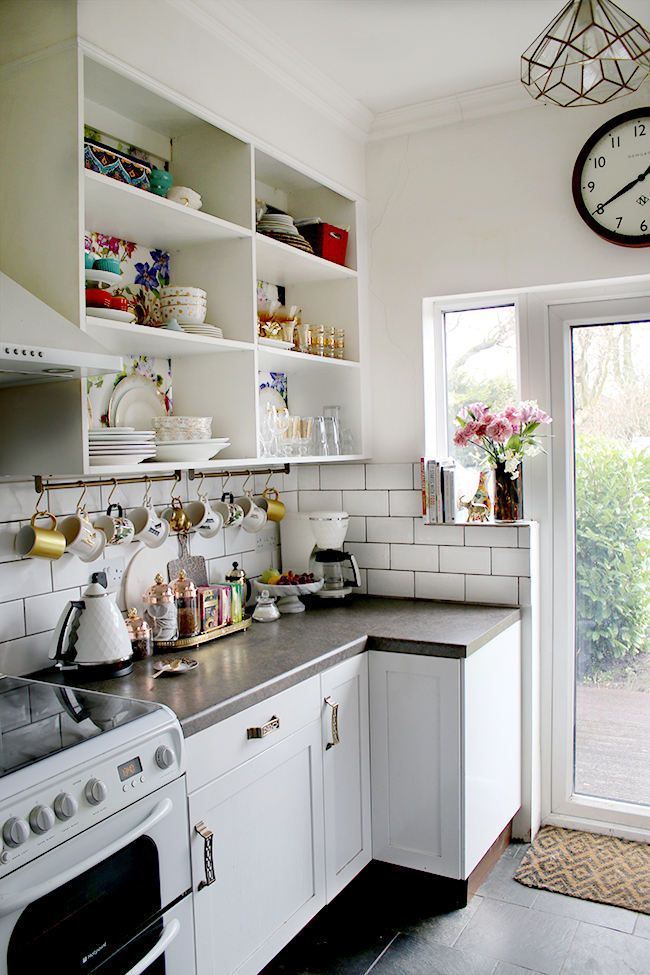 I also decided to change up the tray that was here before (you can see it in this post) – I had a large gold one which I liked but it was always a bit too big and took up too much room and the truth was, we weren’t drinking every single thing off that tray every day. So I pulled out the ones we did use on a daily basis and everything else went into our pantry cupboard out of site. I like that it’s a little clearer here now and those new jars don’t get lost amongst everything else. I may also have gone ahead and ordered a couple of these…. although now I am thinking I need to start drinking posher tea because my Twinings boxes look a little sad and out of place – SEE WHAT I MEAN. Decorating domino effect. 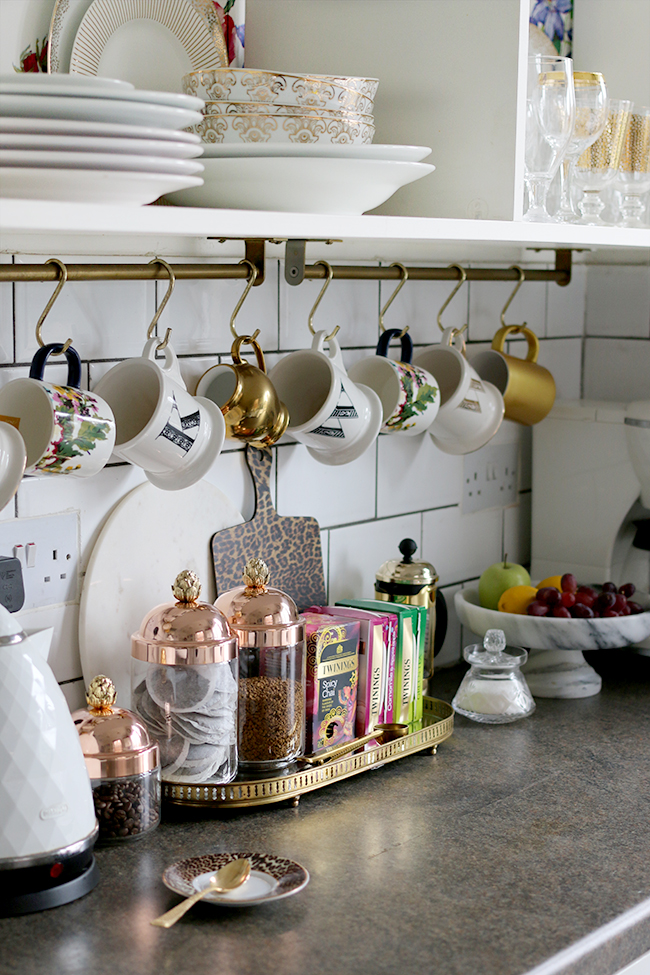 Perhaps I should leave those in the cupboard?? 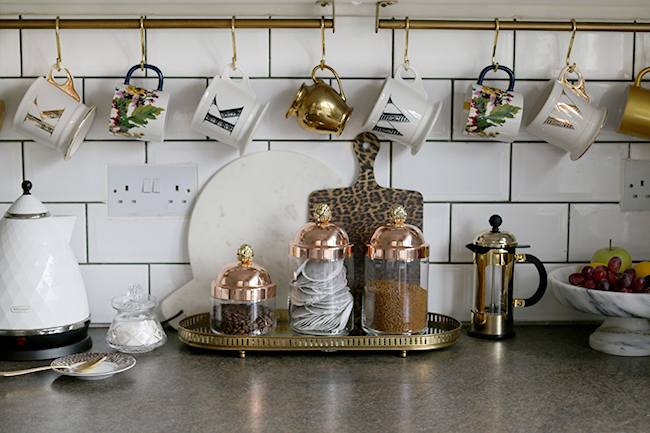 Also, I realise my kitchen worktops are ugly as hell. I can’t wait to replace them!!

Anyway, fretting about non-posh tea aside, it was only once I’d placed my order for the jars, I realised then and there that the bread bin needed a makeover. At first, I was just going to spray paint it white and then I ran out of spray paint half way through the job. Whoops. While I was waiting for it to dry and contemplating a trip to the DIY store (and trust me, I didn’t want to go – I’ve been there half a dozen times in the last 2 weeks, they practically know me by name now and it’s embarrassing), I spied my marble contact paper

*This post contains affiliate links indicated by an asterisk – you don’t pay any more but I’ll get a few pennies to spend on pretty things for the kitchen! Win win! 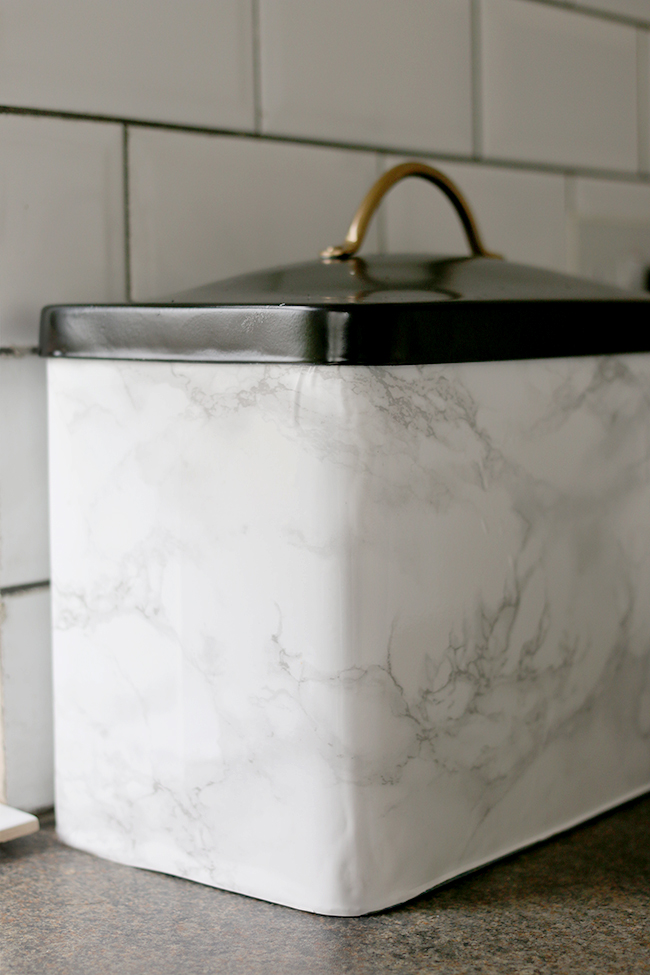 So a DIY was born. I simply wrapped the base in contact paper, smoothing it down with a scraper as I went to get the bubbles out and then spray painted the bin top in black spray paint*

. Of course, the silver handle had to be spray painted gold

* as well. I just used a bit of frogtape*

to mask it all out. It was ridiculously easy and took me about an hour all in. 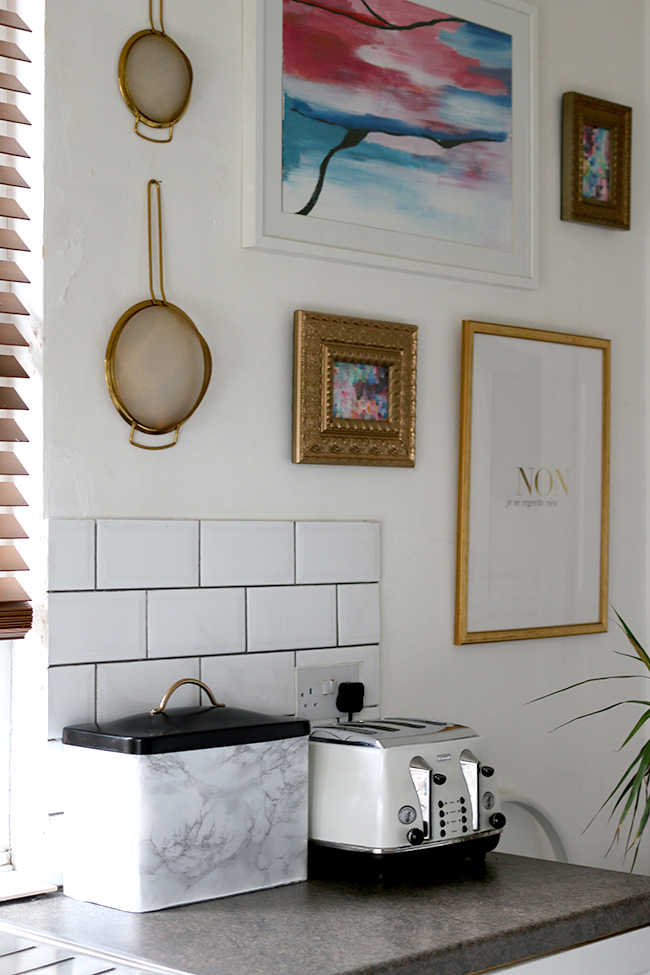 I love the new look. Every time I passed it for the following day, I remarked to Wayne, “I’m so happy about that bread bin.” which is probably the weirdest sentence ever uttered. I wish I had a Cricut machine to make a little ‘Bread’ decal in gold foil for it to finish it off but well, I don’t. Maybe I’ll order one from Etsy if I get around to it.

Now obviously the kitchen has a long way to go before I’m actually happy with it. I’ve chosen my tiles, I am waiting for a few samples for the countertops to come in and I’ve decided on the colour of the cupboards. Once we are finished with the dining room (allowing a little breather from the chaos of course), we’ll start on this project.

But these pretty glam additions can hold me over for a little while longer.

So…. while I realise you must be thinking I have stock in the marble sticky back plastic industry (I don’t), what do you think of this quick and easy DIY? Would you ever spend a ridiculous sum on storage jars? Talk to me.