If you’ve come here today hoping for pretty pictures, I’ll just apologise now and tell you there isn’t going to be any. If you want to see what the reality is behind all those pretty pictures, however, welcome to my post! 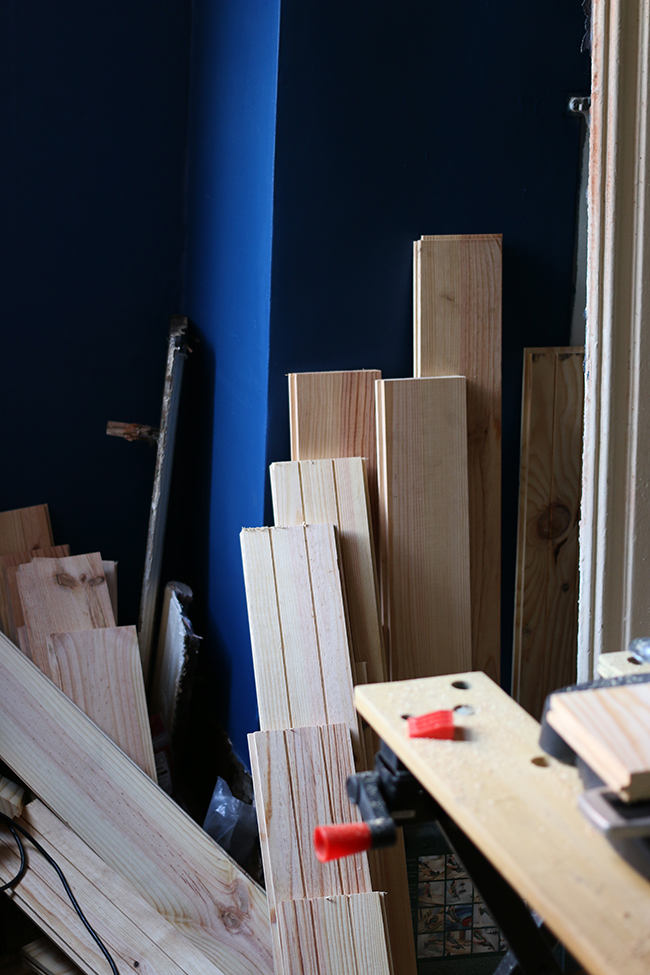 Work started this weekend on the flooring. It was our goal to get all the old floorboards up and install the new pine flooring in two halves over the course of the weekend and then start staining and sealing this week. I’ll apologise firstly that my post is a bit late today but you’ll hopefully understand why shortly.

The weekend started out with Wayne coming home from work feeling a bit under the weather – sore throat mostly but when I suggested holding off with the floors, he said he was fine, we will start and all will go to plan. Saturday morning he felt a bit worse but insisting he was still well enough to continue (you can see where this is going already, can’t you?). 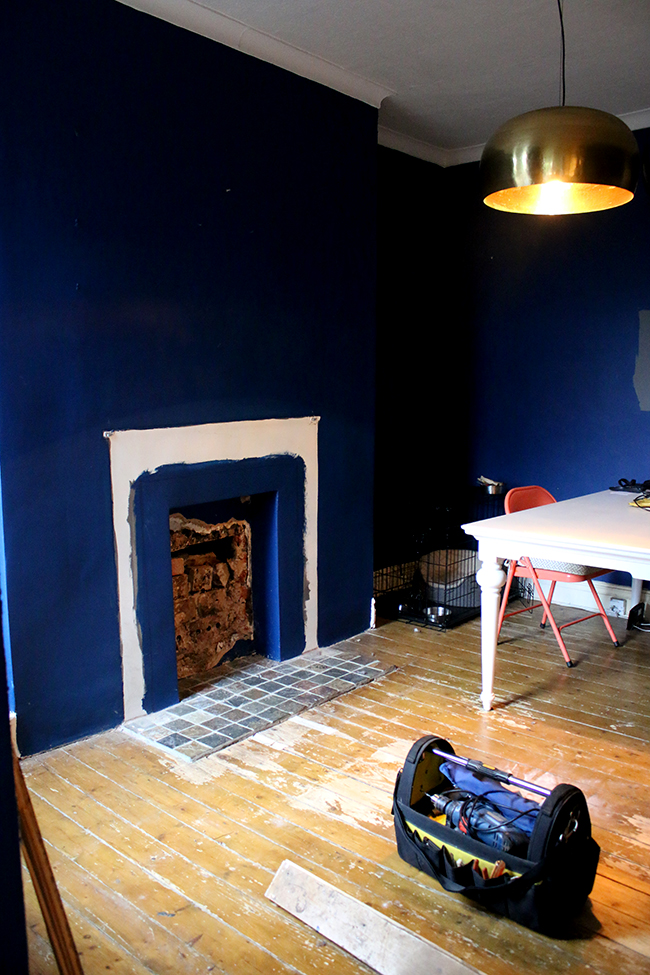 We began by ripping out the old hearth. It wasn’t original by any means and I hated the tiles. It was just ugly, it stuck too far out into the room and I was so incredibly happy to see the back of it. You’ll see as well that we ripped out the back panel, hoping that it was covering a deeper fireplace but alas, it was all bricks! So yeah, that needs to be patched back up (a bit of MDF as it’ll be tiled over anyway, no biggie). 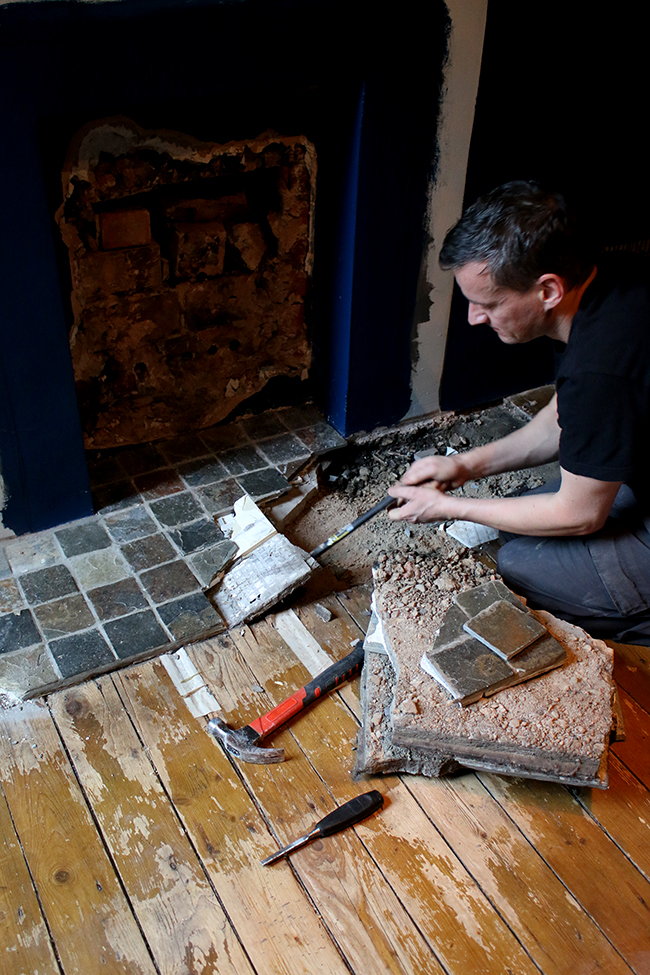 We also removed the skirting boards where we needed to get underneath to the wall and removed all the trim work. Then Wayne started on the floorboards. 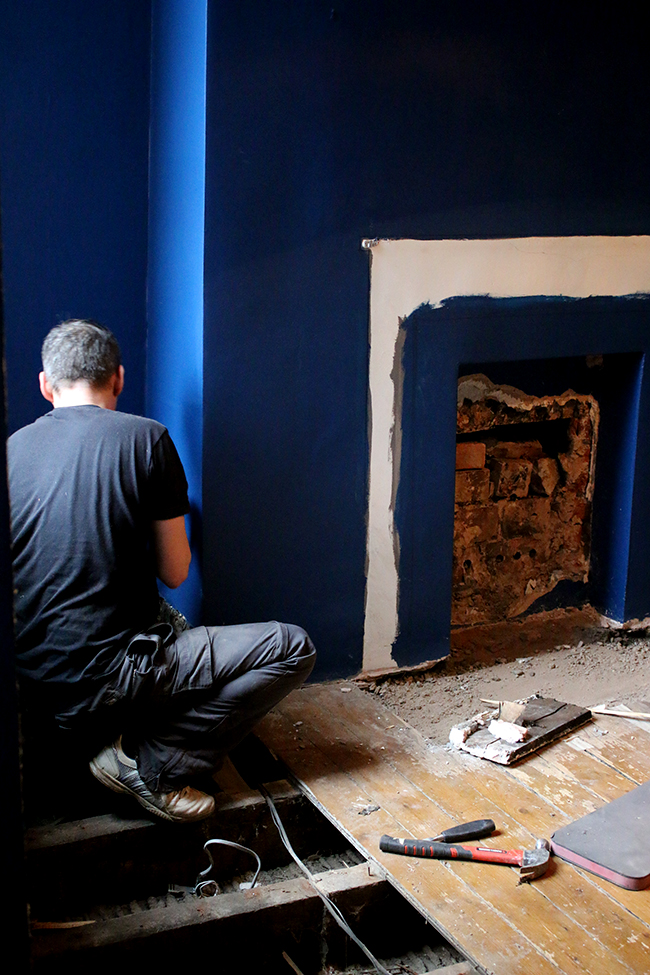 Laying flooring like this is basically just a very long and arduous process of pulling up a few at a time, hand moving each individual board (or what’s left of it) outside, removing all the old nails and cleaning the 100+ years of rubble and dirt laying on the joists, measuring out the new board, cutting it to size, fitting the tongue and groove to the one next to it, using a mallet to bang it into place, making sure it’s in the right spot vertically and hammering it back into the joists. Over and over and over. 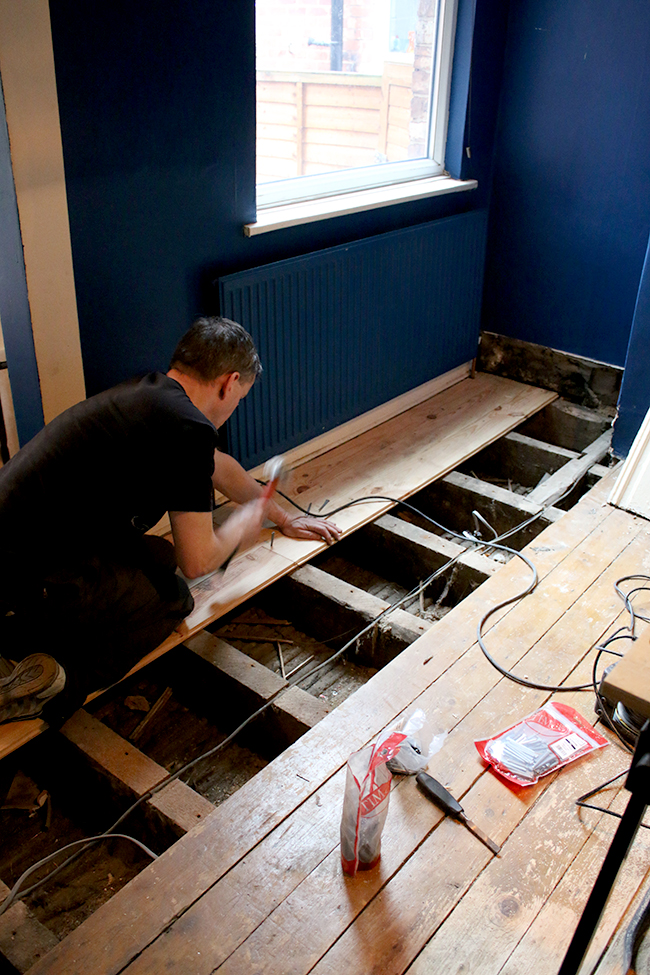 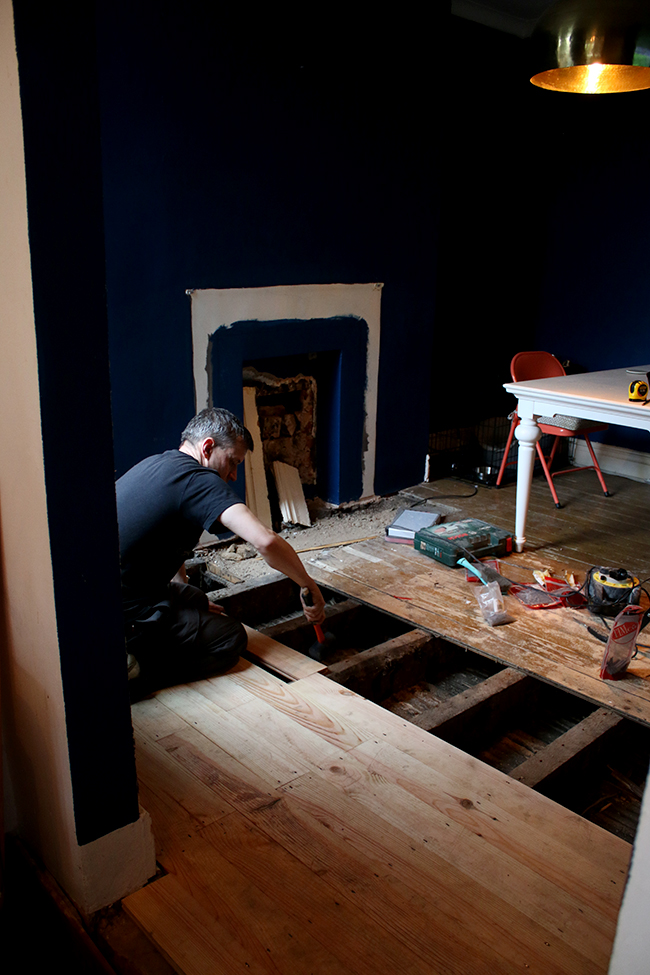 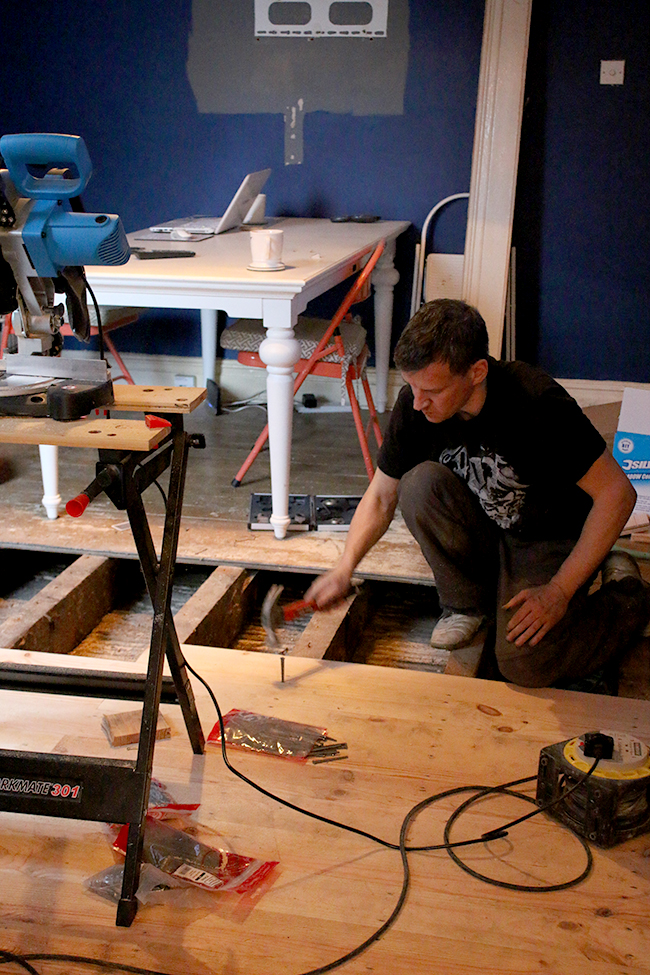 Quito, as you can imagine, was very excited by all the noise and commotion. 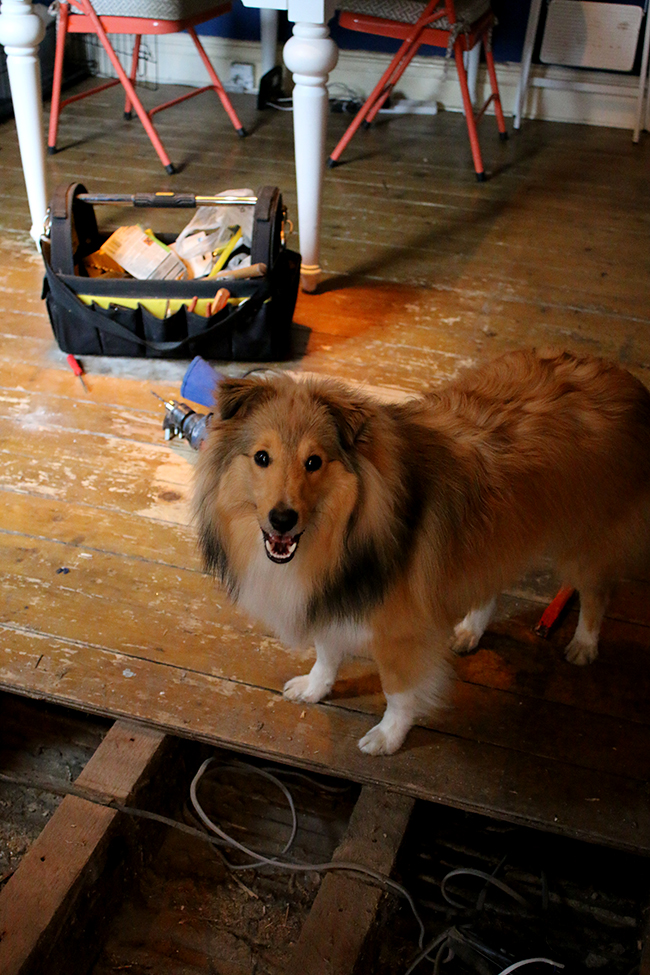 By the end of Saturday after 7 hours of straight work, we’d managed to complete half the flooring as planned. Hurrah!

Wayne was exhausted, however, and his sore throat was even worse. Again, I told him he didn’t have to continue on Sunday if he wasn’t up to it. “No, I’ve started it, we need to get it done.” Okay. No point in arguing with an exhausted man on a mission. I cleaned up best I could (SO MUCH DUST) so that work could start again in the morning.

(This picture was taken the following morning, obviously by the time we finished on Saturday night, it was dark!) 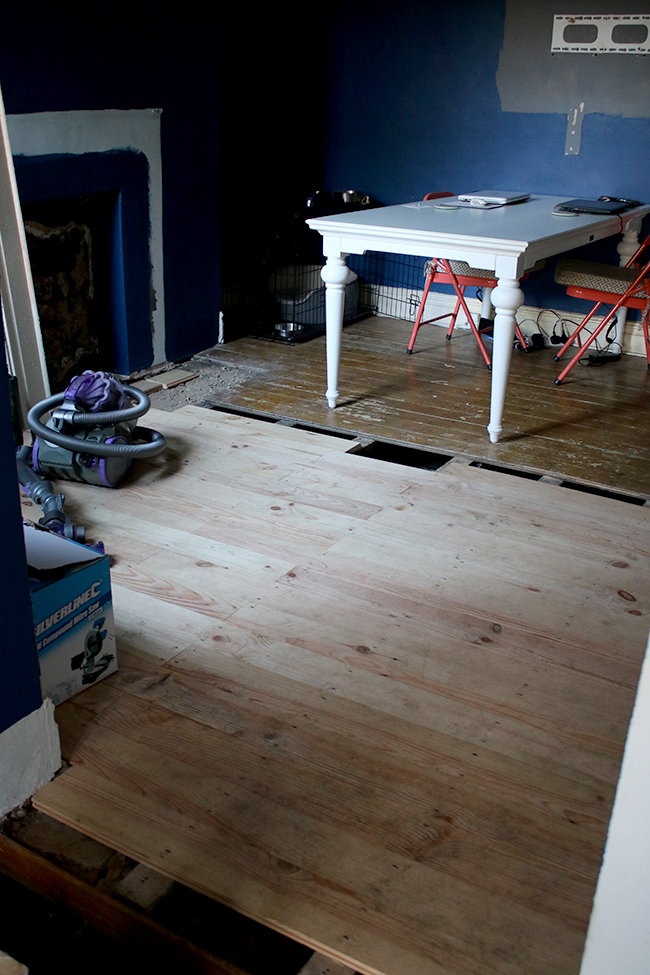 Sunday morning, Wayne woke up feeling bloody awful. His sore throat was at the point he could barely swallow, his voice was gone, he had aches and pains from the day before and hadn’t slept much. 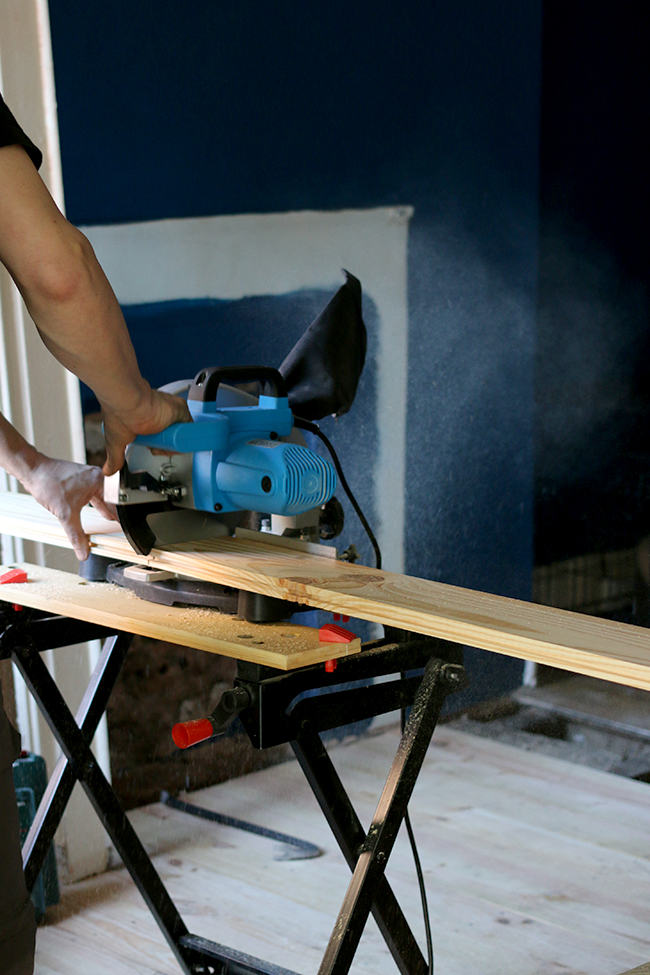 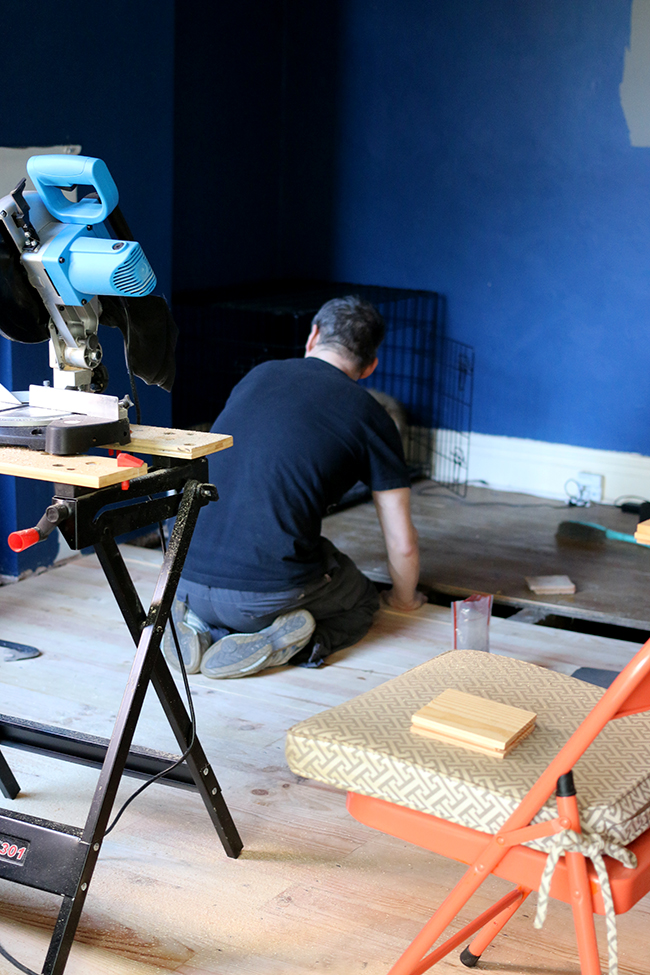 Quito was not as sure about all the noise and commotion the following day and just wanted to sleep. You weren’t the only one, little man! 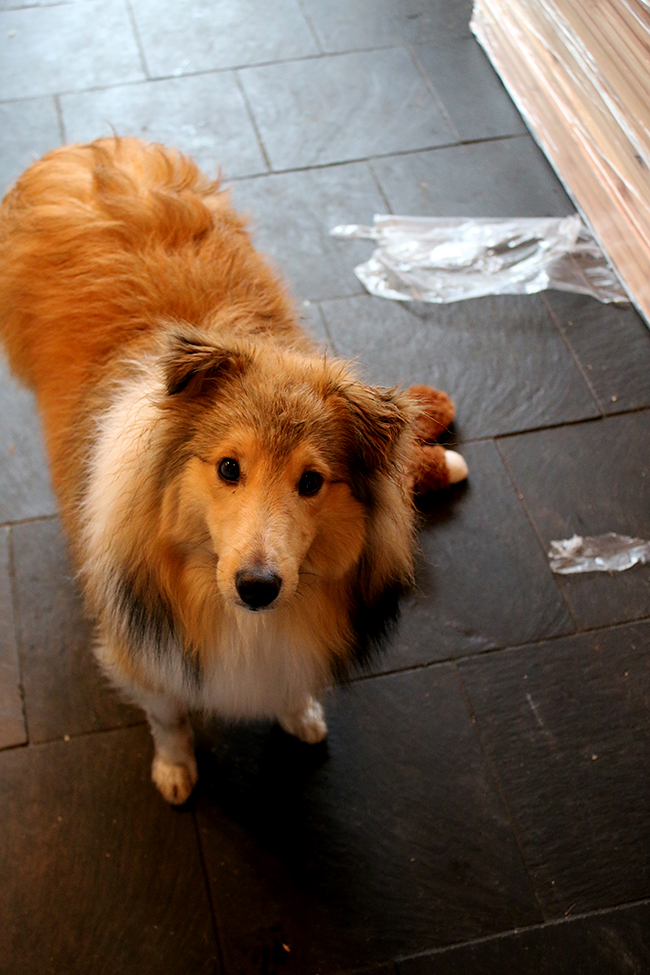 I swear I tried to talk Wayne out of it but he’s not the type to get “man flu” or wallow in sickness so I stepped aside and let him get on with it. By 4pm, we had two tricky pieces left that required trimming and fitting into uneven spaces at both ends and he was seriously flagging and his energy levels were non-existent. He laid down for a bit to watch the football.

I’ll finish it during half-time.

Oh, yeah, he was insistent he would finish the job. Well, half time came and he came upstairs where I was working. He looked like a broken man.

Well, I could have told you that.

So I told him to lay back down. I got to work cleaning up all the mess and dust and then prepared dinner.

He couldn’t finish his dinner and started to develop a temperature. He was so sick, you guys. And I felt so bad for him. And I wished we’d not started the work this weekend because he has a very physically demanding job as it is and then he did more physical labour for hours on end all weekend. So I spent the rest of the evening just taking care of him until he went off to bed early. Thankfully, his fever broke in the night and he actually got up and went to work today. Either he’s completely mad or he’s a hero, I’m not sure which one.

Anyway, that meant I didn’t have time to edit photos and write this post until today so that’s why my post is late.

So here’s where we ended up… as you can see most of the new flooring is laid now. Quito decided he would model for you. To the left is the skirting board that had been removed. 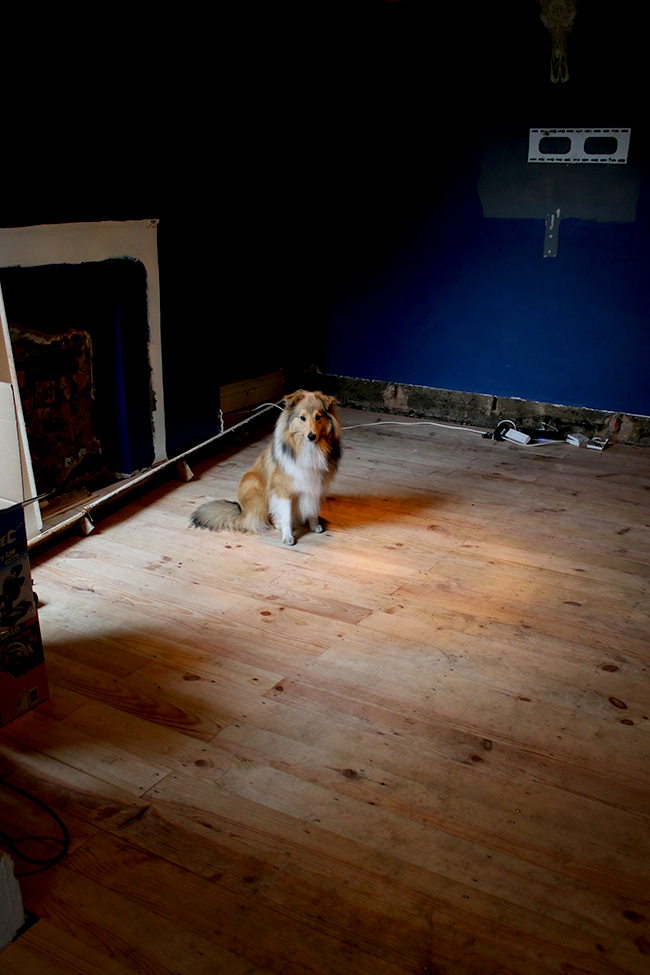 We’re missing two pieces that need to be cut to size and fitted but hopefully that shouldn’t take too long to sort. 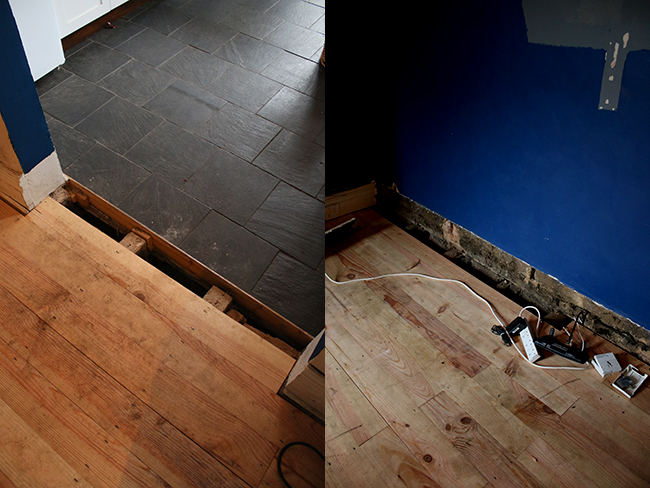 The floors need to be scoured clean in preparation for the stain and once the stain is down, we can seal them. Whether that happens this week, however, remains to be seen. Hopefully if Wayne is feeling a bit better as the week progresses, then we’ll ‘tag-team’ it like we did in the office with me doing a coat in the morning and him doing one in the evening. Fingers crossed!

In the meantime, I’m happy the work is done and hoping firstly, that Wayne is feeling better soon because I love him and I hate to see him sick and secondly, that I don’t catch whatever he’s got. Wish me luck.