Why there’s not been any progress on the kitchen!

So you might be wondering why nothing has happened on the kitchen this year when I said it was going to be a priority for me to try and get it sorted out and maybe (gasp!) finished this year. Well, it’s now September and the kitchen doesn’t really look too much different than the last time you saw it back in May! 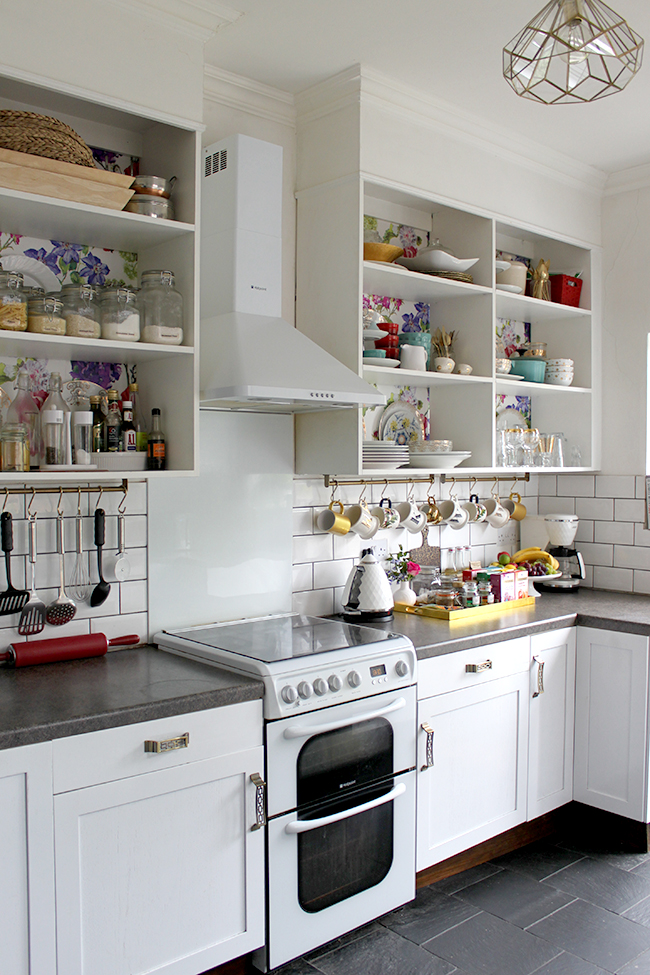 I’m going to attempt to explain in this post so it’ll be a bit long and rambling and so I’ll apologise for that right now.

Here’s the thing. It may seem to the outside world that we interior bloggers know exactly what to do to make a space our own or to give it that magic touch but the honest truth is, I get stuck sometimes just like everyone else. And it takes me a while to sort through all the inspiration, to decide what I really want and then for my bank account to slap me square in the kisser and tell me to wake up and start looking at more reasonable solutions that don’t include getting into debt up to my eyeballs. And then starting again. Rinse and repeat.

As you may be aware, the kitchen and the dining room are open to each other which means whatever I do in one room, it needs to marry up with the other for them to flow visually together. Obviously my kitchen at the moment is bright white and my dining room is dark blue with touches of pinks and orange but those colours are pulled into the multi-coloured floral wallpaper behind the open shelving and my furniture in the dining room is mostly white and of course, both spaces have a lot of brass and gold so they do work together as they are right now. 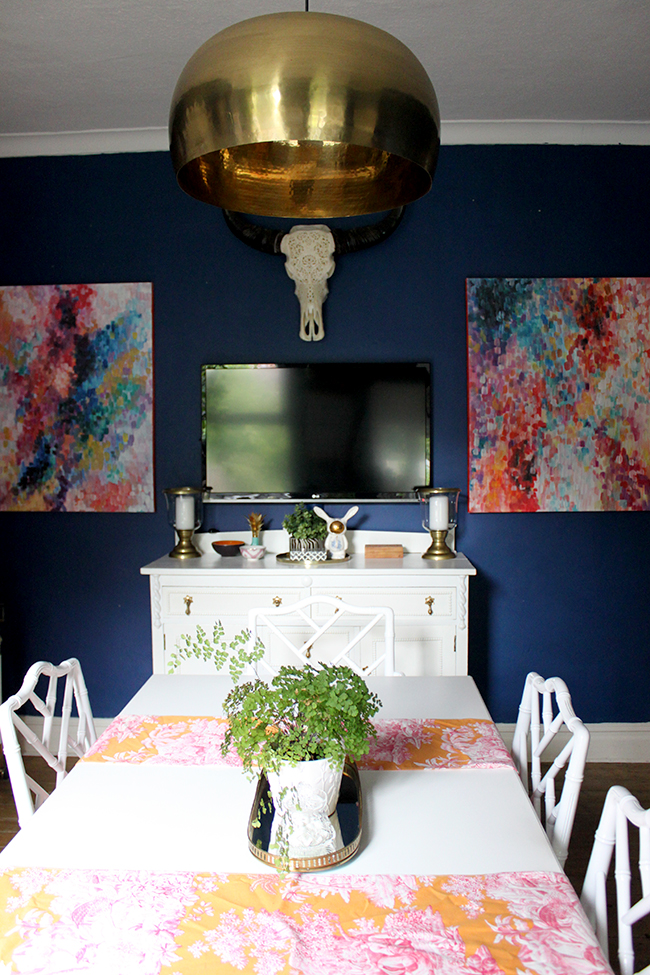 My plans for the kitchen include getting a new worktop, repainting the cupboard doors and getting new handles as well as replacing the sink and tap. But we also need to trim out the existing tiles which we failed to do the first time around, raise the cupboards themselves about 2cm and get new toekicks.

So of course my brain starts to go into overdrive because I think, if we’re doing all that work on the tiles (with the most likely solution, having to remove the entire top row and all the ones down the sides at the edges to install the much-needed trim) then why not just rip them off and put something new in there?

And then I think, well if I’m going to do that, because I can’t justify a marble worktop which is what I’d love, then why not get marble tiles instead?

But then I have to consider… A few months ago, I’d decided to bite the bullet and go for marble-effect laminate, now that’s not going to work any more with real marble tiles on the splashback and laminate effect marble on the worktops – that’ll just highlight how fake the countertops are, right? So I’d need something different for the worktops. Or should I just keep the white subway tiles and regrout in white and get the marble-effect laminate because that decision has already been made and this worktop decision has run on and on for years now? Gah.

Now let’s consider the dining room. As you may know, I have some plans on changing that too. When I removed my gallery wall, I was left with about a million nail holes all over the wall which all need patching and that means the walls really need to be repainted (if it was only a couple of holes, I’d just touch them in but we’re talking a LOT of holes). All well and good but when you have the attention span of a gnat when it comes to decor, the last thing you want to do is go through all the trouble of repainting and end up with the same look as before. No, I think, why not repaint a different colour? 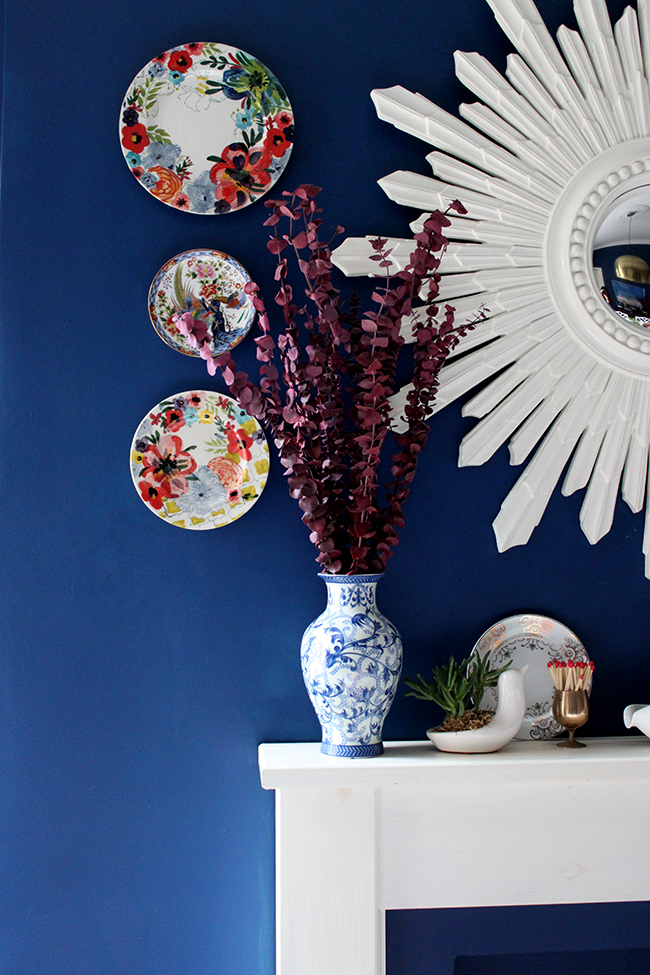 Now let’s go back to the kitchen… I want to repaint the lower cupboard doors as well. I also want new handles on the cupboards (already picked out but not purchased) so they’ll need to be patched and repainted anyway. And I love the look of a two-toned kitchen and I live with a car sprayer that can do this stuff for me so I might as well take advantage of that fact, right?

But if I change the colour of the dining room, the likelihood is, I’ll have to match the colour of the cupboards in the kitchen – at least they’ll have to be similar anyway, tonal or shades of the same colour would be okay too as long as they work well and tie the two spaces together nicely. At the moment, two colours are on my radar – a dark cranberry colour (similar to the dried eucalyptus above) or an emerald green – a colour I’ve been dying over recently which might tie in nicely to the living room with all it’s greens as well.

I mean, how gorgeous is this colour? 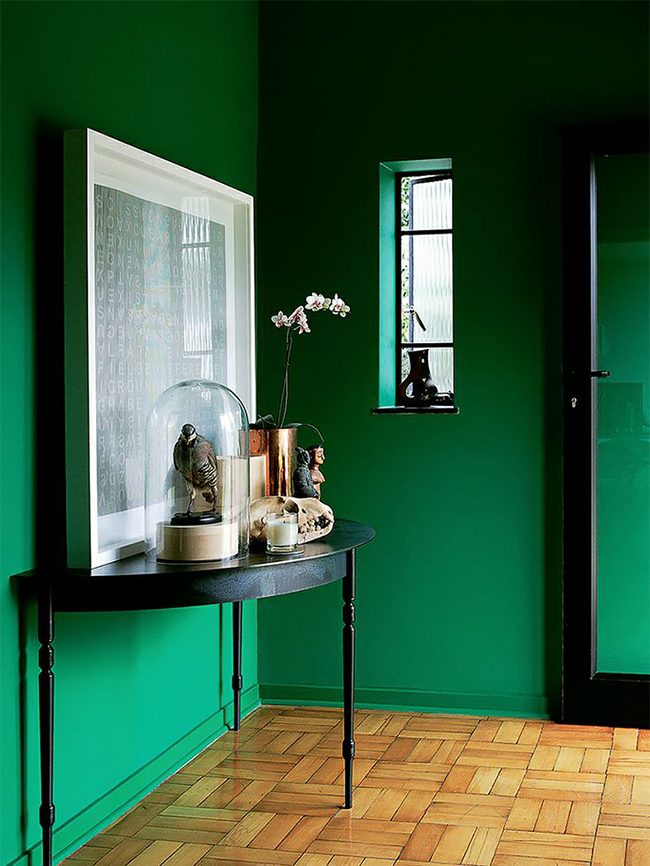 Or the berry red? I struggled to find rooms in this colour strangely but this is kind of what I’m playing with… 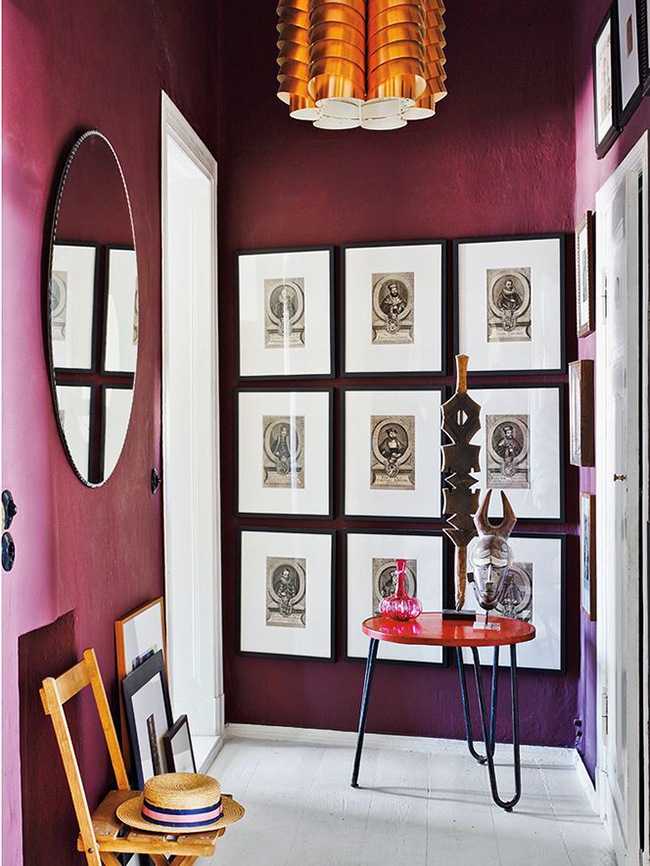 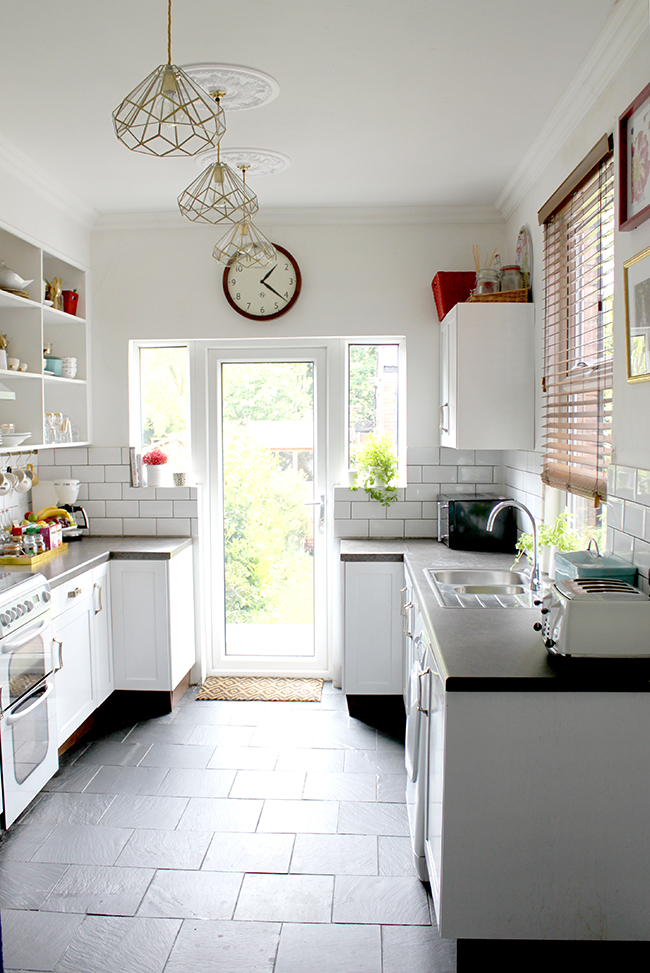 I’m thinking if I did go for the green, I’d look at something like this… 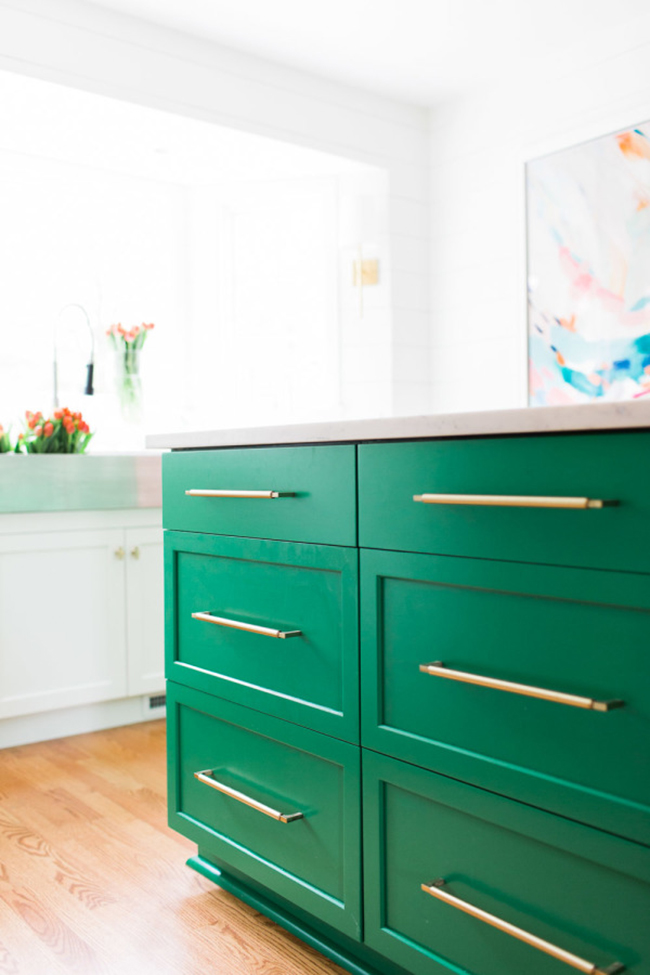 Alyssa Rosenheck via Style Me Pretty

I couldn’t find a kitchen using a dark berry red for the lowers but you kind of get the idea I hope! It doesn’t have to be the exact shade but something similar might work well.

But the truth is, I don’t even hate the blue in my dining room – it’s just like this weird drama going on in my head saying THERE’S NO WAY YOU ARE PAINTING THAT DINING ROOM THE SAME COLOUR AS BEFORE. Plus, we need a new rug in the dining room anyway – our puppy Quito has done a number on ours, chewing on it, putting holes in it (he’s not doing this as much now thankfully) and he does – yes I know this is gross, sorry – like to use it as a toilet. Dear god. Potty training otherwise is going really well but he can’t seem to let go of the rug despite me dumping about a million gallons of enzymatic cleaners on it and taking him out throughout the day as much as possible – sometimes he’ll come from outside after we’ve stood around for 15 minutes waiting for him to ‘go’, just for him to go straight to the rug and go on there. So it needs to go and I need to find something else… so I think well, as long as I’m getting a new rug, I might as well change the colour while I’m at it. 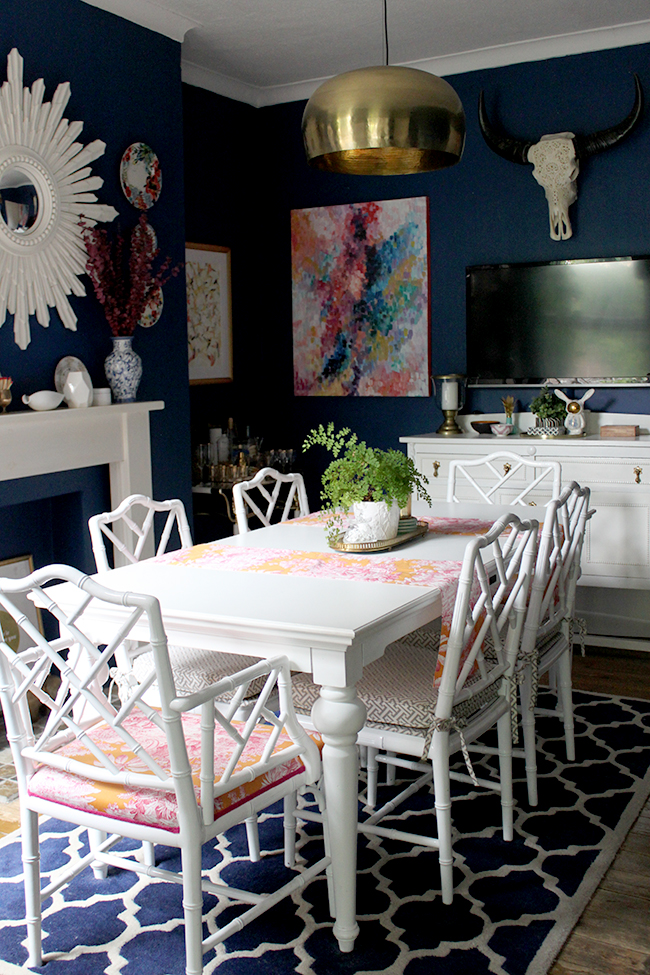 Plus, we need to finally do the floors in the dining room (5 years on, I’m ashamed they are still not done), the side chairs need re-upholstering and I want to move the TV to the wall where the smaller console is and replace the white sideboard with something in wood – so there’s already money that needs to be spent in here – will changing the colour mean I’ll need a few other new things as well to tie to the new colour palette and will I be driving all those costs even higher?

Everything is interconnected now in my head – I change one thing and it has a knock on effect to everything else. And nailing down what I want to do so it all works together beautifully is sometimes harder than it sounds.

Let’s also add to this that when I mentioned re-doing the tiles in the kitchen Wayne told me emphatically that he’s not going to start ripping out the kitchen before Christmas. So there’s my DIY guy opting out of doing anything in there this year. Not to say I can’t paint or do other things before this time but it does put a damper on it being on the so-called ‘priority’ list. Hmph. 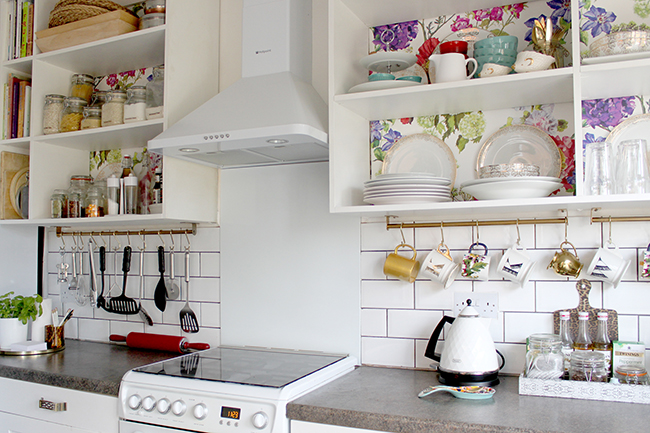 So this is why nothing has been done yet. If I just kept the dining room the same colour, things would probably be easier but that’s just not fun. But it’s PRACTICAL – totally practical. Someone want to save me from myself? Should I just leave the dining room blue, repaint it and get on with the kitchen already or should I give in to the voices in my head that say I should try something new? If so, which colour? Emerald or Berry? Should I go with marble tiles or should I just keep the subway tiles and redo the grout in white? Weigh in below in the comments – I’d love to hear from you!