An Update on the Man Cave (and a cute copper table)

As you know, Wayne “finished” his man cave 2 1/2 years ago. I used those quote marks on purpose because it wasn’t actually totally completed and there were still a number of little jobs to be done but it basically got a stamp of ‘good enough for now’ on it and we moved on to other projects around the house.

Fast forward to April of this year when I went away to Dublin for a weekend with 2 amazing bloggie mates (Alex and Maria and yes, you should check out their blogs because they are both very smart and very cool and very funny and I’m not sure I’ve ever laughed so much in one weekend). Whilst I was away, I left Wayne on his own. Now this of course was my mistake because leaving a man on his own with power tools is always going to be a risk. And when I returned, he’d basically removed one of the walls in his man cave (!) and shifted the TV to a different wall.

So we went from this… 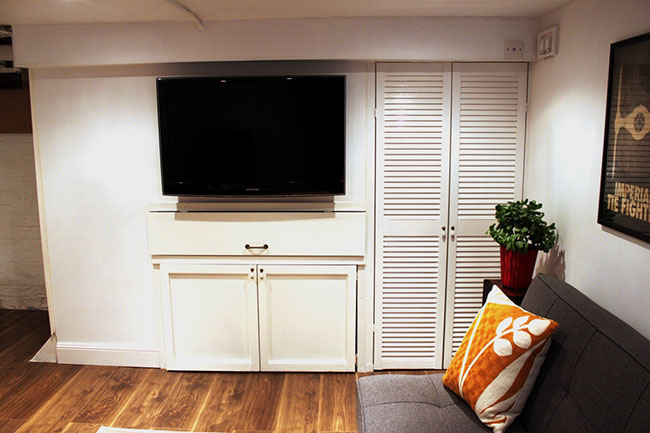 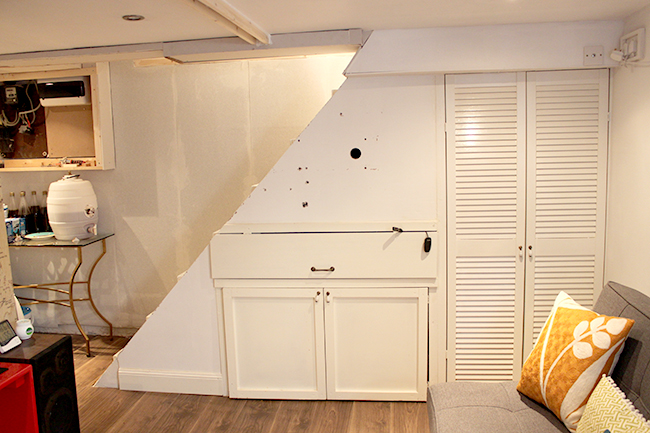 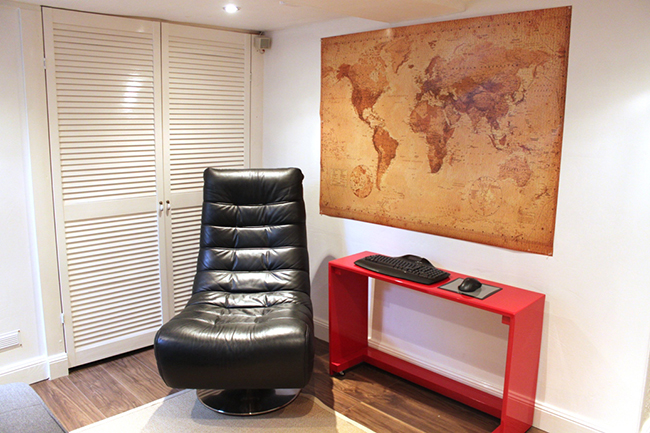 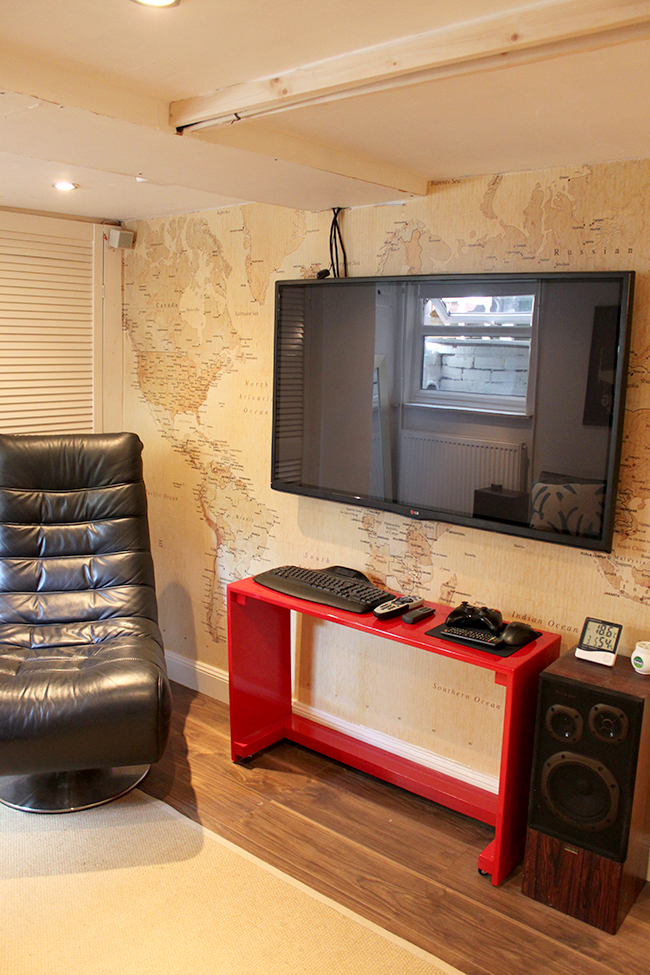 Now, after I got over my initial shock, I didn’t really mind him doing this – he’d been talking about wanting that wall gone to open up the space and as he uses the cellar and I don’t, he can basically do what he likes down there. However, I knew this would have a knock on effect in that now instead of 100 little jobs that need to be taken care of, he’s multiplied it by about 1000. Sigh. And we still have other jobs to do around the house of course, so it’s all just getting done as and when he gets around to doing it. 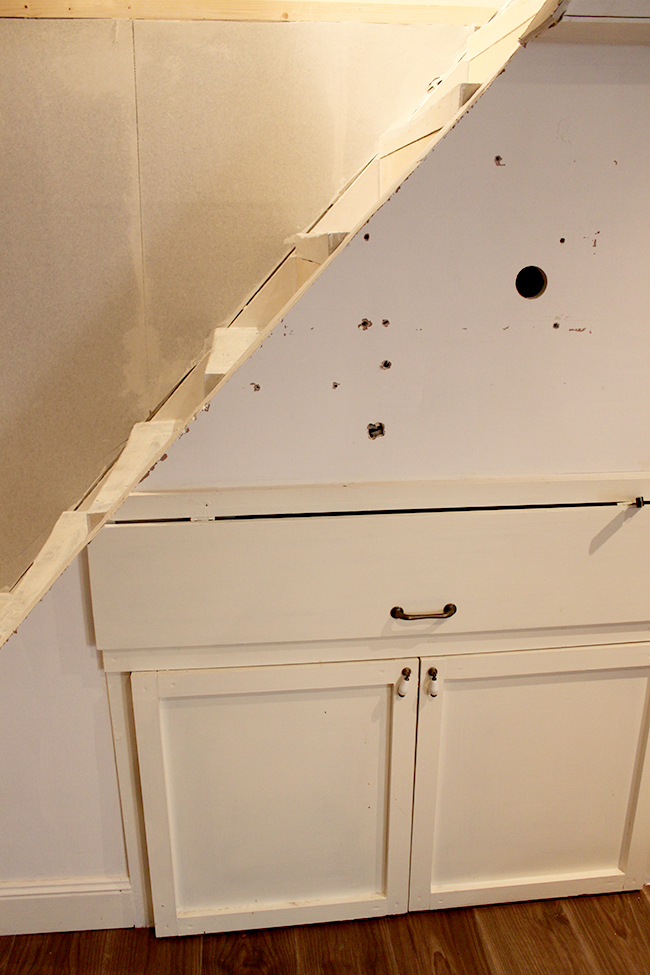 This makes my eyeballs hurt.

At the moment, he’s just installed some soundproofing insulation on a few of the walls so that all needs painting and finishing, he’s building a box around the electrical box which needs little doors on it and we need to sort out the stairs and get a runner. But there’s also new holes where the old TV has been removed, wires that need sorting out, new doors and frame that need to be installed under the stairs as you can see above and pipes that need to be hidden. It’s not pretty at the moment.

We’d actually installed that large map wall mural about a year ago which I don’t think I’ve ever shown on the blog and it does make the space look more ‘finished’ despite the amount of work still needed! And of course those wires need sorting! 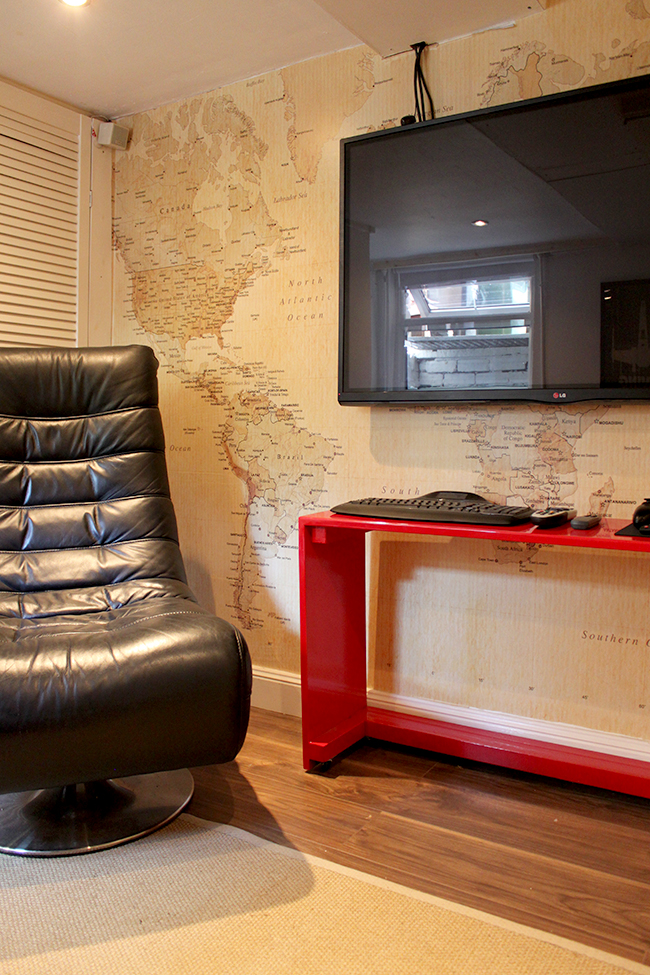 He’d also previously hung an old door we used to have at the top of the stairs to the cellar in the opening to the small storage area we have there. It’s not a perfect fit clearly but it does the job of keeping the cats out of there! 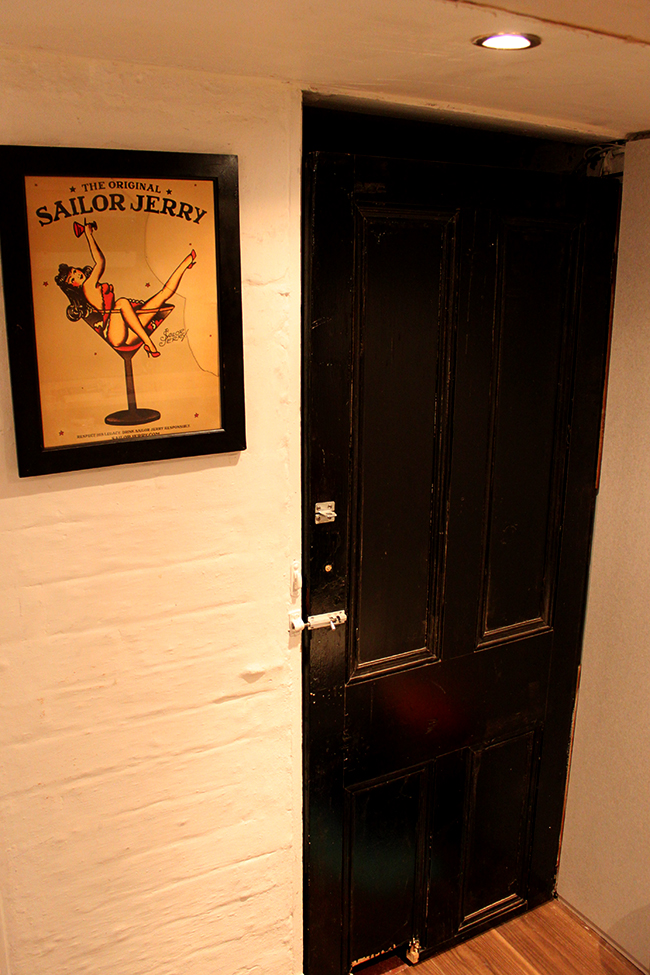 One of the things he did realise as he was shifting things around is that he really needed a small table down here. A coffee table would make the space a bit cramped but a side table would be perfect for setting down a drink or the remote control. I’ve been keeping my eye out for something nice and functional for him so when The French Bedroom Company contacted me asking if I’d like to review something, I knew I’d found something that would be perfect down there – this small copper side table. 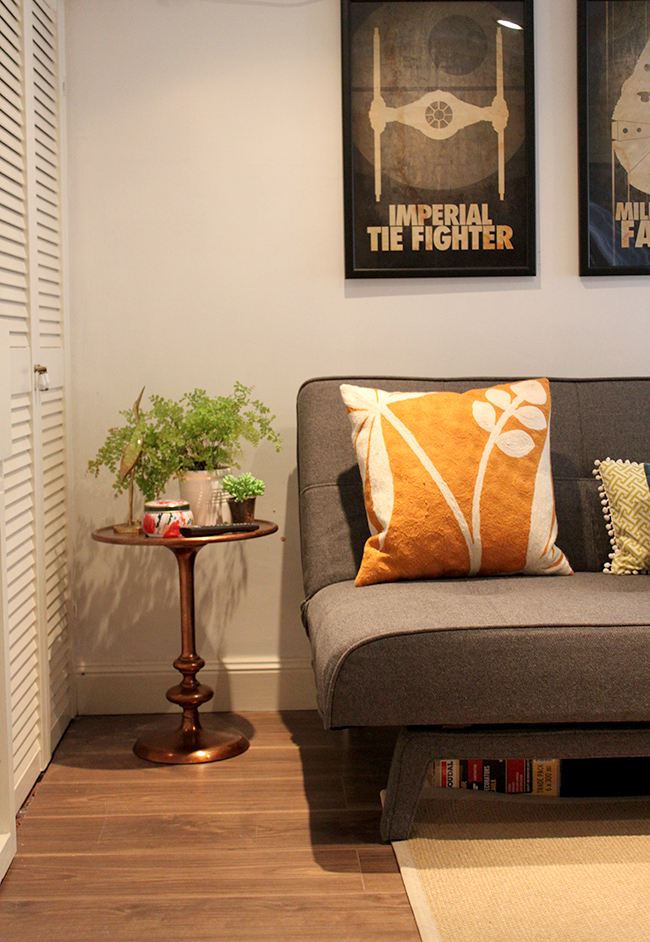 The predominate colours down here are pretty neutral save for the bright red rolling console and a few of those cushions which really need updating by now! (Apologies for the lighting in these shots – it’s obviously the cellar so it doesn’t get a lot of natural light!) I knew adding some metallics would just help to keep things looking too plain and reflect a bit of much-needed light around the space. 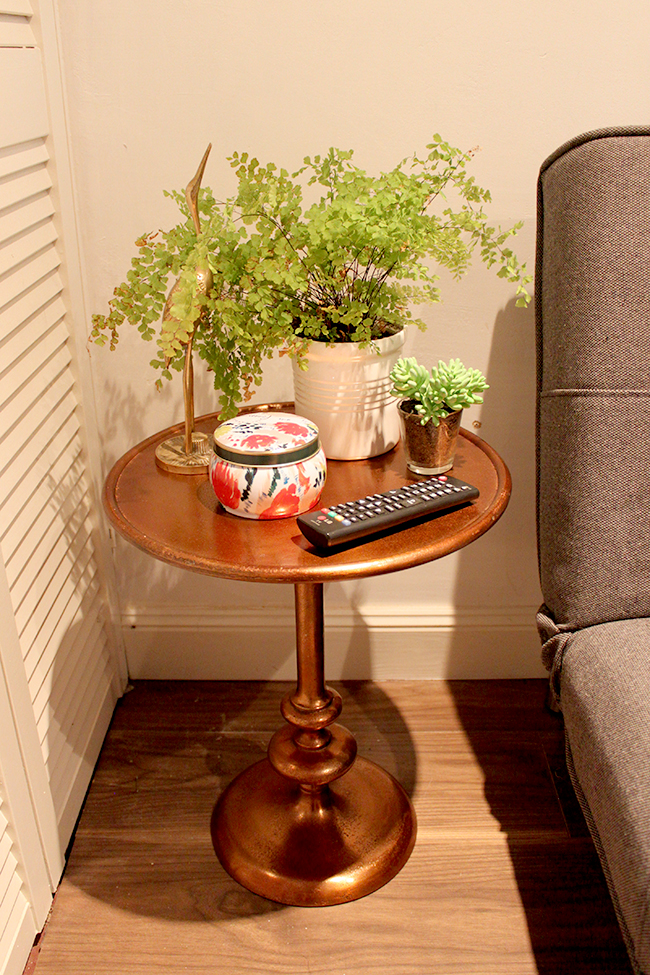 I don’t get much of a say around here when it comes to the décor but I knew he wouldn’t object to something so classically good looking and thankfully, he likes it as much as I do! As much as I am a die-hard fan of gold and brass, I do think copper is a very pretty metal and I thought the warm orangey tones would be a great match. So whilst there’s still a million and one things to sort out down here, at least we’ve got a lovely little table down here! 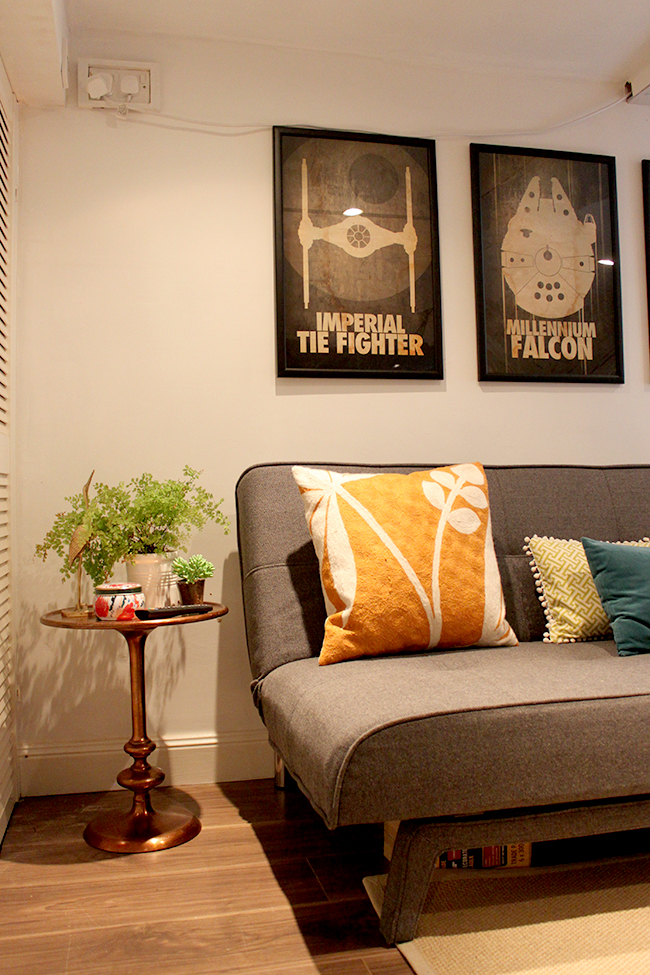 While we’ve got a ton of things to sort out and progress will likely be slow, we’re hoping to continue to tackle little jobs here and there and of course, I’ll keep you updated on finishing this space – again! 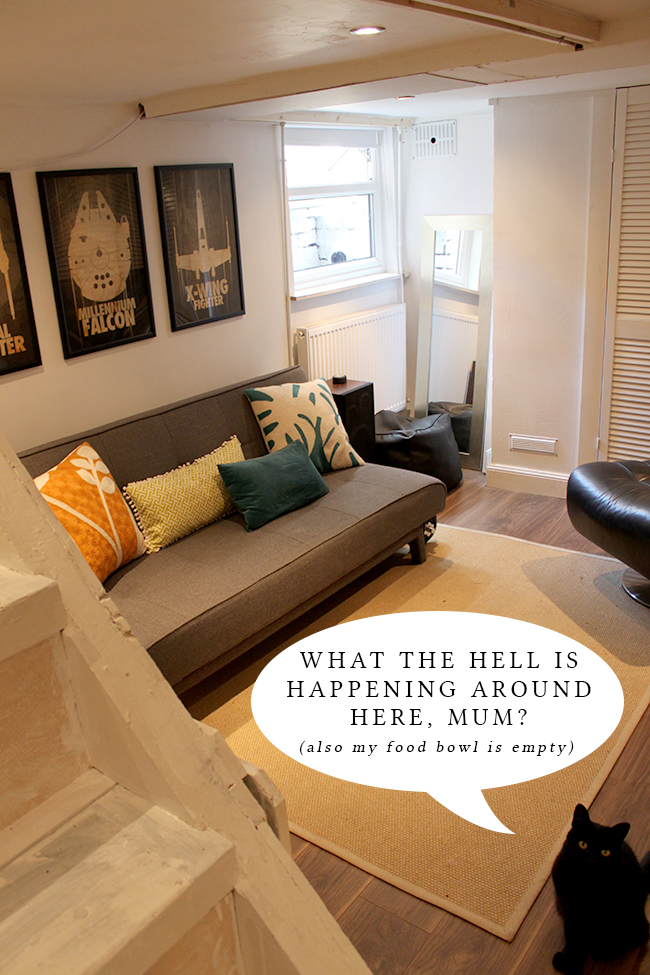 In the meantime, do check out The French Bedroom Company for really beautiful furniture and accessories. My white cowhide rug in the living room is actually from there as well and it’s always a lovely website to do a little dreaming and shopping!

What do you think of the changes down here so far? Are you digging copper in your interiors? Has your other half ever surprised you with starting huge DIY projects whilst you were away or is that just Wayne? Talk to me!

Disclaimer: The copper side table was gifted to me in exchange for my review but as always, all images, opinions and poor attempts at humour are entirely my own. I only work with companies I really like and think you will too! Thanks for continuing to support the businesses that support Swoon Worthy!