As I announced on my post on Friday (and as shared on my Instagram, Twitter and Facebook feeds!), it was ‘puppy pick up day’ on Saturday where we travelled up to the heart of the Yorkshire Dales to finally bring home the newest member of the Swoon Worthy family. 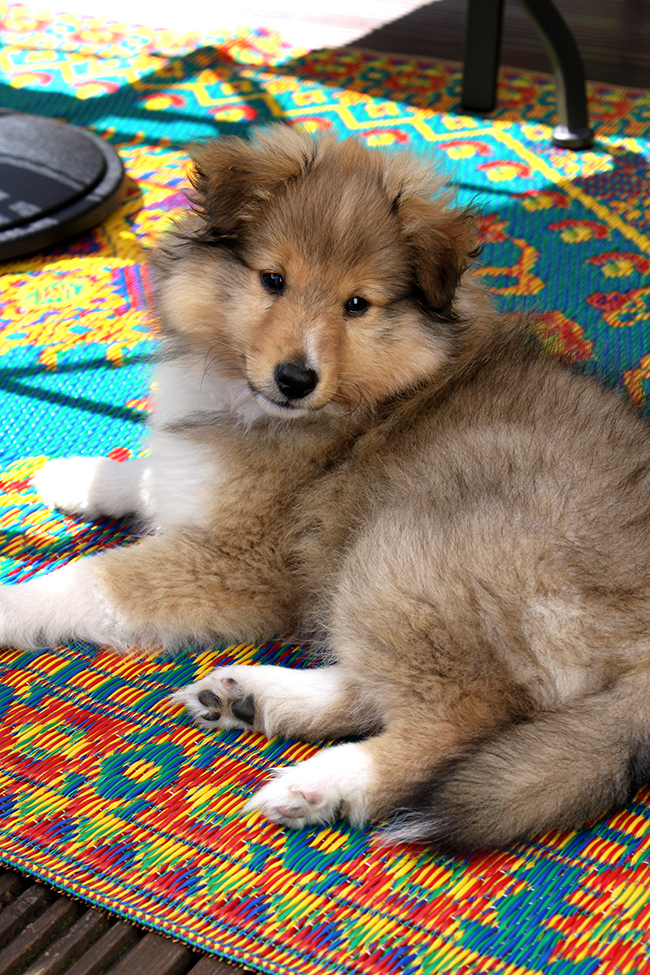 We’ve named him ‘Quito’ (pronounced like you would say the words ‘key’ and ‘toe’ but together, kee’-toh) after the Ecuadorian capital. Wayne travelled around South America a few years before we’d even met and thought that if he ever had a dog, he wanted to call it Quito. Obviously I wasn’t going to take that away from him (plus, I got to name Meisha) so the name had been decided before we’d even settled on which dog we were getting! 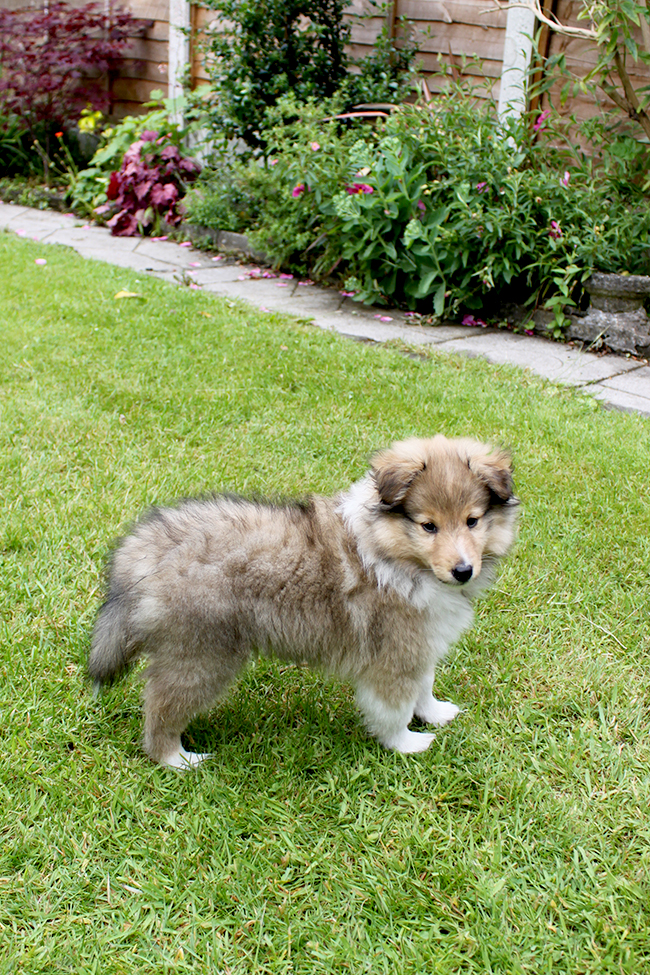 As you probably already know, we are huge cat lovers but the truth is, we have always wanted to get a dog. However, with both of us working full time outside of the house all these years, it just seemed unfair to leave a dog home alone for so many hours during the day. So we never felt comfortable with getting one in the past. Now that I work from home, however, it seemed like the perfect opportunity to finally get a pup to round out our little family. 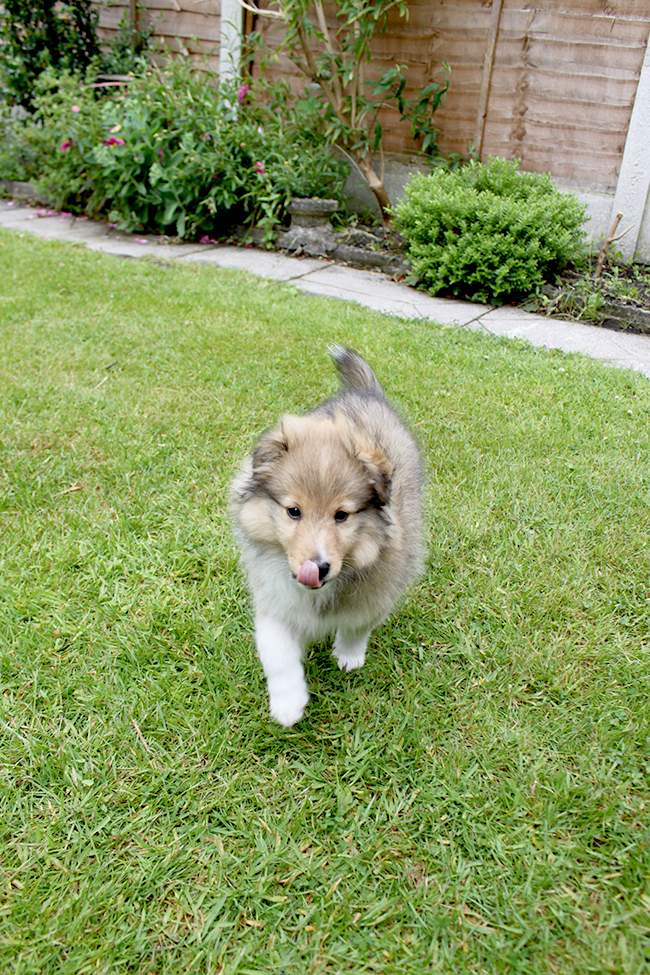 Everyone I’ve spoken to who has had or known Shetland Sheep Dogs (or Shelties as they are called) speaks so well of them – they are highly intelligent dogs and easy to train and get on well with both animals and children as long as they are properly socialised. This was really important to us with 2 kitties at home and 3 young nieces and his small size worked well for us in terms of his exercise requirements. Plus, while our house isn’t tiny or anything (well, not to UK standards), the room sizes are small and the garden is fairly small so getting a large dog just wasn’t a viable option. The more we read about Shelties and the more we talked to people who owned them, the more we fell in love the idea of having a Sheltie ourselves. 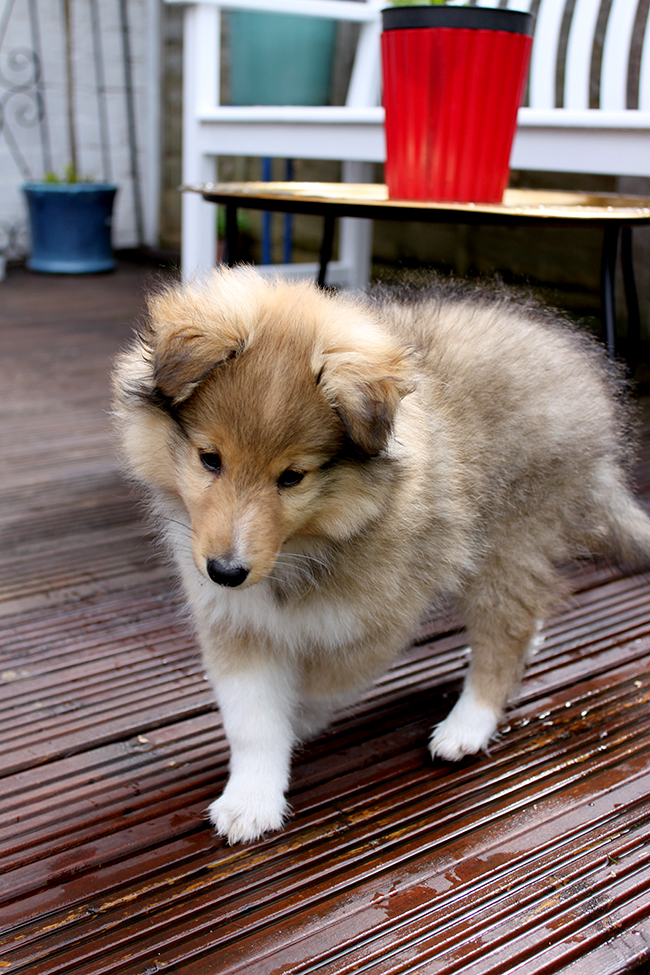 Also? They are just gorgeous. Full grown, they basically look like miniature Rough Collies (ya know ‘Lassie Dogs’ as I used to call them although they are considered a separate breed altogether, they do share so many physical characteristics). Rough Collies are significantly larger and Shelties are just little things and normally don’t get much bigger than around 15″-16″ at the shoulder. (You can see the difference in size in this image from Wikipedia.)

So enough about the breed and let’s concentrate on our little boy. Wayne took this video and yes that’s me in the doorway of our messy garden (a work in progress I swear)! Ha! But it’s a great example of how much energy he has when he really gets going!

He’s only been with us for around 24 hours as I write this post so it’s very very early days. However, I can’t get over how happy and well-adjusted he is already.

He is basically just a ball of fluff with little legs and a little snout and the most soulful little eyes you’ve ever seen. He’s so eager to please and he is already responding to his name (!). He wolfs down his food with a voracity I have never before witnessed in person (2 gulps and the plate is clean) and you can just tell he LOVES his food (I’m hoping this means he’ll be easy to train!). He seems happiest and most settled when we are both seated – they are a herding breed so in their mind, when everyone is seated, this means their ‘herd’ is safe and they can relax. How cute is that?! 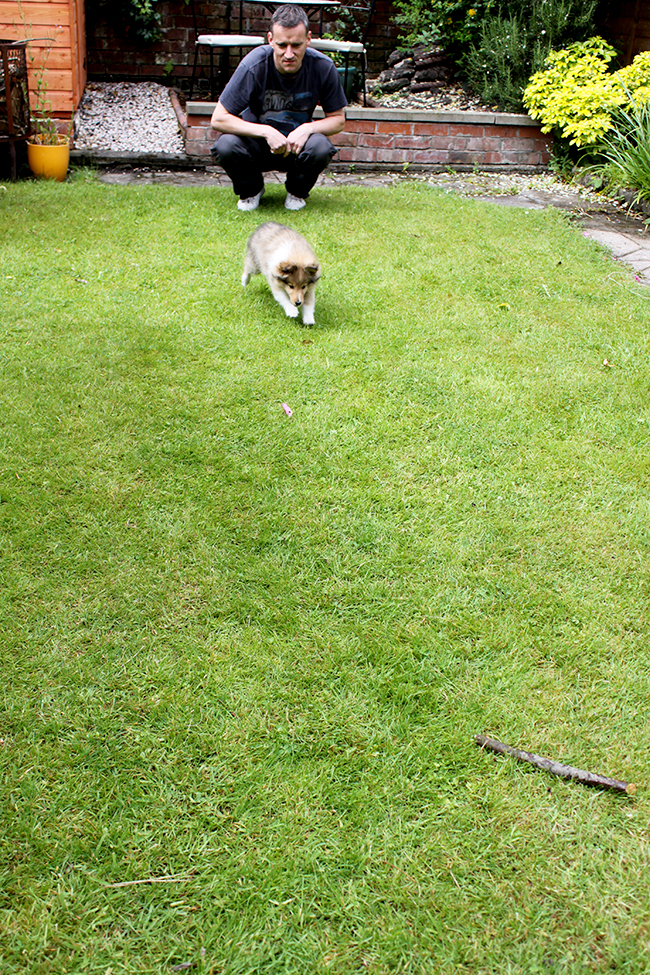 We had a little play session with him this morning – he’s already got like a million toys but he loves playing with these sticks so we were running around with him in the garden. After a bit of play, he’s currently conked out under my feet as I write. As a kitten, Meisha never seemed to tire out so this is sort of a relief that he does have ‘downtime’ unlike Meisha who was just a terror ALL DAY! ;) 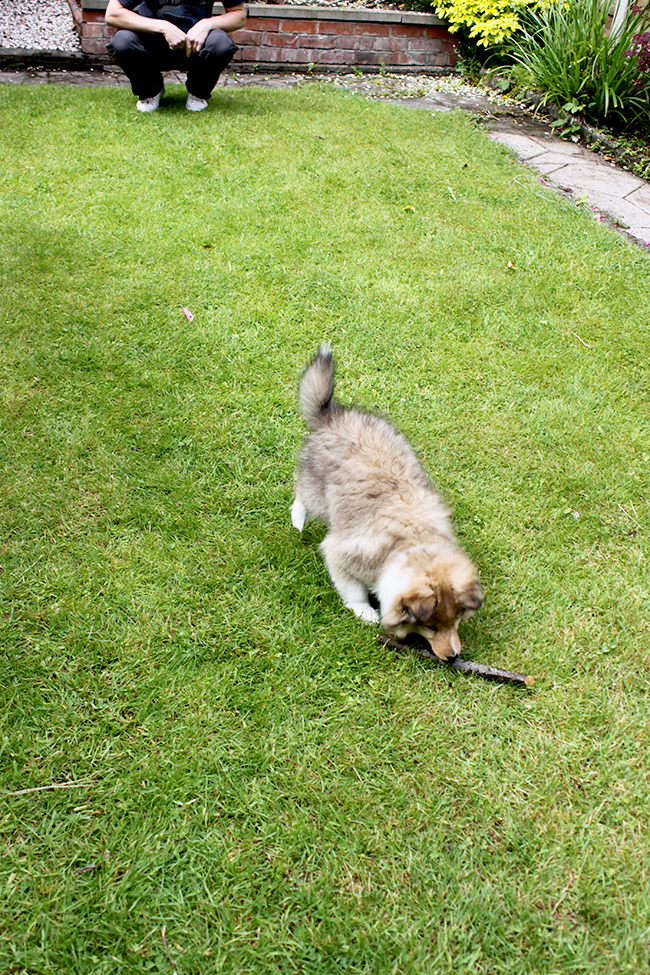 Speaking of the cats… well, it’s funny how well we know the personalities of our Meisha and Pablo. We knew full well that Pablo would be great with him. He’s just the most nonplussed cat you’ll ever meet, so totally chilled out and we figured he’d be a little unsure of him and then once he realised there’s no threat, he’d be fine. And yes, this was exactly his reaction. They aren’t quite ‘friends’ yet and Quito is definitely curious of Pablo and has tried to play with him but Pablo is having none of it and is basically just watching him from a distance. 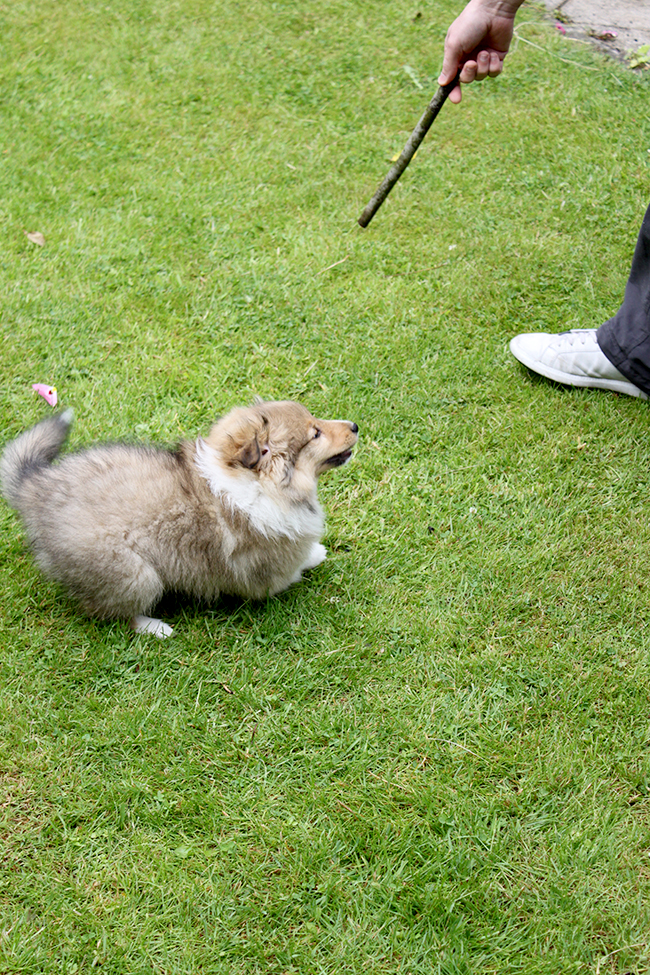 Meisha on the other hand has been a little more difficult (no surprise there then). We knew this going in because for as ballsy as she is with humans (no fear whatsoever), she’s absolutely petrified of dogs. So even bringing in this little ball of non-threatening fluff has been an adjustment for her and she’s basically turned to bunking out in the safety of the upstairs, presumably until he leaves. Sorry to break it to you, Meisha, but he’s not going anywhere. So we’re letting her adjust in her own time – I’m sure she’ll come around to making her way downstairs eventually (we put food, water and a little litter tray upstairs in the meantime because we know she won’t come down for those things out of fear). We reckon over the next week or so, she will get used to his presence and his smell (every time she catches a whiff of him or hears him, she hisses at nothing in particular) and we’re of course hoping given that they both are quite intelligent and playful, they will become friends. But for now, we’re just giving Meisha her space and going up to fuss over her a little which is greeted with lots of purrs and kitty kisses. She’s just scared. She’ll get over it though I’m sure. 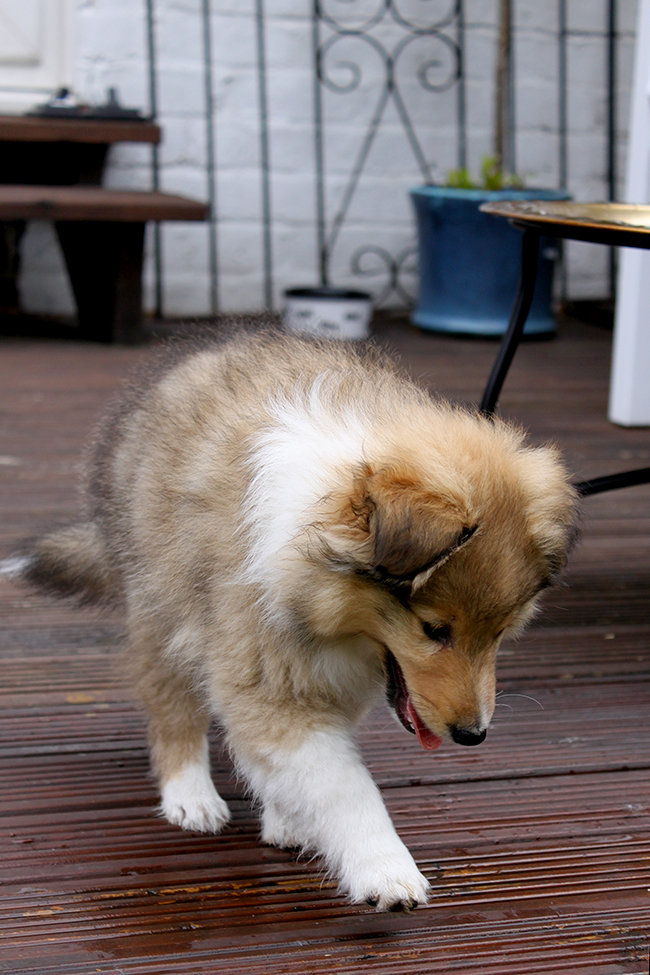 In the meantime, we’ve been trying to educate ourselves as much as possible with raising a bright, well-adjusted dog and I’ve been reading my puppy handbook every day. Teaching him to go potty outside hasn’t been a great success so far (again, he’s only been with us for 24 hours so it’s REALLY early days) so if anyone has any tips on toilet training, I’m all ears!! I do have a book as I said where we’ve been trying out the methods there but so far, no such luck – he just doesn’t seem to understand I want him to ‘go’ when we’re outside. Hmm. 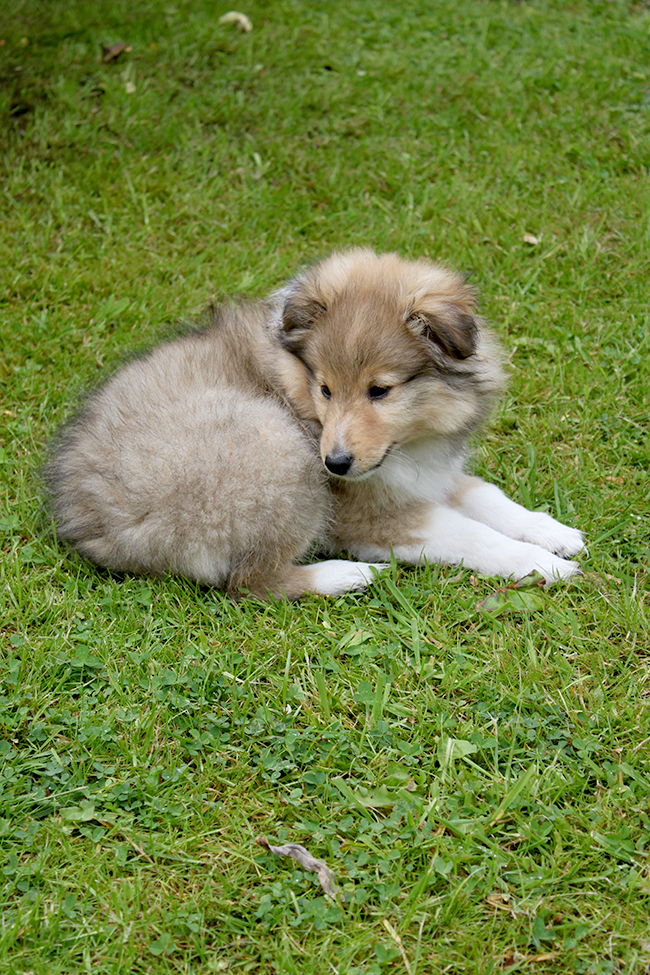 So yes, of course, you’ll probably see a lot more of Quito as he grows up. We’re big animal lovers here at Swoon Worthy HQ and our pets are part of our family so it’s just inevitable that I’ll talk about him! Apologies to the non-animal lovers of the world – normal interior design posts will resume shortly of course – although I simply can’t understand how you COULDN’T fall in love with that face. N’aw!

Remember when I introduced Meisha? You can see some really cute kitten pics here.

*For those who might ask why we didn’t get a shelter dog, please understand we had very specific reasons for our decision, not all of which I’ve shared here on the blog. Both Pablo and our cat Senna (now passed) were shelter kittens but everyone’s circumstances are different and sometimes rescue dogs are not a viable option so I would ask that you please be respectful of our decision. Thank you.