So… ummm… the gallery wall is gone.

First off, thanks so much for all the comments on my post on Wednesday. I knew you guys would have opinions on this topic and I was so pleased to hear from so many with different takes on whether the gallery wall is falling out of favour (or just the ones we see that aren’t done well!). I suppose after all that, I still think there is room for them when they are done well and with panache – I just didn’t really think the one in my dining room was one of them – so therein lies my frustration with it.

Forget what it looked like before? Check it out here.

After that great discussion (which obviously is still going on so if you haven’t weighed in, please do!), on Thursday morning, I got up, took one look at my gallery wall and without a single plan for what was going to replace it, I took the whole thing down. I know, I’m impulsive what can I say. 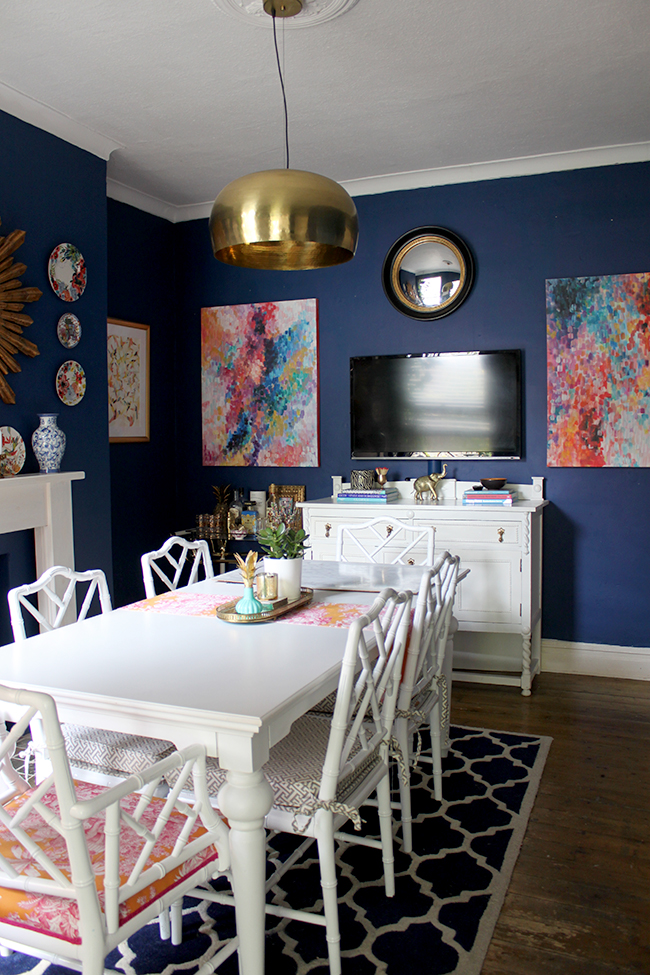 Obviously, I had to figure out what to put back up on the wall because a totally blank wall with just a TV wasn’t going to do either. So I figured I’d just use what I had already in the room, swap out a few things and give the whole space a little ‘breathing room’.

So what you are seeing here is totally NOT the intended ‘finished product’. Not even remotely. I mean, there’s crap on the table – a puzzle we’re working on that’s covered so the cats don’t steal and eat the pieces. (Yes, a PUZZLE. So retro, aren’t we?! ;)) and I don’t even have any flowers at the moment and there are a bunch of boxes under the console (new lighting for the kitchen! whoop!). So yeah, this is a ‘where we are right now’ sort of update. Also? We SO need to do the floors in here, it’s embarrassing. 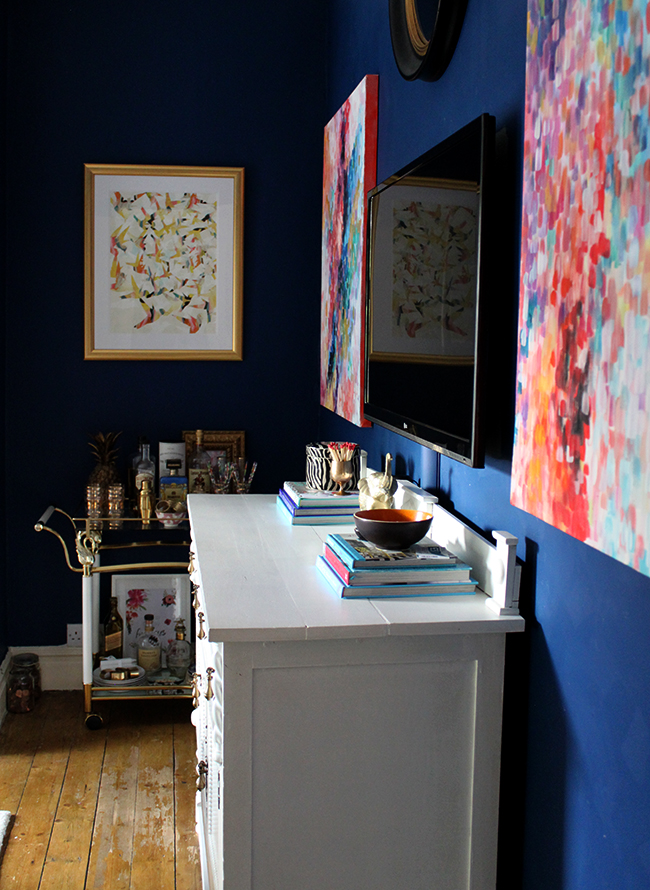 I also still want to move the TV off the wall (probably to the wall where the smaller black console is). I’m also considering replacing the sideboard with something else (something longer and lower and maybe wood?) and what’s actually going to end up here after we do all that is really anyone’s guess. 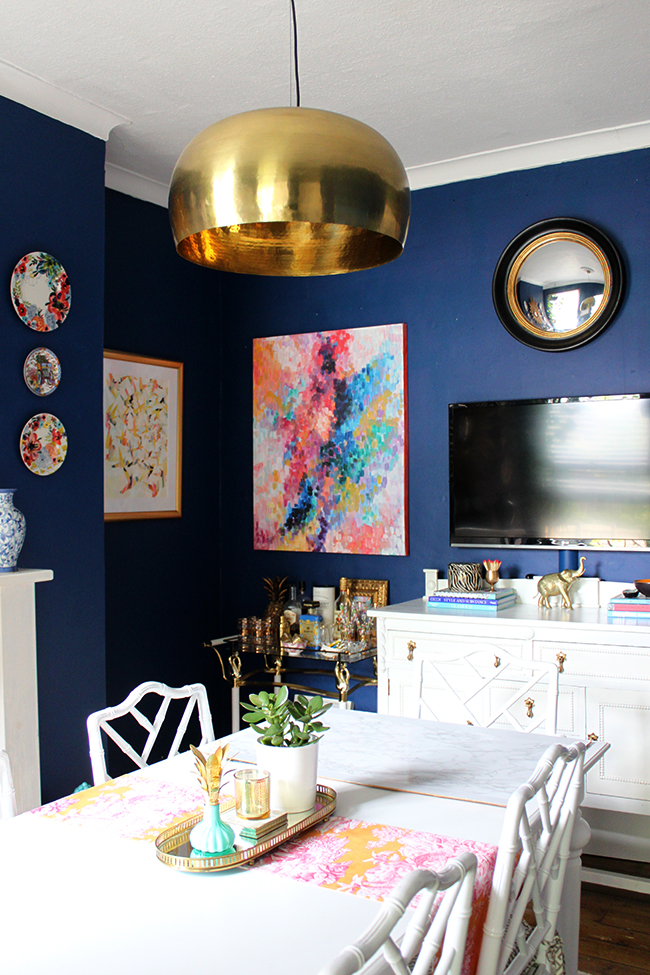 For now, I used my own large DIY abstracts to frame the TV and I ‘borrowed’ the mirror from my office as a bit of a place holder for now. I also moved the bar cart from in the alcove to alongside the sideboard although you can see in my pictures, I’ve done it both ways. I also finally hung the large photographic beach scene that’s been in my hallway for ages over the console table. Notice the lovely hole marks left behind from moving around art. Ahh yes, EVERYTHING needs to be patched and painted. It looks like the room has been in a war. #keepingitreal 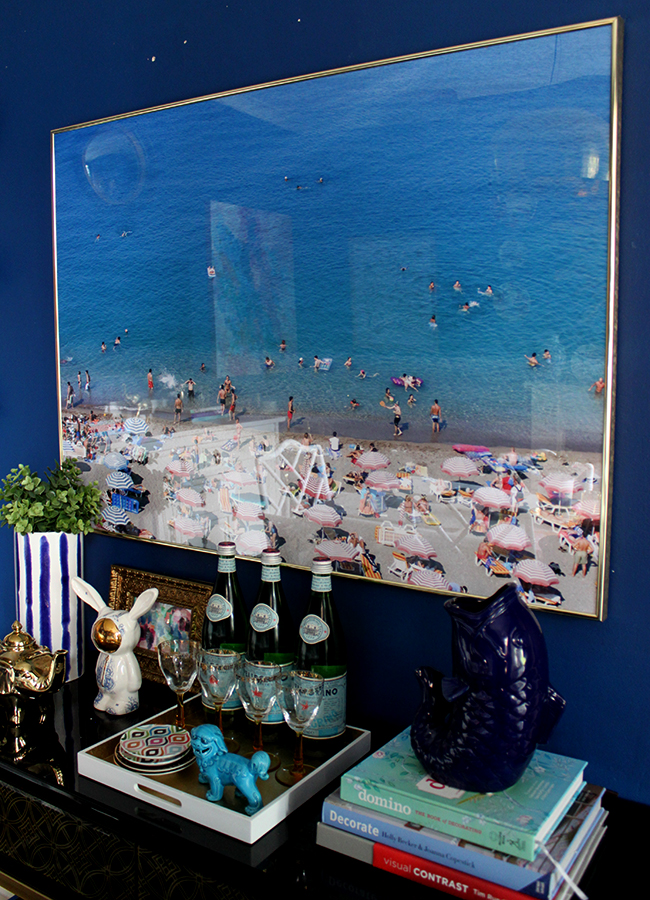 I’m not crazy about it or anything but it’s sort of one of those ‘this will do for now’ sort of looks. It’s all trial and error this decorating lark, right? So this is a first try.

Obviously we have other projects on the go right now so I can’t really go spending on new furniture or new art or anything like that. Everything you see is ‘filler’ until I make a decision. I just knew I couldn’t look at the gallery wall anymore. Crazy, no? I did love it at one time, I really did.

Oh and as I said, not sure about the location of the bar cart – I’ve done it both ways, can’t decide. What do you think? 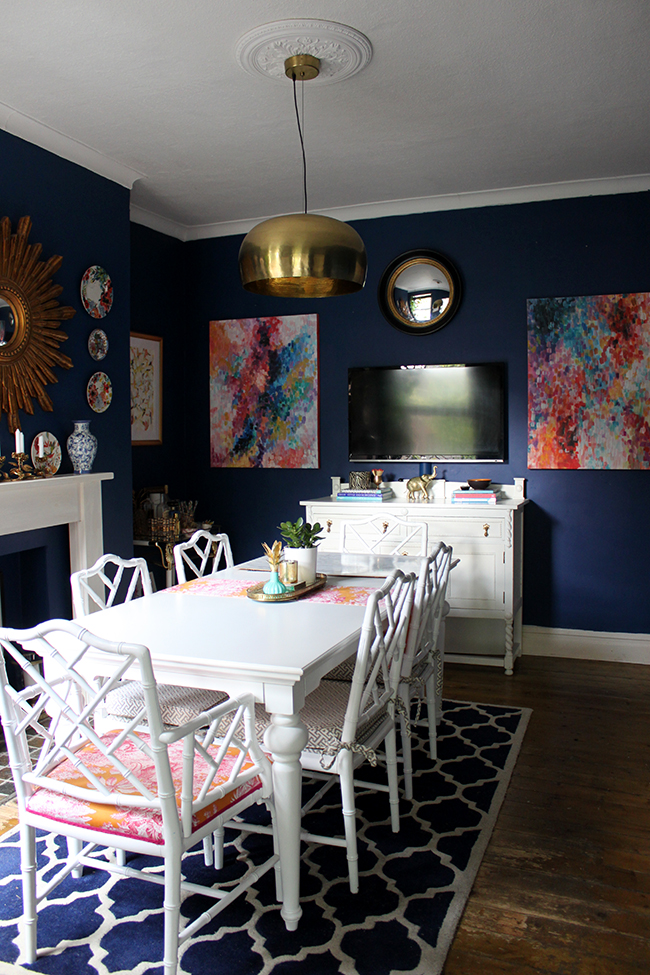 Anyway, the whole process was kind of like shaking off an old relationship that you know is going no where. It just felt good to let it go. Ahhhh.

Genuinely, it’s WEIRD seeing the dining room like this (and if you agree it looks a bit weird, it’s cool, seriously, I know it does – a work in progress!). I’m not used to it yet and it does actually feel really empty without the gallery wall. BUT saying all that, I’m excited because the room is evolving and where it’s going to lead to… well, I guess we’ll just have to wait and see!