First of all, I just wanted to say a massive THANK YOU for the overwhelming response on my One Room Challenge™ . The sheer number of comments, tweets, shares, likes, etc made me completely dizzy and happy and I’m so thrilled so many of you seemed to like it. Big smoochie kisses to you all! I wish I could have an ‘office party’ and invite you all around to party with plastic cups and bad music so you can make inappropriate photocopies of your behinds and hit on your boss. (okay, maybe I need to rethink this idea…) 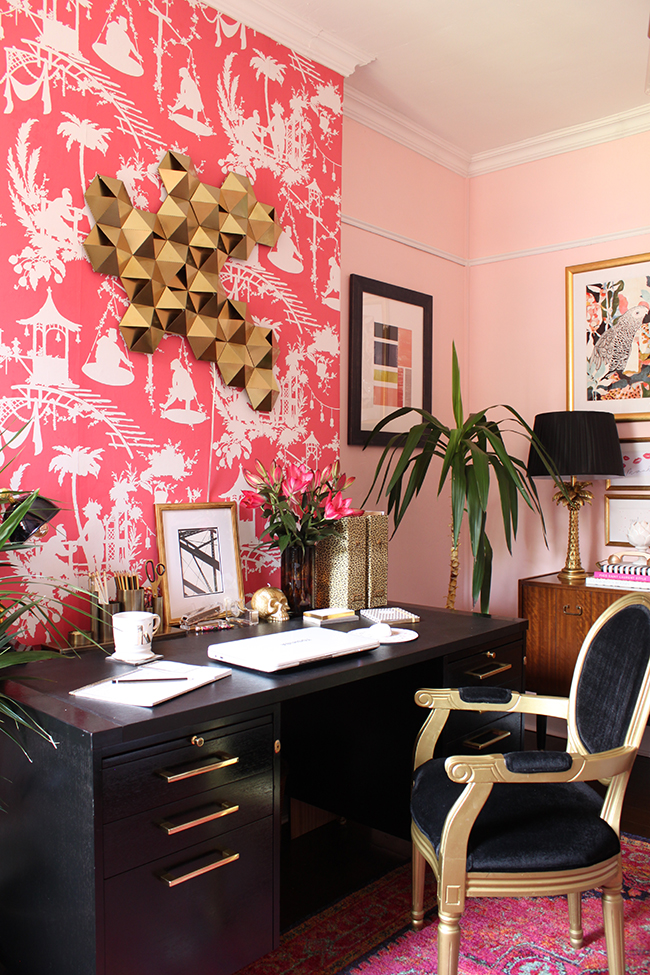 Missed the big reveal of my office remodel? Catch up here.

On Thursday and Friday, I ventured down to London to catch Grand Designs Live and to see a photography exhibition that I’d literally been waiting to see for over 4 years so it’s been a totally crazy week and I couldn’t get a post out on Friday so apologies for my radio silence. More to come on both of those.

I’ll be doing a post on Wednesday about all my sources for the room makeover so please stay tuned for that. I know there were questions in the comments about where certain items were from so all those will be answered for you very soon!

For today, I wanted to share with you the desk makeover. Having so much to talk about this room and having to keep things short and sweet when there were a million things happening made it challenging in itself to keep you updated but I really wanted to show you how simple this makeover really was in case you considered doing something similar. 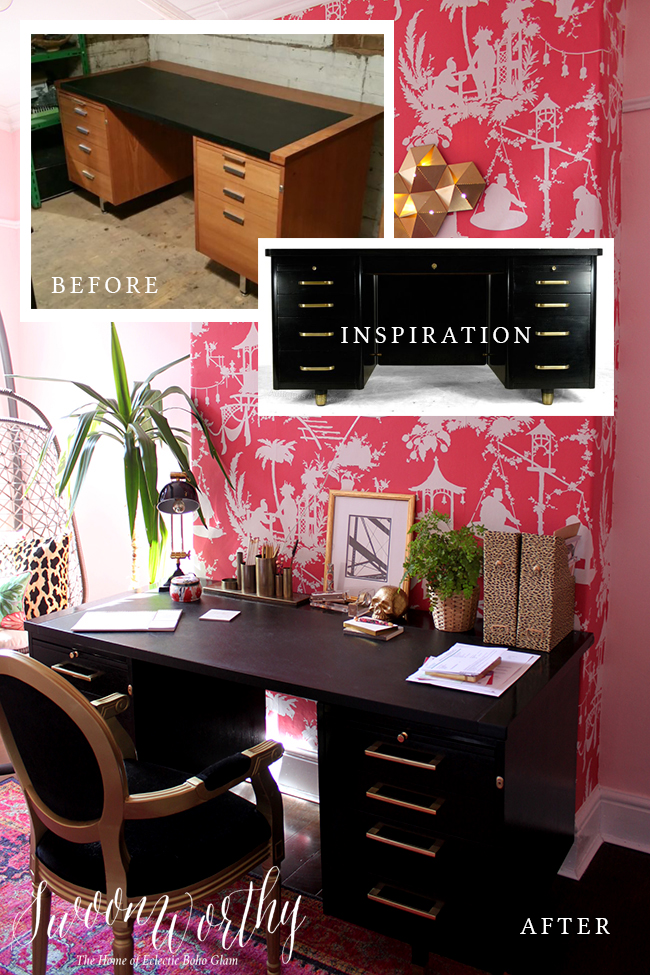 So, as you may recall, I had eyed up this beauty of a desk on an Antiques site and the cost of it was £1500. While it would have been easy to simply plonk down the money, well, first of all, I don’t have £1500 to spend on a desk (nice as that might be) and I knew it wouldn’t be difficult to replicate for a lot less. As it turned out, we were able to do it for less than £200. Win win. 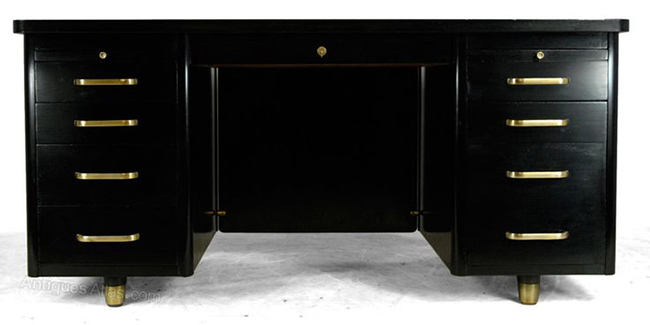 The lines of the desk were actually quite simple so it’s was simply a matter of finding something with a similar shape to duplicate the look of the desk. So when I came across this 1970’s era desk on eBay, I knew it had potential to be my dream desk. It doesn’t look like much but notice how similar the shape and legs were to the original. 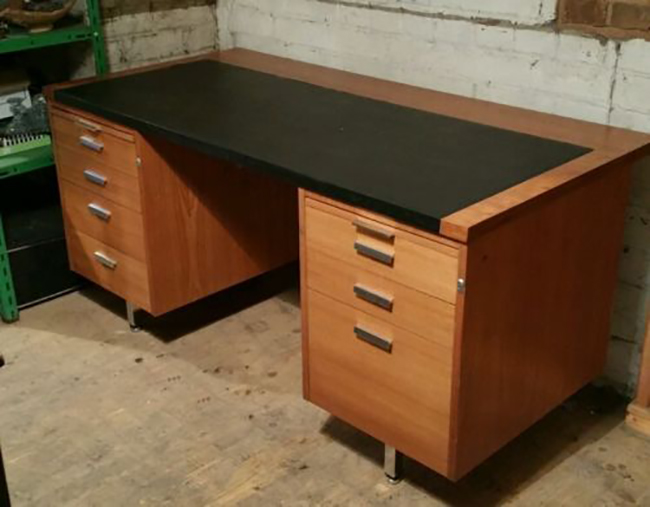 So here’s how we got it looking so pretty.

The whole thing was done in stages simply because we were doing so many things at once so it seemed easier but obviously you could do this over the course of a single weekend. Bear in mind, some of these items were from Wayne’s work but you can get similar online if you do a search.

Here’s what we used…

*denotes afilliliate link – you don’t pay any more but you’ll be contributing a few pennies to Swoon Worthy! Win-win!

And here’s how each piece was sprayed…

And here’s how it progressed…

The two drawer pillars (sans drawers) were completed in Wayne’s body shop (simply because it was easy to transport them to a place where lots of things get sprayed and the weather hadn’t been great to do outdoors). 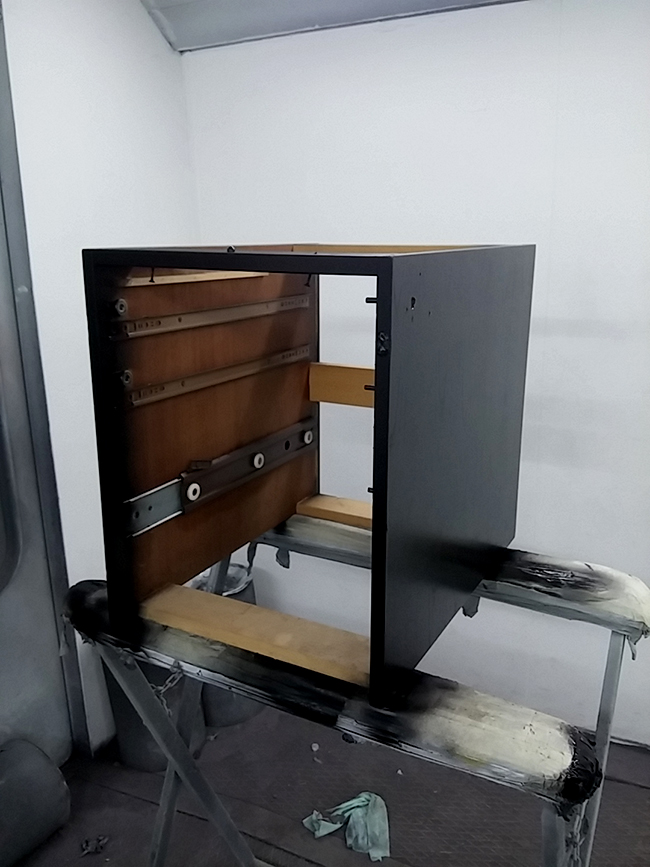 He also sprayed the legs there, imitating the look of the original by spraying it black and then taping it off once dry to cover just the top half and sprayed the bottoms gold with the Montana Gold Gold Chrome. 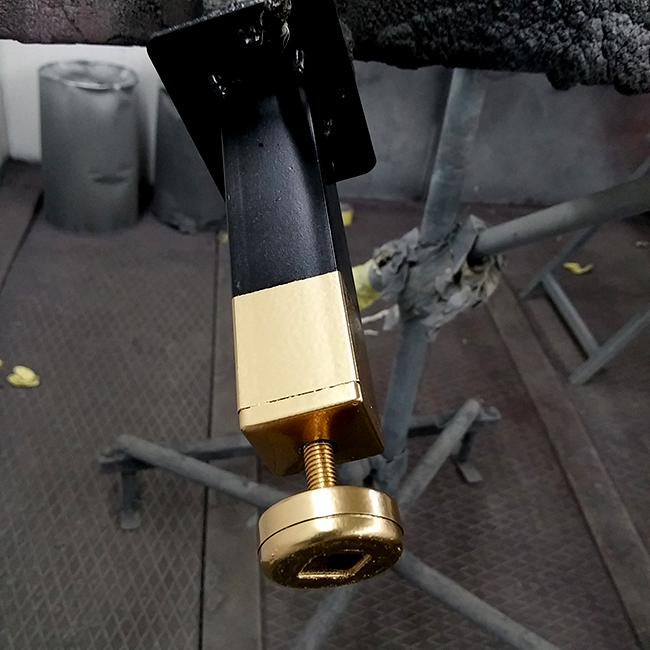 Next, he did the desk top at home simply because we didn’t want to transport such a large top and risk damage. The leather top was covered and taped off before following the steps above to spray it. 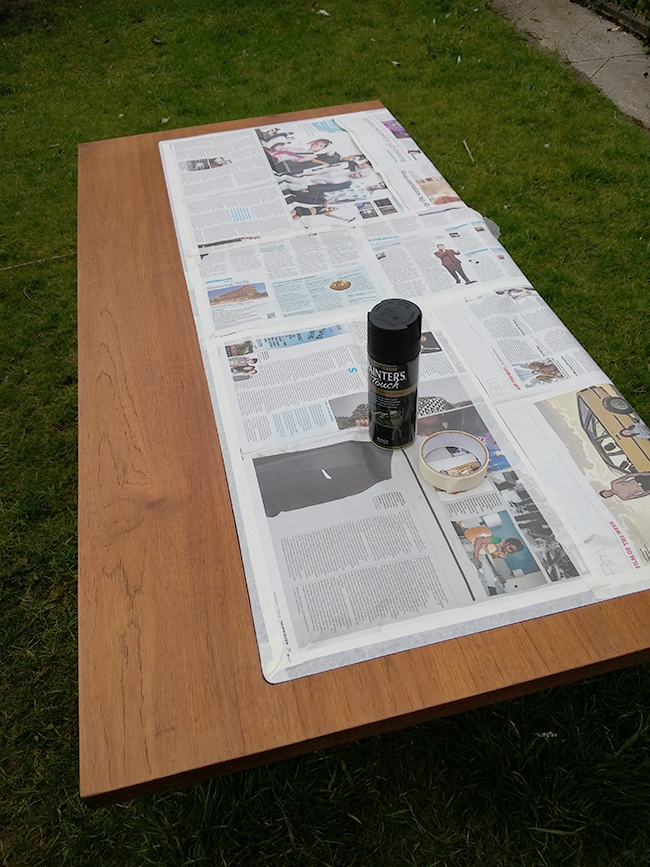 And finally, the drawers were completed the following weekend. We wanted the handles to be at the same height as the old handles but obviously as the new handles were bigger, we measured the location of new handles by using the old holes as a guide… 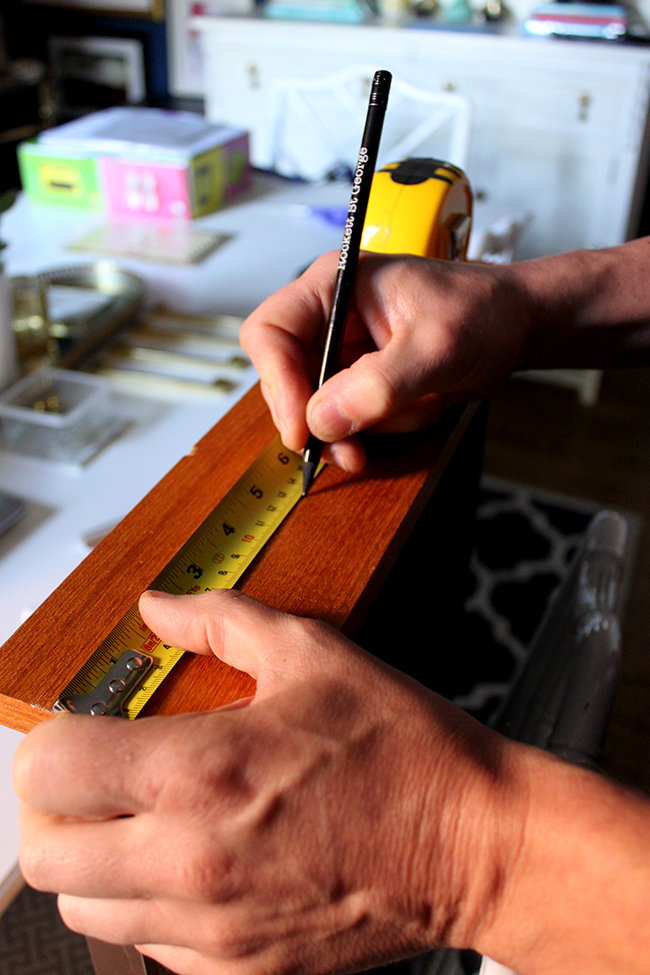 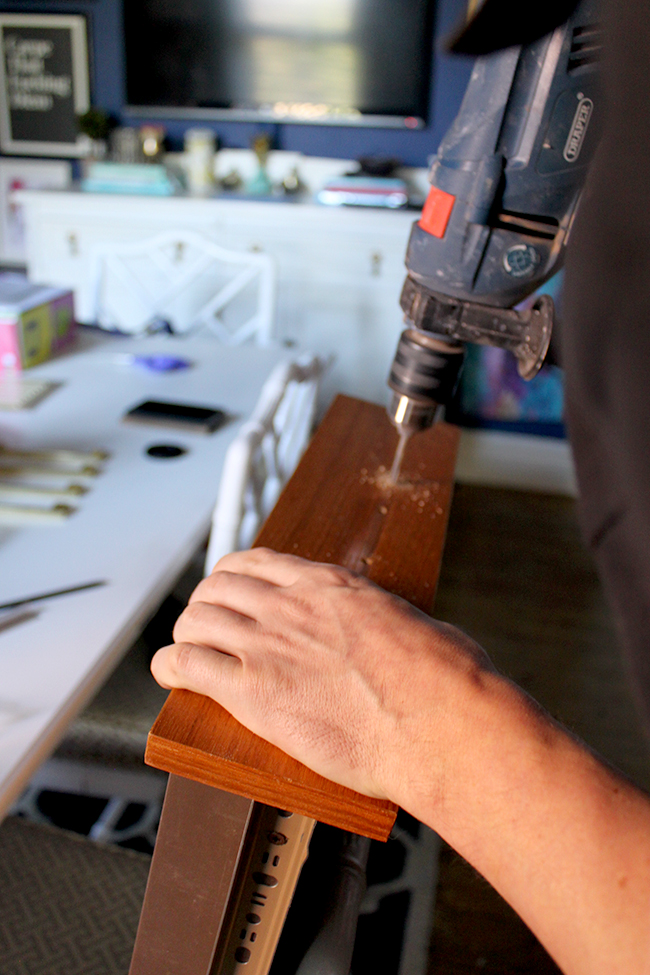 Wayne used car body filler to fill the old hardware holes. Sounds odd, right? It’s actually great for something like this (just don’t use this stuff on walls because it’s porous). Reason it works? You mix the two different ingredients (seen below) which create a chemical reaction. This stuff dries from within (rather than air drying) so it can be refilled and painted very quickly rather than waiting for (air-dry) wood filler and having to do multiple coats to fill it with loads of time in between. 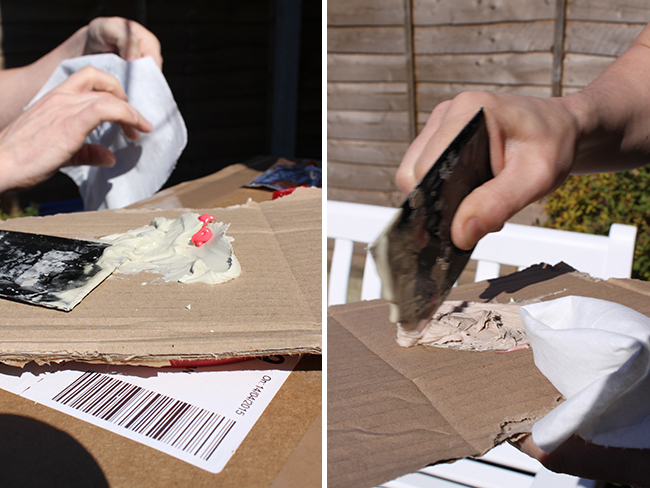 A recommendation – it stinks, so it use outdoors! So with this, we filled the old holes, let them dry and then filled again. Wayne then sanded them down for a totally smooth finish. 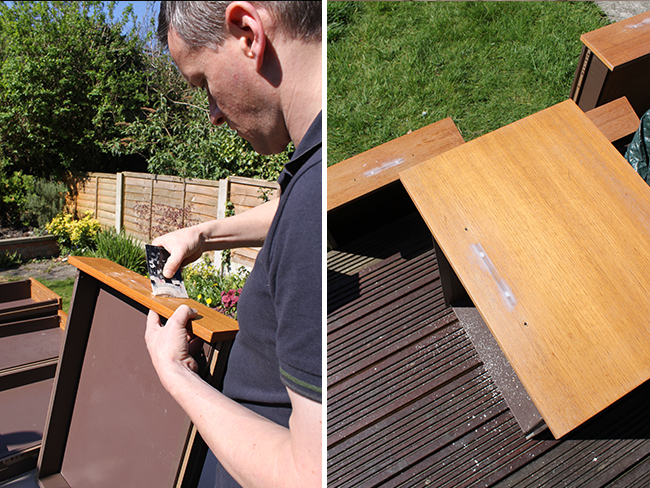 And then of course, they were sprayed as well… (note our new unpainted shed – I have plans for this, stay tuned.) 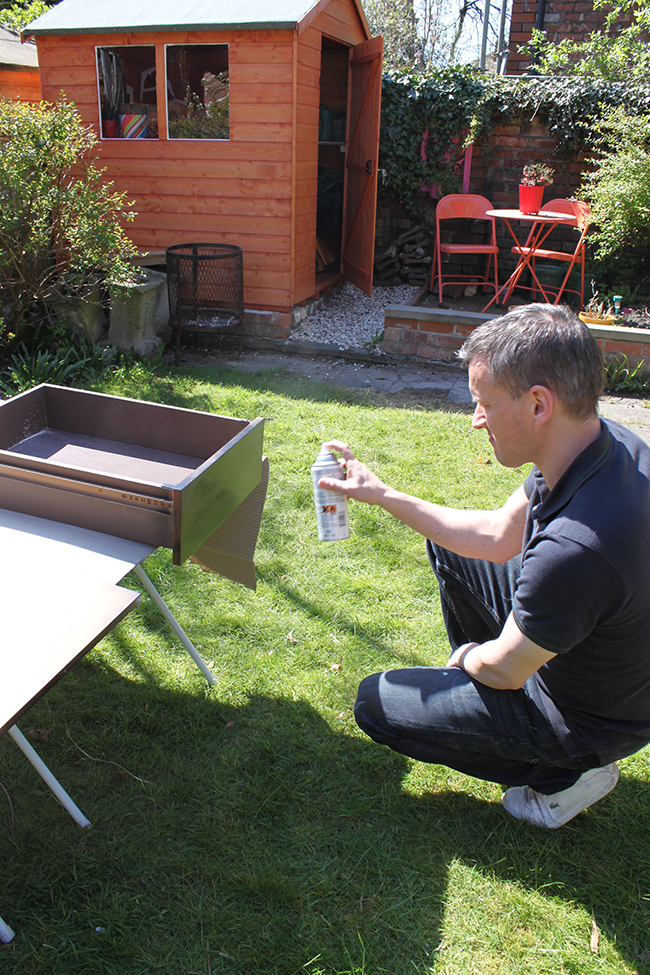 Once the drawers were painted and dry, we put new hardware on and put the desk back together. I really feel that those handles made the biggest difference on this desk and now I’m actually thinking of getting some more for my kitchen cupboards! I just love them – they are so weighty and gorgeous to the touch. 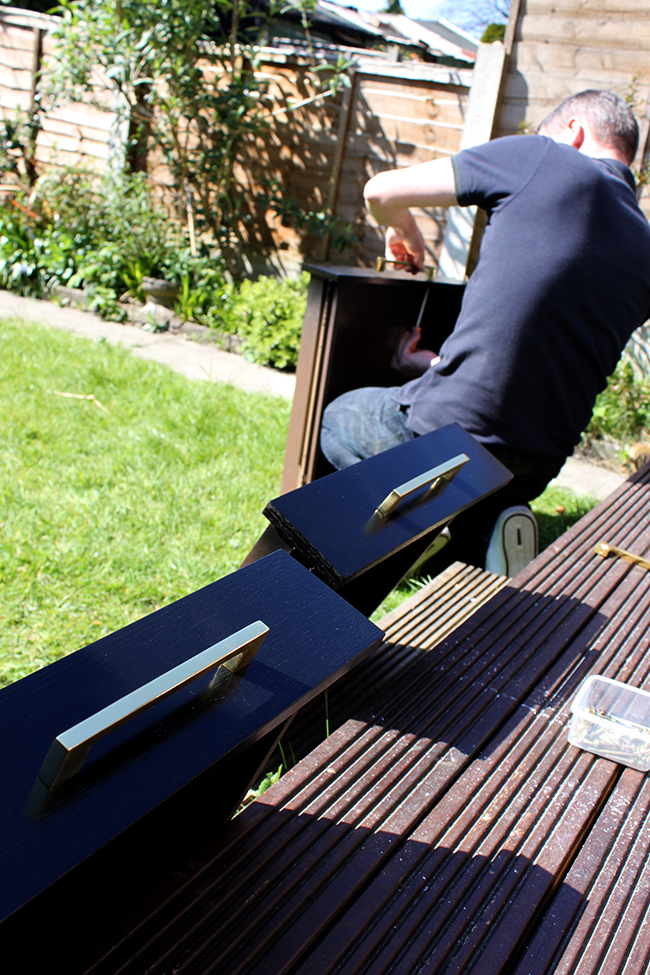 We did talk about adding a back panel as in the inspiration photo but after using the desk for a while without it, I decided to leave it to allow me better access to things like plug sockets underneath and behind the desk. So it was more for convenience than anything else that I didn’t include it. It would be an easy fix (simply spray a piece of MDF and attach) if I ever decide to do that however. 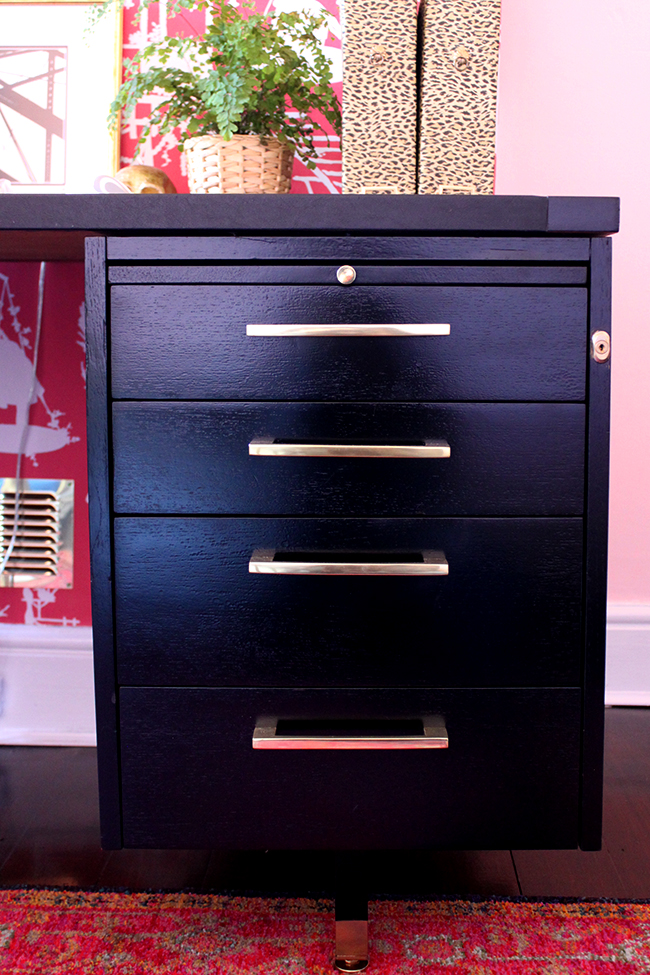 I love how it came out. Of course, I probably could have managed this whole thing myself (and from the steps above, you’ll see it’s actually not that difficult) but having a professional painter in the house and really wanting it to come out perfectly, I left Wayne to do this one for me, understandably! 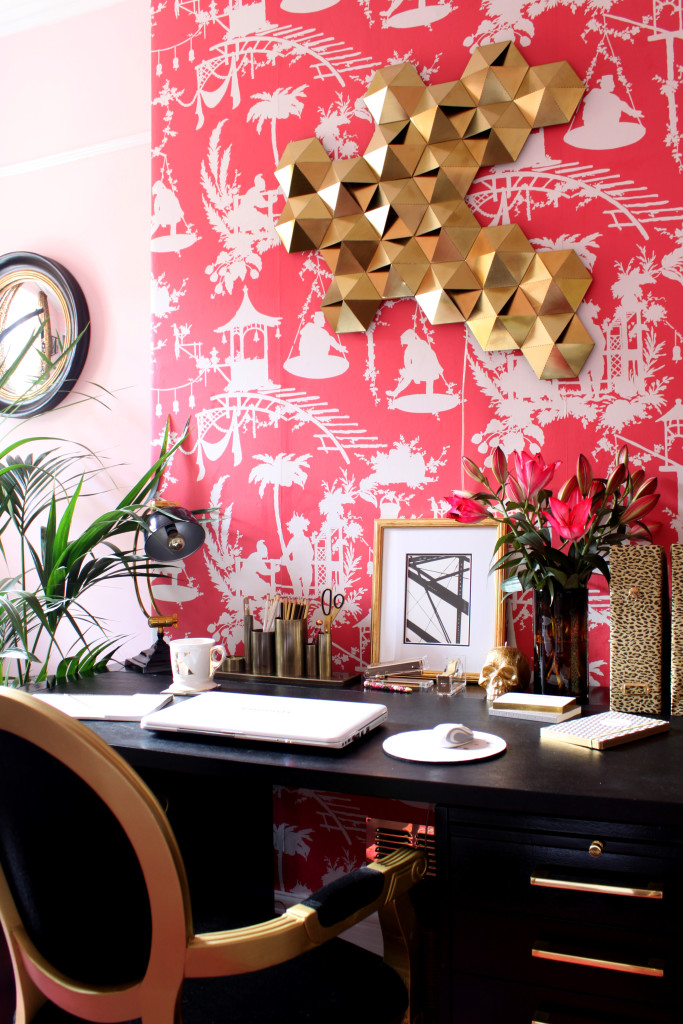 Have you upcycled an old piece of furniture and made it glam recently? Is this something you would try? I’d love to hear from you!