Well my lovelies, did everyone have a nice Easter? I admit, we basically worked all weekend on the office for the One Room Challenge and I have a feeling the next few weeks are going to go by in a blur so if you don’t hear quite as much from me on days other than Wednesday, you’ll know why. There’s just so much work going on, it doesn’t allow me a lot of time to concentrate on other things! Excuses, excuses, I KNOW.

Regardless, I wanted to pop in today because I recently took a bit of a gamble purchasing a pretty inexpensive mid-century modern sideboard from eBay for the office. The listing shots were pretty grim looking but it appeared to have some potential and it was half the price of some of the others I had been pining over so I held my breath and hit ‘buy it now’. Well the risk paid off – it was delivered on Friday and I have fallen hard in love with it. I’ll be sharing that with you as we go through the challenge (sorry no cheating allowed, updates on Wednesdays only!) but in the meantime, I thought it might be nice to look at some inspirational mid-century sideboard styling if only to get my brain engaged about styling my own. 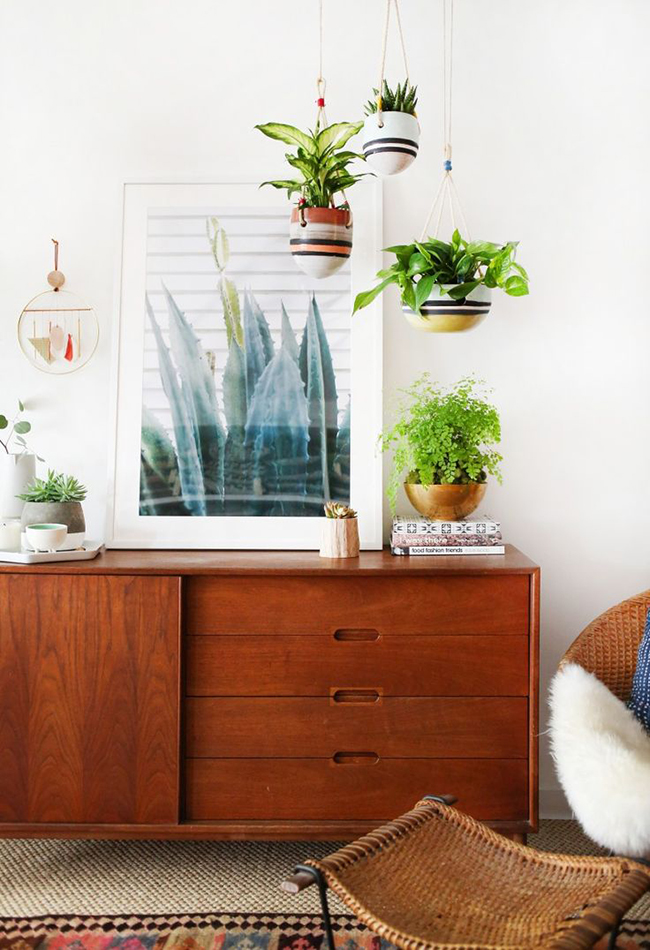 I have to admit, I use the word ‘sideboard’ while I know others may call it a ‘credenza’ and there’s probably a couple that might be considered ‘buffets’ here as well. There are all sorts of explanations in terms of what the correct terms are but let’s just all agree to call them sideboards for the sake of this post, no matter whether they are in the living room or dining room or bedroom or wherever else you want to put them or how long their legs are or whether you are actually putting food on them or just your books and tchotchkes, ad nauseum, okay? 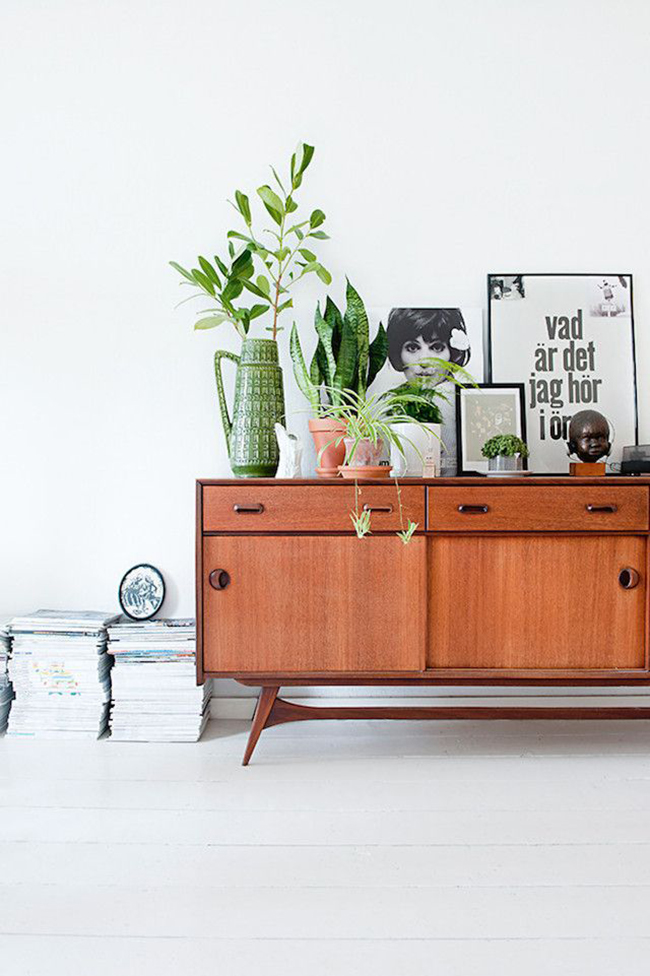 Anyway, plants. Yes. Plants are a must. Or at least some flowers. Something living is always good on any surface really, not just a sideboard but that long area for display just calls out for something green, doesn’t it?

There is also the absolute requirement for art. I mean, in my eyes, you can’t have a big blank wall without something on it (hello, maximalists of the world unite) but I can’t be looking at a big blank boring wall – I want to my senses to be engaged. So art is another thing I’ve got to put on mine. And how cute is Jude Law in this next picture? Awww. 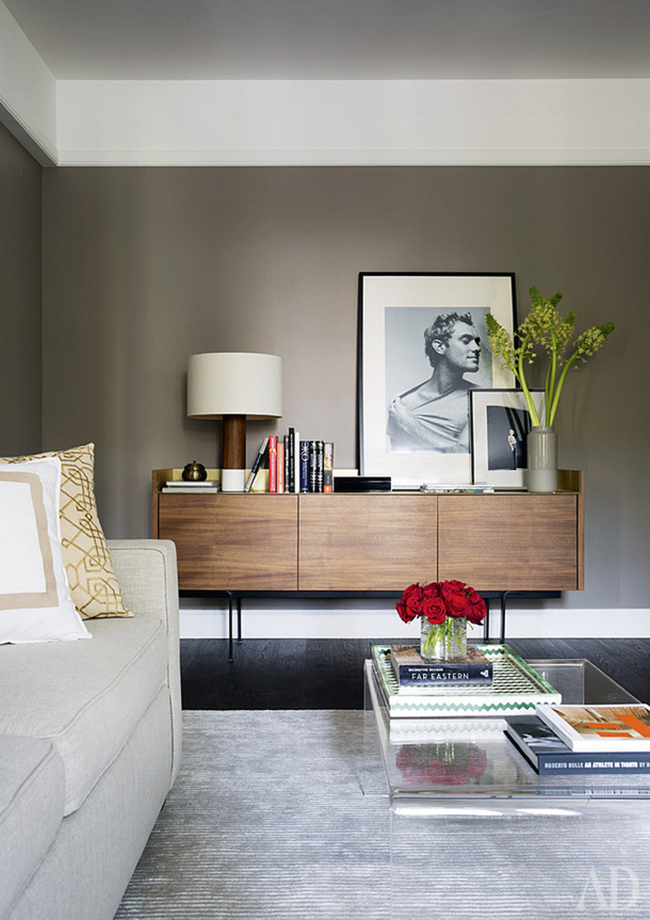 Of course, big art is bad ass so yeah, if you get something really amazing and huge, then definitely it’s a big yes from me. I love how this piece has been majorly glammed up.

I mean, just because it’s mid-century doesn’t mean the entire room around it needs to be rigidly within that time period as well, right? See, that’s the beauty of eclecticism – instead of having a home that looks like a homage to a certain period of time, mixing styles immediately makes it look more timeless. So of course, in my room, I’ll be doing a lot of that!

Speaking of rule breaking, it doesn’t have to be art above the sideboard to style it – why not a rug? Yeah why NOT a rug? Looks cool, doesn’t it? 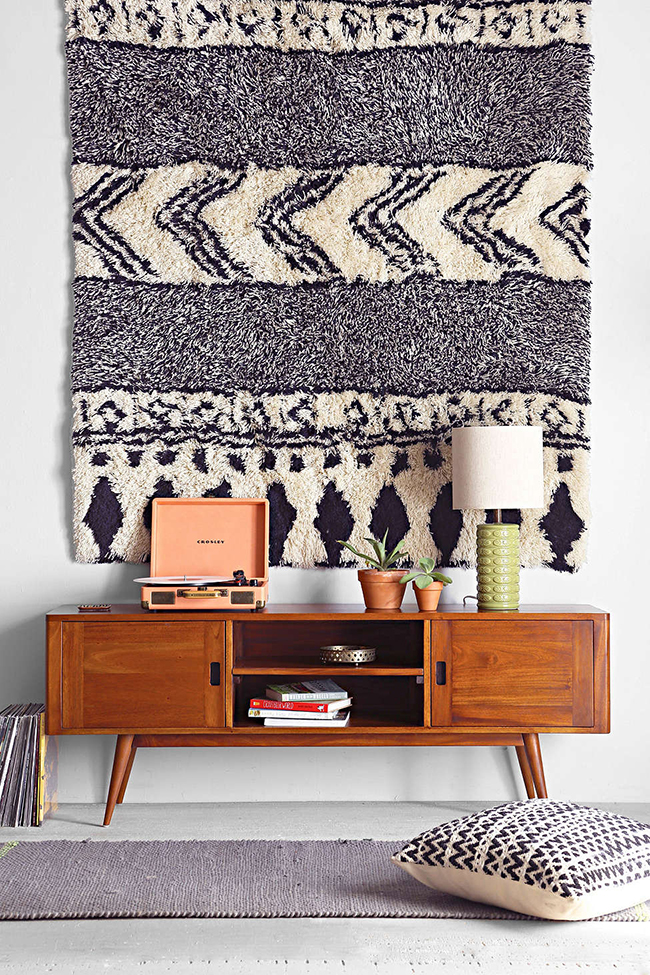 Now, I’m including this next one because we’ve got a TV above our sideboard in the dining room as unusual as that may be and while this is not the plan in the office of course, it’s worth showing the way to style it right. 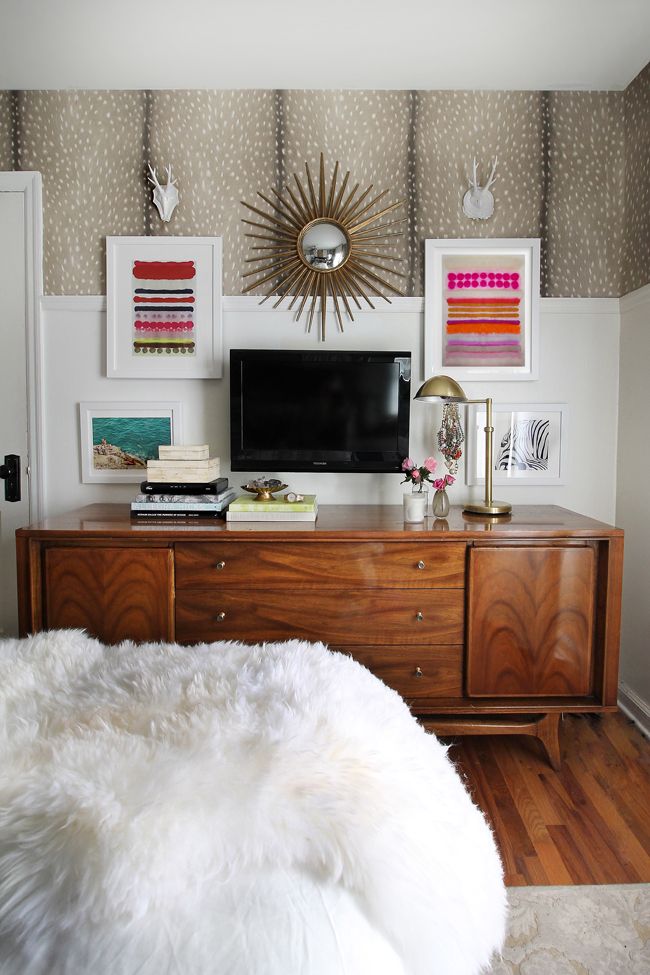 And finally, I wanted to include this one because the colours are awesome. And that’s really the only thing I wanted to say about that. I mean, there’s a lot of mid-century going on here (which like I said, I prefer to stay away from otherwise it ends up looking like a time capsule) but that dark wall and yellow seat are just all kinds of yes in my eyes. 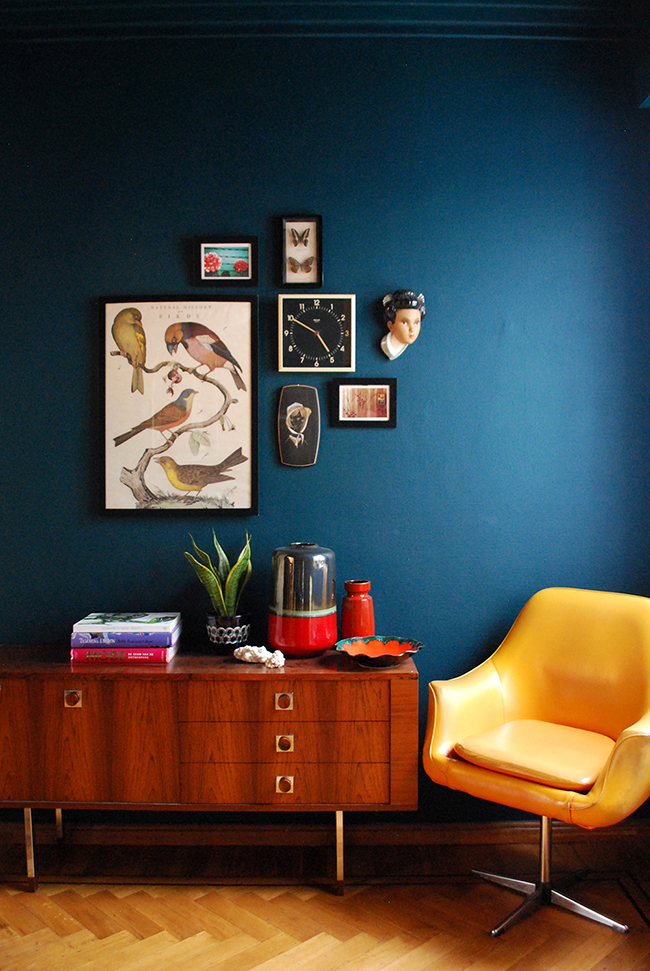 So tell me, do you have a mid century sideboard in your home and if so, how do you style yours?