So I have seen a few bloggers taking part in this little series and as I was tagged by my friend Carole of Mademoiselle Poirot, I figured I’d have a go because I’ve really enjoyed learning more about my favourite bloggers. So perhaps you’ll enjoy getting to know me a little better too.

It’s funny writing something like this – it’s so much easier and yet so much harder than you think it will be. I hope you don’t all hate me by the end of it ;) 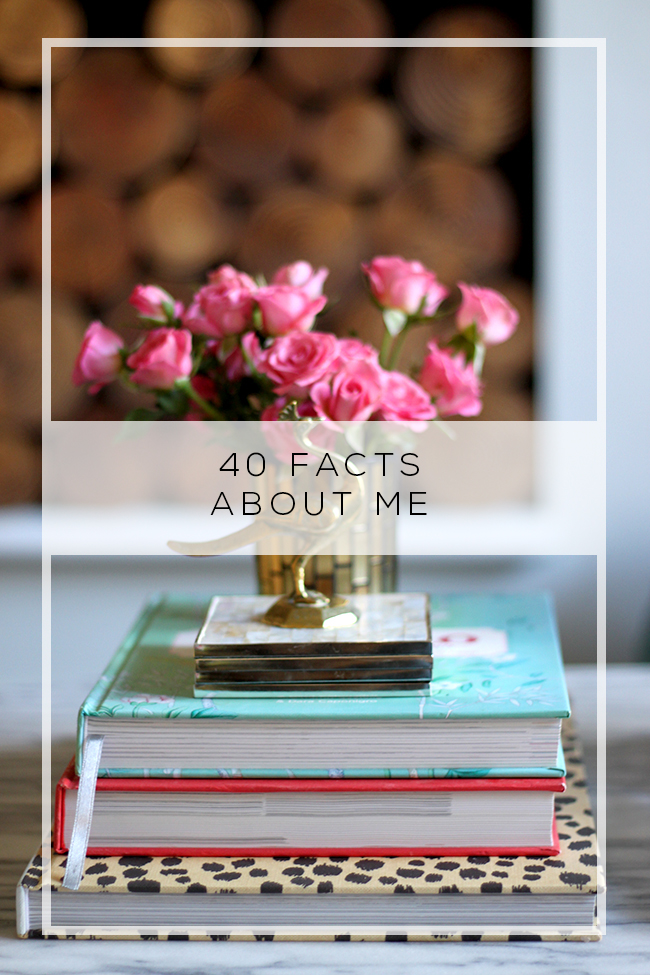 On every online test for right brain/left brain, I always come out exactly even. I’m very creative but very logical too.

I used to write books of funny poetry for my friends when I was a kid.

As a child, I wanted to be an architect when I grew up.

I was called an ‘art fag’ in High School. (I’m straight, I just took a lot of art courses and High School kids can be assholes.)

The first room I ever completely planned and designed myself was my bedroom at 14 years old. It had a white Battenburg lace coverlet with hand painted roses, a white crocheted canopy and I painted the room in burgundy and tan with a gold braid trim as a chair rail around the room and hung gold framed pictures of Greek Goddess statues.

I will judge a person immediately on their humour. If they can laugh at themselves, I usually like them.

As much as I like working in my garden, I hate bugs – the more legs, the more they scare me.

I was married and divorced twice before the age of 30. I don’t regret either of them. I made choices that felt right at the time and followed my heart.

I was born to Puerto Rican parents who spoke Spanish as their first language. I was only spoken to in English growing up so I never learned to speak Spanish fluently. Someday I’d like to learn it properly so I don’t have to keep saying ‘Lo siento, no hablo espanol’ to every waiter in Spain who assumes I speak the language because I look Hispanic.

Due to choices I have made in my life that were different from what my parents wanted, I have a very strained relationship with them now. It took me a while to be okay with this but I’m fine about it now.

I moved a lot in my 20’s, always looking for something new. I craved change all the time – it made me feel alive. As a result of this, I’ve moved a LOT. 20 different places over 20 years including 4 States and 2 countries.

I once drove a very large moving truck with my car towed on the back for over 900 miles alone. It was scary but I was proud of myself at the end of it. And utterly exhausted.

I moved to a small town in Wisconsin when I was 28 without knowing anyone because I needed a clean slate. It was one of the best things I’ve ever done. I think the people in that small town (Appleton) were some of the nicest, warmest, most genuine and friendliest people I’ve ever met anywhere.

I used to write a lot of poetry. I think I fancied myself the next Sylvia Plath. Some of it I’m proud of, some of it is terrible but I’m glad I kept it all these years.

I smoked cigarettes for 10 years. I’m happy I don’t smoke them any more although on the odd summer day in a sunny beer garden, I have the odd craving. I’ve not given in to that craving for more than 2 years.

I used to be a total extrovert but I’m much more introverted now. I prefer to go to lunch with one or two people and spend quality time with them than spend that time with 20 people at a party and leave feeling like I haven’t really connected with anyone.

When I moved to England, I felt like I was always meant to be here.

English people have the best sense of humour – dry, self-deprecating and so so witty. I’m often in awe of how funny people can be. I think a great sense of humour is often a sign of intelligence.

I’m a bit of a potty mouth but I’ll only swear in front of people I’m comfortable around and know aren’t offended easily.

I still get a little soppy when I see pictures of the trees in Autumn in Pennsylvania, where I grew up. It’s really beautiful there at that time of year.

The only time I’ve ever lived in the middle of a city was in Denver, Colorado when I was in my early 20s. I lived with 5 other girls and it was always messy. I moved back home after 8 months because I missed the rain.

I lived in LA for 3 months in the 90’s. I was given a little white pick up truck as a company car and loved that truck but I really hated LA.

I always said if a film was made about my life, I wanted Helena Bonham Carter to play me.

I consider myself a “townie” – as much as I would love the idea of living in the middle of the countryside, I know the novelty of being somewhere so remote would eventually drive me batty.

Some of my closest friends are gay. I think everyone has a right to love who they want and there shouldn’t be judgement from anyone on how they share that love with someone else.

Racism makes me angry even though I realise a lot of it comes from ignorance. We are all the same underneath the colour of our skin.

I call myself a feminist despite the bad connotations that sometimes has. I’m proud of this because I truly believe women have been given a shit deal over the years and it’s about time we made a bit of noise about it so I wear that badge with pride. This doesn’t mean I hate men. I have had amazing friendships with plenty of them.

I am a big softie. I will cry if something really touches me (even an advert which is really embarrassing).

I love new music and have always tried to keep up to date with new indie bands even though I’m probably far too old for that stuff now.

Give me a female singer songwriter with a jangly guitar or a piano and I’ll probably like it.

I prefer white wine to anything else. Half a glass of red wine will give me an immediate headache.

I hate the feeling of being really stuffed after a big meal.

I’m very tidy but I’m a messy cook. Wayne often bemoans the ‘utter devastation’ I cause when I make a meal.

I use a Puerto Rican spice called ‘Adobo’ with pretty much everything – eggs, meat, fish, pasta – you name it, I’ll put Adobo on it. It’s difficult to get in the UK so I stock up when I can. I think I have 6 bottles of it right now so I’m not in danger of running out any time soon.

I stopped eating processed sugar in November and I’ve never felt better. I sleep better and my energy levels are consistent all day.

I do my best writing and feel the most creative first thing in the morning.

I drive a yellow Mini with a black and white chequered roof. I call it my “English New York Taxi”.

My wardrobe is just as colourful and patterned as my home.

I have a tattoo of a butterfly on my lower back. It’s totally clichéd but I don’t regret it.

I have an eyebrow piercing which I’ve had since 1999. It’s just part of my face now and I often forget I have it. I often contemplate getting another tattoo and another piercing but never seem to follow through with it.

So those are my 40 facts!! Whew! Thanks for reading all that and I hope you enjoyed reading it as much as I enjoyed writing it all down (it was actually strangely cathartic). Fancy joining in?