You may remember me talking about VOGA late last year – they are a company that produce replicated design classics in a really considered way. I spoke about my thoughts on mid-century designs that are legally replicated in a way that honours rather than ‘steals’ the original designer’s work and there was a rather wonderful discussion that ensued in both the comments of the post as well as on both Facebook and Twitter. It was great hearing everyone’s take on it and I really appreciate that the conversation was handled in a mature, respectful fashion. It’s absolutely okay to disagree with me on this subject matter – it’s a weighty topic and I don’t believe there’s really one clear cut answer.

However, as I said in that post, I’ve been working with VOGA and they were kind enough to allow me to try one of their products for review. I chose the Serge Mouille MCL-R6 ceiling light – it’s a design that I’ve loved in so many spaces I’ve seen around the web for the way it’s sexy long arms stretch around a space, adding a rock n’ roll edge when paired with more ornate designs. I thought it would be absolutely perfect – if a little bit mad – in my black bedroom. 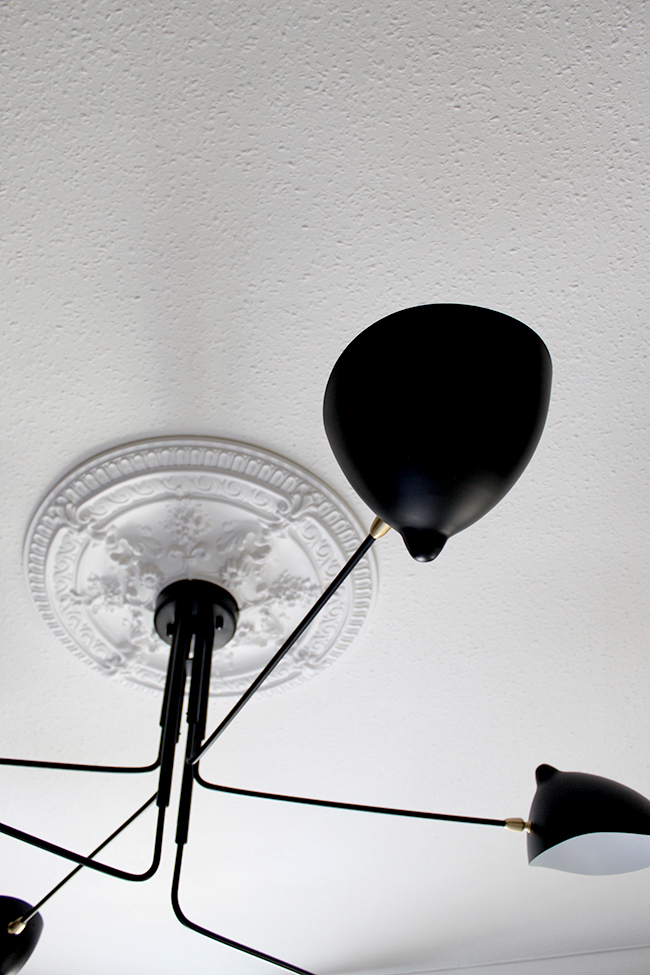 I wanted the light’s modern masculinity to contrast against our ceiling so I chose a rather large ornate Victorian ceiling rose to pair with it. That juxtaposition between modern design and ornate classical design just works SO well. It’s a contrast that I love about Christine Dovey’s work and one I wanted to capture in here. 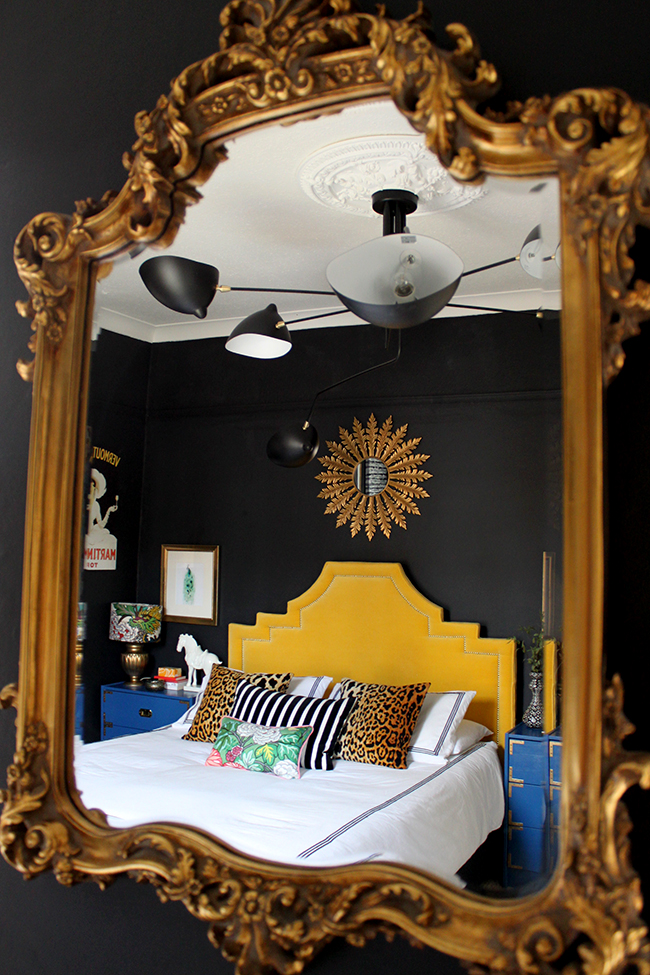 The light itself is stunning. It’s really well made and looks ‘the part’ – it’s heavy but not ridiculously so and the smooth matt finish is perfectly contrasted with those small brass bolts that meet the sculptural heads. 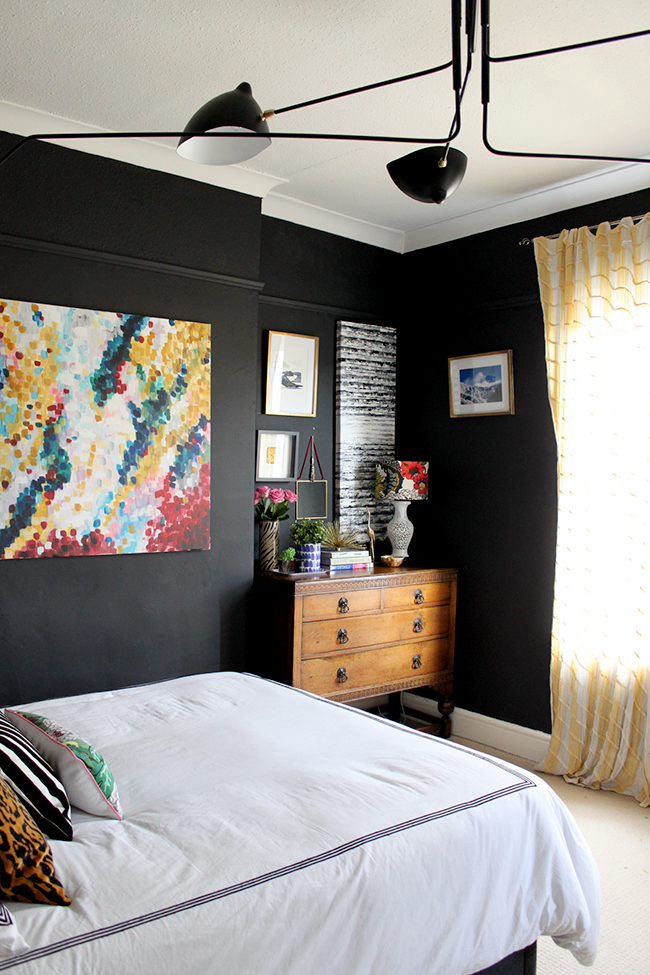 At night, the light it gives off in the room is amazing – it really illuminates the entire space and turning a few heads towards the ceiling washes that light over everything. We have it on a dimmer so reducing it to a subtle glow makes the room look even cosier than it did before.

The only problem (and one that I entirely take the blame for) is that I feel it might be just a bit *too* big for the room. I was keen on having an oversized light fitting in here – if there’s one way to add drama to a room, it’s by choosing something slightly over large to really make an impact. But I may just have gone a bit too big in this instance! 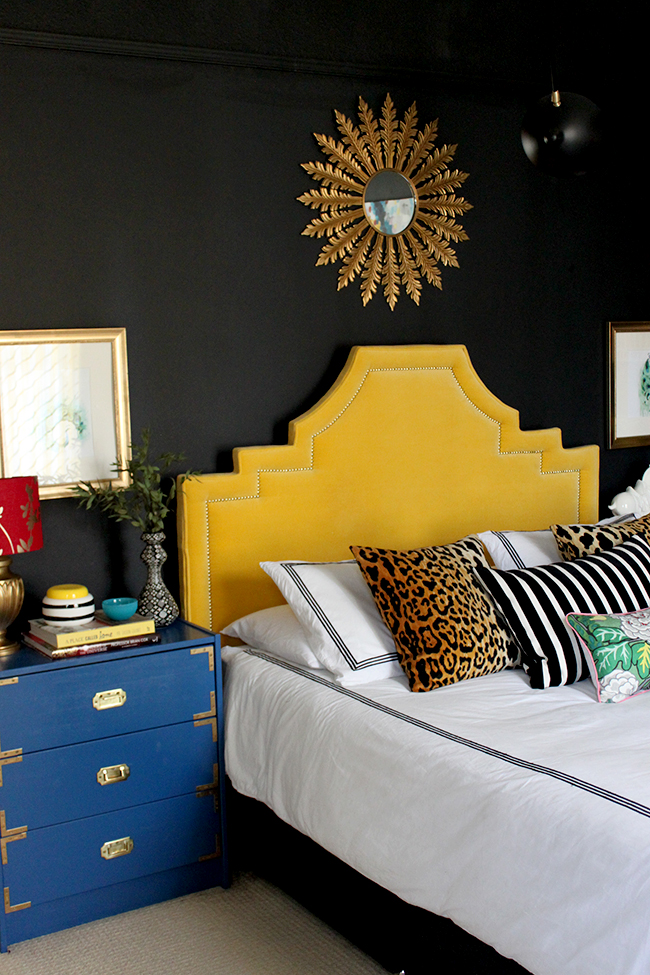 I’m going to live with it as it is for a week or so – it may be that I’m simply not used to seeing it in the space (we only put it up on Saturday so that’s yesterday as I write the post). It’s always good to live with things for a little while to give you time to develop a more ‘objective’ opinion. If at the end of that time, I still feel it’s a bit too big, then we might make some adjustments to it (possibly swapping the lower arms with a couple of the higher ones to move them closer to the ceiling, possibly shortening the longest arms or bending the arms with a pipe bender to a 45 degree angle rather than a 90 degree angle so they sit closer to the ceiling, possibly removing those longest arms altogether) – and ya know… I actually feel terrible just typing that out because the light as it is really is beautiful. 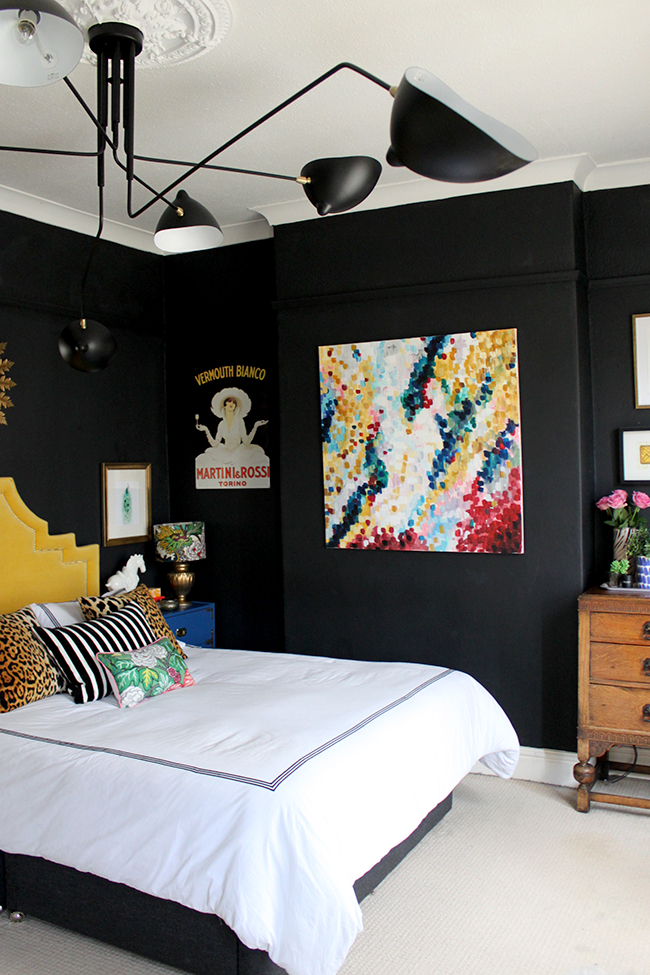 However, everything you put into your home should work for the way that you live and while I would love to have 12 foot high ceilings to make this work, that’s probably not going to happen any time soon! Again, this is my own fault and one I fully take the blame for – I should have measured more carefully but I was so caught up in having this gorgeous light that obviously practicalities went out the window! LOL! 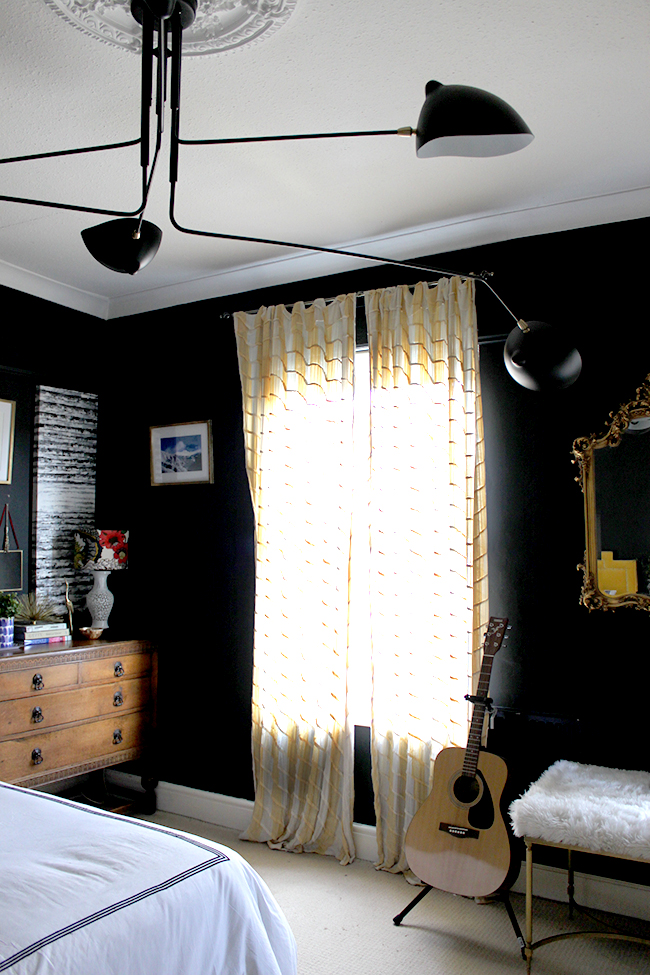 Don’t get me wrong – by British standards, this isn’t a tiny room by any means (in fact, it’s the largest room in our home at  4.4 metres x 3.6 metres or 14ft 6 in x 11 ft 10in) – but if I were to do it again, I’d choose the 3 arm design that VOGA also sells at a mere £169. It’s slightly smaller although it still gives that amazing Serge Mouille impact that I love so much about this light. If you have a much larger space, however, or one with say, 12 foot ceilings, then absolutely go for the larger version – it’s beautiful and sculptural and will really add impact to a space, no matter what your style. 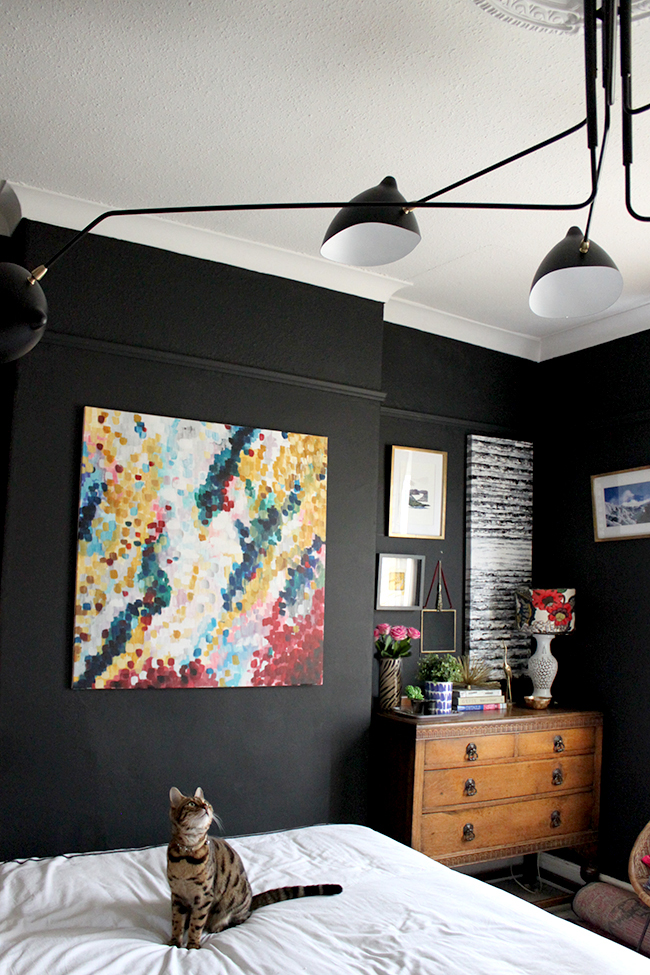 And I would highly recommend going to VOGA – my experience with them has been fantastic and as I spoke about in my last post, I love their ethos – that good design should be for everyone, not just the elite and exactly what these mid-century designs were all about. Have a look at their best sellers to get an idea of the kinds of gorgeous designs that they sell at incredibly reasonable prices. The quality is exceptional and I feel they really honour the work of the original designers. I’d certainly be happy to buy from them in the future. 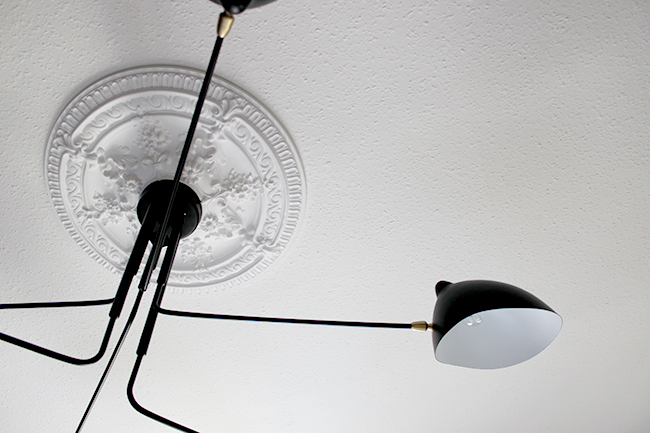 I totally realise this is a really ‘out there’ kind of a light fitting and most likely not to everyone’s tastes – and I’m actually NERVOUS asking this because I recognise the scale isn’t quite right – but I’m pulling up my big girl pants and asking anyway – what do you think of the new light fitting? Is it something you would bring into your own home? Or tell me… have you got something home and realise with horror that it’s not quite the right size? Or is that just me?!

Disclaimer: The Serge Mouille MCL-R6 was provided to me free from VOGA for my review but all words, images and opinions are of course my very own. I only share products that I like and think you’ll like too on Swoon Worthy.