This is a hella long post and for that I’ll apologise. You see, as I’ve said in my 2015 goals post, my kitchen has been neglected for quite some time and so the list of things to do is just getting ridiculously long – but you’ll be happy that some decisions have been made. BOOM. So here’s where we are in the proceedings… (aside from fighting Meisha whilst taking pictures to STAY OFF THE COUNTERTOPS. Gah.) 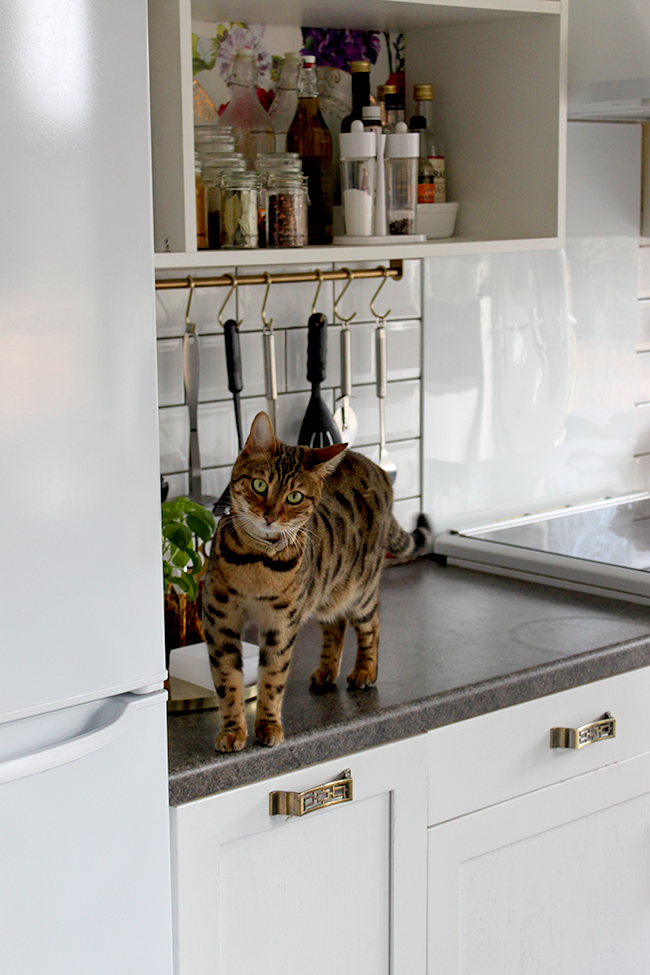 As promised on Monday, we finally replaced the stainless steel cookerhood* and splashback. Once we went white with all of our appliances, the stainless steel just wasn’t working for me any more and then one day last week, I’d realised I’d had enough.

I went on my trusty old employer AO’s website, ordered this rather lovely Hotpoint number and it was delivered with no fuss the following day. (And, if you are wondering, nope, I didn’t get it free nor did I get a discount and despite the fact that I’m no longer in their employ besides being a contributor, I just think they are a good company for appliances – and that’s saying something right? My honest unsolicited opinion and recommendation right there.)

Here’s what it looked like installed (and with the old splashback removed, obvs)… 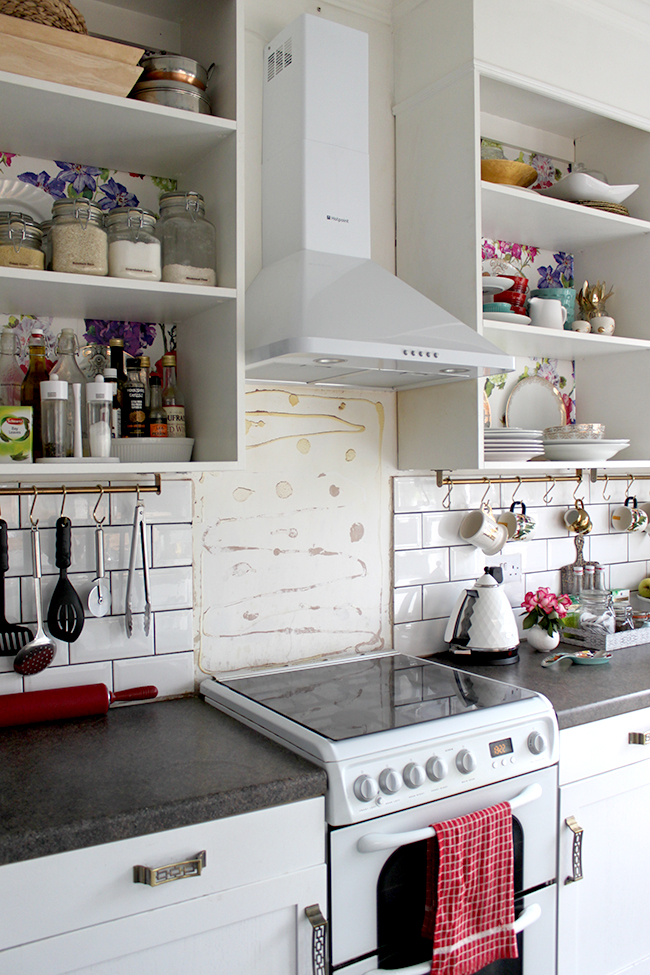 As for the backsplash, that was another matter entirely. I had initially been considering getting it brass plated. And then I thought about covering it with brass sheet. Both these options were pretty expensive and then I considered getting it sprayed in gold paint… But when we pulled it off the wall and I realised something. That the white wall hidden underneath (despite being covered in glue) kind of worked – I mean, not in the state it was in clearly – but I did like the lightness it brought to the kitchen.

And so I did a few mockups on Photoshop to see if I could make a decision. And both Wayne and I agreed that it would look best if the subway tile just continued across that wall. It wasn’t just the cheapest option, it also made sense visually. Here’s my really shitty mockup but hopefully you get the idea! 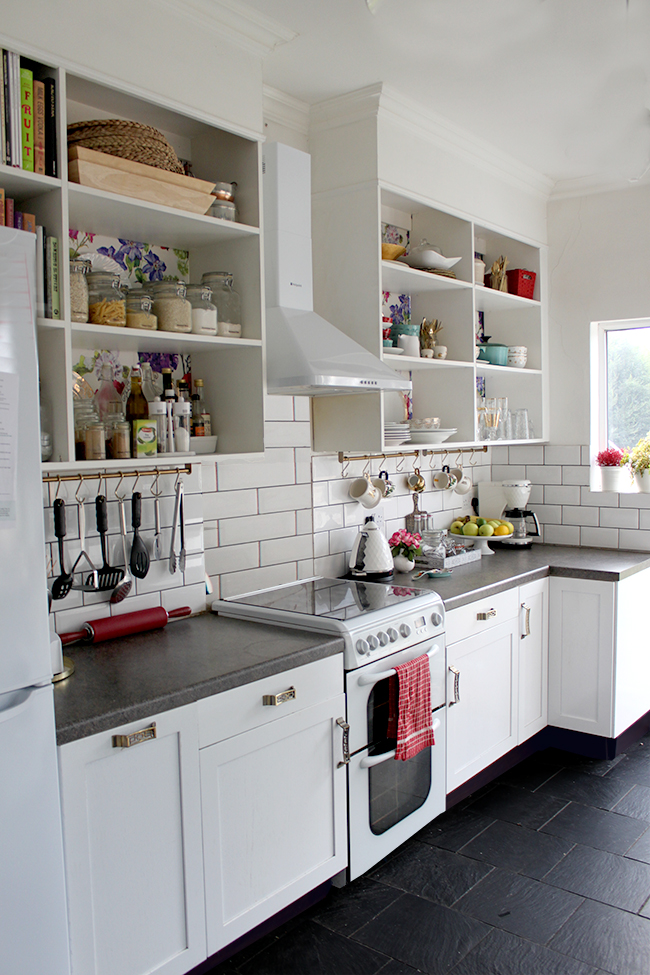 So this is what we intend to do (more tiling work – whoop! /sarcasm/).

However… knowing that we won’t be able to do the tiling work in this room for a little while (at least until we make a bit more headway on the guest bedroom/office remodel), we decided to take the stainless steel splash back and paint it white. Wayne took it to work and sprayed it with car paint (it actually took two attempts to get the exact white of the appliances) but et voilà! 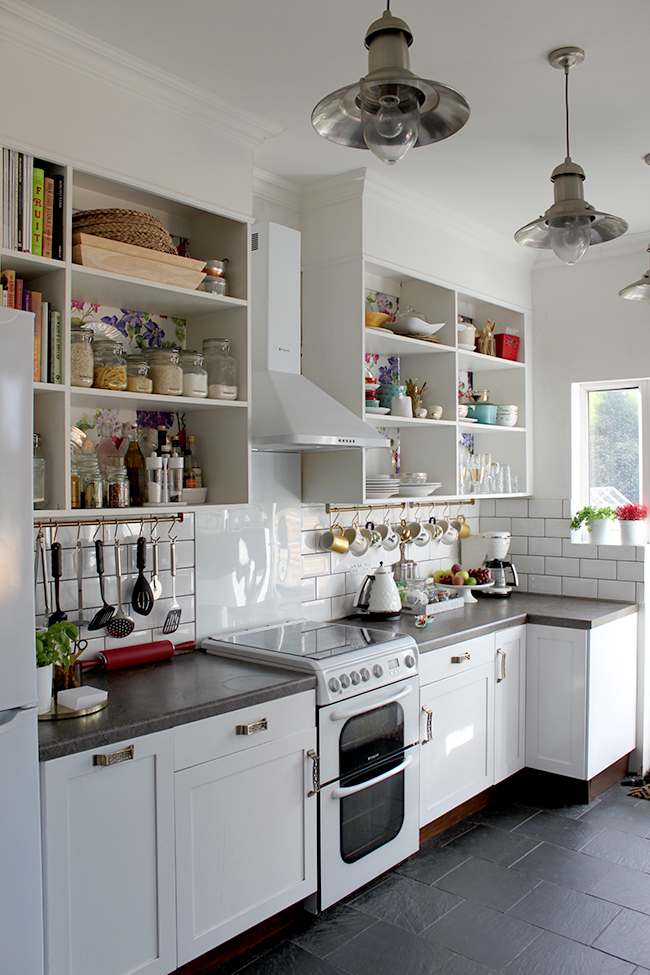 At least for now, it looks a lot better and matches with the cooker hood and cooker so it’ll do for the time being until we can get the tiling done. 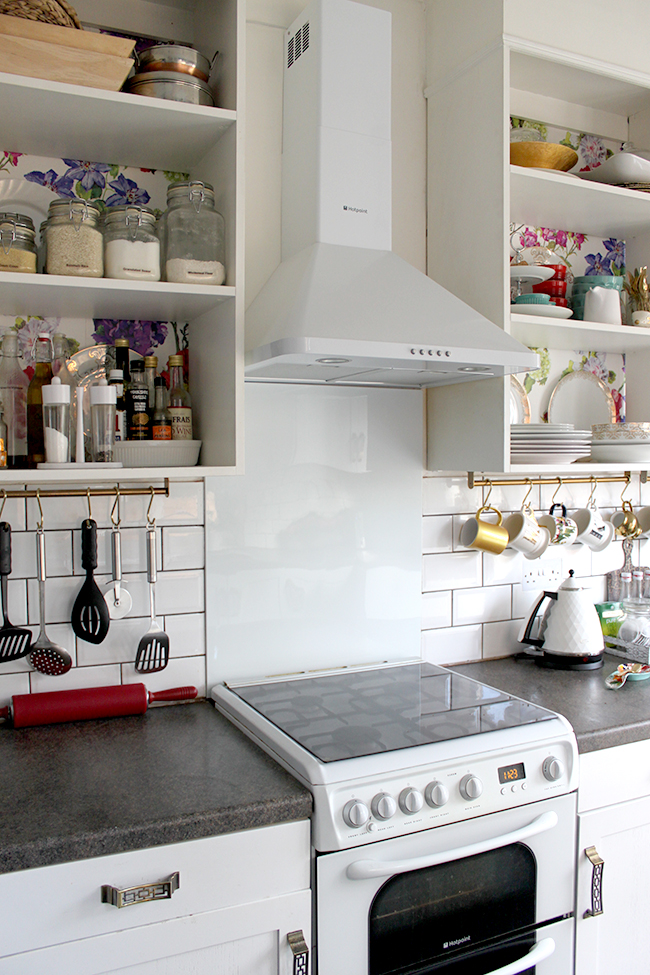 For those of you wondering about grease and cooking splatters, our cooker has a glass cover that lifts up when you use the hob* so the secondary splash back is a bit unnecessary – thus the reason I want to just continue the tiles – uninterrupted – behind it.

*Translation for my North American brethren: cooker= oven / cooker hood = extractor / hob = stove  (I have always loved how literal the English are in their language. Isn’t ‘cooker’ just a really cute word?) 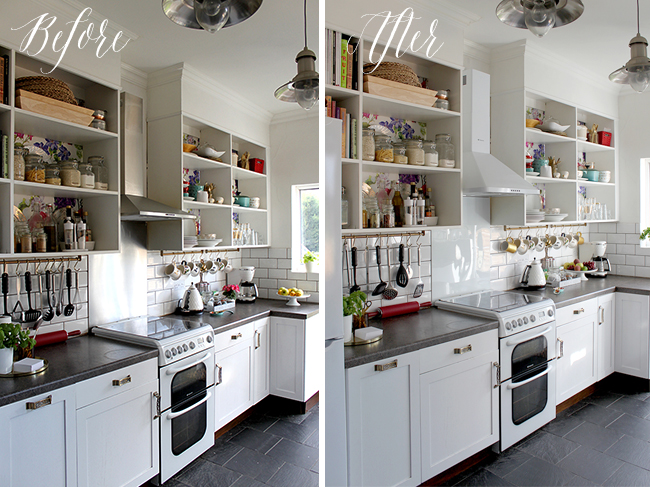 I know it’s a little difficult to tell on the splashback as there’s a glare on the stainless steel in the image on the left but it’s certainly brighter, right?

So, aside from eventually tiling behind the cooker and finally getting around to ridding myself of the stainless steel cooker hood/splash back situation (hurrah!), what else do I have planned that I haven’t yet mentioned?

Oh yes, the countertops. Goodness, this has been going for a VERY long time. Long ago, it was going to be butcherblock and then I decided I really loved the look of Cararra Marble so alternatives were considered both in quartz and quartzite and then it morphed back into just REALLY wanting Cararra Marble but considering a Formica laminate look-alike. And ya know what? After all of that indecision, I still want that f*cking marble.

I have to remember something – we will not be in this house forever. And marble is a massive investment for us. And it’s not even all that practical (although I decided I was willing to live with the inevitable scratching and etching that came with it). If I could afford it, I’ll be honest – I would do it in a heartbeat. But we have other projects in the house to get to and I fear we’d be saving for another year before I’d even see Carrara in this kitchen. And then how long would I get to enjoy that beautiful marble before we moved out? *sigh* You understand why I’ve been paralysed with indecision all this time, right?

So it’s come down to this: I’ve decided that at a risk of only a few hundred pounds, it’s worth trying out the Formica marble look-alike. Yep, I’m going to replace laminate with laminate. I know, that’s crazy right? But from what I’ve seen, it looks good, it’s cheap, it’s hard-wearing and to tell you the truth, the laminate we have now is fine – I just don’t like the colour/pattern and I want something lighter.

Here’s what the formica option looks like from My Old Country House: 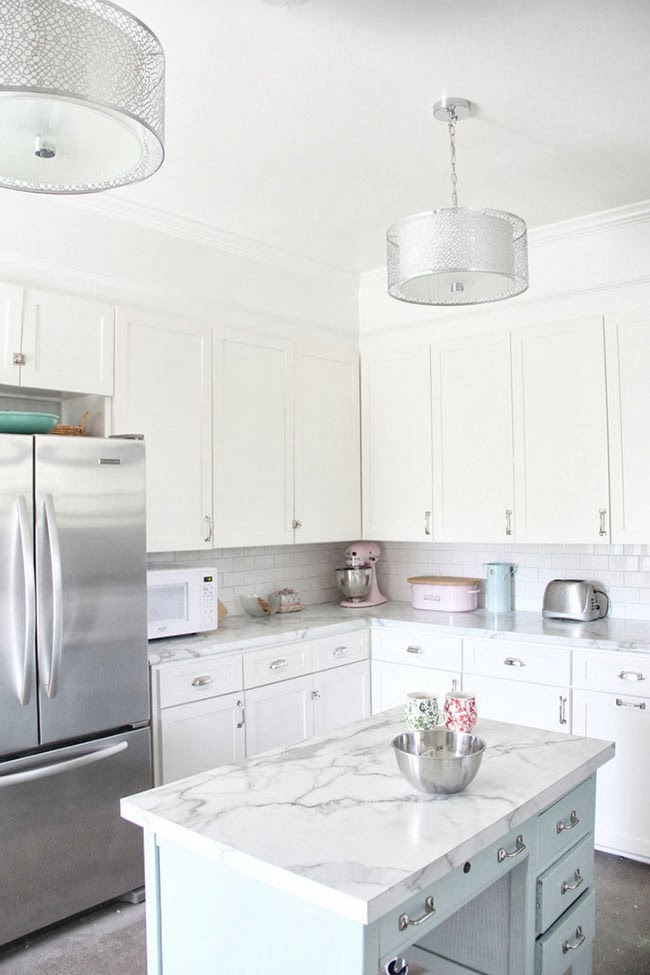 Looks pretty good, no? And if I REALLY hate it once it’s installed? Well, I can probably live with it for a few years until we finally move into our forever home and then I’ll get my marble worktops in there (if I still love them – who knows, I might be sick of the look by then). So there ya have it. Decision made.

The second big decision? I decided I want to repaint the lower cabinets. The white paint has held up remarkably well but I’m loving the look of these two-tone kitchens I’m seeing and well, I have a guy who can get them professionally spray painted for me for pretty cheap (thank you Wayne, I will never stop appreciating the work you do).  If I didn’t have a boyfriend that sprayed cars for a living, I probably wouldn’t bother but I might as well take advantage of it, right? It’s okay if you hate me right now, I understand.

I want to go with a dark blue to tie into the dining room and really join those spaces. I think the contrast of the light countertops and the dark cabinets with the brass handles is going to look rather delicious. 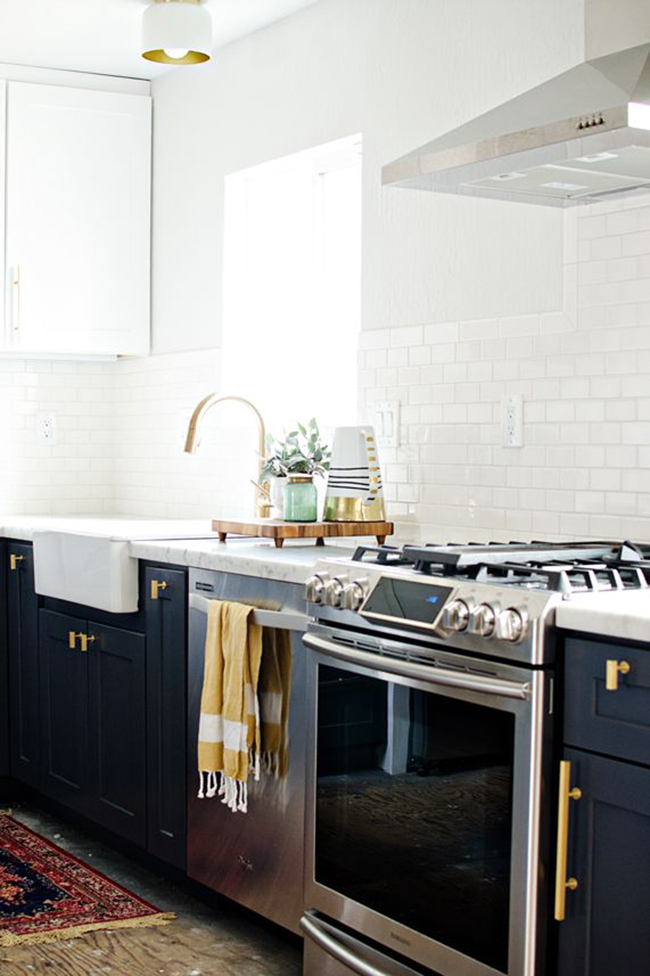 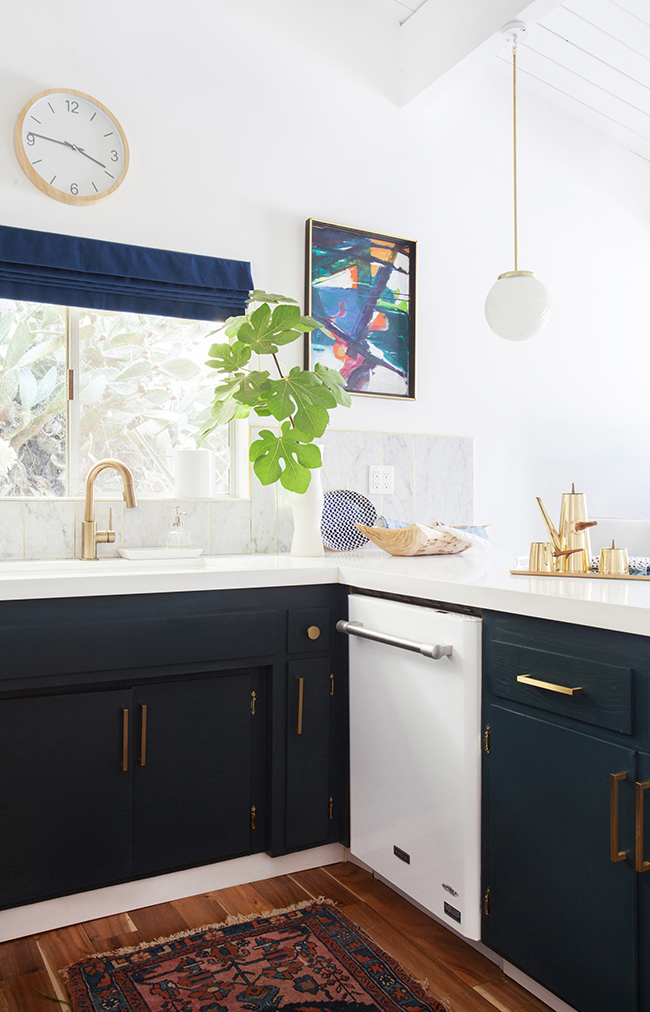 YUM. Also, Emily Henderson’s kitchen (that 2nd picture) is just so good. I’m totally stealing so much of what she’s done (including the brass trim as I mentioned the other day) and ya know what? I don’t care. It’s so beautiful and bright and accessible. I want it.

And here’s my little mockup of what my kitchen will look like after (nearly) all the changes I want to make (excuse the fact that my Photoshop skills aren’t fantastic and I’m too lazy to take the time to make this perfect): 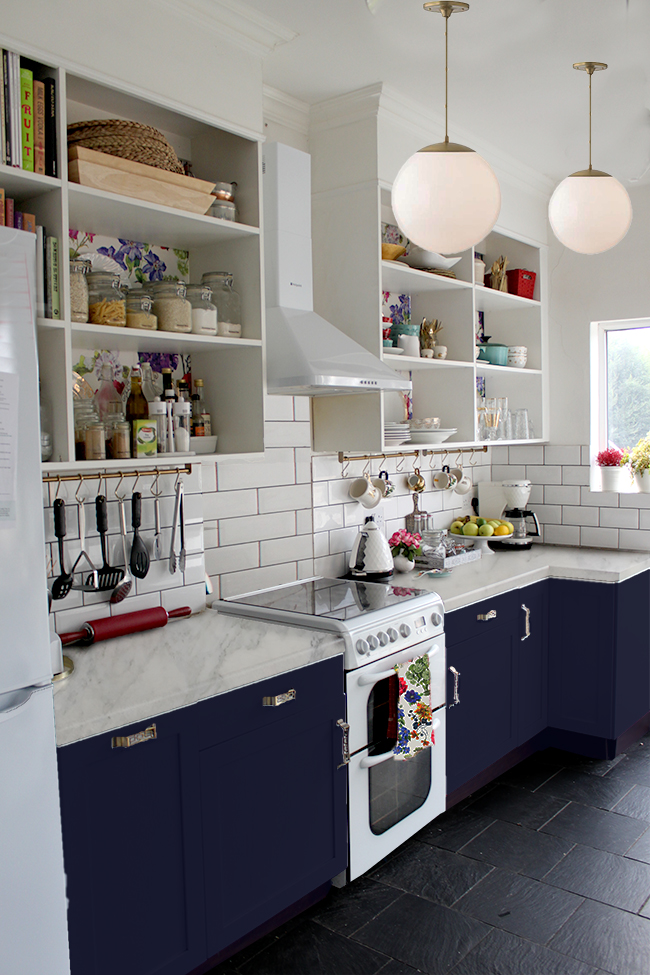 So here’s the big mega-long list of things that need to be addressed in the kitchen to get to that mockup that I’ve (mostly) covered in my last three posts:

Oh shit, see, when I write it all out I think HOW ARE WE GOING TO DO THIS ALL THIS YEAR? But hell, once the guest bedroom/office is done, the kitchen is bumping straight up that list. Shit gonna go down.

Also, I just needed to share this – I promise I wasn’t lying when I said that Meisha has a habit of pulling out the toekicks… (sigh) 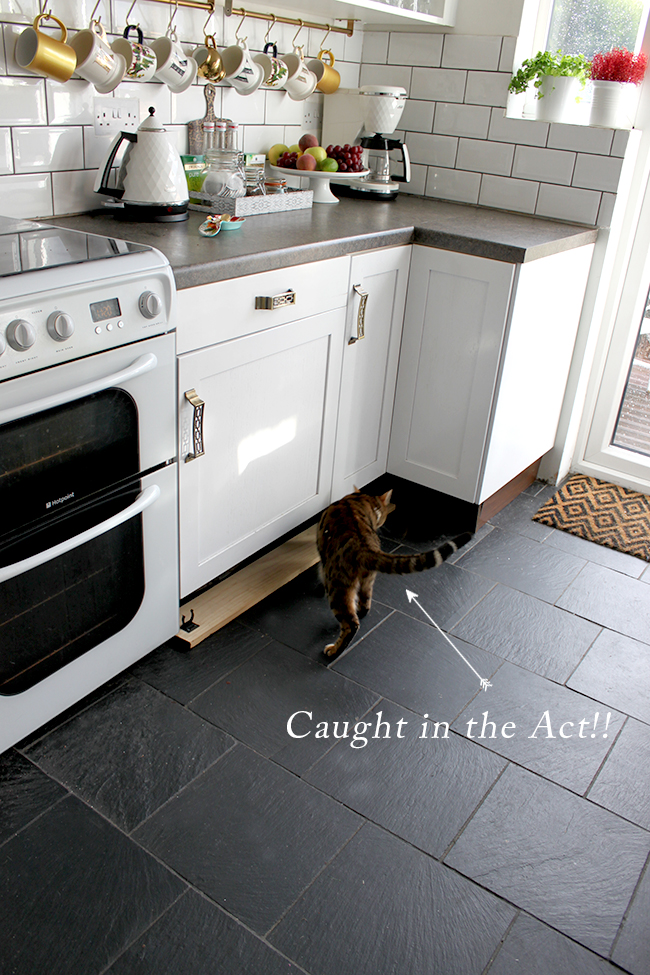 Inspiration images: Brittany Makes / Emily Henderson (all others my own)