I know it’s been ages since I’ve talked about the remodel that’s (slowly) taking place in the Guest Bedroom/Future Office and the truth is, that’s mostly because I didn’t have much to show. We talk excitedly about certain projects and then when it comes to getting off our arses and actually doing them, well, sometimes life just gets in the way or you need a bit of a chilled weekend or you just don’t fancy being covered in dust again. So yeah, that. Constantly working on projects, we’ve realised, doesn’t always work well for us and so we decided to get the mini-makeover of the dressing room complete and then we took a couple of months breather before starting the NEXT BIG THING.

That said, there has been a little bit of progress (Hurrah! Swoon Worthy: Celebrating the little things since 2010.) so I figured I’d share that with you today. 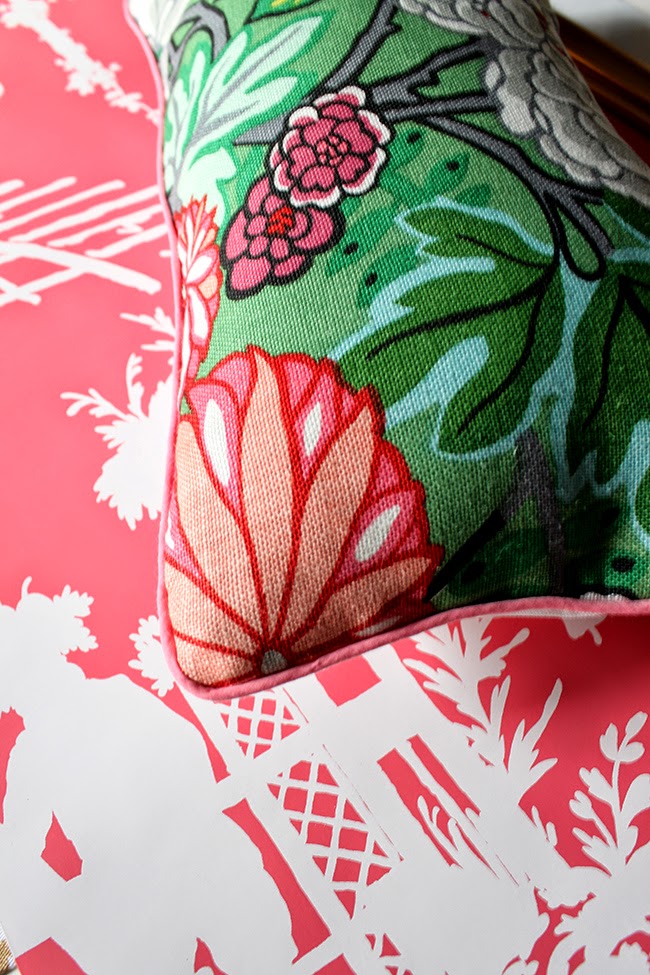 First… the pretty stuff because I’m nice like that ;)

In my post about How to Decorate Fearlessly, I talked about mixing patterns and how much better it was to get samples of things so you can easily see how well things work together. Well, in this particular case, the fabrics were coming from the US and so I asked for the assistance of my gal pal and seamstress extraordinare Hollie from Stuck on Hue (as she was the one I was ordering the fabrics/cushion from) to help be my ‘eyes on the ground’ as it were.

We discussed a few different options of the best fabric combinations in light of some of the other decorative choices I had made and we both decided that there really needed to be a touch of Chiang Mai Dragon fabric in Jade in the scheme. I mean, I love a bit of Chiang Mai Dragon (I have it in my bedroom in alabaster) and in this colourway, that beautiful coral-pink was such a standout.

She made that beautiful cushion you see below – it’s just a small splash but the coral piping really makes all the difference to how it works with everything else. 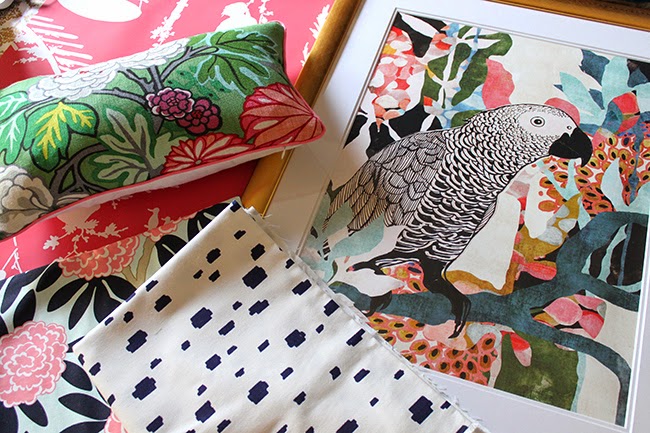 The peacock print from Cozamia was really my ‘jumping off’ point for the whole colour scheme in here. While the office will mostly be white, I did want some bright hits of colour to make it an energising space and so the fabrics and accessories will really bring that colour into the space quite nicely.

I have to admit, at first I was a little scared that I’d gone too far into ‘crazy person’ territory with this combination of coral-pink/navy/green in all this pattern but when you see everything together, it sort of does work, doesn’t it? (and if no, trust me on this one, it’ll be AWESOME.) 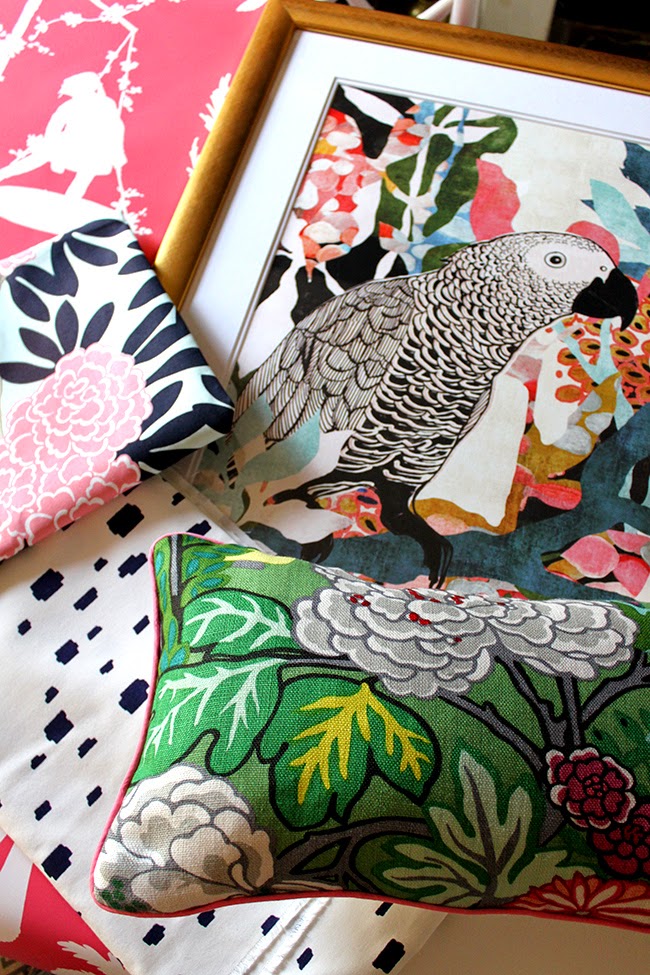 The Thibaut South Sea wallpaper will be on the chimney breast only but that pinky coral colour is picked up not just in the Chiang Mai Dragon cushion but also in the Cozamia print as well as the Caitlin Wilson Navy Fluer Chinoiserie fabric. 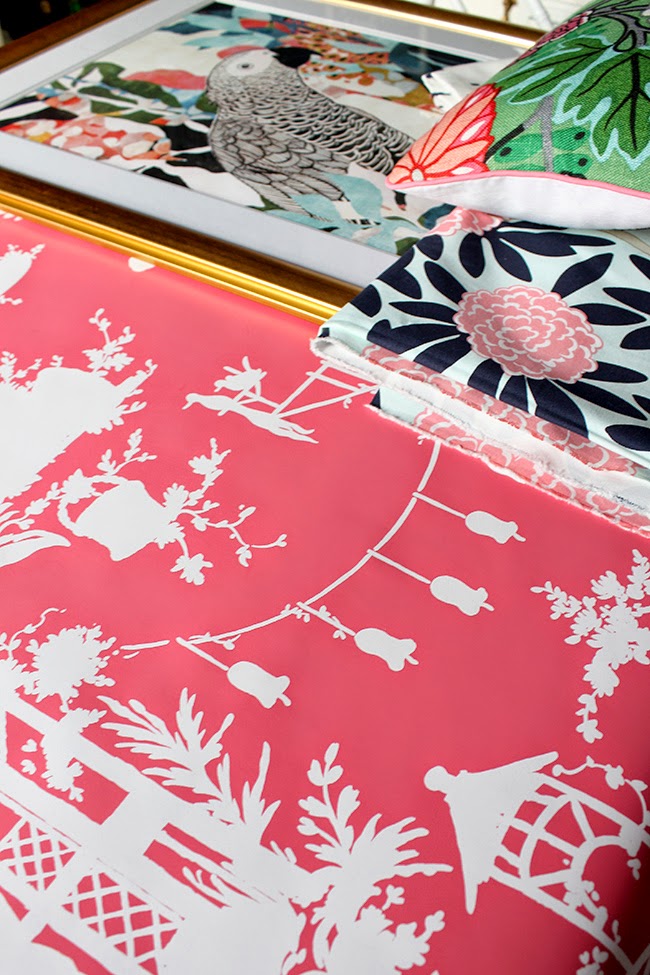 I wanted to include a smaller scale print as well in my scheme so Caitlin Wilson’s Navy Spotted fabric gives me that little pattern to offset the larger ones in here. 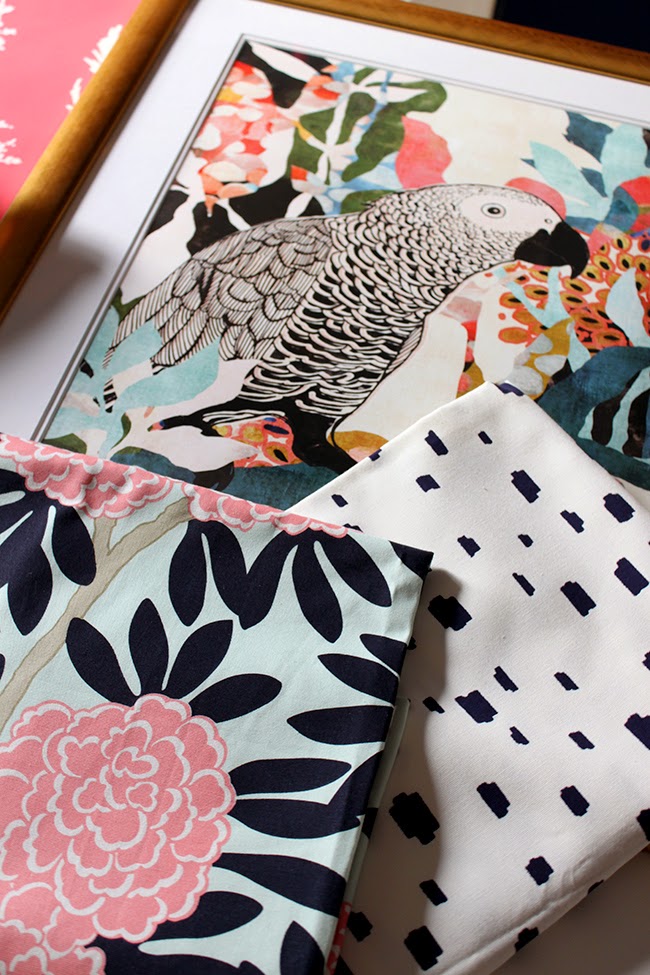 What I am actually doing with the Caitlin Wilson fabrics, however, remains to be seen – I only got a yard of each (on a budget see) so I’m hoping to stretch it a little ways. Stay tuned!

So, that’s the pretty stuff – on to the ugly stuff and the progress with the room itself!

We’ve stripped all the carpeting and have pretty much emptied the room (there’s still a few small bits and pieces but let’s ignore those for now, they will be gone soon). Shall we picture these floor boards all beautified and pretty? Ahh yes, you can see it now, can’t you? 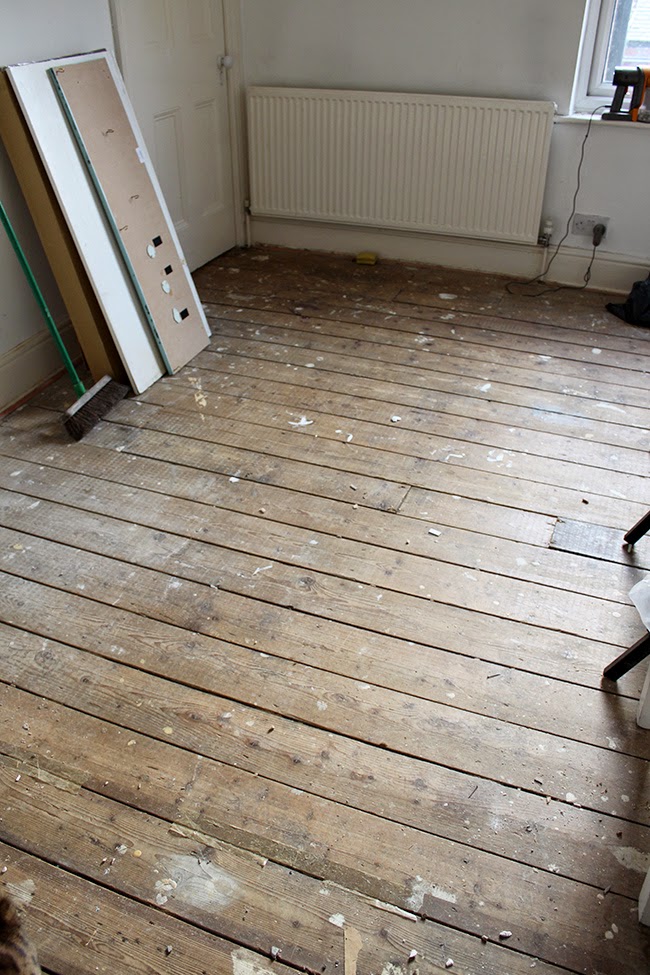 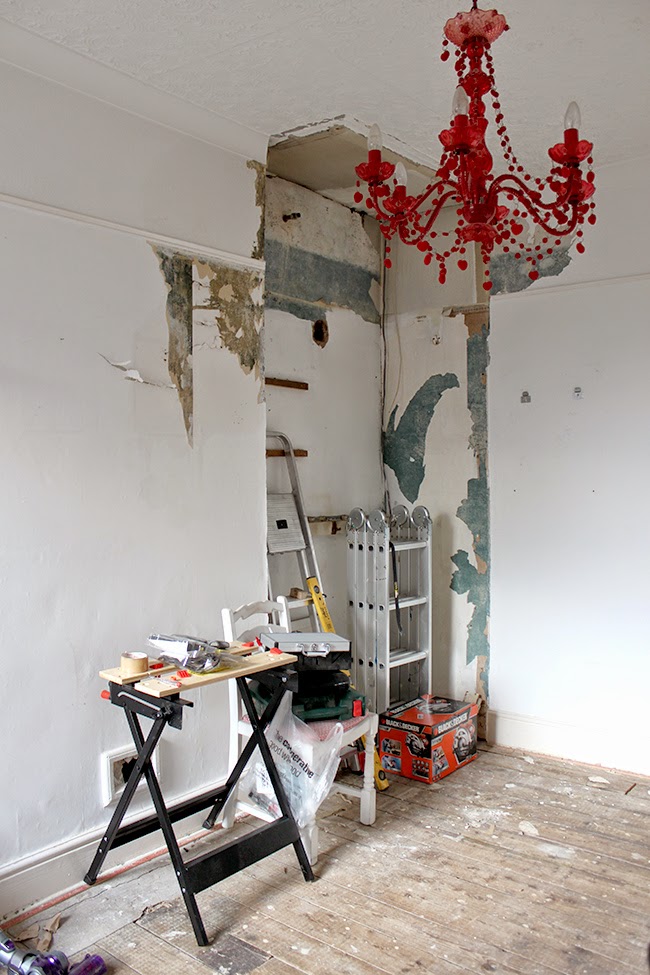 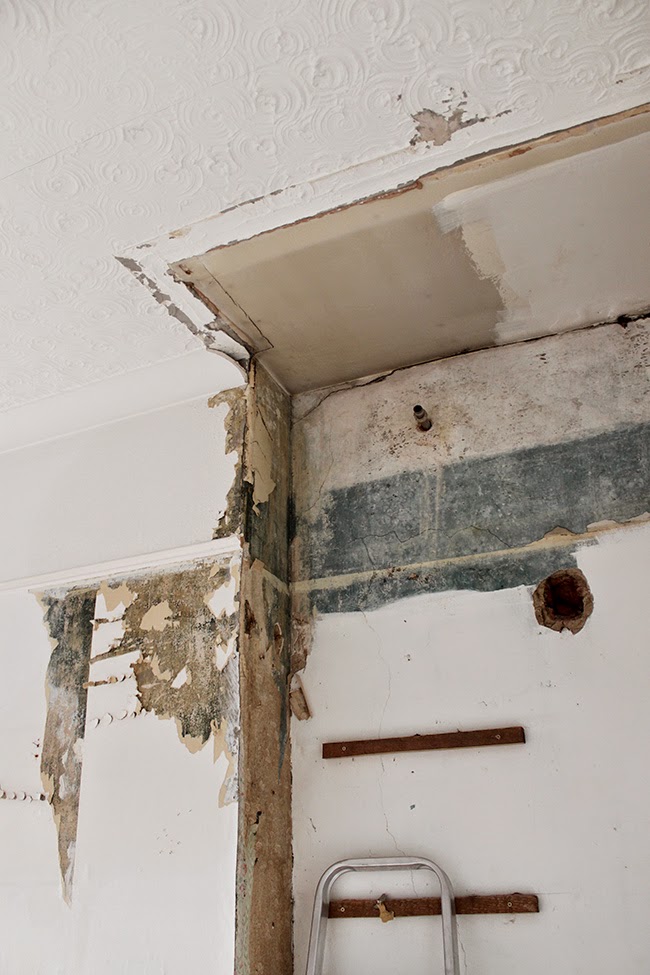 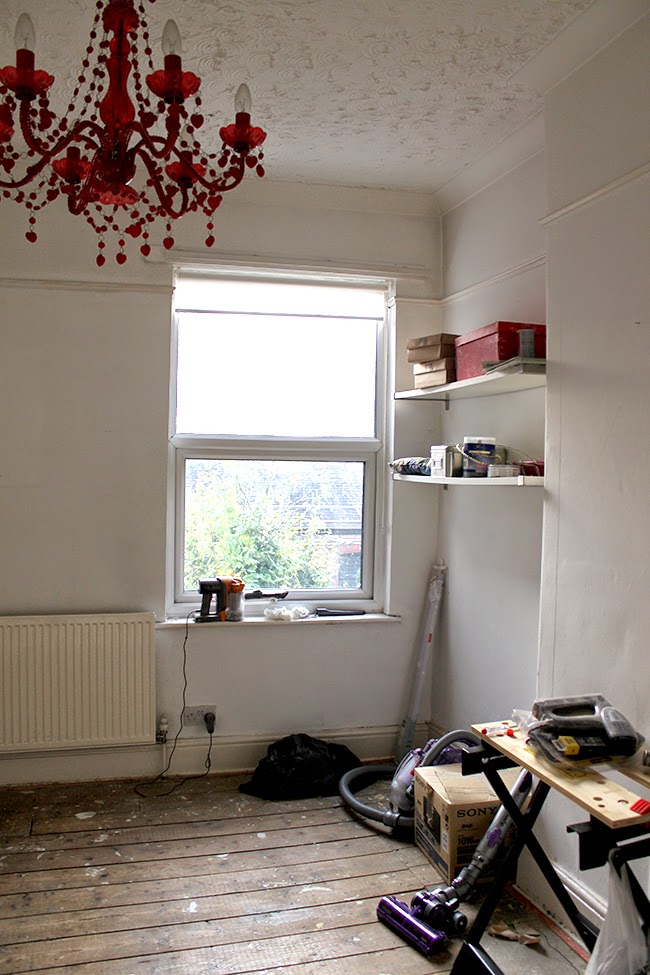 The chandelier will be going on Freecycle at some point soon, the shelving removed, and then we’ll be scraping all that horrible swirly painted plaster off the ceiling (and yes, it’s plaster, not Artex thank god). Following that, the cornicing will be taken down (it’ll be replaced) and then we’ll start work on completely renewing the ceiling with nice smooth plaster.

Good, messy times ahead before we get to have fun decorating – such is the way of DIY! Meisha is silently judging me with her EYES. I know, I know, it’s gonna take a while but it’ll be worth it, I swear! 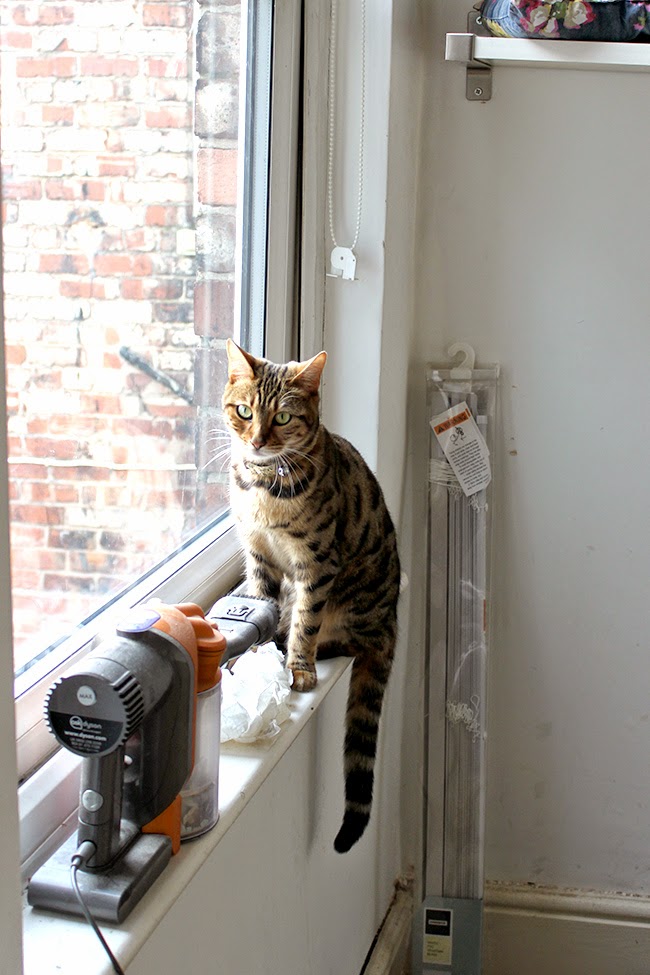 So that’s my update for now – what do you think of the fabric/wallpaper/print colour combo? Do your pets silently judge you for your decorating choices? Or is that just Meisha?