Let’s talk about that one time I blew the budget…

Wayne sometimes teases me when I dreamily gaze at bigger ticket items that I’m going to have to remove the ‘pretty on the cheap’ line in my blog header. He’s joking of course and I laugh but at the same time I have to think, “Am I being dishonest to my readers by not always going the cheapest route?”

So I thought I’d open up the discussion here because I want to be transparent with you guys and open and honest. Yes, I will often will look for the best price on something and I will often go the DIY route if I think I can but truthfully, I don’t always. Why not?

Well, let’s start off by talking about my recent dressing room makeover mostly because I totally went over budget. Yep, totally. 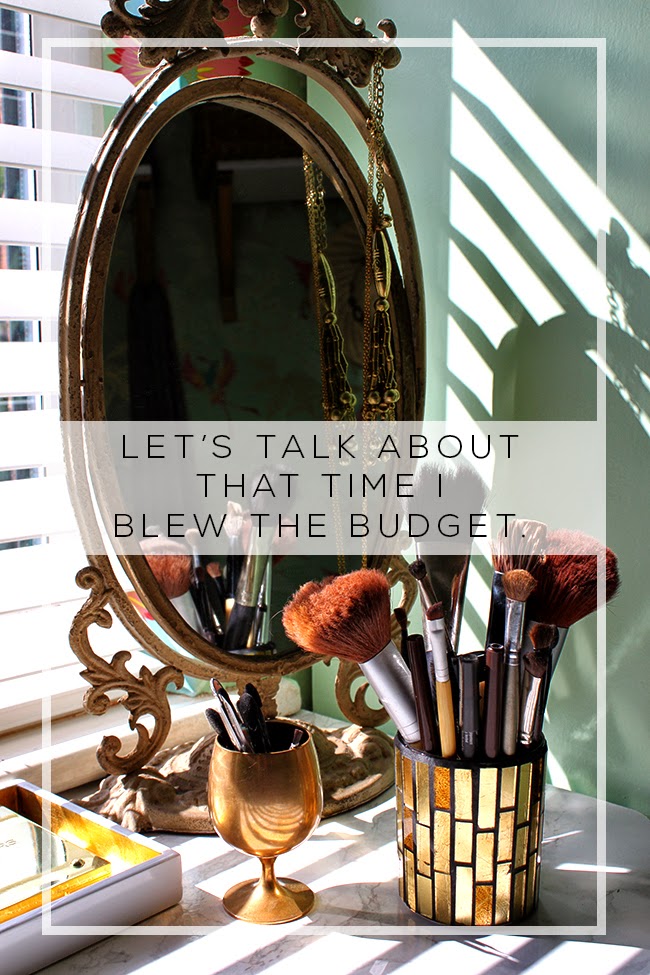 Initially, I had decided I would spend around £500. So let’s start there.

Here’s a breakdown of costs –

Yep, a whopping £300 over my original budget.

Hmm… so why did I go so far over budget? Quite simply, this allowed me to get the room exactly as I wanted rather than wait and revisit the room again in the near future. What pushed me over budget was essentially down to the new full length mirror and the cowskin rug (costing me £400 just for those two items) both of which were later additions to my original plans. 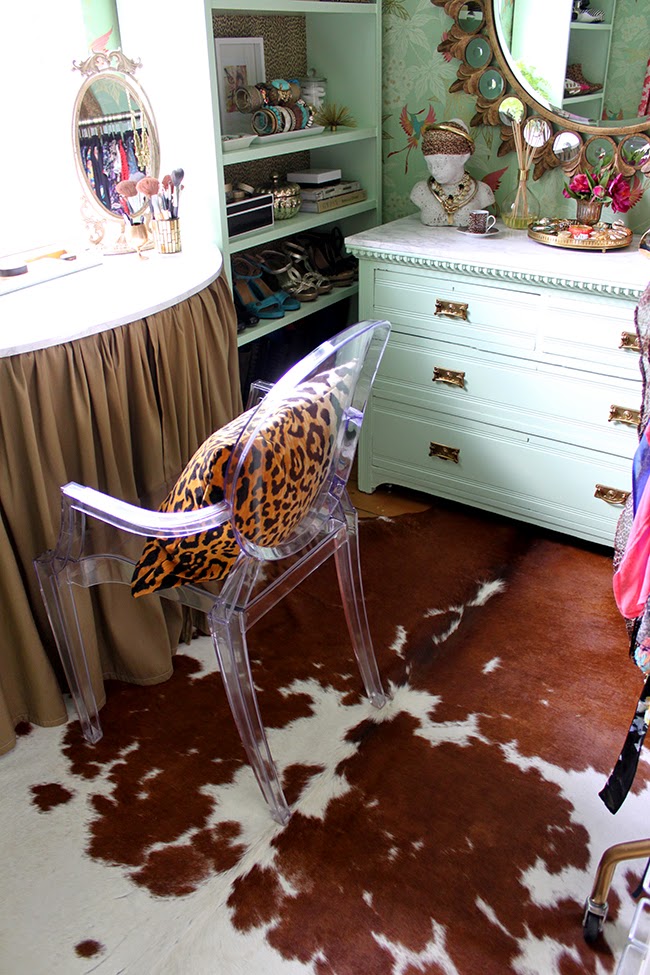 Now, I am fully aware that £800 for a ‘mini-makeover’ probably isn’t what many people would consider “pretty on the cheap” – it’s not a huge amount of money but it’s nothing to be sneezed at either. Perhaps I should have called it a ‘medium-makeover’? Again, ‘budget’ is relative, right? Perhaps £800 is not much at all to you or perhaps it’s a huge amount that would involve months of careful budgeting and saving. It’s all relative really and I’m fully aware that you guys may be at all different stages of your financial lives so one person’s ‘bargain buy’ may be another person’s ‘splurge’ item.

Anyway, in the spirit of openness and honesty and all those happy fuzzy things we can talk about amongst our friends, there are a few things I think are worth mentioning.

1. Everything was bought with cash. I really feel quite strongly about not going into debt when it comes to prettying up a room and so any disposable income I have goes into a savings account I call ‘House Fund’. I dipped into it a bit more than I was going to for this one but the money was there to spend and yes, we will still eat this month and we won’t have bailiffs at the door. 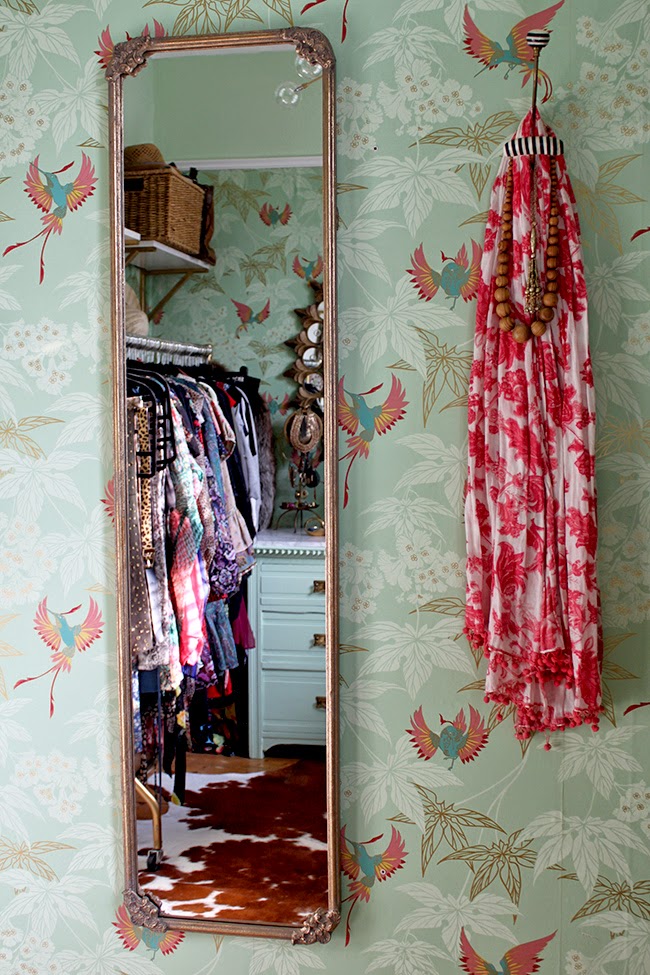 2. I DIY’d as much as what I felt I could.  The chest of drawers really just got a lick of paint and a new top, the Billy bookcases were hacked, the pelmet and vanity were also DIY’d. Sure I could have spent more on these things but it didn’t seem sensible when I knew I could get a look that I would still be happy with even though I went a cheaper route.

3. I’m no longer flat broke. When I first started this blog, money was REALLY tight. I mean, I wasn’t up to my eyeballs in debt or anything but we’d just purchased a house (which is scarily expensive with all the fees and costs tied up in that, never mind a mortgage payment), I didn’t have any freelance work at that time and money was being spent on stuff like floorboards and insulation and appliances. Not necessarily the pretty stuff. We’ve moved on now, the biggest work is (mostly) done and there is more disposable income for ‘pretties’, ya know?

4. I wanted a room fit for a grown up considering, at 41, I am no longer allowed to call myself a ‘young adult’. It’s definitely a more ‘grown up’ space which was my aim from the beginning. I thought it was time I made a few ‘adult purchases’ to go with that. Both the rug and the mirror, while more expensive than your normal Ikea fare, will hopefully be with me for a very long time and can easily be used in other rooms or more likely, in our next home. In fact, I have plenty of leftover wallpaper for future projects. Plus? Those Ikea bookcases are looking rather smart, I have to say. I wouldn’t object to keeping them for a good while too. The room was originally done on a really tiny budget and I thought it was time to give it a proper finish. 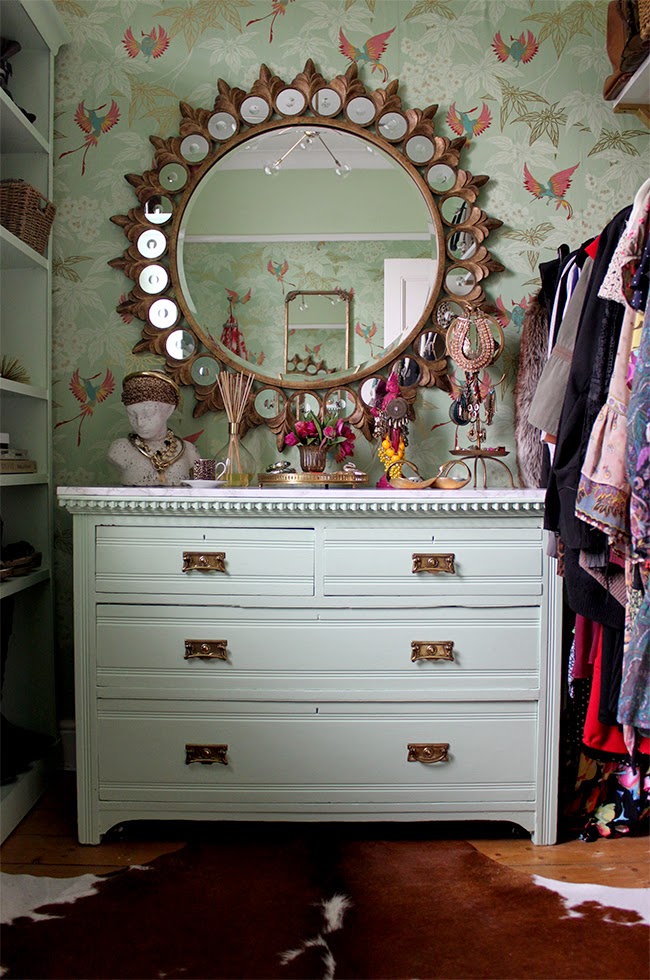 5. I didn’t actually go crazy with the spendiness. I’m so happy with this space and every penny in my mind was worth it to get a luxurious finish. However, I would have loved to have purchased the House of Hackney Wildcard silk fabric to make the skirt and pelmet from but again, those aren’t things I would really be able to take with me (unless I had a room and window in these exact measurements in the future which is probably unlikely). I could have also purchased new shelving or a new chest of drawers or actually put in built-ins instead of hacking the Billy bookcases. I did make some conscious decisions of where to spend the money and where not to.

So in conclusion… I think when it comes to decorating, it’s down to choices in terms of your individual budget. Where to splurge (on things you can take with you if you move or use in other rooms in the future) and where to save (on the things that will stay with the house if it’s not your ‘forever home’). Everyone will have a different take on this.

I hope this doesn’t come across as making excuses because that isn’t the intention – I just wanted to explain my thought process, thinking it may help you with deciding what’s appropriate for your own circumstances. It’s a delicate balance and no one can judge you for making up your own mind. 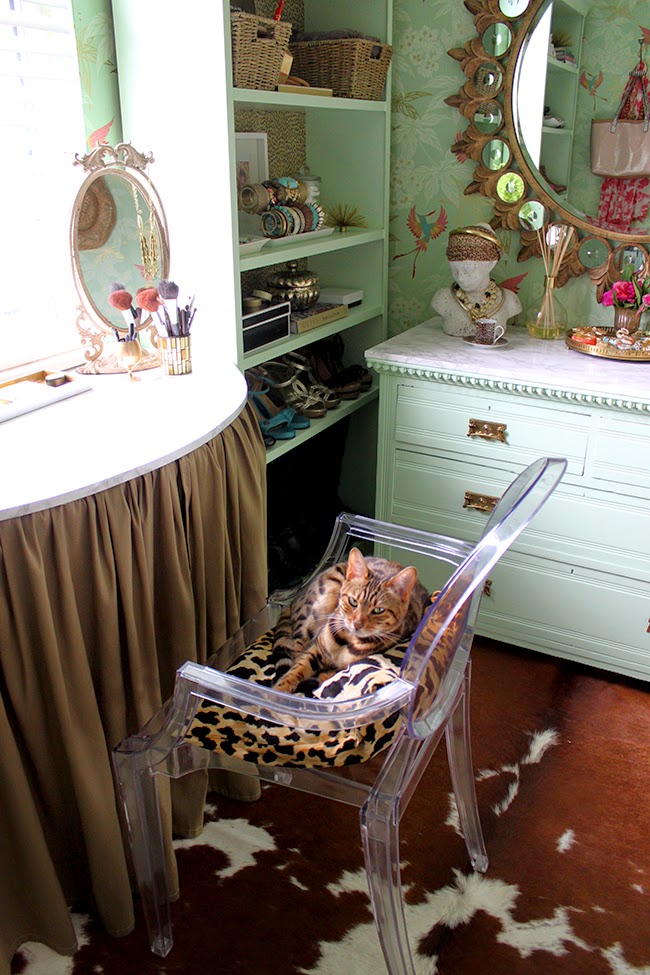 Except for Meisha because she’s a judgemental cow.

And finally, do you think I should change my tag line from ‘Inspiration, DIY and the Quest for Pretty on the Cheap’? If so, what do you think it should be? If not, why not? Have you ever gone way over budget on a project? Perhaps you have your own reasons why? I’d love to hear your thoughts on this! Weigh in in the comments…

Oh and don’t forget, there’s still time to vote for my little splodge on the interwebs in Amara’s Interior Blog Awards 2014 in the DIY category! Thank you to everyone who’s already voted, it truly does mean so much to me! 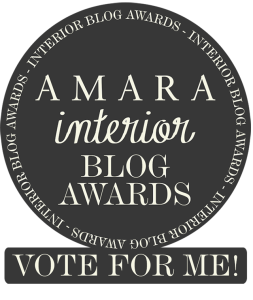