First off, I’m overwhelmed by the response on the bathroom remodel! Yay!! I’m so glad you liked it and weren’t all, ‘Oh my god, we waited all this time for THIS?!” ;)

If you missed that post where I finally shared the bathroom after *mumble mumble* months of work, you can find that here.

I mean, hell, if I’d known you guys were gonna be so damn cool, I would have shared it earlier ;) (Ok, not really, honestly I was gnawing at the bit to get this thing done.) 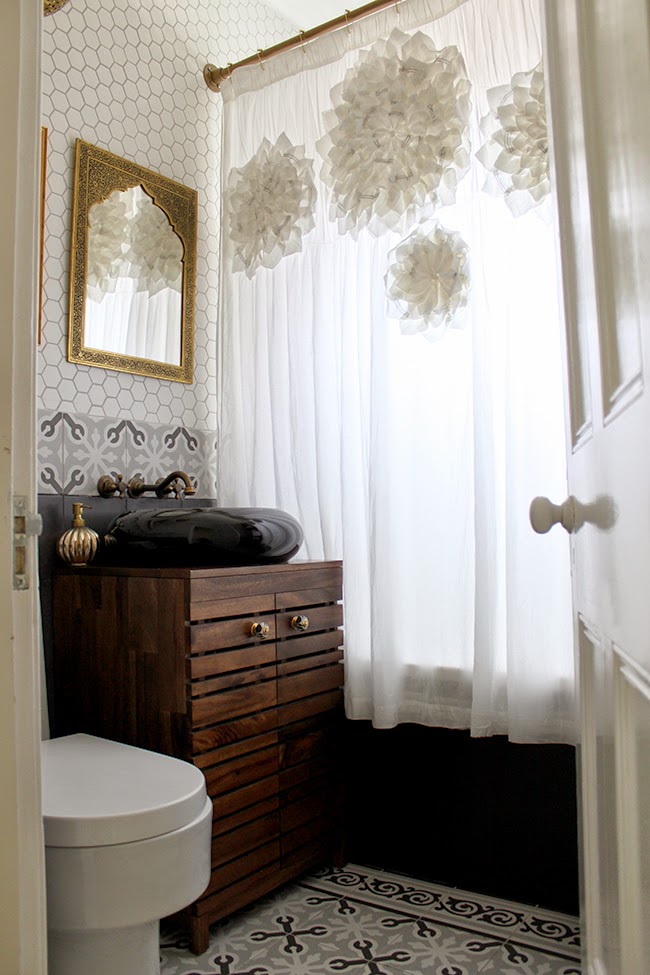 But now, I need to talk a little bit about the detail of all the stuff that went into making this teeny tiny space… well close as I could get to “swoon worthy” ;)  We did this makeover on a limited budget (I think we spent around £2500 all in) with a lot of trial and error in terms of the work and were very grateful for a few of the companies we worked with in terms of products to get it to what it is, nearly a year after starting the work.

However, my first port of call, bearing in mind that we did not call in a single tradesman for this project, is to say that my Wayne is a keeper, y’all! It was like all the little skills he’s learned over the few years we’ve been in this house have had to come to the fore on this one – from plastering to tiling, electrics to plumbing – he did pretty much all of the dirty work while I just played assistant, getting the tools and getting messy along with him. But really, he’s pretty much responsible for all the work while I was just the designer! ;) GO TEAMWORK!!

A reminder of the original design reveal…

I’ve actually surprised myself how closely I stuck to the original design considering how frequently I change my mind and the fat that this design was created in a single weekend when I was stuck in bed with an illness.

However, I would be remiss to not mention my sponsors on this project which either provided items at no charge or at a discount and to whom I couldn’t be more grateful to for their patience and their willingness to work with me on this little/big project…

The bathtub and side panel, toilet, shower fixture and that contemporary black sink basin were all from Bathrooms.com. As much as I would have loved to put a brass shower fixture in here, I don’t for one second regret the one we have. Talk about a perfect shower that feels like you are standing under a waterfall. It’s absolutely one of my favourite things in this bathroom because our water pressure and temperature gauge thingie was total rubbish in our old shower and this just makes me ready to tackle the day.

The sink was recently called ‘mysteriously sexy‘ and that’s the first time I’ve ever heard a sink referred to as ‘sexy’ so ya know, it all works for me. I do have to clean it pretty often (and if you had hard water – which we don’t – you might want to give a black sink a miss) but it’s definitely pretty and worth the extra effort! At some point, I’d like to replace the chrome stopper with a brass one to match the tap. 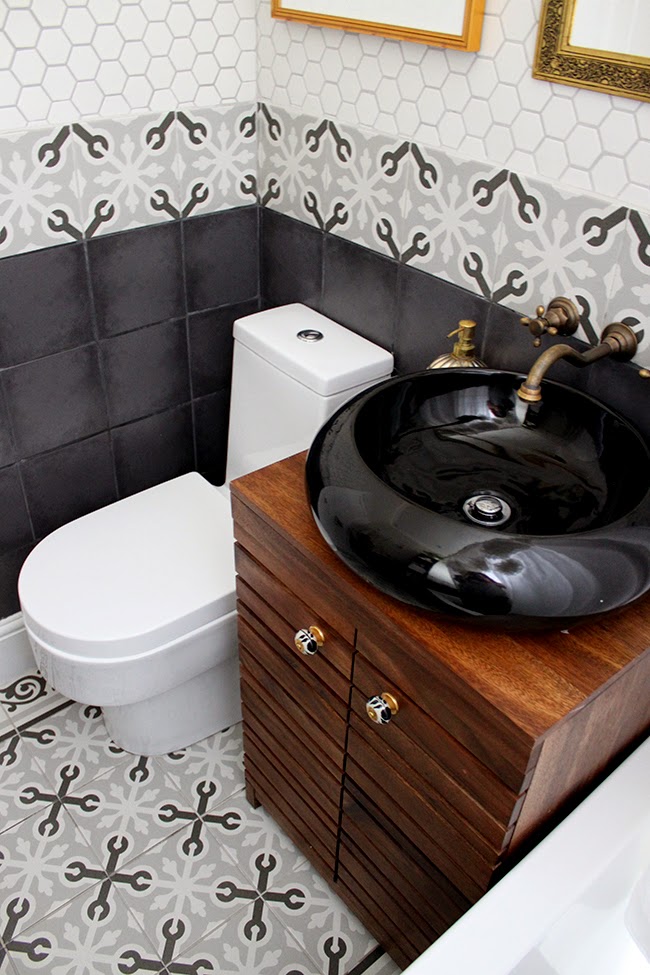 Tile Mountain provided the most beautiful pale grey grout (I’d struggled finding the right colour and tried a couple others that were just too dark but this stuff is the most perfect soft grey and like a dream to work with) as well as the silicon (also top quality stuff, much better than the Unibond crap we’ve used in the past which seems to go mouldy as soon as you turn on the tap) to seal the bath, ensuring a water tight seal.  I’m their newest fan because their customer service is top notch and wish I’d actually found them earlier in the process of our bathroom remodel! 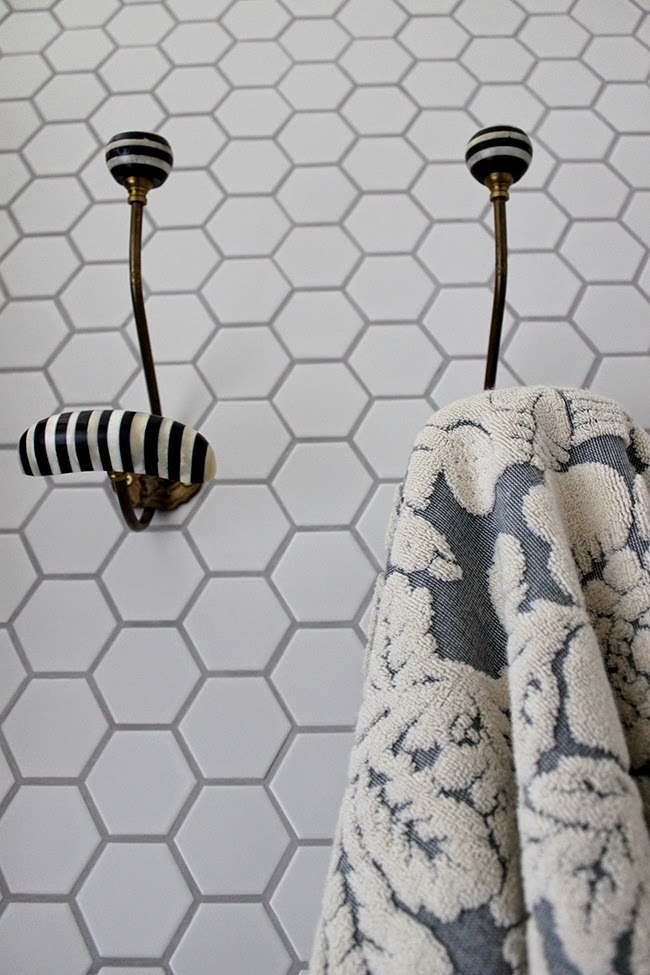 The Moroccan style lantern and mirror were provided by Moroccan Bazaar. They have some amazing items in stock and choosing my fixtures was actually a pleasure thanks to these guys.  As I said in my last post, the light creates the most beautiful shadows when lit, it really is stunning in the evening. 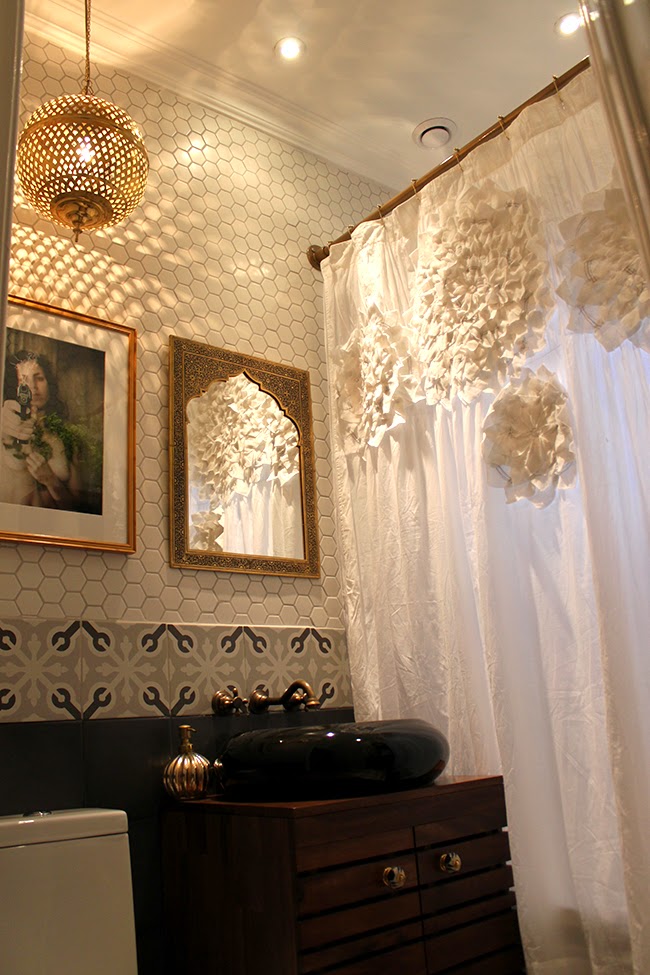 That amazing shower rail was a gift from Simplified Building.  They do all sorts of pipe style fittings and fixtures (so if you are looking for a shower rail like this or even to do an iron and wood type shelving system, these are the guys to call. Ask for Paul, he’s an absolute star and tell him I sent you.) It comes in galvanised steel (although they have some other colours available) and so Wayne spray painted it an antique gold in his body shop but it’s the best shower curtain rail I’ve ever had, no piddly little thing that falls down every time you open the shower, this thing is sturdy as anything and really added a bit of an industrial touch to the space. 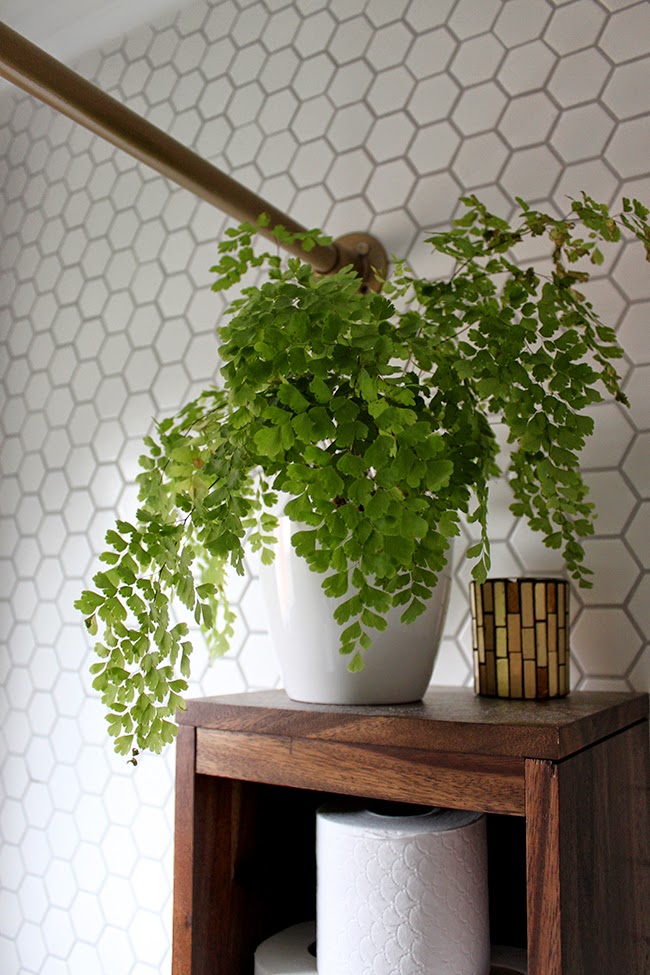 And now for everything else…

The patterned Victorian-style tiles both on the floors and walls as well as the black tiles are from Fired Earth.

After a long struggle of trying to find a large size white hexagon tile, I finally found them from this eBay seller.

My wall-mounted brass taps are from this eBay seller.  We were going to use a set of taps from Victoria Plumb but they came with the completely wrong fittings and Wayne made about 3 trips to various DIY stores to find the correct fittings for them with no avail. We finally just decided to order the same ones as we did in the sink and they worked out just fine! 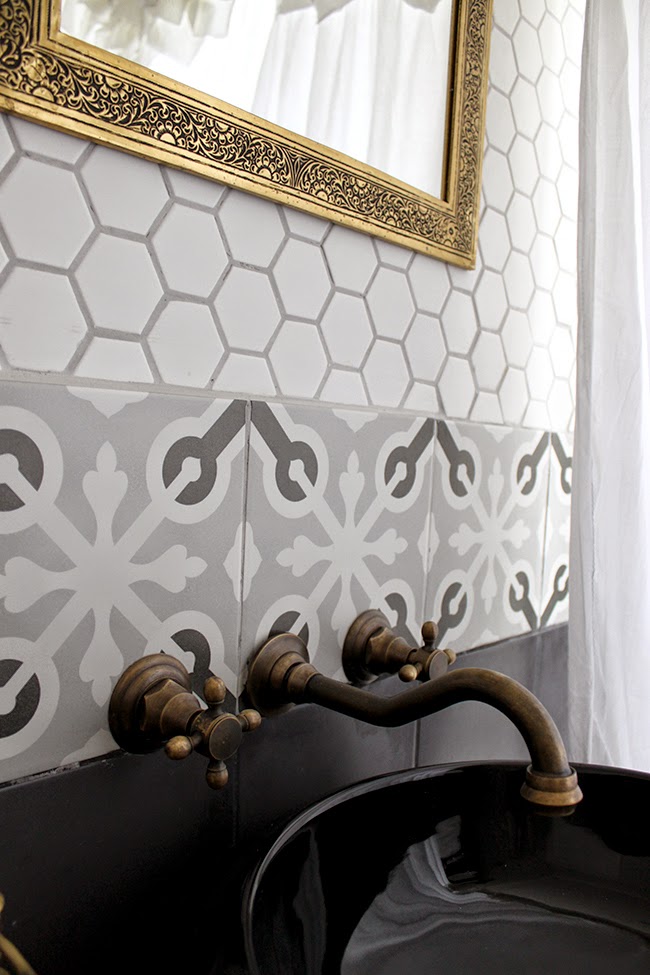 After a lengthy search for a suitable toilet roll holder that didn’t cost the earth (Side note: I can’t believe the prices of these things! Oh my god, they want like £200 for something that holds your toilet paper!! Seriously!!) I finally found this rather lovely one on eBay for £25 – yes, I had to order from China for certain items but they do look great, really sturdy and have held up well. 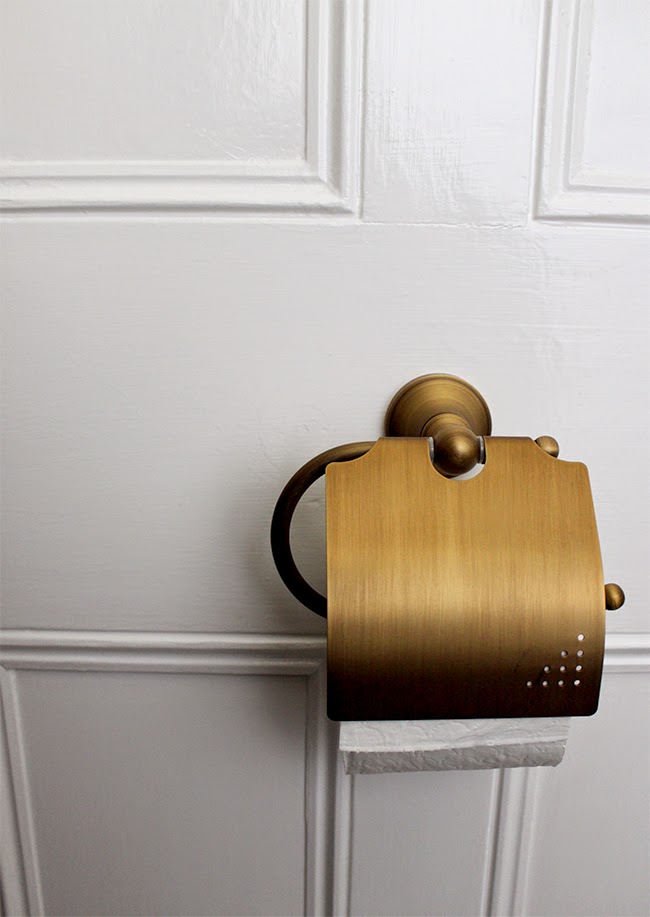 The sink unit and the shelving unit are both from Next.  They don’t supply this particular set any more but they have similar on the site.  I didn’t use the handles that came with them and filled in the existing holes, replacing them with knobs from Anthropologie. 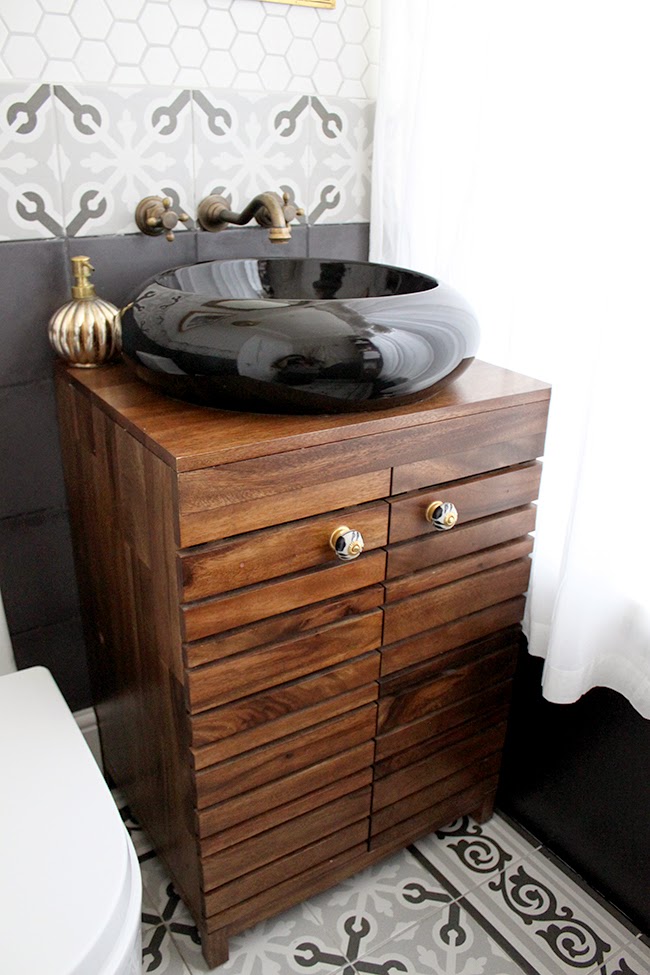 That very cool badass framed print is from Art.com. 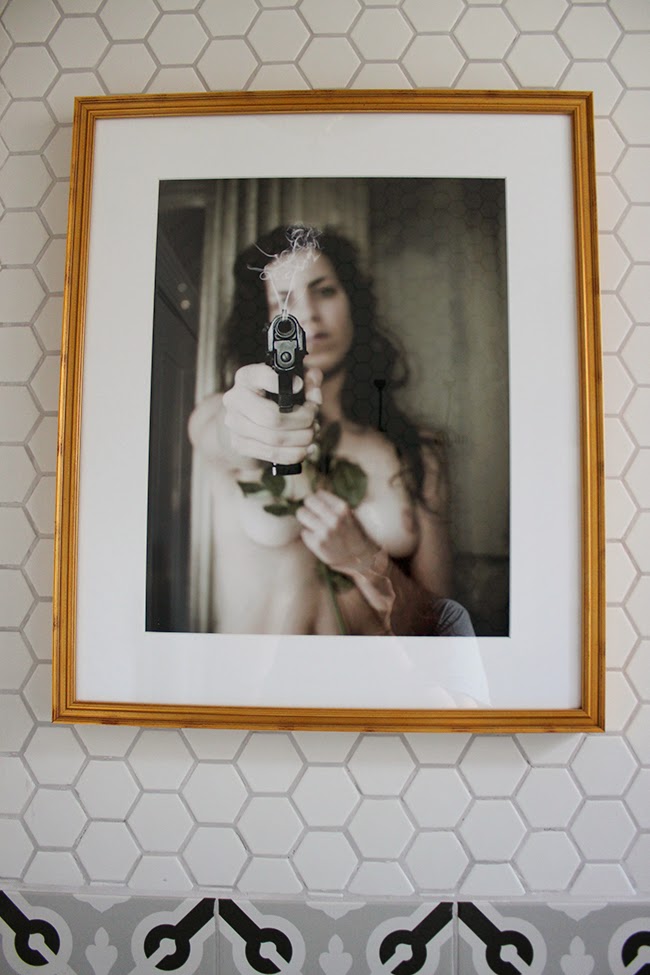 The hooks, towels, the small glass jar in the shelves, the knobs on the sink unit and shelving unit and that amazing shower curtain are all from Anthropologie. (Apologies that a lot of it is no longer on the site, you have to remember I bought this stuff last year! lol)  I was considering sewing additional material to the bottom of the curtain so that it hit the floor but I just haven’t gotten around to it yet! 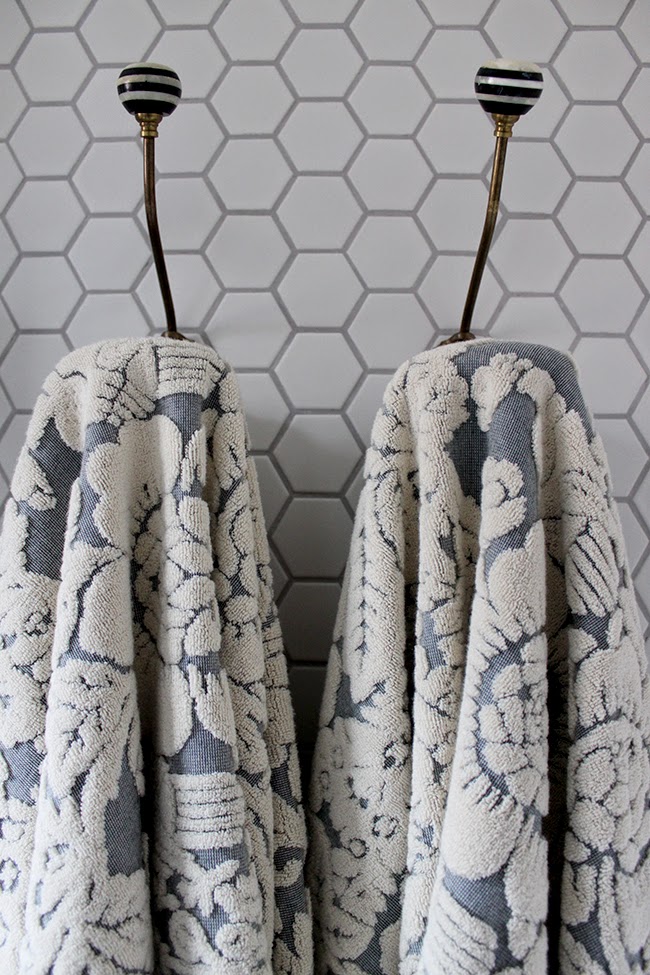 The soap pump and the tall glass jar are both from Zara Home. 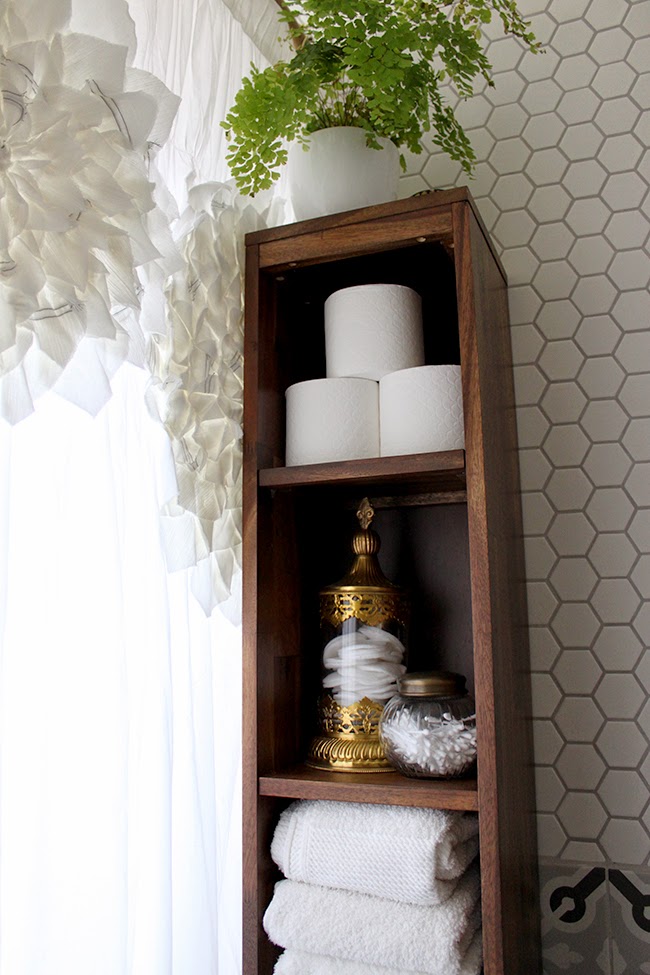 Finally, we have a weird situation with our bathroom window in that it is overlooked by the property next door. So after exhausting a huge number of options to give us our privacy, we ended up using a black-out film from Purlfrost to block the view in the bottom pane. It comes in white so it doesn’t look too weird and it definitely does the job as there’s no awkward silhouette when you are trying to take a shower in peace! 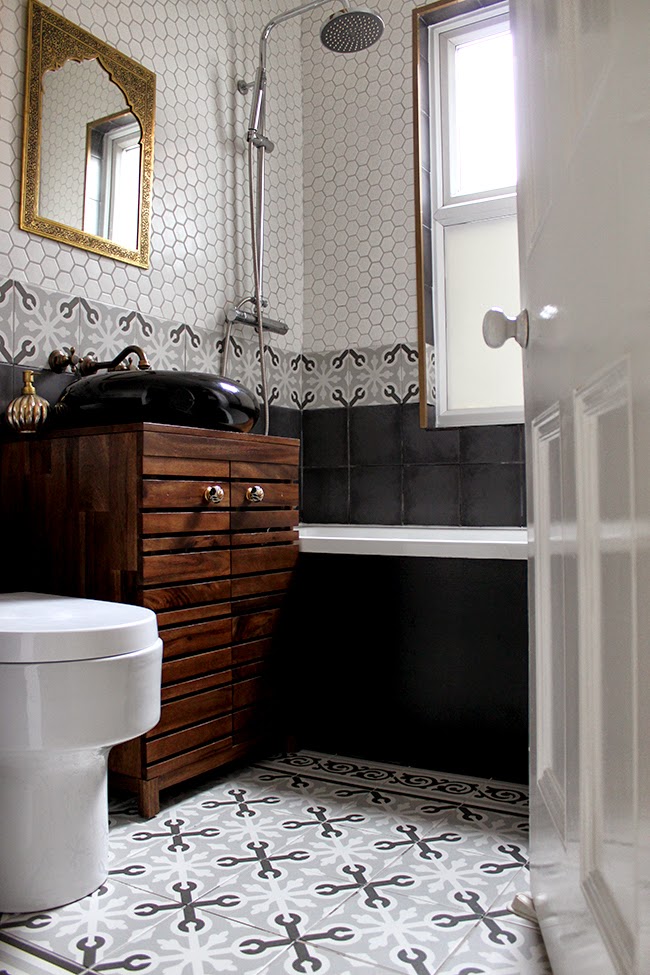 I would still like to replace the door knob in here but I thought I’d wait until we start on the hallway renovation and then do them all at once so that’s another job that still needs addressing.

I think that covers pretty much everything but of course, if you have any questions, just shoot me a comment and I’ll respond in the comments back!

Again, a very big thank you to Bathrooms.com, Moroccan Bazaar, Simplified Building and Tile Mountain! You guys rock my socks.

And a very big thank you to all you guys for being so patient and so lovely with your feedback. I promise the guest bedroom/office won’t take us as long!! ;)