A Better Back Deck: Building The Base and Platform

We’ve actually been talking about extending the deck for about 3 years. In fact, I put it on our 2013 Goals AND our 2014 goals but it looks like this is the year it’s finally happening. 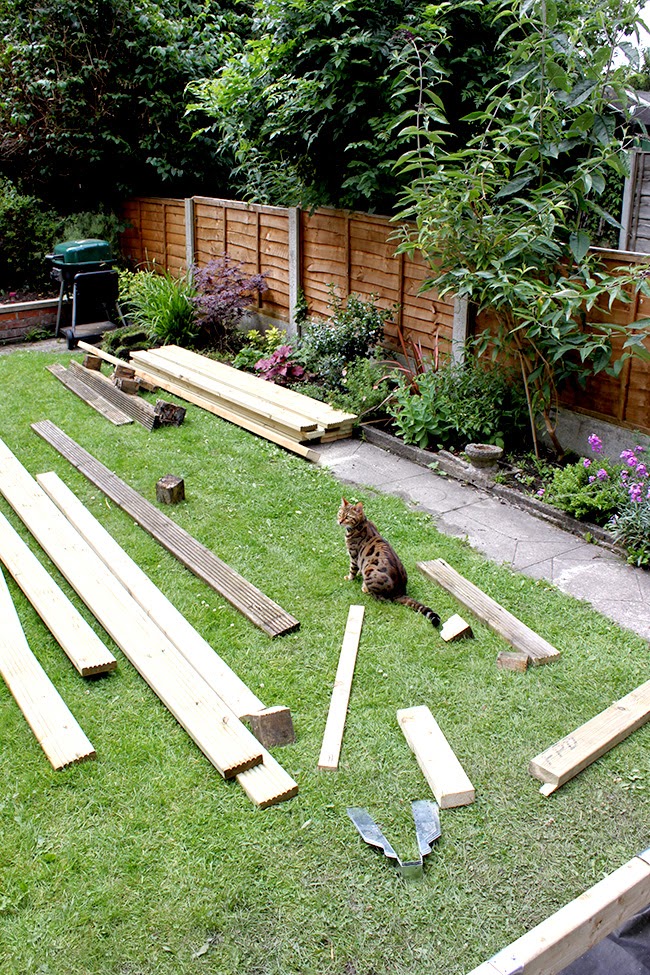 We made some great progress over this weekend and while you won’t find any really pretty ‘after’ pictures here (soz), I thought it might be good to talk a little bit about what we were able to do so far which has already made a hell of a lot of difference to our outside space.

The problem with the existing decking was that it was simply too small for anything more than a few chairs but we didn’t want to rip the whole thing down and start again because it was in good condition and replacing it all would have been a waste of money.  We also didn’t want to eat into too much of the garden itself, we only really wanted enough space to be able to have a dining area and a seating area so it didn’t need to be enormous, just bigger than it’s postage-stamp size!

We got some posts from Wayne’s brother in law (reuse & repurpose!) so Wayne started by using Postcrete to sink them into the ground and stabilise the new structure. 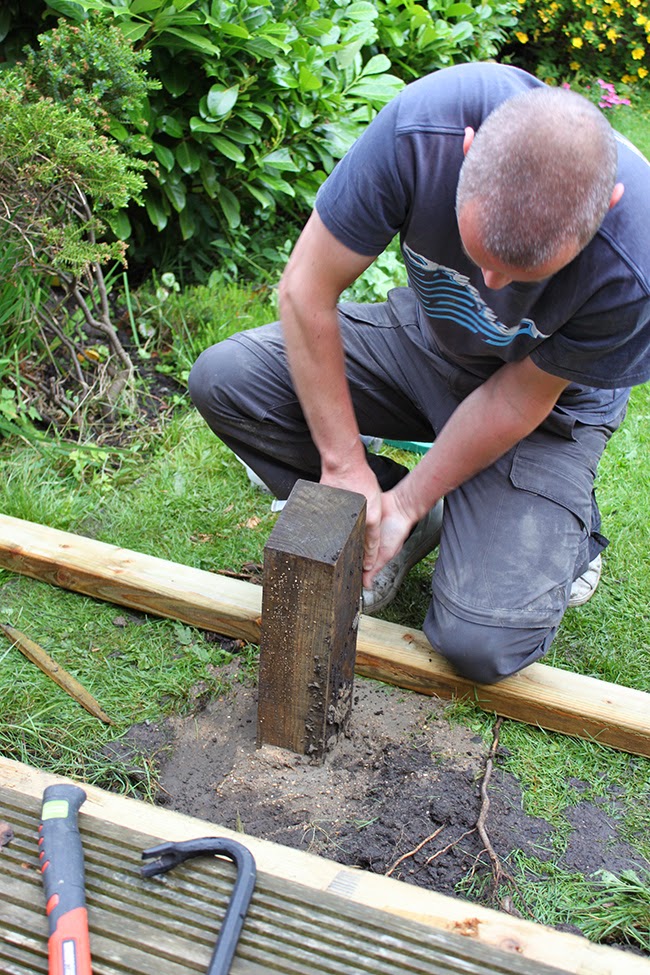 Once these posts were set, then the frame building could begin.  The outside frame was created first, attaching to the newly sunk posts. 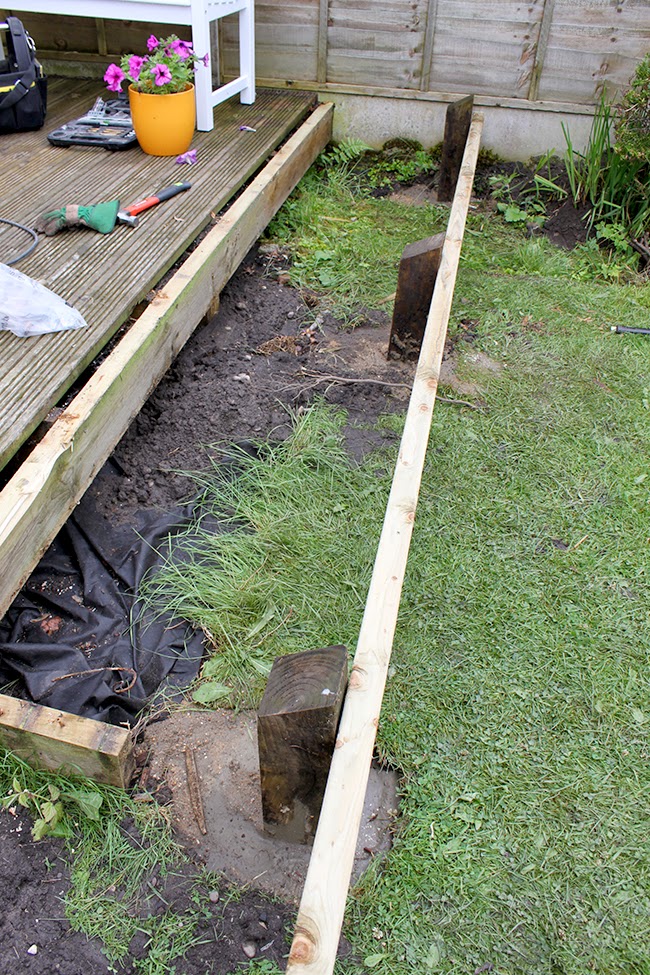 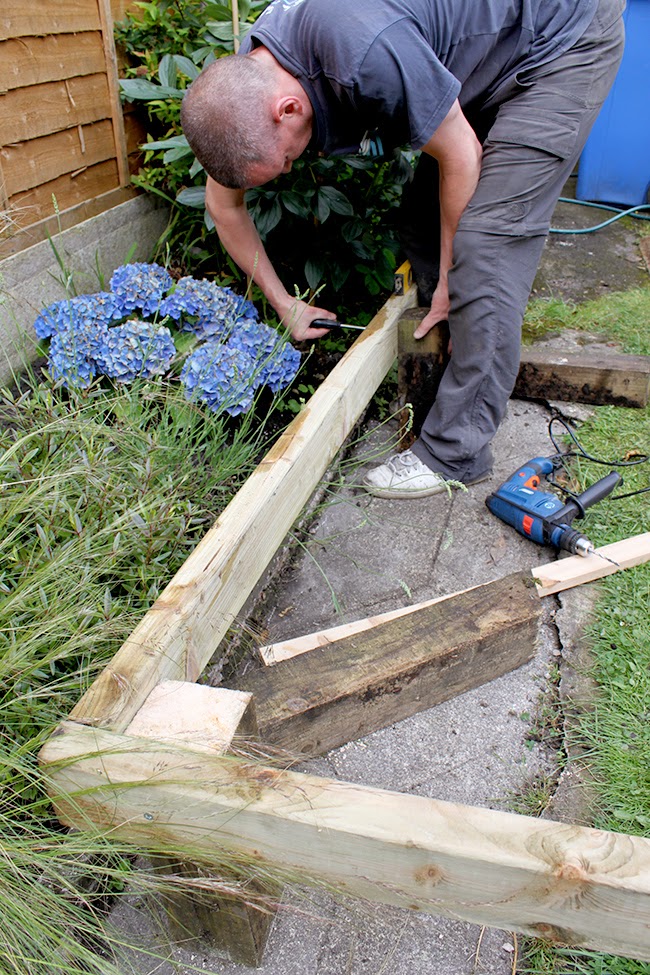 Meisha of course had to keep a very strict eye on proceedings. 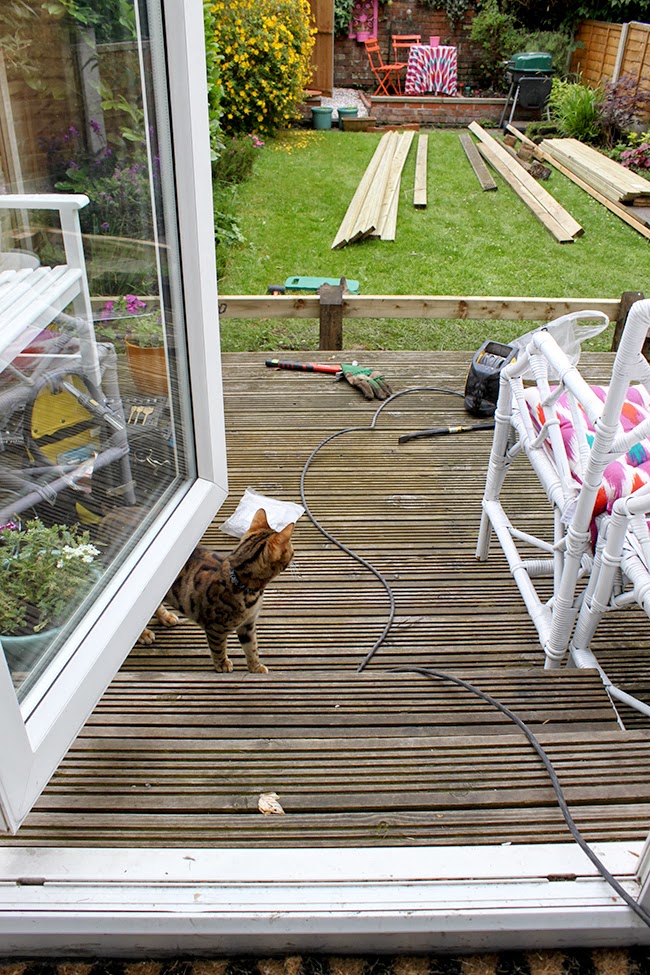 Once the outside frame was built, then we could start attaching the new frame to the existing one using joist hangers. 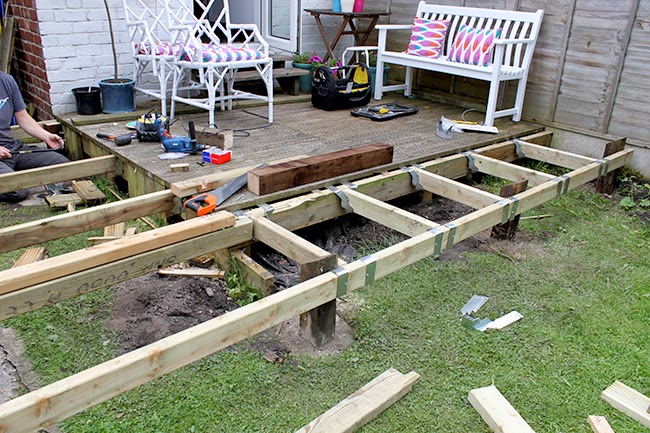 Posts were used as stilts between the longer side to give needed support and we laid a membrane beneath to keep weeds from growing through.  Meisha also had to check out the suitability of the membrane for general sleeping purposes.  I think it passed her vigorous inspection. 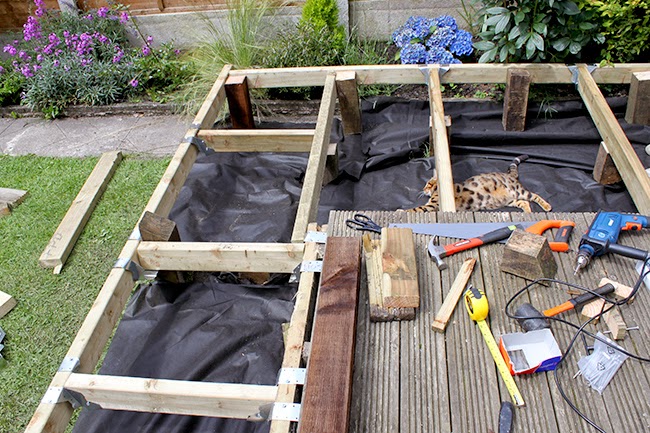 Once we were sure everything was level and secure, we started laying the new decking. 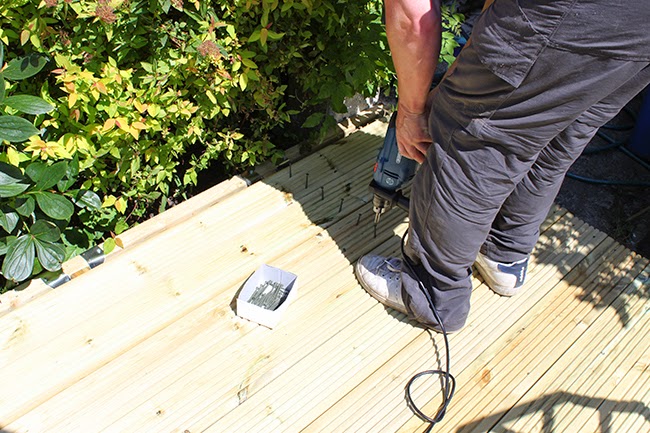 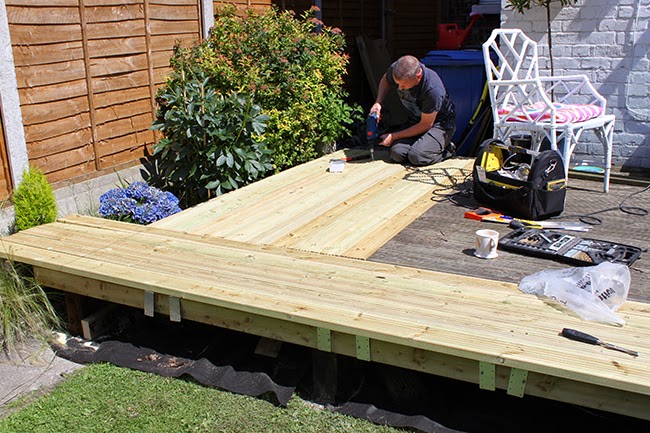 Once those long pieces you see above were cut to size and all 200 screws (!) were in place, we had our platform completed. 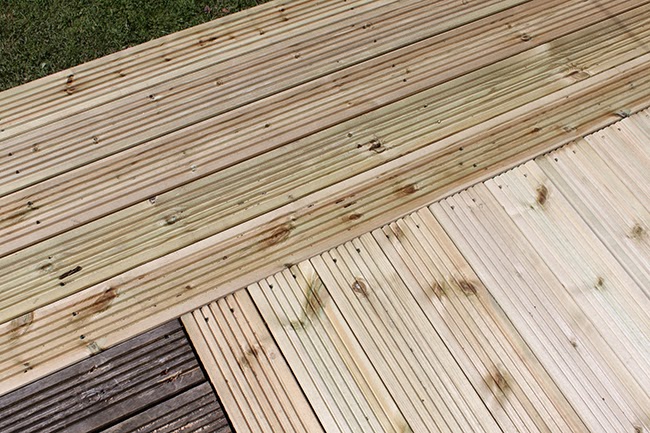 So this is what we started with… 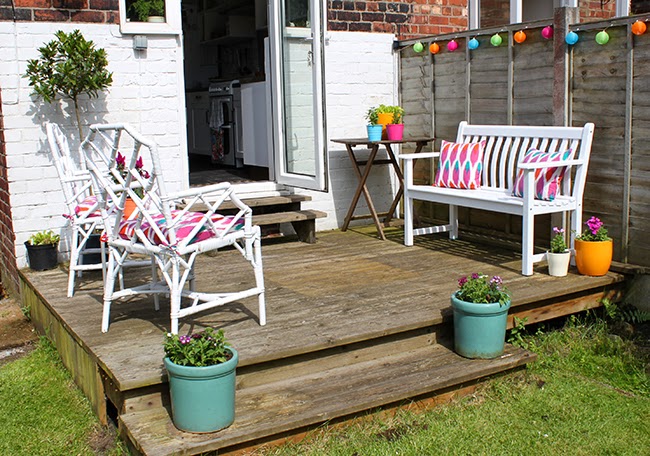 And now, we have a much bigger platform! Whoop! 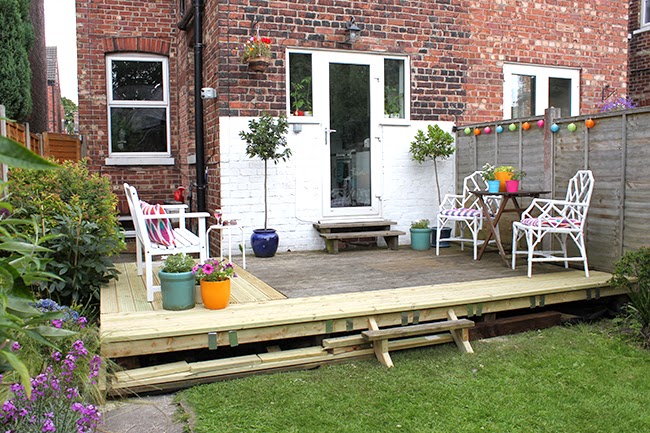 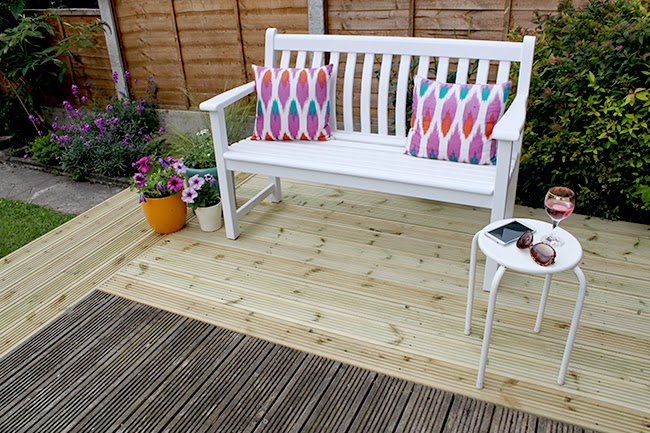 I’m fully aware my smattering of furniture is not nearly enough for this space but I’ve held off buying anything because I needed to get a better feel for the space one the platform was built. 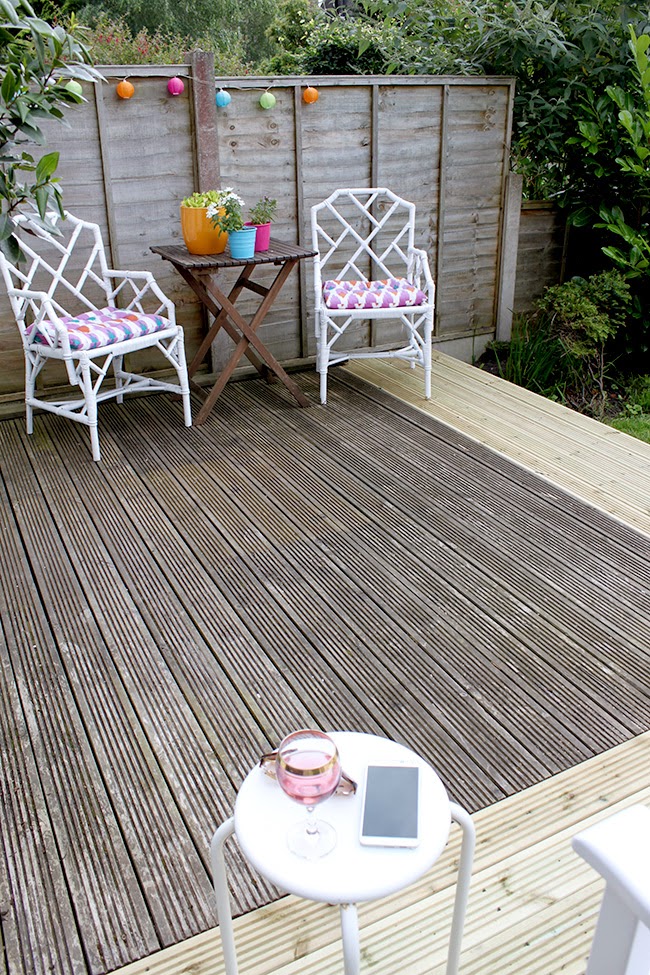 That huge gulf between the seating areas is obviously not the look I’m really going for.  Nor is the old wood/new wood combination. 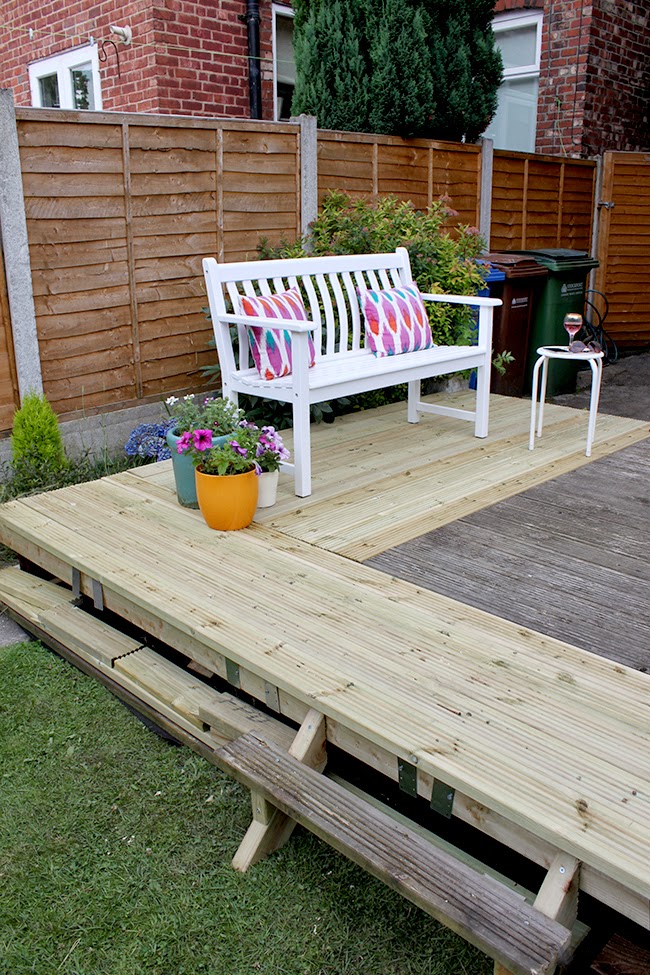 No, there is still plenty to do here including the fascia at the front, a proper step (that’s just temporary so we don’t break our foot walking off that ledge) and a railing around the perimeter.

As a bit of a sneak peek, this is the deck rail (from Wickes) I’ve chosen – alas, the railing will cost us as much as the decking extension cost us so far so it’ll be a bit before we add these and complete the whole thing! I’ve had this style picked out for a while because I love the slightly Chinoiserie look of the design (and if it’s good enough for Michelle Adams, it’s good enough for me). 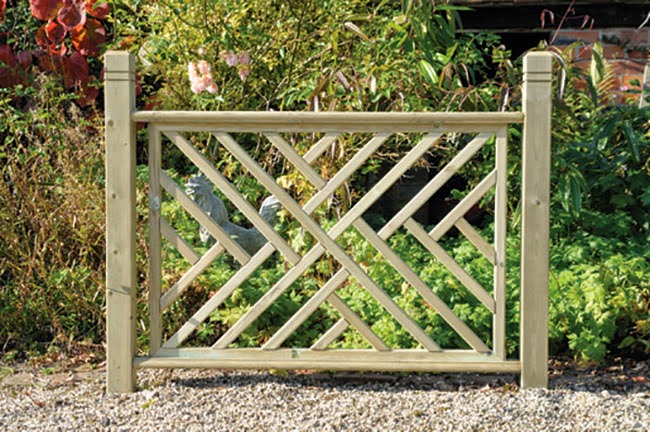 In terms of the furniture, I want to have a dining area and a seating area so I’m on the lookout for few bits that are nice and affordable (end of summer sales perhaps?). While the new white bench will definitely stay, I’m not so sure about everything else. We shall see! 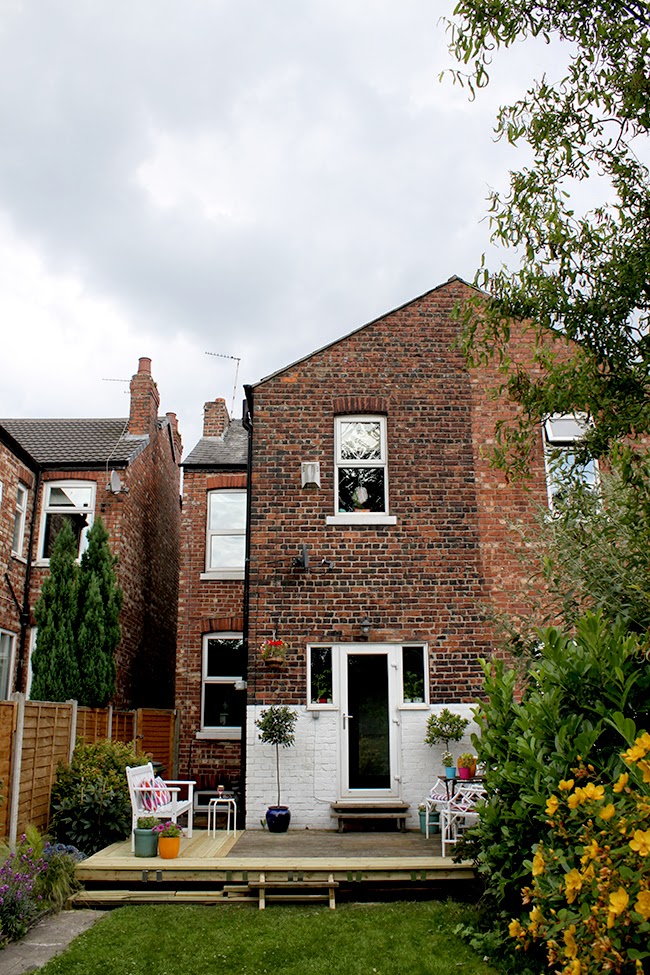 In the meantime, the decking is finally starting to take shape!!

So here’s what’s left to do:

Hopefully I’ll be able to share more with you soon.  What do you think of the progress so far?  Do any deck building lately?