Let’s talk about televisions… and my search for the perfect stand.

Before you get scared that this has turned into some kind of new Tech Talk column, let me reassure you that it’s nothing of the sort. But it does seem to me that whenever you see pictures of living rooms in magazines and online, the dreaded black box is rarely to be seen. 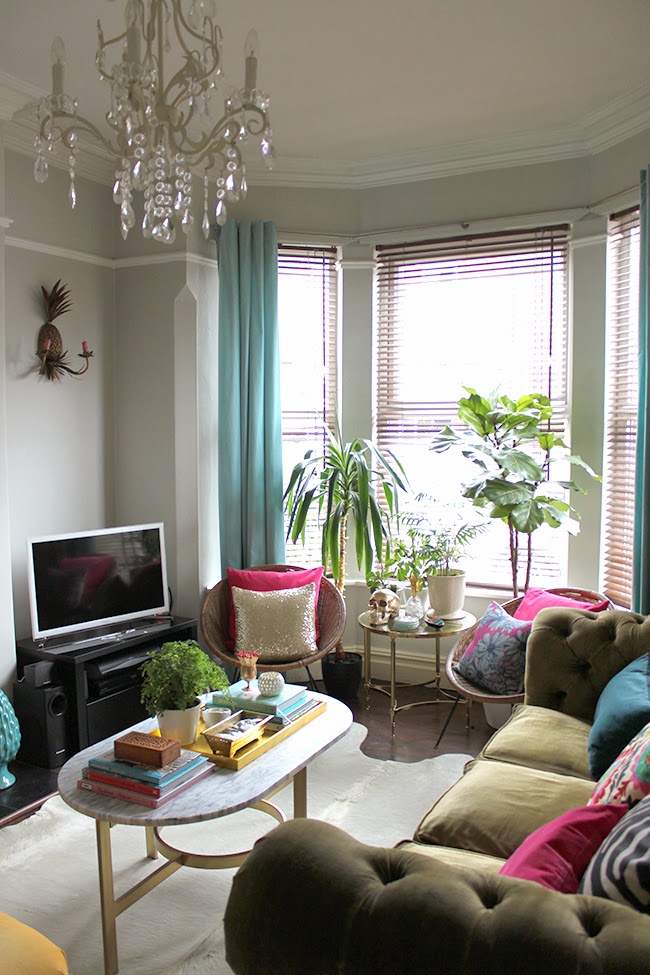 To be honest, it’s understandable – televisions are fugly creatures. They are big black boxes that generally add very little stylistically to a space unless you are going for a really contemporary masculine vibe. Otherwise, what do we try to do? Hide them. Create gallery walls around them to make them less conspicuous (hello, my dining room), we cleverly put art work in front of them that slide away to reveal the TV behind, we hide them in huge cabinets, create dedicated rooms for them, generally make them go away.
But the truth is, we live in an age where the television has become smarter, more necessary (ok, some might argue with that) and a bigger part of our lives. I admit, we like our television. Curling up with a film on a Saturday night with a few cocktails is practically a given in the Swoon Worthy household (we are old and the lure of a night on the tiles, stumbling in at 3am with a hangover that lasts days, no longer really appeals at our age – this is what happens to most of us and if it hasn’t happened to you yet, give it time).
While I have shown off the television in our living room a few times, it’s a problem that needs to be addressed.  We have taken the first small baby step to making it blend in better with our space – we finally purchased a white one.  But what I can’t seem to find is a replacement for the mega-contemporary black stand it sits upon. 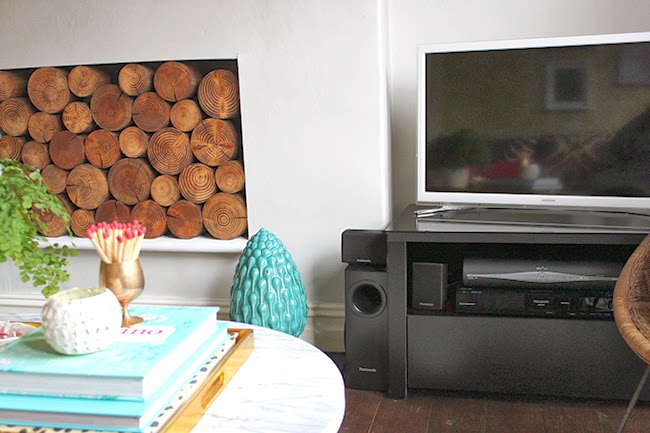 I hate that stand. I hate it with the white hot heat of a thousand suns.  Long ago, when the living room design was still in it’s infancy we purchased it to go along with all the other darker items in the room and it seemed to work … but as the style around it became bright and lighter, that corner just became a light sucker-outer. 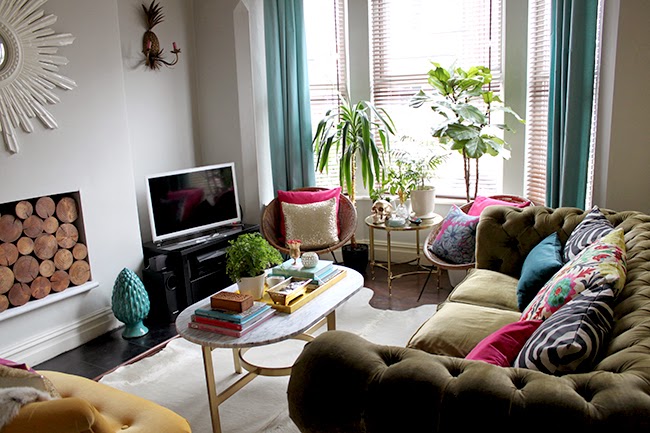 I think the white television is a good first step despite Wayne’s initial protestations, “You do realise when the television is off, it’ll still be black??”  Yes, yes, I know, but it’s a SMALLER black box than it would be. At least he’s not insisted on a huge 50″ for here (he’s got one downstairs in the mancave, thankfully) so there’s that too. What you need to know about Wayne however is he is a man that LOVES his tech. So giving him the green light to buy new techie stuff keeps him very happy.  Therefore, it wasn’t too difficult to convince him the living room would look better for it. We ended up giving our old telly to his family and the new telly arrived in all it’s shiny white glory.
The stand however, is still giving me nightmares.  What I would love is something a bit vintage and in wood. Or perhaps something I could paint in white with little gold handles.  I would love a vintage cabinet but my searches have all drawn up short so far.  I’m starting to get desperate.

The offerings for television stands in the retail world are frightening. Like, seriously ugly or super contemporary (which just isn’t my bag).  Just say no, people, for all that is good and glorious in the world. 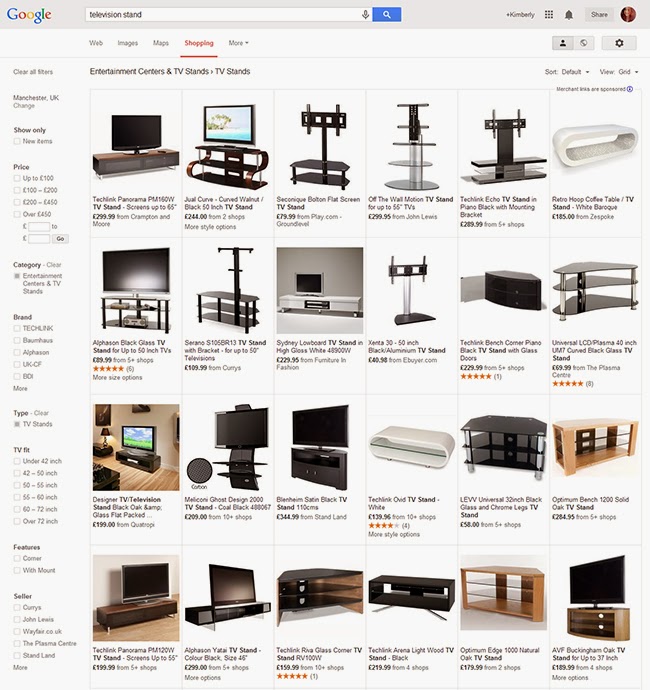 A built in cupboard has been suggested and it’s something we’re considering but I think if we did a built in on this side and not the other, it might make the room look a bit unbalanced. 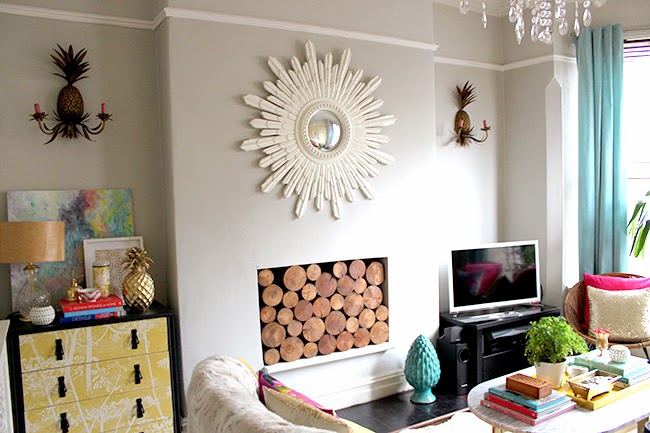 Whatever I put there has to work with the chest of drawers on the other side. And this is where the decorating domino effect comes in.  If I do go with something in white on the right hand side, I may end up painting the black portion of the chest of drawers white as well and replacing the handles.  At the moment, they sort of balance each other but they appear incongruent to the rest of the space.
The other issue – and my major stumbling block in finding something vintage – is that it must fit the size of the alcove. It’s a mere 90cm across and most of the cabinets I like are at least 1 metre wide.  Or they are pitifully tiny.  It also needs to have cabinet doors that can open so that we can use the dvd/sky box etc that sit beneath it.

I’ve already suggested that Wayne might need to build me a cabinet but he’s got a list as long as his arm with stuff we need to get on with so I might be waiting quite a while on that one.
Until that time, that horrible stand remains and the search continues…
Is there something in your home that you are searching for but just can’t seem to find? How do you deal with the television in your living space? Do you hide it or do you figure, it is what it is?
Don’t miss a thing!
Follow Swoon Worthy on Bloglovin’